The Universal Exhibitions, among other things, served to publicize the new architectural materials. Different states in organizing these events and they showed their progress in science and technology. Usually housed elements requiring large spaces for exhibition so to build many of these new advanced technical means were used, looking for maximum functionality.

The major changes in the architecture, driven by advances of the industrial revolution, are mainly based on new building materials, iron, rolled steel, reinforced concrete or glass. With these functional spaces that need the new capitalist industrial society, large warehouses, factories, bridges, markets will be built.

Among the Universal Exhibitions raised for these buildings, which best expose the ” new architecture ” iron are Crystal Palace of Patxon, Gallery of Machines and Dutert Contamines and Eiffel Tower of Gustave Eiffel. In Spain these iron structures were first used in railway stations, as in the case of The Atocha station in Madrid, Alberto Palacio or following the example of the great Exhibition in the Crystal Palace of the Retiro.

The Crystal Palace is located in the heart of the Retiro Park, in the heart of Madrid, on the banks of an artificial lake where there is a ladder that is submerged and in which can find several copies of Cypress Swamp, with part of its trunk and roots underwater.

The park covers about 130 acres with a variety of more than 15,000 trees. It has numerous entries in the street or on the Alcalá street O’Donnell, placing the principal in Independence Square. The nearest underground stations are Retiro and Bank of Spain.

For the construction of the Glass Pavilion were needed five months and the architect Ricardo Velázquez Bosco was inspired by the Crystal Palace London built in 1851 on the occasion of the first Great Exhibition.

It was built as a greenhouse to house the stove displays of exotic plants brought to the Philippine General Exposition, held in Madrid in 1887, from that country then still a Spanish colony. Finished sample the Ministry of Development decided to retain the building became part of the Ministry of Culture, the space devoted to temporary exhibitions of Centro de Arte Reina Sofía National Museum.

The structure is metallic except tetrástilo entrance portico, single building solid element, configured by a colonnade of Ionic order on basement accessed by a wide granite steps.

The section is a basilica with a taller and wider central body flanked by two lower side aisles which act as buttresses. Its structure is fully forged metal coated glass plates, creating a transparent architectural space and becoming an example of what was the beginning of the iron architecture in Spain and the introduction of prefabricated elements in the construction process. It has a floor to ceiling colonnade more entablature, with a staff of three arms.

In the glass that covers the entire facade was created with masonry arches with ornate ceramic coated. It was built in less than five months, with a prefabricated structure made by the manufacturer Bernardo Asin, structural design and calculations engineer Alberto de Palacio. 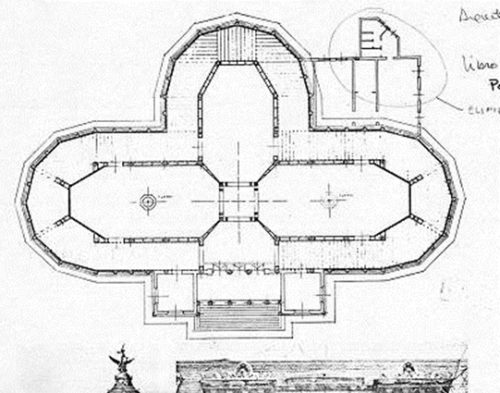 Its plant in the form of a Greek cross is inspired by the head of a Gothic church, an apse, two arms and an ambulatory to ambulatory mode, topped by a glazed cloister dome and four cloths, reaching 22.60 meters high and protruding from other covers made ​​with barrel vaults. Divided into three aisles and a central, all are surrounded by walls and glass ceilings.

The fourth arm of the cross was removed to create the entrance portico of the Ionic order. The portico of Greek classic taste and style, opens to a terrace surrounded by balustrade facing the lake. The landscape includes intervention around the lake with a central fountain that the water rises to 4 meters high, rockery grotto with waterfall and a jetty subsequently disappeared.

In the central room was built a pylon designed to aquatic plants from exposure. The aisles, with 14.61 meters elevation, kept the lower species. This unique building 54 meters long and 28 wide rests on a brick base with a frieze decorated ceramic coating the few blind parameter set and sockets 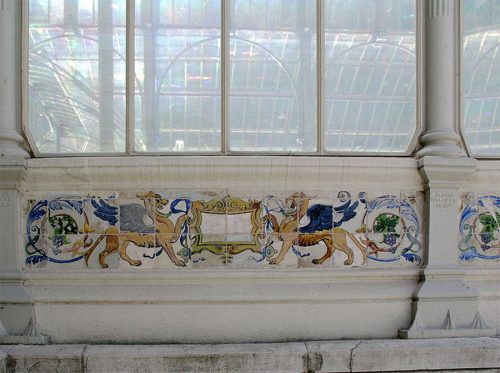 Iron Ionic columns supporting the crystal structure of the roof, on a platform made ​​of stone and brick was used. It was the first time in Spain the iron and glass were used in a non-industrial building. Accompanying the wrought iron structure of cast iron parts are, as the faces of angels that adorn the upper ledge and they support the gutters for rainwater. The porch columns are made of stone on a base of concrete and granite steps.

The tiles that decorate the entire perimeter of the palace are the work of ceramicist Daniel Zuloaga, decorated with dragons, stars or flowers.

In 1975, the first restoration, by Angeles Hernandez -Rubio, eliminated improper additions, such as a store of brick house in the back, said lost items or blinded and returned to the structure as originally conceived, allowing use as living exhibitions.