Today the universal exhibitions are often considered as an excuse for a city to receive certain funds and aid to renew its image and face the world, becoming for a few weeks in limelight internationally.

However the origin of the universal expositions was another slightly different. The event, which for much of its history, and especially during the nineteenth century was considered an event, was the place where the great military powers could go to showcase the products, animals, and even people of those exotic places they had conquered in distant lands in recent years. In an imperialist era where the power of a nation is measured by the number of colonies that had universal expositions were a show of power to all the citizens of the upper classes went to watch the latest discoveries made ​​by overseas campaigns and new purchases of their nation.

The architecture for its part always been used as a symbol of power for the richest people and nations, so universal expositions became the perfect showcase to show the world, not only the state of the colonies, but also the most innovative and daring architecture of the host country was capable of. The result of this work arose historically context as relevant as the Eiffel Tower to Paris or in this case the Crystal Palace in London.

The Crystal Palace was commissioned to host the first major World’s Fair. The competition for the 245 project proposals resulted in no winner presented by its infeasibility. The organization was no time to react and decided to open an auction between the builders of the city to develop a simple and durable building that could be built within the required timeframe. Because the bid had already been closed and awarded to the Fox and Henderson Paxton contractors had to partner with these to carry out the project that finally ended in a period of 9 months.

During the Crystal Palace Exhibition meet expectations widely pass inside watching more than 6 million visitors. It was later used for similar events for 60 years, becoming what today might be called a “Fair”. It was also at the Crystal Palace in 1910 where King George V of England was crowned. Later, during World War II, the site was converted into the Royal Navy, theoretical training center for troops. From then until 1936, when a fire eventually collapse it, the structure fell into disuse and was already noticeable deterioration.

The original site of the Crystal Palace was the well-known central London ‘s Hyde Park. It was there where he built and served its original purpose, to host the 1851 Universal Exposition.

Later however, in 1854, was dismantled and moved to the area south of London known as Upper Norwood. Taking advantage of the shuttle was slightly modified the original design, expanding its capacity. It was in Upper Norwood where it remained until its destruction by fire in 1936.

The concept behind the project is directly influenced by the extensive experience that had Joseph Paxton as a designer and builder of greenhouses is based. Paxton had worked for years as a gardener at Chatsworth Gardens service of the Duke of Devonshire. There he was able to experiment with the construction of large greenhouses with glass and iron structure acquiring knowledge and experience that is directly transferred to Crystal Palace.

The concept of greenhouse not only proved most appropriate for the better preservation of the imported material much warmer as latitudes were the colonies, but they also marked a before and after to disrupt concepts as basic and settled as privacy or robustness.
Historically the most important buildings had been marked by a powerful and heavy fruit design limitations of the stone image. The stone was a symbol of power, quality and durability, as opposed to other materials such as wood, lighter but also more fleeting and perishable.

The structure of iron and glass Crystal Palace seemed to be floating in the air in the eyes of the spectators. It was a gigantic structure as there were few at the time, and all she seemed to be constantly on the verge of collapse due to its slender frame and fragile walls. But working in a building of power, the latest technology of the empire, a guarantee that no one hesitated to take, at least give a chance to this new architecture, or be a failure or become a pioneer of a new era.

Its glass walls quickly became a work of living art painters and poets were quick to capture in paintings and verse. The glass was transparent material allowing see through it, but under the influence of the rays of the sun you could only see his own reflection in, staying inside an enigma. The experience from the outside was completely different, the feeling of being seen even knowing that many times was invisible inside the park for walkers. In the nineteenth century where privacy was a much more precious than it can be in the twenty-first century, this experience was a challenge for society, which accepted it quickly, even enthusiastically, as a divertimento more than face value to life social city. 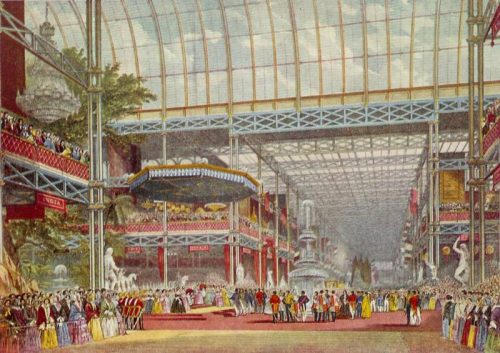 From the outside the building is perceived as an imposing structure 600 meters long by 120 wide and 34 high.

Inside the space was continuous and uninterrupted. A large central hallway acted as a principal axis on both sides harboring different goods exposure. A line parallel to the main side aisles allow visitors to delve a little more research on those objects especially BIDDEN attention.

The program was divided into two floors, the second much less surface area because it had a large open central space hovering over the main axis of the ground floor.

From inside the Crystal Palace certainly was in his time the most luminous building that the public had never been able to access since both seem as ceilings were made of glass, allowing light to flow freely into, sometimes even somewhat excessive and uncontrolled. 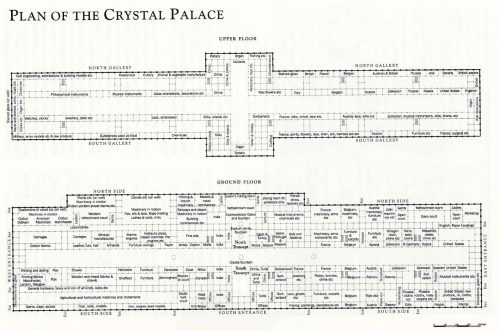 Crystal Palace structure revolutionary became not only by its size and concept, but also be integrally made ​​of standardized, modular material.

The supporting structure is made ​​entirely of cast iron and wrought iron as it was back then with the metal industry was more familiar.

A series of rows of pillars lined up on the perimeter generating porches giving stability to the assembly. Between the two families of frames the main axis of the enclosure, which was crowned by a monumental barrel vault 600 meters long stretched.
In construction could also be seen the first lattice beams designed to minimize weight and ensuring its resistance to be used to generate the various slabs.

The figures achieved during the construction of this structure were truly amazing :