When the monument was built was highest in the world, with 300 meters high (if the amount of radio antenna that is at its peak, its height is 324 meters). When built, the tower weighs about 7,300 tons, while today it is estimated his weight at more than 10,000 (due to the museum, restaurants, stores and shops that hosts). It was expected that the tower reaches 350 meters in height, but the neighbors were alarmed by the threat of a building as tall and built with little stones could fall off, and marched, causing a change in plans. The 24 meters last fall to a radio antenna that was added much later.

In the first decade of s. XX, Parisians showed their displeasure with Torre, who came to the point that the government gave the order for demolition. But his great and powerful antenna saved from destruction because it was receiving radio waves in Germany, in World War I, which served as a great help to the allies.

Because of the proximity of the river and the nature of the subsoil has its foundations in each of its four support, a depth of about thirty meters. Each of its four legs resting on eight hydraulic jacks so you can actually consider that the tower is 32 feet.

It is believed that approximately half of the unions with which the structure (by rivet) are made for safety reasons, namely that the tower would remain standing but failed half of the joints between their parts. This ensured from the outset the reliability of the Tower, given that at the time of its construction many Parisians were afraid that he might fall off causing a catastrophe.

The colossal structure, formed among others, 18,000 pieces of angle profiles, flat irons and special profiles T, had a length of 5 meters and precision manufacture of the tenth of a millimeter, who joined with 2.5 million rivets.

A third of the entire structure was put together in pre-workshop and the rest, eventually joined as a gigantic mechanism in the work, with the help of about 300 workers.

According to the ambient temperature, the top of the Eiffel Tower can zoom in or out of the ground about 18 centimeters, due to thermal expansion of the metal that composes.

Wrought iron (Pudel) erected in the form of 18,038 pieces Entrecruzadas set by 2,500,000 rivets. The structure of the masterpiece of Gustave Eiffel was very aerated and the robustness of their materials, their weight is 7,300 hue.

The iron Pudel, unlike steel, was obtained by shaking in the oven, iron and slag, increasing oxidation and becoming more viscous iron. It was well produced, a material that was approaching the composition of the steel, which could then laminated hot. 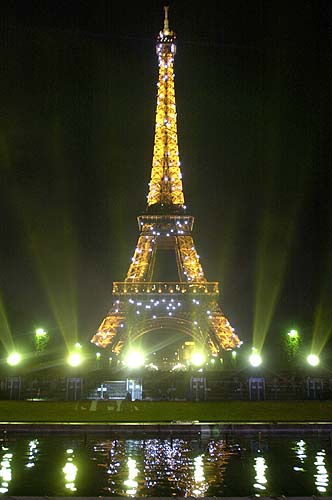 To give more life and elegance to the tower, 4 reflectors with xenon lights of 6,000 watts that rotate so permantente at the summit.

In addition to the illumination of the Eiffel Tower normal that on a clear day is visible from 80km away, the Tower has a particularly striking and bright lights, after nightfall, during the first 10 minutes of each hour (until 2 am normally, and until 1 a.m. in winter) light up thousands of twinkling bulbs that give the Eiffel Tower a more magical even if it’s that it has in itself.

If we can get in an elevator from the base of the Eiffel Tower to its second plant, located to “solo” 115 meters high, and if we are brave enough we can get there it will take another elevator to the top of the Eiffel Tower, to 276 meters high or more, no less (there are facilities for a little above where you can upload the public, but of course access to these facilities is closed to visitors).

If you climb on foot can only go up to the second floor.

The Jules Verne is one of the best restaurants not only in Paris, but if we talk about all of France. This is a restaurant keeper of a star from the Michelin Guide, which is located on the second floor of the Eiffel Tower, and whose customers can access the restaurant via a private elevator to avoid having to queue up with others visitors. Private access to the restaurant is located in the South Pillar of the tower.