Van Berkel and Bos have used in their designs and architectural computing technology combining with fragmentation, reassembly of deformation and geometric shapes that characterize their designs.
This feature is applied both solitary buildings like Villa NM, urban, Mercedes Benz Museum or continuous spaces, Water Villas. UNStudio does not tell us the space in which the project is developed, the reason for which it was built or for whom. Instead offer architecture, a quality that allows us to appreciate his work as something different, much more than the sum of its parts.

People who commissioned the project UNStudio saw the Moebius House at MoMa exhibition “The un-private house” and were attracted by the idea of living in an experiment. Villa NM was conceived and built as a futuristic shelter weekend and holidays, a place of rest than a year after its completion in 2008 was devastated by fire.

Villa NM was built on a plot of 7.423m2, with a 360º view into the woods and meadows of the plateaus of the Catskill Mountains, within the State of New York, United States, approximately 164 km from the city of New York.

The property is a modern version of the duplex built in California during the 50s, with no hierarchical differentiation between public and private spaces. It becomes an efficient deviation of the characteristics of a traditional residence: while the smaller facades make it appear as a modern and modest nature, the long side walls of concrete deformations make it visible and different, rising like an abstraction in the surrounding landscape.

Villa NM part of the idea of ​​a box which applies a rotation center to lead two different volumes and different level, taking advantage of the slope smooth.

In the design of this outstanding family house is used as a device for a pragmatic and volumetric organization. The volume of a box that splits into two separate volumes, one follows the northern slope smoothly and the other rises over the hill leading to a covered parking and generating an internal organization at two levels. The volumetric transition is generated by five parallel walls that rotate about a horizontal axis from vertical to horizontal. The resulting surface, keeping this transition is repeated five times in the building.

From the inside, the huge windows bands ranging from floor to ceiling allow a fluid Continue between the inside and from the outside landscape and the reflective glass blends with the environment, becoming part of it

While the southern elevation brings to mind the Farnsworth House of Mies van der Rohe or Glass House of Philip Johnson, its midsection curve makes this villa becomes a “box” with a touch that unlike architecturally called “box on a rock”. The unique integration of these modules created, the branch, two separate volumes, one clinging to the north side, another separating from below the ground to allow the creation of a covered parking.

Structurally Villa NM was a challenge to have to adapt their sinuous forms the uneven terrain, despite the cubic and rectangular volumes. To join the geometric volumes of prefabricated structures, was used to ramps that allow circulation areas between different spaces.

With a surface of 250 m2 house uses the right angle in the outer shell, a shell composed of rectangles and squares. The interior was conceived as an exercise in organic forms.

On the lower level parking, dining room and the kitchen, which leads to the house, common feature in some suburban homes are located. A ramp staircase connects the kitchen and dining room with lounge upstairs. Through the staircase leads to the first floor around it in a spiral, becoming the focal point of transit areas and ceilings of the intermediate and upper floor.

One of the distinctive spaces of Villa NM is its great hall, which due to the change of height above the ground floor, 1.5 meters and its floor to ceiling windows on two sides allows a wonderful view over the valley, while on the other it opens to the pool. The living room has attached a guest room on its east side. The fireplace wall represents the only visual barrier.

Following the spiral path of the house reaches the top level suite, which overhangs the parking and resting on V-shaped columns and two other bedrooms. Rooms that require privacy are partially closed to the outside, all the others have large bay windows.

The vertical axis houses the house infrastructure, transit, kitchen, bathrooms, fireplace, as in a traditional residence, allowing the release of the walls, but to get to the lounge area is as if the architects had this space extruded from the heart of the house trying to make it reach the landscape, based on the popular appeal of Wright “break the bucket” in suburban houses and replacing it with the slogan “deform the cube” to get the same result.

The realization of the design is a combination of concrete and glass with a light metal frame. The intelligent transformation of a geometric shape and standardization of structural elements allowed the economic production of a very personal building strong spatial qualities.

The bronze tinted windows allowed day the landscape is reflected in the windows melting large geometric volumes with the colors of the forest. At night these same crystals caught glimpses inside the house.
The bathroom walls were covered with marble. In the living room dark and covered with copper, fireplace gives a point of contrast in the fluidity of clear forms that dominate the interior of the house 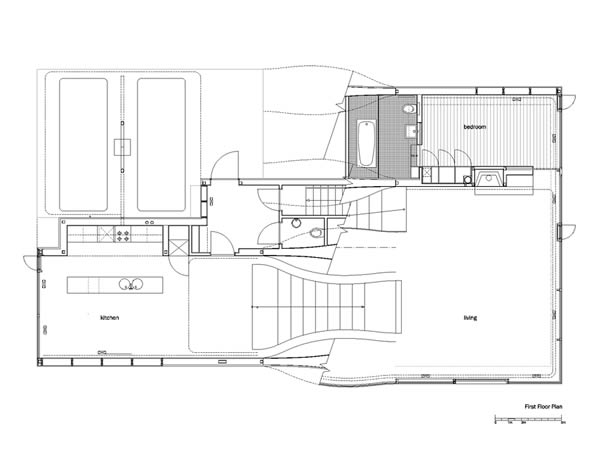 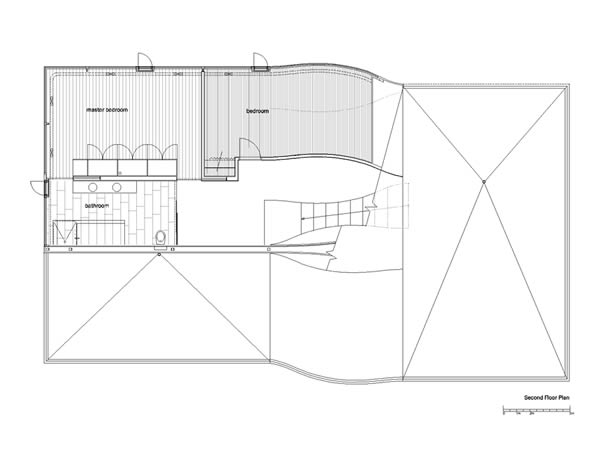 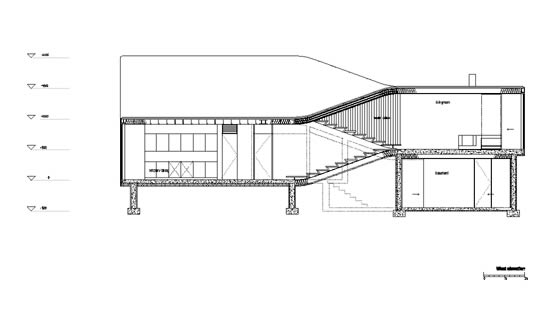 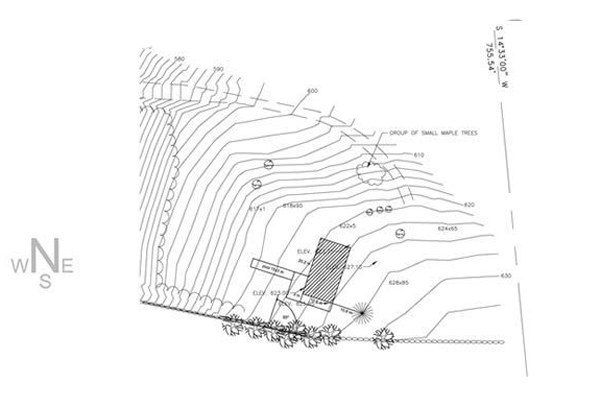 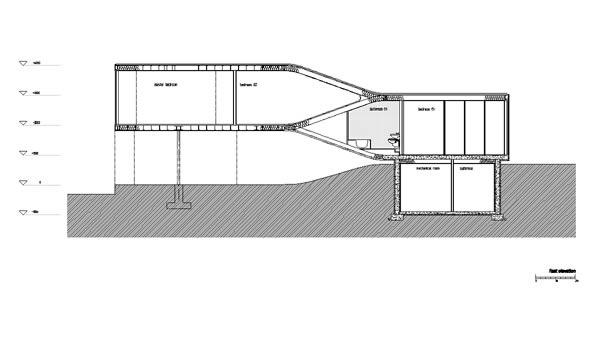 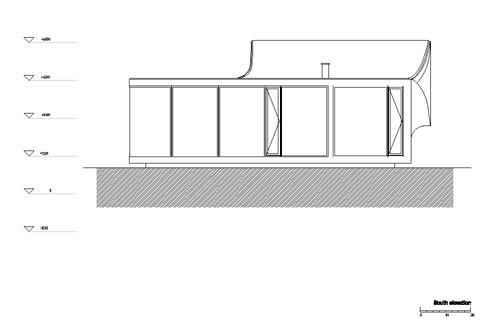 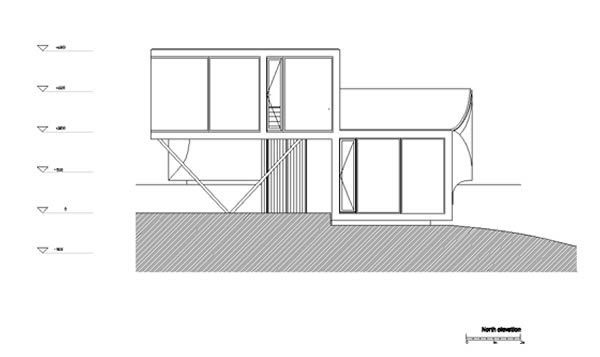 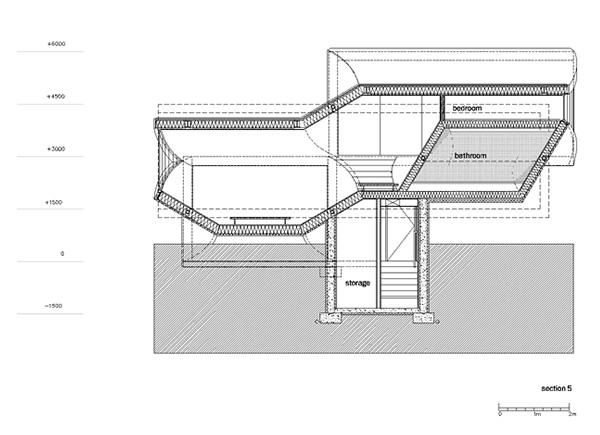 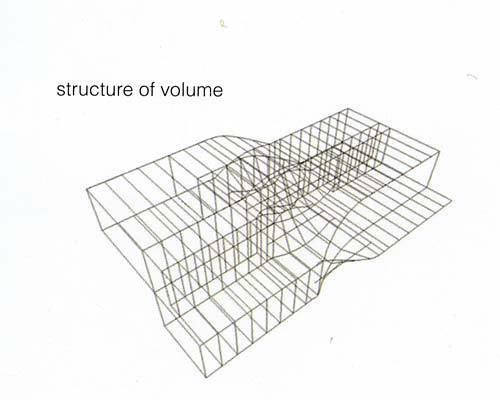 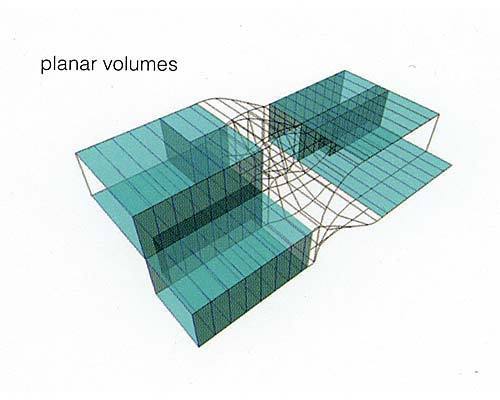 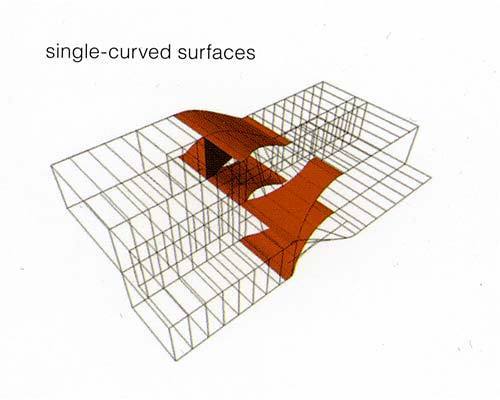 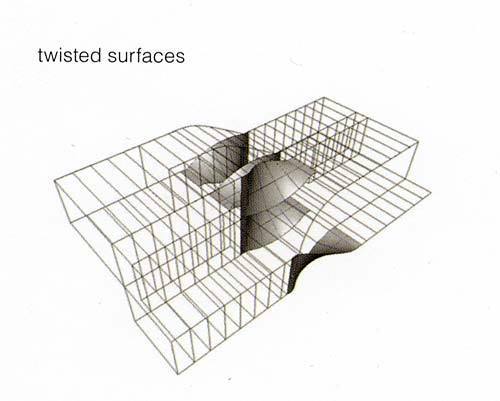 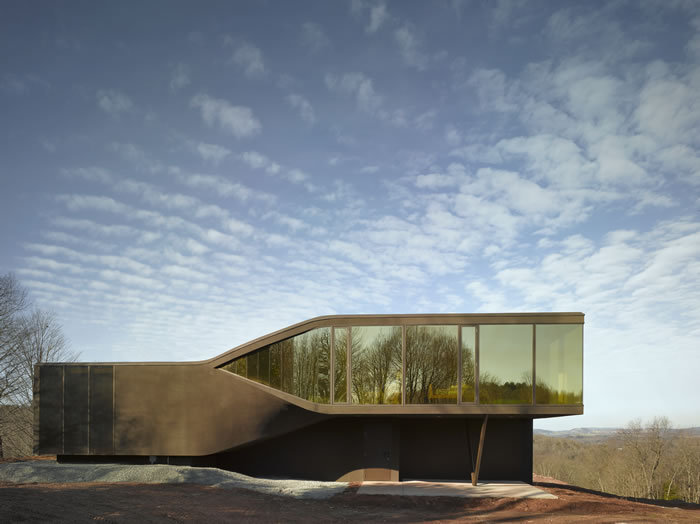 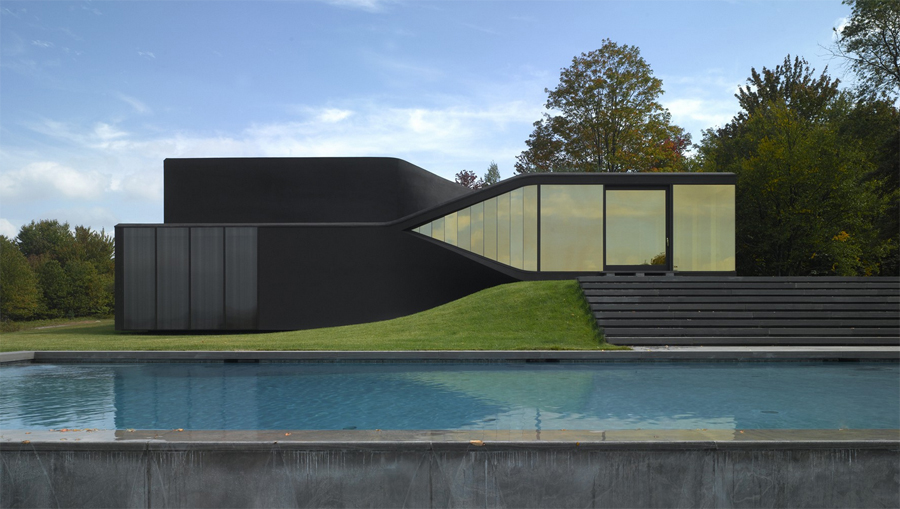 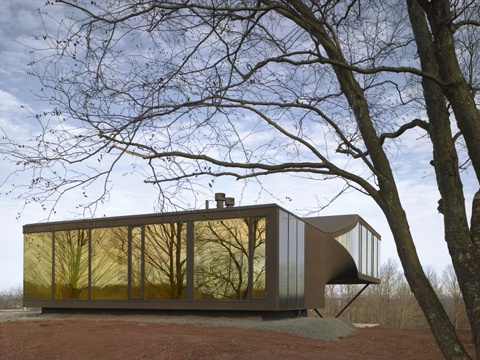 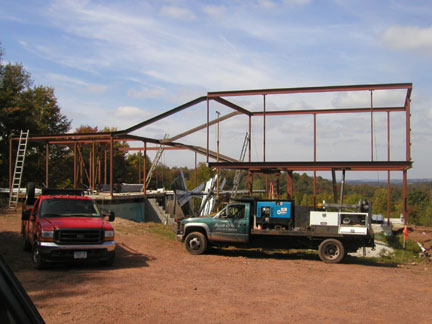 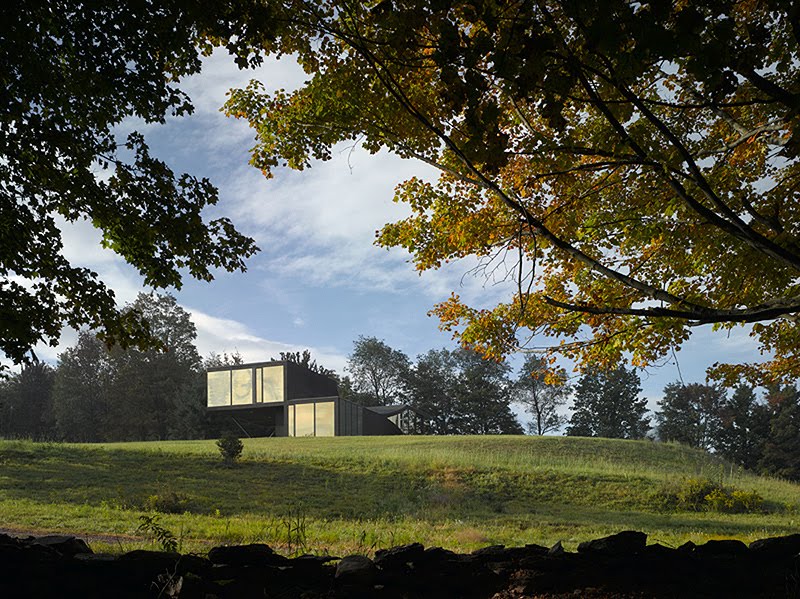 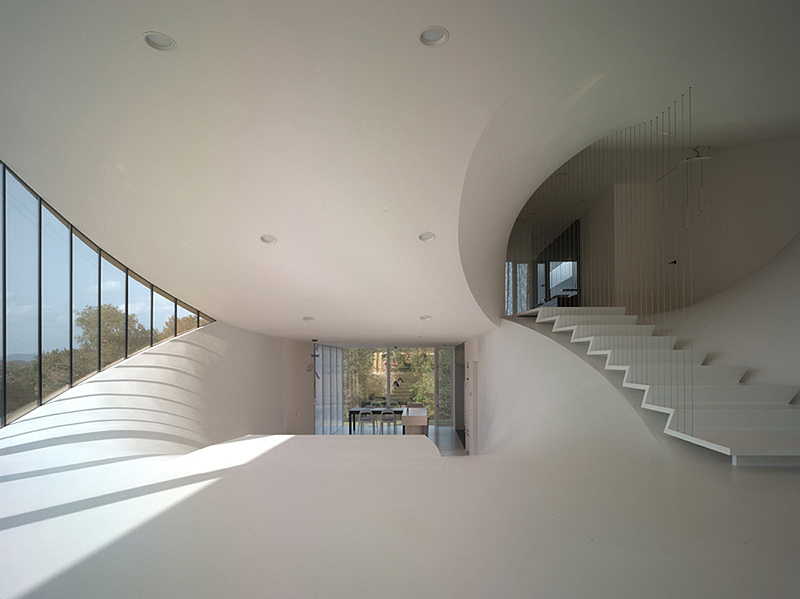 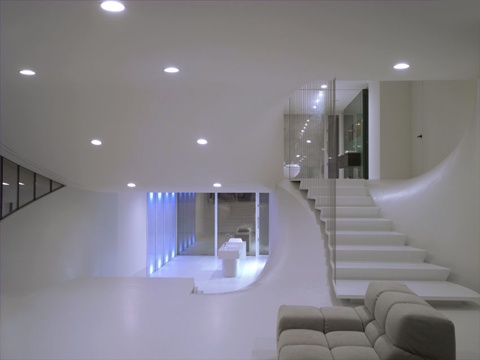 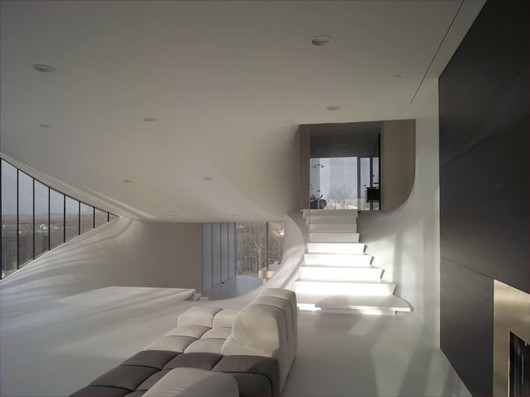 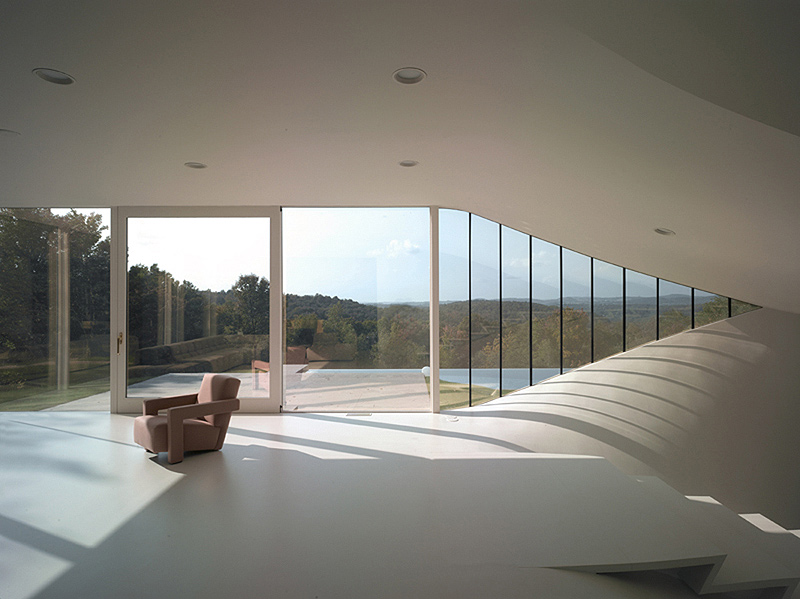 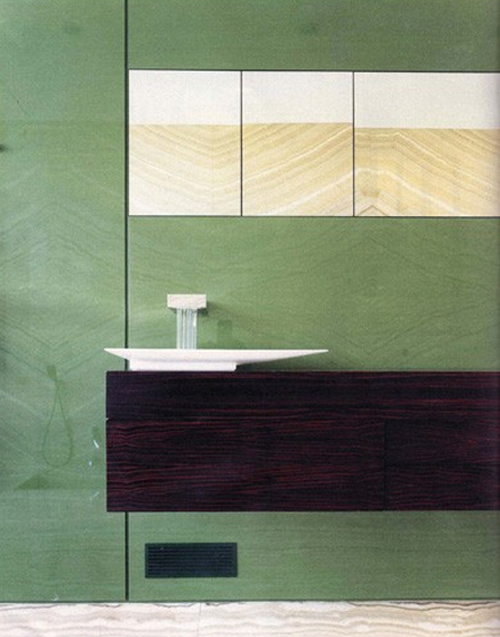 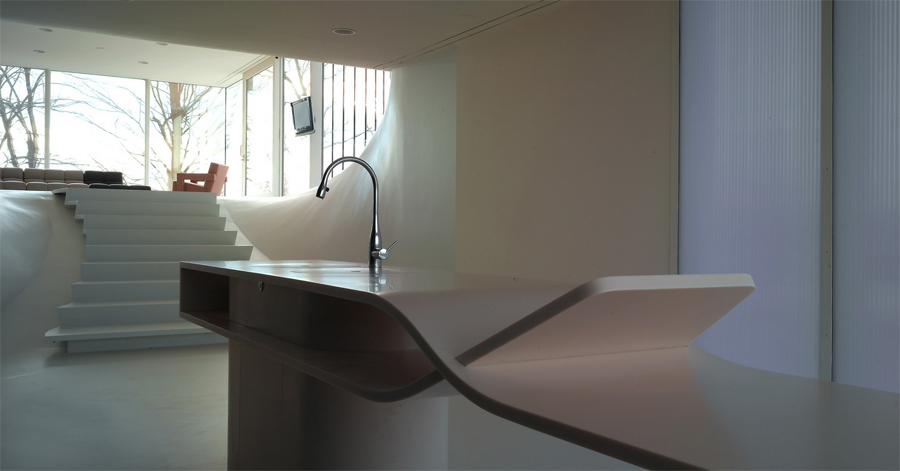 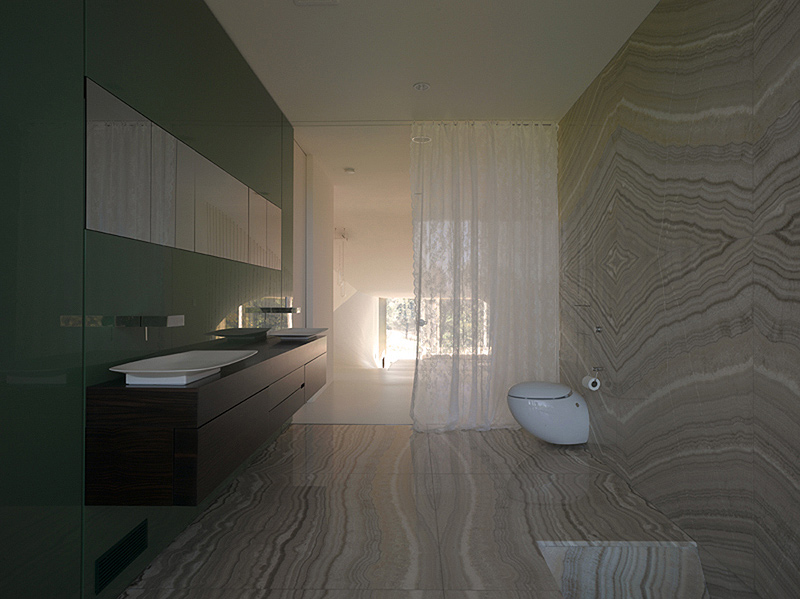 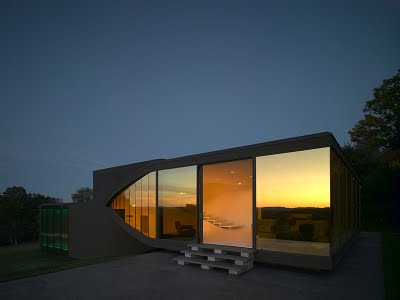 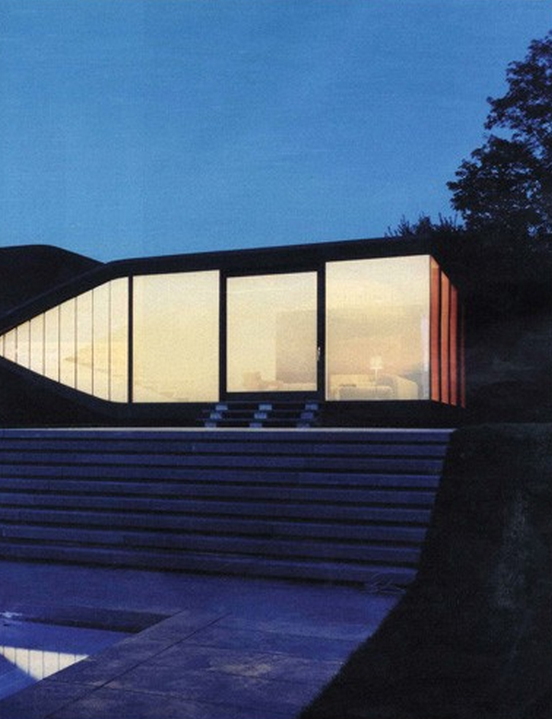 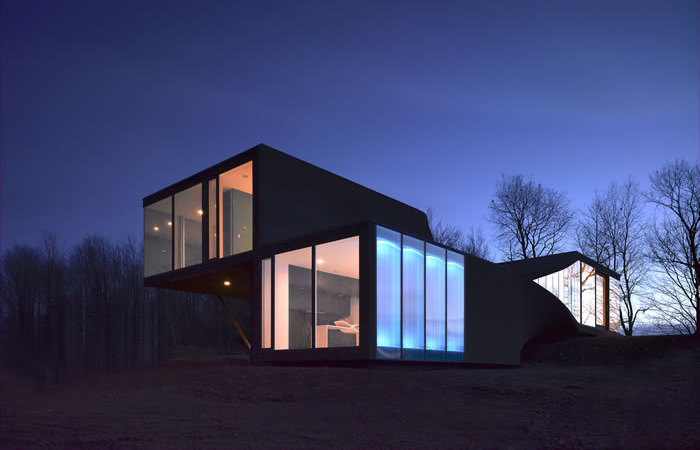