One study, the team led by Dutch architecture Ben van Berkel, Caroline Bos and Tobias Walliser, was responsible for the design of the new car museum in Stuttgart. The building was constructed in record time, two and a half years, as Mercedes-Benz did not want to let go of the chance to be ready to begin building before the World Cup in Germany.

The building was among the seven finalists for the Mies van der Rohe in 2006 and quickly became an icon of the city.

Played here 120 years of history of the automobile and the Mercedes-Benz, and is complete with interesting prospects for the future. This principle is reflected in the design of the building. The impressive modern building seems to come in the future, while retaining its link with tradition. The architecture embodies the legacy of the mark. The exhibition also reflects a unique and innovative concept: nine planes with a total area of 16,500 square meters give shelter to 160 vehicles and over 1,500 objects, spread over two rounds. The proximity of the main plant of Mercedes-Benz in Stuttgart-Untertürkheim establishes the link between tradition and the present.

The building marks the entrance of Stuttgart, from the highway B14 over the stands. Located next to the factory of the consortium in the city and the Gottlieb Daimler stadium, where he held several World Cup matches in 2006.

The geometry of the building is developed from a symmetrical three-leaf plant, evoking the DNA helix that holds the human genetic code. The metaphor refers to information that keeps to himself: on the one hand, the legacy of the Mercedes-Benz and on the other side in a constructive way to the clover that is the spiral shape of two interlocking ramps 80 meters long, with no stairs, and to serve as main routes for visitors traveling, referring to the Guggenheim and Pompidou Wright Piano.

The interior is the kingdom of the curve and the fold: concrete folds and gently dividing lines ceilings, walls and floors are diluted by creating a unique feeling of spaciousness and fluid. Mimic movement routes crossing the roads B14 and B10 that take visitors to the museum.

The two cross paths continually imitating bands of interconnected helix of DNA, allowing the visitor to move between them.

The building held a dialogue with the crisp cityscape that surrounds it (the football stadium, the test track and the center itself, the gas and oil tanks near the river, and the green hills of vineyards). From the outside, it seems a curve over the highway, clearly working well as a new gateway to the city.

As original as the building is the pedagogical design of the exhibition, outlined, developed, and the study conducted by HG Merz. During the last two hours minimum to visit the museum, visitors on a journey through time, allowing them to celebrate the 120 years of history of the automobile. There are two routes, called “Myths” and “Collections. These are independent, but allow visitors to spend any time in each other.

Upon arrival, you can access a wide esplanade with steps and an outdoor plaza of granite, where premium and the idea of movement.

Even before visitors entering the museum welcomes a selection of Mercedes-Benz cars from previous generations with a spectacular lighting adorning the underground parking. This is a separate exhibition called “Fascination technique” which is accessible from the outside. In several scenes, composed with great profusion of details, visitors can take a look at the daily work of engineers from the departments of development of Mercedes-Benz, including perspectives on the future of the automobile. The classic cars are the reception committee of the museum, spread over the vehicles of customers. The direct link with the local exposure of the Mercedes-Benz Center Stuttgart guaranteed the continuation of Mercedes myth from the historical models and vintage to current products. Through an escalator from the parking will go to the reception.

Already in receipt of the museum, visitors pass along an information desk, which is a ring with 16 plasma screens suspended and come to the atrium, where for the first time we can see the museum. To reach the upper level with three elevators that reaches a height of 42 meters.

“Myths” is a chronological journey through the history of the automobile since its invention to the present. The seven rooms in which is united by a ramp 80 meters long. The ramp, alternating with flat sections, allowing access for all people.

With the exception of the first and last room of the route, which respectively, to the invention of the automobile and the history of sports competition, the composition of the rooms due to a uniform pattern: the ramp covers a broad arc of the exterior wall a leaf clover core section and leads to the visitors from the vehicles, which are the center of each scene.

The second tour of the museum reflects a different conception. Unlike the first, chronologically ordered, the “Collections” are classified by type of vehicle use.

Each collection has a room itself, with sufficient breadth of exposure to a large number of objects related to the theme throughout the history of the automobile.

At the ramps linking the path of the “myths” with each of the collections have been placed into glass display cases with both sides. A “micro” sample of a continuous film on the subject of the collection.

The two routes leading to the “Races and Records”: a broad curve peraltada occupying virtually all of the room ends in a cylindrical vertical wall of plants, which are suspended vehicles bearing legendary record speed.

At the center of the cylindrical space with the legendary vehicles are five platforms, which protrude from the lower floor level and intermediate remind valve engine. On these platforms are existing historic vehicles and prototypes. These objects establish a logical connection between the museum and the exhibition area “Fascination technique.”

The use of color and lighting are inside the museum. The saturated colors are confined to the centers of the elevators, the bathrooms and exits. The main rooms of the museum are neutral to ensure that the focus is on the objects. The wallpaper on the walls and surfaces of the soil are based on points as the only fabric design. This helps to unify and bring coherence to the entire building: the point evokes the circle, the geometric building paradigm as a whole.

As for lighting, is distinctive in the rooms and Legends Collection. Natural light works dramatically and omnipresent in the first. You just need the artificial light is used only to accentuate details and to direct the lights reflecting on the surfaces of cars. For this purpose a special Studio developed a roof with undulations that incorporate recessed lights, shaped like a bubble that can rotate to change their focus.
The treatment of light in the rooms is subtle and theater, designed by Ulrike Brandi, HG Merz for each area of the building. Highlighted particularly the Starry Sky, made with 76 Swarovski crystals hanging from the ceiling, and the third floor lamps, art deco style.

At night the museum is lit from the inside out so it does not require external projectors. In the distance, it appears a single large window that has the peculiarity of looking at people and be seen as inevitable and constant.

In the construction of the complex have been used over 110,000 tons of concrete. On the outside was used aluminum plates and glass. The ramps are covered with parquet wood cut from dark cap.

Glass and aluminum are wrapped around the concrete substructure inclined horizontal lines. The glass is treated as the front window and still support along the perimeter of the exhibition.

The windows are made of trapezoidal panels, vertical and diagonal whose boundaries are tailored to the profiles of steel. The glass is clear, colorless and insulation. On it was a stamping points BLUNTED reducing the impact of sunlight and is applied in all panels giving the impression of double dimensionality facade. The innovative glass fiber reinforced carbon helps maximize the delivery of the material. The use of sunlight allowed in the rooms are too large, a significant energy savings.

To make the complex shapes of the museum has been necessary to ultramodern technology. The basis for the planning of the building as a whole is a model of three-dimensional data, updated 50 times during the construction phase. We also carried out 35,000 flat work.

To Studio One, the demand could be met only geometric properties with reinforced concrete, are also a perfect backdrop for the exhibitions. The continuity that characterizes the winding internal movement is also the structural principle of the facade. The construction of the structure in the form of a cloverleaf leads the points where the roof becomes a wall and simultaneously closes the corner, connecting directly to the next exhibition space.

Among the museum include ceilings without pillars halls covering 33 meters wide and can bear the weight of ten trucks, like the double curvature of bearing elements: the so-called “Twists,” reminiscent of a propeller enormous.

Ventilation was in charge of climate engineer Matthias Schuler, along with Transsolar Energietechnik. The system is based on a principle of relocation. All ducts are integrated into three-dimensional curved structures, the units include two levels and climate are inserted into ducts that are housed in the ramp.

Within the floor panels are located electrical extractor out of fire and smoke out running parallel to the steel braces, minimizing the interference and intrusion into the space exhibition areas.

In case of damage, the smoke is kept away from areas with positive display. The smoke is piped out of the building by a fan through the roof. The central atrium acts as a chimney while providing light deep inside the building. 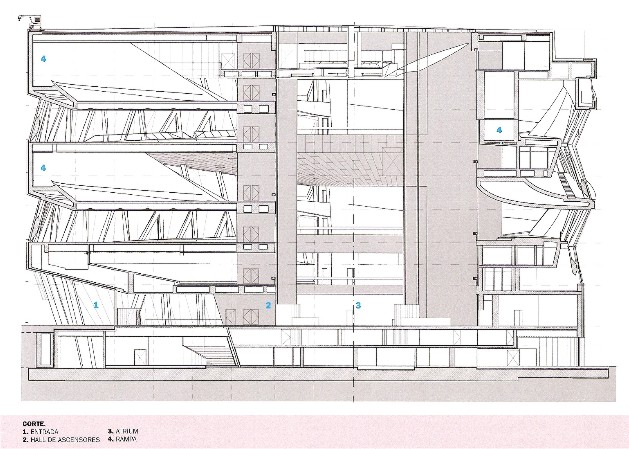 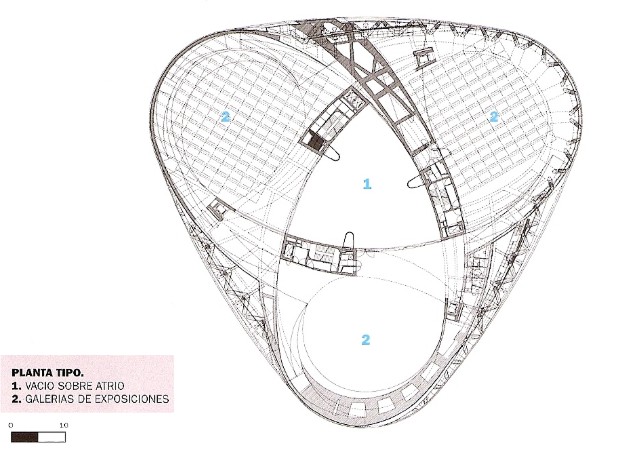 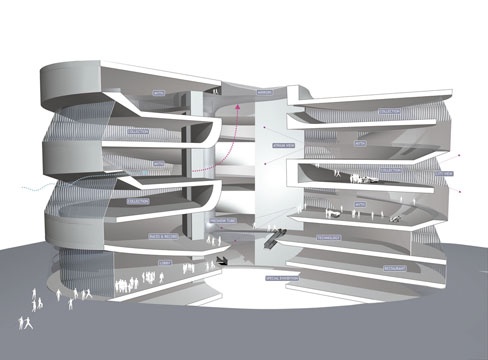 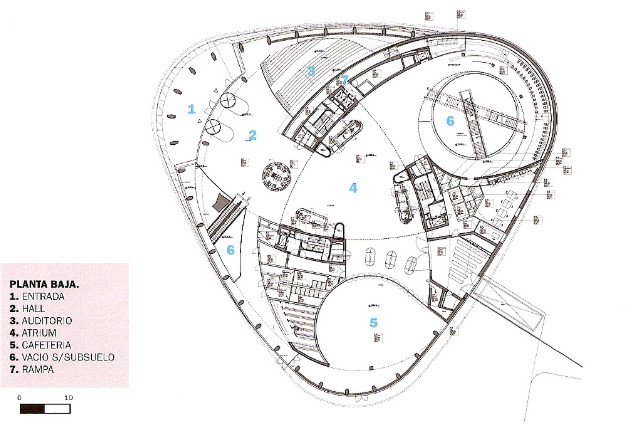 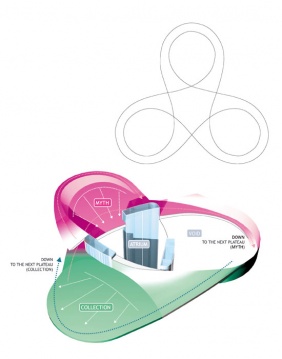 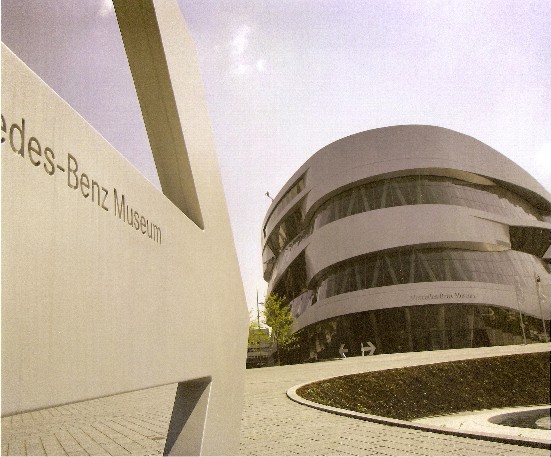 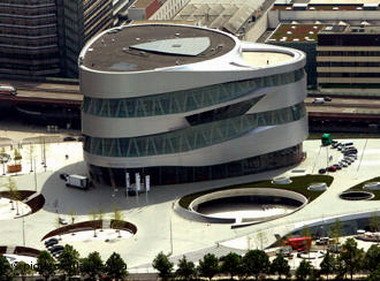 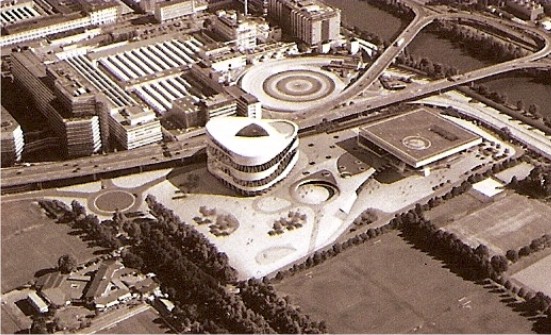 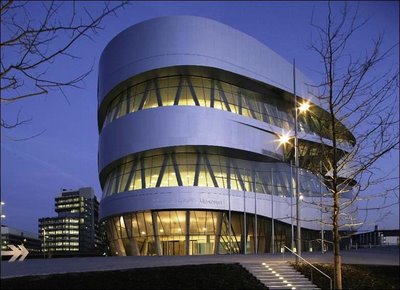 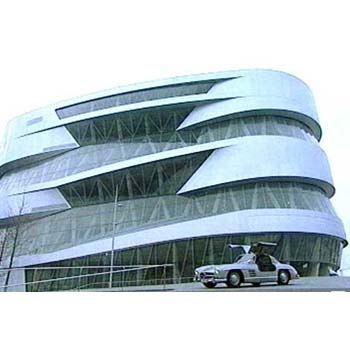 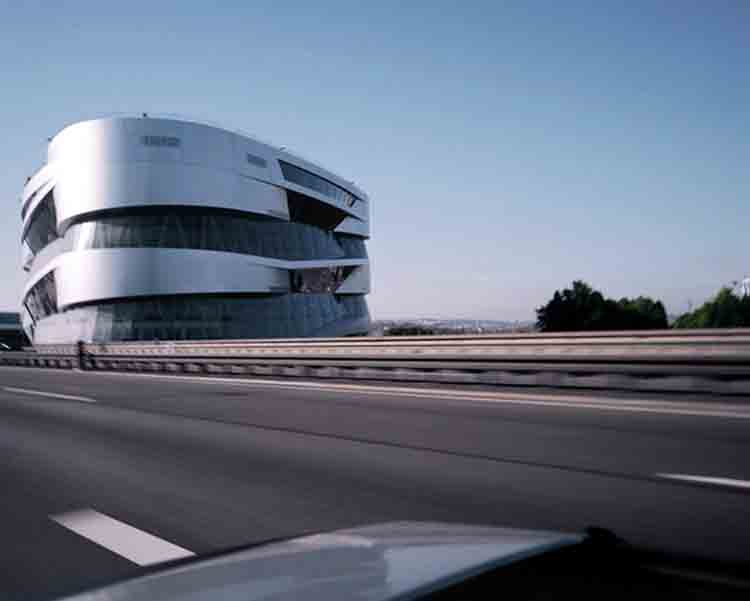 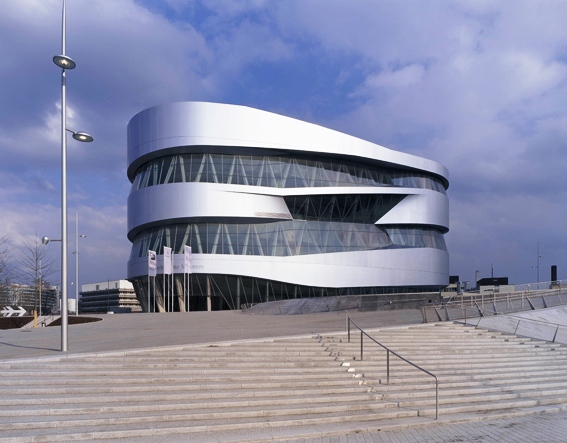 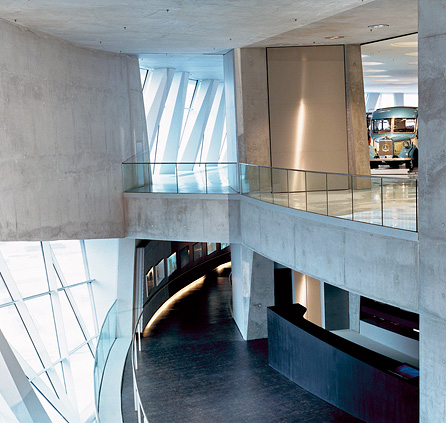 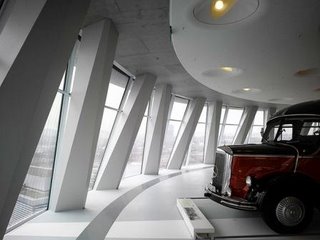 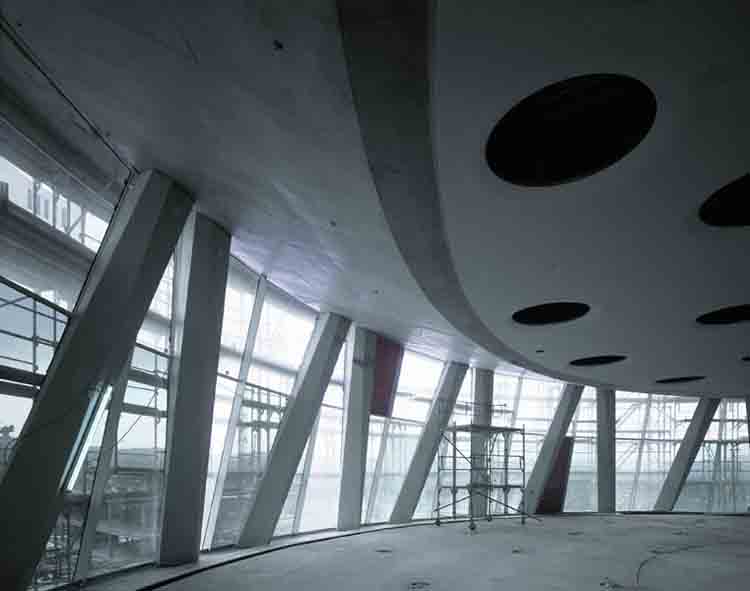 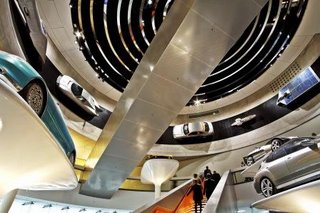 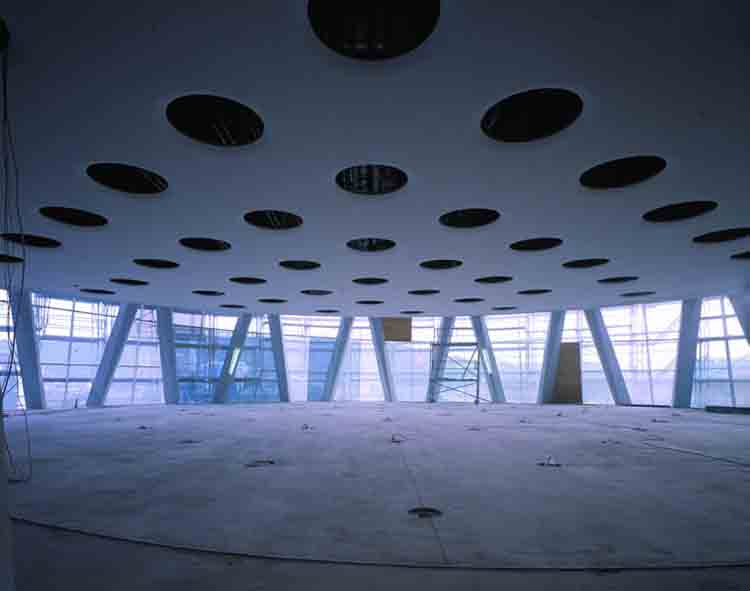 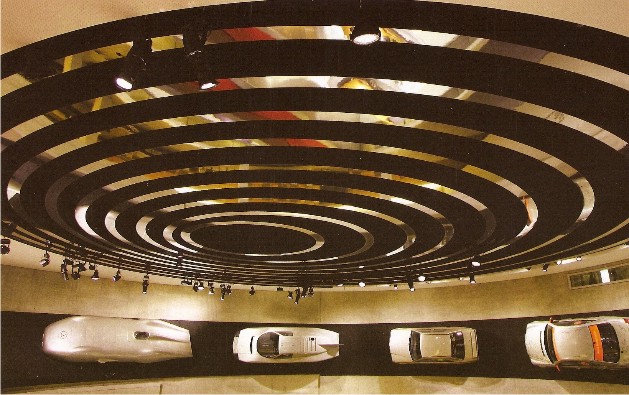 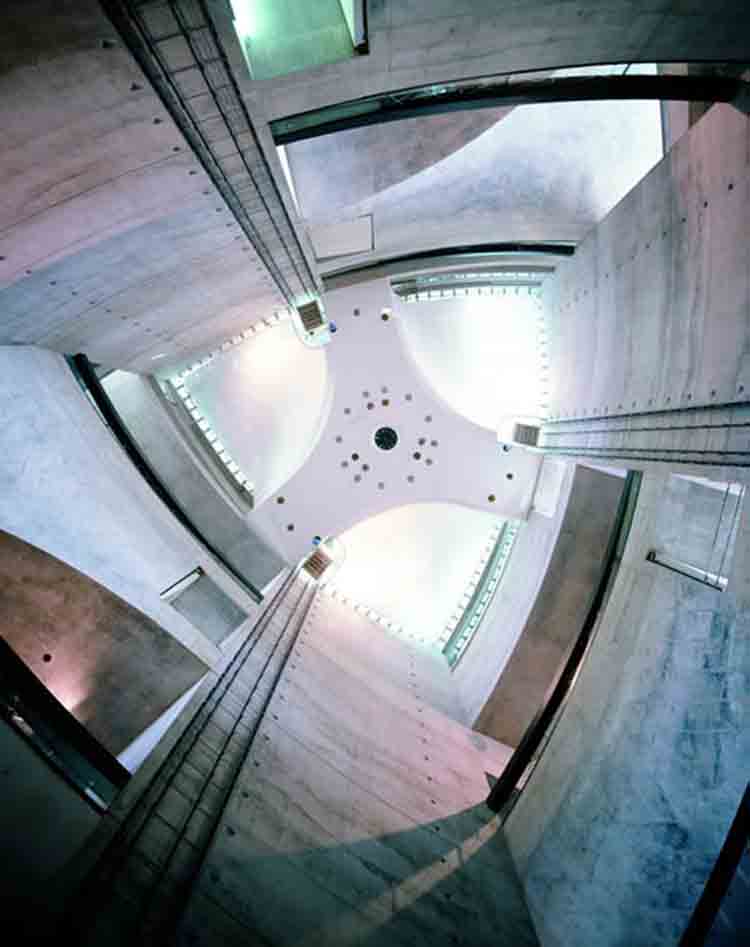 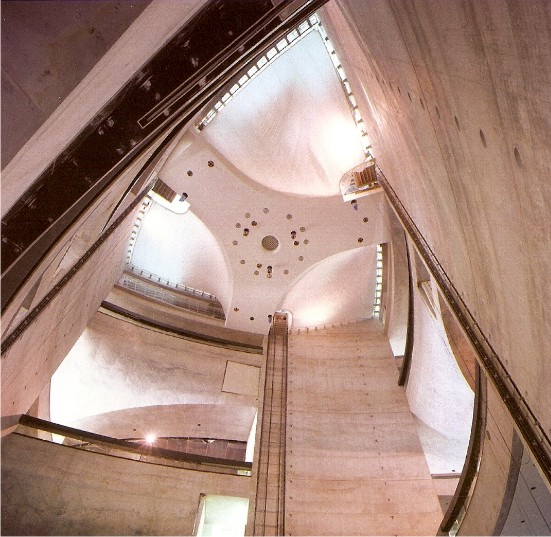 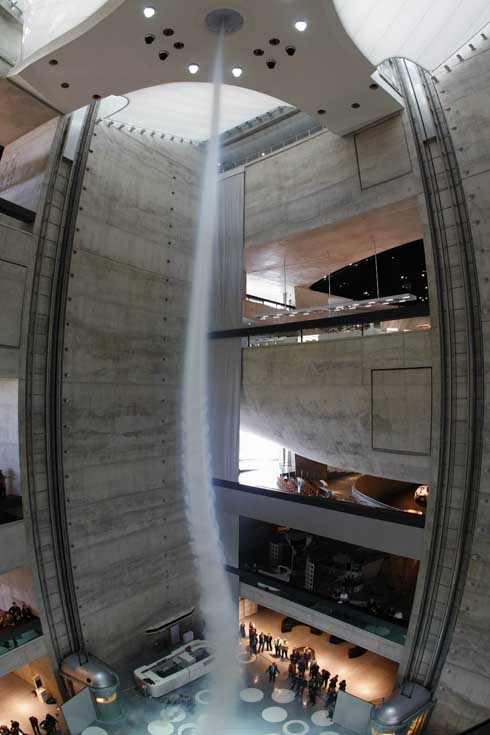 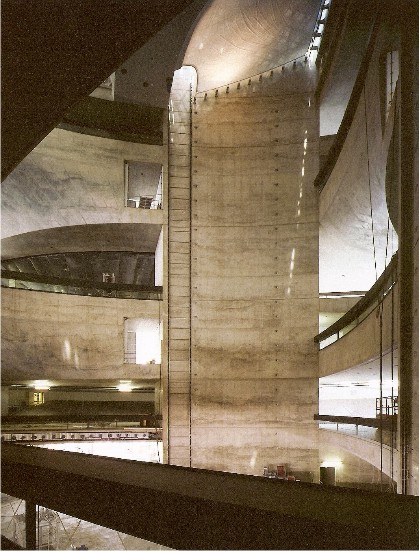 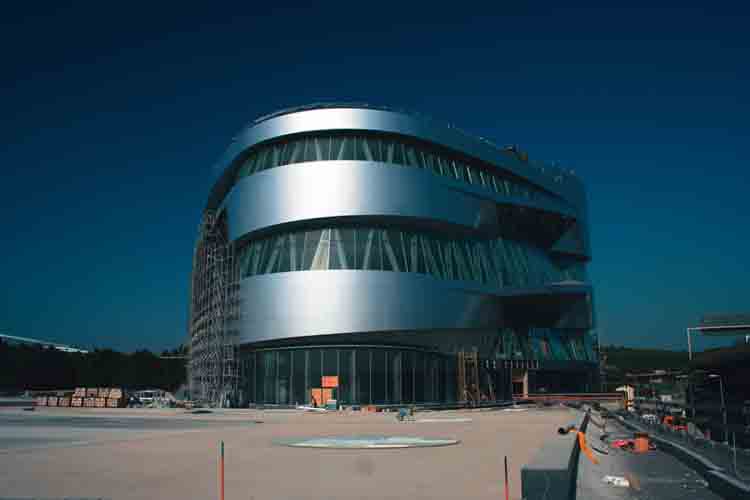 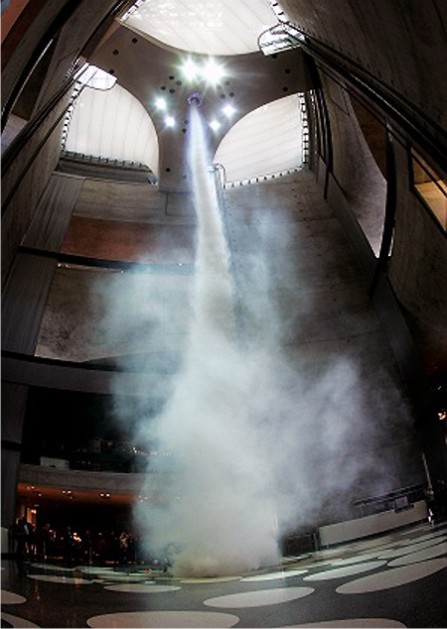 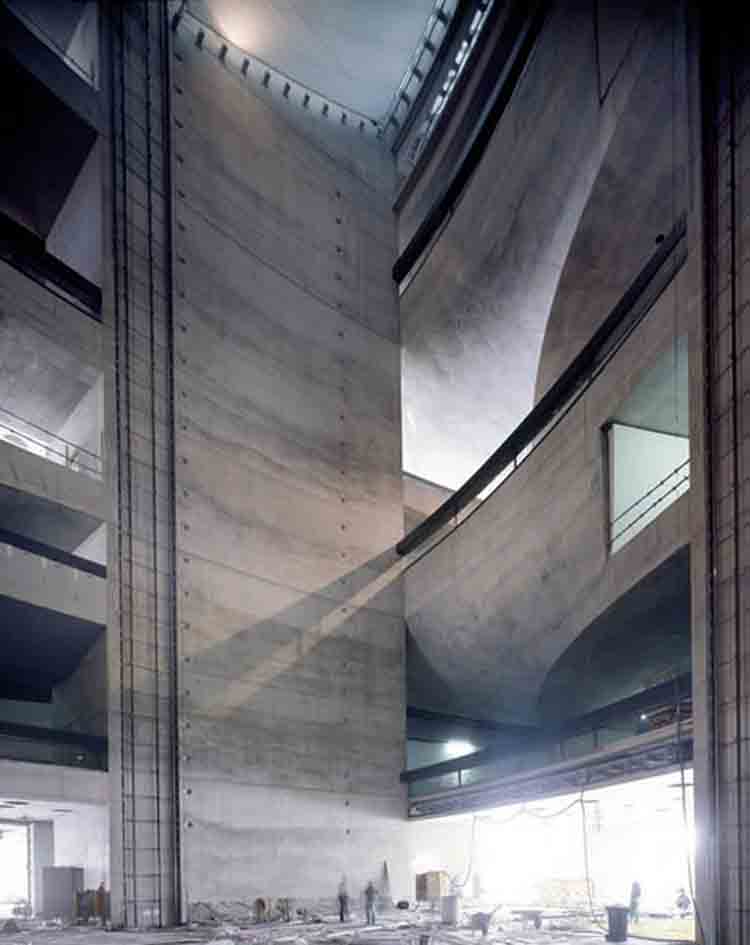