The architect and urban planner Balkrishna V. Doshi Indian is one of the most recognized and influential people of his country, but beyond that, their cultural theories and philosophical teachings have placed in a prominent position in the international scene.

Educated outside the India, his constant concern was to find an architecture that would meet the urgent needs of his country, in harmony with their social and economic conditions, an architecture that transcends beyond the duration of his life and the current system of values, expressed in the words of architect “humility and anonymity”. Apparently, a major advance in the implementation of this self-goal was achieved with the construction of its own architectural office “Sangath” designed in 1978 and completed in 1980, becoming one of the outstanding achievements of international contemporary architecture.

The Sangath complex was built on the periphery of Ahmedabad, Drive-in Road, also known as Karnavati or Amdavad, the largest city and capital of the state of Gujarat, India.

“Sangath”, the name given to the complex, means “move together through participation” and its purpose goes beyond designing homes or offices. It covers a wide range of activities including research by the Vastu-Shilpa Foundation, funded by the company Doshi, experimentation in arts and crafts and studying various technologies of construction or as the architect likes to define… “exploration artistic, social and humanistic dimensions of technology “…
“Sangath” is a powerful architectural manifestation of an independent and original, creative Indian architecture in its rediscovery of traditional and local in harmony with the place, with people and with their past elements.

The dominant architectural forms in the complex are the vaulted, which are obtained from a combination of local traditions and materials with historical examples culturally prefigured such as temples or traditional headgear Hindus. These determinants joined resulting in a complex new design to which must be added the unevenness in the main study, below ground level and the dynamic interconnection of closed spaces both inside and out, giving the vaults a dominant presence.

It is significant that vaulted forms are used in contemporary architecture in both high-tech buildings, such as the Kimbell Museum in Fort Worth Louis I. Kahn or library Isozaki in Kitakyushu, and buildings with low technological level, as works of Hassan Fathy, Rames Wissa Wassef in Egypt or Workshops in Chical, Niger. Obviously, these architectural elements are also able to serve contemporary needs in various applications.

Sangath buildings complex, a set of domes and flat roofs at different heights at different angles juxtaposed occupy an area of ​​473m2 within 2.425m2 fully walled rectangular field. The building complex is built around a large courtyard terrace which is the main entrance. Some of the buildings have sunk below ground level to certain ceilings domes rise only to eye level.

In the entrance courtyard fountain surrounded by dividing pools are located at ground level and landscaped terraces. Some of the outer surfaces of the yard including arched ceilings are coated with irregular pieces of white tiles.

In order to develop multiple objectives, the complex includes a set of open and closed spaces that allow a variety of uses and have in common what Doshi described as the essence of life in Indian villages, “sharing, because we must learn to respect the priorities of the other person are as important as their own. ”

The juxtaposition of closed and open spaces is one of the links that make Sangath a traditional building, which receives its power and beauty of local materials, the local workforce skilled and unskilled and local values ​​of architecture.

Passing through the main entrance, the visitor down some stairs into a room covered by a dome and the option to climb a flight of stairs to a height of three levels or go through a small hallway to the office of Doshi is presented and main drafting room. In this part of the building the ceiling plane rises creating enclaves of multiple heights, complementing and releasing between them.

The bottom of the vault in the hall of writing is topped with concrete natural light scattering in space. At the end thereof an opening which can be appreciated from the entry site visitor makes sense to recover its location along the main axis.

The design studios are in a double height volume topped by two domes. Including a space with flat roof allows natural light until the end of the vaulted areas.

Perpendicular to this wing a block of four units is added, also vaulted. The two units are facing the entrance courtyard feature a triple height and house on the ground floor architectural design office, a conference room, lounge and a service area. In the first and second floor spaces of Vastu- Shilpa Foundation and the guest area are located.

One result of the reintroduction of traditional values ​​is the outdoor amphitheater used for conferences and other meetings.

With the help of a mobile formwork vaults “Sangath” were constructed with hollow clay tiles embedded in the walls. The outer skin is covered with tiles fragmented pieces of waste material from a manufacturer. This procedure has a precedent on the banks of Parque Güell of Barcelona, the Catalan architect Antoni Gaudí. Doshi used this traditional technique not only to reduce the heat inside the building but also as an important element of the methodology in the use of waste material.

Air cooling is not achieved by mechanical technology, which in turn is expensive, but by strengthening traditional cooling devices, improved screens cold water through which air is sucked and returned to the interior spaces.

Sangath also hopes Balkrishna Doshi create a connection between nature and the individual. The general form exaggerate the details of nature with its rolling hills, spaces such as caves, terraced land and water channels with reflective surfaces, which recall the Salk Institute of Louis Khan. Rainwater is channeled through the vaults smooth, round and deposited in the troughs.

The hollow interior spaces are isolated by clay within the structure. The sun’s heat is reduced grassy mounds and reflective white mosaics that cover each vault. Natural light filters into the interior spaces during the day, while the moon is reflected in ponds and around the porcelain tile overnight.

As architectural and research center “Sangath” transcends models based solutions projects Le Corbusier and Louis Khan in the India.

As for the type of building, “Sangath” can be compared with architectural achievements of Frank Lloyd Wright which, not coincidentally, created his own studio in Oak Park, with a domed shape. Other similarities are cooling devices Wright in his workshop and research center in Taliesin West, which in its architectural approach, adapted to the region, also has similarities with the study and research center Doshi on Ahmedabad. So different in cultural and geographical conditions, the works of each of the two architects are based on a careful study of local conditions and values.

The structural system is based on poles and combined beams with reinforced concrete slabs. In the recesses of the vaults of the upper floors, iron and concrete have been used with high insulation materials such as filling with brickwork. The facades are covered with tiles or cement and plaster.

The interiors are characterized by their different shapes and light into different directions. The decor is based on building materials, with the exhibition of prints formwork in concrete ceilings, contrasting with the soft and smooth concrete floor rust colored red. All materials and 60% of the workforce were local. 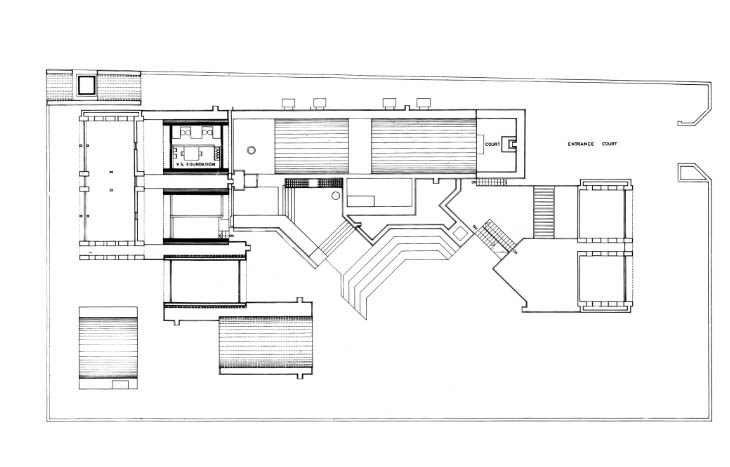 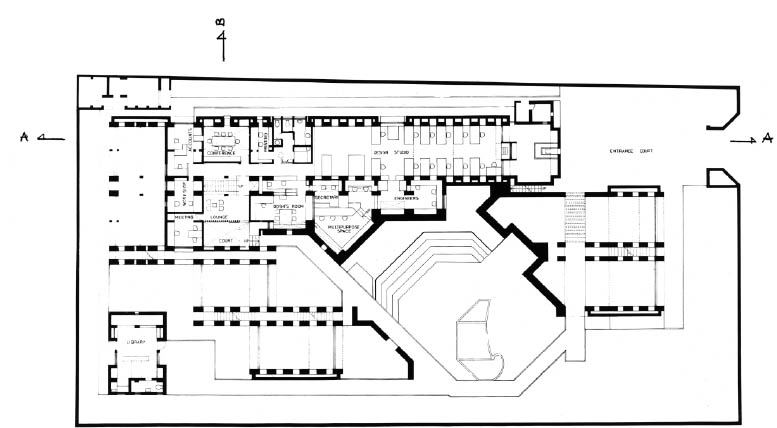 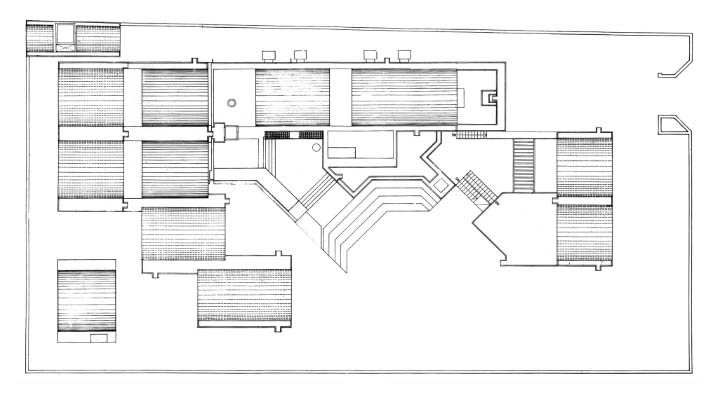 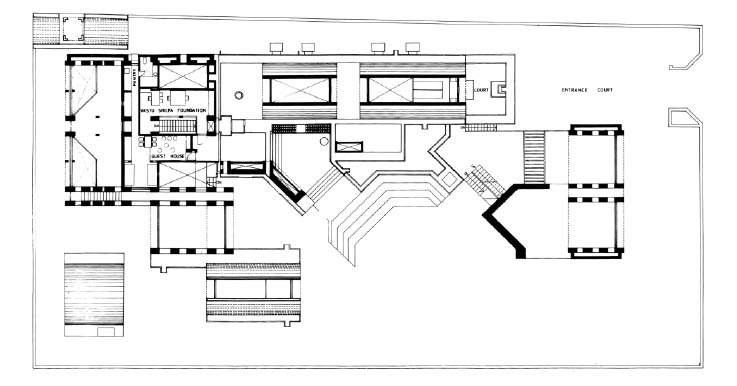 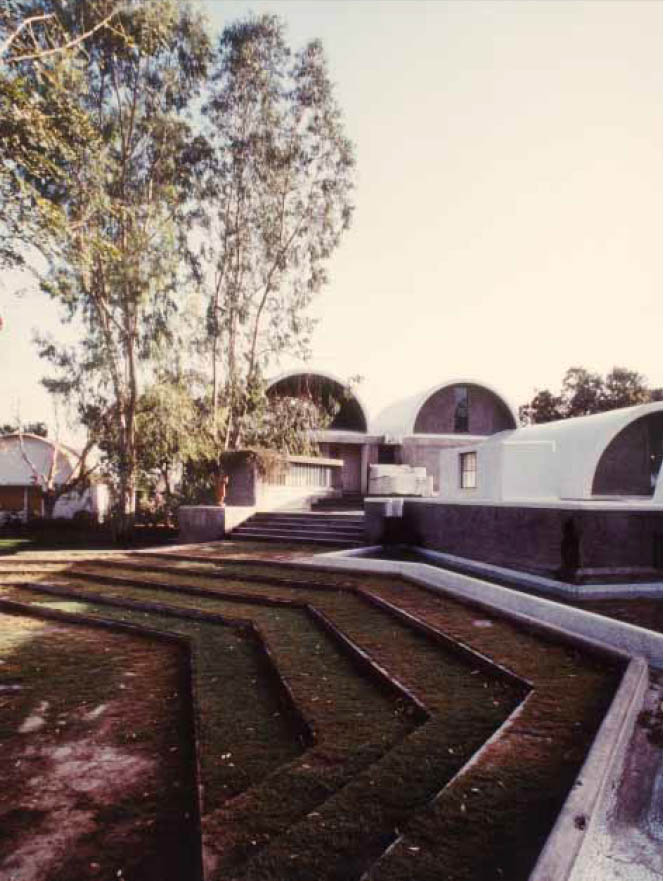 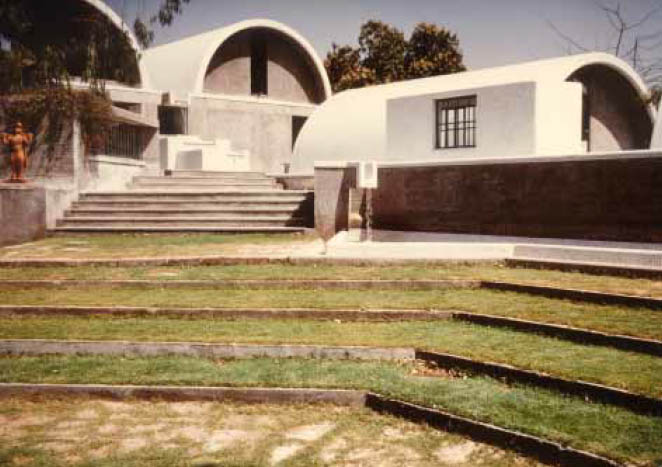 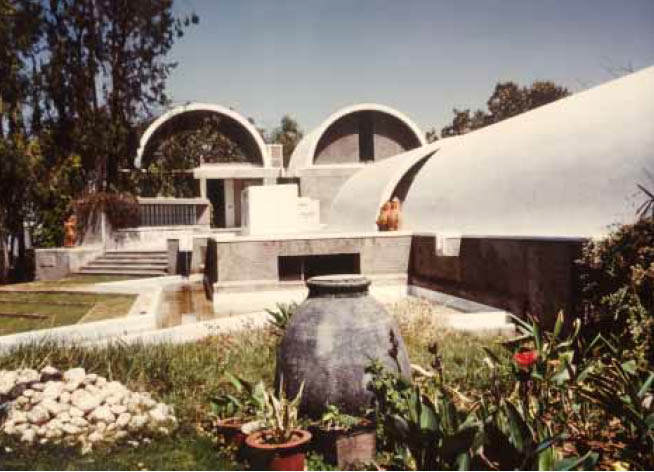 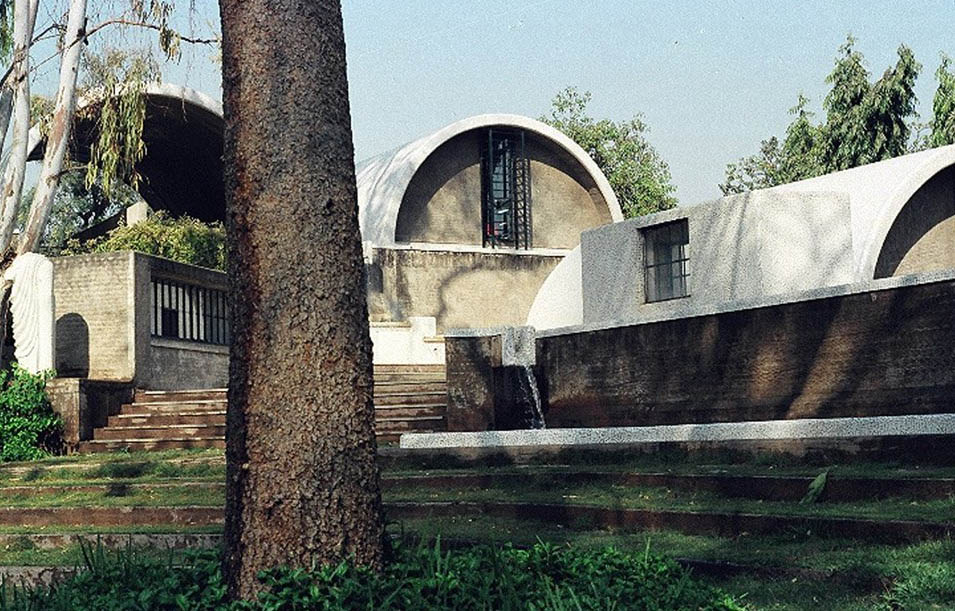 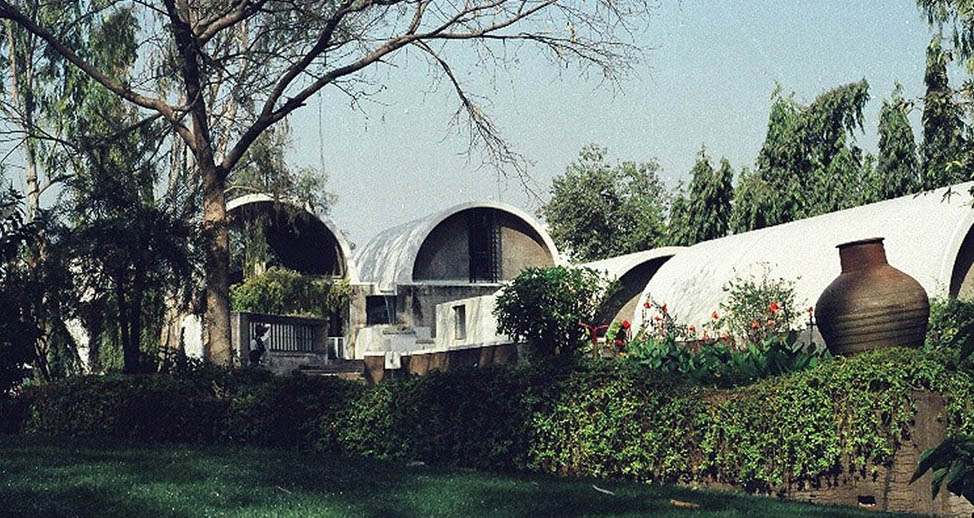 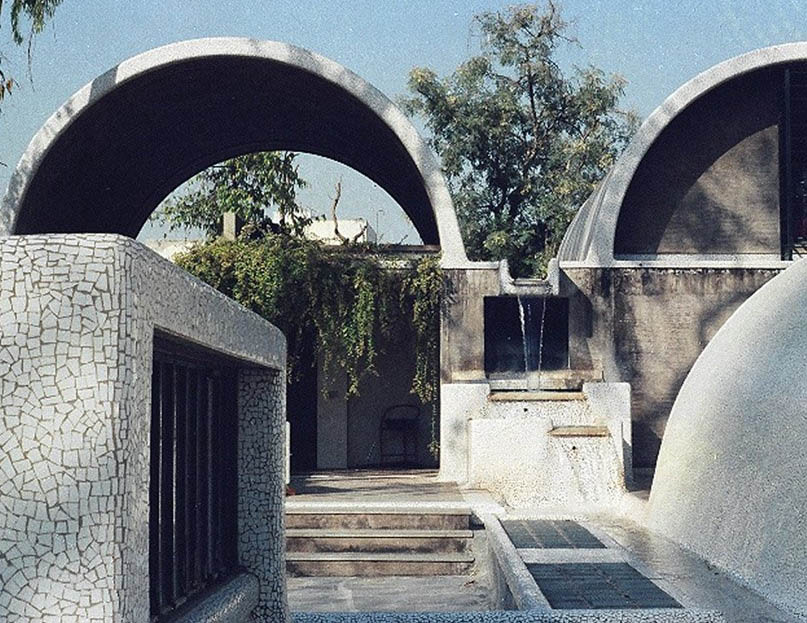 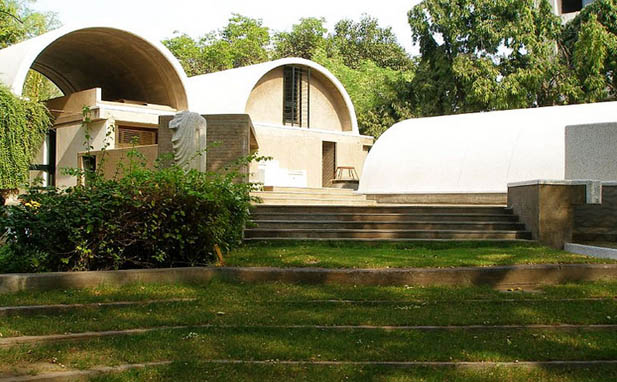 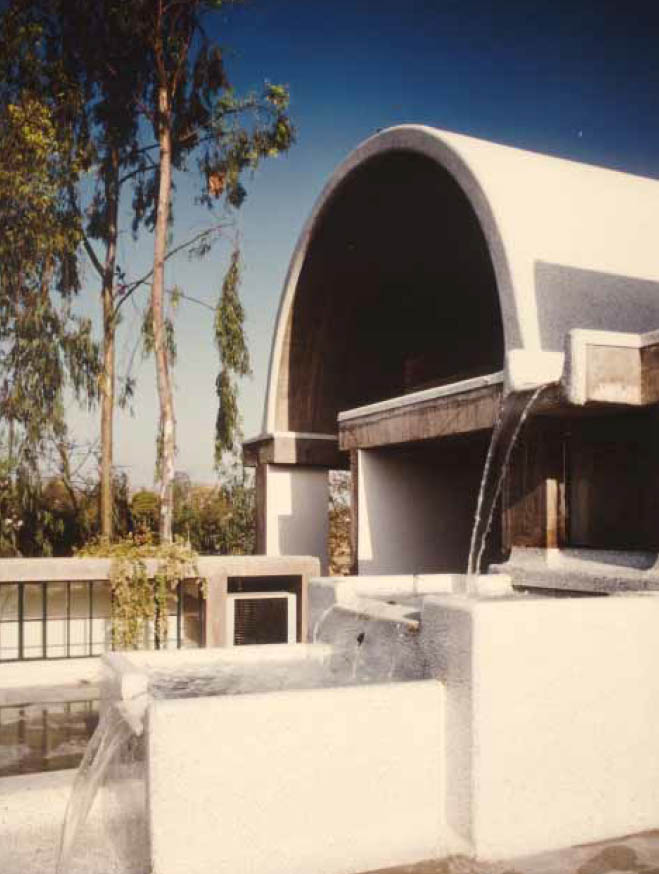 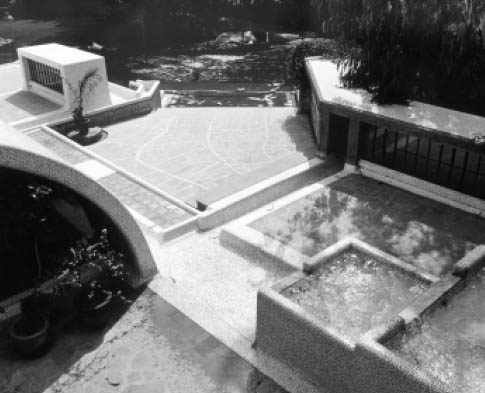 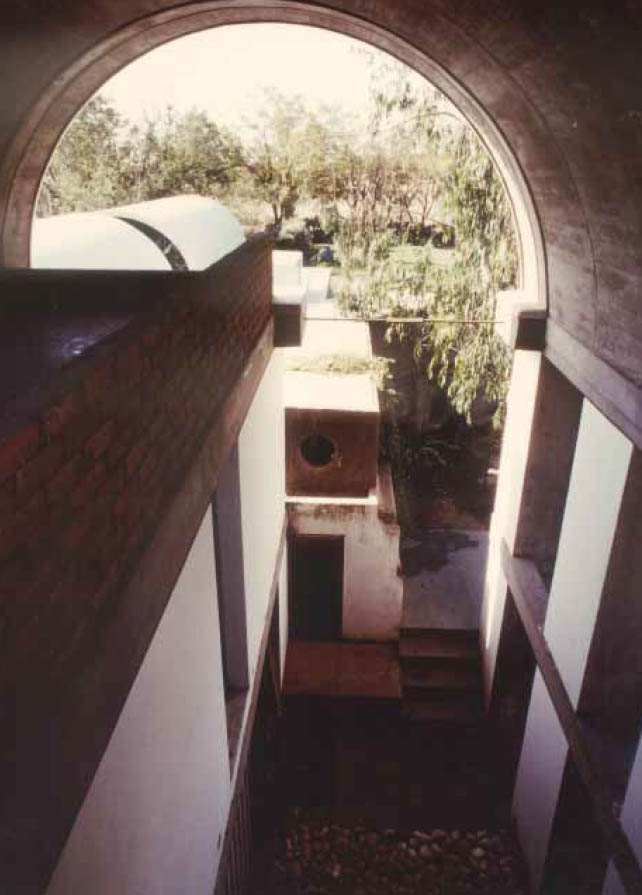 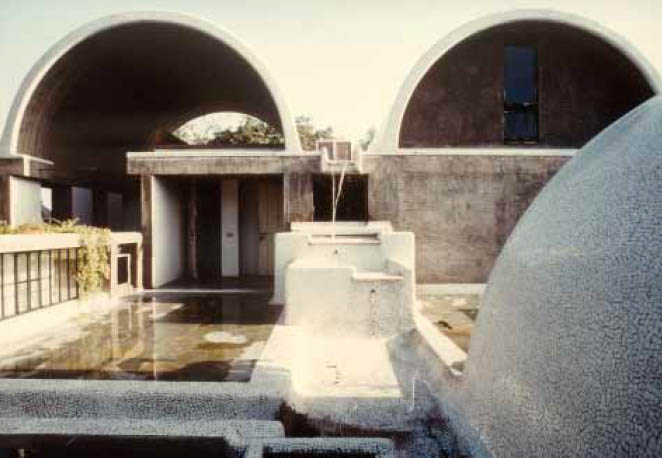 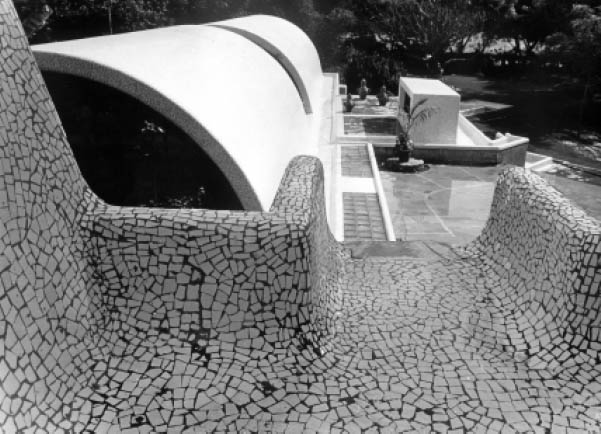 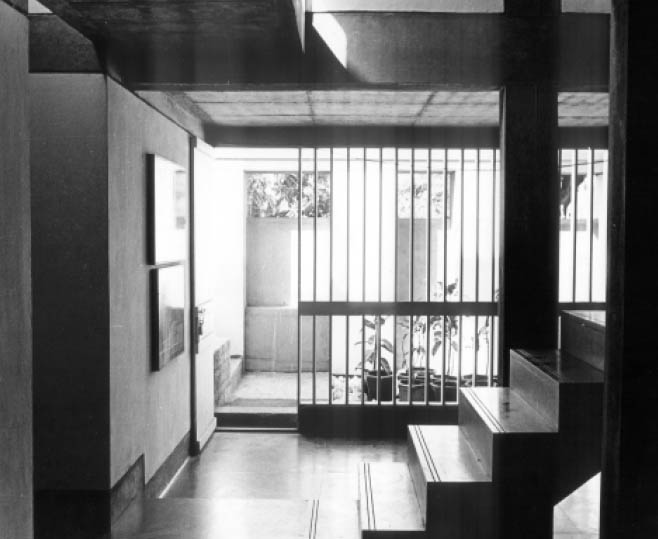 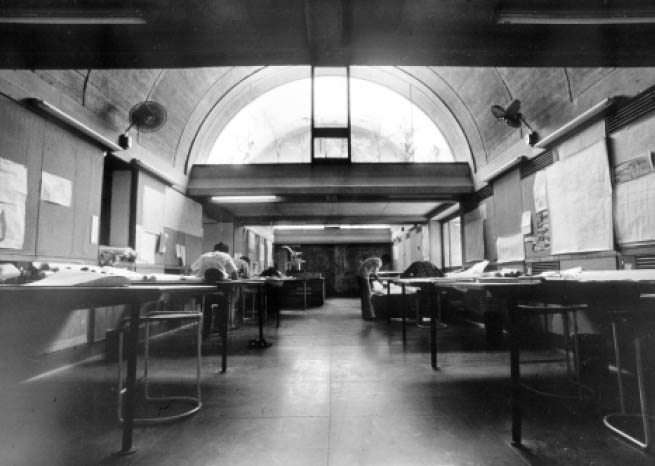 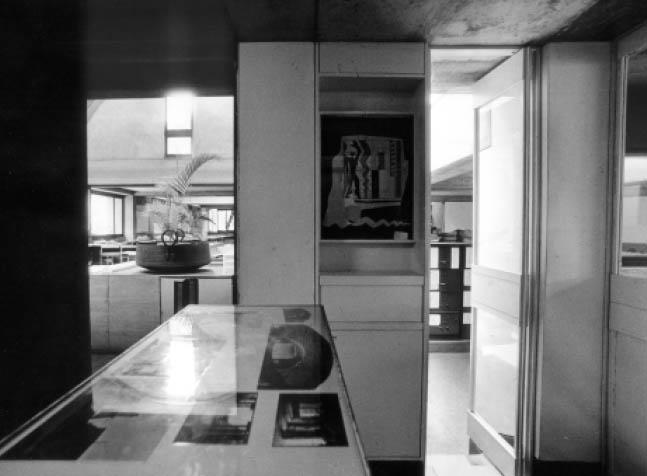 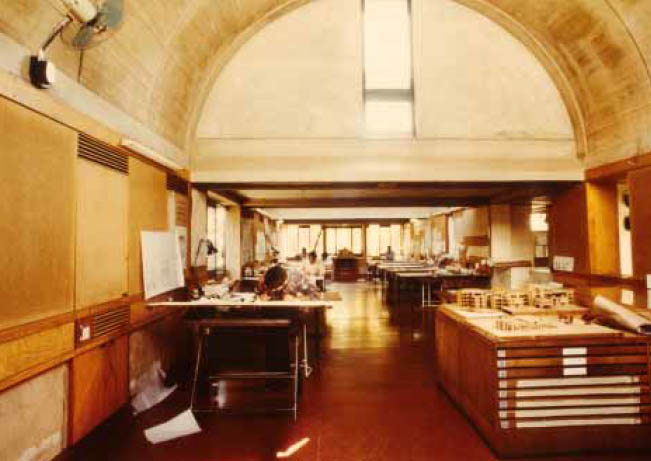