The Salk Institute for Biological Studies is perhaps the most poetic and building largest Kahn in the United States.

In 1959 Jonas Salk, founder of the Salk Institute, looking for a suitable architect to design its new Institute for Biological Studies in San Diego, California. A friend of Salk attended a conference and Kahn suggested that Salk would like your ideas on architecture. When Salk and Kahn met, they realized they had intellectual interests parc Kahn and was hired. Salk did not provide any formal agenda, but he emerged from his conversation with the architect, in which he described as the center conceived.

Kahn made numerous proposals for its master plan before deciding on the version developed. However, in 1965, construction costs had exceeded 14 million dollars, the master plan had not been completed and missing to build houses for staff and other auxiliary structures.

Kahn and the commitment we made at the beginning of the Salk project provides a concise template from which the master plan can be concluded as the institute grows in scale and grandeur.

Located in La Jolla, California, USA, on a cliff overlooking the Pacific Ocean.

The city of San Diego provided the ground for the Institute. A Salk offered various locations from which to choose and Kahn took with him to help him choose. The site chosen is a great spot located on a cliff on the coast in the area of La Jolla.

The project did not have a formal program starting to work on, but emerged from discussions between client and architect. This understanding between the two sides has undoubtedly been one of the key factors that have allowed this work to be considered the most important architect and that she had almost total freedom to express their ideas.

Kahn managed to persuade the customer that it was necessary to create two separate environments, one for the conceptual realm of the intellect and the other for the kingdom trial of empirical research: the first consists of cells of well-furnished patio in front of a home and community a second gallery space with good services.

The Salk Institute project went through three phases in which the architect designs sought to achieve the best possible way devised by him and Jonas Salk at the outset.

In the first phase of the project, Kahn designed a tower that would be in the labs. They also placed a building known as the Meeting House, a place to organize meetings, which had a cafeteria and other services. There would be a recreation room in which workers would relax, placed in the top of the cliffs, like the earlier buildings, and finally a housing placed in the bottom of the cliff. These four buildings are separated from each other, communicating via external deambulatorios.

In the second phase of the project, Kahn reduced the height of the laboratories gave more area and divided into three pavilions.

The Meeting House, recreation rooms and housing were also placed in the same places that the first phase.

The laboratories, the Meeting House and the rooms are served by leisure deambulatorios field. Kahn said that scientists need places to rest and relax from work talking about other issues. It is for these reasons that designed the Meeting House, recreation rooms and a small number of studies next to the laboratories. These spaces have a different dimension to the formal work space, the studies had carpeting and wood, while the laboratories had glass and metal. These rooms are present in all phases of the project.

The third phase of the project was the final. In it, the laboratories are divided into two blocks separated by a plaza. At this stage there are three floors for laboratories and three mezzanines situated in the middle of the previous hosting facilities. These floors are higher than those designed in the second phase, so that they can walk upright, although its use is the same.

The structure has a courtyard that evokes the grandeur of a cathedral and has simple elements, such as a narrow channel of water running through its central square and cascade down to a lower number of ponds. The proportions of the courtyard outside, its width in contrast to the vertical height of the tower adjacent studies, create a beautiful scale timeless character.
The yard is perhaps the main project, in terms of aesthetics, material, composition, relationship with the environment and technology.
At the center of the square and through it, Kahn designed a canalillo water and leading to the sea, culminating in a large terrace located at the south side and two or three meters lower than the square. The route of water helps to break the hardness of the square to mark the time that an axis of symmetry of the project. This tour begins in a travertine marble, and cross the square by a small channel to settle in a pool at a level slightly lower. This pool rebalsa marble to a gargoyle, and falls into a drainage 4 cubes marble.

In this courtyard there are stairs coming down from the square and a few banks with a travertine curious design. From this terrace you can see some splendid views of the Pacific Ocean.

The towers of study arranged symmetrically, that rise on each side of the courtyard walls have angled 45 degrees to allow a spectacular view.

These vertical four-story pavilion-like buildings connected with the larger of the laboratories, which demarcate the boundaries of this large complex.

The property consists of two blocks separated by a plaza with greenery.

It consists of laboratories, studios, libraries and offices of the posts. The separation of facilities regarding the laboratory rooms is a feature of Kahn’s architecture in this building.

The studies are arranged in the front of each block of laboratories looking to square up to the challenge of the two mezzanines higher peak and the shape of a window in each of them facing the sea. As the three floors of the laboratory at different levels of the two studies, between the two sides are occupied by separate stairs and elevators.

In the spaces created by the laboratories, the studies are small courtyards and stairs where there is enough shade, and all are reported. The two-story in which the studies are separated from each other by land and two outdoor terraces that communicate with the access stairs and elevators, also outside.

These private study for scientists, are made of wood, concrete volume in the dentate.

The first floor of the first laboratory and mezzanine facilities are underground, which have windows and exterior doors in a succession of British courts, with a containment wall, located in the two opposite walls to the central square. These courtyards are formed with a small perimeter towers that house facilities and stairways, which are in some ways from those of waste Laboratories Richards.

The beams of the floors of underground labs are huge, each have a structure that leaves large holes are atirantadas and supported on two carriers can lead to “bounce” to be flexible and thus more resilient earthquakes, because California is in an area of high seismic activity.

These beams correspond to the mezzanine facilities were planned and designed by Kahn Komendant.

The highly controlled shuttering of concrete on site creates a sleek surface modulation that sometimes overlap with teak wood panels, giving scale to the courtyard and a monumental sense of grandeur to the entire complex.

The facades are made of concrete poured, and it is more flexible and more resistant to earthquakes. It also pozzolana and lavender is a color, a hue that rosea at dusk and dawn. To prevent cracks that could form in the concrete during curing because of the dry climate of California, Kahn designed some special formwork to mitigate this problem. In the texture of the concrete is well appreciated that marks the forms are almost intact, which gives an idea of the quality of the material.

At first, Kahn designed the central plaza with trees and vegetation, but chose to entrust the design of the garden to the prestigious Mexican architect Luis Barragan. He, seeing concrete facades did not hesitate to put a plaza across the travertine floor of the same color as the building, saying it would be “fifth facade on the ground.” There are some rows of trees in the main entrance of the laboratories, across the square but there is no vegetation.

The sources are of marble, like all water pipes in the square.

The wood is teak study, rather sensitive to environmental extremes.

The laboratories have some glass windows and an exterior corridor that passes between them and the inner courtyards formed by the studies. The structure of the stairs and elevators are made of concrete and, being outside, access to the laboratories is made by a bridge that connects the corridor leading to the entrance. 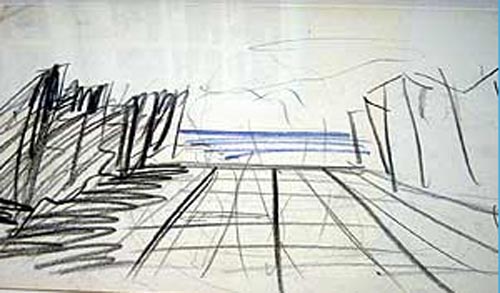 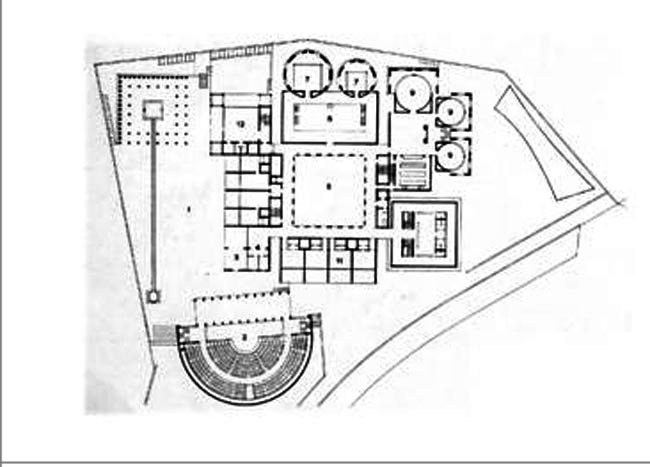 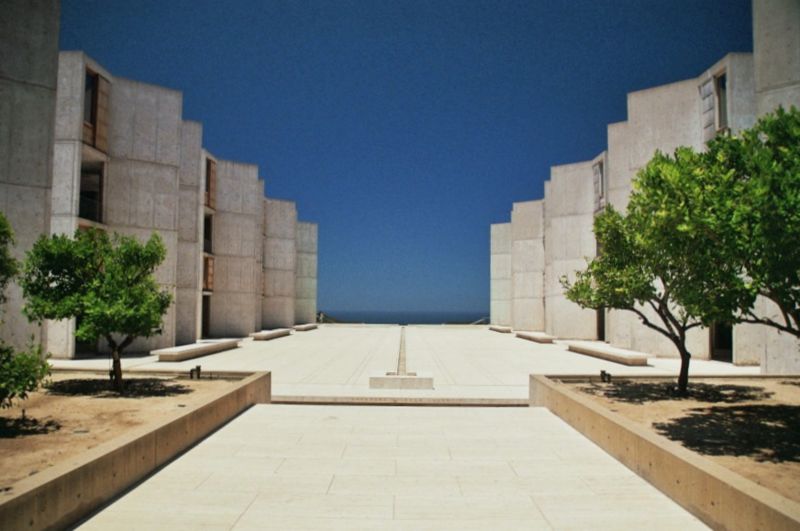 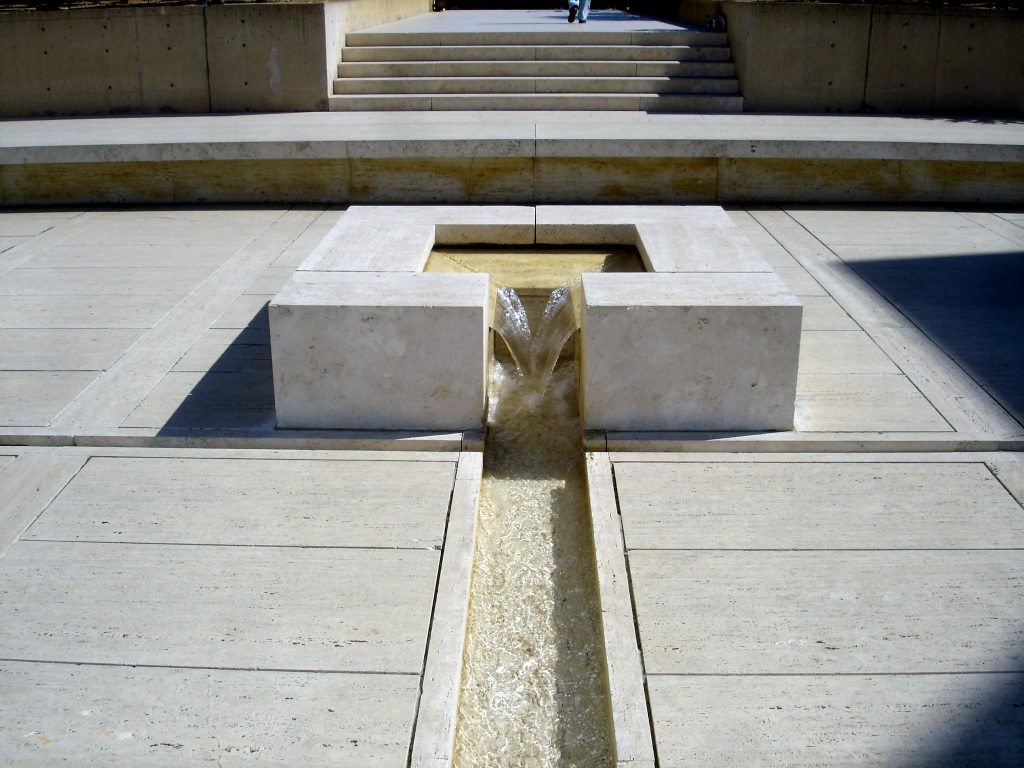 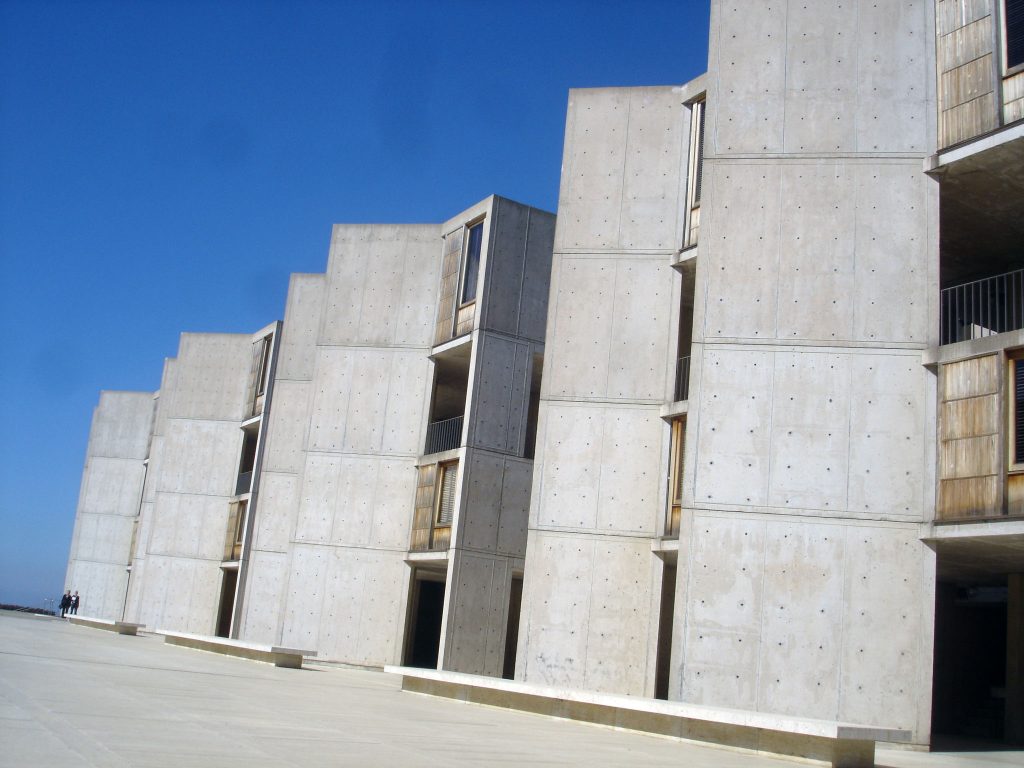