At the time, Picasso Tower, with 45 floors and 157 meters above ground, was the tallest building in Madrid and Spain. It was designed by American architect Minoru Yamasaki Japanese origin, who also designed the World Trade Center disappeared in New York, with its towers bears some similarities.

Designed in 1974, construction did not begin until late 1982, and was inaugurated in December 1988. Since then, this has been the tallest building in Madrid, beating the Tower of London. Madrid lost its hegemony with the construction of four CTBA towers: Torre Caja de Madrid, Sacyr Vallehermoso Tower, Crystal Tower and Torre Espacio. It was also the tallest building in Spain until it surpassed the Gran Hotel Bali in Benidorm, Alicante. The telecommunications tower Torrespaña Madrid also outperforms Piccaso tower, but is not considered building but merely standing structure, like the CN Tower in Toronto.

Picasso Tower is a skyscraper located in Madrid, Spain, in the Plaza de Pablo Ruiz Picasso, within the business and commercial complex AZCA, located along the Paseo de la Castellana in the financial heart of the Spanish capital.

AZCA area configured in the 80s, and an opportunity to respond to the demand of the Spanish capital raising, in the northern part of the Paseo de la Castellana, an area that brings together a residential, commercial and other third building for use

In this scenario Minoru Yamasaki leaves an example of different culture and training, the architecture of the Torre Picasso is influenced by oriental art and simple but sculptural forms that distinguish the architect in his works.

Meeting the demands of the program in terms of form and function, Yamasaki displayed on the facade of the elements that would make his work, not only the highest of modern Madrid, but a beautiful and elegant building, icon of the Spanish capital for nearly two decades. This draws on history, clean façade sight, is crowned with a cornice like a Doric column and reminds Adolf Loos with the external design of the Chicago Tribune.

A notable feature of Torre Picasso is its wide entrance arch, which supports the entire facade above it, with an underground steel reinforcement. The space under the arch is covered by a special type of safety glass called STADIP, the same used in Agbar Tower of Barcelona.

The tower was built on a plot of 10,000 square meters, with 45 floors above ground rectangular, 38×50 feet, 5 basements and a total height of 157 meters from the street level or 171 if measured from the last basement.

The tower has an official postal courier, loading and unloading and internal messaging.

From the upper floors, 42 are for offices and the ground floor serves as the main entrance, where 18 elevators are located in three groups of six. All plants loos feature for use by the occupants of said plant.

Plants generally rectangular in shape and with a surface of 1900 m², are completely diaphanous, having occupied the central part of the block of 18 lifts, 4 ladders, technical rooms, bathrooms and a space of 120m ² destined for a fireplace rise to emissions from the ventilation network of underground roads AZCA, financial complex that owns the tower.

On deck, the 44th floor, are the cooling towers and distribution of hydraulic system of air conditioning. In the plant 45 is the machinery of one of the blocks has elevators whose upper forged using heliport.

La Torre Picasso has 5 basements under street level. In the basement 1 has provided an extensive shopping area and parking, they complete the large capacity of the building for this function as basements 2, 3 and 4 are devoted mostly to parking to thereby to provide parking space to more than 5000 people who daily work in the tower, along with the many visitors. In these basements also distributed machinery technical rooms in the Tower.

The basement is for 5th service galleries. Outside the tower and on the ground floor, north and west, are a series of shops with direct access from the street.

The building combines mixed structure of reinforced concrete at its base with pillars and metal beams to his coronation. The slabs are formed with sheet metal and lightweight concrete. The whole structure is protected by fireproof mortar fire. This structure allows the creation of large open spaces to make better use of its distribution.

Basically, the structure is very simple, the loads are distributed must support the building, including seismic and wind, between the hollow hub forming the four sides of the facade built with continuous steel columns and a central core constituted by abutments also steel structures interacting internal and external vertical through horizontal beams in plants. This structure should withstand even the impact of a plane and a conventional fire for a couple of hours.

The foundation was executed based on 120 piles with metal jacket diameter of 1.80 m and a length of 16 m. The building structure consists of a central core of a perimeter of the floor and act as diaphragm, both pillars braced.

The core is a metal structure with 38 pillars, double height. The perimeter is formed by hand from the basement to the second floor based on a concrete wall and from the 2nd floor to the coronation, with 56 double-height columns. The floors are freestanding metal and concrete with Expanded clay lightweight aggregate, which gives a density of 1800 kg / m 3 concrete.

The facade of the building offers a high coefficient of thermal and acoustic insulation due to the combination of an aluminum frame and a vertically disposed thermal glazing and leaving small windows between the pillars of the facade.

The gardens surrounding the building have different roads and access to the tower covered with granite slabs.

The finishes of the common areas are made of marble lobbies and elevators, fireproof walls finished in texturglass, metal ceilings and carpet antistatic and fireproof. 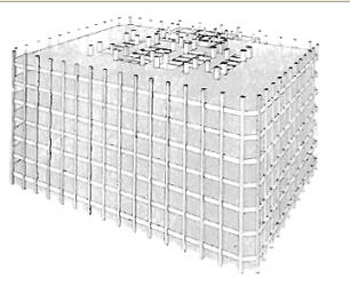 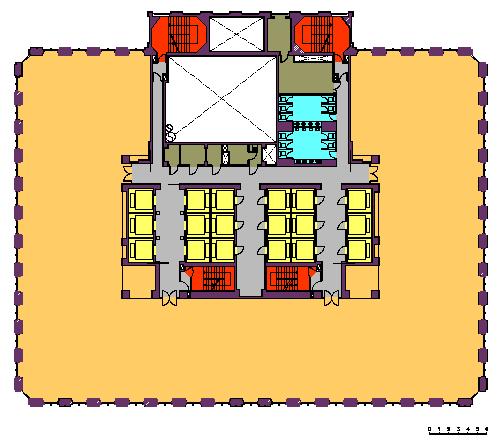 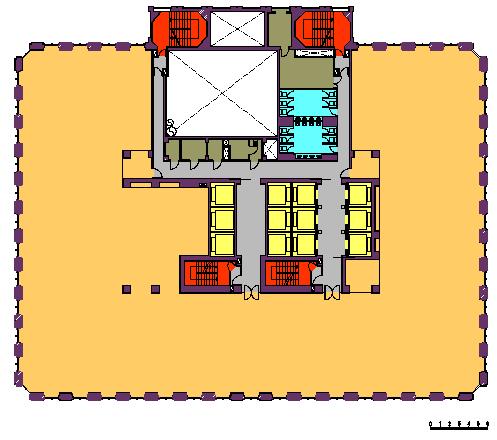 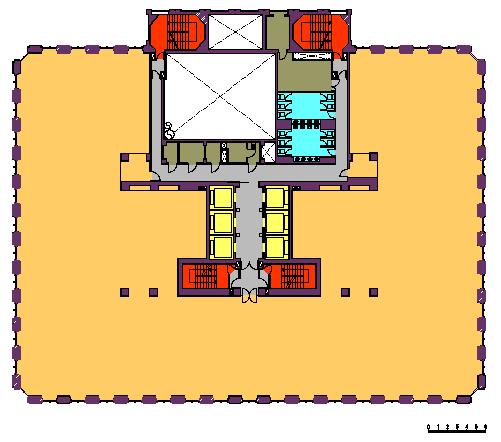 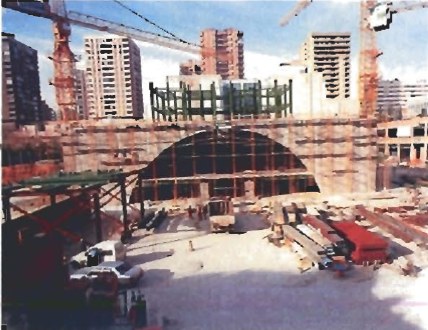 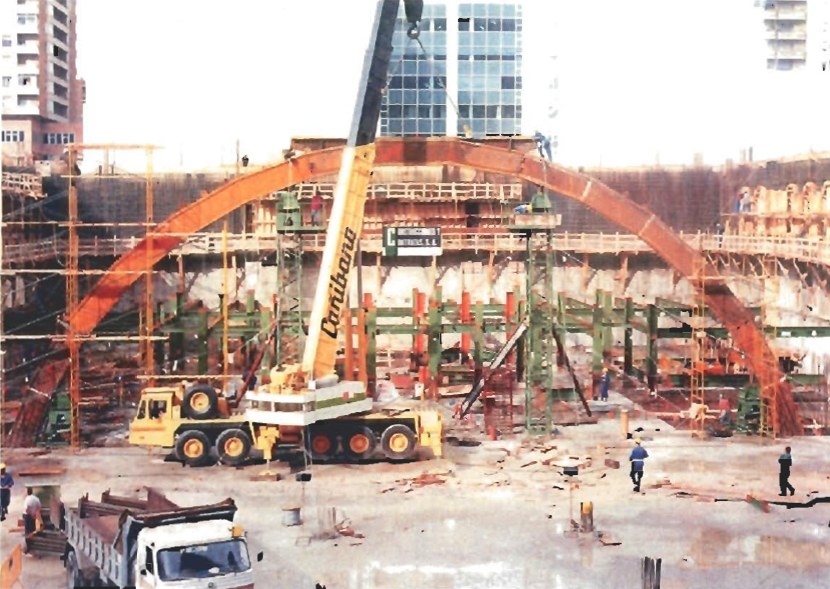 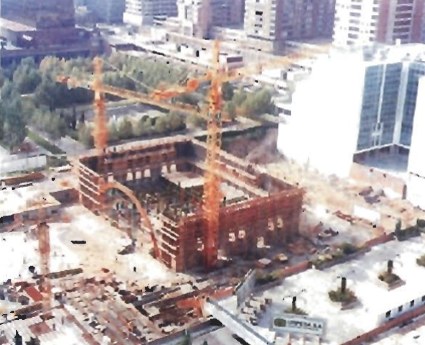 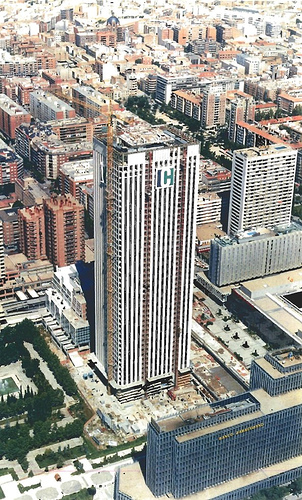 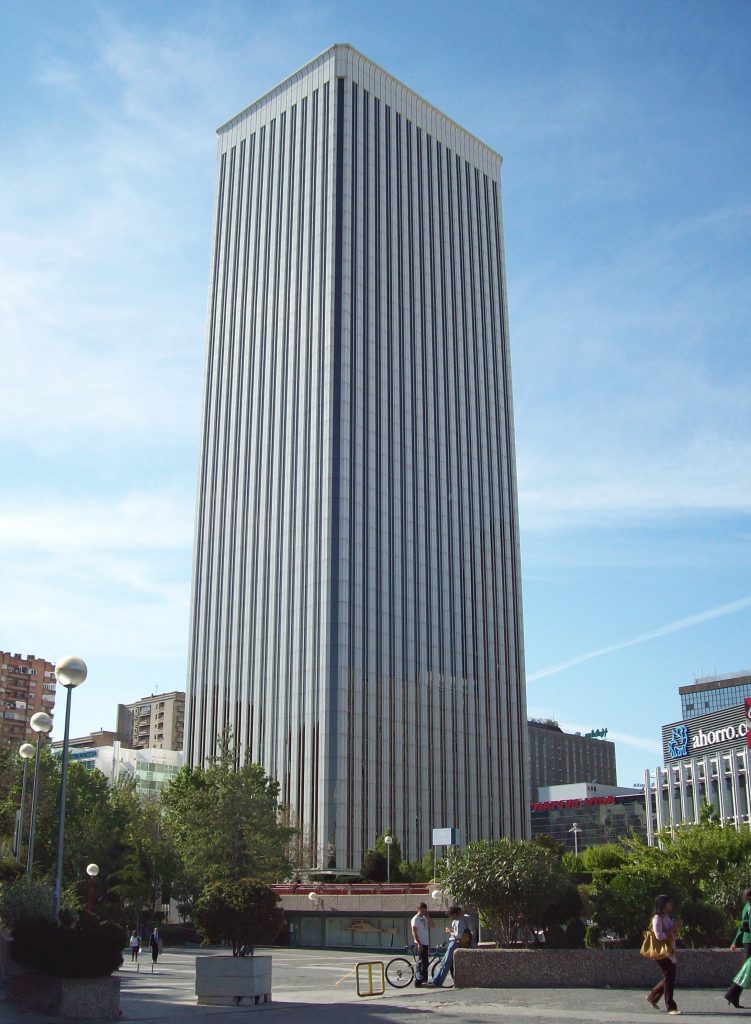 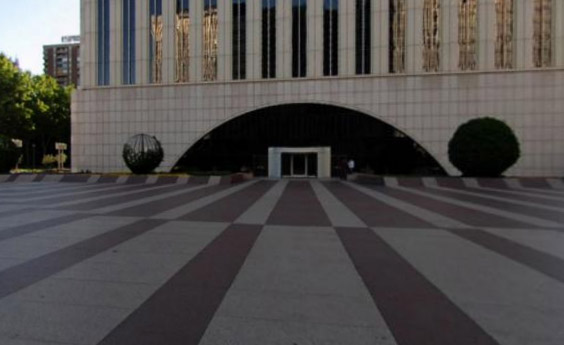 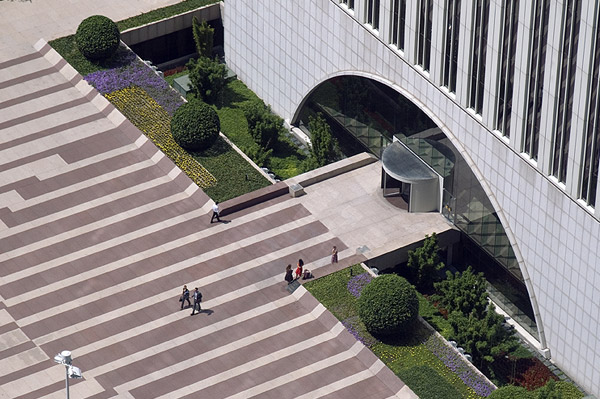 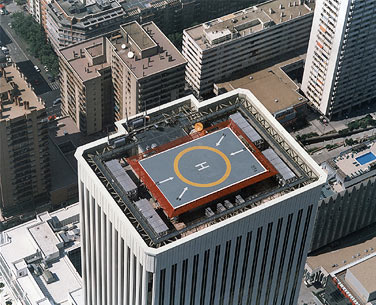 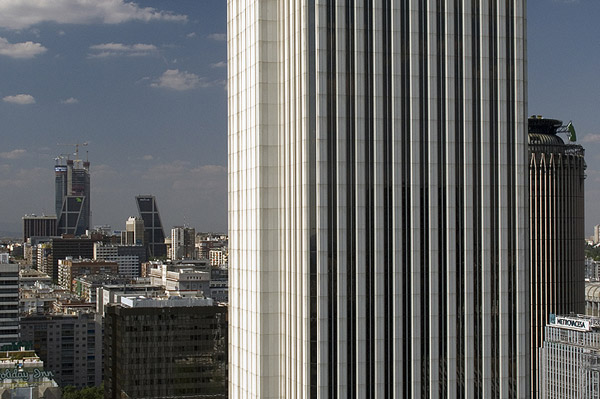 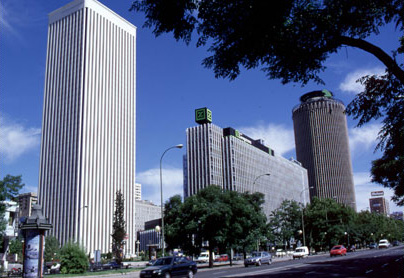 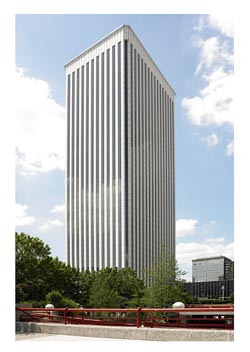 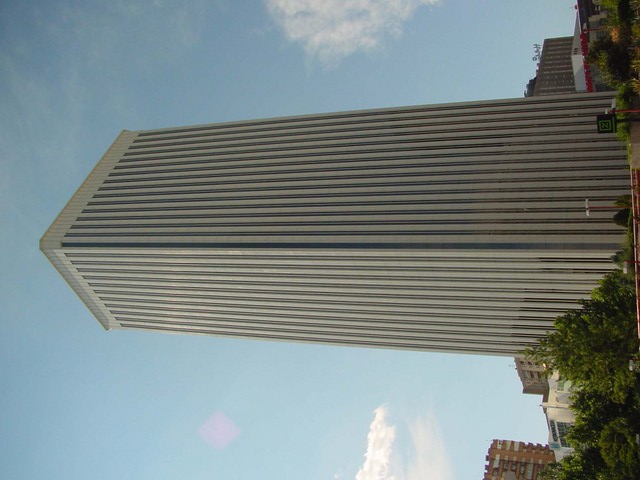 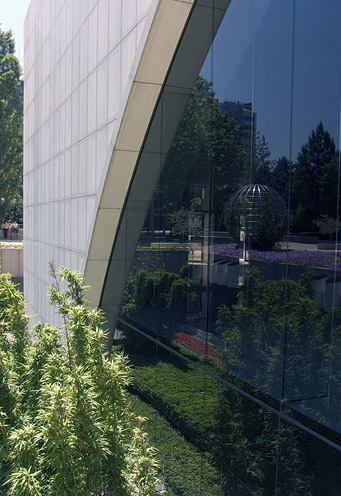 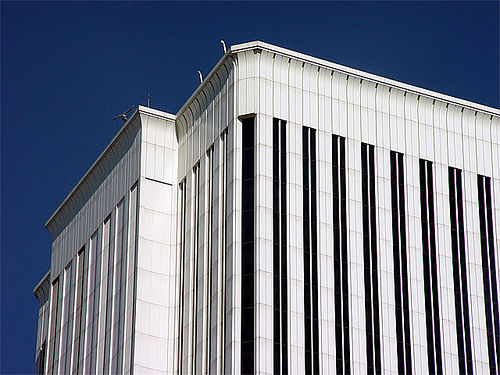 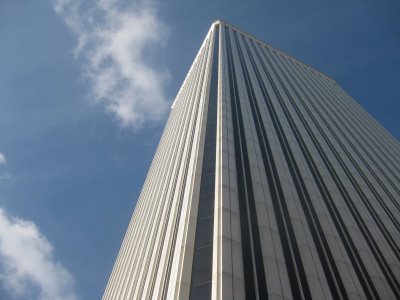 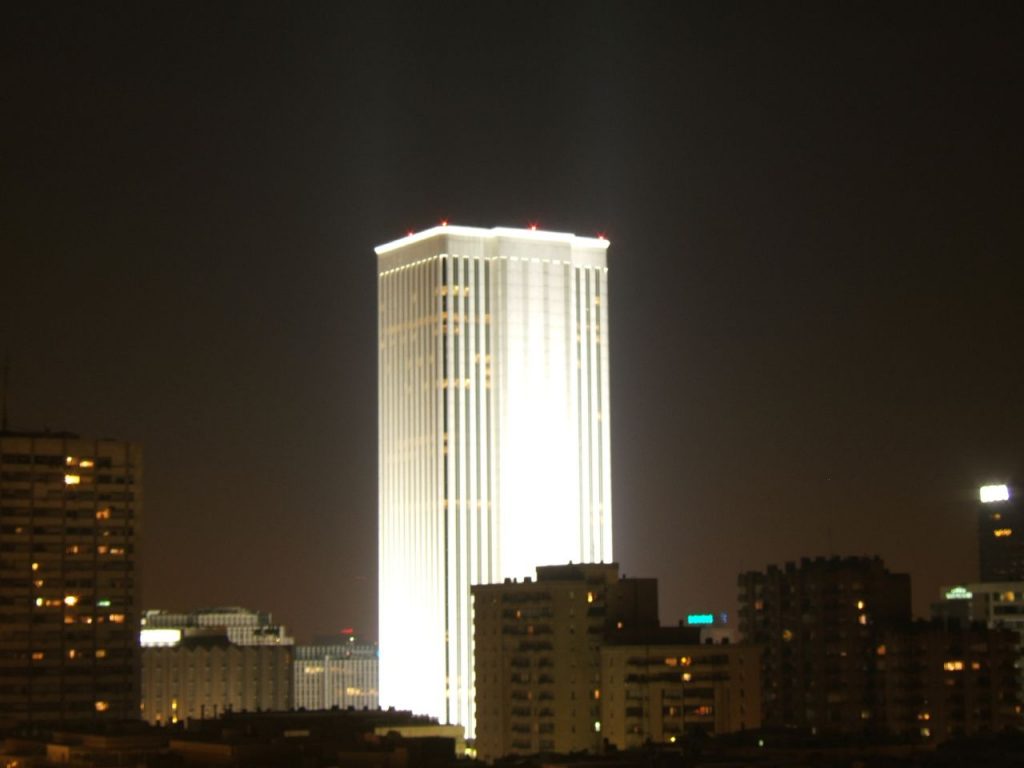 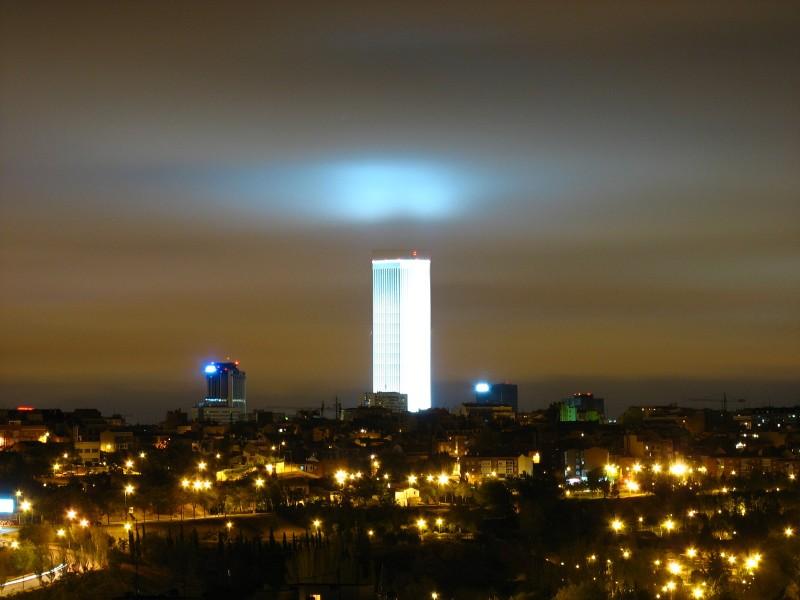 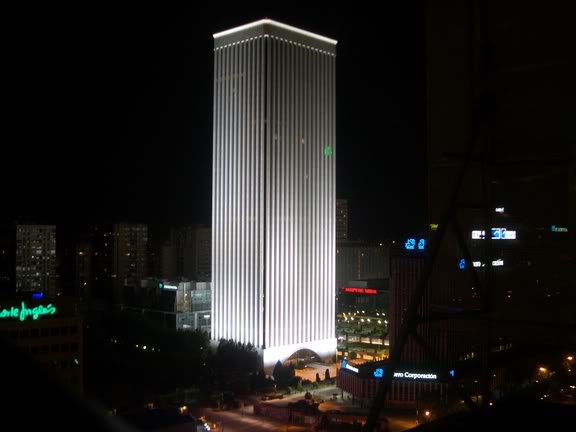