In 1922, the Chicago Tribune newspaper called for a new North American headquarters in the metropolis. The construction of the new claims were not exactly modest. Under the terms of the call should be one of the most beautiful buildings in the world and, obviously, had to be a skyscraper.

The competition were 260 architects from 32 countries. Surprisingly European architects took part. Indeed, in Europe, where in many cases the urban structures of medieval prevented the construction of skyscrapers, after World War I was awakened by the desire skyscrapers. Many representatives of the new construction at the U.S. saw an opportunity to tap into the construction of a skyscraper the formal language of European modernity. Finnish Eliel Saarinen, the Society of Architects Walter Gropius and Adolf Meyes, Adolf Loos, Bruno and Max Taut and finally Hugo Häring were some of the most famous architects who designed a project for the headquarters of the newspaper. However, while the contributions of European architects do modern era, is discussed in many publications and other architects to serve as proposals for its work, the Americans decided on a project quite conservative.

Raymond Hood and John Mead Howells a skyscraper built in 1925 as ornamentation reminiscent of Gothic tracery launched towards the heights seemed an insult to the evolution of European architecture. However, the second prize designed to draft SAARINEN meant the recognition of a representative of the European architecture.

But do not forget the words of Loos andalusia know Verdict of the jury: “The great Greek-style column, Doric, will be built. If not in Chicago, in any other city. If not for the Chicago Tribune, to any other entity. If not by me, by any other architect. ”

The building should be the headquarters of the Chicago Tribune, the streets between North Michigan Avenue, Austin Avenue and St. Clair Street in Chicago, USA.

As enunciated in Loos life “architecture can only be grave or memorial.” For any other project was only one solution to a specific need, but in the monuments and tombs was where you could see the real architecture.

The building planned for the Chicago Tribune is a true example of the wording of Loos who brought him to the point in drawing this project.

The fact was that architecture could be grave or memorial, however difficult that may be an architect to accept that his work does not contain any substance in the architectural discourse. Loos wanted to rig the impossible and break a building project with its own statement addressing the proposed functional as well as architecture in the state was more pure.

If architecture can only be my grave monument or building will be both, Adolf Loos had to think when faced with the blank paper. The tower of the Chicago Tribune is exceptionally simple forms and placing a huge Doric column (monument) on a large base shaped parallelepiped rectum (tomb).

The vision of the sketches is enough to ratify these observations. It is projected that Loos wanted a building that once seen, even for a few moments, could not be erased from the memory of the spectator. A building to convey feeling, that feeling that there is something wrong, something that is dead, but on which we get up and we raised to the sky. The sentiment also be looking at ways that we are all familiar and yet feel a escalofrió to realize that we do not identify as a result.

The project is a timeless and the Loos said: “The great Greek-style column, Doric, will be built. If not in Chicago, in any other city. If not for the Chicago Tribune, to any other entity. If not by me, by any other architect. ”

For this project because it no less that the only possibility of providing a functional building with some architectural discourse.

In the interior of this unexpectedly large column (remember that the columns are usually solid elements, bearing) the activities necessary for publishing a newspaper with a reputation.

At the base of the building, at the bottom, in the representation of the tomb happen access and public activities such as conferences, meetings, etc..
At the center of the plant is a form of elevators and lobby distribution that will be repeated for all plants, forming a vertical axis of communications from which emerge radially enclosures that will shape the individual office spaces, all with windows abroad.
It is not too large a plant as it is looking outside the slenderness of a noble as the Greek column, a monument.

Loos almost certainly thought of a radial structure to design this building. Its circular articulated by a repetitive accesses do think it is.
This is a very valid for this type of building height that was later used in buildings like the Twin Towers disappeared.

The core of the boxes containing the elevators and halls distribution plants generated a massive tower and that is important throughout the vertical axis of the building while providing an excellent support an escape route safe from the possibility of fire or other situations requiring the evacuation of the building.

The second important element is the facade, although this is “strips” that run up and down the facade and generate the second point of support for generating the beams racial forged (again, as in the twin towers).

The first was to not divert attention from the forms. The polished granite when it fits in perfectly to create the facade forms a perfect geometry. When all of the same color avoided creating rhythms or patterns that could alter the physical forms.

Assuming that the first principle is impossible to fulfill because the lining of the building is always going to generate some kind of feeling in the spectator Loos chose the color to black as the coating and not another. Black is the sum of all colors, black imposes respect shows elegance, black is the color of mourning in the Western world, black encourages us to contemplate more and submission to the item noted that no other color. For these reasons Loos chose the black of all colors. 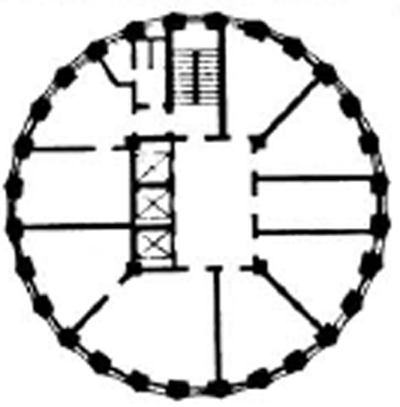 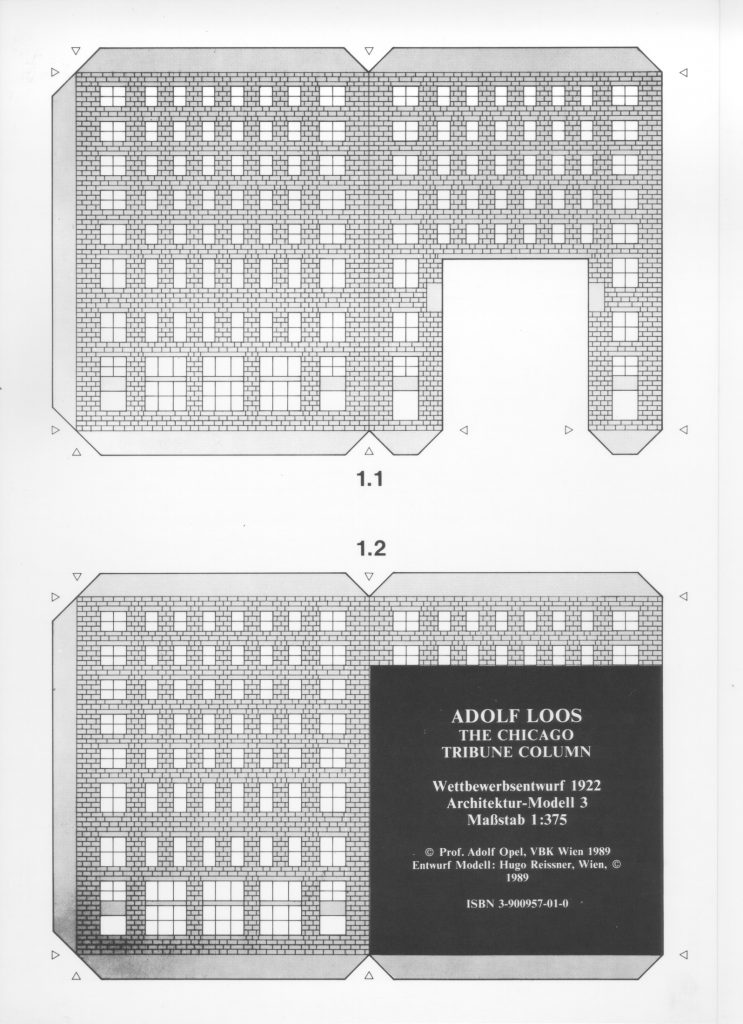 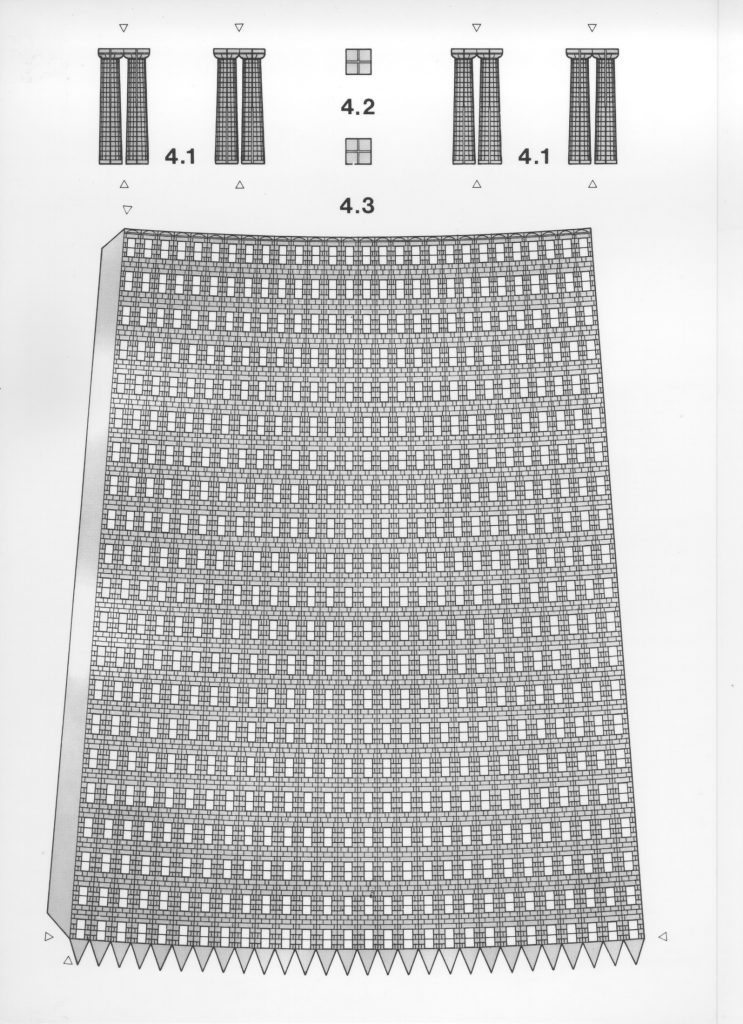 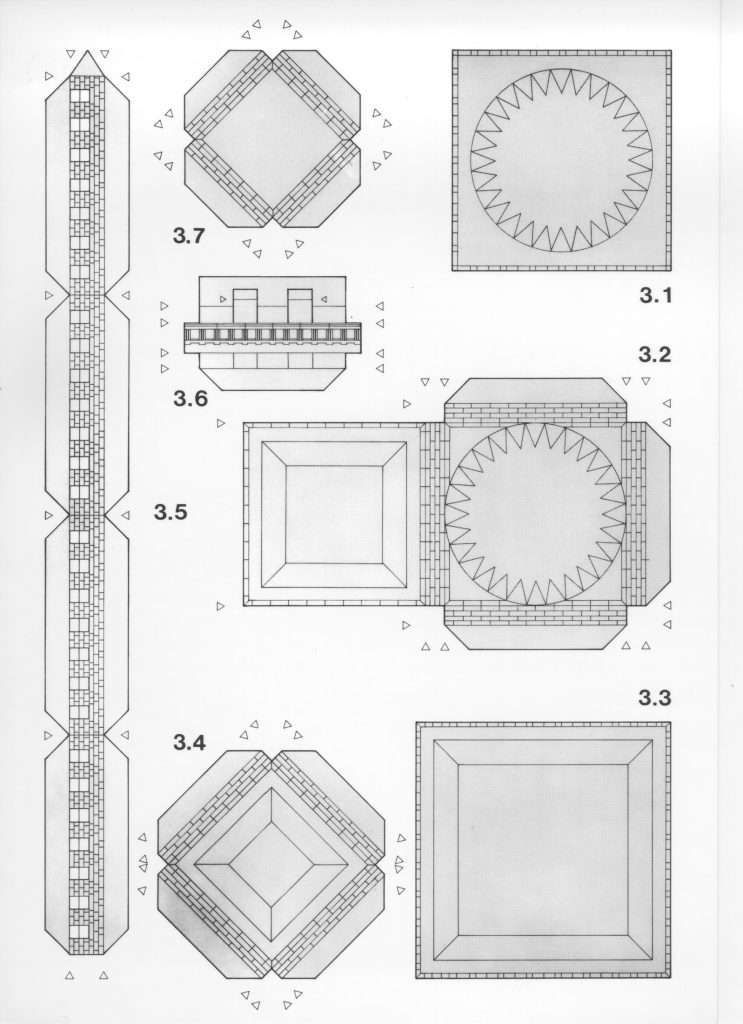 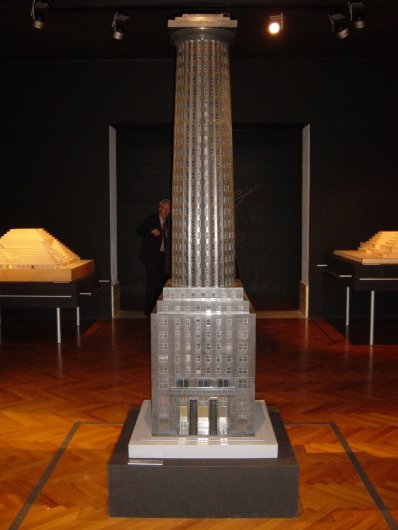