With a height of more than 550 metres, the CN Tower was the tallest free-standing structure in the world until the opening of the Burj Khalifa in 2010 with 828 meters became the man-made structure more largest in history.

Its construction lasted 40 months and at a cost of 300 million Canadian dollars. In 1995 he was ranked as one of the Seven Wonders of the Modern World by the American Society of Civil Engineers. The official opening ceremony took place in October 1976.

Although the tower is a source of pride for Canadians and an undeniable tourist attraction, the origin of its construction is closely linked to practical reasons.

The construction boom that occurred in Toronto in the ’60s not only changed their relatively low buildings skyline dotted with skyscrapers on the other, but also caused serious communication problems. Helped solve problems that the construction of the CN Tower with its microwave receptors at 338 meters and 553.33 meters antennas. People living in the Toronto area now enjoy one of the clearest reception in North America.

The CN Tower is located at 301 Front Street West in the heart of the Entertainment District, on the north shore of Lake Ontario, Toronto, Canada. The Tower is easily accessible from Union Station and the streets and major roads.

In the beginning was planned with the aim of placing an antenna high enough to permit the transmission and reception of signals without any interference, especially due to the tall buildings of Toronto. Before completion, the architects added to it a revolving restaurant and observation deck.

You reach the observation decks, bar and restaurant with fast elevators, which it takes only a minute drive from the base to the Observation Deck Interior.

It opened in 1976 and has the highest metal ladder in the world since 1776 has stairs that climb 147 floors, while a fire escape and is not open to the public. This rises to the observation deck located 342 meters by an elevator.

It has two water tanks of more than 56,000 liters each that recharge automatically.

It is estimated that the CN Tower weighs 134,193 tonnes

It was built by the state railways, the Canadian National Railway, known by the acronym CN, origin of the name of the tower. The CN Tower began construction in February 1973 and was completed in 1976, after 40 months of work.

Once the pit 15 meters deep, 7000 meters cubic poured concrete, 46 tons of rebar and steel wire 36, creating a wall thickness of 6.7 meters for foundation

To build the base of the main pillars used a slipform moved hydraulically. This was already by itself a pretty impressive feat of engineering, consisting of a metal platform that was big on cats, raising approximately 6 meters a day, the same workers advanced meters with concrete underneath.

In August 1974, construction began on the main floor. Using 45 hydraulic jacks subject to cables that hung from a steel crown anchored temporarily to the top of the tower. Twelve giant steel supports and wood were slowly raised into position and then be used to create the media on the basis that support the main level.

\”Olga\” helicopter which helped in the installation of the antenna

Before the antenna could be placed, it was necessary to dismantle and remove the giant crane that served for four years to build the tower. To perform these movements, we used a 10-ton Sikorsky helicopter “Olga”, especially for industrial lifts, moved to Toronto by air.

After some critical time for the helicopter during the dismantling of the crane began to put the different parts of the antenna. Each time one of these parties was high, workers were at the top and helped maneuver the new piece, all in one place de la Torre whose diameter was only 5 feet, with wind gusts and temperatures freezing.

They spent four weeks until the last piece of the antenna was placed and secured by the quantity surveyor Paul Mitchell heights.

On the main level has seven floors, some of which are open to the public.

The building has three main areas for visitors:

The CN Tower is composed of several structures. The main structure is a hexagonal hollow pillar of steel and concrete containing all six elevators, escalators, connections and power distribution. At the top of this tower was placed a metallic antenna signal transmission for radio and television.

The hexagonal shape of the tower can be seen between the two areas for visitors, but off the main platform three support legs give the tower the appearance of a large tripod.

Beneath the public areas are a large ring-shaped white Donet, protected with a durable foam structures containing the radar receivers.

The SkyPod, was built in concrete, poured into a formwork of wood and attached to steel bars supported by the lower deck, and then reinforced with a steel compression band around the outside.

Extensive tests have shown that the tower can withstand hurricane winds, earthquakes, and the effects of snow, ice, and lightning (the tower falling approximately 200 times per year).

The glass floor observation deck are open to 342 meters. The glass floor has an area of 24 square meters and can withstand a pressure of 4,100 kilopascals.

The thermal glass units are 64 mm floor thickness, consisting of a panel of 25-mm laminate, 25 mm camera and again a panel of 13-mm laminated glass.

Six glass elevators up and down from its exterior to 6 meters per second, at 1 meter and a half where there are strong winds.

The transmitting antenna measures 102 meters and consists of 44 pieces of steel with 8 tons the heaviest.

Other materials used in construction: 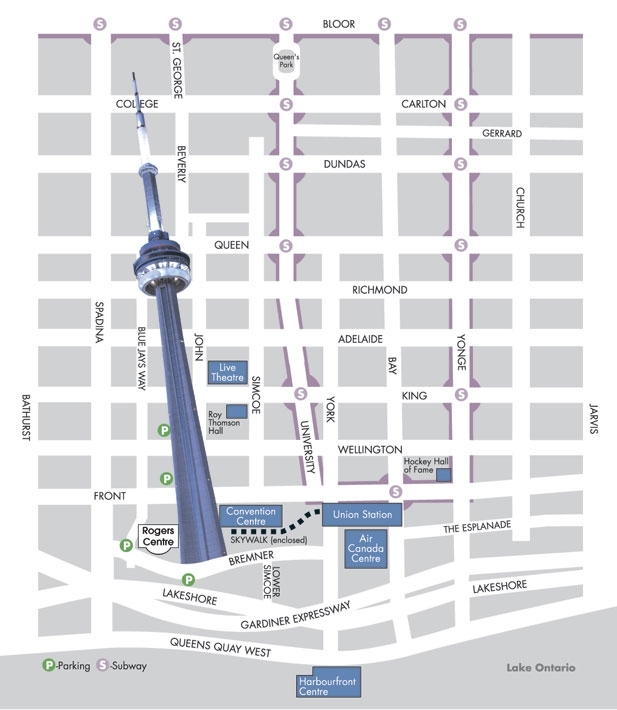 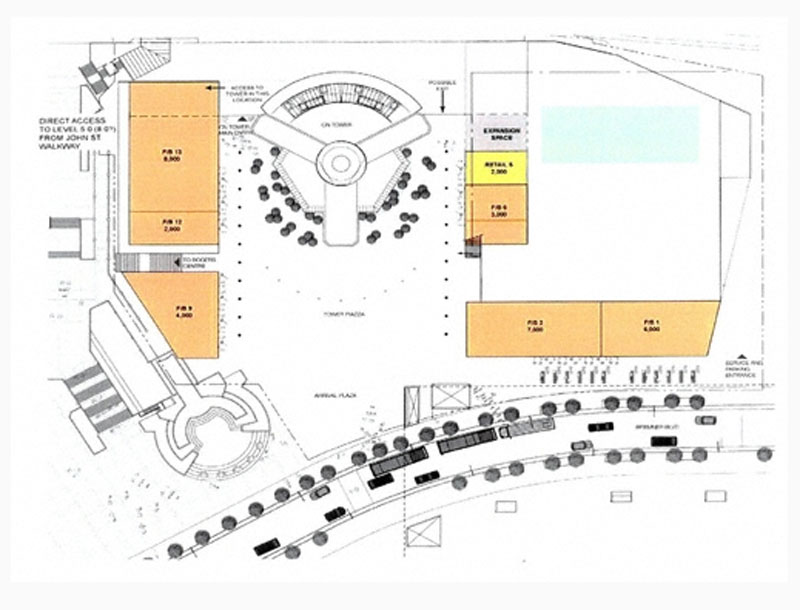 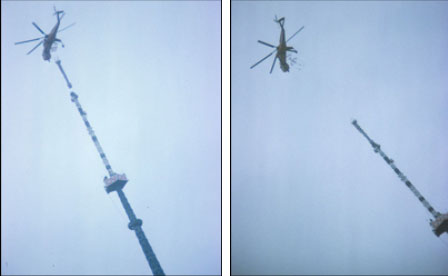 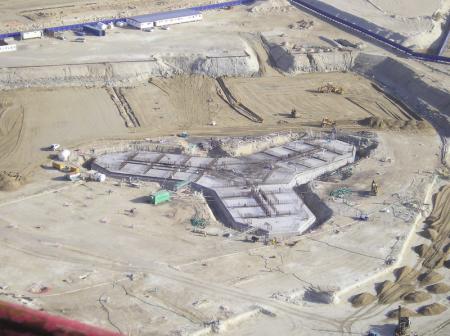 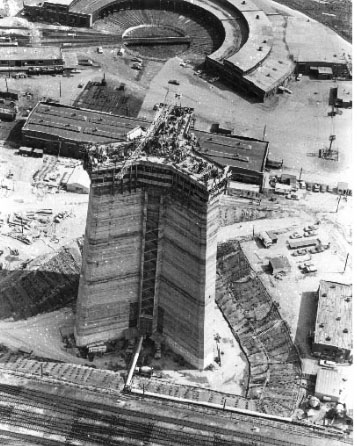 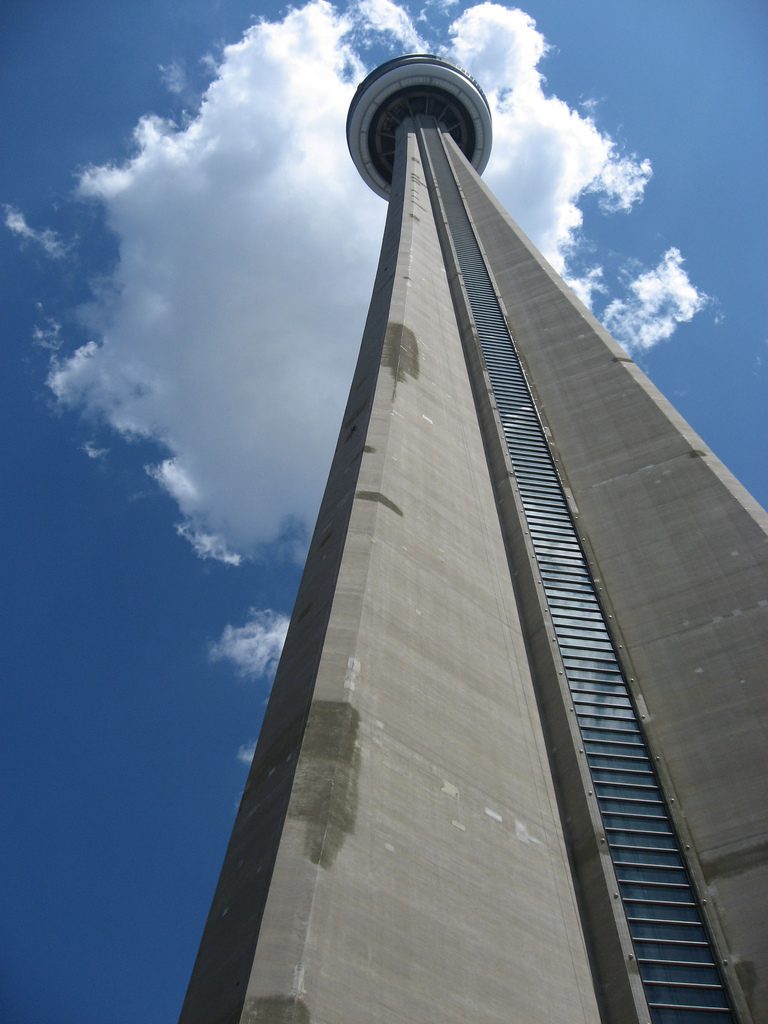 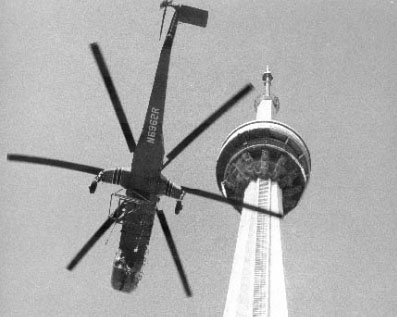 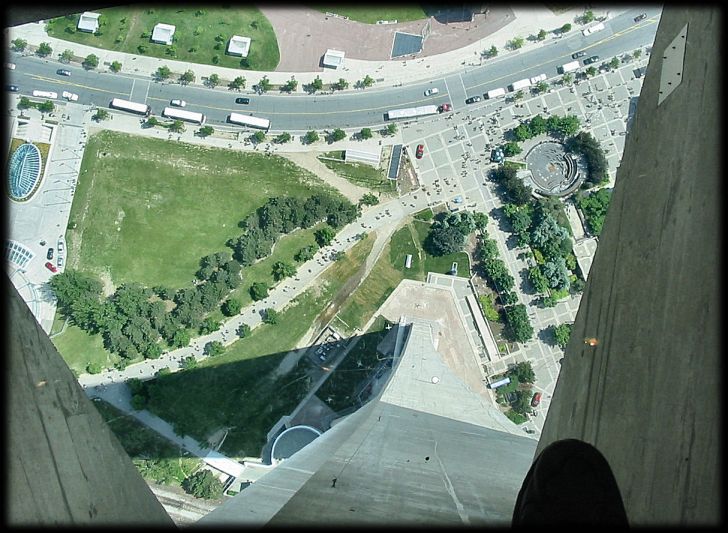 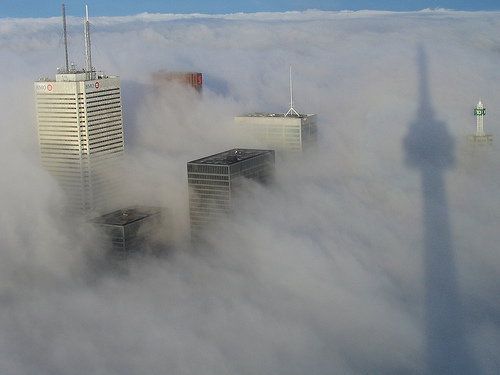 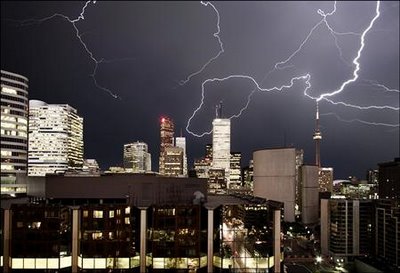 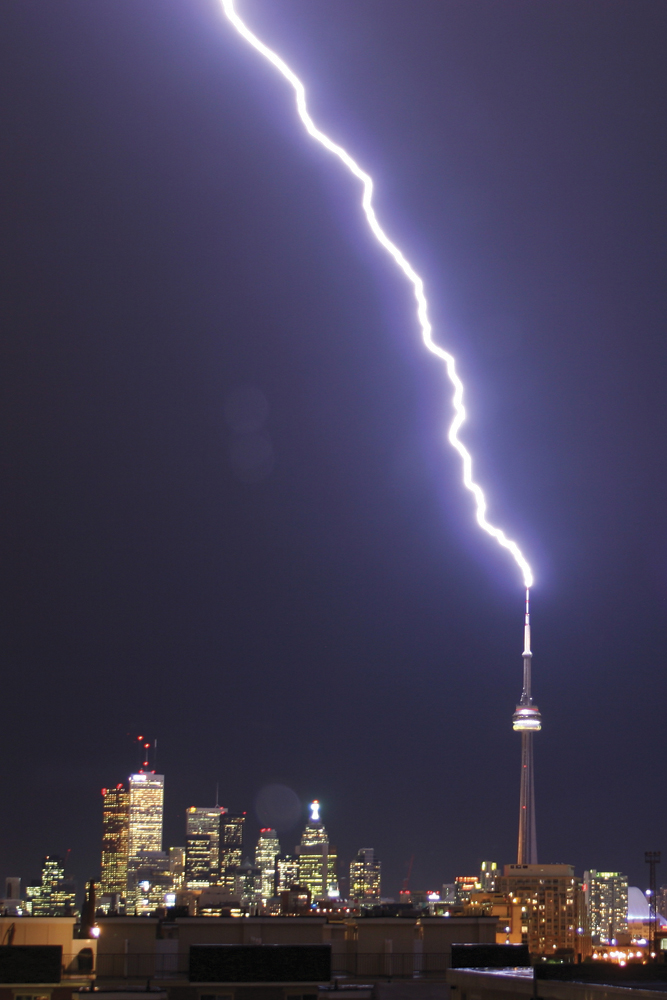 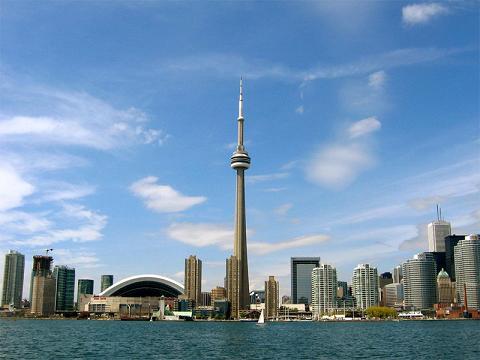 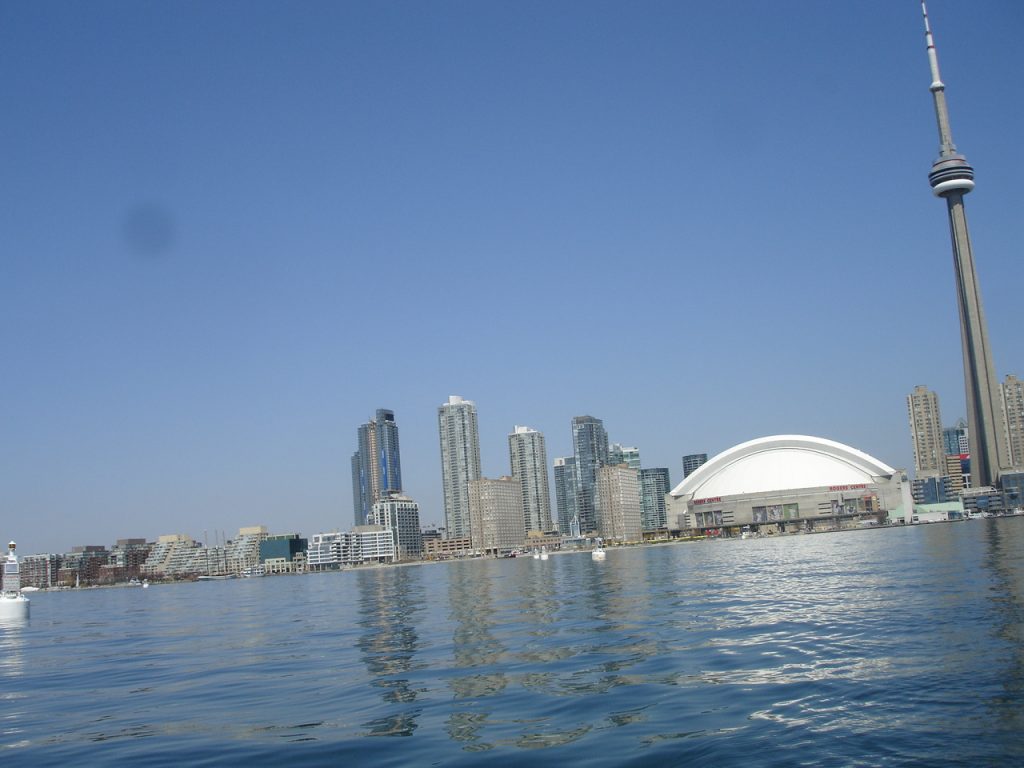 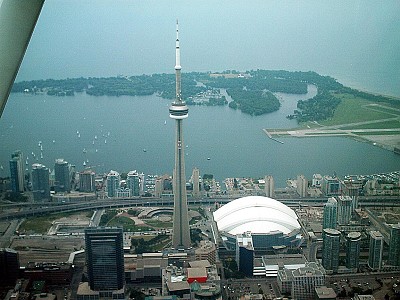 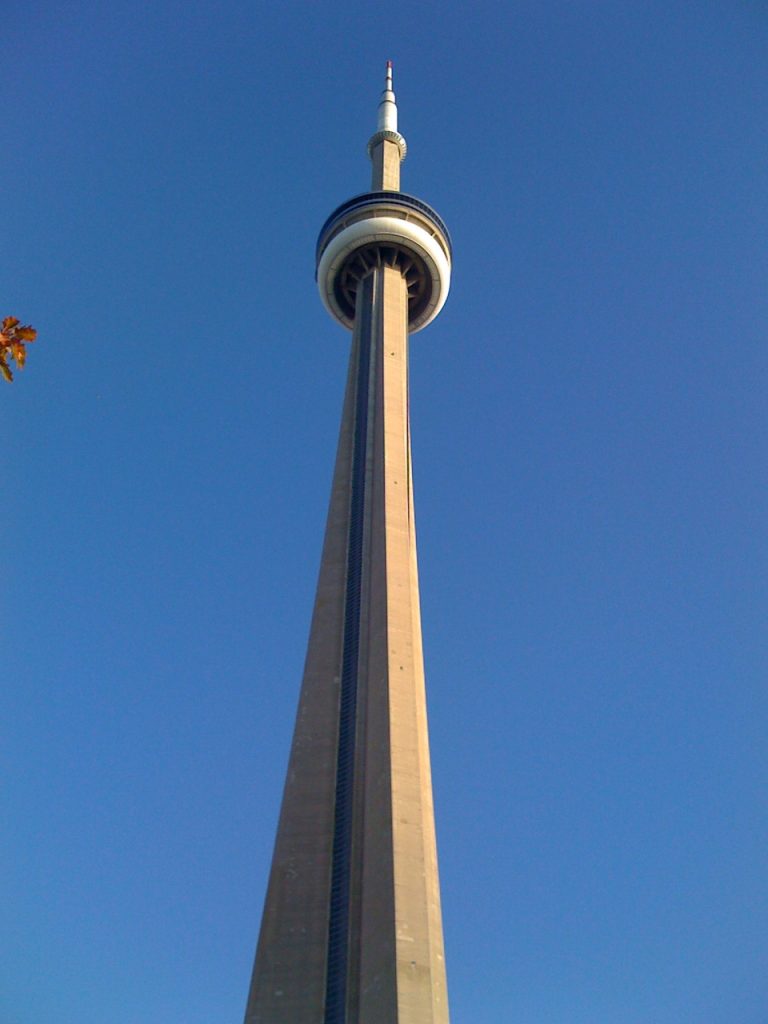 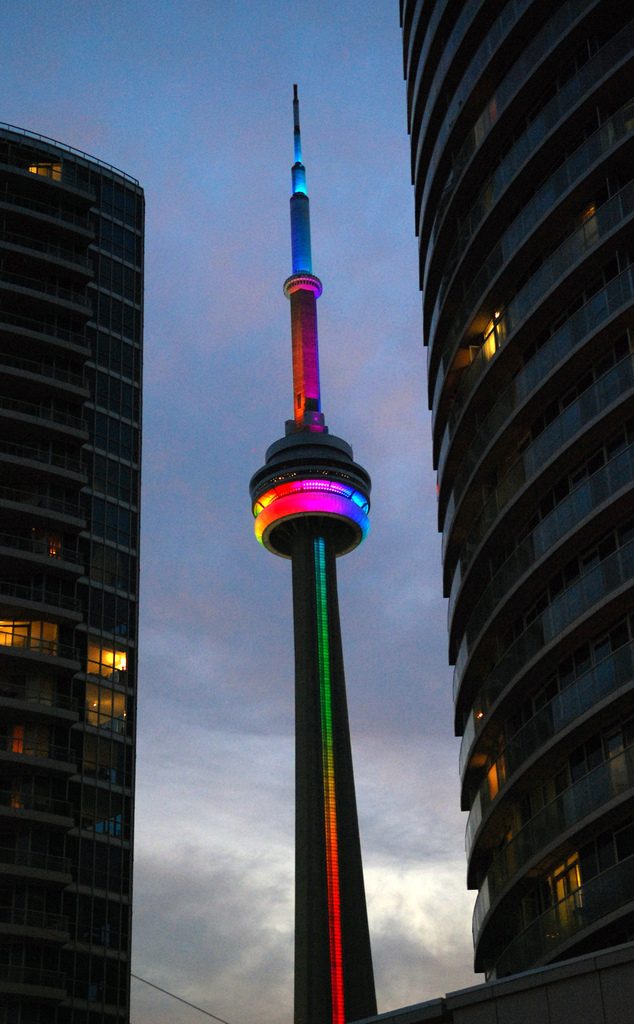 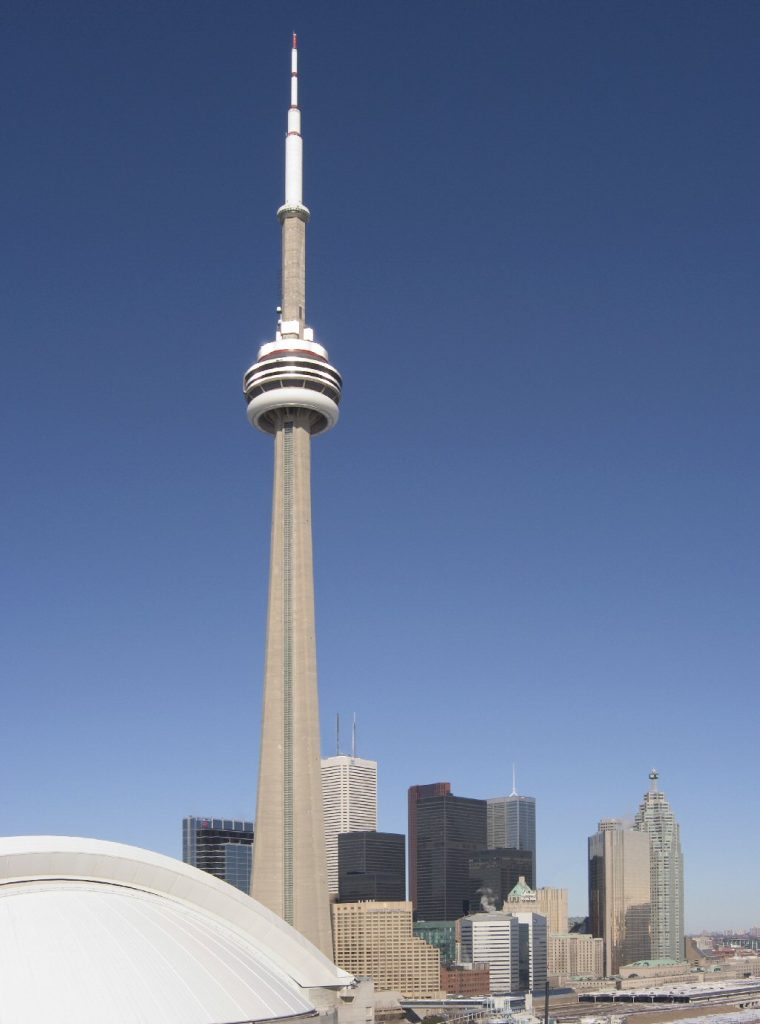 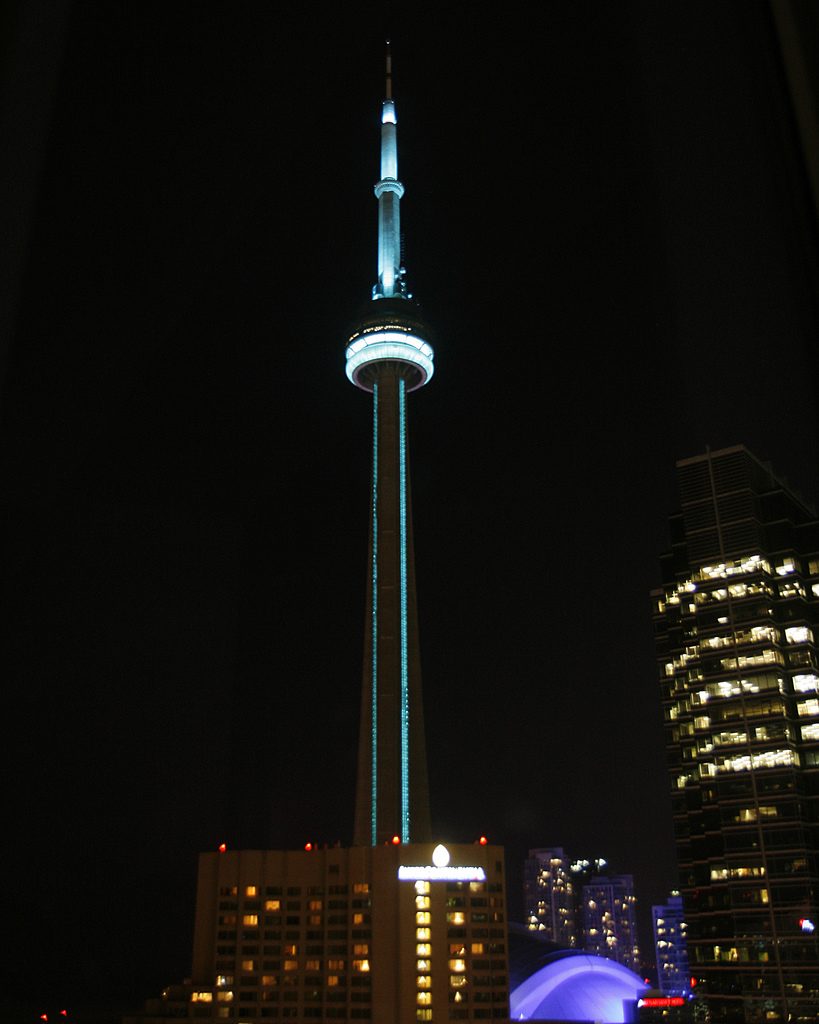 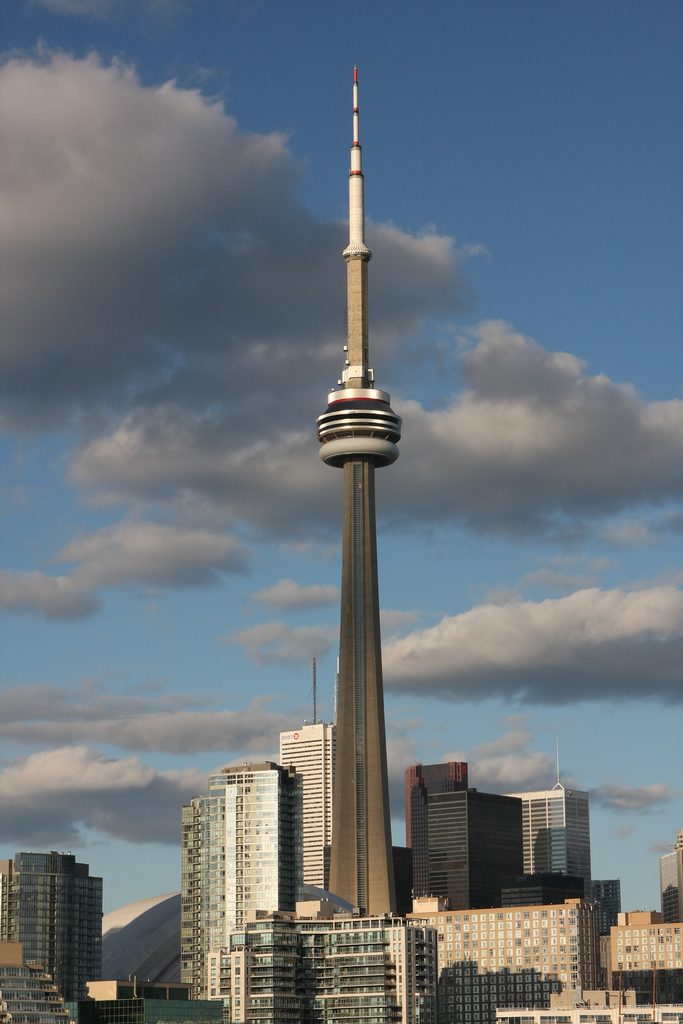 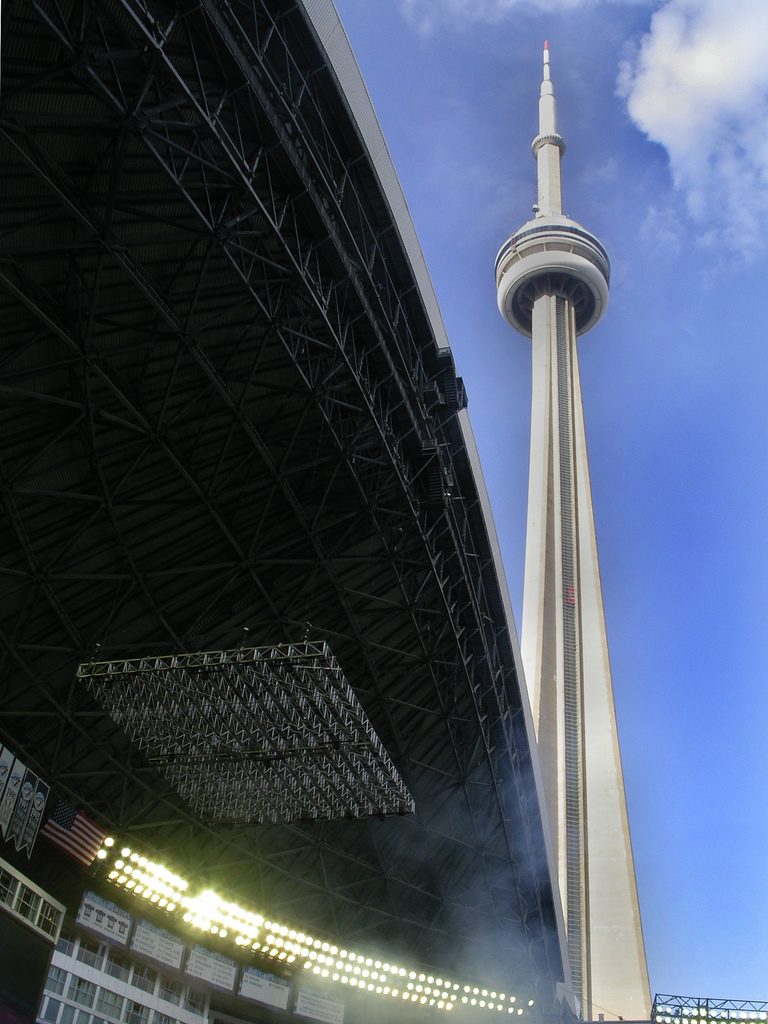 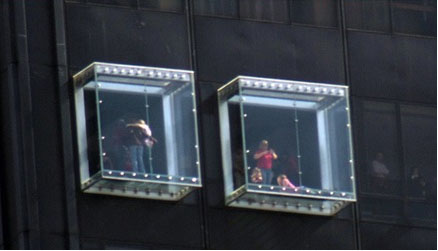 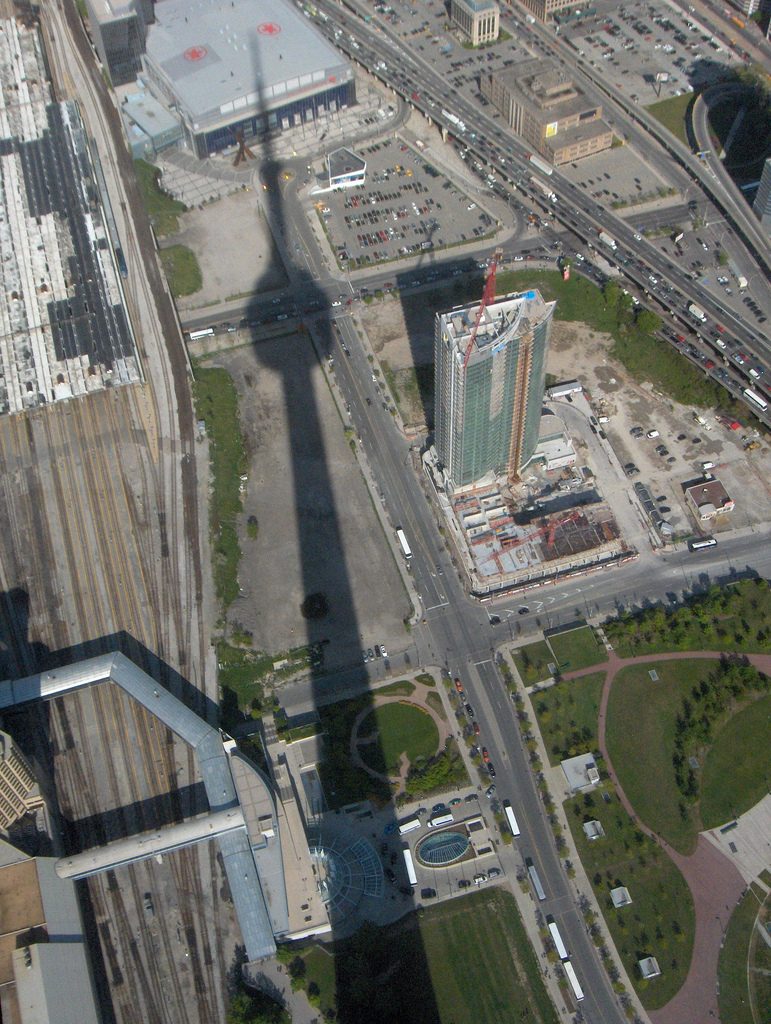 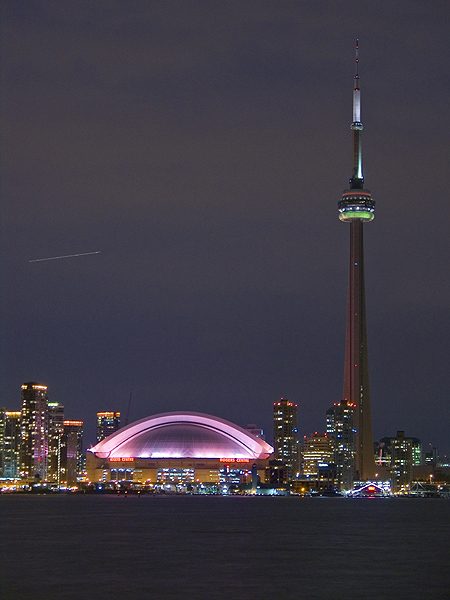 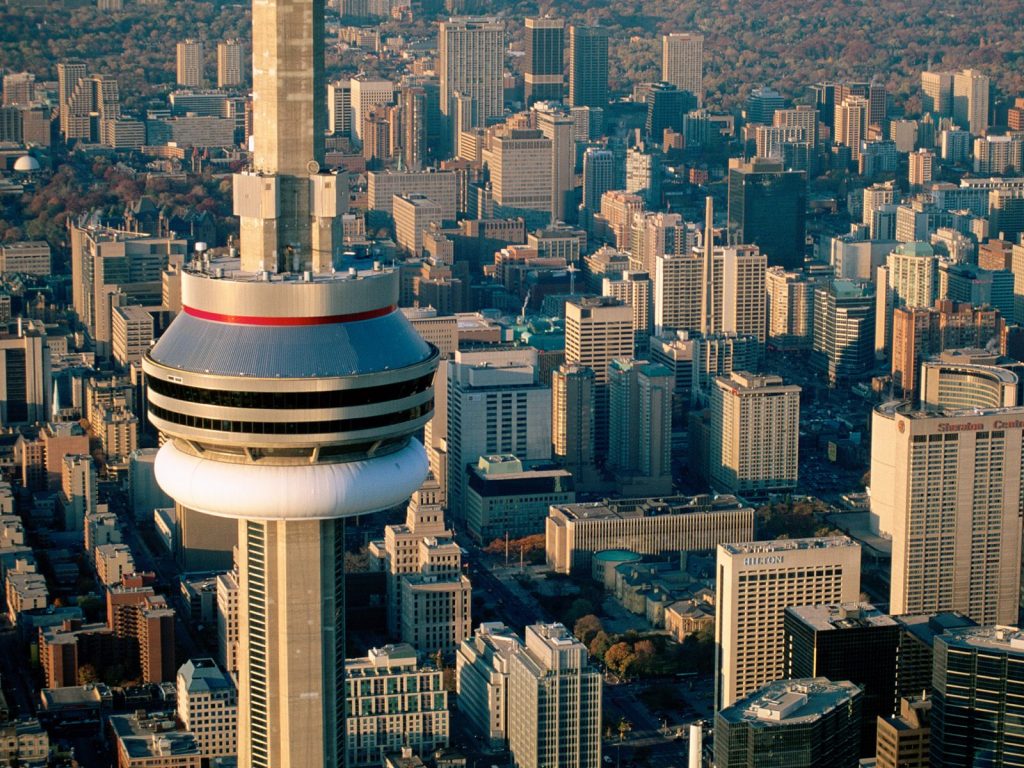 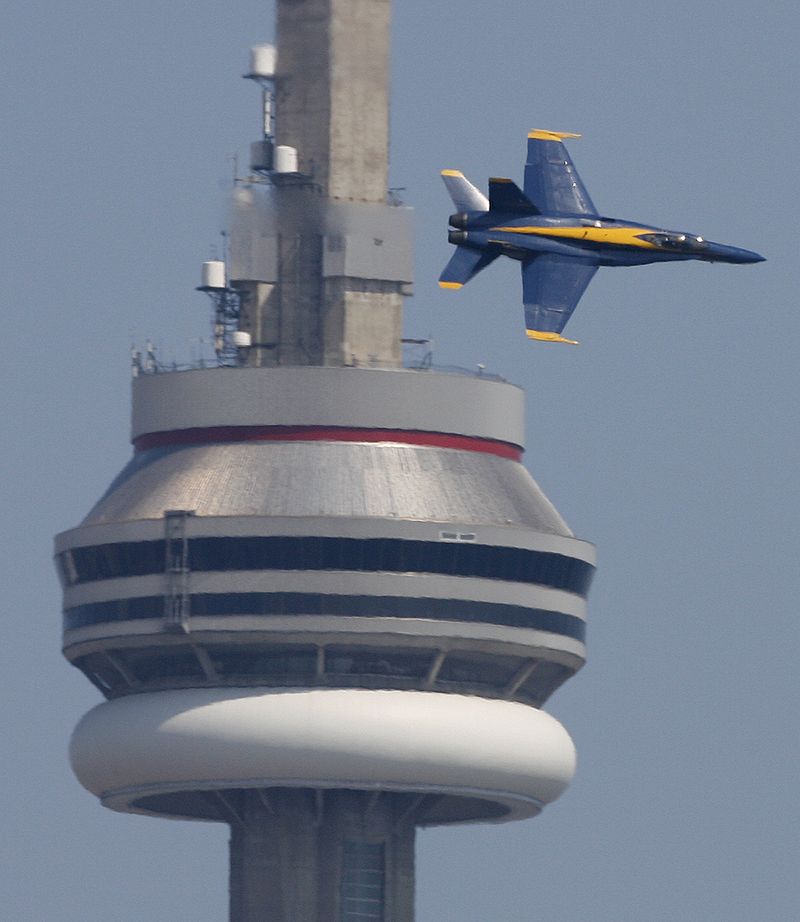 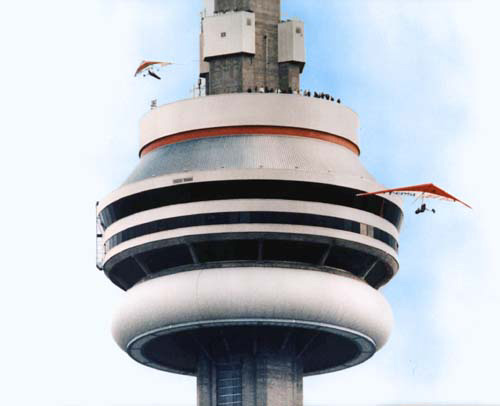