The Burj Al Arab can be defined as the hotel that accumulates more records, as it is the highest (321 m), the most luxurious (7 stars) and of course, one of the most expensive in the world, “Burj Al Arab” is the “Arab Tower” (Translation). Built in the middle of the sea, in a Persian Gulf area famous for its spectacular and futuristic architecture, and above all dedicated to tourism.

The impressive building stands on an artificial island 300 meters from the coast, opposite the Jumeirah Beach in Dubai.

Tom Wright design of the hotel reflects the seafaring heritage of Dubai, resembling the spinnaker sail of a J class yacht.

The structure of this masterpiece of architecture is made up of steel profiles and ensures its stability both for its triangular shape in plan and for the triangulation of their facades.

The hotel is accessed over a footbridge that goes into the hall, located between the walls of an artificial tank. In the middle of this space, over 180 meters high, a source emits geysers of 30 meters in height every half hour. Precious marble, walls lined with 22 carat gold and precious silks contribute to environmental enrichment.

The Burj al-Arab has no single rooms, but features 202 double suites. The smallest of these suites occupies an area of 169 square meters, while the largest covers an area of 780 square meters.

In this place, the incidence solar energy is a parameter that should be monitored throughout the year, to avoid overload of energy (electricity and heat) in the habitable premises.

That’s why it was decided to build the front facade of the hotel without glass, but of a double skin of translucent white cloth screen, stretched by the structure.

During the day, this membrane allows white light, but avoids overheating the interior, using the method of cooling by direct loss, that is, reflecting much of the energy back to the outside, projecting shadows on the premises.

The heat energy that passes the first cloth is removed by a flow of air between the two, minimizing the energy gain for such guidance. Then the central hall is cooled by evaporation of water from the pits, dropping the feeling of enclosure.

During the night, this membrane is illuminated, creating a visual spectacle both outside and in the interior space.

The Optec Projector, with the bright light of low voltage halogen lamps, shines elements of silver and crystal onto the large screen.

Around the socket of the lift and the bases of the columns in the reception area of the hotel, there are some luminaries for low-voltage halogen lamps. The unusual direction of the light coming from under it generates a high striking effect. These uplights are half of presentation necessary to achieve a dramatic mise en scene of the spaces.

In an architecture with a visual impact so impressive, exterior lighting could not not play an equally attractive role. Throughout the night,the exterior lighting of the building is changing color from white to multicolored.
The idea was to create a small spectacle of lights that enriches the construction of expressiveness and enhances its image in the landscape that surrounds it.

Tennis game on the helopad

When tennis players Roger Federer and Andre Agassi met in Dubai, the world was surprised, and not just for its fantastic game. The most amazing was that the game was over 200 meters high, at the helipad of the Burj Al Arab hotel, which seems suspended in the air at floor level 28. 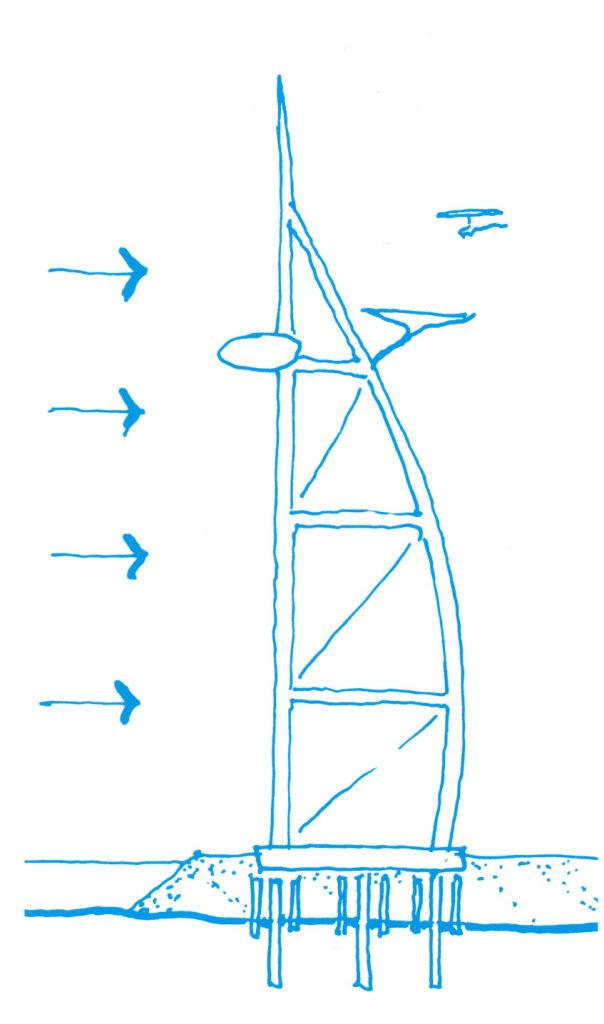 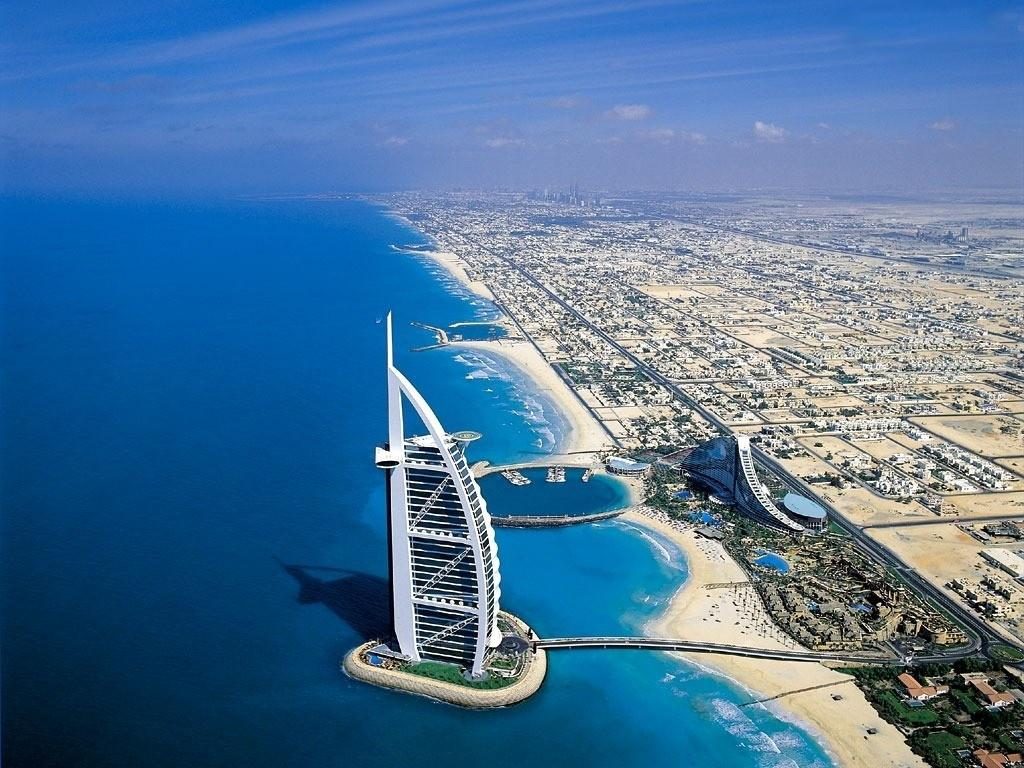 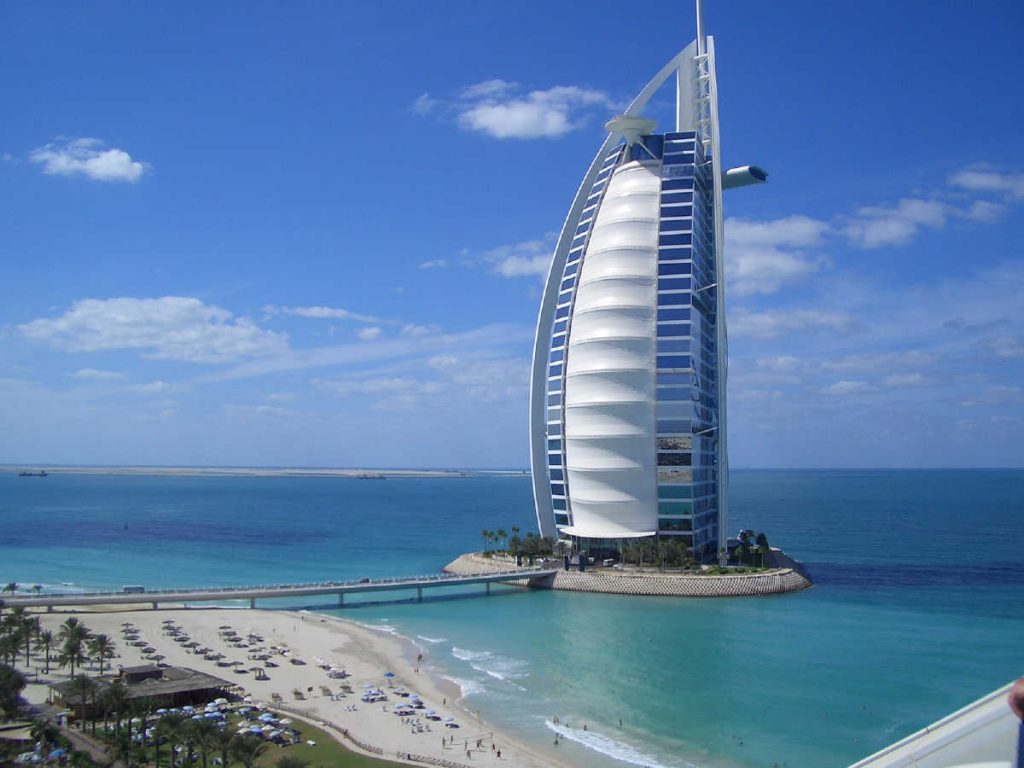 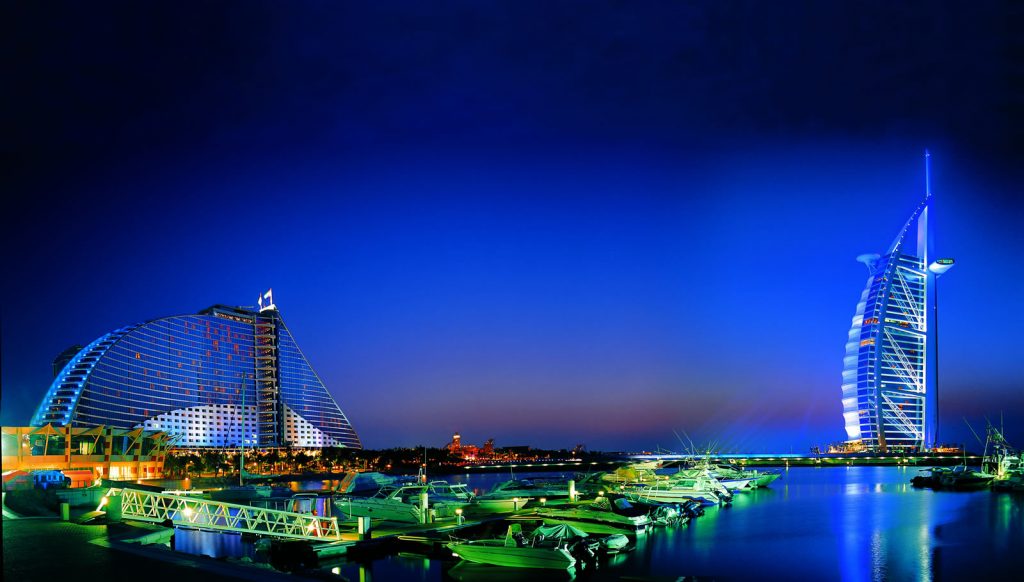 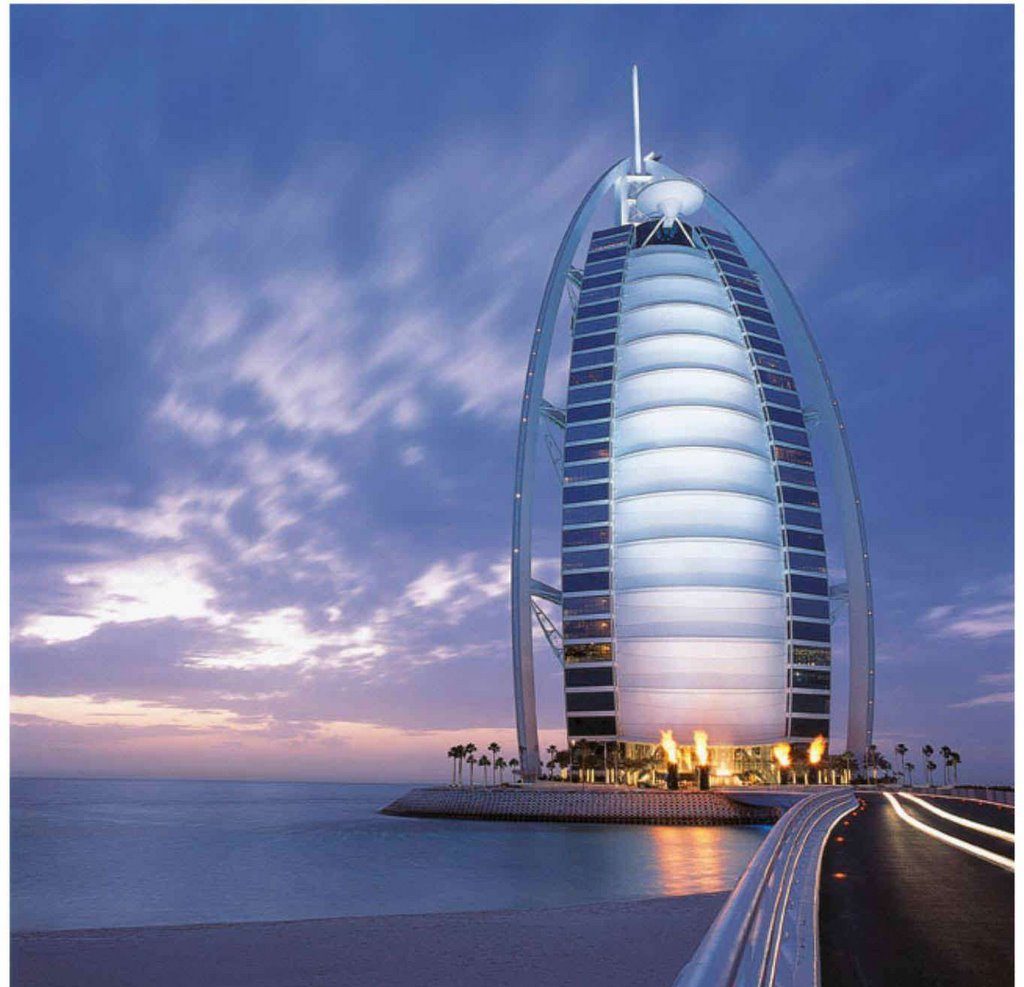 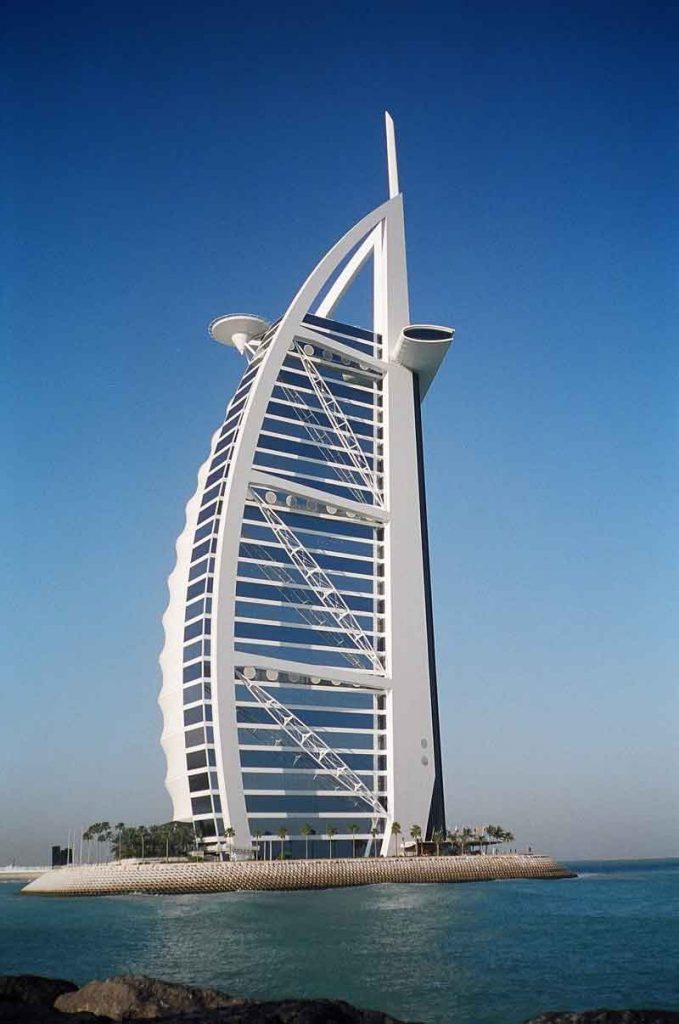 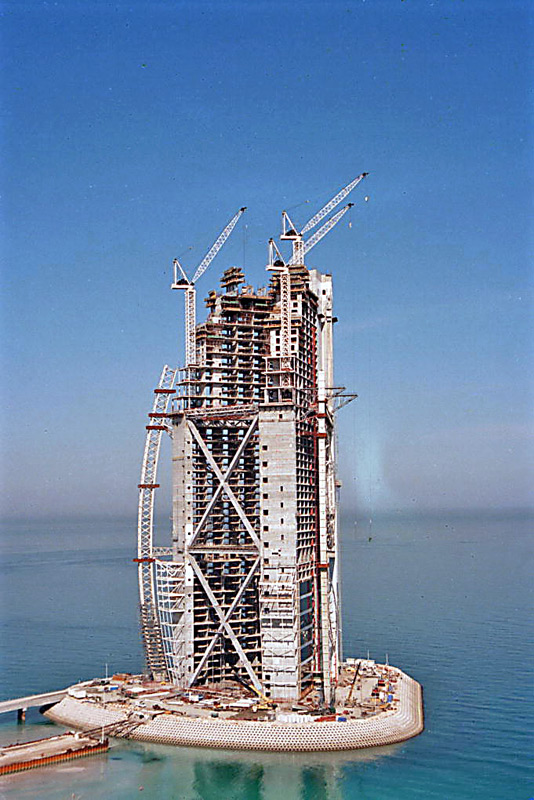 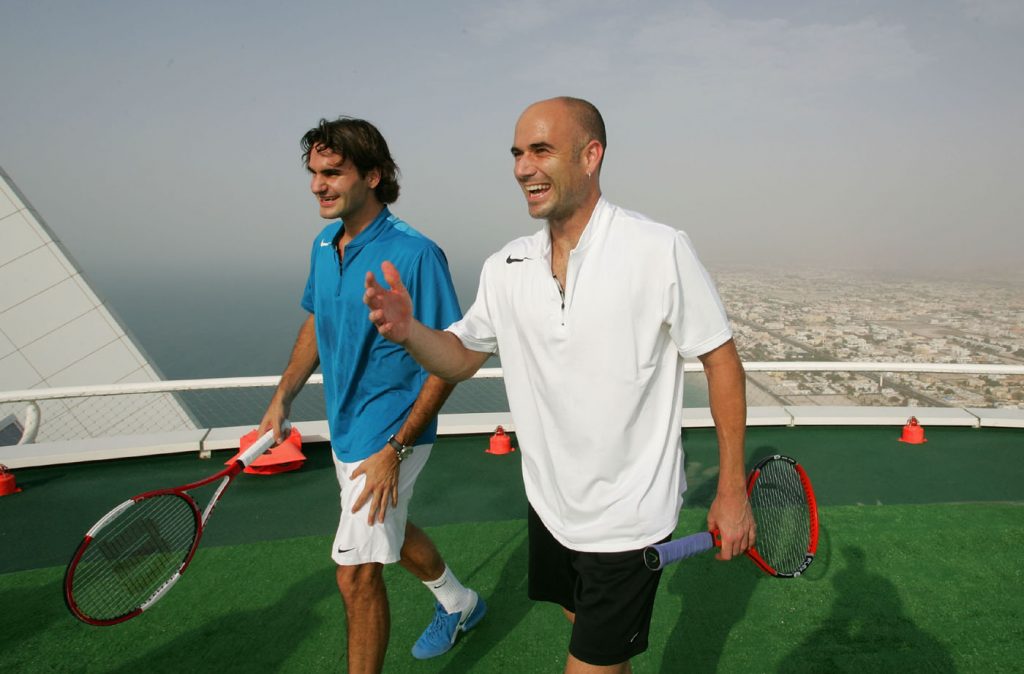 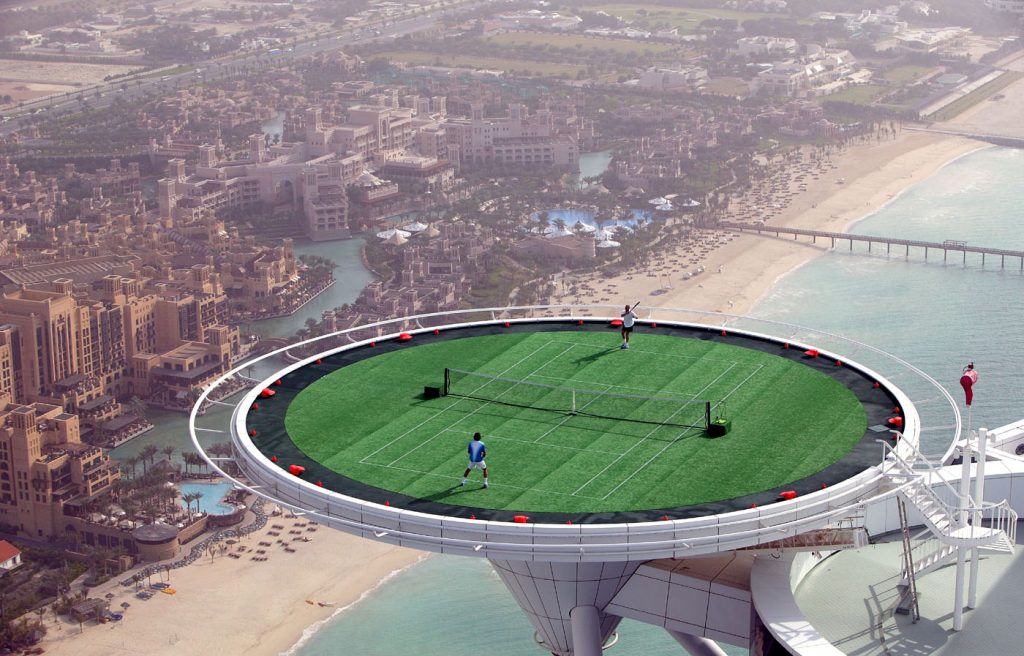 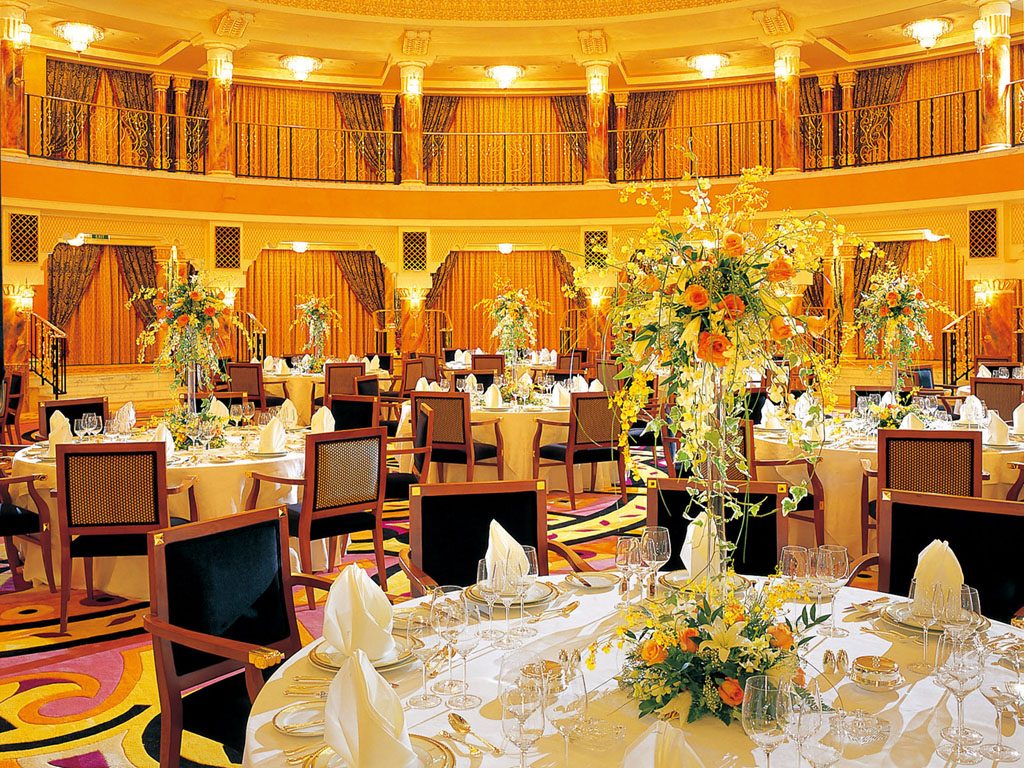 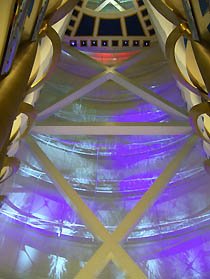 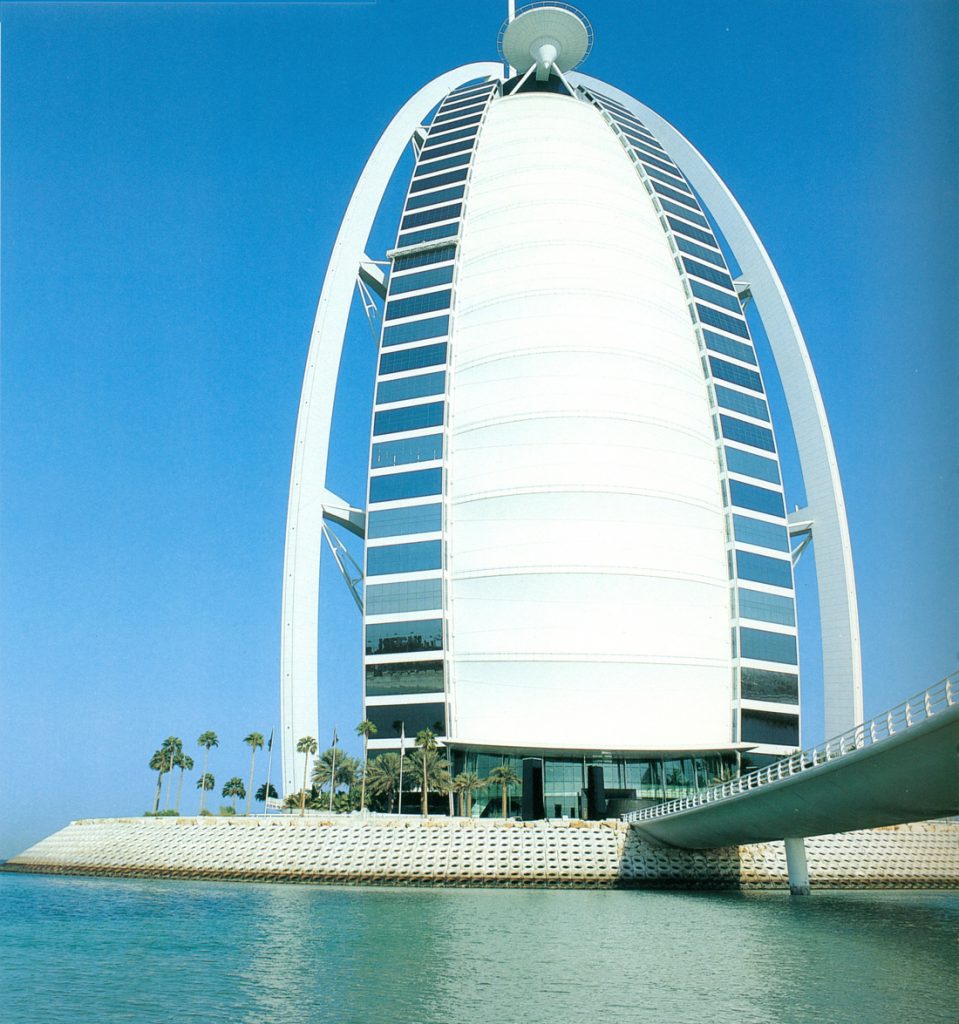 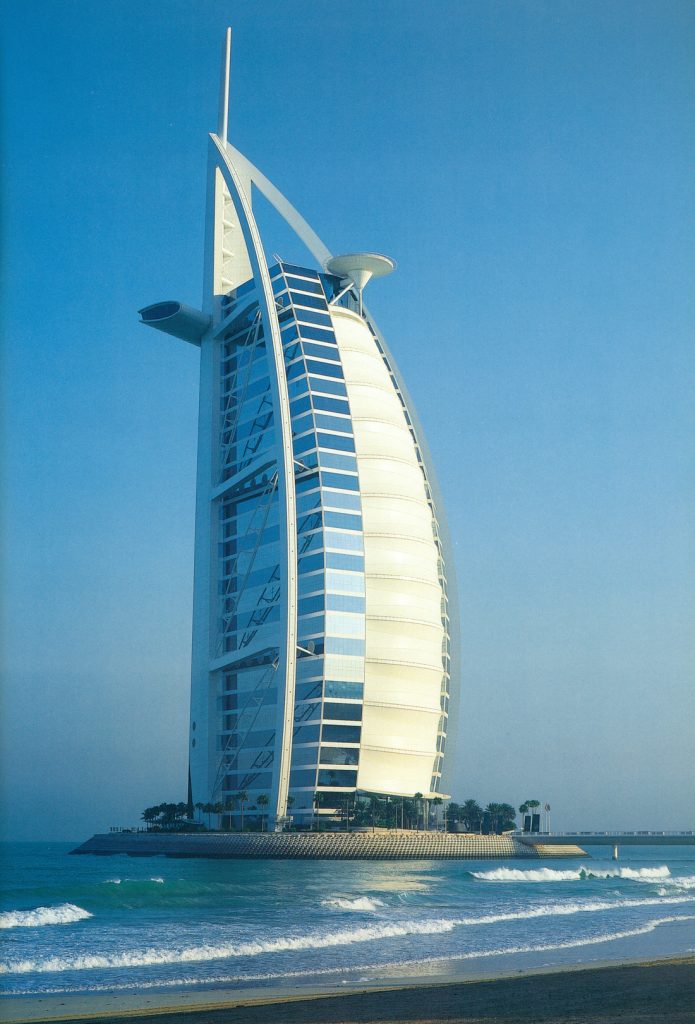