Outside the tumultuous scenario of trends and languages more ephemeral, the Madrid architect Alberto Campo Baeza Gaspar House restores the sense of architecture as a material translation of ideas and strongly expressive message.

Campo Baeza is the author of refined works that play with a special relationship between the air and light, and put in the center of the project’s continuity with the natural elements and landscape.

In the late eighties and during the nineties made a series of experimental homes, which together formed a manifesto on the use of light in binoculars spaces monochrome tones close to white. Examples of this period are the Turégano House in Madrid and the Gaspar House in Cadiz.

At Casa Gaspar, Campo Baeza has made explicit the idea of architecture that inevitably includes elements such as context, the role and composition, but exclusive, ie, essential at a formal level.

This work won a 1993 Eric Lyons Mention Award in London and in 1994, a Special Prize at the World Triennial of Architecture in Sofia, Bulgaria.

It is located in an area of low density, green areas adjacent to camping Pinar de San Jose in Zahora.

The main route of access to housing is the highway A-2233.

In the same area, near the Casa Gaspar, is the Guerrero House, another work by Campo Baeza.

Responding to a request from the principal of total independence, created an enclosure, a “hortus conclusus. With a square enclosed by four walls, is divided into three equal parts covering only the center, while the other two form courtyards. Essentially, this is a courtyard house with continuous horizontal space.

This geometry is characterized by a strong essentiality, also evident in the glazed surfaces and in the white coating.

The architect here has imitated the custom of the Greeks, who used to create a horizontal plane, a kind of podium on which to place the temples, whose arcades became a filter through which to observe the landscape.

Also in this work, as in most of those built by Campo Baeza, the most characteristic factor is the strong presence of nature, evident in the placement of lemon trees in the yard, water mirrors that reflect vegetation, the transparency of glass and white walls.

Furthermore, in order to create continuity between nature and construction, including exterior and interior stone paving extends throughout the plant, continuing beyond the windows.

They are strong connections between the closed and open space between the white and light, between the built and natural data. The white color of the walls increases the homogeneity of housing double symmetry which is accentuated by the placement of four lemons a mirror placed at the four corners of the courtyard.

In plan, the house forms a square of 18 meters, its perimeter closed in by four walls 3.5 meters high, divided into three equal units. Only the central strip is covered.

The area covered consists of three areas located transversely in relation to the courts. The central space has two dimensions over the other two spaces. On the sides are in the services. The cover of the central space is a meter high, 4.5 meters. In the intersection points between high and low walls, is open four 2×2 meter hole that is glazed. Through those four holes expands the horizontal plane of the stone floor, thus an effective inside-outside continuity.

The white color adds to the clarity and continuity of this architecture. The double symmetry of the composition is illustrated by the placement, also symmetrical, four lemons, which produce mirror effects.

The light in this house is horizontal and continuous, reflected in the walls of the backyards oriented east-west. In short, space is a horizontal, continuous, tensed by the horizontal light. 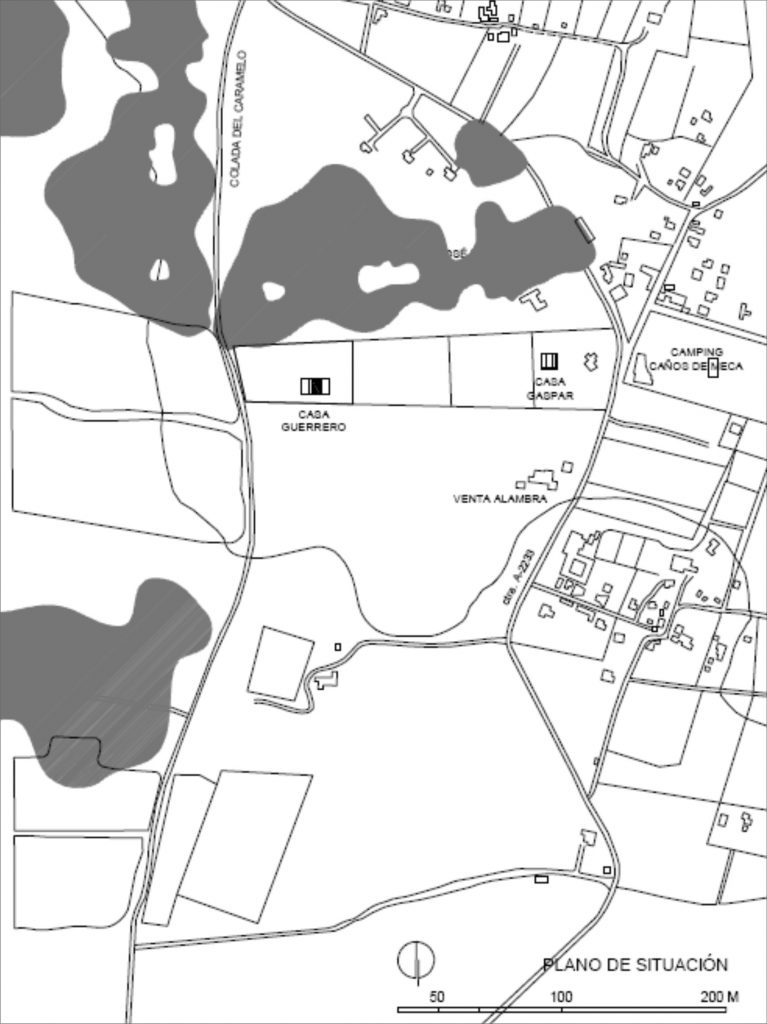 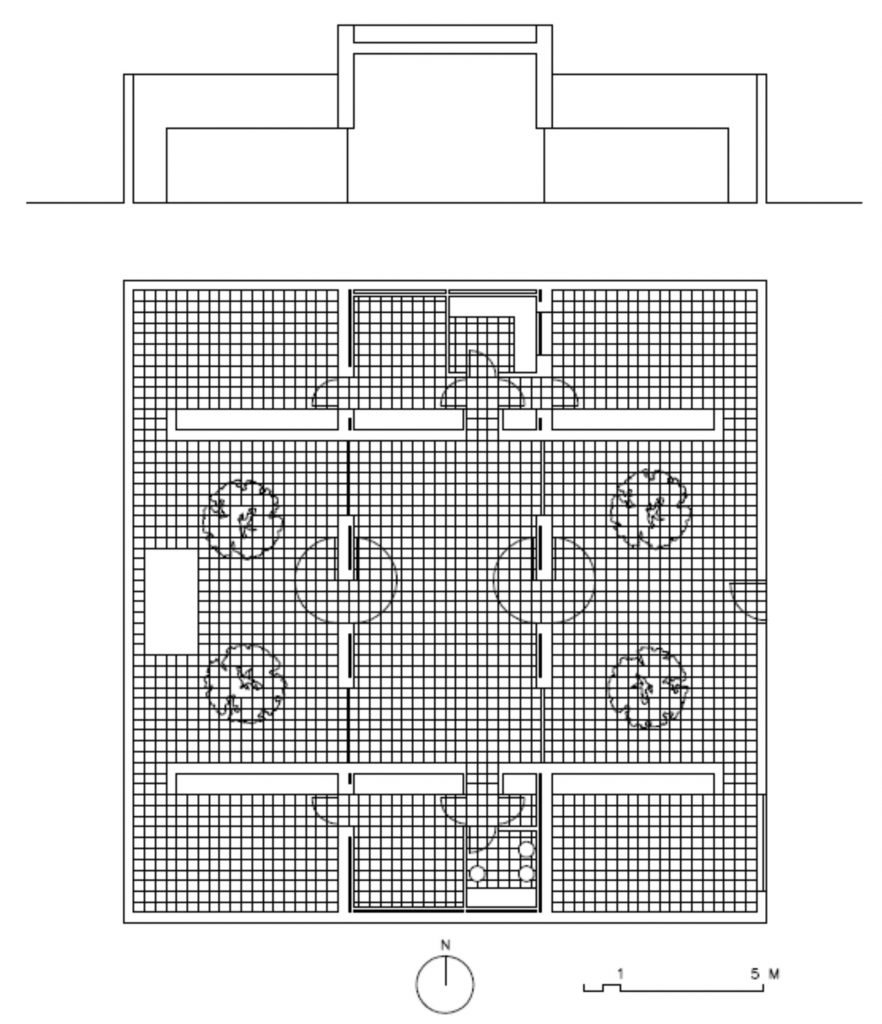 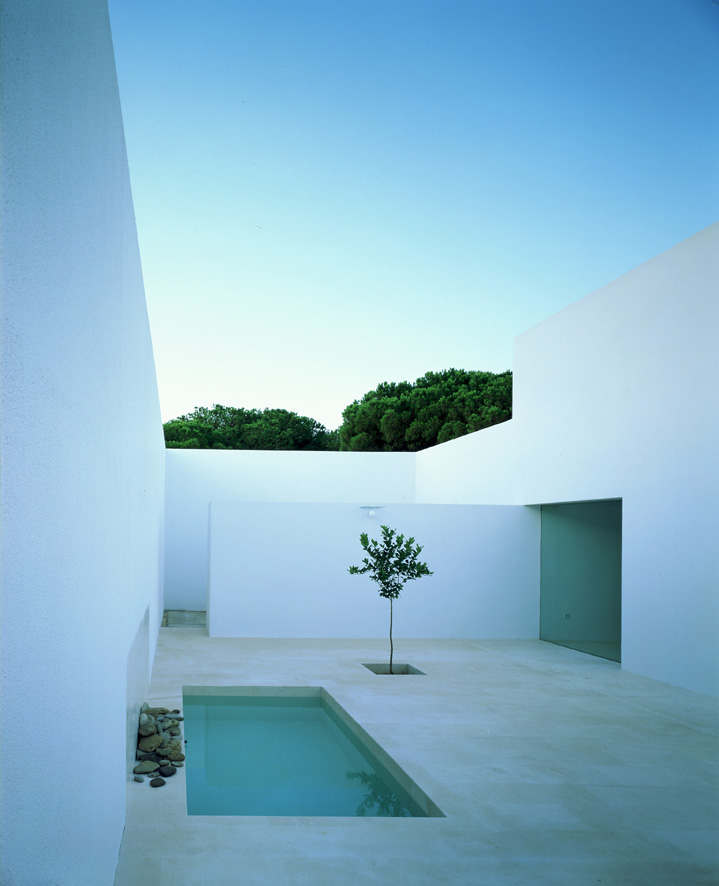 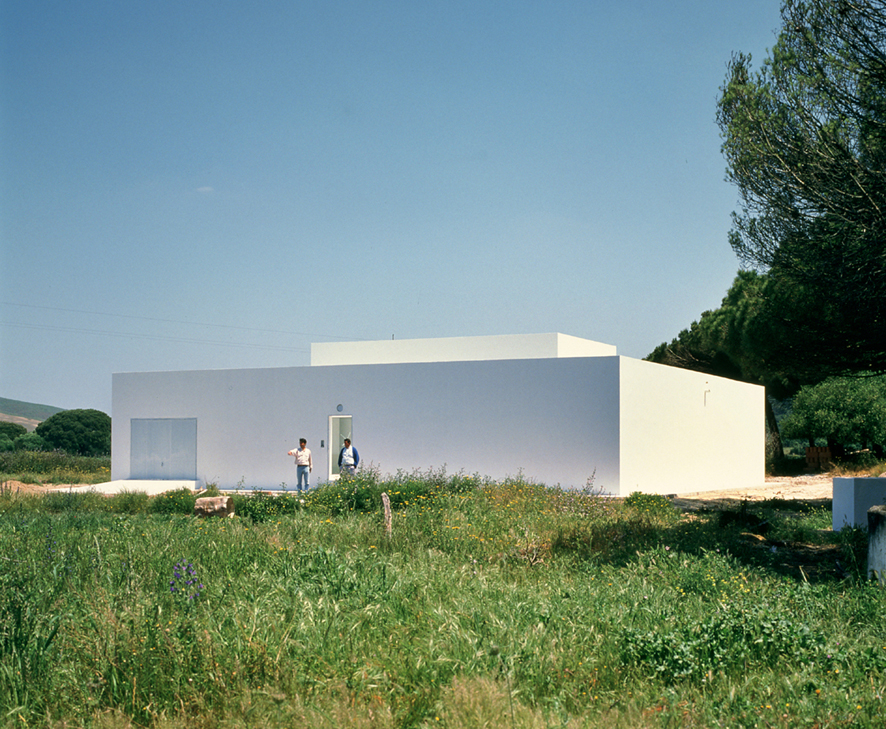 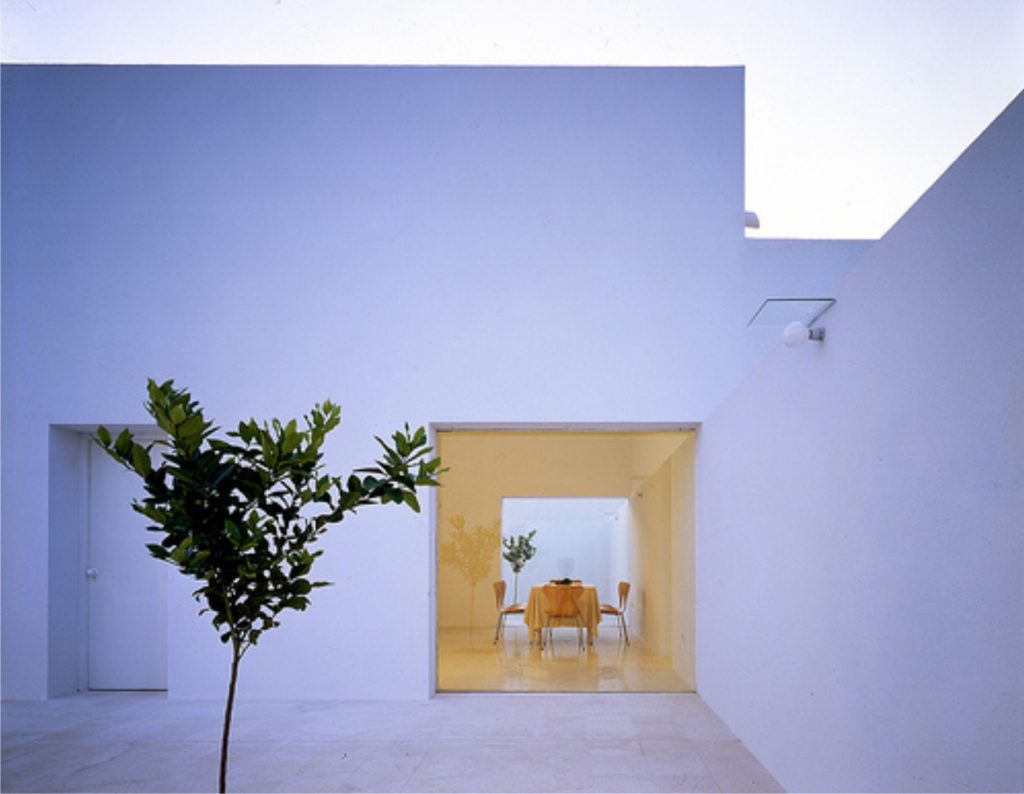 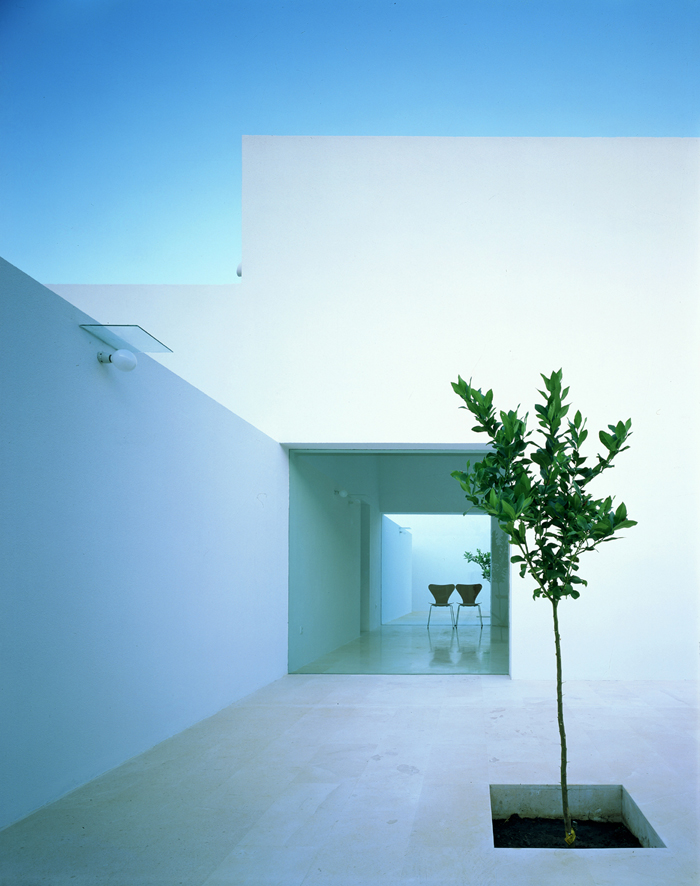 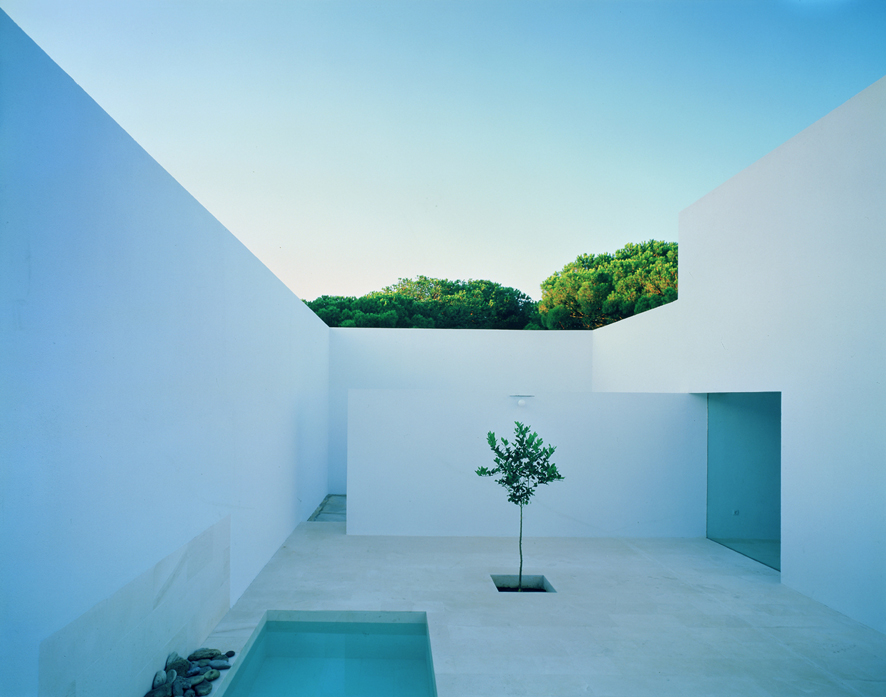 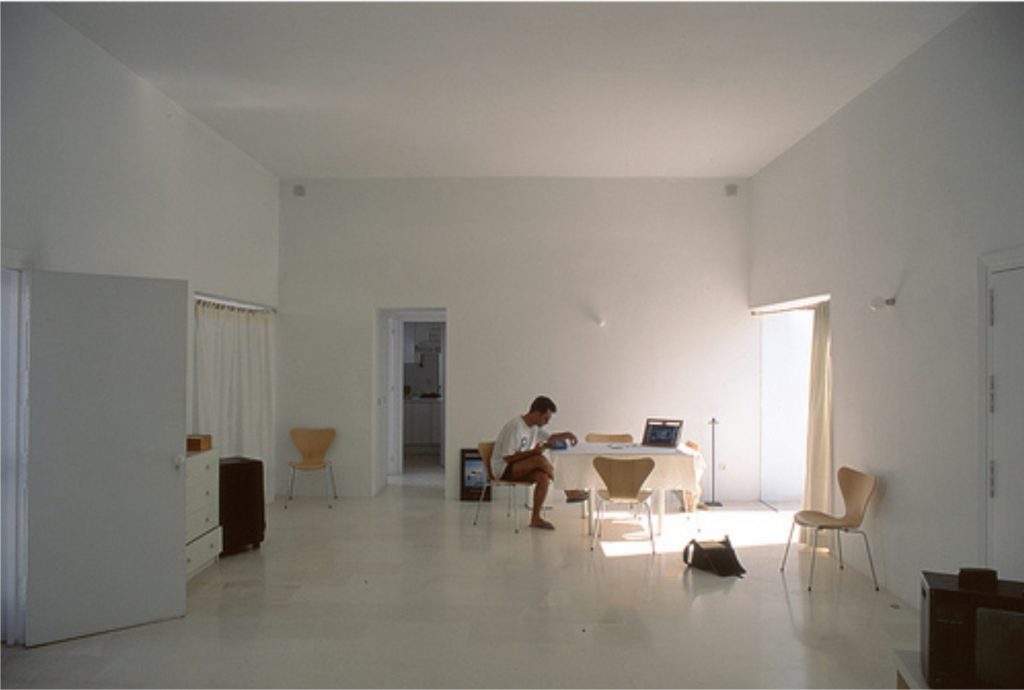 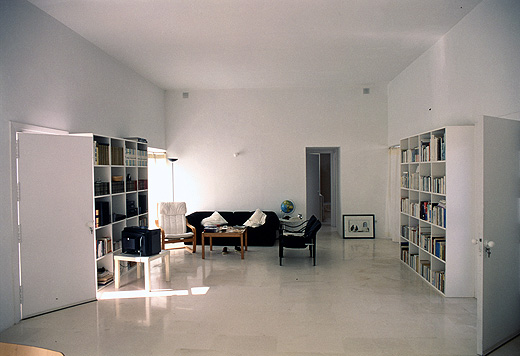