Gallery Principe di Napoli, the work of architects Nicola Breglia and Giovanni De Novellis, construction began in 1873 and was completed in 1883. Its construction was part of the urban architectural renovation that affected Europe as a result of technological progress applied construction thanks to the steel and glass. Another example of this trend is the Crystal Palace built in London in 1851 or the Crystal Palace in Madrid in 1887.

The Principe Gallery of Naples built between 1873 – 1883 is part of the first major construction in Naples after the unification of Italy, in the architectural style known as Liberty or Art Noveau fashionable at that time and before renovation “real” urban Italian known as “Risanamento” that affected large urban areas to create new streets and buildings, including the huge Galleria Umberto completed in 1890, much more spectacular than the Prince of Naples. 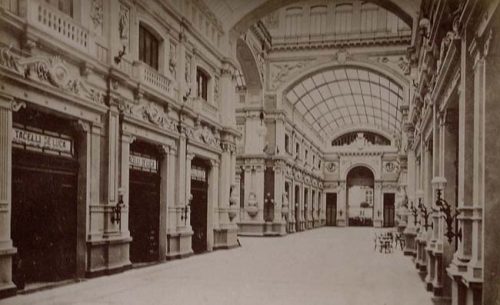 For its construction many buildings were not demolished and generally was part of a modest project to fix the Via Fosse del Grano, including the National Museum across the street and the adjacent Academy of Art. The resulting gallery was relatively small and intimate, following the model of arcades and galleries built in London and Paris. It was both a small shopping center as a social gathering place for residents of the area, including art students from the Academy next door.
The construction of the gallery is part of a phase of deep urban changes, at a time of great change in the techniques and tastes, between great political and social upheaval. In this climate the idea of ​​creating a gallery of iron and glass was a natural consequence in Naples thanks to interventions by the architect Enrico Alvino were beginning to feel.

Already in 1863 they had taken steps to improve the slope of Via Fosse del Grano, but only in 1870 plans for new construction were reinitiated. But his story begins from the initial design by architect Gaetano Genovese in 1852.

In 2007, after decades of neglect a plan for a full restoration of the gallery was presented. This includes the reopening of the spaces on the upper floors of the premises that have long been unused. It also includes the installation of glass doors on the three inputs so that the air conditioning and heating can be used if necessary.

The Prince of Naples Gallery is located between the Academy of Fine Arts and the National Museum of Archaeology, in the historic center of Naples, Italy.
The shopping center faces the streets of Via Broggia and Via Pessina, as well as the square in front of the National Museum. 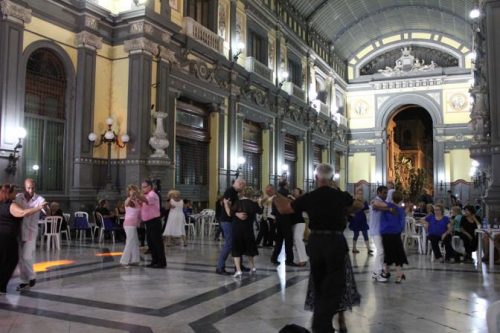 The mall itself is inspired by the arcades of the buildings in London and the “passages” of Paris.
The Galleria Principe di Napoli emerged as a response to the need to “re-clean” Naples. The city, which had just re-emerge from the ravages of cholera, was in dire need of reorganization. Overcrowding and overpopulation with narrow streets and houses wretched was the norm. However, thanks to the efforts of Enrico Alvino, Italian architect who actively participated in the Naples urban design in the mid-nineteenth century, this part of Naples was redesigned to show growth and progress as a city. The other credits architect include the restoration of the facade of the cathedral of Naples, the layout of Cordo Maria Teresa, now known as Corso Vittorio Emanuele, the redesigning of the neighborhood of Santa Lucia and the conversion of Convento San Giovanni Constantinopoli at the Royal Academy Fine Arts, among others.
With his Parisian passages and arcades London gallery was built to be a commercial center and for a time when it was an upscale shopping center, was occupied by haute couture boutiques and elegant shops.

The adjacent and untouchable Church of St. Mary of Constantinople caused the slight decentralization of the gallery since it was impossible to build a fourth wing and as a result, at the time, its construction was considered as a failure of architecture by having only three entries: from the side of the National Museum, from Salita del Museo and from the Academy of Art.
Its commercial success was never expected and the building became an architectural precedent of the city. Currently the gallery houses both private and government offices. 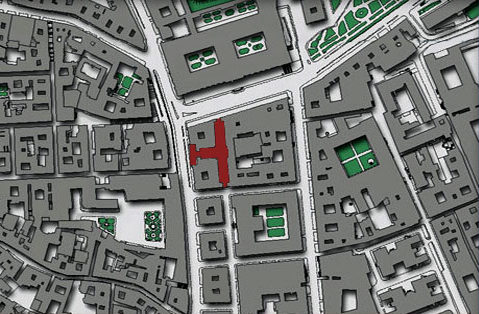 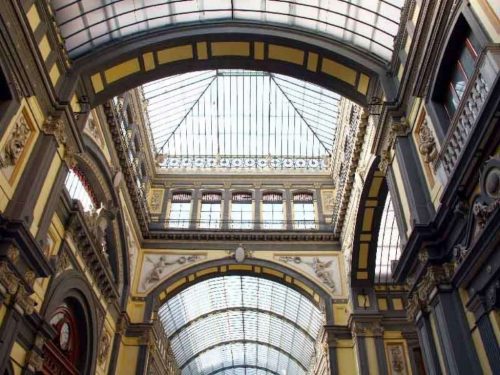 The building is presented in the form of a cross unfinished, it consists of three arms, each of which ends with an output connection with stairs due to the different levels of access. He never really contemplated in its design as a building with four wings because at the site of the fourth strip the church of Santa Maria di Constantinopoli he was. Therefore, the construction of the fourth wing never broke.
The output facing the Archaeological Museum is part of a large porch. One feature is that the steps of the three outputs have different deployments due to the difference in height between the streets of the 3 building facades.

The gallery was built with masonry, cast iron, glass roof and stucco walls. Breglia and Novellis designed it with an excellent mix of traditional techniques and modern construction.
The marble floor combines with the interior colors and ceiling plaster cast iron and glass is Liberty style.