The architect Anthony Béchu, in association with Tom Sheehan, won the competition to build a tower in place that becomes vacant after the demolition of the Veritas Tower. Work began in late 2010.

The ovoid shape of the D2 tower has become one of the most original achievements of La Défense offering an innovative architectural form to change the traditional geometrical combinations. With 37 floors and a height of 180 meters, the D2 Tower is the tallest structure in the district, but one of the most distinctive pattern through the outer structural designs reminiscent Norman Foster.

The architectural project won the 2015 Award for ArchiDesignClub Offices. The tower was completed in December 2014 and inaugurated on January 27, 2015.

D2 Torre is in the heart of the business district of La Defense, west of Paris, France, which was above the office building Veritas. 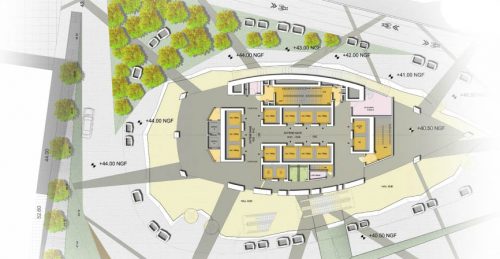 Around edificos other iconic as the famous lie Arch of La Défense, renewal of CNIT or the new headquarters EDF Tower.
Its silhouette, with a height of 180m, offers three different fronts: a thin facade facing Paris, the profile is triggered on Courbevoie and the curved rear perspective focuses on the ring road.

Like other projects Renewal Plan Défense bordering the North Circular, as the Carpe Diem Tower, the Melia Hotel or the Air 2, the D2 tower is designed to establish a link between the La Défense and the beltway, but also, more generally between this area and the district of Courbevoie.

The D2 project was designed to evoke the “live” aspect of the whole development of La Defense, both in terms of internal architecture as the immediate environment. The oval shape and structural design of the tower establish a harmonious relationship with it and were the result of the optimal mix of integration to the site, the right height and the establishment of a facade with repeated geometric shapes that establish a maximum structural efficiency. According to some critics its shape evokes a “squashed gherkin”.

This scheme is aimed at the inclusion of the new tower next to the ring road in La Defense, an area with high density occupation. As such, illustrates the dynamism West Paris as one of the main contenders in the race for global position. The increase in density is accompanied here by a general improvement of public space in order to connect the area with the neighboring communes.

Unlike Torre Agbar of Barcelona or 30 St Mary Axe (The Gherkin) of London, with which it has been linked forms, D2 does not have a cylindrical shape, it is rather ovoid. One side of this wedge-shaped tower is aligned with the ring road, while the other describes a convex curve. Both come together to create a sharp edge that rises vertically as a powerful signal

The straps that cross their facades, with 180m of height and 37 floors, have a point of light at each intersection helping to give life overnight. At its top is a garden outdoors.

The supporting facade forms a whole with the structure of the tower, especially with the core. As a result, the steel mesh is located behind a coating that provides thermal insulation.
Designed to scale, both the city and the dense structure of the tower, the mesh forms an irregular shape with large diamond openwork frames, which can be played as if they were the trunk of a tree.

The facade is narrowed marginally in the base, on all sides, to expand the domestic public area behind the lattice, like the Re Tower in London, while the top floor is close to house a garden in the open, cross above the structural beams of the facade, as whalebone and surrounded by glass.
The curve and semicircular crowning the building covers the entire footprint of the tower surrounded by a wall of transparent glass as an alternative to reflective surrounding the facade and gives it its strong character.

At the bottom, the foundation seeks to define strong links with public spaces around interconnecting several small, level with the ring road seats. This provision is a fluid and open platform that accommodates a cafe and a sports facility. Inside, a large room “in-out” with two levels and completely surrounded by glass staircase descends to the road. It also has a restaurant.

Its 37 floors connected by 17 lifts, are devoted to offices, with a floor to ceiling height of 2.80 m, plus 3 levels of basement offering 330 parking spaces. 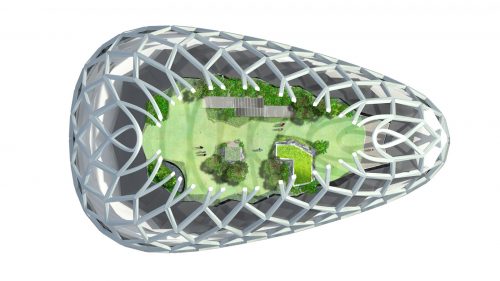 ‘Garden in the Clouds’ 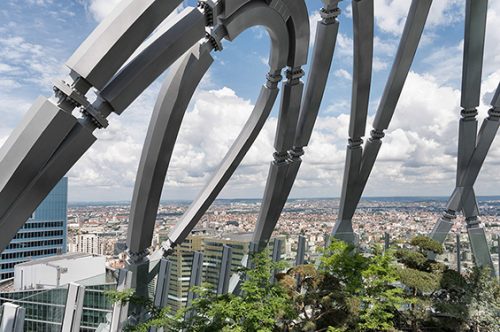 One of the most attractive spaces is located on the top floor of the building, the Garden of the Clouds, a green space of 384m2 with two levels, Zen decor and an exceptional view of Paris.
A 171m from the ground, where converge the tower arches of a Gothic cathedral as it were, the Garden inspired by ancient Babylon was installed. The decor and plants have been carefully chosen to support specific environmental constraints at that altitude, especially the wind. The garden is accompanied by innovative technical solutions: in summer in the form of droplets fog covering the garden for the convenience of visitors and vegetation, recalling the mountain ecosystems.

The structural design of the tower comes from the balance land constraints and the desired optimization by designers. To optimize the project, a steel exostructure result of work and collaboration between architects Anthony Béchu and Tom Sheehan of the architectural and engineering DVVD Vaniche Daniel was chosen. With this structure, the architecture unfolds and is expressed by the elements that guarantee stability, the outer skin become carriers, as well as the structural core of the tower. 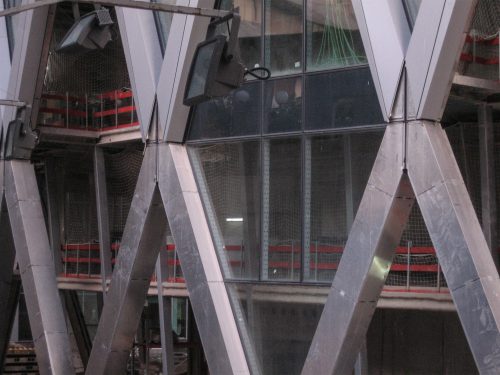 D2 Tower is the first tower in La Défense having this type of structure, with addition of a reinforced concrete core, a grid of bearing outer steel also. With a total height of 180m tower it is designed to accommodate 3,700 people in 37 plants.

In designing the geometry of the tower, the radii of curvature, and therefore modules front mesh is minimized. The variable part, the elevation, in order to maintain regular trays to three quarters of the tower. These elections have contributed to the project economics as well as the choice of steel the most suitable material to make the grille, in order to optimize the inertia and bracing, reducing construction time with prefabricated parts. To address the problems associated with thermal bridges, the metal mesh is placed behind an insulating hood.

Since the core of the tower reinforced concrete slabs are born that extend to the fully glazed and surrounded by a frame with a diamond pattern metal strips which have a width of 4.05my descend with different inclinations facade. The discrepancy between each strip opens solid faces enclosing structure and reflect daylight in the core of the slabs 37 forming plants.

Innovation outwardly represented by the use of an outer exostructure, is also pervasive within the tower by installing an elevator system TWIN first in France. Two separate cabins that reduce employment in the concrete core for office space. Furthermore, the use of the most advanced technologies in the field of green building provides excellent environmental performance of the building, getting the HQE and BREEAM certification.