Epad In 1982, at the initiative of French President François Mitterrand, convened the international architectural competition Tête Défense, which showed 424 architects from around the world. The future building will become a flagship in the historic axis Paris, as the building of Louvre Museum or the Triumphal Arch. The jury selected four projects but only one managed to win for its strength, simplicity and purity. The winner was an unknown architect J. O. Von Spreckelsen.

The ” Arche de la Défense “, winner of the contest, open cube structure can not be considered a bow in the traditional sense but nevertheless construction began in July 1985 with no less than 2000 workers. After Spreckelsen death in 1987, his partner, the French architect Paul Andreu, completed the job.

The Arch of Defense is located in the district of La Defense, west of Paris, France and belongs to the communes of Courbevoie, Puteaux, and Nanterre. It is one of the major business districts of Europe, comparable to the City of London, and consists of a set of towers and skyscrapers, some of them belong to major national and international companies, others are used as a residence.
The hanging gardens and sixty works of art make it a true open-air museum and a walk very appreciated by the 300,000 people who live or work there. Currently is the largest business district in Europe. The area is accessible by subway line 1, station “La Défense – Grande Arche “. 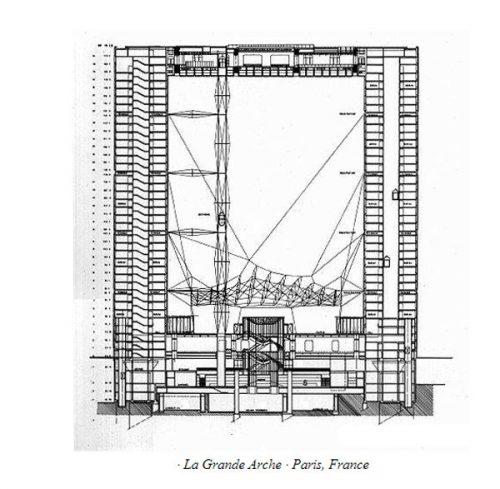 Otto Von Spreckelsen devised this monumental arch steel and glass responding to the idea of extending the historical axis of 8km, after being born in the Louvre Museum, continues through the famous Jardin des Tuileries, the Obelisk, the Champs Elysées, and the Arc de Triomphe, culminating at La Défense. The esplanade also known as ” Le Parvis ” allows us to explore the surroundings and admire many squares, fountains, gardens and art among which ” Stabile ” of Alexander Calder or ” Le Pouce ” Cesar Baldaccini, making becomes a huge open-air museum.
The architect designed the winning design for it to be a twentieth century version adapted to the Arc de Triomphe, a monument to humanity and humanitarian ideals rather than military victories.

La Défense and the Arc, on top of a small hill, engineering symbolize power and French industry, always proud of its technological advances. But beyond the wealth and prosperity that it holds, what is interesting is the apparent futility of Arc. Its originality seems an invention inhumane, but it is precisely in this inhumanity where lies its beauty. It places the viewer in his biological smallness.

Of the 80,000 m² 200,000 m² built government offices are located in the two side walls of the gap, rising 35 floors.
The top contains a conference center and exhibit space, a computer museum, a restaurant and there was also a vantage point from which you could see the district of La Défense and the west of Paris. Some of these facilities are open to the public and are accessible by elevators. Elevators are glass and are located in the hollow part of the arc. 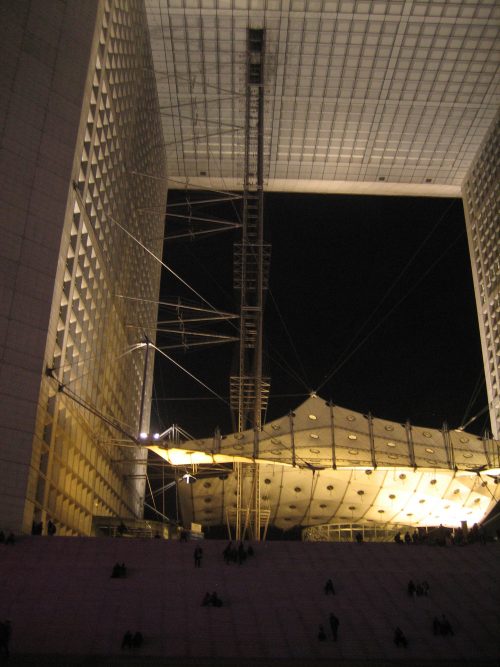 Until 2010, the glass elevators leading visitors through the “cloud” to an exhibition area on the roof of the arch. The three-level terrace is organized around four courtyards. The floors of the courtyards are decorated with the “Carte du Ciel ” ( sky map ), a work by French artist Jean – Pierre Raynaud. Each of the four areas is a part of the Zodiac.

Stairs lead to the observation deck at the top of the arc, where visitors could have a unique perspective on Paris. If weather permits, you could see the entire length of the Via Triumphant, all the way to the Louvre. In 2010, after a problem occurred with one of the elevators, the roof – terrace was finally closed to the public.

There is an obvious play on the difference between opacity and transparency, between heaviness and lightness. The suspended structure shaped ” cloud “, visible in the opening arc architect confirms the presence of Paul Andreu.

The lightweight and largely irregular cloud is both innovative and efficient. It allows light and air to penetrate while protecting visitors from the sun or rain. Like a tent that is anchored not on earth but in heaven, the cloud has some relation to the German engineer designs Frei Otto.

This design consists of Teflon stretched sculpture supported by a framework of steel cables and rods articulated. You could say that is recognized Andreu by extreme lightness and elegance of the “cloud”, rather than their contribution to the completion of the heavy bow. No doubt his engineering expertise has been instrumental in the construction of this mega exceptional structure. Whatever the faults of the whole, will always be one of the enduring symbols of Paris. 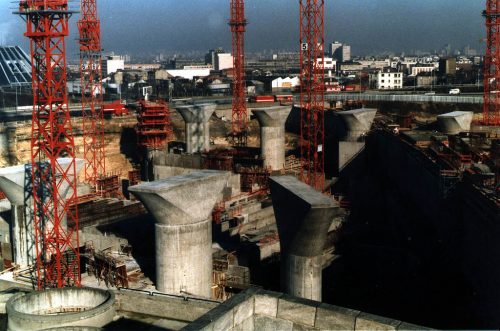 The Grande Arche has a prestressed concrete structure covered with glass and Carrara marble.

Were used in its construction 350,000 marble slabs of Carrara white and gray for coating, 300,000 tons of concrete, aluminum and glass. The exterior walls are covered with opaque glass panels 2800.

The building is conceived as an independent megastructure is almost a perfect cube, 108mm wide, 110mm high and 112mm deep. 300,000 tons of its twelve concrete pillars resting. Interspersed between the pillars and the mega – structure, placed a series of plates that absorb vibration neoprene and dimension changes.

The concrete beams are 70 meters support the roof of a hectare. Were placed at 110 meters high with pinpoint accuracy. The Grande Arche is slightly tilted (6.3°) with respect to the historical axis of Paris, so you can appreciate its cubic volume.