During the years 1971-1976 Pierre Koenig focused its expertise in taking forward the Chemehuevi Project for the redevelopment of reservation Indians during this period was the center of his teaching at USC, where with 21 juniors developed the project and because it almost did not accept other jobs. By disagreements between the developer and architect, he retired and the project was dropped. Even twenty years after Koenig said in an interview: “… the houses proposed were too cute.. Politicians did not want to Chemehuevi had better housing than theirs, therefore not made anything “……

1979 all in modular housing knowledge acquired by the architect for completion of the project were overturned Chemeheuvi in ​​performing the residence for marriage Burton. Although this was a unique residence, a sequence of four volumes was considered the best response to the needs of its customers.

The house for marriage and Ferrell Christy Burton was built on the coast of Malibu, California at 31371 Pacific Coast Highway, Pacific Highway, United States.

The idea of ​​Koenig was to make each volume in time, to thereby marriage could inhabit the first once completed, awaiting the second was finished and so on, until the construction of the four volumes ended, as it were allowing the economy to its customers.

In this construction also dominate the objectives of the Case Study House program, providing affordable to the American middle class homes, in this case replacing the steel timber, due to regulations and the proximity of the sea. 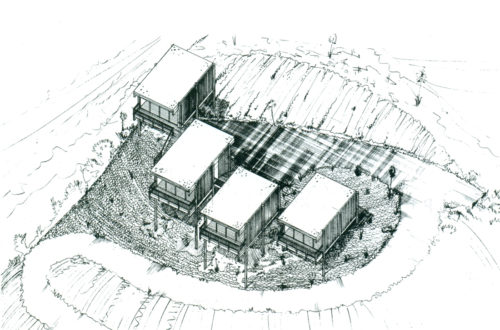 Aerial perspective of the whole

The four volumes are placed in steps and wooden posts, why housing is also known as “Casa Burton on wooden poles.” Thus, like they did in the House Iwata and the Case Study Hause nº22, Koenig avoided intervening landscape or carry out earthworks, as the buildings are above the slope.

Each of the four modules has an area of ​​55.75 square meters. In both modules ends the bedrooms are located, and the two central common and working spaces. These CPUs were first built.
The four buildings are in staggered line, leaving each at a different height, which causes the bridges and walkways that connect them must conform to different levels, creating an undulating sensation, even cabin in the trees.

The upper structure of each of the volumes are supported on H-shaped frames whose cross beams paired stretched between two parallel rows of studs. This structural form is made of wood, as the rules of the site and the nearby sea or advised not allow the use of steel.

The cross beams linearly connected by beams singing, stretched along each building on the level of the eaves. As in the Chemehuevi project, each module was unidirectional, but were connected laterally by bridges or gateways. The side walls lacked openings and balconies open end is oriented to the ocean.

Between the goalposts and under the habitable floor metal braces placed diagonally to provide the solid wood structure to seismic or prevent deformation of the construction forces. In this structural steelwork dynamic is offset by welds beams.