The residence built by Pierre Koenig for the marriage of Richard and Vicky Iwata and five children seems, at first glance, differ from transparent constructions of steel in the 60s had become the hallmark of the architect. This split seems to show that Koenig did not feel tied to any particular style, but developed different solutions according to the needs and tastes of their customers.

Iwata House was built at the foot of the San Gabriel Mountains, within Monterey Park, California, United States. The plot, located at 912 Summit Place, is wedge-shaped, narrows at the access road to be widened at the opposite end where it marks a steep slope. 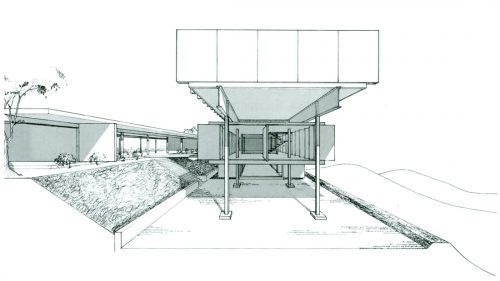 The House Iwata was conceived as a series of stacked rectangular shapes, which screens on the walls open to views of the mountains.
The steep slope and size of the plot made Koenig raised two options: either make a long narrow building on the strip without adjoining street or build on the broad side and slope gradient. The architect opted for the latter solution, used the slope to develop their project both in section and in plan.

As was customary in the architect, and as it did in the Burton House or CSH nº22, building on columns avoided modify the natural look of the terrain and earthworks, respecting the natural landscape.

When the paragraph building the access road on the slope, the flat part of the plot was used to locate the entrance, pool and parking. A total of 1,115 square meters were built, including parking and pool area.

From the street, through a long narrow path that flanks the pool entrance area, which develops sequentially, on whose side the locker room and garage were located is crossed, it separated by a partition area water. Once through the pavilion comes a stylized bridge leading to the house and ends at the central stairs. 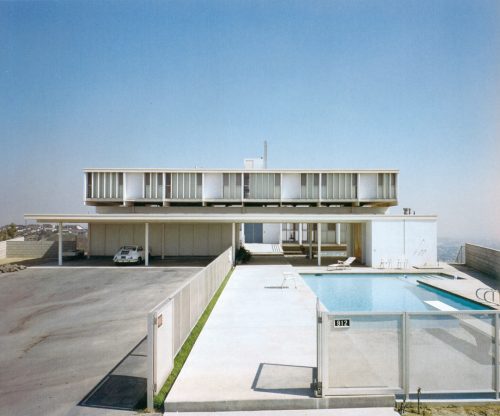 After crossing the bridge access, you reach the average level of the house where common areas are deployed. In this plant, 26×6 meters, are located to the right of the staircase, lounge, music room and a study, left the dining room, the kitchen and the living room. Throughout the entire outer wall were added fixed vertical screens that protect the house from sunlight while hiding the cross-sectional views of the landscape. In the center of both sides stairs lead to the upper or lower level floor.

At this level there is a large playroom for children and a workshop.

This level is the bedroom, six in total. The primary, on one end occupies the entire width of the plant as the library, located at the other end, which has attached a radio room. On the ground there are three bathrooms, a study and a sewing room.

Each plant exudes a more flexible hierarchical level in the common ground and more cellular spaces upstairs for the bedrooms. This same feeling is appreciated abroad, especially in the repetition of the screens, more spaced on the middle floor and in greater numbers at the top level, giving more privacy to the environments and making it more
each recognizable plant function.

Upstairs the large number of screens can not distinguish a bedroom of another, although certain blind panels let intuit the various functions. 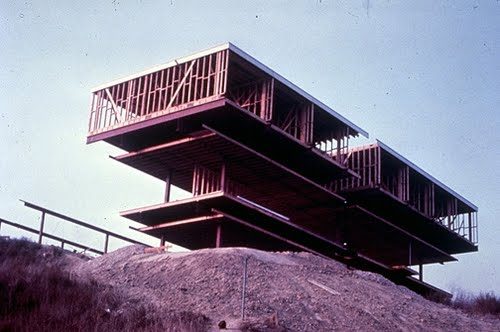 The main structural steel frame beams are placed in parallel in the longitudinal part of the plant. Located 4.30 meters from each other, each beam is supported by three pillars of 200×200 mm square section, enter yes 10.50 meters apart.

The top floor which needed further cantilever beams supported by I-section of 685 mm, the middle floor beams I-section of 530 mm and the lower floor rests on the ground.

The spaces between the plants were utilized to place the different facilities services while serving as acoustic separation.

The rear elevation of the upper floor is divided into eight equal bays, six for bedrooms, and the other for the library and an adjoining patio stairwell. The whole plant radiates a compact and almost institutional organization, Koenig considered practical for such a large family.

At one end of the building the library to which the radio room attached and the other the master bedroom with bathroom across the whole width of the plant. Both ends are joined by a central corridor off center that will give access to the different rooms of the plant, almost identical to each other and shallower than the ends, facing three bathrooms, a sewing room and a study.

The screens are the characteristic detail Iwata House. To determine your location, Koenig conducted the study in a model with heliodon allowing locate the position of the sun and its incidence at any time of day and year. As a result he placed screens on more and more together in the bedroom area, where stays were shorter, preventing excessive sun exposure and suggesting a relative privacy. On the ground floor, with more spacious rooms are more spaced apart. Thus sun exposure was proportional to spaces warmed.