The project of Antoni Gaudi i Cornet in 1904, was strongly questioned by the municipal authorities of the time, due to a number of elements in the design of Gaudí that far exceeded the limits of the bylaws. What at first was a simple amendment to an existing building, Gaudi gave the opportunity to create one of his most poetic and decorative works. 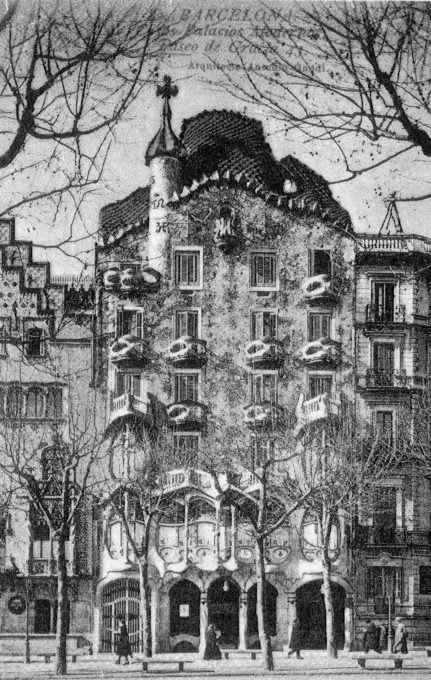 The house is located at number 43 Paseo de Gracia Barcelona, Catalunya, Spain, on the island of houses known as the “apple of discord” to have buildings of different architectural styles.

With the approval of the Cerda Plan in 1860, the Paseo de Gracia, formerly the road that connected Ciutat Bella Villa de Gracia, is emerging as the main axis of the new urban plan of the Eixample and place chosen by the leading families of high society to build their homes. Into the twenty-first century the southern sidewalk of the avenue, between the streets Consell de Cent and Arago has emerged as a sample of projects carried out in the early twentieth century by prominent architects, including Amatller House of Puig i Cadafalch, the Casa Lleó Morera de Lluís Domènech i Montaner, the Sagnier House of Mulleras Enrique, the Bonet House of Marcel·lià Coquillat and the Batllo House of Gaudi.

The organic forms that Gaudí used in the restoration of the Casa Batllo gather around a symbolic universe of marine inspiration that transports the beholder to a dream world of enchanted and fantastic landscapes.

Continues to draw attention, as with most projects of the Catalan architect, architectural elements using precursors of the vanguards of the late twentieth century, both the concepts and the methodology used, achieving great functionality in their spaces without losing any of its artistic value. The Casa Batllo is a masterpiece of form, color and light that with its modern idea of ​​Gaudí ventilation anticipates the thesis of rationalism, which come 30 years later.

Changes made ​​by Gaudí in the old building, were radical and modified completely. In fact, it is a new building. The main floor had to be the home of Mr. Batlló and his family, and the other four floors would be divided into two floors each for rent.
Gaudí carried out a comprehensive reform. On the façade he added a gallery, new balconies and polychrome ceramics. Inside he reorganized the spaces and unified the existing ladder to get more light and ventilation patio. He completed his intervention by adding two floors, finished with a spectacular ceramic crown.

Casa Batllo, like the Crypt in Colonia Guell, the Park Güell, Milà House, the Calvet House and the restoration of the Cathedral of Palma de Mallorca, belongs to the naturalistic stage, during which the architect perfected his style staff, inspired by the organic forms of nature, for which implemented a series of new originated structural solutions in the deep analyzes carried out by Gaudí of regulated geometry.

The undulating facade covered with mosaic of splendid colors is probably the most evocative, creative and original town. The main entrance is located to the left of the building and right access to the garages.

The balconies appear fragments of skulls with the openings of the eyes and nose. The slabs of the balconies were replaced with curved floor and above the famous railings which have originated so many interpretations were placed. All balconies, with the exception of the one in the loft one double or below the tower with the cross, are the same size.
The columns of the gallery on the first floor resemble human bones. This built on the main floor of the building, and flying a few meters above the sidewalk gallery has large oval windows in the center of the stone pillars in the shape of bones and “masks” on balconies, repeated figure shows the following plants. The large oval windows appear back again at the ends of the plant that is above the main floor and part of the grandstand. 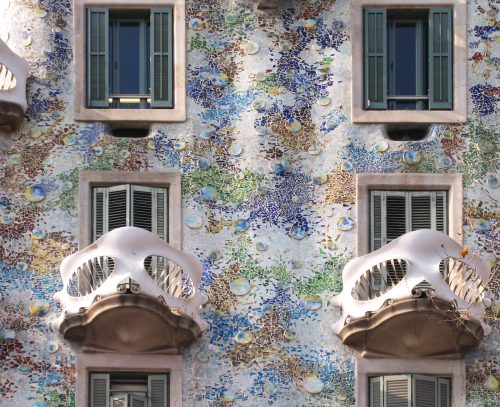 The surface of the facade, ornamental detail in conjunction with the “masks” of its 7 balconies, the balcony and the loft-shaped flower and give the dreamlike side of the building was done with “trencadís glass” (glass crushed) and ceramic colors placed on a lime mortar on them and 330 ceramic discs with different colors and sizes 15, 21, 27 and 35 cm spread. On the tribune of the main floor shows 4 terraces with stone balustrades.
The balcony loft shaped flower. It is in the top of the building where some elements that break the symmetry of the facade, first recess in the ceiling of ceramics, a terrace and a tower topped with a cross in shades of ivory and covered with pieces of glass come and with monograms of Jesus, Mary and Joseph.

The rear facade of the building overlooking the courtyard of the apartment block and only the Batlló enjoy the typical court of this type of construction. The other floors have balconies that overlook this courtyard.

This facade, like the front, show organic undulating and is coated with crushed glass and ceramic colors.
The balconies of the upper floors have metal railings and windows with wooden frames are made up of combinations of rectangular shapes.
An artistic combination of ceramic color forming geometric and floral motifs appear again in the top loft. 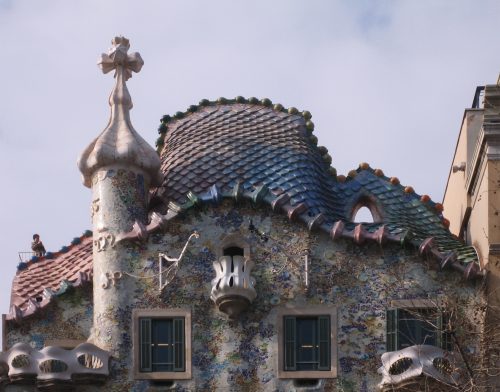 The roof that crowns the residence is one of the most characteristic of Gaudí for urban buildings, culminating in a wave shape that recalls the arched back of a dragon; It is covered with ceramic tiles that look like scales.
This original roof houses inside a large loft in line Bellesguard. All these lofts are built with brick, arranged in the form of arches with a lift.
On one side of the roof stands a tower with the typical cross of four arms of Gaudí, pointing to the four cardinal points.

The interior is also very imaginative and has very varied decorative items like furniture, decorated windows, wrought iron, homes, etc.
Gaudí devoted particular attention to the first floor, the main floor that occupy the Batllo family, with a special provision of the roofs, decorated with original shapes and authentic pieces of very careful design.

The restoration by Gaudí added a fifth floor of the residence, which at the time was intended for service personnel, extended the basement where the storage and the bunkers were located, the ground floor was dedicated to garages at street level, restructured the main floor, he expanded the central courtyard lights, remade both main and back facades built a new roof.
The work, with an area of ​​4300m2, 32m high and 14.5m wide, consisting of basement, ground floor, main courtyard, four full floors, attic and roof, private access to the noble or main floor and a staircase neighbors running through a widened inner courtyard, as the elevator.

Access to the lobby of the building, which is done by the door located to the left of the facade shows two routes, direct to the main house either towards the stairs surrounding the lift shaft continues to the upper floors, through the patio lights and giving access to other apartments made for rent, two floor and attic for services. The elevator is surrounded by the stairs in the center of a courtyard illuminated by the light coming through the glass skylight. 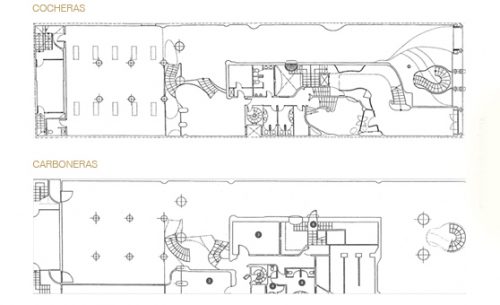 From Paseo de Gracia you have direct access to the garages that are at street level and that once inside descend underground portion occupying a patio on the main floor. From the garages, which were later used as a warehouse, it was accessible to the coal and basement storage.

The main floor, home of the Batlló family, was the main building with over 700m2 of surface and a large patio in the back. Its access is through an imposing lobby evokes the sea caves of Captain Nemo, corrugated walls and a spectacular staircase with railings of hand-carved wood representing the backbone of a large animal. The landing is lit by two windows placed on the roof and has a large ceramic fireplace built into the wall. 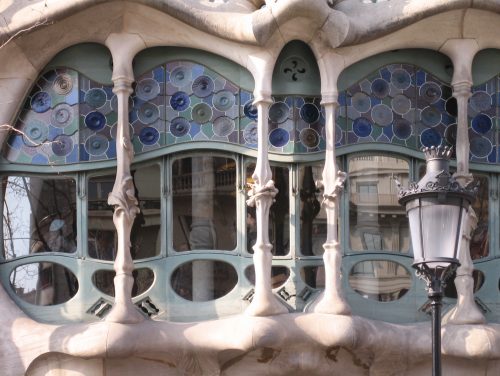 On the Paseo de Gracia the office of Mr. Batllo and then the great hall is located overlooking Paseo de Gracia through whose windows features light penetrates. This large room is divided into three spaces through large oak doors and stained glass to continue the sinuous shapes of the entire residence and if open allow create a stunning single space. Windows with wooden frames, are raised and lowered by counterweights, with the particularity that no jambs and stiles, so making it possible to lift all the windows and have an opening run, panoramic, across the width lounge. The main dining room is located on the back of the floor, overlooking the landscaped courtyard in the center of the block.
The ceilings of the house continue with organic forms that evoke the undulating movement of the sea, including a striking swirl made with esparto.

One of the key points in the restoration work at Casa Batllo corresponds to the widening of the inner courtyard in the center of the elevator cabin whose wood was placed in operation has continued through the years. Covered with a large central skylight whose windows are smaller at the top, where light penetrates, are enlarged as it descends.
The whole yard is covered with ceramic embossed on, more intense at the top and lighter at the bottom blues, achieving a uniform distribution of light.

The mansard roof that crowns the building hides one of the spaces designed to offer, plus an exquisite aesthetic, great functionality. Its double roof helps counteract the thermal differences and behind him the service areas for tenants, utility and storage rooms were located.

A spiral staircase leads to the terrace of 300m2 which highlights four sets of fireplaces, 27 in total, with sinuous, stylized and polychromatic forms, which were also designed to detail the air expelled not turn inward. From the terrace excellent views of Barcelona can be seen.

The spaces made in the attic of the building stand out for the simplicity of its forms, open spaces and versatile functionality. In highlight a string of 60 catenary arches of Catalan brick forming a structure that evokes the back of an animal and used to support the roof, which on the outside was covered with scales ceramic, perhaps the Dragon Saint George, patron of Barcelona. From the main room loft structure ribs and sternum creating parabolic arches that support the terrace is appreciated.

The staircase that connects this space with the terrace is a robust iron spiral staircase. Gaudí wrought iron took advantage not only as an aesthetic and ornamental feature, but also as structural reinforcement.

In addition to the ornamental part, in this house Gaudí works some concepts that allow their climate efficiency, as in the atrium of the windows have a lower wooden mechanism with a rotating system that allows open to maintain ventilation

For the facade, Gaudí modernist building elements typically used as ceramics, glass, stone and wrought iron with an extraordinary result.
The ornamental prodigy, both exterior and interior, Gaudí got to work with the best craftsmen of all trades, Germans Badia metal workers, carpenters Casas i Bardés, ceramist Sebastià Ribó and Tallers Pelegrí makers of stained glass (following Permanyer). 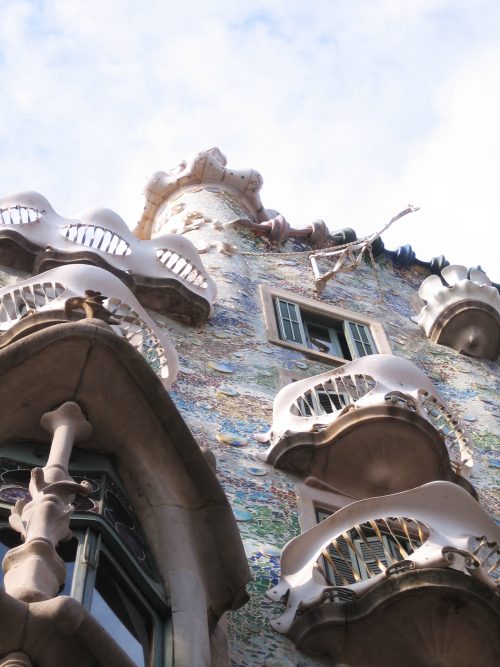