This magnificent building was built as the headquarters of the Corporation Dharmala, being considered one of the most successful projects of Paul Rudolph. It belongs to the late period of his career and summarizes much of the modernist sculptural designs and ideas that he developed through the years in many other exploratory scenarios.

It is located in Sudirman Jl.Jenderal 32, Sakti, Jakarta, the capital and most populous city of Indonesia, also its political and financial center. In an area of ​​650 km ² is concentrated a population of 8,489,910 people, amounting to 18.6 million in its metropolitan area.

The profound articulation of this statuesque tower with its repetitive rhythm, its cantilevered balconies and landscape, scale it down to get to the podium to be consistent with the urban context of low ceilings typical of the surrounding area. Rudolph planned this open atrium, surrounded by public spaces, as if it were “a people, with easy access and visual variety that all people possess.”

The context and sense of place, so important in the architecture of Rudolph, has been achieved in this project through the interaction of these spaces on the lower levels, where the occupants can walk and move inside the building. This environment is obtained from structural and functional requirements. All Dharmala tower is a convincing testimony of the work and time of Paul Rudolph, reaffirming the principles of design that evolved throughout his life.

The 26 levels of the tower, with its square plants that turn on themselves to acquire the cruciform shape, create alternate floors with balconies and terraces pipeline, including office space, which let in natural light and good ventilation, concepts where Rudolph played in most of his projects.

According to local building codes is not allowed the use of exposed concrete, so the tower is completely covered with bright white ceramic. The resulting shape was so surprising that Dharmala Corporation uses it as a symbol of the company.

On all windows were built sloping overhangs that protect from direct sunlight in the hot and humid climate of Jakarta, where shade and breezes are welcome.

“The traditional architecture of Indonesia offers a wide variety of solutions to the problems of a warm and humid climate. Unifying element of this rich diversity is the ceiling.” (Paul Rudolph)

In this context, Rudolph designed an architectural system that emulates the beauty of traditional roofs of this area of ​​Jakarta, incorporating deep eaves and overhangs with spandrels of 45 º. Two twin columns belonging to the structure and cross linking the ends of these projections, reaffirming the thought that Rudolph believed that adjacent columns create better proportions and give strength and direction of view, a principle that is clearly demonstrated in the facade of this building.

The visual balance of these columns, together with the horizontal spandrels creates a rich sculptural landscape that would have allowed a taller building, according to the original design.

In Dharmala, these twin columns are secured in cross bases, similar to the famous diagonal reinforcement Hong Kong & Shanghai Bank of Norman Foster.

At ground level, the entrance area with its many balconies and walkways open levels not only creates the feeling of space suitable for this type of building, also surrounds the atrium providing her with a cool air circulation and shade, balconies interlacing and gateways

The effect achieved Rudolph demonstrates the ability to create public spaces and nice shapely immersed in buildings above have a large office tower. This layered skirt not only set the main entrance and parking, it also has six floors of offices, shops, a bank and an exhibition area.

The curved perimeter, increasing in stages, like an inverted cone lets in natural light which is reflected in the light-colored finishes surrounding the central courtyard space. Groups of paired columns, on which rests the tower, rise majestically from the center of the courtyard.

Multiple levels of terraces and balconies, with their green boxes, jumps and water channels, fountains, together with the whole environment carefully studied and created the human scale of this elegant venue feature of late modernity.

The offices are designed in sets of three, alternating between two corners which are parallel and diagonally.
The tower looks like a sculpture that emerges from the top of the podium, twisting and turning up at the same place every three floors, until it reaches the top, a geometry that allows changing areas are created window balconies with planters.

Frank Lloyd Wright also twisted several plants in some of their designs, such as the Johnson Wax Building in Racine.

Its structure has been used reinforced concrete and steel.
Finishes throughout the building, columns, walls, railings and balconies, were made with white tiles. This finish not only protects the concrete against mold, due to wet weather in the area, being a common solution in Indonesia, also creates a sense of cool elegance, immaculate white, to while small scale tiles give a pleasant texture and this huge building. 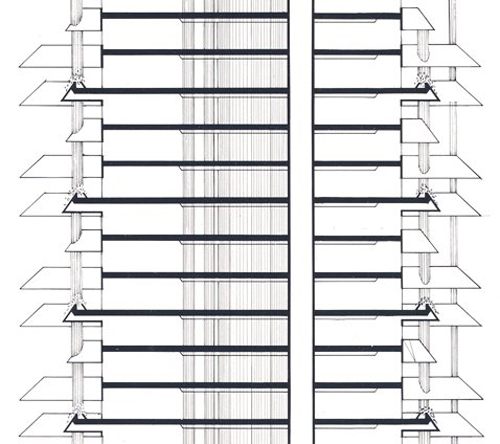 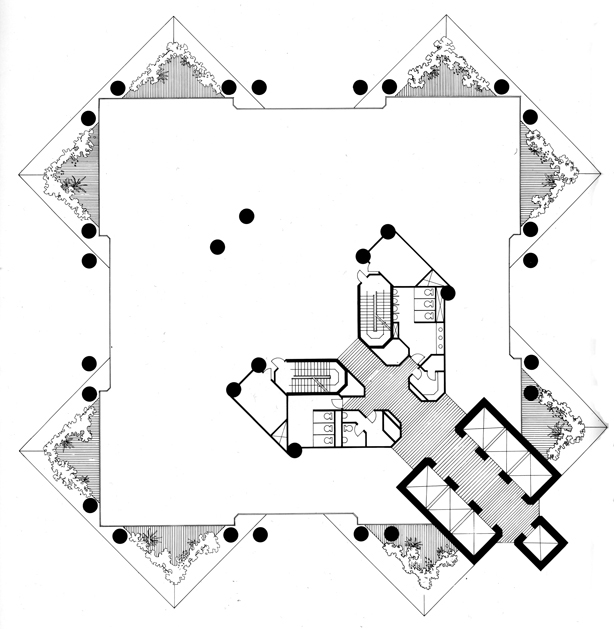 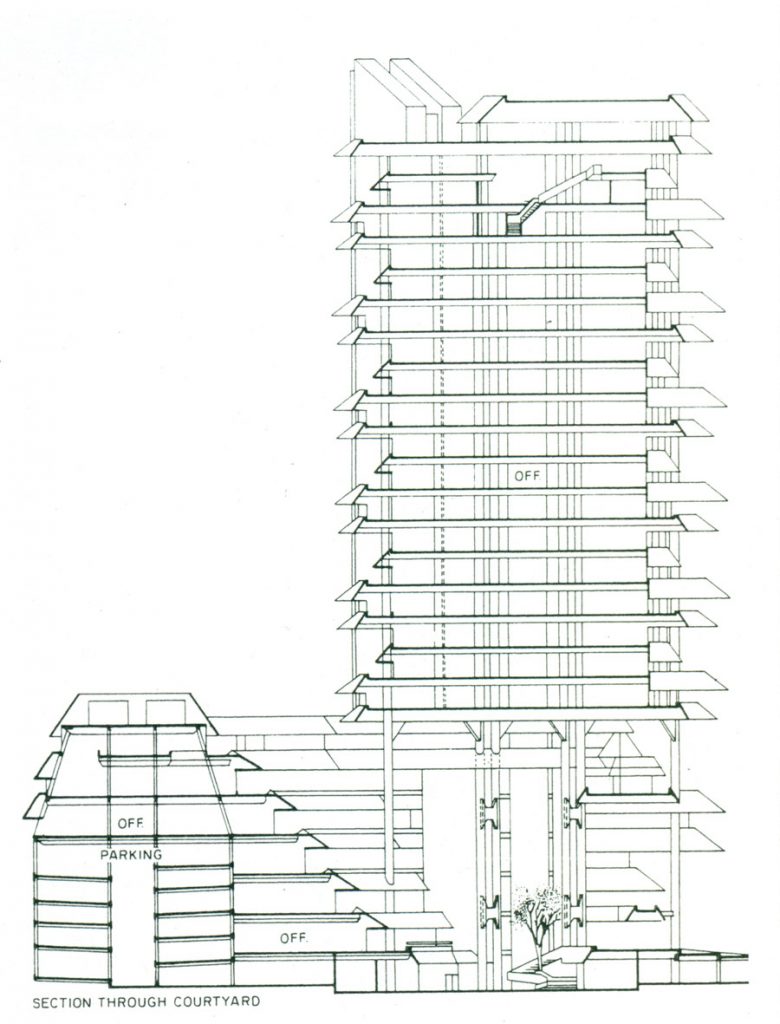 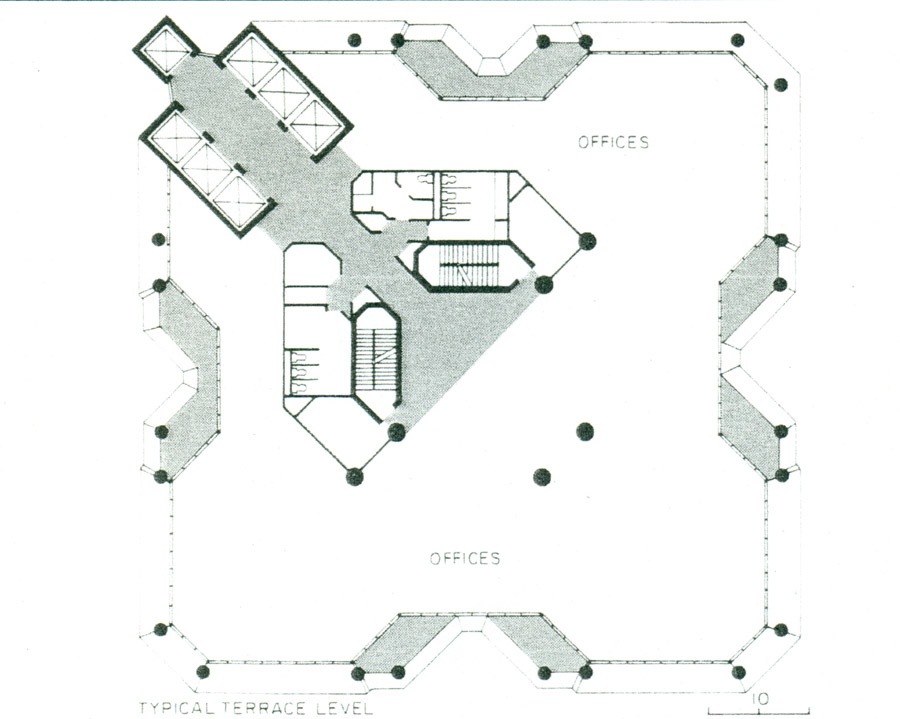 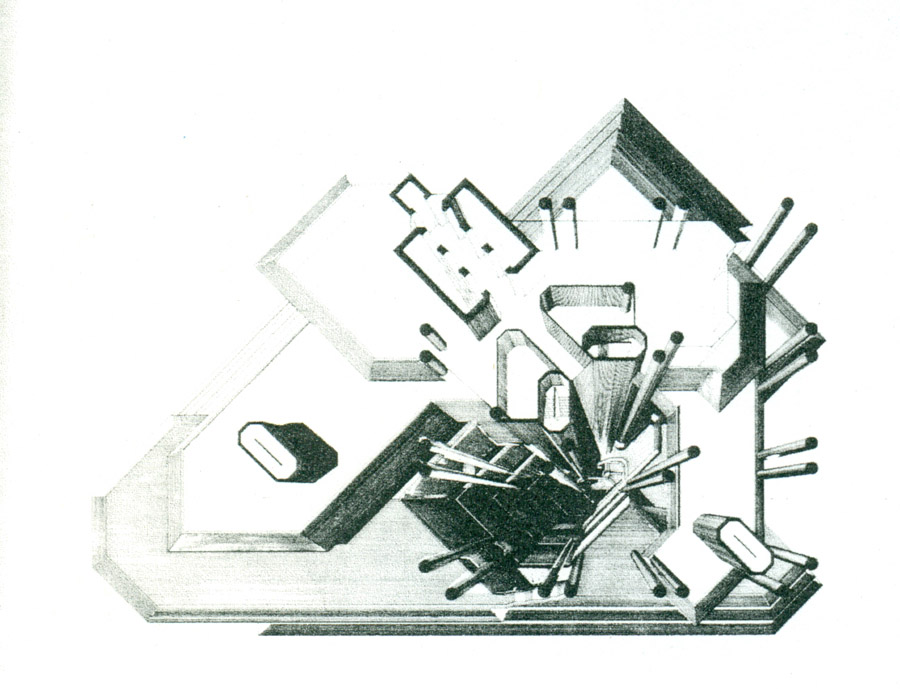 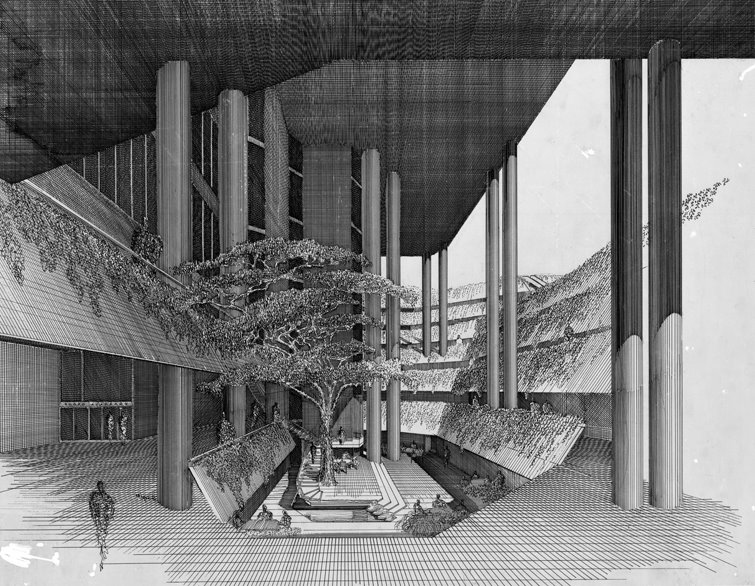 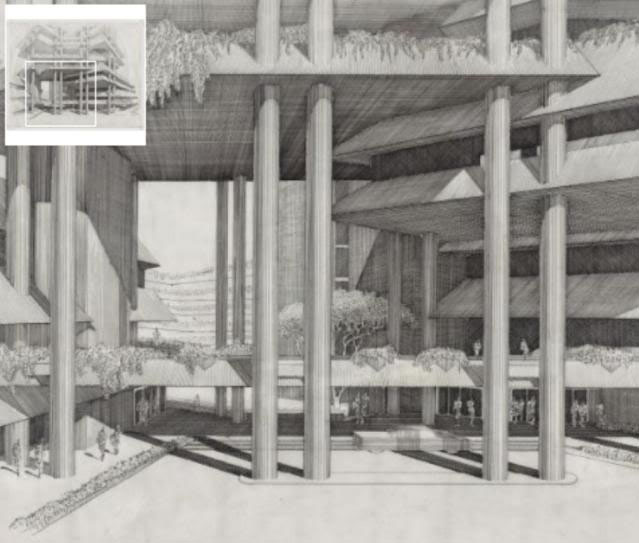 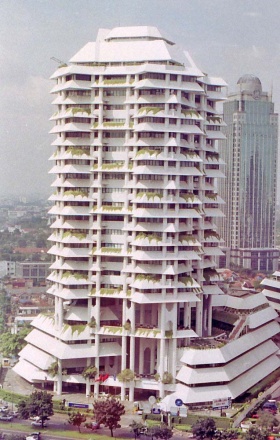 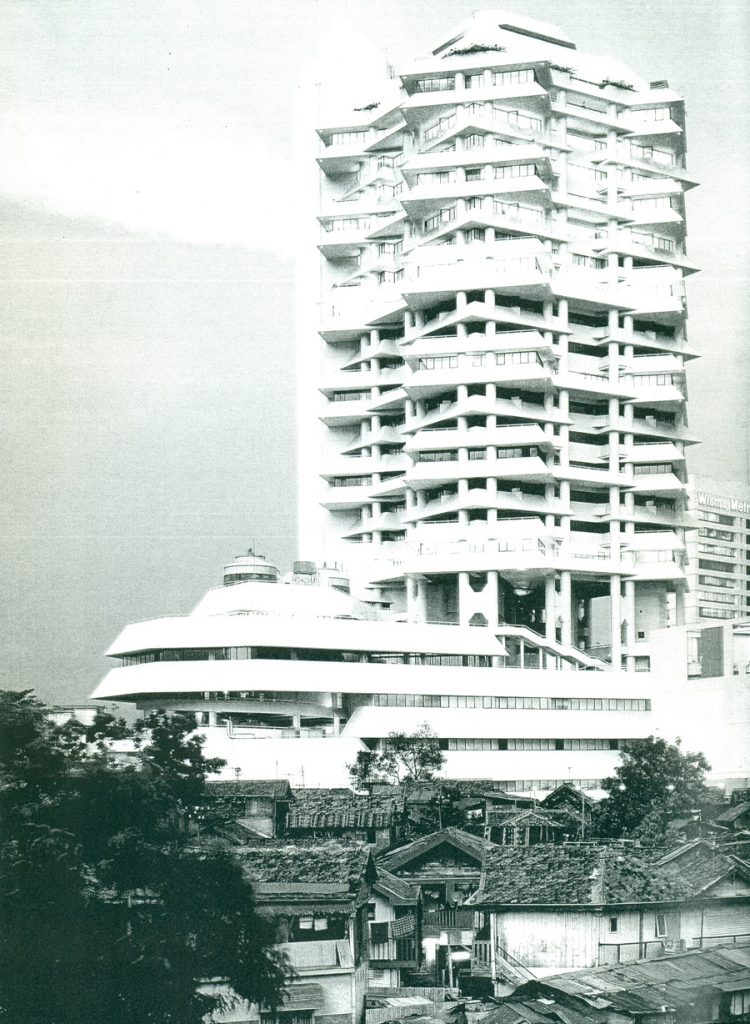 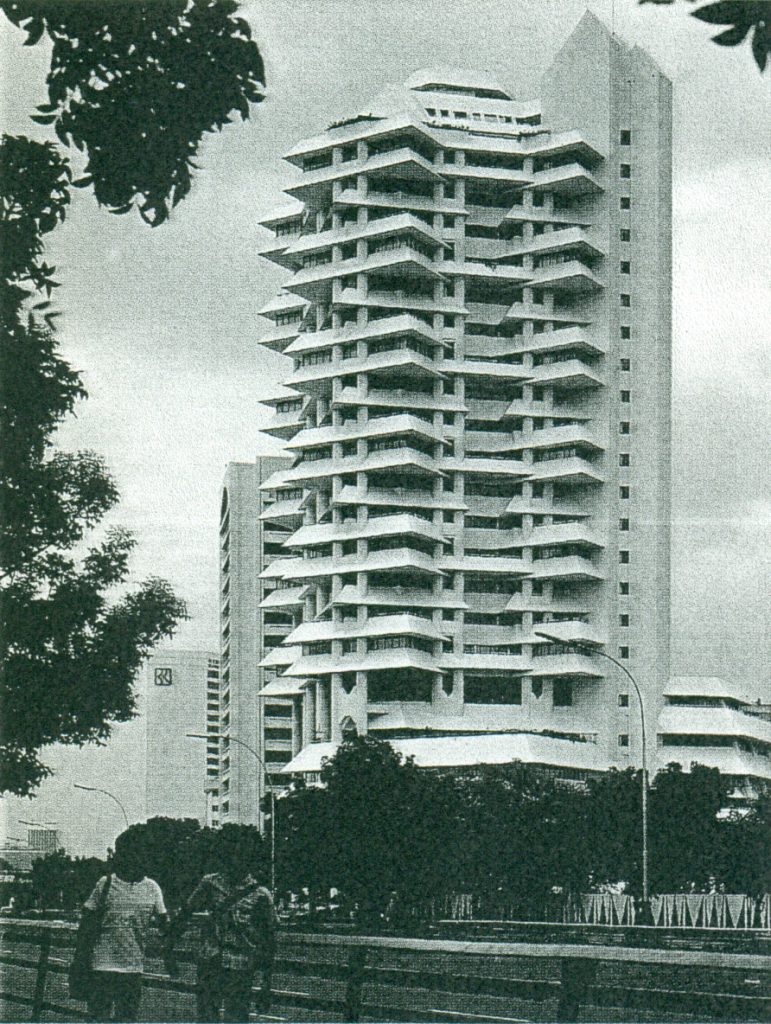 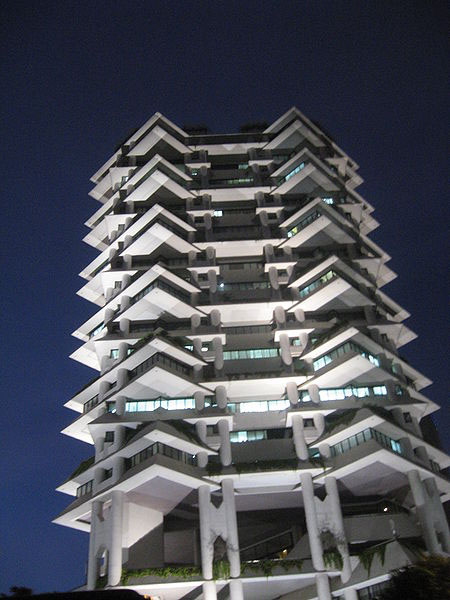 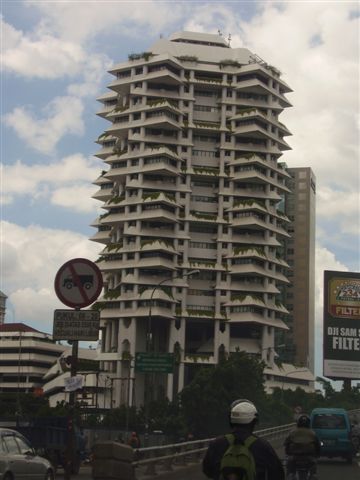 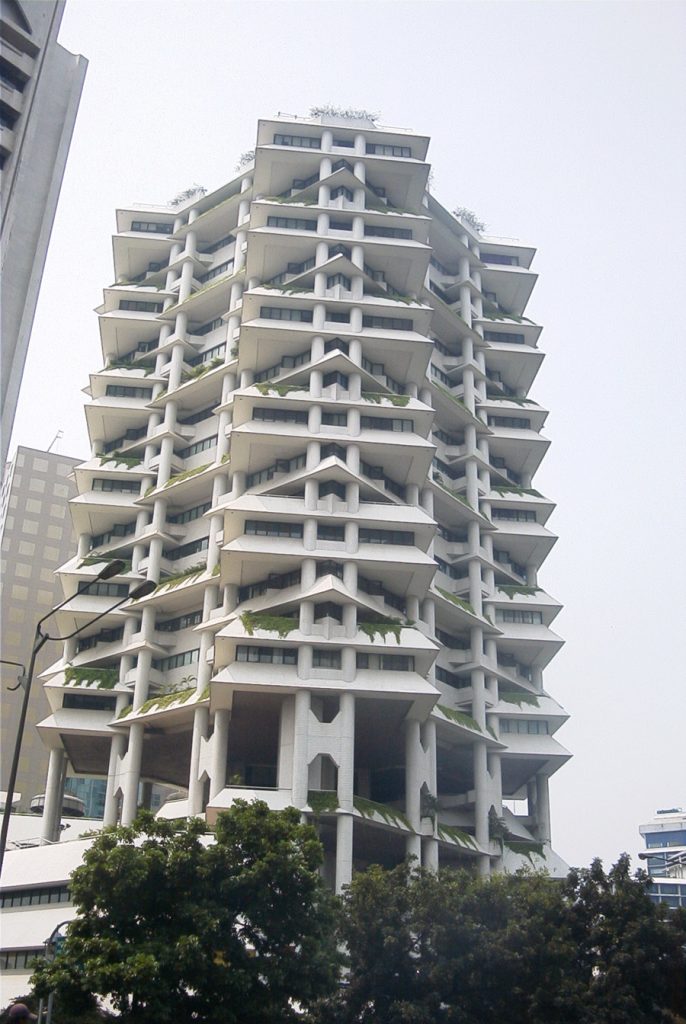 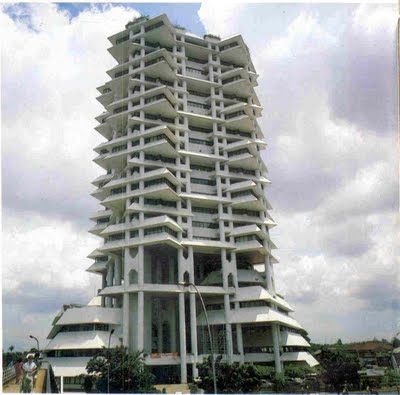 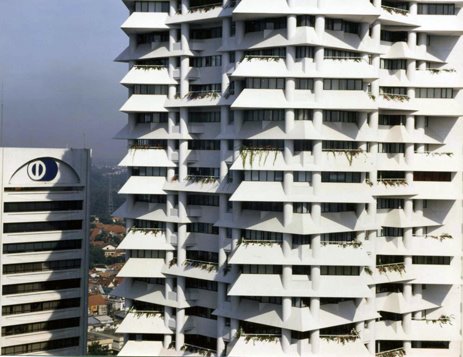 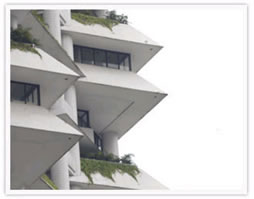 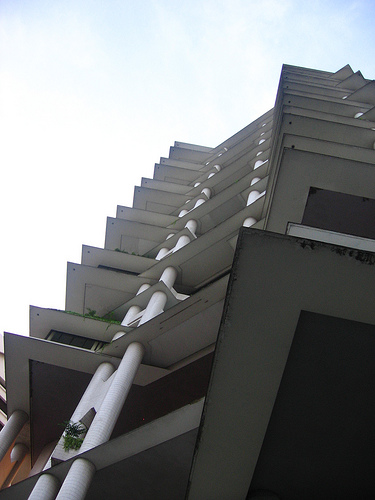 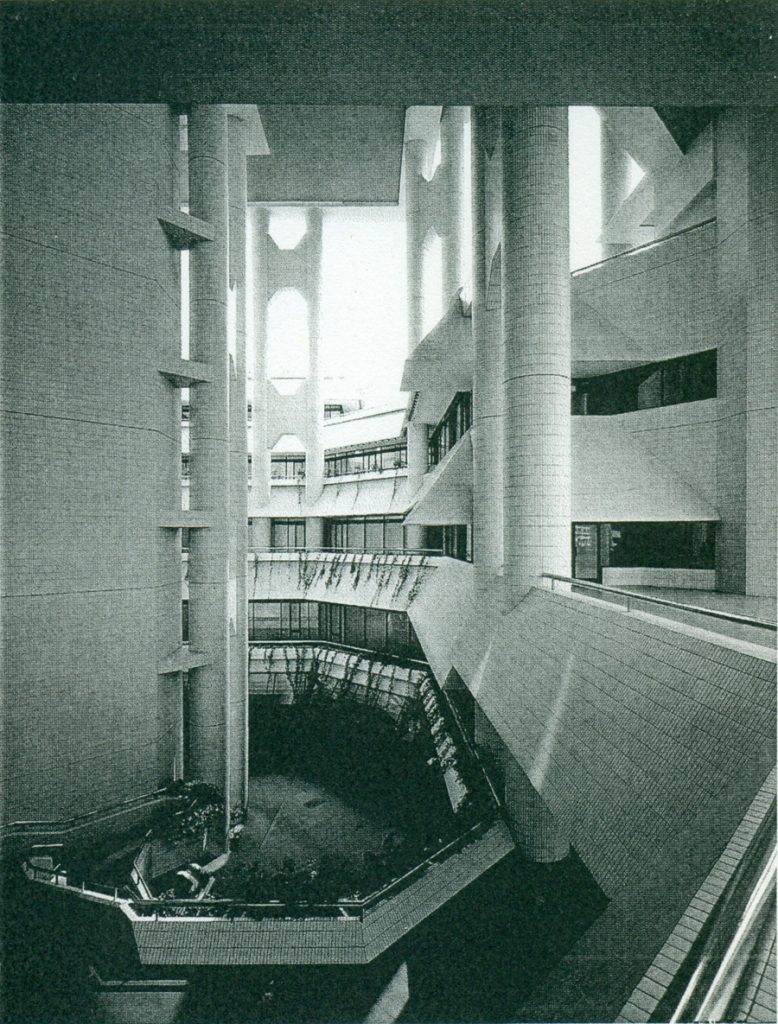 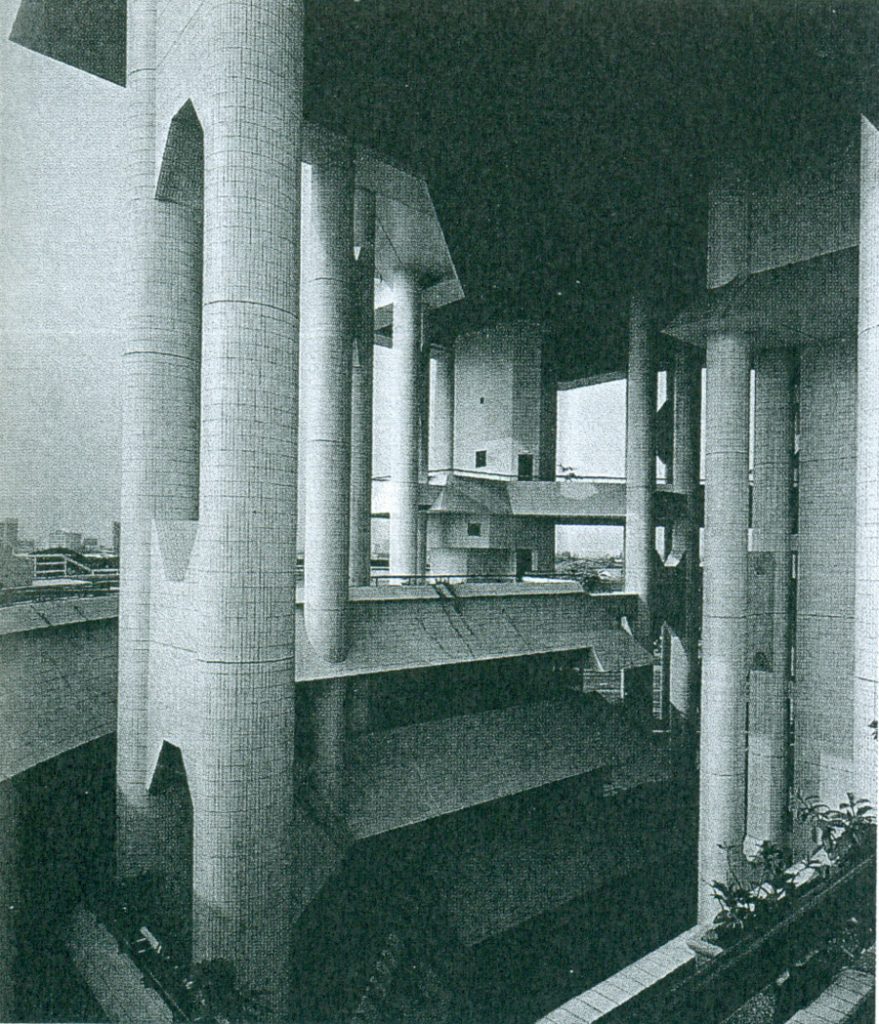 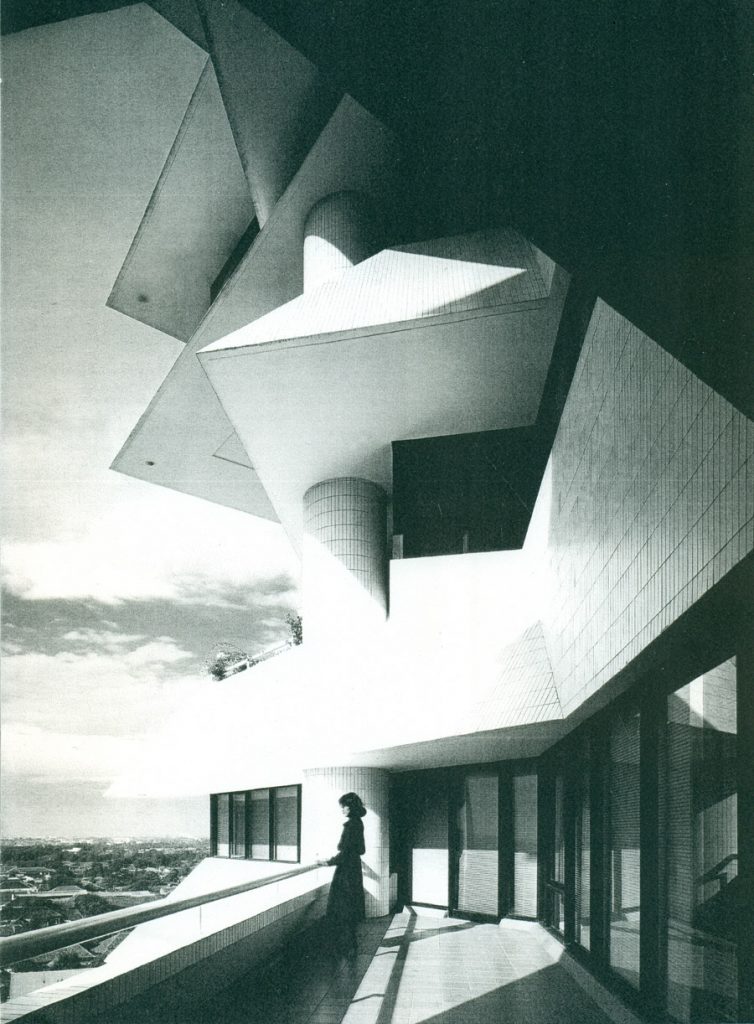