In the central district is the haughty Hong Kong & Shanghai Bank, a building of 41 storeys built in 1986 as a symbol of the capitalist economy in the Pacific, and one of the most expensive buildings of its time: more than 90 million euros. Both emphasized the transparency of its formal conception, hidden behind an appearance of high technology.

The tower is located in the heart of the financial district of Hong Kong.

Norman Foster’s work represents a particularly significant phenomenon within the overall picture of the architectural culture of the last third of the twentieth century.

In full decade of the 70s, when the rising tide of individual postmodernism tends to fall back on the history and ensimismamiento Mannerist in language, Foster, in a work as the Sainsbury Center, not only continued to pursue the development of contemporary architecture of the modern movement but emphasized desembozadamente one of its founding issues, such as the grace advances in technology and industry of our time. This attitude gave rise within the contemporary architectural thought into the so-called ¨ ¨ High Tech, of which Foster, along with Richard Rogers, clearly appears as a leader.

This building is an indication of this trend matures, in which the muscles ¨ ¨ technology of buildings always tends to increase with an expressionist.

The requirement to build more than one million square meters in a short time suggests a high degree of prefabrication, including the factory finished modules, while the need to simultaneously build up and down led to the adoption of a structure of the suspension, with pairs of steel masts organized into three bays. As a result, the building is divided in to raise the profile of the three towers, respectively twenty-nine, thirty-six and forty-four stories in height, creating plants of varying extent and depth to allow gardens and terraces. The mast of the structure can move forward, pushing the service to the nuclei of perimeter.

A unique system of movement through the building combines high-speed elevators to the reception with the spaces beyond the escalators. From the outset, the Bank attaches high priority to flexibility. Curiously, over the years, has been able to reconfigure office designs with ease, including the incorporation of a large room of distributors in a flat in a move that could not have anticipated when the building was designed.

Due to the urgency of completing the project, the building relied heavily in the off-site prefabrication; components are manufactured around the world. For example, the structural steel came from Britain, glass, aluminum siding and flooring came from the United States while the service modules has come from Japan.

The structure of this building is certainly unique in that instead of the floors stacked on top of each other, as we are accustomed, here there are a number of key plants “bearing” distributed along the building height and which hang other plants.

On the short sides of the building are situated the support that is responsible for forwarding all the building loads to the foundation.
On these 5 huge support beams rest spread over the total height of the building, each about 7 floors.
These beams have the song for the full height of a plant, and indeed within it is normally active when dealing joists by metal bars.
Des these large beams literally hanging plants that are below it, until you reach the next beam. 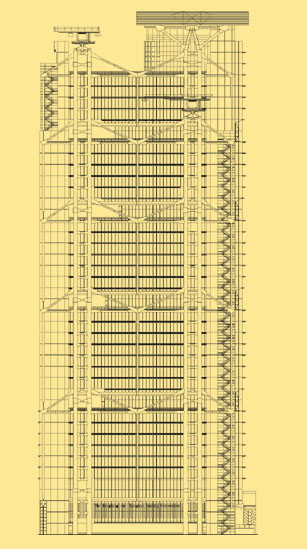 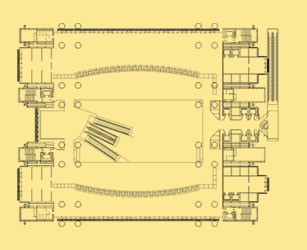 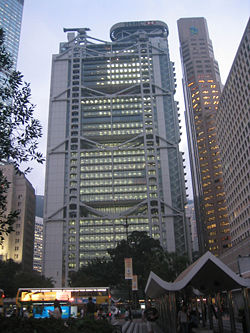 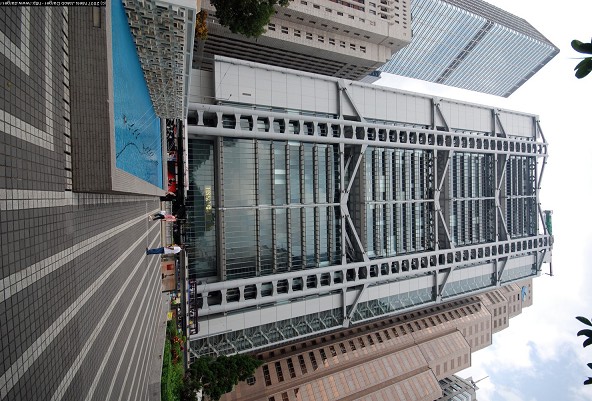 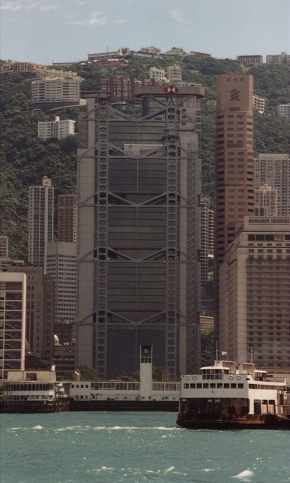 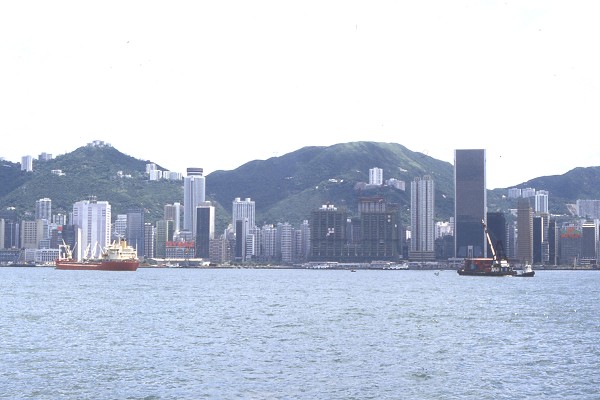 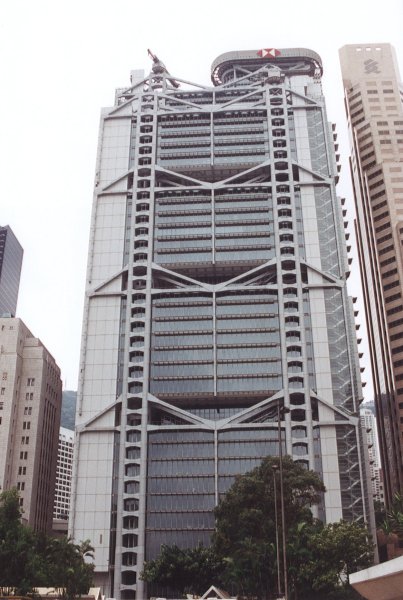 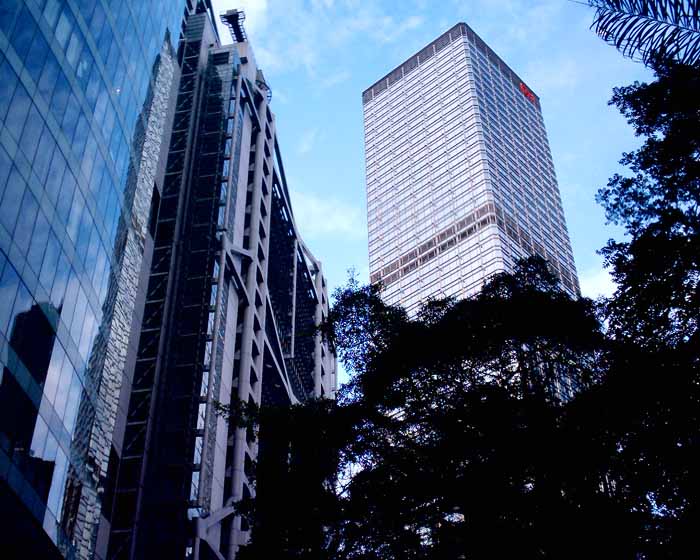 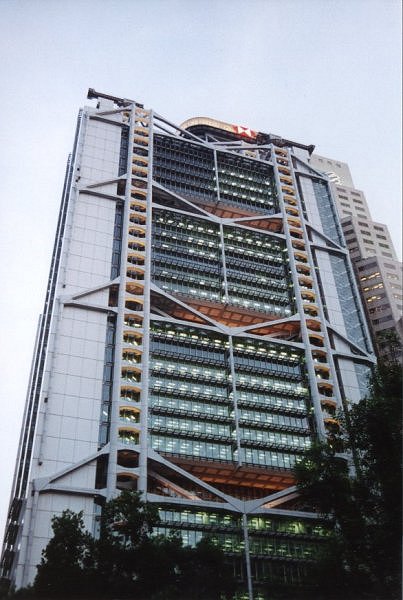 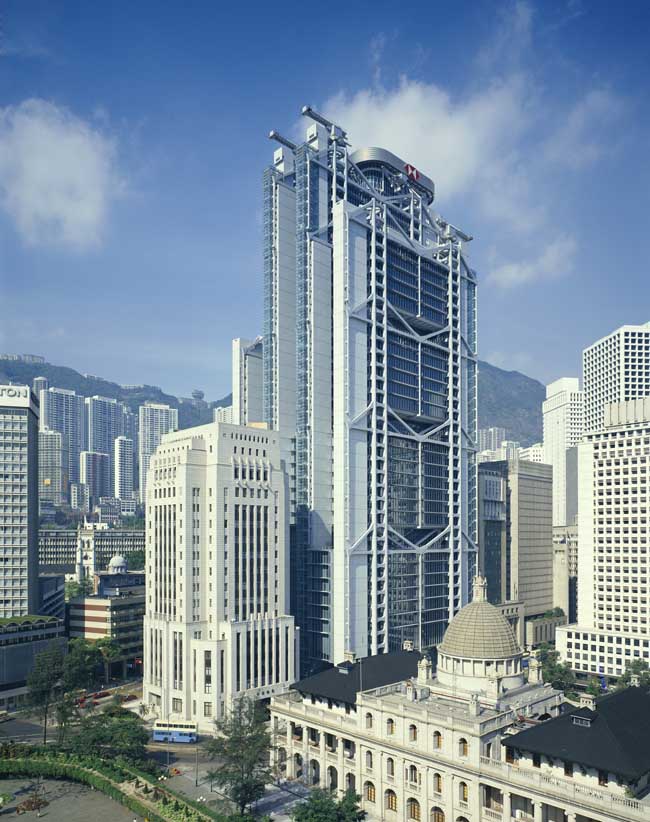 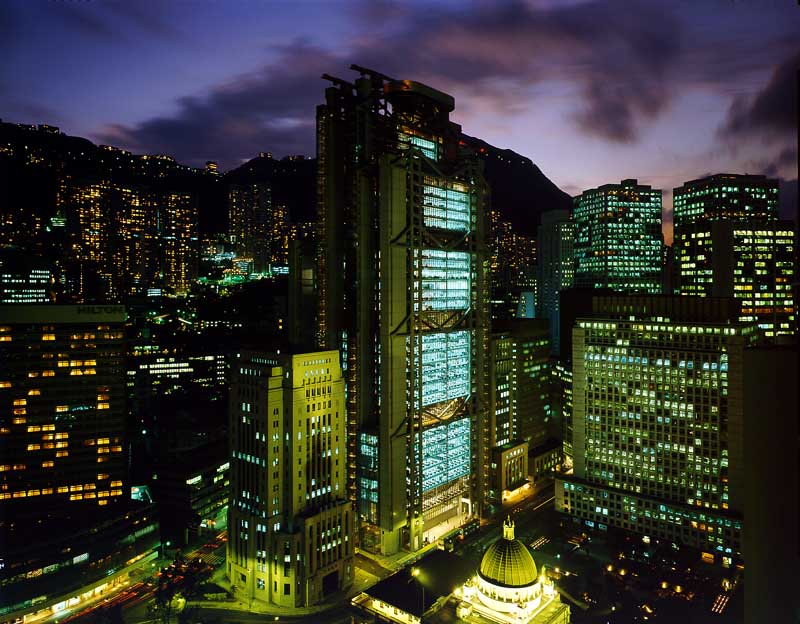 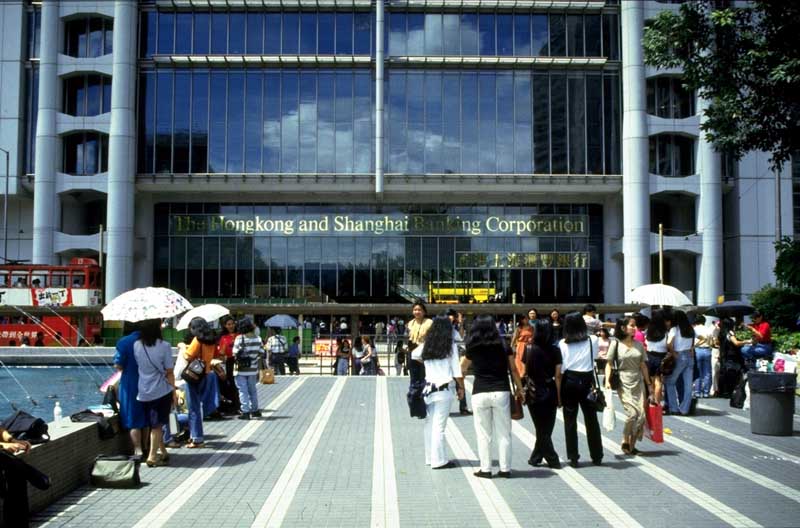 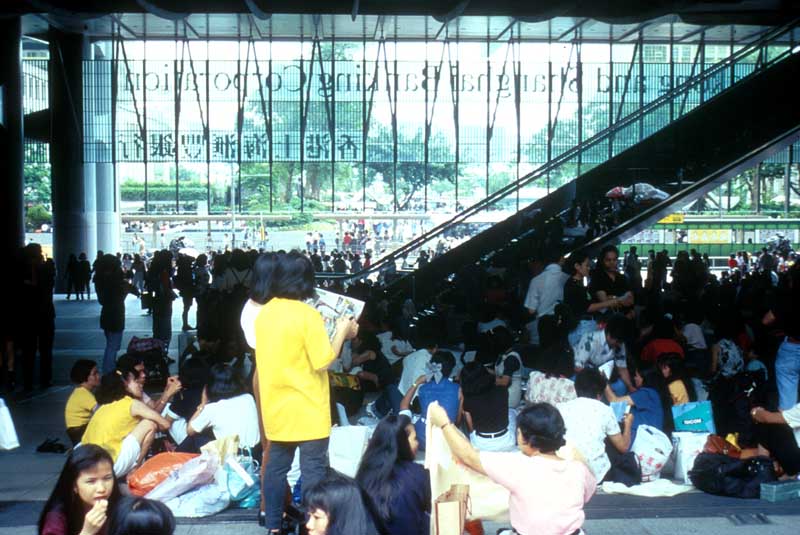 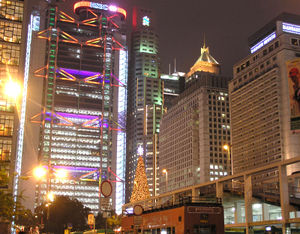 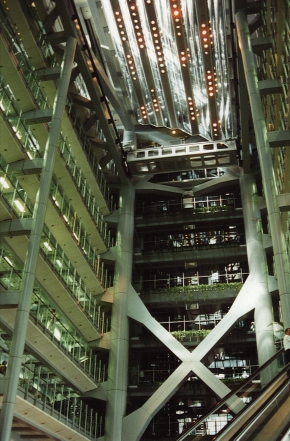 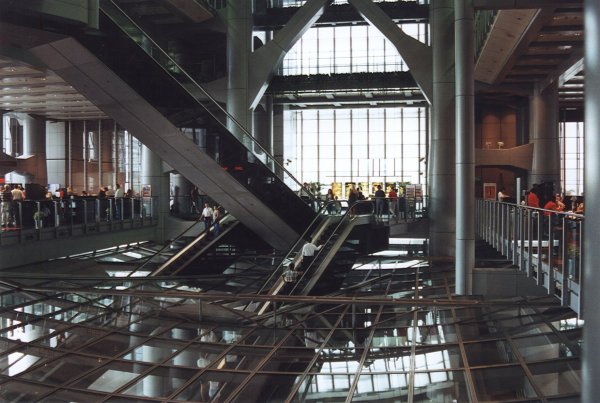 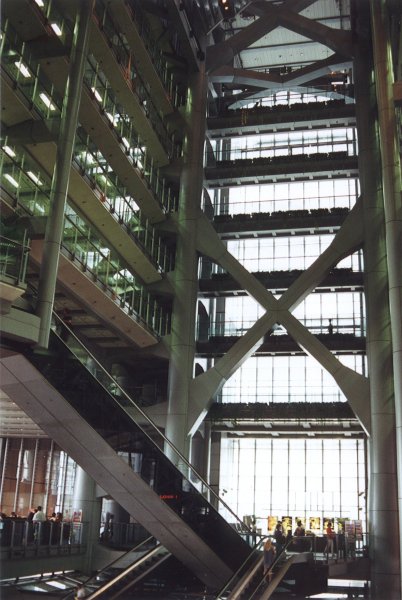 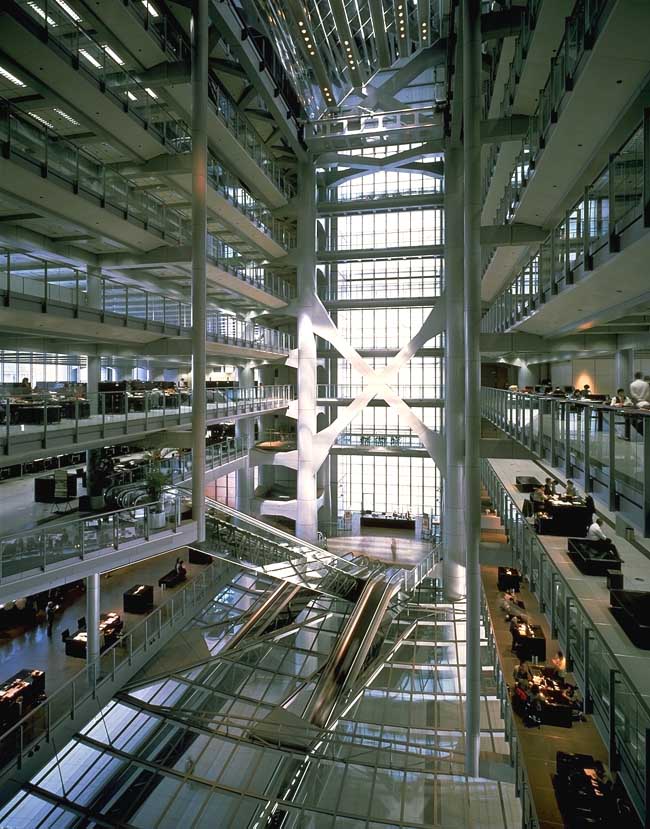 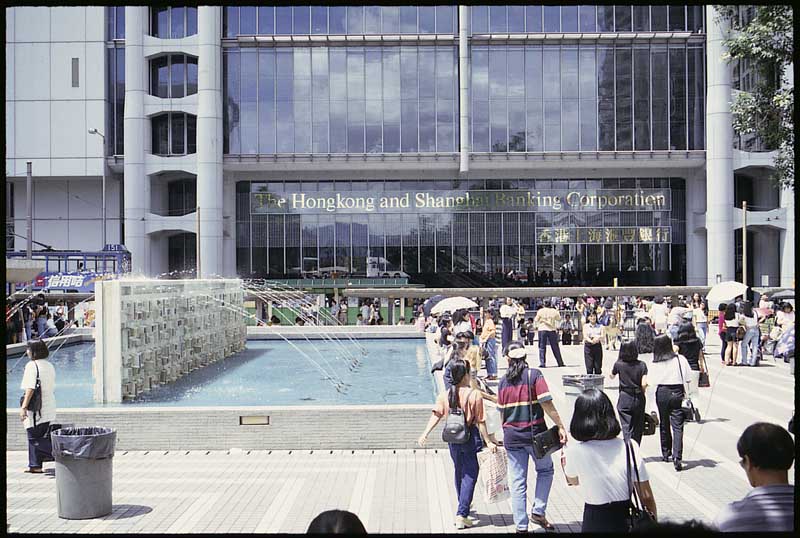