The house built in the early 1930s, by the architect Luigi Figini as his own home, today retains its uniqueness within the urban fabric. Perhaps due to its elementary simplicity, it represents the affirmation of a balanced combination of form and function. A kind of statement of the minimum vital and spiritual needs necessary for existence in a large city.

Located north of the historic center of Milan and near the railway ring this area of ​​the city was developed by a cooperative of small villas and independent houses, sold to professionals of certain categories, in this case journalists, hence the name of Villaggio dei Giornalisti , (Villa de Periodistas).

In this historical context, although much of the architecture does not differ at all from ideological conceptions and provincial-style exercises, the young Figini experiences the most advanced instances of European culture with the design of his home. A metaphor and substitute for what was then sought to live in the big city: sun, air, light and view of the landscape from the high floors of a large building. The village is an unconditional act of faith towards rationalism.

The house is located in the Villaggio dei Giornalisti neighborhood, within the La Maggiolina district, in the northeastern area on the outskirts of Milan, Italy. This district began to be built from the second decade of the 20th century as an integral part of the project of the Industrial District of Northern Milan.

The place is exclusively residential, with family houses or small residential complexes surrounded by greenery. The area, despite being surrounded by historically popular areas, is one of the most exclusive in the city.

In its design the principles of rationalist architecture and the 5 points of modern architecture, introduced by Le Corbusier, are evident. Its plants are inscribed in a gold rectangle, 18×5.5mts, a proportion that is respected throughout the construction. The gaps are linked to each other by simple harmonic relationships where a constant shape along the abscissa axis and another along the ordinate determine the dimensions

In this building the technical solutions, which Figini pointed out as “technical and practical notes” are incorporated into the aesthetics and inspiration that the architect sought to organize daily life within the space. The rectangular plan is oriented along the heliothermic axis of Le Corbusier , seeking the best aero-luminous relationship and guaranteeing the best lighting supply and temperature control in the hot summers of Milan.

The distinctive detail of the facades is the band of windows on the first floor, with green curtains. This opening is repeated in the upper part of the wall, in this case open in the masonry along the entire perimeter.

On the first floor a large row of windows opens to the east to take advantage of the morning light and on the shorter facade that faces north to avoid excess sun in summer. The south-facing facade is protected to avoid the strong summer sun rays and on the west facade the windows are divided into three smaller groups. Other measures taken in its construction was the “isothermal terrace” with natural ventilation and double floor with interspaces and the arrangement at different heights of the interior rooms to facilitate ventilation.

On this first floor there is a double height terrace with direct access to the dining room that the architect populated with vegetation that would protect the interior spaces from solar radiation. The kitchen, a service room, a pantry and a bathroom are also located on this floor.

On the upper floor, with a smaller area, the bedroom, a dressing room, a bathroom and a toilet are located. This plant has two terraces, one at each end. The terrace with access to the bedroom has a small pool and the one on the opposite side, whose slab retracts in relation to the lower floor, a solarium.

The villa is a perfect prism that embraces its large terraces. These are a kind of garden inside the house, but at the same time they make the house inside a garden, a perfect balance between form and function, like a diaphragm, which, through the openings, leaves the surrounding space free.

The structure is formed by a rectangular reinforced concrete bearing cage that stands on 12 isolated pillars of 4.34m in height, which refer to the architecture of Le Corbusier, and equidistant in the two directions, with perimeter walls in cantilever . Figini applies in this house the model of the houses in the Weissenhof in Stuttgart (1927) and that of the Villa Savoye in Poissy (1929).

On the west side and after the pillars there is a single section staircase that gives access to the first floor of the house.

Both the structural framework and the pillars were made with reinforced concrete.

The exterior facades were covered with plaster and white paint. In the interior terraces the walls were treated as rustic surface and originally tinted in green.

In the living area of the first floor a large piece of black marble separates the dining room from the living room. The floors are marble in ocher, pink and white tones.

The pool located on the upper terrace has marble floors. 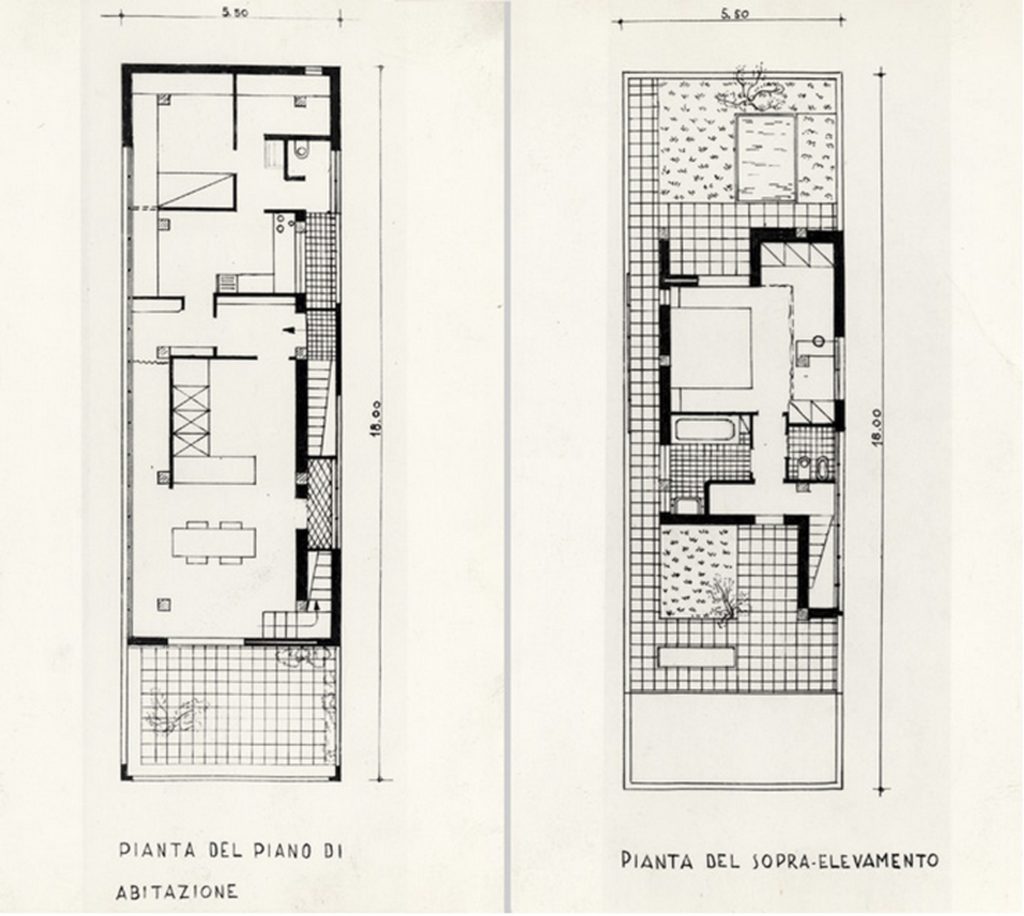 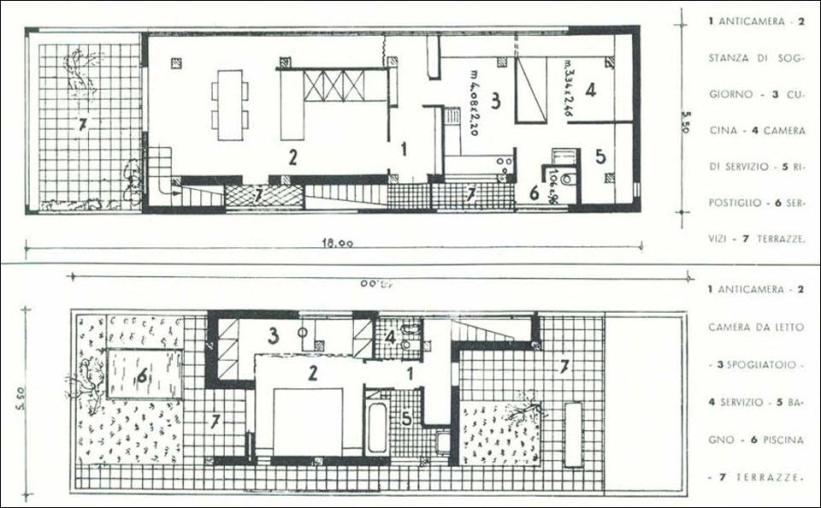 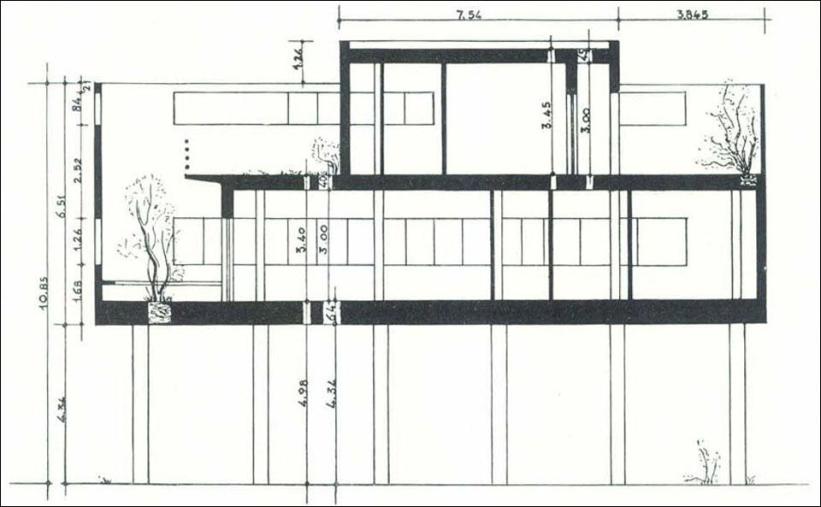 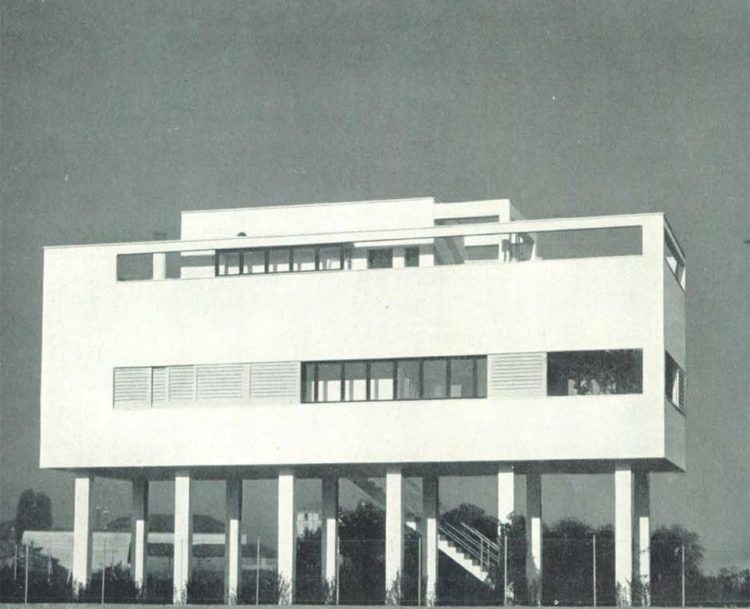 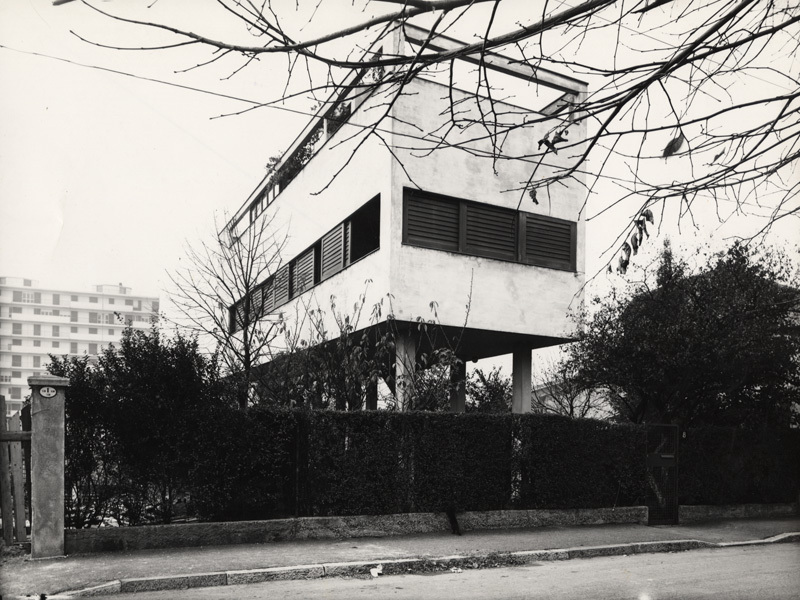 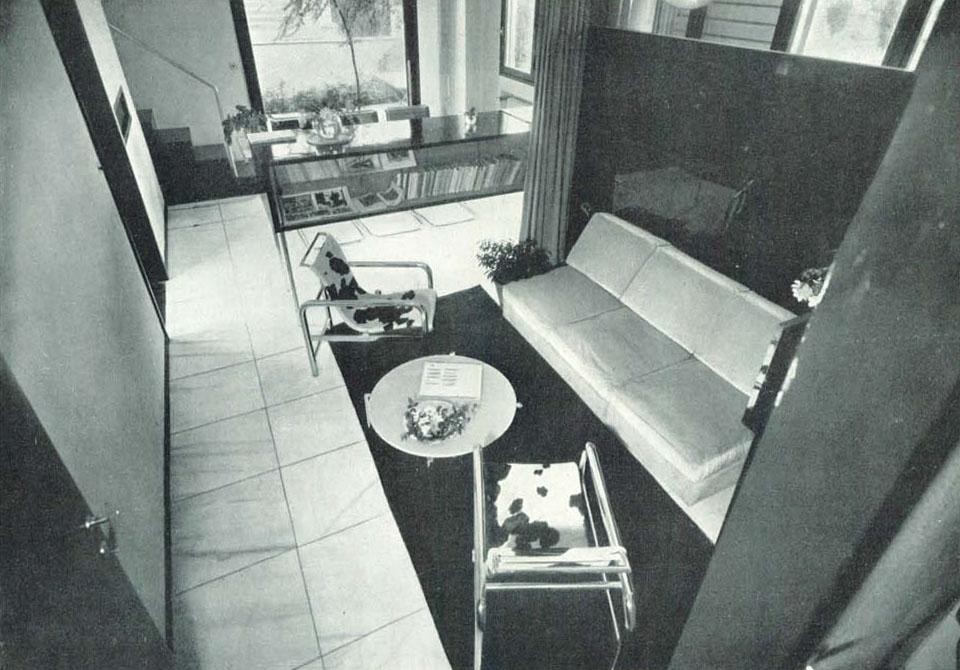 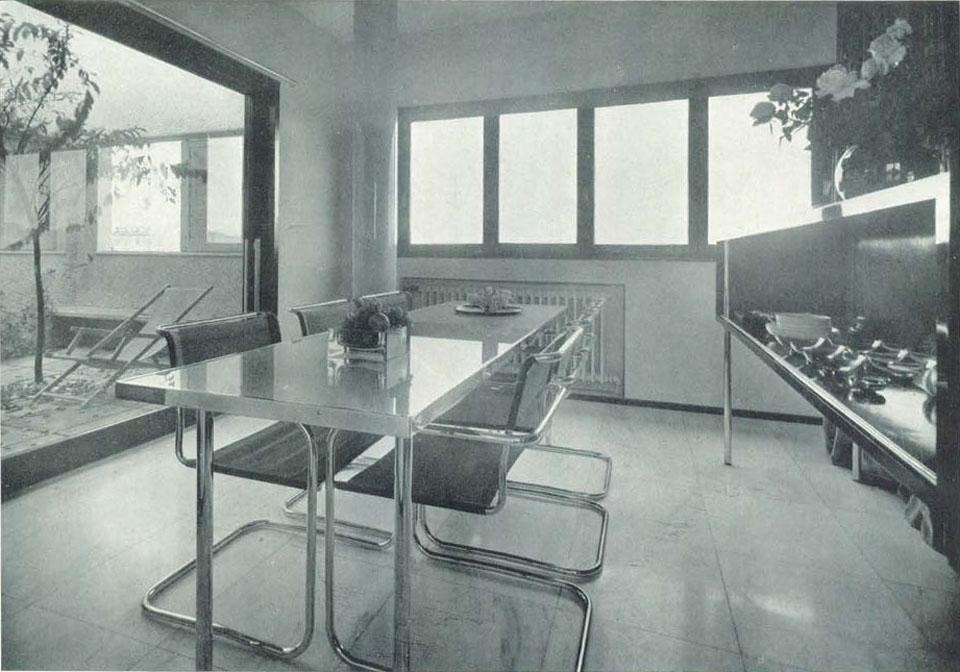 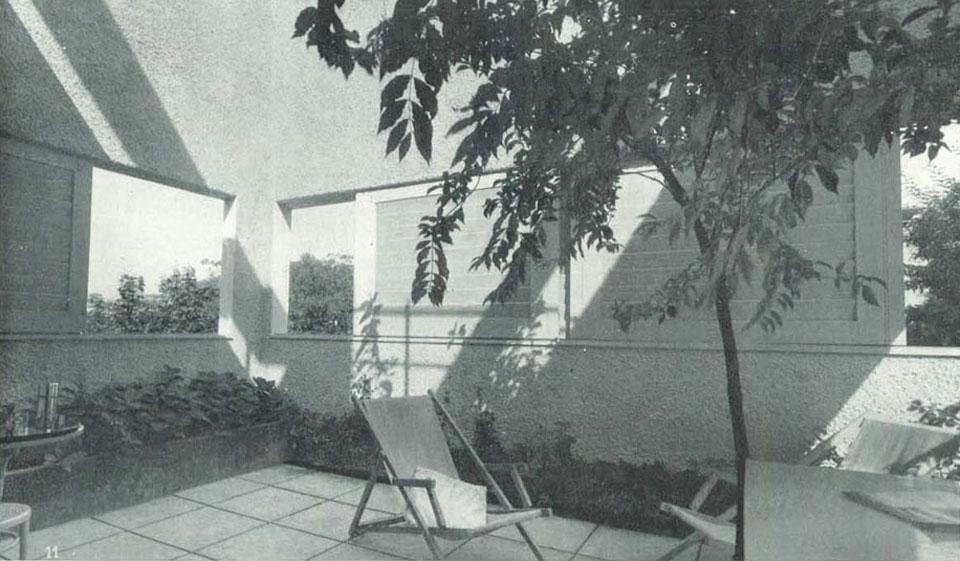 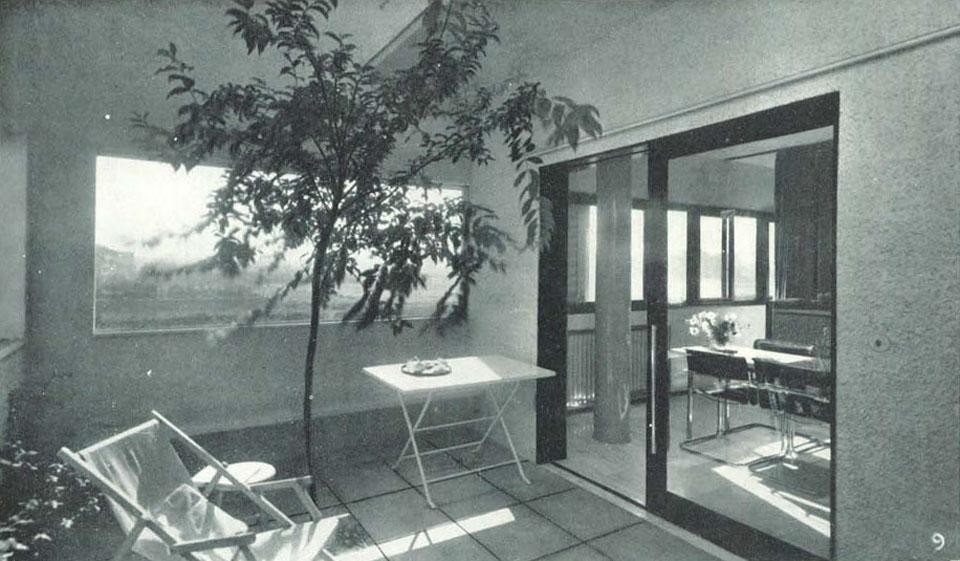 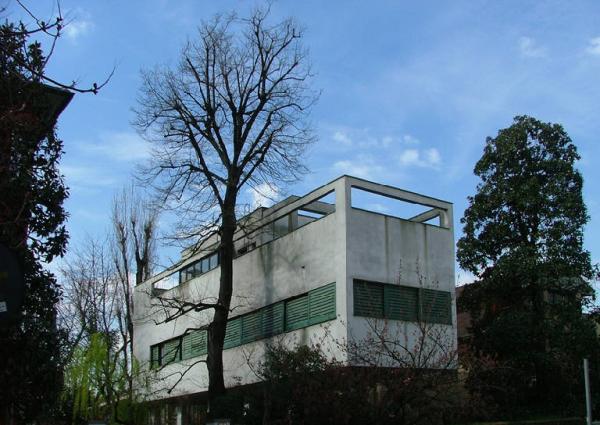 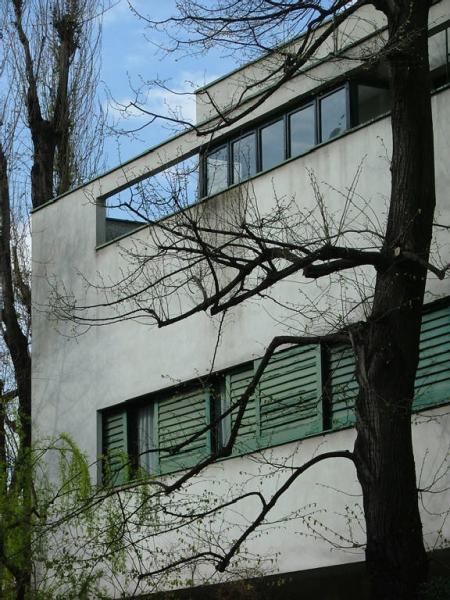 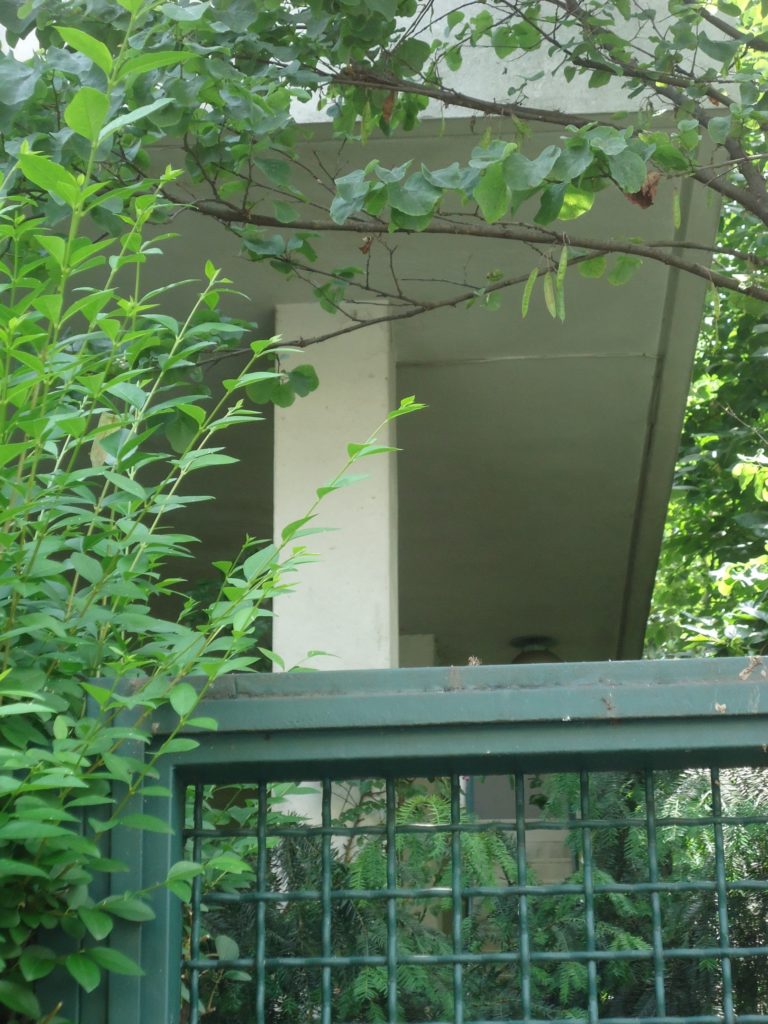 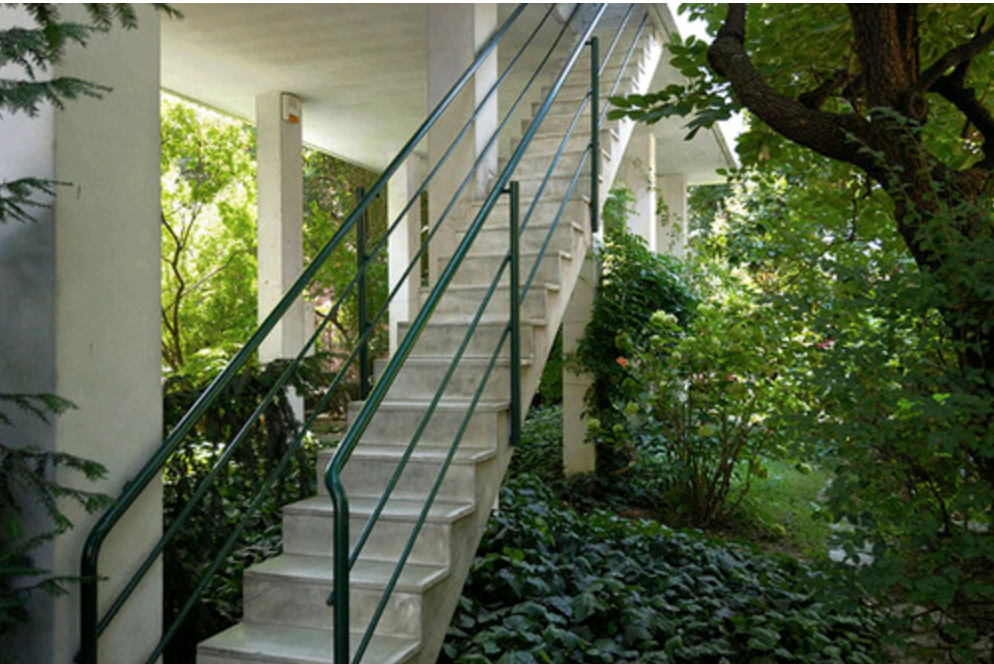 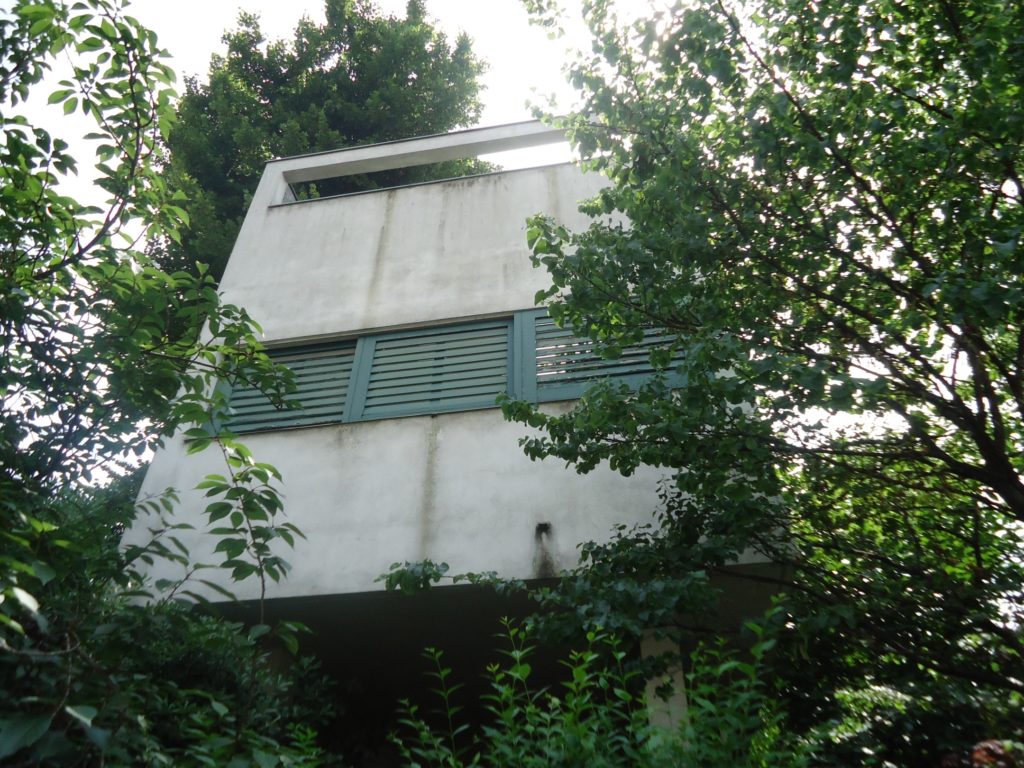 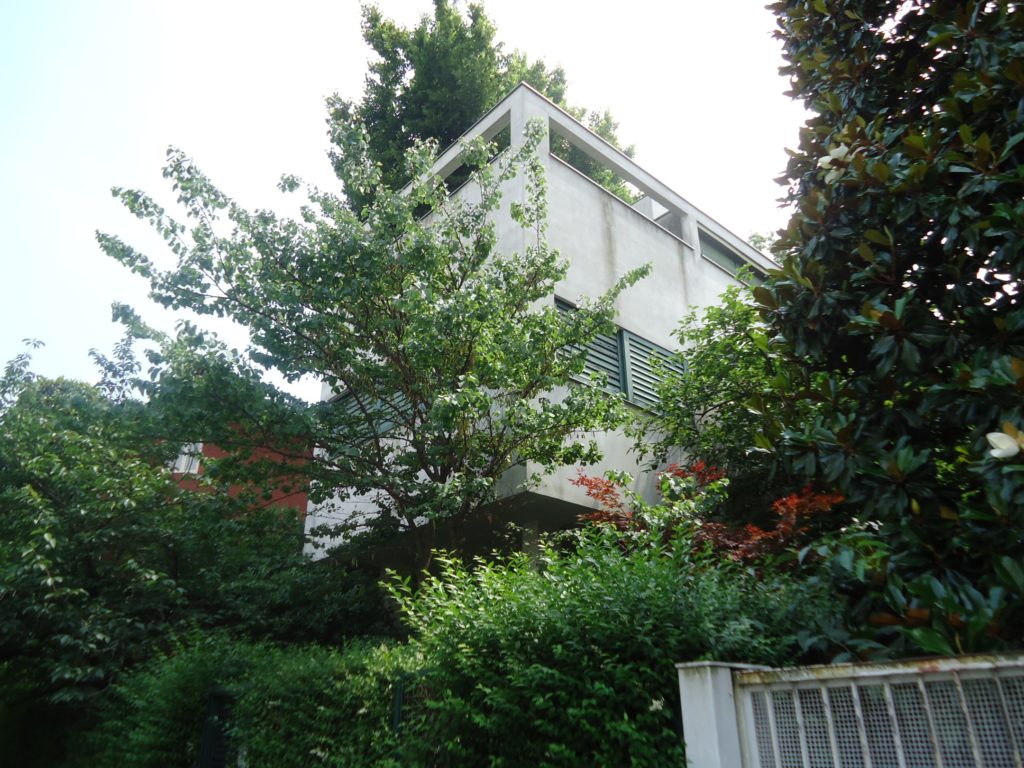 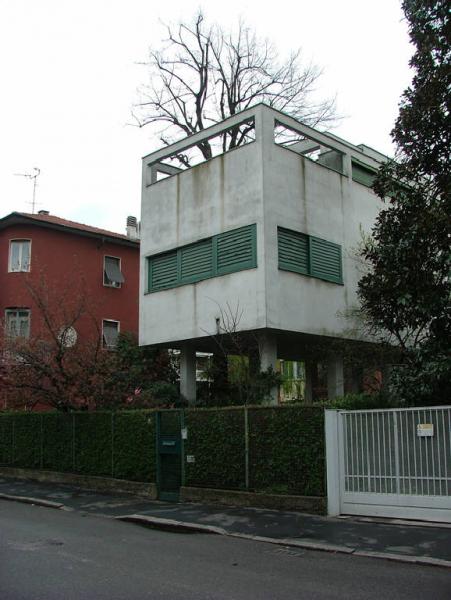