The Deep Aquarium, designed by architect Sir Terry Farrell is home to approximately 3,500 fish species, including coral reefs, sharks and rays, species that can live in this environment to be one of the deepest aquariums world. An elevator underwater allows visitors to observe the environment from a place of exception. The aquarium has become one of the major attractions of the city, acting as a means of conservation and education. The building opened in 2002, although the full papers were not finalized until 2005. From the top floor there is an observatory overlooking the Humber estuary.

The Deep operates as a charitable organization dedicated to increasing the enjoyment of the world’s oceans. He has won numerous awards including: Gold Award for Green Tourism Business Scheme Gold Award for Sustainable Tourism (England) and Silver Award for Major Attraction of the Year 2009.

Located in an abandoned industrial area of 2.45 hectares at the confluence of the Humber River and Hull River in Kingston, East Yorkshire, Sammy’s Point, England, The Deep Aquarium started life as an urban renewal scheme for economic, social and culturally revitalize the city in general. The general decay of Hull in the last 50 years has been extreme.

Eroded cliff face is clearly visible from the historic waterfront of Hull on the opposite bank of the Humber.

In the design of Terry Farrell & Partners is building half, half sculpture, rising dramatically over a spit of land at the site ddonde the River Hull joins the Humber estuary width. The building exploits the landscape on which it is built and inspired by natural geological formations.

Farrell acknowledges that “… this type of leisure buildings is public architecture in its most popular form…”. In this case his intentions has resulted in an architectural metaphor of a wave, an iceberg or a heavily eroded and pushed out by the deeper forces of the earth cliff. The interior windowless largely inspired by the watery depths of the same sea. The goal is to create buildings that Farrells win popular support to close the gap between the causes of elite and popular.

The 5-storey building has 15 tanks with transparent walls for viewing the fish, including the deepest in Europe that has 10m high and is home to 2,500 fish of 120 species.

The building stands on a 30° angle to form a sharp corner point directly above the tongue of land between the river and the estuary. The land base of the building is covered with dark gray and black sheets of aluminum. At the top is coated aluminum panels of large irregular diamond shapes suggesting fissured rock plates. And higher still, the metamorphosis of the carpet, as if by underground heat and pressure had been transformed into gleaming ceramic tiles. The upward slope pinnacle culminates with a crystal clear tones and behind which a high level, which acts as a gallery gazebo faces a broad overview of the Humber.

While the glass gallery on the top floor with the sun shines creates a lightweight appearance, the facade where is located the access to the building, on the opposite side, is a composition of concentrate materials where colors prevail. The walls are coated with materials ranging from medium to dark gray, dotted with small and medium square windows. A large charcoal gray mass emerges in a crazy angle of the lower block, and this culminates in another high level, although much less than the viewpoint of the gallery. In rationalizing Farrell, this is all part of the metaphor of eroded monolith, but has little visual relationship with the other side paneled facade.

Once inside the building, visitors are taken by elevator to the top floor, where you begin the descent through a continuous winding ramp that gradually descends through aquariums, interactive modules, tapestries and other exhibitions. This downward spiral route takes visitors through the fabric of the museum, which traces the chronological development of the Big Bang, through the era of fossil, with the current state of the world’s oceans. Also gradually plumbs the brackish depths and geographical latitudes of the oceans. The main attraction inside the building is the largest tank, with a capacity of 2.5 million liters of water and 87 tons of salt, complete with a tunnel 9m allowing a glimpse of the depths. At the tip of the iceberg a cafe with a glass observation platform outside flying over the estuary is located.

The overall project includes new business and a new swing bridge over the River Hull.

The structure is based on a reinforced concrete core and over 800 tons of structural steel, supported with precast foundation piles, driven by filling in all the lower glacial deposits. In the construction of the structure aspects of defense against flooding and pollution associated with this brownfield site is considered

The materials used in the building are of different colors and textures, including colored concrete, acrylic render, profiled metal, glass and enamel diamond sheets of marine grade aluminum, used in shipbuilding, which take on different colors according how to receive the light and reflections. The tanks have a capacity for 2.500.000lt water and 87tn salt.

To cope with the rain, the aluminum panels were coated with a waterproof paint in black and carefully arranged to form a screen that protects the tinted windows rain. The aluminum plates are attached with hidden fixings and support frames with joints between 5.40 and 0.70mm variables that display the surface behind and create different visual effects.
In “nose” of the building, laminated glass panels were cut along the support structure in steel, while elsewhere glazing systems MERO “Varioclip” were used with an aluminum framing the many windows and features crystal. 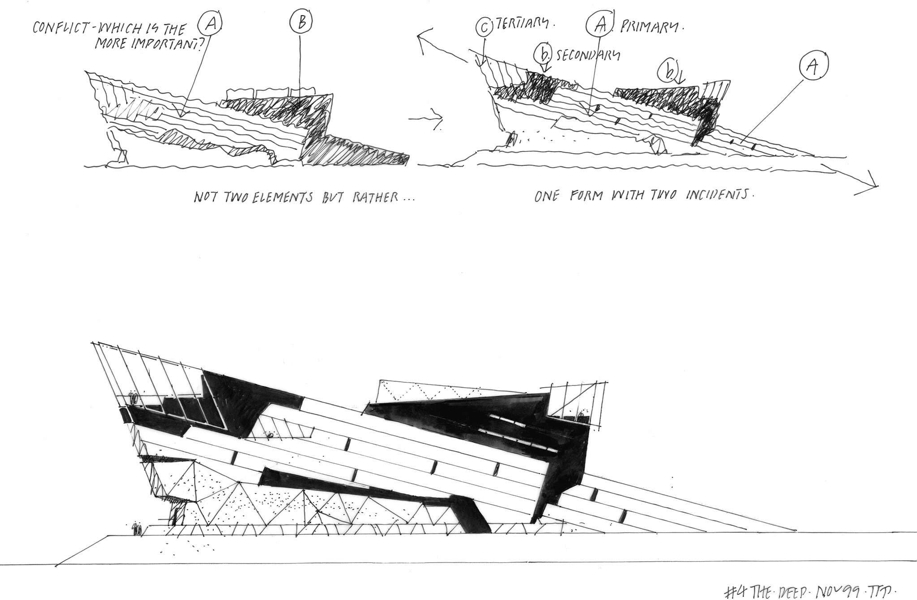 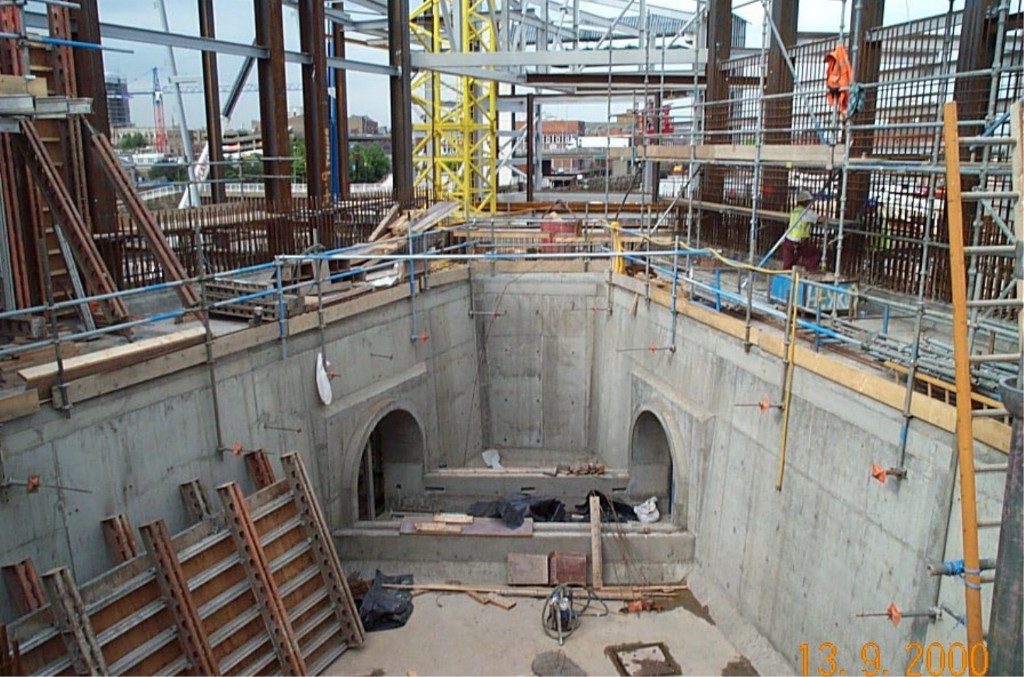 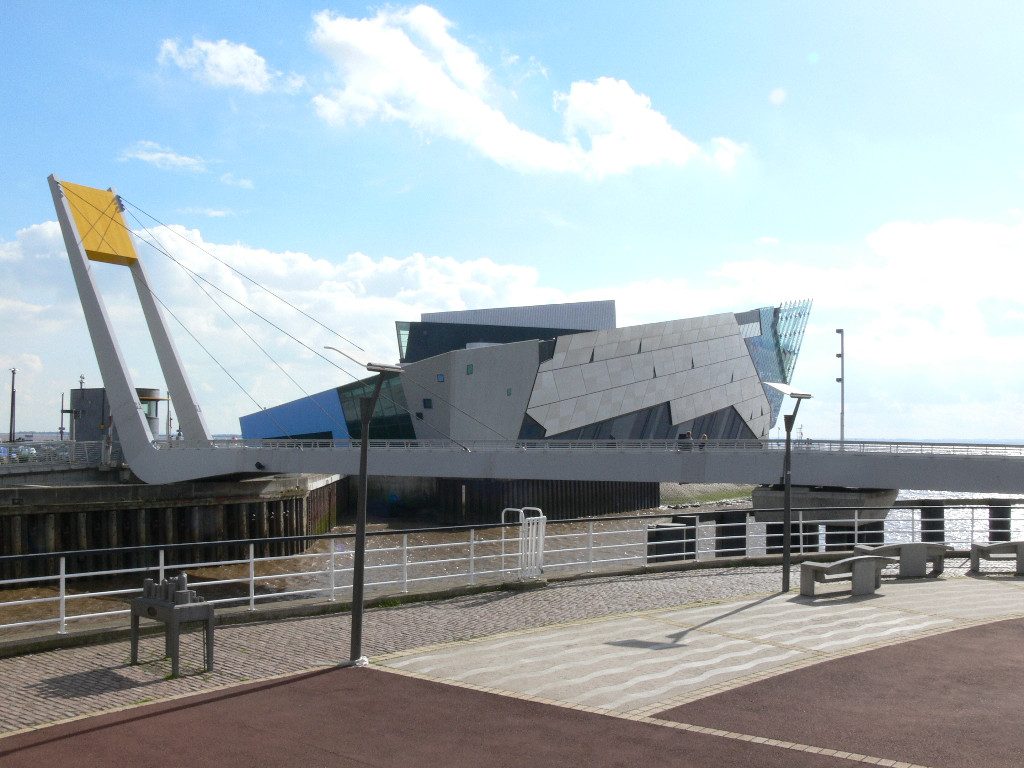 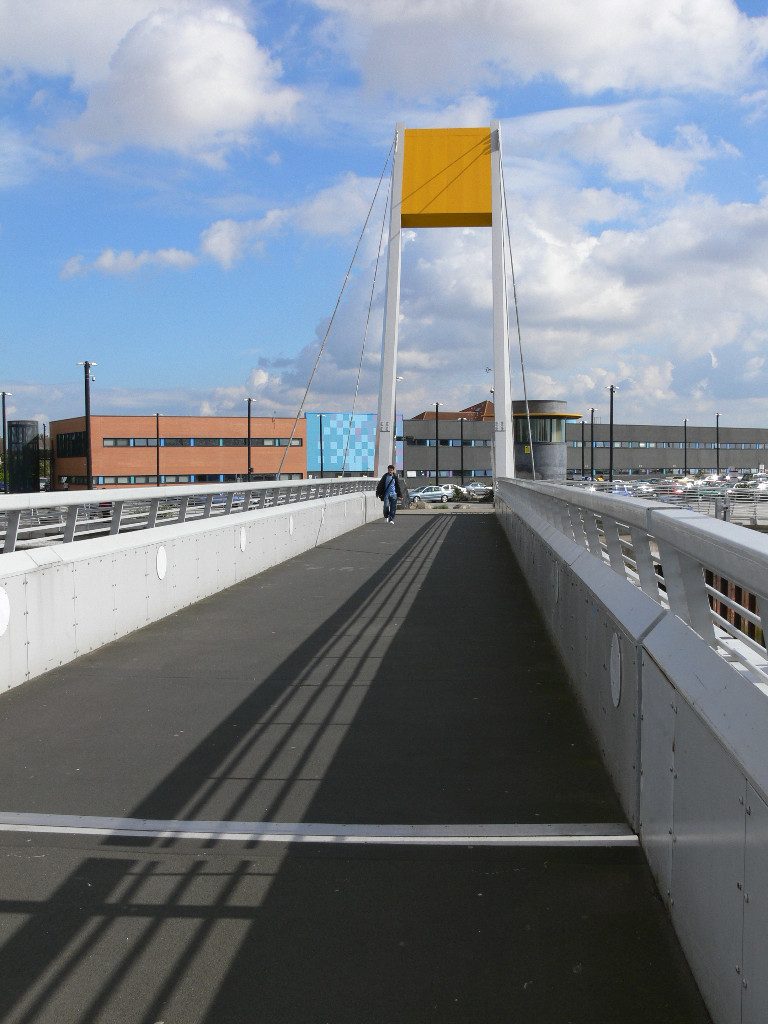 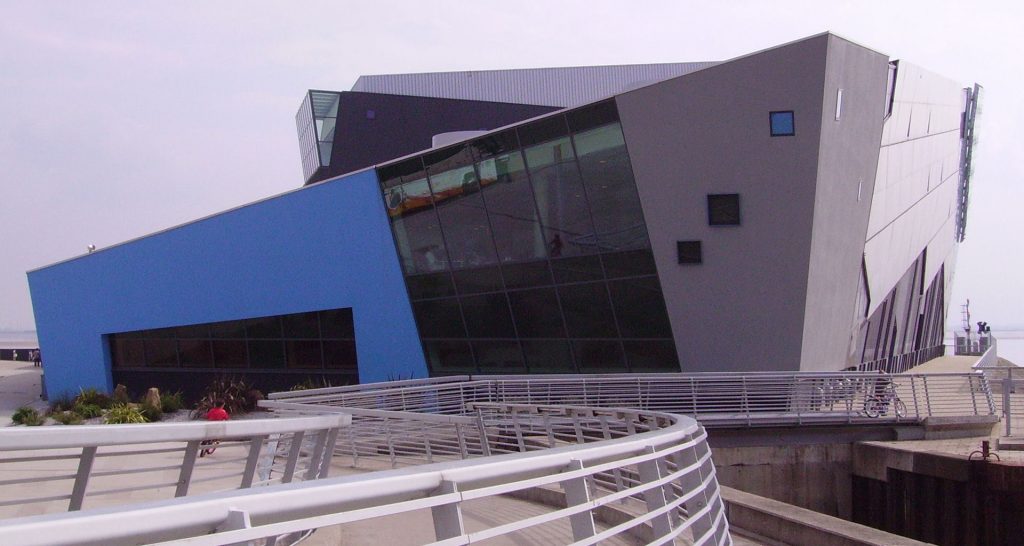 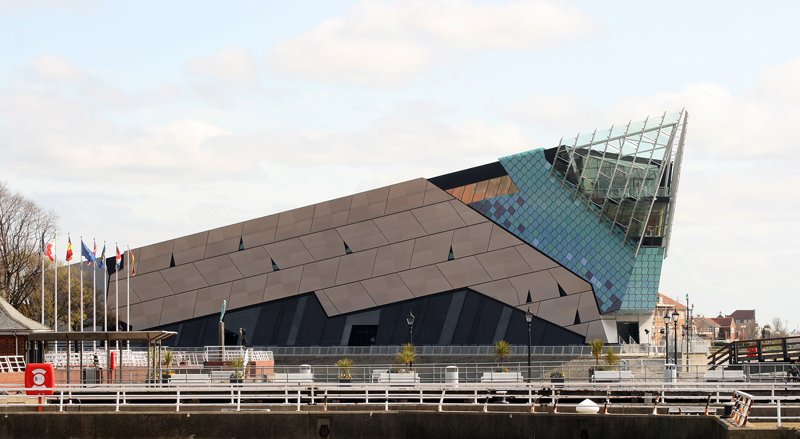 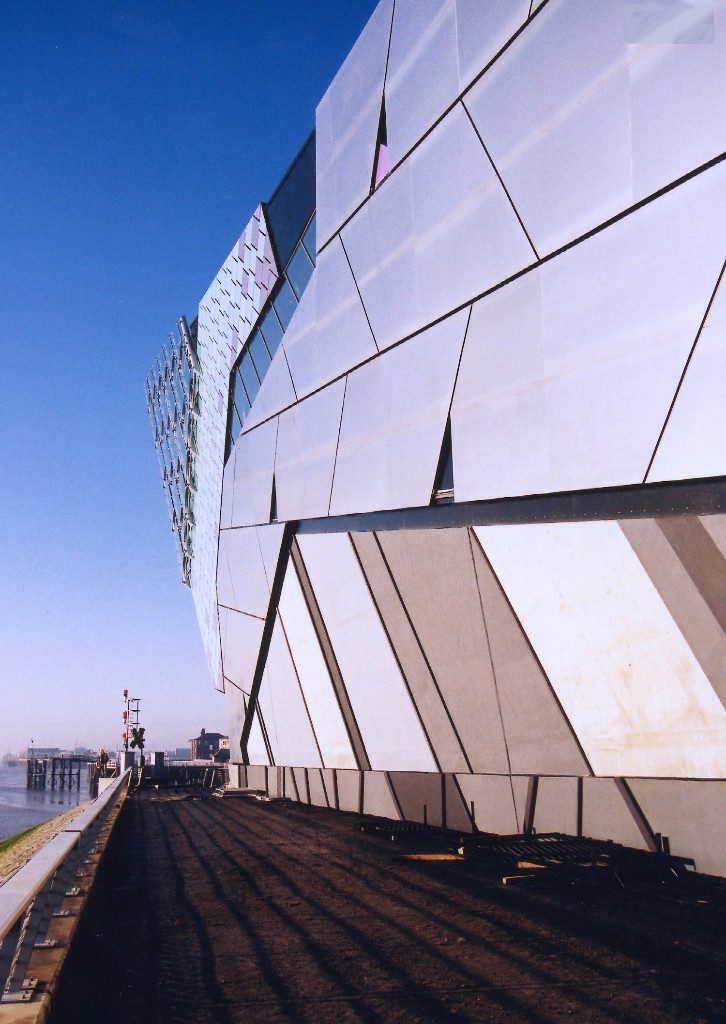 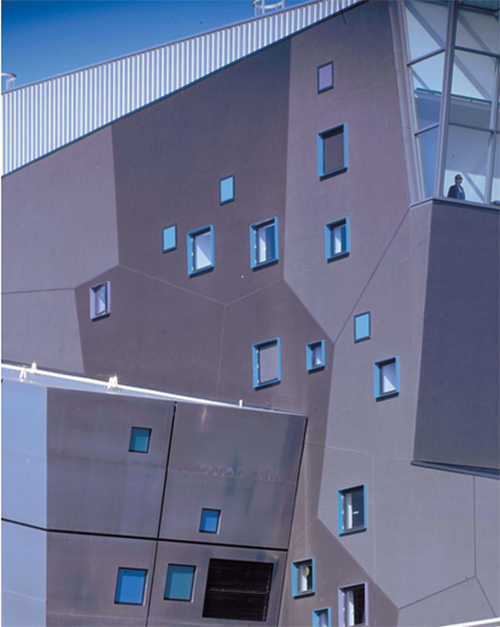 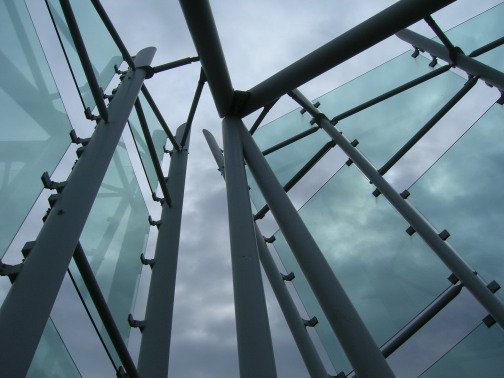 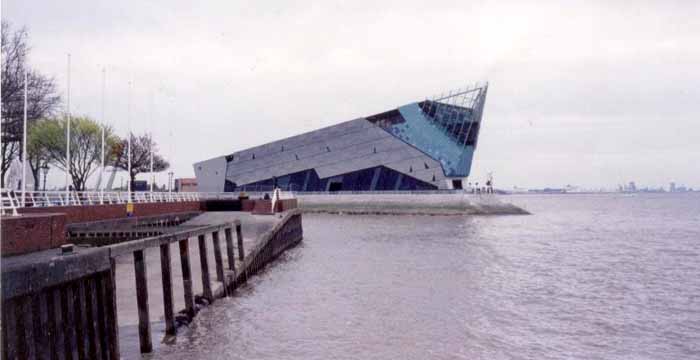 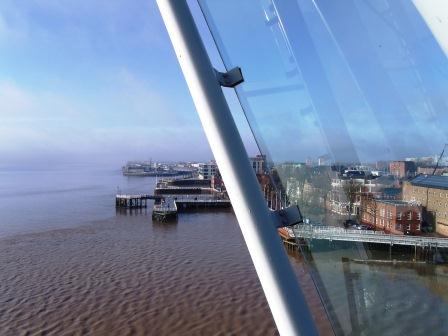 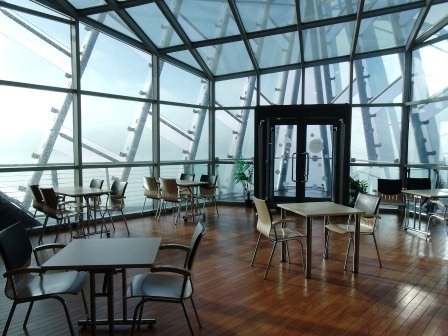 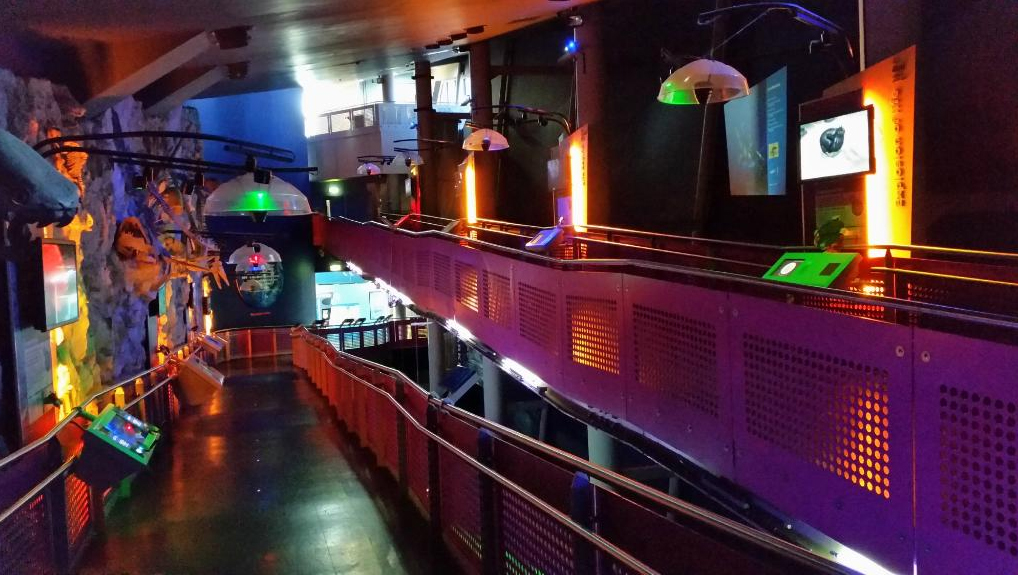 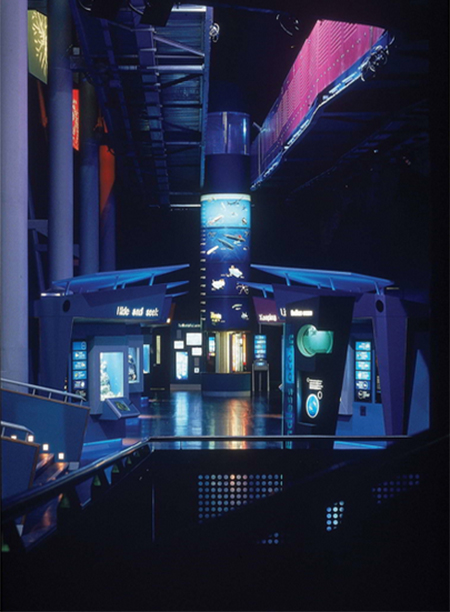 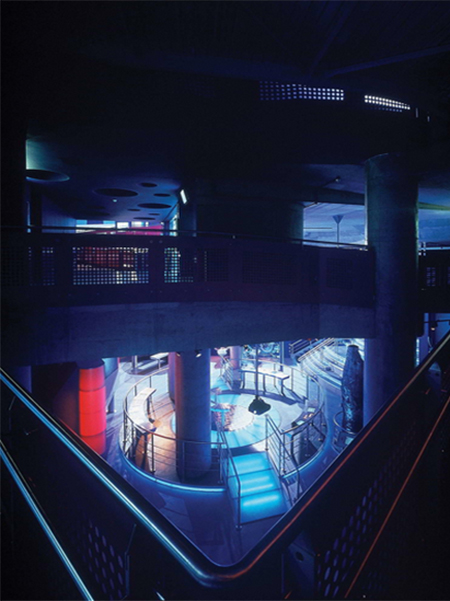 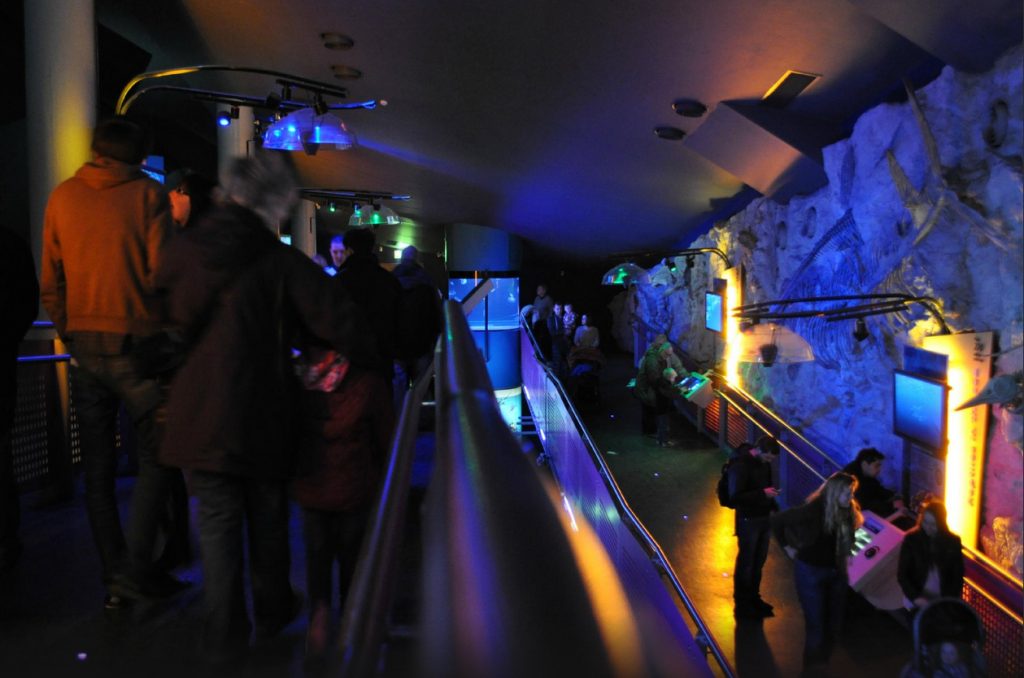 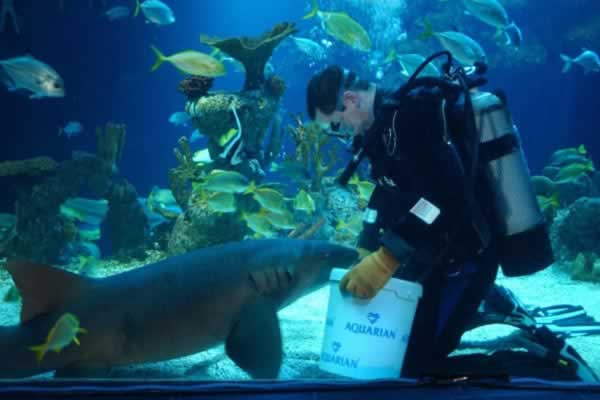 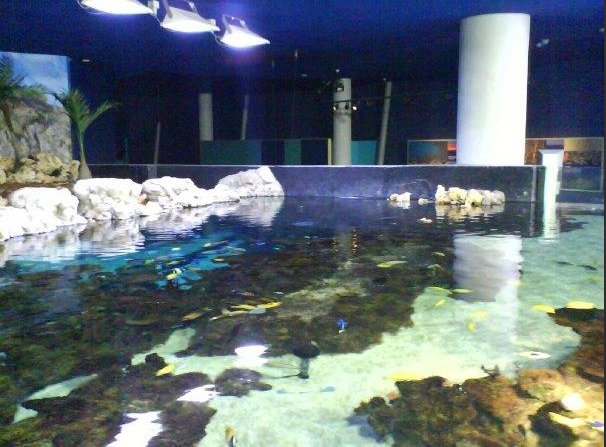 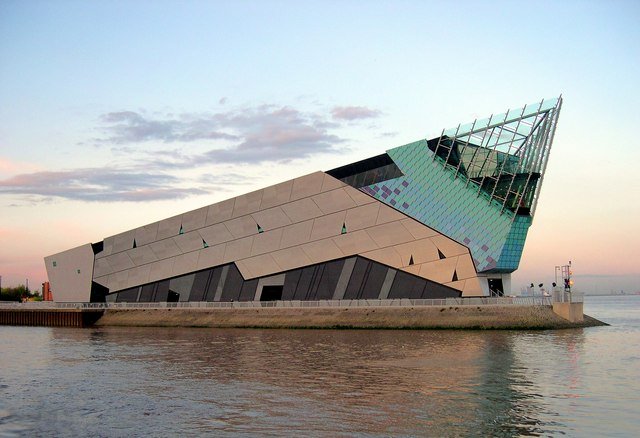 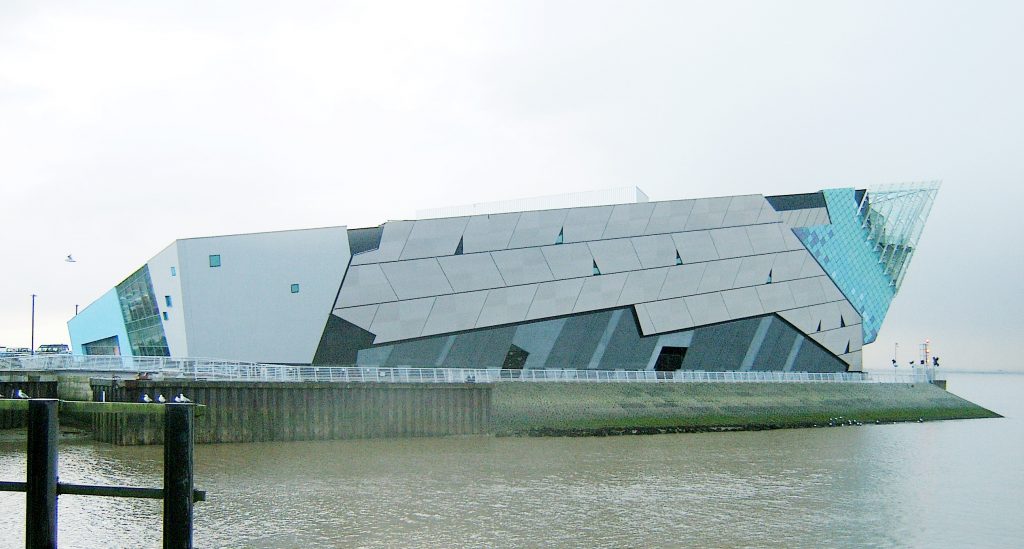 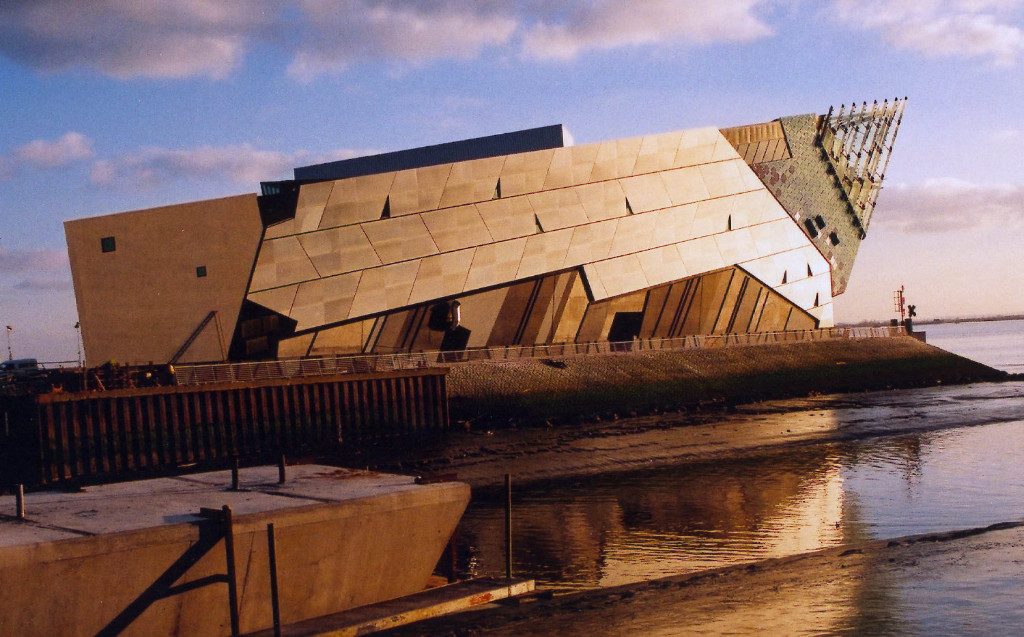 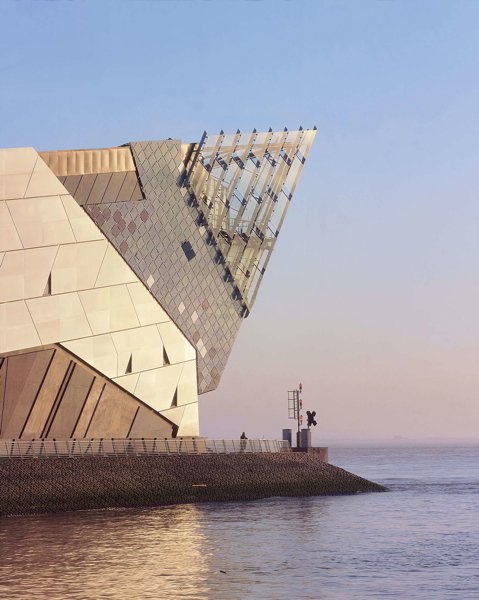 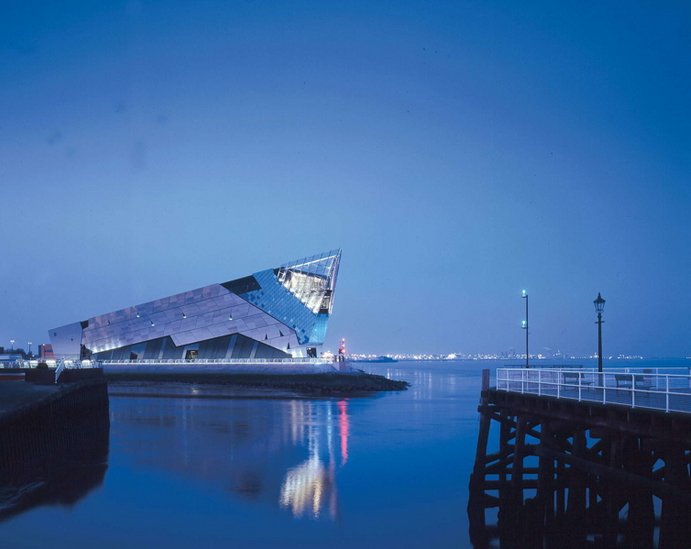 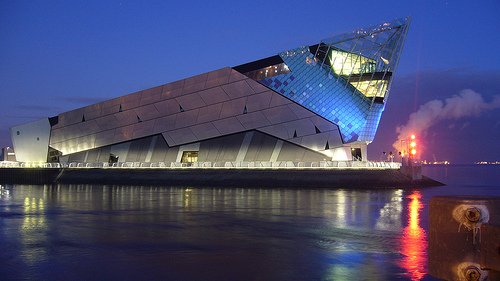