The Solow Building is one of the most controversial skyscrapers in Midtown and at the same time one of the most successful real estate businesses in the area. Although completed at the beginning of a major real estate depression in the city, its owner had pre-rented much of the building, first to Monsanto Chemical and then to Avon Products. With the rental Sheldon Solow made money quickly and that way he was able to keep his luxurious and large office high up in the building overlooking Central Park and a huge and excellent Joan Miro painting.

Solow’s tastes were refined enough to reject the first design submitted by Gordon Bunshaft from Skidmore, Owings, & Merrill for the leaning tower, so Bunshaft proposed the project to Swig Weiler & Arnow Management Co, who accepted it and Made their tower similarly at 1114 Avenue of the Americas, originally known as the WR Grace Building. Subsequently Solow and Bunshaft reached an agreement with a very similar new project whose primary difference is only the treatment of the facade.

At the time of its completion many New Yorkers were outraged by the “violation” of the traditional constructive physiognomy. His argument was that the slope of the new building exposed the sides of adjacent buildings, sides that were never made to be seen by the passer-by and therefore created hideous scars in the urban landscape. In the city there are many buildings with exposed unattractive sides, but critics of this building emphasized that its slope and scale created a magnetic fascination that attracted undue attention on exposed sides of adjacent buildings. Bunshaft realized this effect and, to counteract it, designed the grand canyon from the second floor of the building, which cuts off the potential visual avalanche of pedestrians.

The Solow skyscraper is located at 9 West 57th Street, between 5th and 6th Av, in New York, United States. Its presence is largely responsible for the subsequent remodeling of the Plaza District in the most prestigious office area of ​​the city.

Crossing the building you come to 58th Street, where you face the south side of the Hotel Plaza on which it looms. The facade of 9 West 57th Street has a much larger square, decorated with a large sculpture by Picasso, a mythical bull.

According to Bunshaft, the idea of ​​slope originated by trying to find different ways to comply with the city’s complex zoning regulations and “sky exposure plan”, designed to ensure light and air reached the street. Slope maximizes building capacity that can be contained within a certain height by filling some of the space that might otherwise be lost for setbacks. This type of curved design is more expensive to construct and some interior space is lost since the head of a Tall person could bump into the windows before his feet hit the wall.

This gigantic office tower, 130,064 m², set new standards in design with the most elegant concave façade of curtain walls of the city. The north and south facades of the Solow Tower project slightly from the edges of the building and are extraordinarily sensual due to the very fine details of the window joints. The exterior columns of the building protrude from below the gutter at the same angle of acceleration for both engineering and aesthetic reasons. 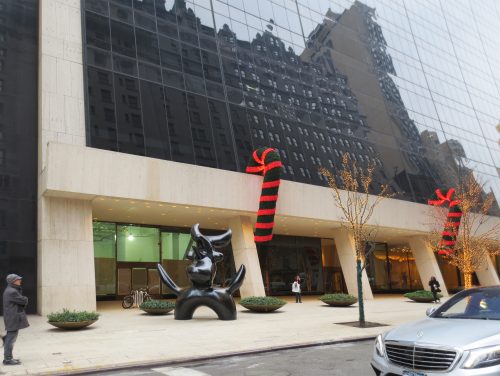 The building has an underground garage, commercial space on the north side that borders 58th street, an underground space occupied by a restaurant Brasserie 8½, a stock trading floor occupying 2-3 floors, a mechanical plant, a kiosk in the lobby and 34 speed elevators subdivided into different sets of floors.

Bunshaft camouflaged the immense “mechanical plant” of the building that houses heating, ventilation and air conditioning (HVAC) equipment on the 4th floor, making an office floor appear from the outside.

Each floor type is rectangular in shape and has a central service core. These spacious spaces with spectacular views and great quality vary their offerings from those located on the sloping north facade that continue to provoke jokes and criticism to those who enjoy the views on its magnificent east and west façades with large cross stands exhibited contained within A hollowed bay, one of the city’s few “high-tech” public exhibits. The floors above the 23rd floor offer an unobstructed view of northern Manhattan and a full view of Central Park and The Plaza Hotel.

The building has a basement of 5,574m2 with its own escalator access in the middle of the facades of Calle 57 and 58. In 2000 this place was occupied by a restaurant. In order to provide a better access to the new activity, the two escalators in the center of the south facade were removed and replaced by a curved glass enclosure with a large curved staircase leading to the large restaurant. 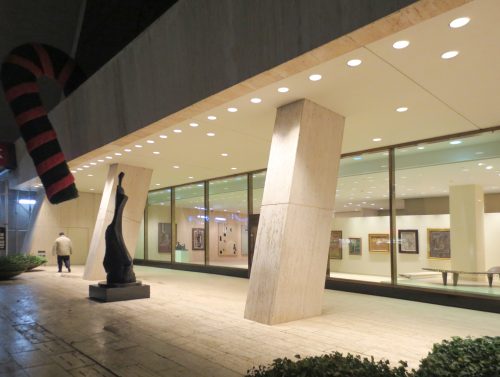 The building recedes a few meters from its construction line, intensely reaffirming its presence street level by covering its sidewalks with the same travertine marble used in the facades and lobbies.

The north and south elevations of the tower slope gradually outwards and widen as they approach ground level. This innovative strategy allowed the design to meet the strict recess rules of New York City, which seek to break the mass of buildings so that natural light can reach the street.

The 130,064 m² building features a steel structure with two travertine-clad finished walls containing structural steel wind systems and mechanical systems. The exposed part of the wind stand is covered with black duranodik aluminum. The north and south façades are lined with bronze glass.

In addition to the mythical bull of Picasso on the sidewalk of Calle 57, inside the building exposes near the center of elevators a high sculpture of Giacometti