In 1966 the Newspaper and Shizuoka Broadcasting Corporation instructs the Japanese architect Kenzo Tange construction of its headquarters in the district of Ginza, Tokyo. This is the first project that manages to unite Tange spatial concepts of architecture and urban planning. The germ of this idea is already in the Tokyo Plan 1960. It is also the first embodiment of the ideas Metabolists Kenzo Tange, inspired by organic growth and developed in the fifties.

Due to the small size of the site, Tange decided to design the building vertically, which, moreover, goes with the spirit of the advertising company responsible for the project. The architect aims to create a true mega urban structure (a term coined by his fellow Metabolist Fuhimiko Maki ), which can develop organically, which can be “plugged in” capsules to a core infrastructure.

“I came to the idea of ​​building a” pillar of the city “with an intention to be an indirect stimulus… I built this tower with the idea of ​​bringing the urban scale in this dynamic part of the city”. – Kenzo Tange

The project is located in the district of Ginza, a focal point of the city of Tokyo, Japan. The site, just 189 m2, is triangular in shape and is surrounded by major traffic arteries of the city in addition to Tokaidoexpress train line. Nearby are also other transports as the Shimbashi Station and Toei Asakusa Line.

This is the first project that the architect Kenzo Tange Metabolist can realize their vision of architecture and urbanism. The movement succeeded in Metabolist Japan in the period after World War II, when the bombed cities began to recover and re-emerged economic growth.

Tange was more of a mentor than a mere member of Metabolist movement. He presented these concepts at the CIAM congress of 1959. Later, as a professor at MIT, developed these concepts with their students and thus reflected in the manifesto:

“Metabolist is the name of the group, in which each member proposes future designs of the world comes through their designs and concrete illustrations. We see human society as a vital process – a continuous development of the atom to the nebula. The reason we use a term as biological metabolism, is that we believe that design and technology should be a trigger for human society. We will not accept metabolism as a natural process, but try to actively encourage the development of our society Metabolist through our proposals. ” – Metabolism: Proposals for the New Urbanism, 1960.

Tange shown in this project his vision Metabolist giving the building a core of facilities that can be plugged roughly capsules according to the need of building users. Proof of this are the terraces or voids that are on or between any of the modules. While the space is not needed it is left as a terrace. At the time that the expansion of offices needed, a new capsule would occupy this space.

The tower comprises a structural core and infrastructure that is “plugged” office modules. It is a circular core radiating a series of modules. Circular tower of 7.7 m in diameter and 57 m in height, containing the stairs, two elevators, kitchen and toilets on each floor, and serves as a platform to enter each of the modules of offices.

The total building area is 1493 m2. There are a total of thirteen individual offices into five groups of two or three modules asymmetrically connected to the central core. Each individual unit has a height of 3.46 m. Clearances between each group of offices, which are occupied by terraces could eventually accommodate new office modules, an idea that never materialized. The building today has the same number of units when it was erected in 1967, a fact which shows that the idea of metabolic growth Tange has never been realized.

On the first floor, set back somewhat inland, a candy store is located. The modules located above this floor are placed in line with the existing buildings on the block, while others are located toward the intersection of the streets surrounding the site.

The building consists of a structural core and infrastructure arising projecting a series of capsules. The structure is mainly of steel and reinforced concrete, formwork with aluminum plates that were left as coating and exterior finish.

The structure is mainly made of steel and reinforced concrete, while the capsules are basically steel and glass boxes. 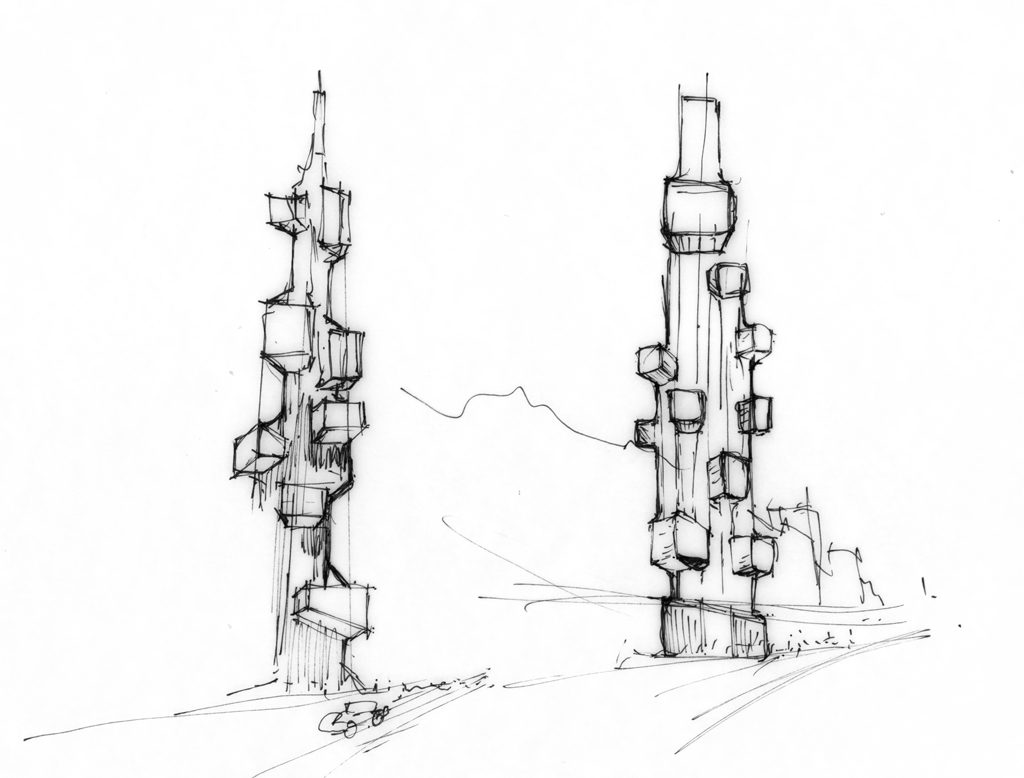 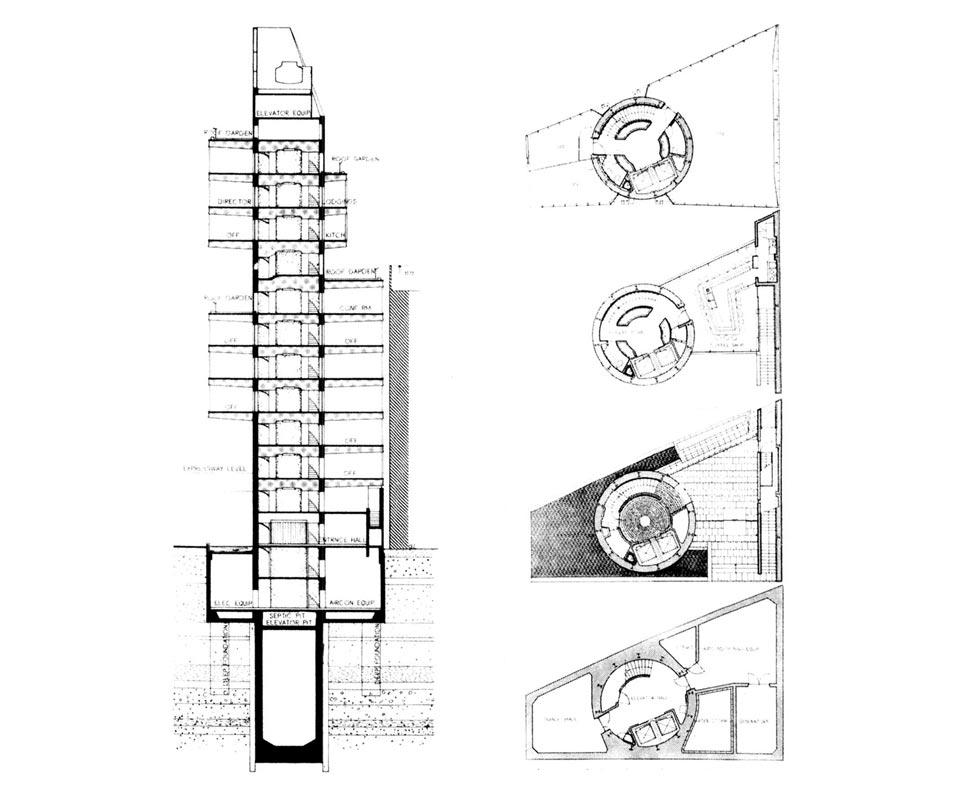 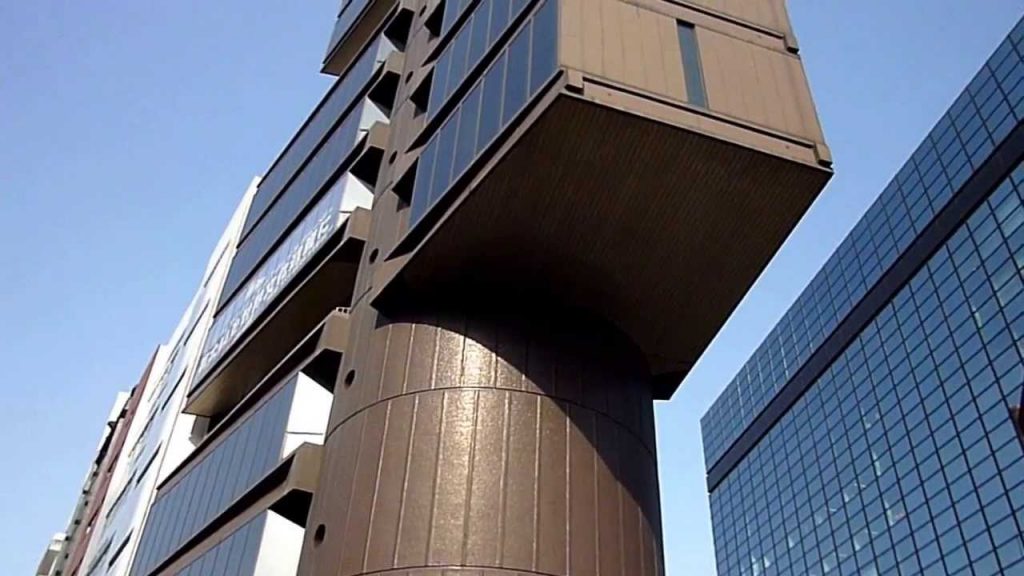 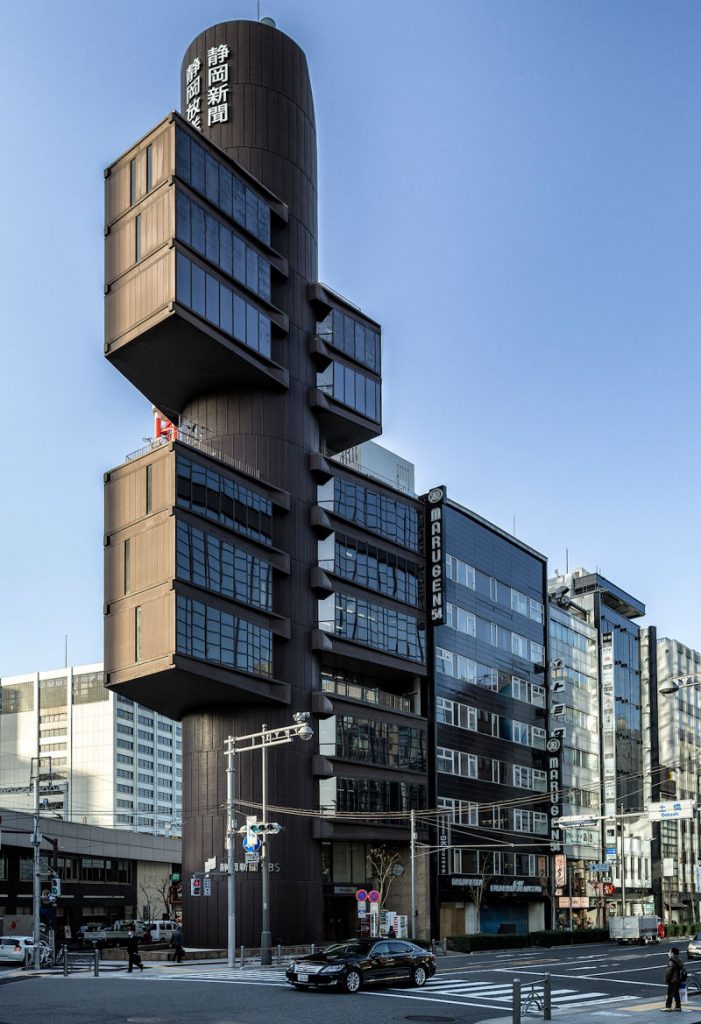 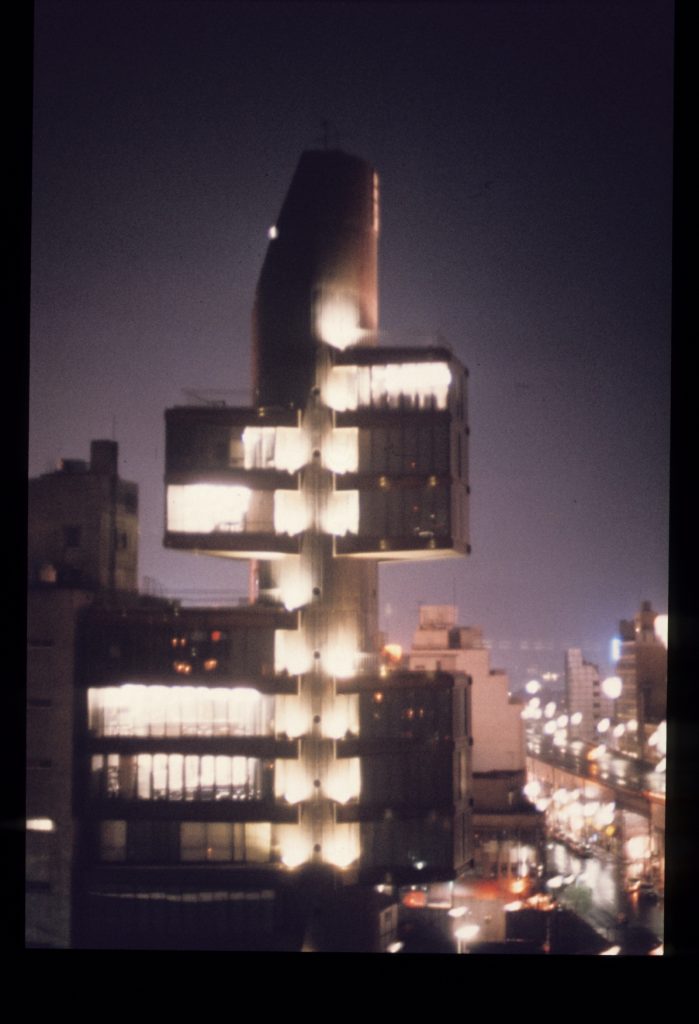 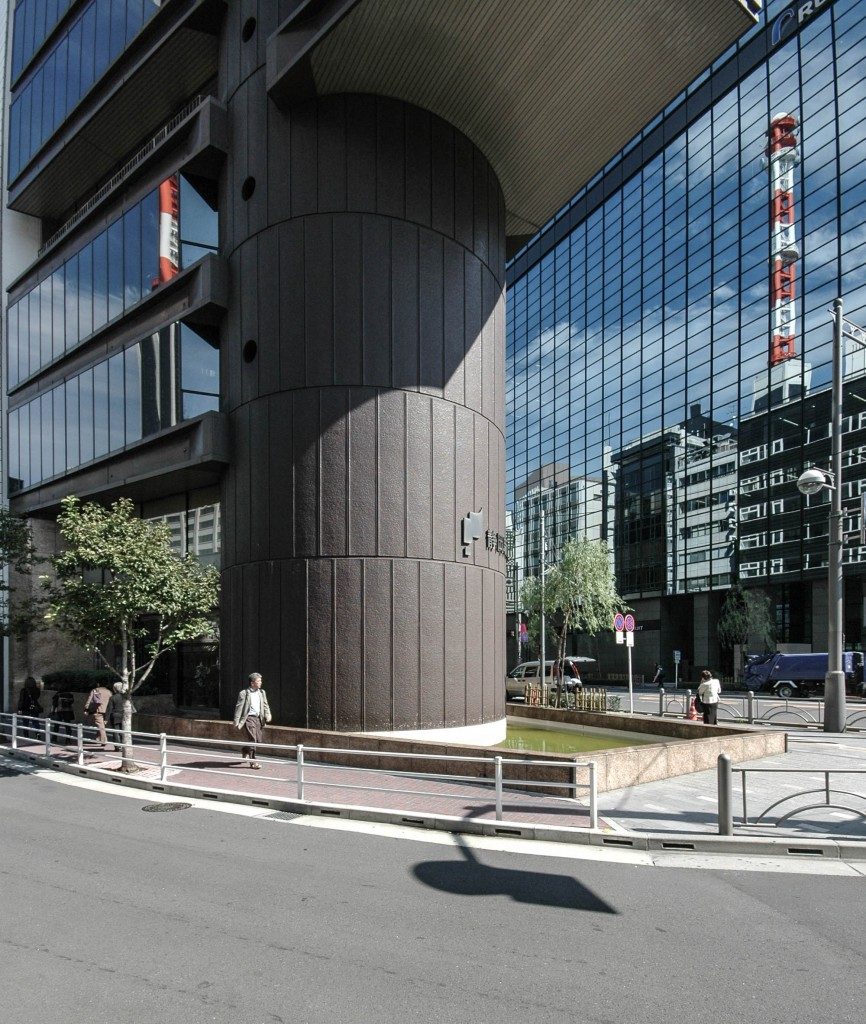 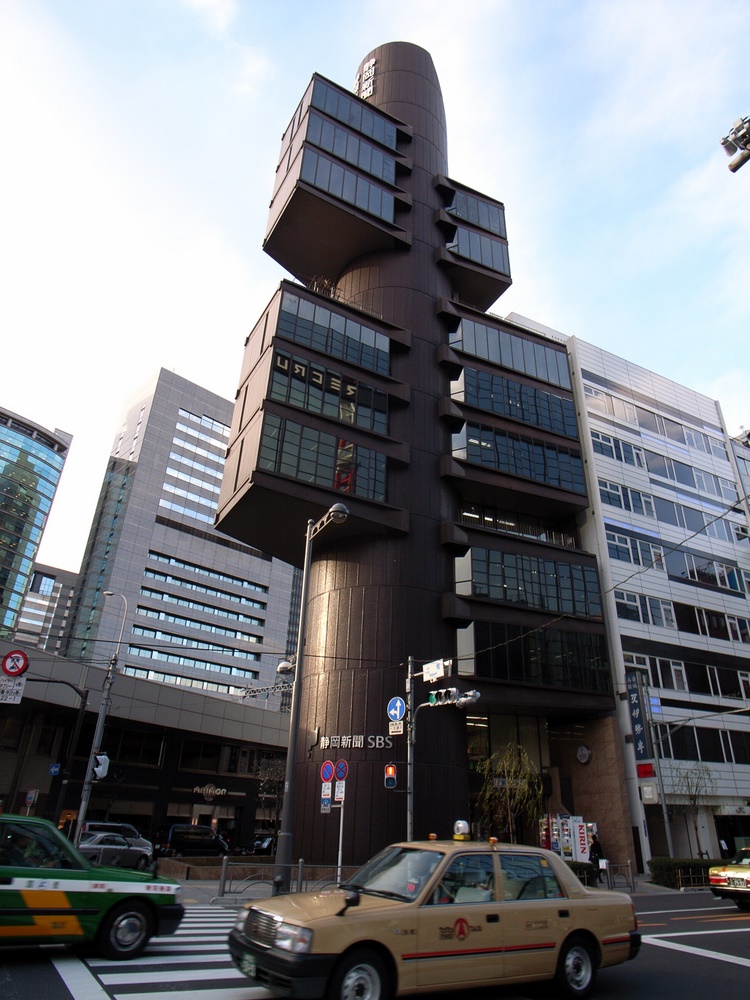 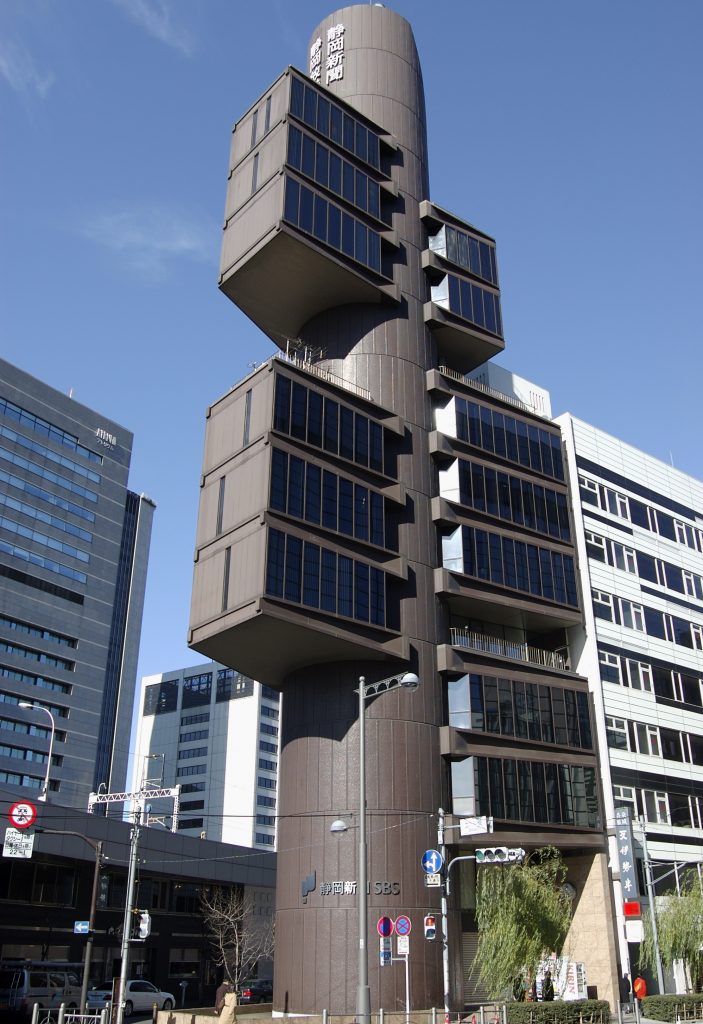 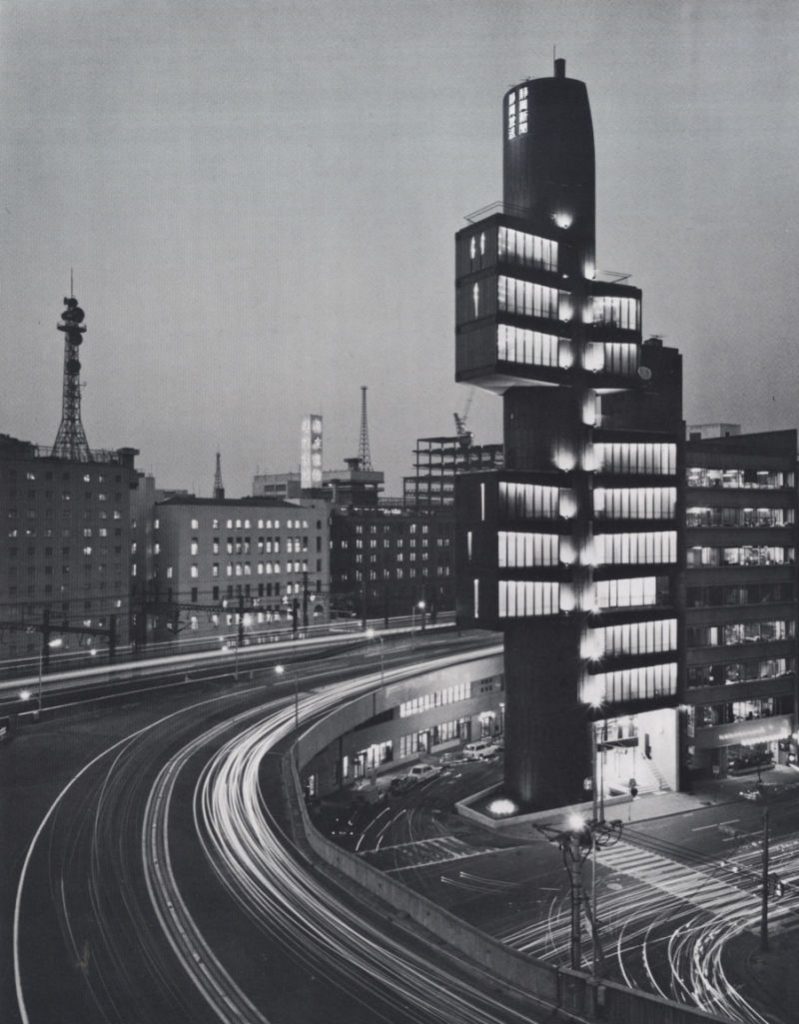