… “The precariousness of the means and the prevailing amateur building techniques mean that in much of South American architecture, the presence of marks mixed with traces of hand tools is inevitable. Seen this way, a building is not very different from a sandcastle or a mud pie.

Pompeia spaces in Sao Paulo, designed for citizens to play and meeting, are full of these marks; in this case, you left by workmen filled with ambition and generosity “…  (Lina Bo Bardi)

With the enormous creativity that characterizes Lina Bo Bardi, Brazilian architect, the leisure center project SESC Pompeia Factory, rehabilitation and leisure center of an old factory barrels of oil embarking Sao Paulo. This is a late work of the architect, a return to architecture, as their creative abilities led her to explore other fields collaborations in film, stage opera and theater, writing and journalism, painting, cultural activism, design furniture, fashion and jewelry.

The SESC was built in the grounds of the former cooperage, Rua Clélia 93 Pompéia neighborhood, Sao Paulo, Brazil.

Vila Pompeia, also concocted simply as Pompeia, a suburb of the city of São Paulo, located between the districts of Perdizes and Lapa. It borders the neighborhoods of Perdizes, Água Branca, Lapa, Barra Funda and Vila Romana.

The old middle class neighborhood socioeconomic change scores due to the commissioning of buildings of high standing, though its inhabitants still face chaotic and constant flooding of streets, a problem exacerbated by the vertical integration and lack of investment in infrastructures.

Factory elevation above Barao do Bananal

It can be said that the way to understand the architectural program in Pompéia has to do with a way to be in town and occupying public spaces or collective, almost an exercise in “micro-urbanism”. The project is planned as aggregation; the context is understood as debris on which it intervenes. Is it an “operation of architecture” would be called to make another project. Stated another way, is a building that sits between the intervention and invention (Philippe Blanc)

The works of Lina Bo Bardi certify a popular creation potential, giving space and voice to make it happen: the spaces sometimes considered “ugly” and unfinished invite to be constructed and reconstructed with the victory and tear. The projects are an appropriation, digestion and proposal of a new modern local movement, Brazilian, from the incorporation of the people. This idea permeates the concept of free will that distinguishes the work of the architect, as the MASP, with large demonstrations. This same form and thought also gives strength and meaning to the SESC Pompeia.

Accompanying the existing volume of old cooperage, the architect added two vertical buildings attached to the factory by aerial walkways.

Much of the design of the SESC Pompeia was defined on the ground, as the architect moved her office to the factory during rehabilitation. In this project Lina Bo Bardi decided to keep most of the complex as it was to preserve the characteristics of the place.

In order to maintain existing spatial qualities on the site, the architect focused placing objects freely within the space, like a thin concrete structure which divides the main room into a library, an exhibition space and lounge group, with a fireplace and a river that runs through them all.

This leisure center consists of spaces of the old factory and two volumes five floors with a block of tennis, pool, workshop area, library, living rooms and exhibition, auditorium are distributed, a restaurant and a large solarium.

Open for expression or creative process space is frequently invoked by architect at SESC Pompeia, theater dissolves traditional form of theater for opera and adapts to the requirements for the works that she represented.

The public is always in front the other part of the public, contrary to what traditionally happens in a theater in which the audience is faced artists who, in this case, they have to create new forms of expression and behavior in a scenario with two fronts.

The new project incorporates internal factory street, making it a stage for spontaneous demonstrations or scheduled performances. The street sloped, enters the cultural and services, program leads the visitor to a reserved area, which mostly houses the pool and sports area. Inside the plot there is a meeting of “tracks” for pedestrians, the main one is covering the Arroyo de Águas Pretas (Córrego das Águas Pretas).

The original structure was made of reinforced concrete and masonry trusses. The space between the inner sheds are treated as a street, sidewalk extension of Rua Clélia, strengthening the structure of the factory.

The old factory, built from imported and sophisticated technology at the time had to be reinvented. The draft proposes SESC Pompeia maintain clearance of the sheds, but suggests catalyze activities and revitalize the place. The functions of the old structure would be redesigned and manufacturing technology project become a modern project focused on popular applications like swimming pools, cafeteria, library, exhibition halls, sports facilities, etc.

So that the space could accommodate all planned program and keep the old factory building two towers at the end of the field, a decision that granted a monumental aspect to the complex would be necessary.

Some craft construction processes were included in the reform of the factory: the storm sewers of internal streets were made with a simple unusual technique in modern aesthetic. The mosaics of the bathrooms refer to buildings and folk arts, a mirror of water with pebbles permeates the floor of the shed factory.

The waters of the Córrego das Águas Pretas defines a “no buildable” area and substantially determines the project. Opting to keep the beautiful barns of the old barrel factory and covering the creek with a wooden deck, building terrain impossibilities are respected and taken to the architect to build in two areas, separated by a trickle.

The extension of the functional program that requires vertical integration and distance for two buildable spaces, suggesting no less effective simple solution, but the occupation of the airspace and robust gateways. The result is a seamless integration and continuity in activities, providing circulation spaces.

The whole project shows an expressive austerity in material and formal condition, with a strong artistic expression.
The SESC Pompeia new buildings were built with reinforced concrete and rustic seen. To lighten their facades “holes” are distributed amoeba shaped as windows, to which the architect calls “Spanish civil war holes”, “Holes Spanish civil war.”
Concrete is used carefully and varied. In the shuttering of the water tower casting burrs, also in mortar lining the interior walls is controlled. On the walls of the towers were left in sight marks the horizontal and vertical tables and their primitive drilling.

In the concrete walls of the volume that houses the courts of SESC can be read not only marks horizontal formwork tables, but also arrivals beams interior slabs and drilling scaffolds: visible expressions of that condition which has the architecture being imprint of her own construction. 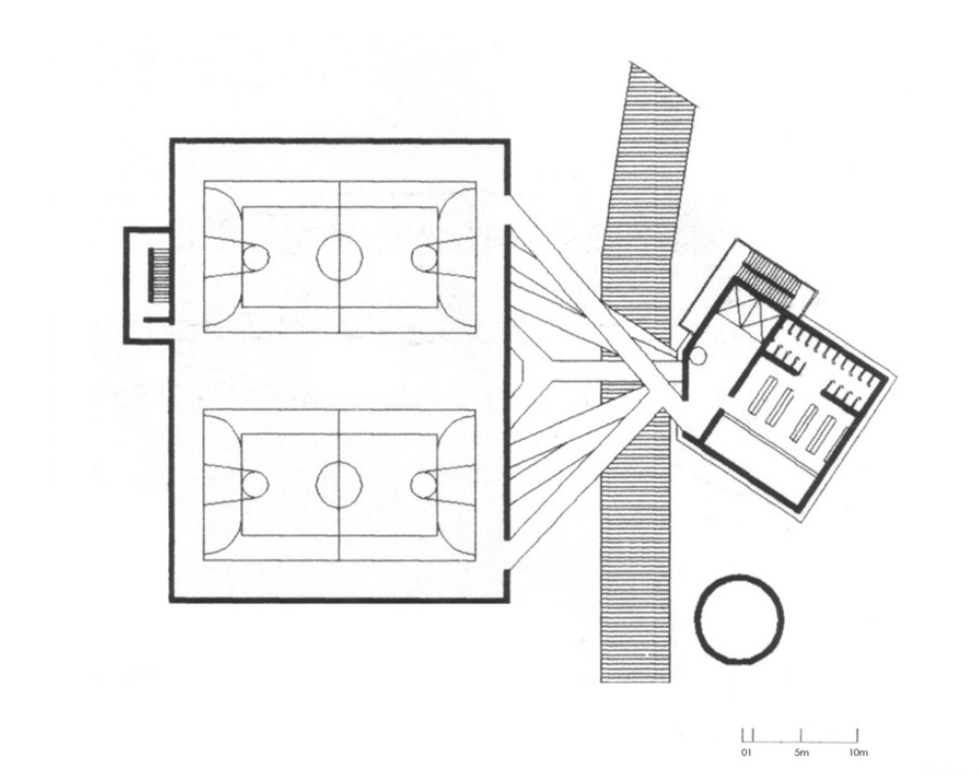 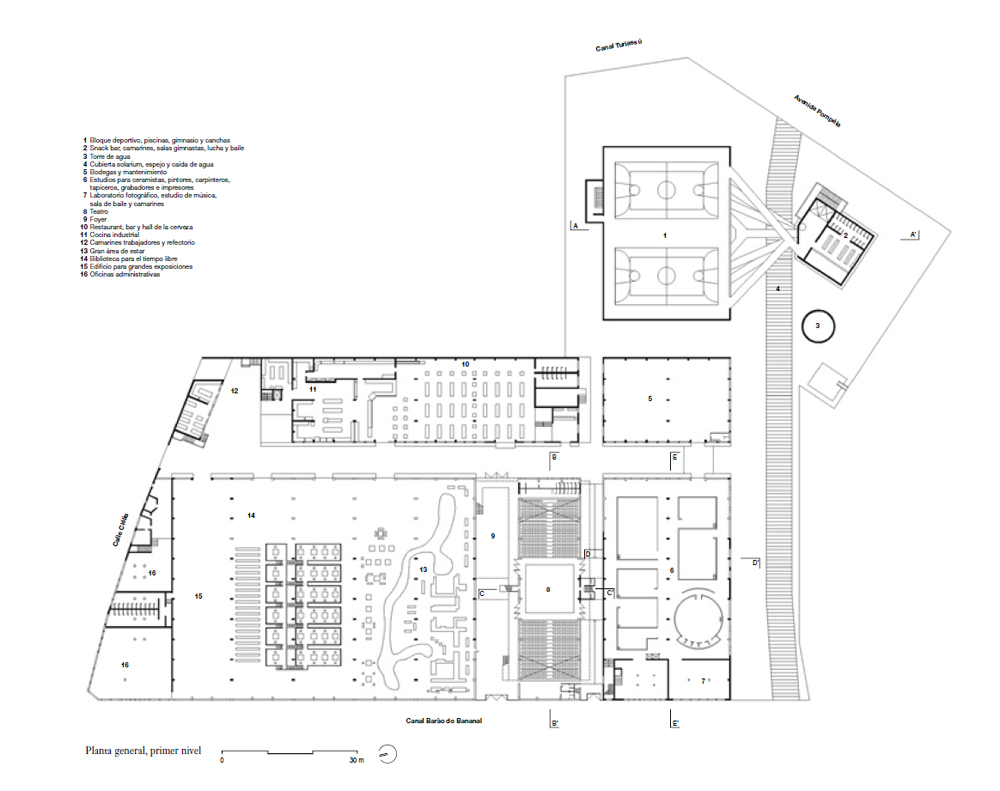 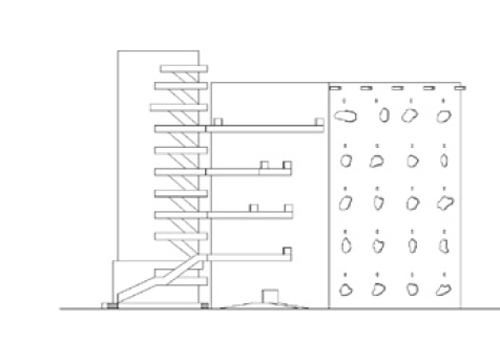 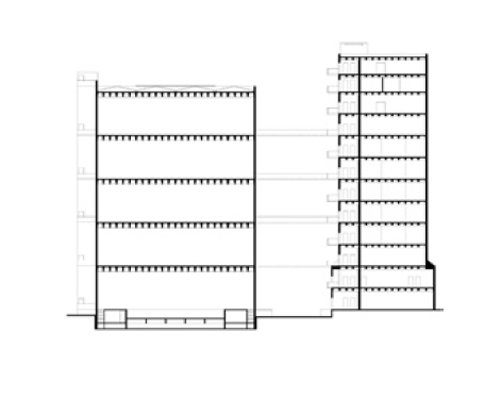 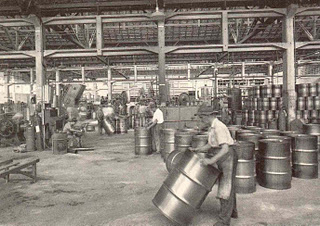 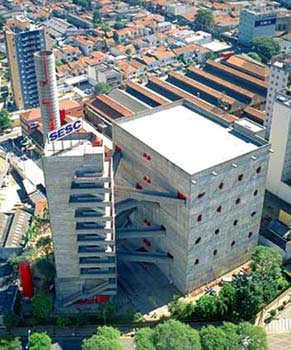 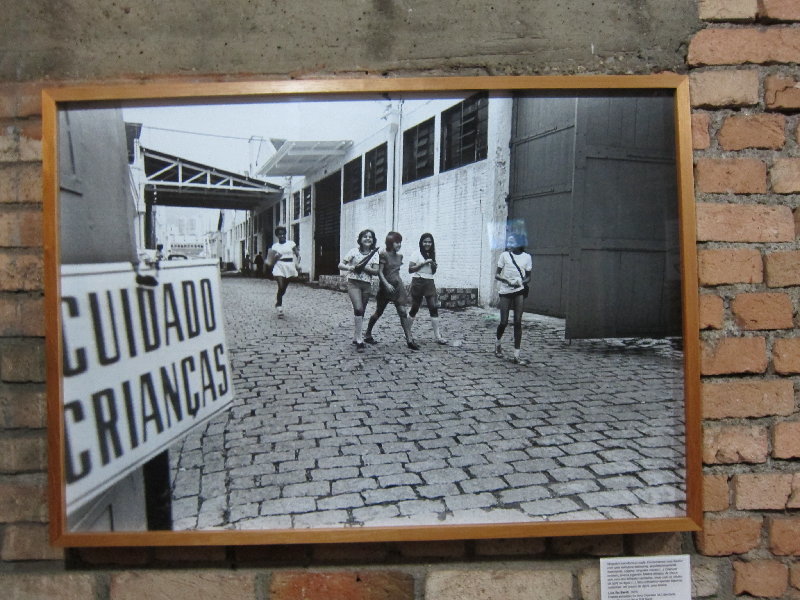 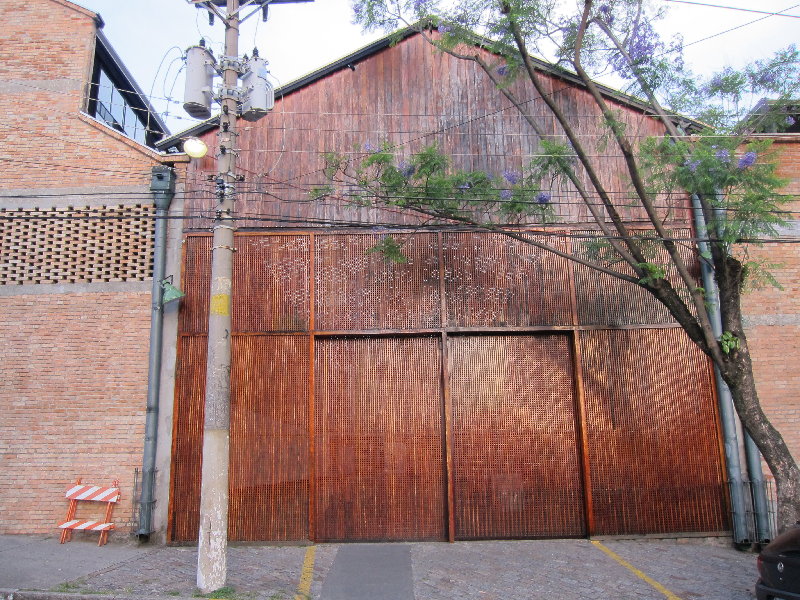 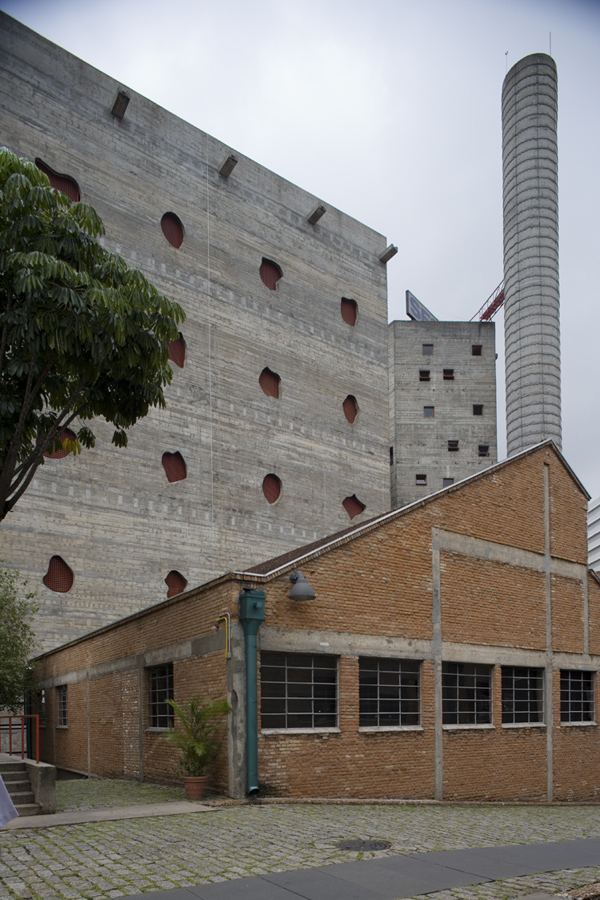 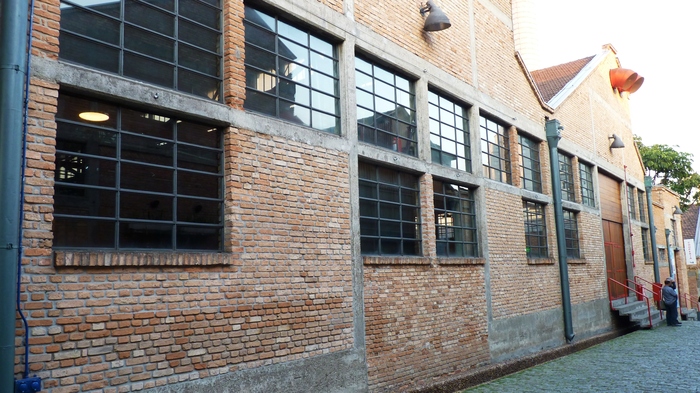 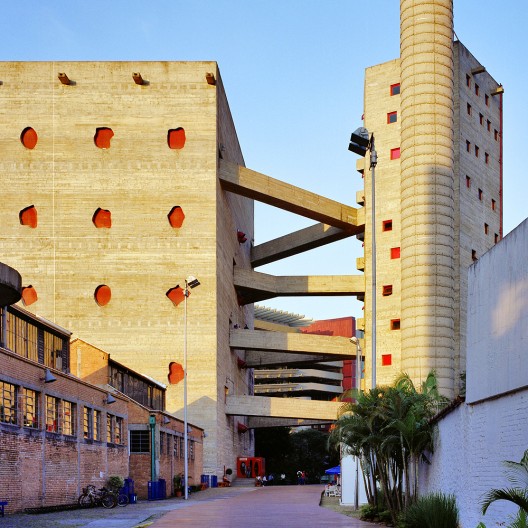 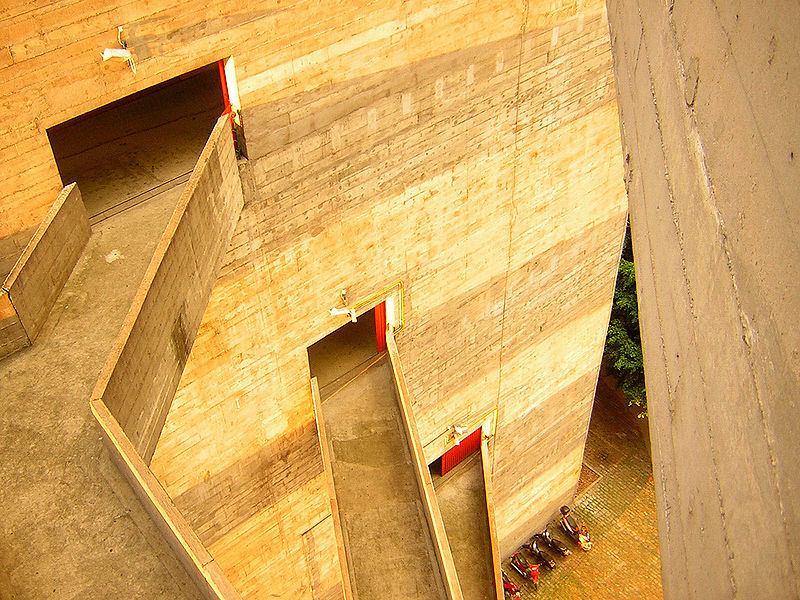 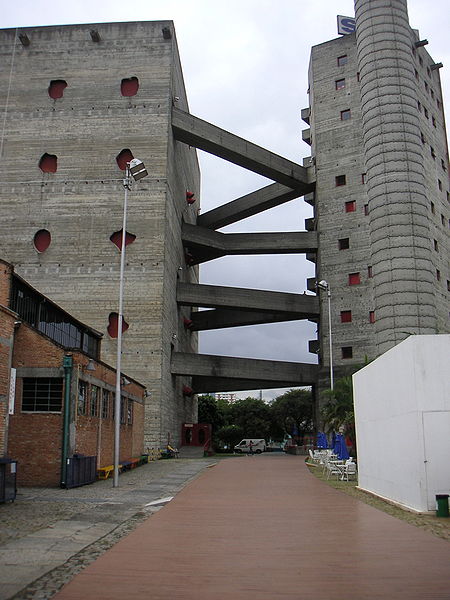 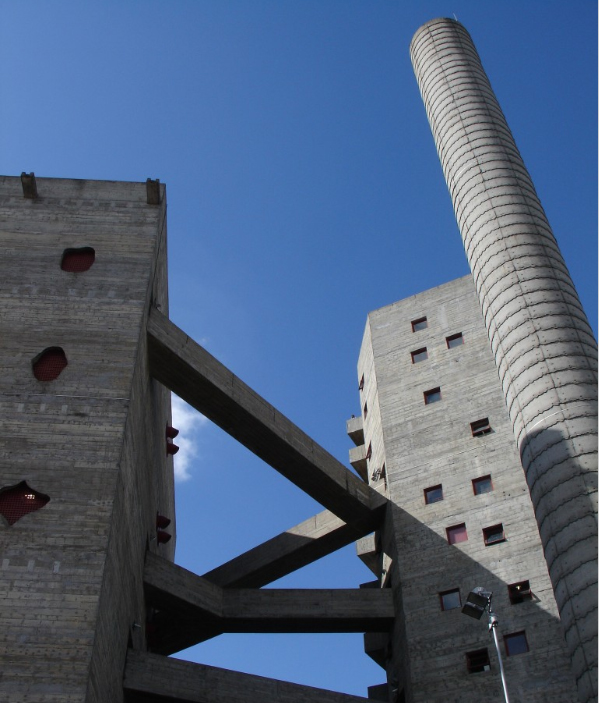 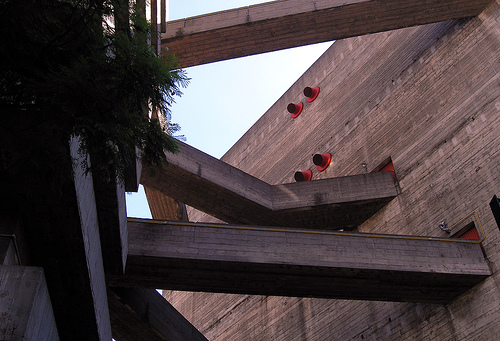 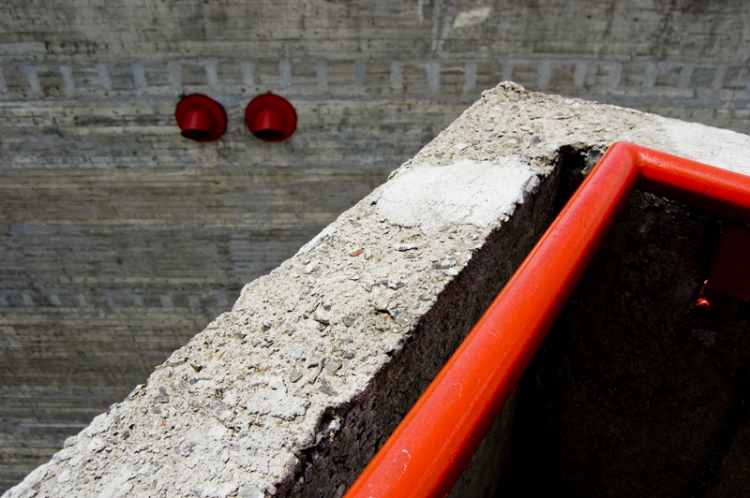 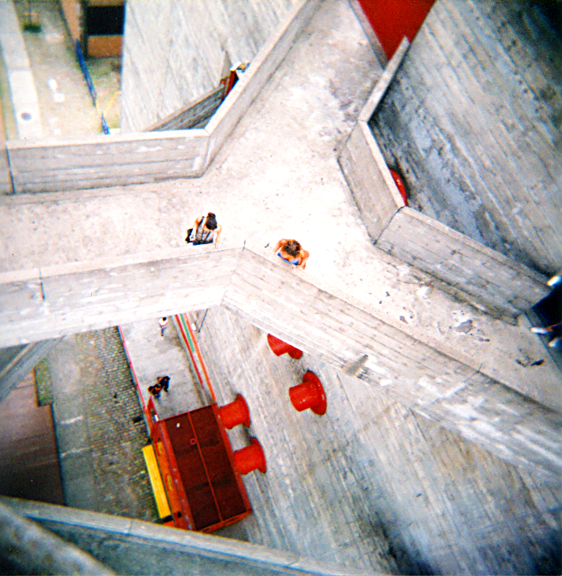 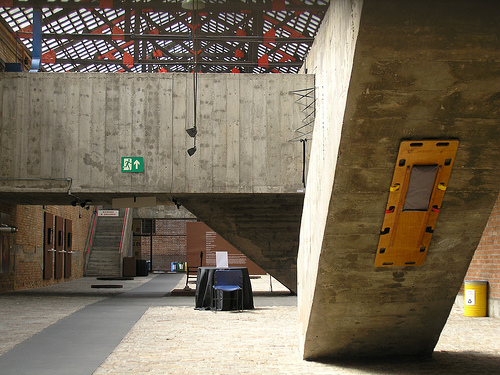 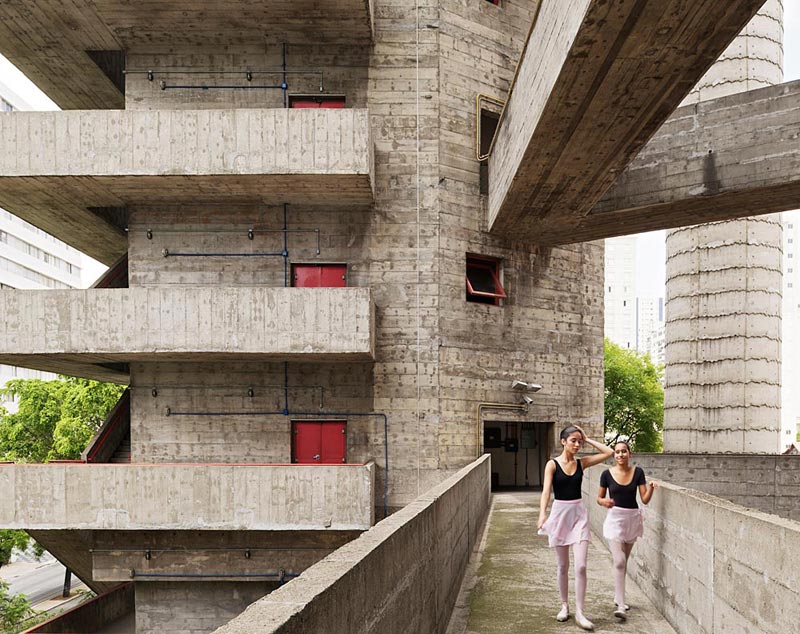 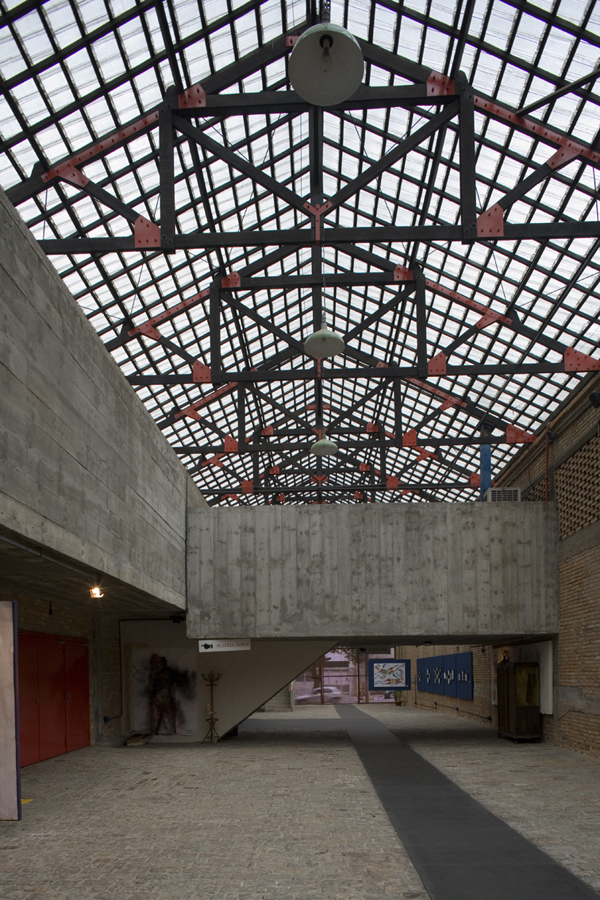 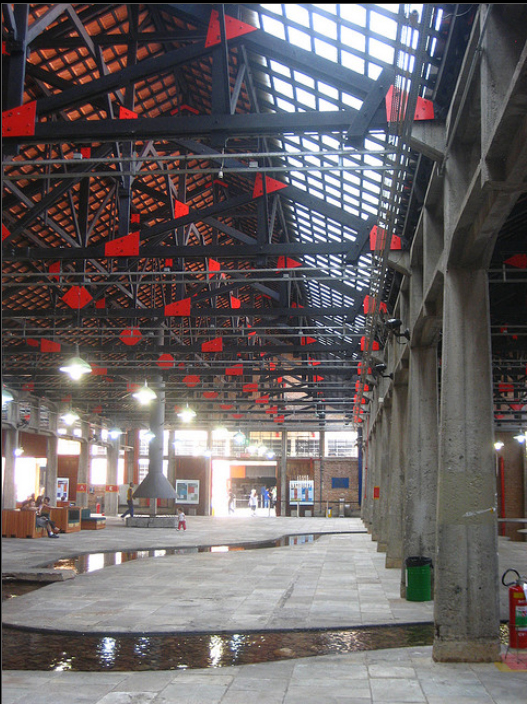 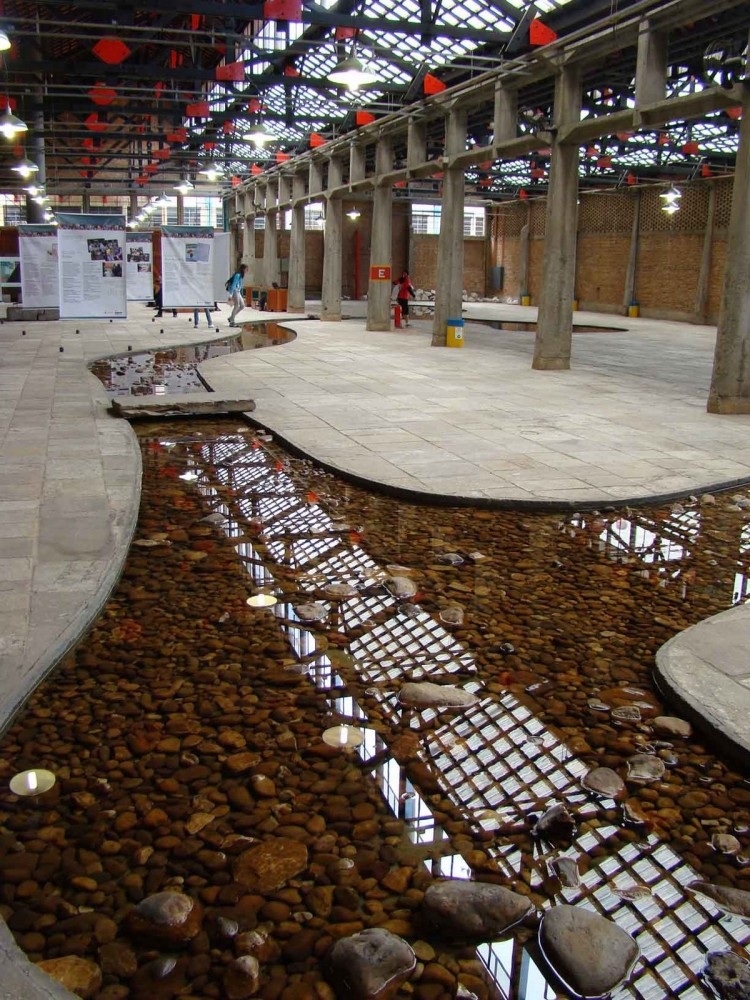 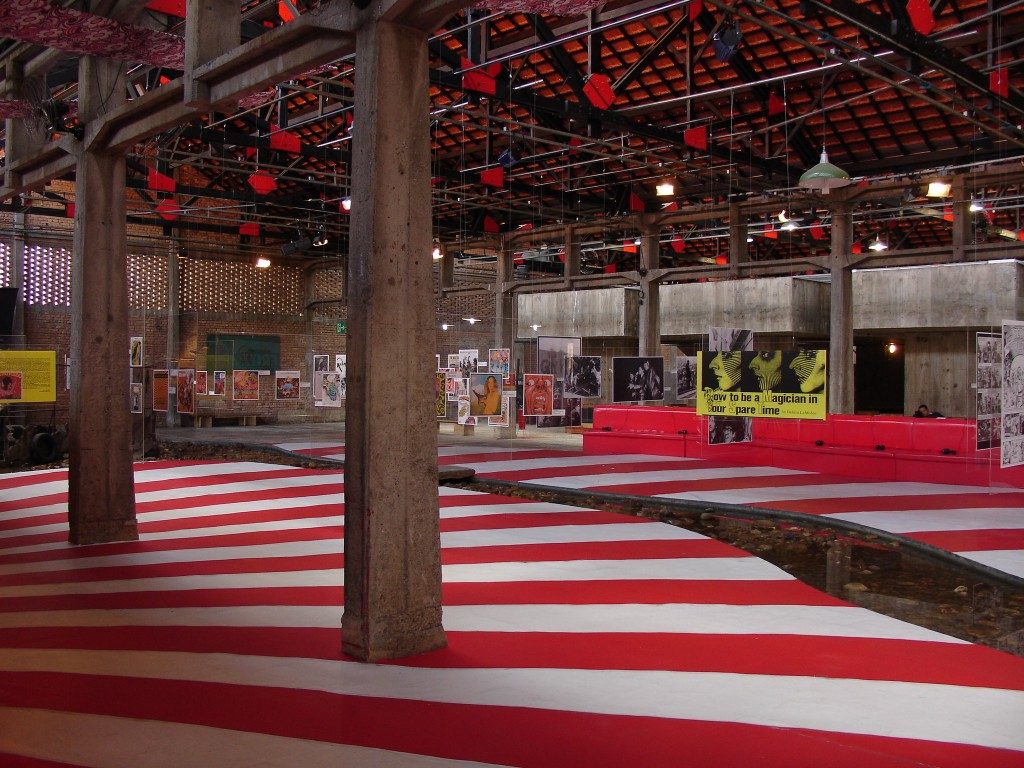 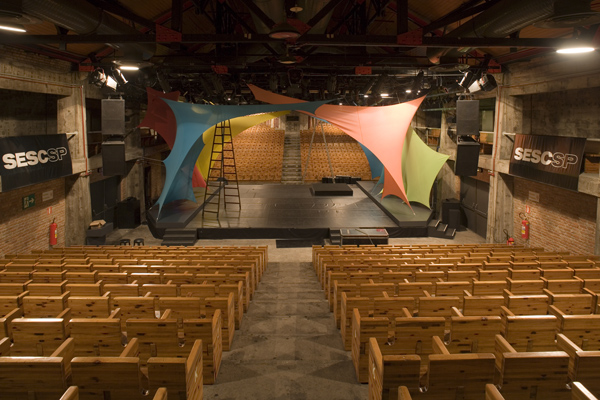 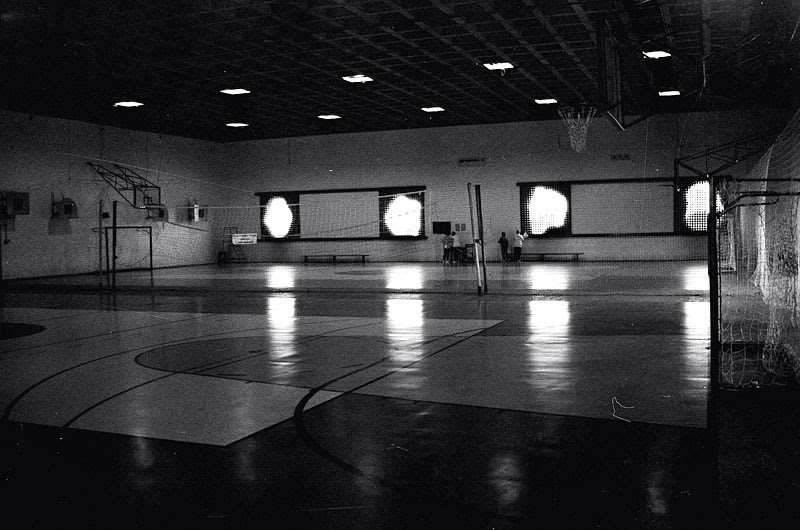 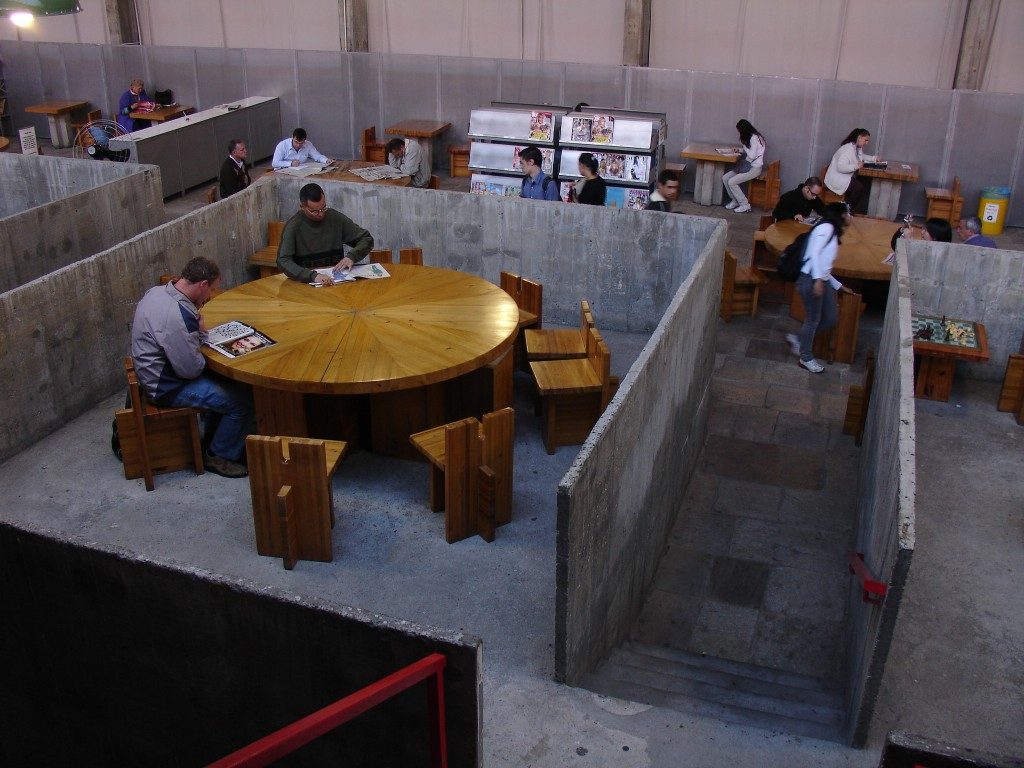 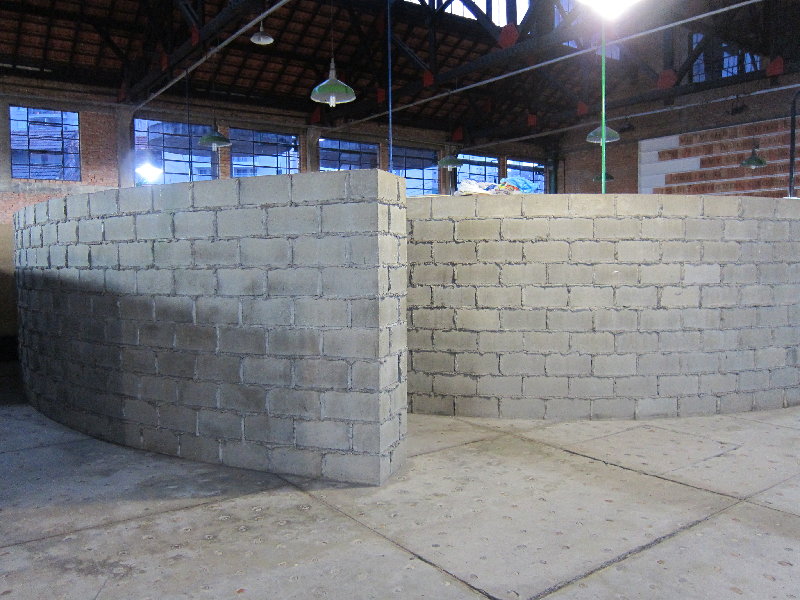