The building of the Art Museum of Sao Paulo known as MASP is one of the major works of modern architecture in Brazil, one of the icons of the renewal of the city. It was designed by the Italian architect, nationalized Brazilian, Lina Bo Bardi, in 1958, being his most important work.

Initially, the MASP worked on the second floor of the building of the newspapers associated with an approximate area of ​​1000 square meters, opened on October 2, 1947. However, the architect conceived from the beginning, the need for its own headquarters.

The proposal was to hold regular exhibitions, promote educational aspects of art contests and conferences and also open schools on topics not widely used. Bardi wanted to create a “living museum” and found in Brazil the perfect setting for your goal.

Promoted by the Municipality of Sao Paulo, the building was erected on the site of the former Belvedere Trianon on Avenida Paulista. The land had been donated to the Mayor by the engineer Joaquín Eugenio de Lima, builder of the Avenida Paulista and forerunner of modern urbanism in Brazil. The donation was made with the express commitment not to build on it a work detrimental to the amplitude of the skyline. From these premises, the project came to realize that was completed in 1968.

The historic gallery was completed with works by French sculptor Degas, Van Gogh paintings, Velázquez, Renoir, Goya, Titian and Picasso, among other artists, Pietro Maria Bardi bought between 1947 and 1953 in Europe.

Between 1996 and 2001, the administration of the Museum undertook an extensive and controversial reform. Many architects noted that reforms des caused the initial project settings.
Since 2003, the building was protected by the Instituto do Patrimonio National Historical and Artistic.

Vantage point is located in the city, the intersection between two overlapping roads, Avenida Paulista and the tunnel of the Avenida 9 de Julho. One side of the field to the street and the other to Parque Trianon, where once stood the Belvedere Trianon. From there you can see the center of the city and the Sierra de Cantareira.

The building is designed as a container for art to be culturally revitalize the area where it is implanted. With a simple architecture, immediately communicates what in the past was called monumental, urging the sense of the collective, the ‘civic pride’.

The architect conceived the museum “beyond the limits”. The project is realized as a large volume suspended leaving open floor plan, supported on four pillars entwined by two giant beams. With concrete structural elements and container glazing, recalls the architecture of Mies Van der Rohe. Additionally, a buried volume takes the difference in level between the two avenues.

By adopting this party, respected the condition imposed by the donor of the land. The elevation of the building on the sidewalk, allowing passersby go below this, without interruption in the same.

The high volume is suspended eight meters above the ground. With a total length of 74 meters between supports, the work was the largest plant in the world in their free time.

The cover is a large square base. In the basement is a large civic hall meetings hosted public and political theater – auditorium and a small auditorium with cinema.

In the suspended volume houses the gallery with their desks, temporary exhibitions, showrooms particular, one library, film library and video library.

To display the paintings, the architect used tempered glass sheet supported by a base block imitating concrete. This recalled the position of the table on the artist’s easel. Currently, these bases are not used.

The void is the place dry and the building lobby plays a key role in the project. This articulates both sides of the building with the city: first the Paulista Avenue buildings which is the same level that the gap dimension, and on the other hand, the space opens up dimensions stepped inside the tunnel from Avenida 9 de Julio. The vacuum gives the project an air space and shadow among the tall buildings of the city.

The idea of ​​vacuum, air, is related to the route of exposure in the museum and also expresses a concept of time, where the viewer is dominant and manages the space and not the reverse. The large open space, both exterior and interior is managed by the visitor, without being forced to take one direction or another but moves freely. The individual is the key, is endorsing the space the way you want to take it.

An outdoor staircase and a lift in steel and glass allow communication levels. The ladder represents both the passage from past to future, the idea of ​​time as a way of articulating the space, a meeting place between the outside and inside. At one end of the vacuum, picks up visitors acting as a magnet, prepares and makes up slowly and deliberately through this staircase landing, a human scale within a disproportionate scale vacuum.

All facilities, including air conditioning were left in sight.

The Belvedere was transformed into a place with plants and flowers around, and floor boxes that recall Iberian-Brazilian tradition.

With the 2001 reform, was made a general waterproofing. The beams were painted red which marked even its structure, which saves 70 meters of light in its longitudinal direction. Also, there was a change in the original floor, which had been chosen initially by the architect Lina Bo Bardi, and the installation of a second elevator, the building of a third basement and replacing the mirrors of water gardens.

Concrete was used, tempered glass and plastic walls. Floors are black rubber industrial type throughout the work except in the civic hall where goiás coated with stone, 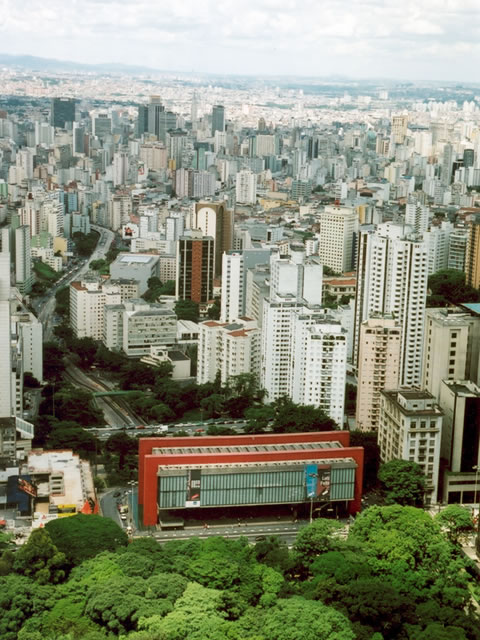 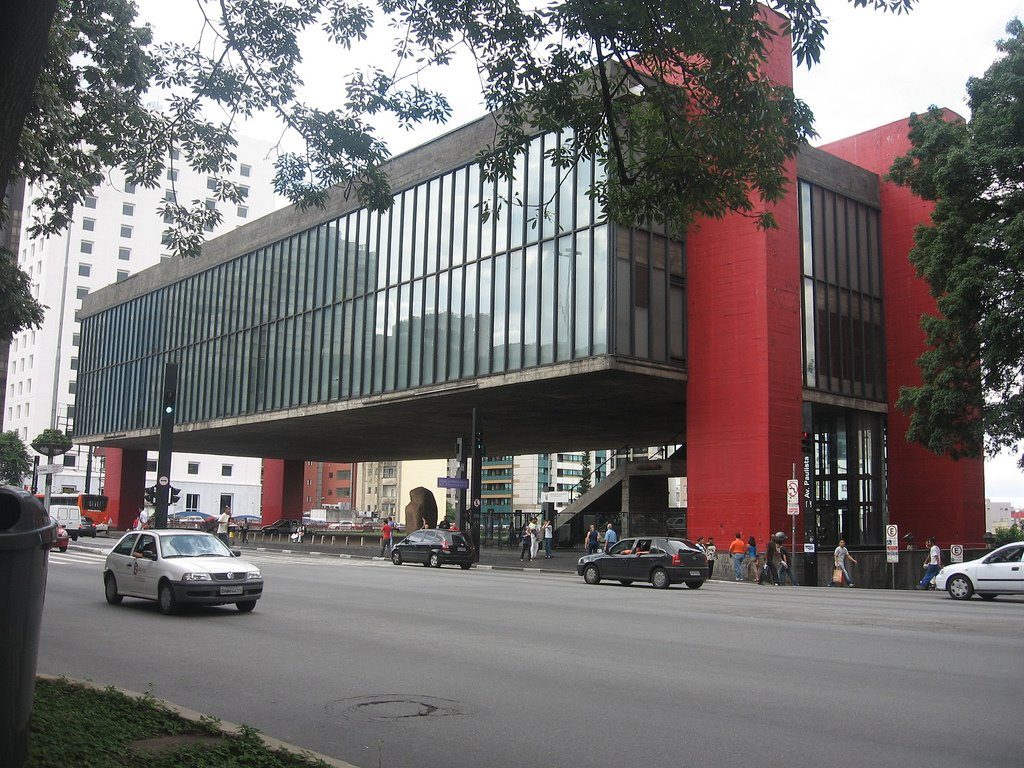 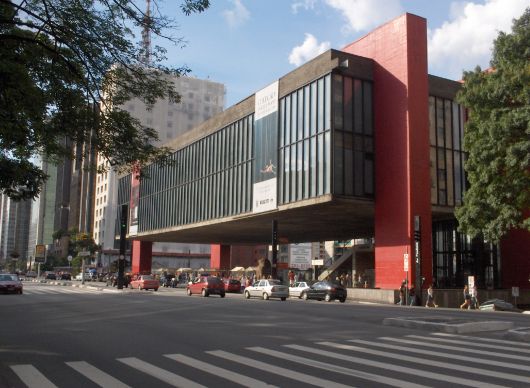 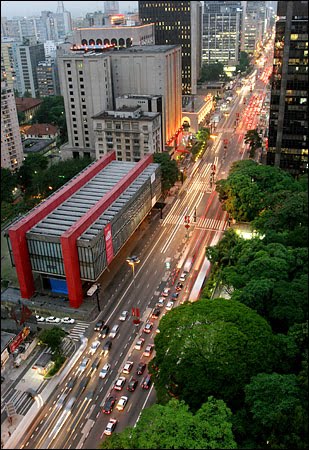 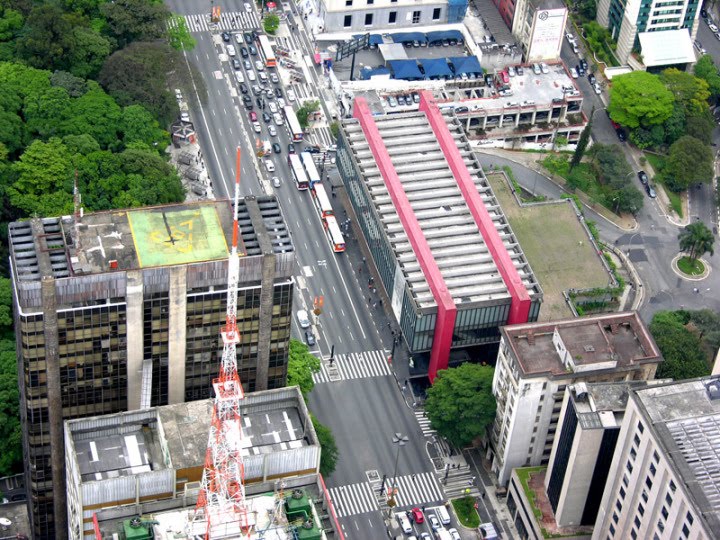 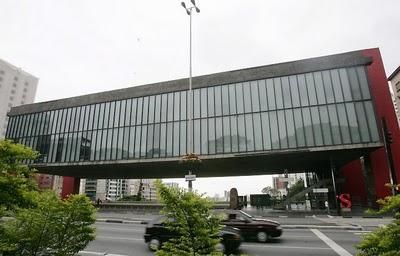 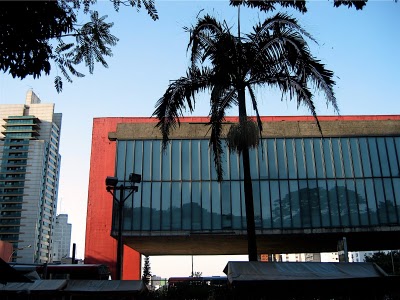 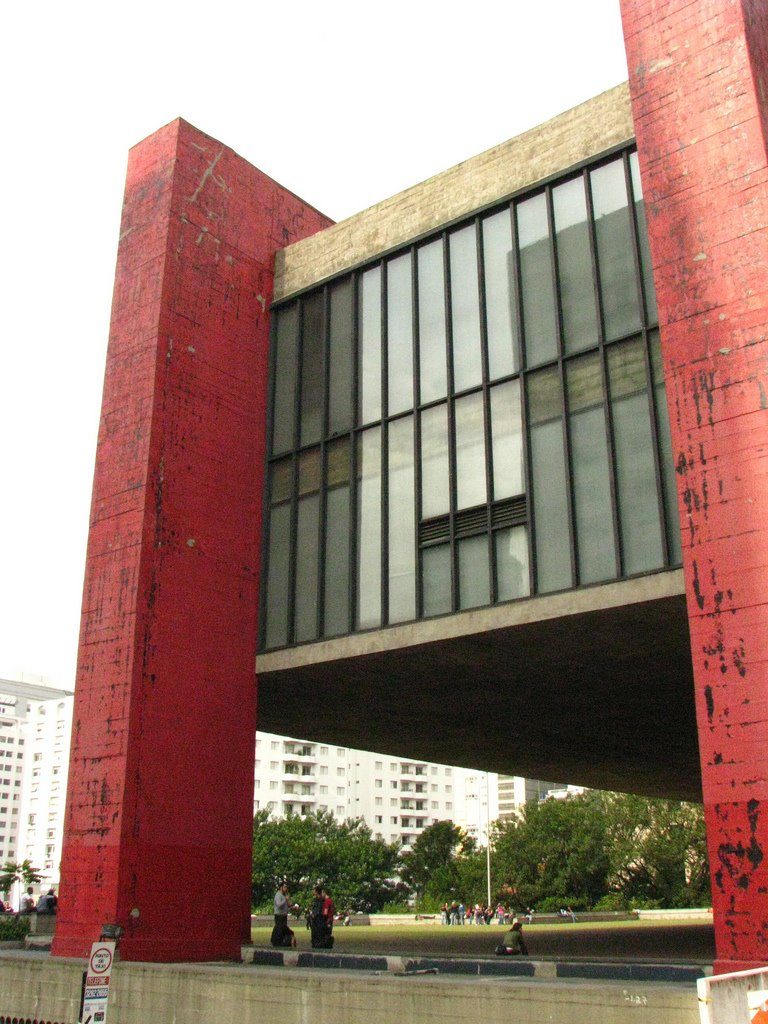 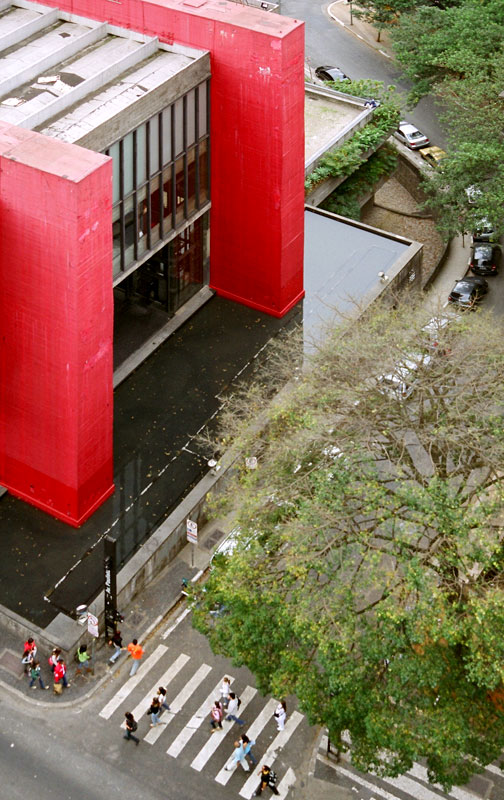 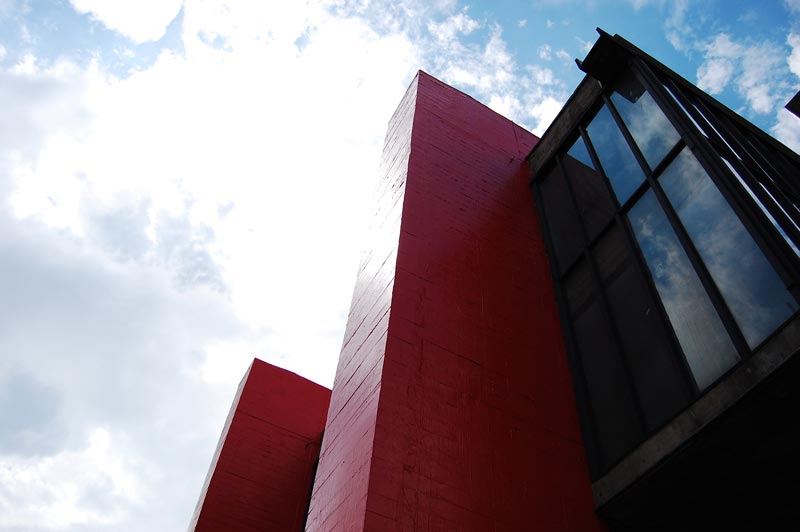 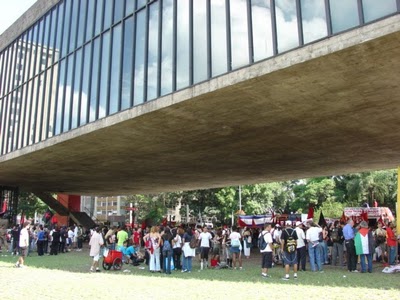 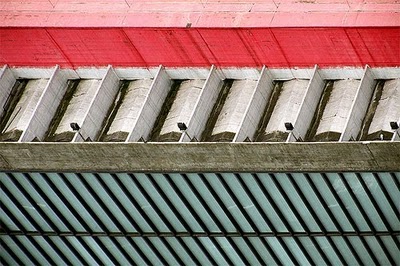 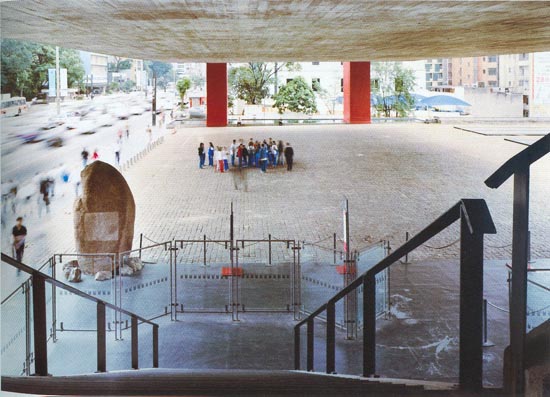 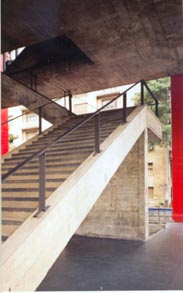 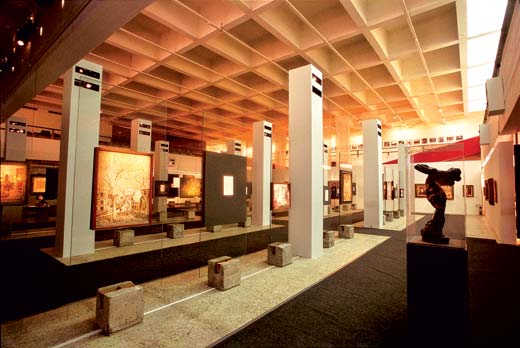 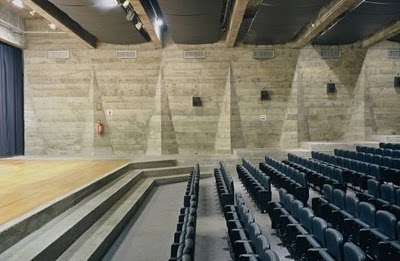