The new milestone Santiago Calatrava in Dublin reminds the Bridge “La Mujer” that the architect in Buenos Aires, the latter in tribute to the work of women in society, and drawing a Bechett Samuel Celtic harp, the most prominent symbol of Irish culture, pays homage to Dublin and its people.

“When I design a bridge, avant-garde attempt to make it appear that clearly belongs to this,” said Calatrava.

Join the south bank of the River Liffey in central Dublin, with the north, within the framework of a program directed to retrieve the port area known as “The Springs” (Dublin Docklands), near Macken Street.

The central axis of the bridge is lined with Guild Street on the north side of the river Liffey and cross the river at right angles to connect to the dock Sir John Rogerson’s in a place about 70 meters west of Cardiff Lane.

The bridge is inspired by traditional Irish harp. The harp is a true symbol of Ireland in its design so the cables are reminiscent of the strings and so the bridge is a mixture of symbolism and modernity. Calatrava Bridge was named for Samuel Beckett, Nobel Prize for Literature in 1969.

It is the second signature bridge in the Irish capital, after James Joyce. Calatrava thought I could be a second bridge to honor the symbol of the country: the Celtic harp. Explains: “I developed a deep affinity for the people of Dublin, and I wanted my next bridge hold that connection. I keep my sincere hope that the Samuel Beckett Bridge will serve as a monument to Dublin, honoring its past, present and future.

The multimodal platform that can rotate 90 degrees by a rotation mechanism located at the base of the tower to allow river traffic, including four lanes for cars, two in each direction of travel, two lanes for pedestrians and cyclists and a space for future tram.

It measures approximately 29 meters from the south pier and its rear compartment were placed steel and concrete blocks as a counterweight.

The central support in the river consists of 18 batteries of 1.2 m in diameter that supports the pile caps. A concrete circular support whose diameter varies, houses the hydraulic swing and hoisting equipment, as well as horizontal and vertical supports that support the bridge as it spins. The locking bolts at each end of the bridge, moved by hydraulic cylinders in the north and south abutments, allowing the bridge open to traffic.

It is a cable-stayed bridge, whose main structure consists of 25 straps front and 6 rear, with a runway of 124 meters long, 27 meters wide and a single pylon 40 feet tall. The cross section of the board is a box girder with cantilever ribs on each side that can accommodate four lanes of traffic. Its total weight is 5700 tonnes.

Samuel Beckett is a cable-stayed bridge

The structure was trasladade from Rotterdam by barge

Construction started in Rotterdam in May 2007 and consisted of the union of eight steel sections to form the platform of 124 meters joined by straps and the mast. This structure was moved 628 miles by barge from the Netherlands steelworks. The weeklong journey through the English Channel and the Irish Sea. On arrival, the structure was secured in a reinforced pier built on the river Liffey and abutments located behind the walls of the existing piers.

It took three attempts to achieve it in place, then complete the foundation work and the central support.

The main materials used in its construction have been the steel and concrete.

The mast was built in steel curved, like the eight sections that form the gateway and the 31 cables that connect the board with the mast. The 25 cables front cord 60 mm are closed and six rear cord also closed 145 mm.

Reinforced concrete was used for counterweights, for supports of the hydraulic systems and also in the 18 cells that support the pile caps.

Finishes used in asphalt, and granite white paint in areas that link the bridge to the docks. 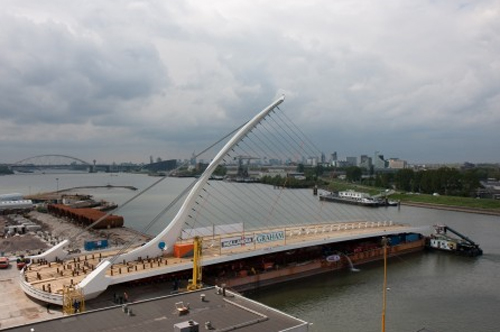 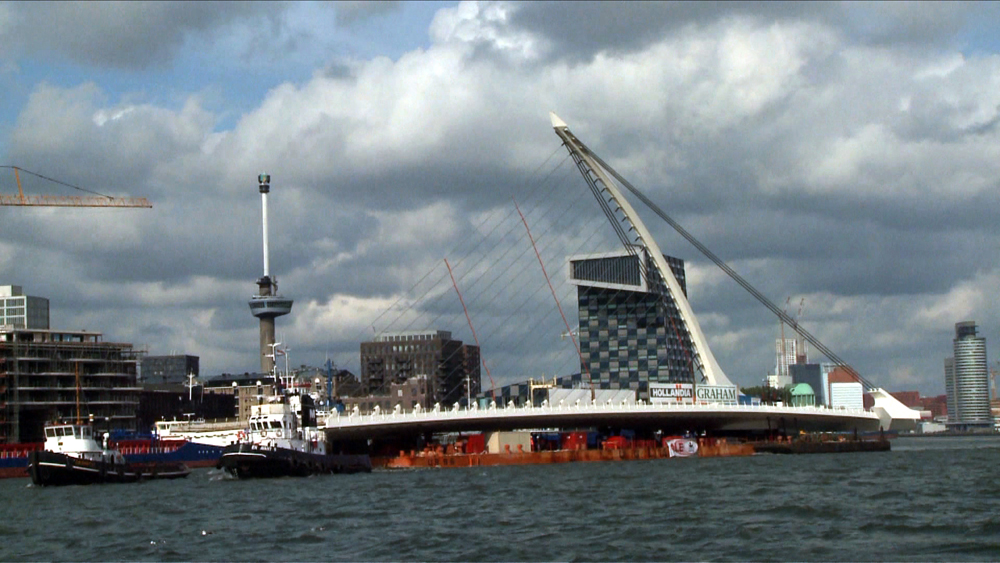 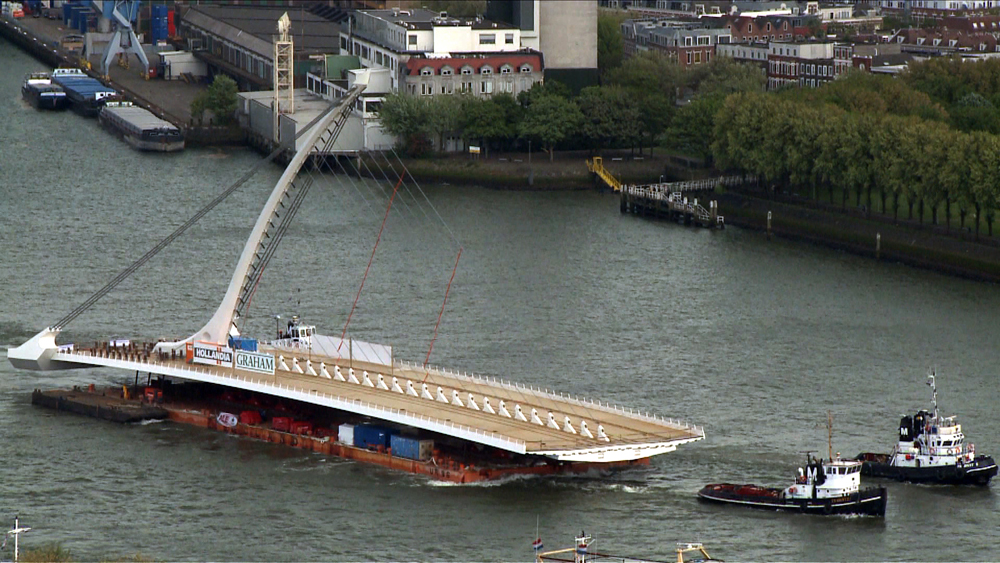 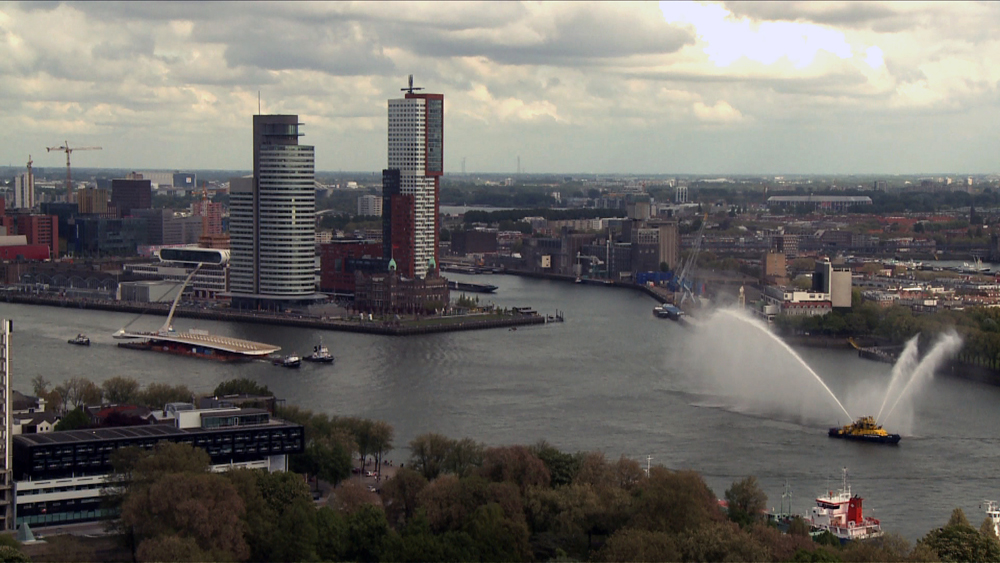 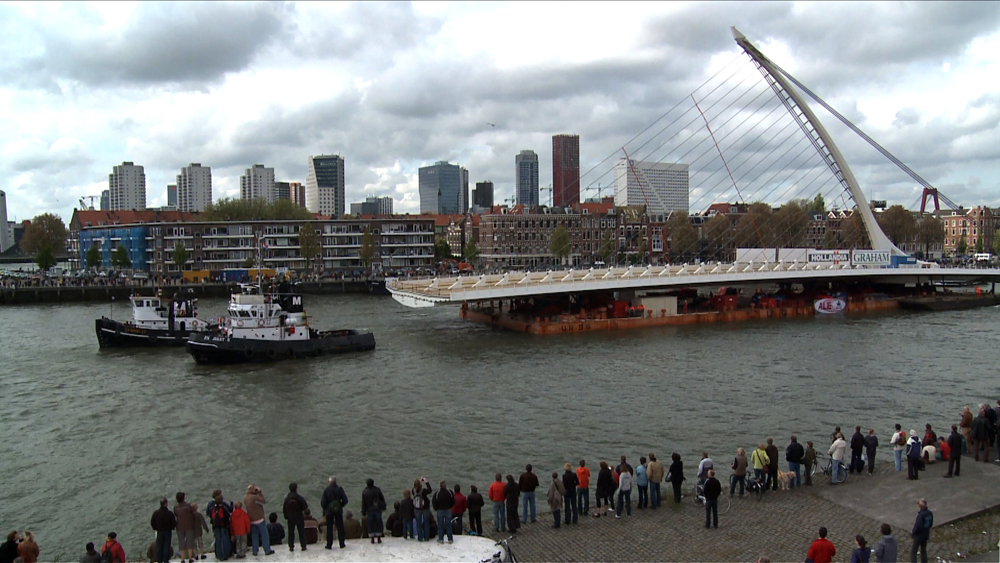 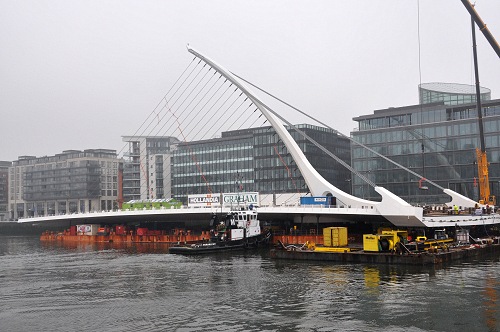 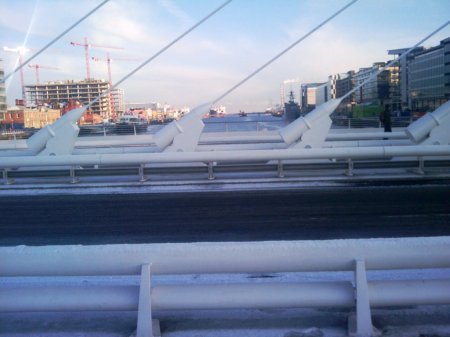 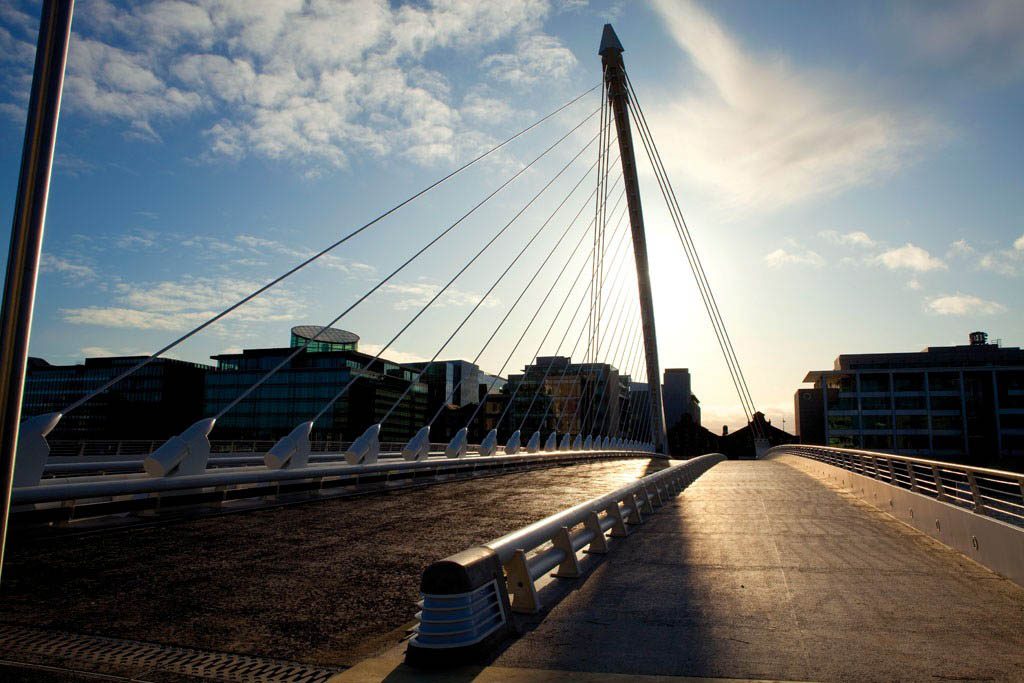 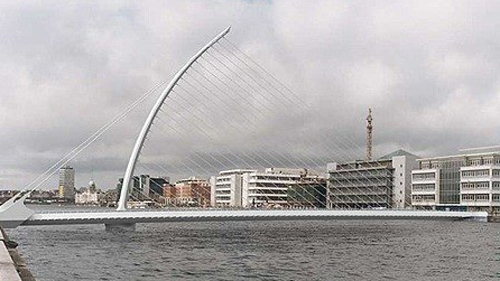 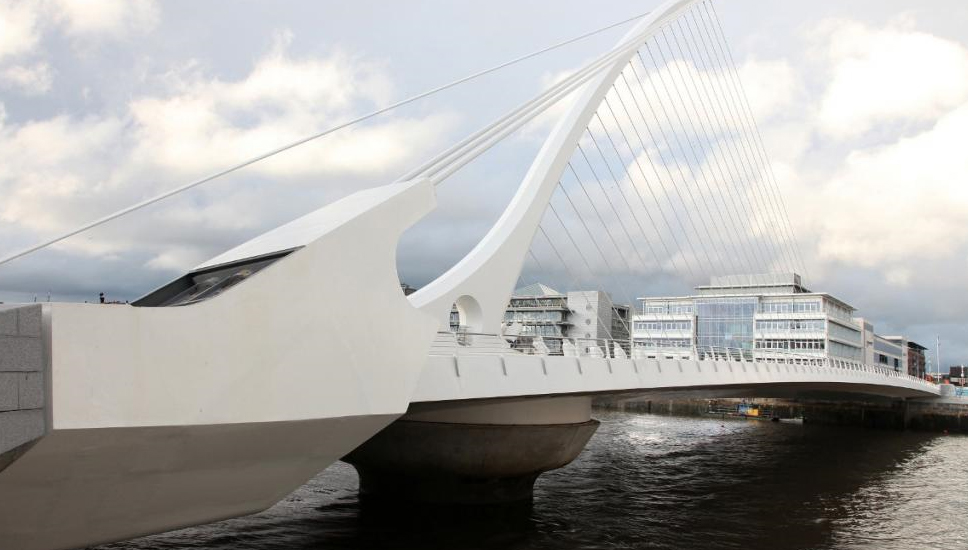 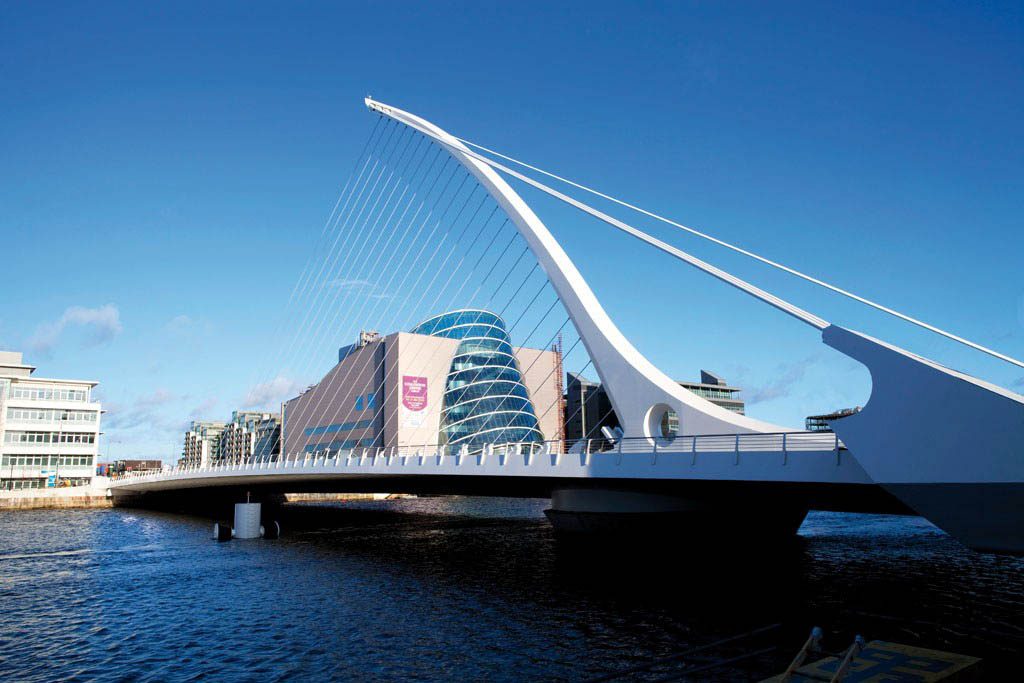 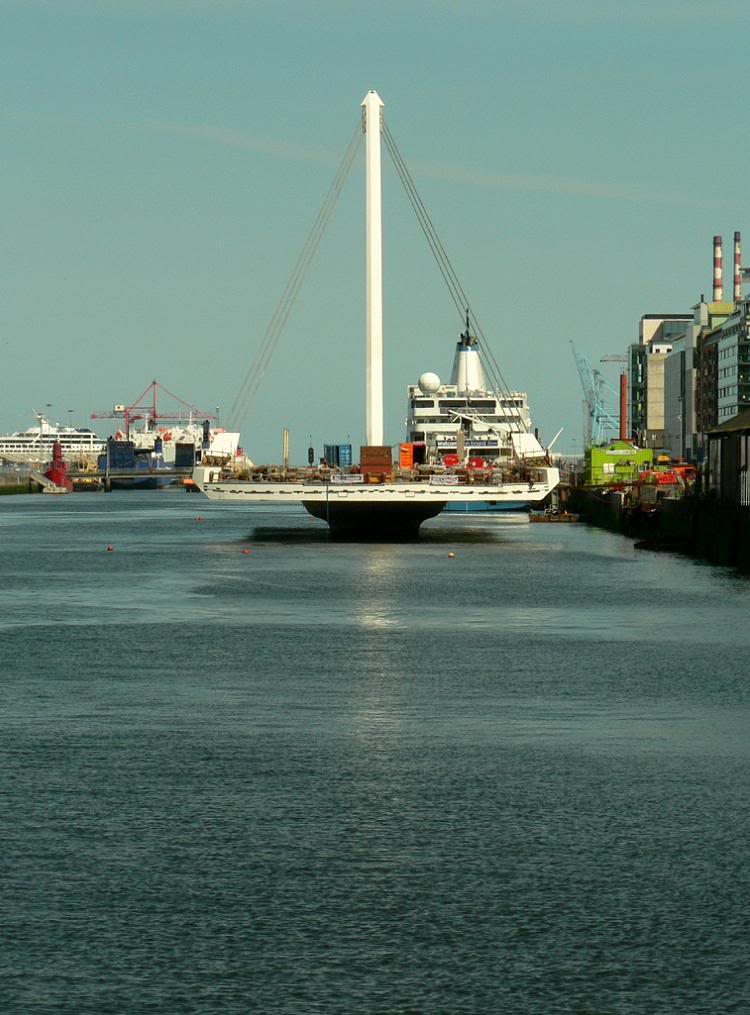 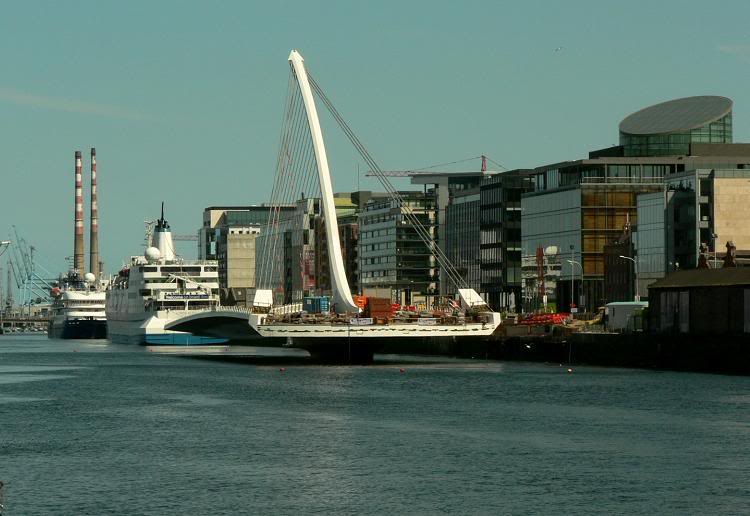 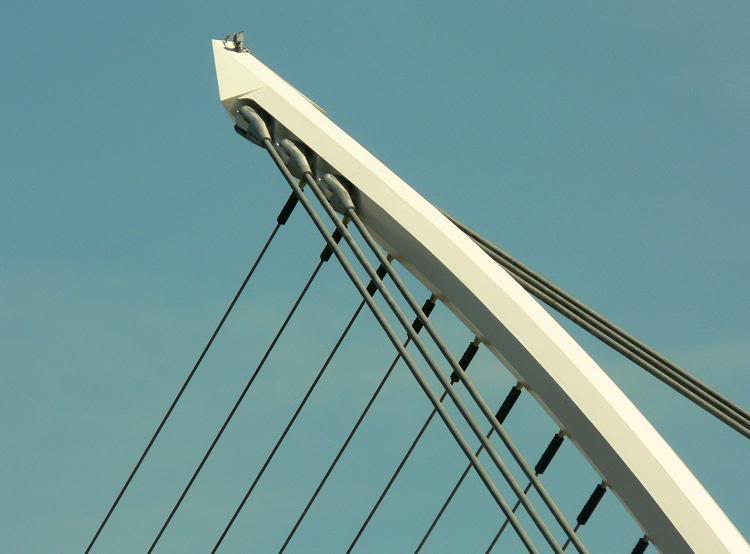 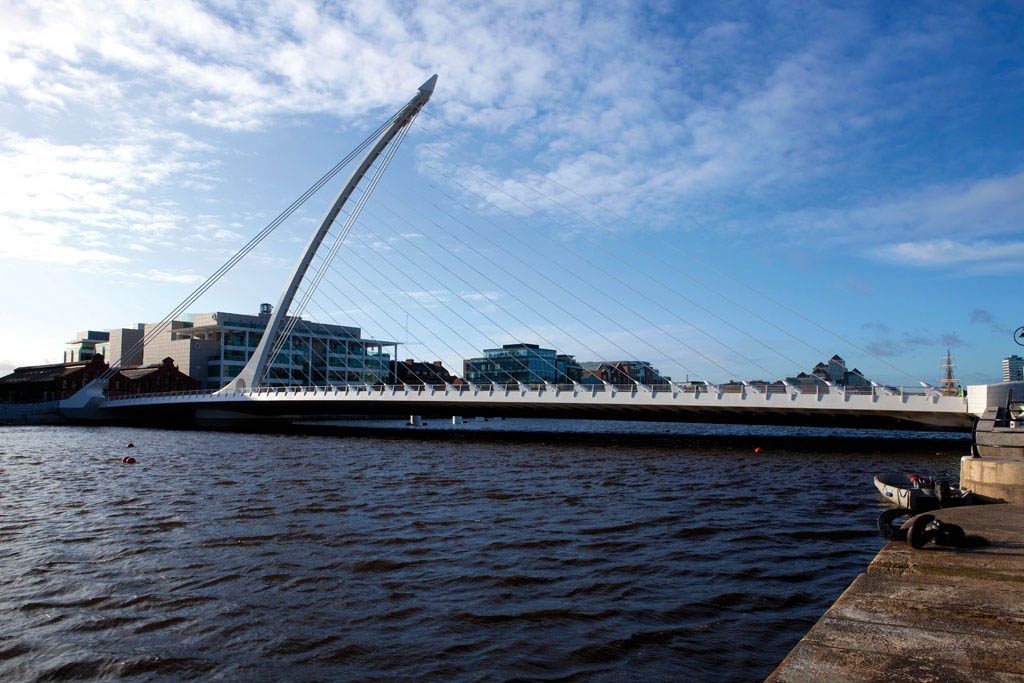 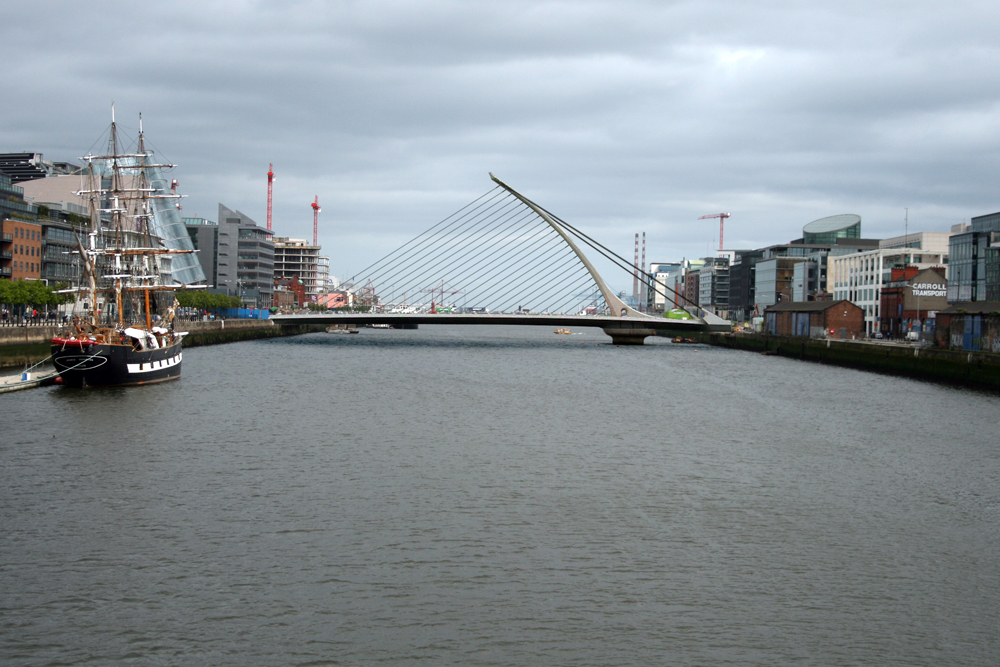