El Puente de la Mujer is a work of Spanish architect Santiago Calatrava in Buenos Aires, Argentina. It is the only one of his works in Latin America.

The cost of the work was about six million dollars that were donated by Alberto Gonzalez, who was a member of the Group and Madero was opened December 20, 2001, at the peak of the economic and institutional crisis argentina. That is why its opening went unnoticed for most of Buenos Aires.

It is located at Dock 3 in Puerto Madero, on the streets and Manuela Dealessi Pierina Gorriti.

His name is closely related to the area, since all the streets of Puerto Madero are named after famous women in a clear tribute that highlights the work of women in society.

The Bridge is a pedestrian element of communication that saves the separation between the Dock 3 in Puerto Madero, from Avenida Alicia Moreau de Justo, the commercial area to the east. Therefore presents an east-west orientation.

In its closed position, the hair is oriented toward the West, ranging south in its position of maximum aperture board.

The design is a synthesis of the image of a couple dancing tango.

Man, the architect, the tower and associated with women, drawn in a horizontal manner, as a partner while dancing tango.

And like most of the works are pure Calatrava structure here reflects the concept not only forms but also in the system that supports it.
So the man of the pair represents the vertically inclined arm, while the woman is represented by the horizontal board, supported by man through a series of wires that represent the arms of the man.
With all that one can almost see the couple ending their dance, the classic moment when the woman is dropped and the man leans over her to bear all its weight to push again moments later toward the vertical.

It is a pedestrian bridge, 160 m long and 6.20 m (5mts free) wide split into three sections: two fixed on both sides of a dam and that rotates on a mobile pylon cone of white concrete and allows less two minutes of the passing vessels. This central section is supported by a steel needle with the soul of cement of about 39 m in height. The needle is ready to hang it diagonally, like a suspension bridge, the cables that support the stretch turn.

It weighs 800 tons. Has two fixed lateral sections 25 and 32.50 m and a central section and hung revolving 102.50 m. To operate the twist it has a computer system located east of the bridge.

The inclined Pilon, a 34 m high with an angle of 39 degrees, it prints an original profile, and supports both the horizontal braces and the board.

The pedestrian bridge from Dock 3, forms a kind of bridge atirantado. In parallel, thanks to its system of rotation, allowing the shipping dock.

The width of the pedestrian bridge is 5 meters of free passage, and the central gauge is respected through a rotation mechanism that allows rotation of the central section of approximately 100 meters at an angle of 90 °.

The distance to save is reduced by two approach bridges, located on both sides of the dam, working as the centerpiece atirantado bridge and rotary. Through a concrete filler at the rear of the bridge, a structural balance between this area and the stretch atirantado, simplifying significantly the rotation mechanism.

center stack which is located inside the mechanisms of rotation

Rotating the legs resting on a pile of white concrete central 9.40 meters in height, within which lie the mechanisms of rotation, forming an inverted truncated cone shape of revolution, with a horizontal surface with listellos 7 inches tall supported directly on a head 10 x 10 x 2 meters. It receives the steering head deep, composed of 8 pilot spot of 1.20 meters in diameter and 26 deep.

Both batteries have a lateral section of variable geometry formed by a ruled surface generated by a circle of 160 cm in diameter at its base and an ellipse at its head. Were executed in white concrete, with the same solutions in terms of aesthetic listellos the central stack. Each grounded through a triangular head and three piles of 1 meter in diameter and 26 deep.

The space between the lower level of the heads and the height of the terrain was filled with a concrete cap submerged.

The batteries have an elevation of the bridge needed for the remaining half of the board in the longitudinal direction on both sides of the inflection point, is 4.5%.

This element was projected straight guideline plant, capable of a light bridge between abutments of 160 meters and a maximum height above the level of ± 0.00 to 19.50 meters, which appears to be a half from their longitudinal turning the handle up 3.5%, and a cross slope waters of the two 1.5%, to enable optimum drainage of rainwater.

Structurally, the board was like a big metal box-beam cross section in the asymmetric rotating, helping to offset the efforts of the tensile strained.

Fixed at the ends of approach to the revolving bridge, the board is composed of a steel box girder, forming symmetrical with respect to its vertical axis.

With an asymmetric variable section, the Pilon constitutes the key concept for understanding the structural and aesthetic of the bridge.

El Pilon inclined forming an angle of 38.81 ° with respect to the horizontal, and booting from the battery 2 and a total height of 34.00 meters pylons, stands up to the crowning peak of the bridge of 35.00 m on the board.

Structurally, it consists of steel sheets with different thicknesses
internal stiffeners, particularly in the shoulder straps and anchors at its base. Along the shaft of this element, the 19 cables are available in galvanized steel 50 mm in diameter behind the board.

The anchor straps to the board is produced by the metal antepecho North, crossing each 3 meters and with a record at the bottom of each brace for a possible change or retensado of them. At the bottom of the cables is designed protective sheath which is also responsible for establishing the transition between the structure of the board and straps.

Finally, the stirrups are lined with white precast concrete panels from 2 meters in length and between 4 and 6 meters tall, with header bracket listellos horizontal curve and every 27 centimeters. We included conical recesses to accommodate the lighting systems.

The suspenders of the bridge cables are made up of high-strength galvanized steel, of circular cross section and Z-section, showing a nominal diameter of 27/28 mm.

All concrete elements that remain in contact with water, cement was materialized especially resistant to sulfates and sea salt in order to give the structural parts of strength and durability.

Foundations and the three batteries that are of concrete and reinforced white. The footbridge, metal, and its rear end, concrete. The handrails are made of steel.

The beam-drawer panel is made up of steel sheets of different thicknesses, both interior and plates in the longitudinal and transverse stiffeners and the whole of the box girder, which is stagnant in the central area.

El Pilon is formed by steel plates of different thicknesses.

Cables and braces are of high strength galvanized steel complete the picture. 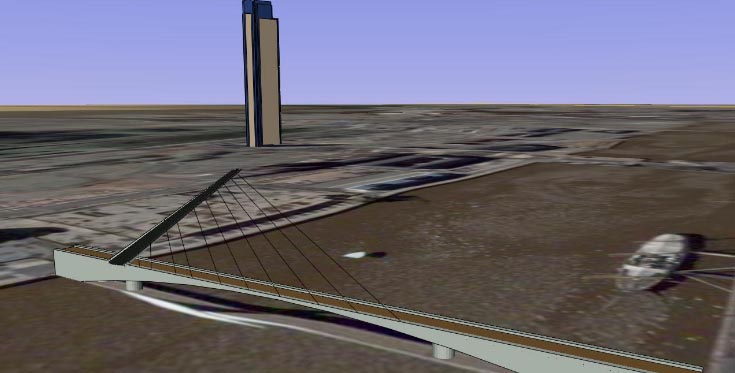 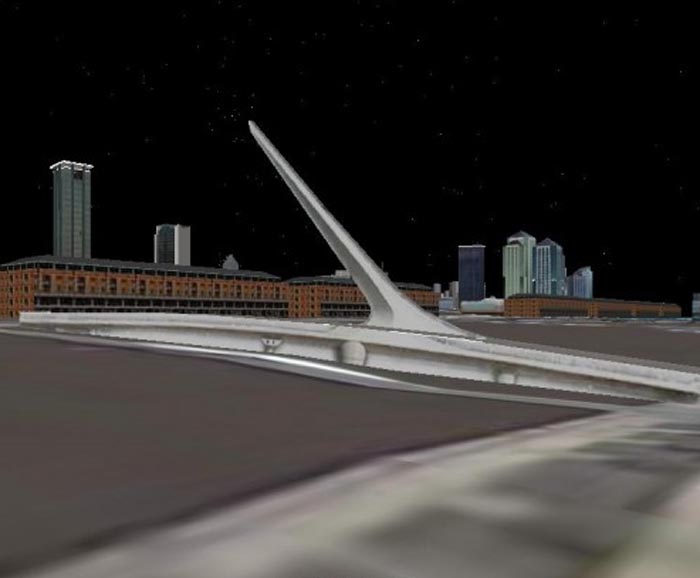 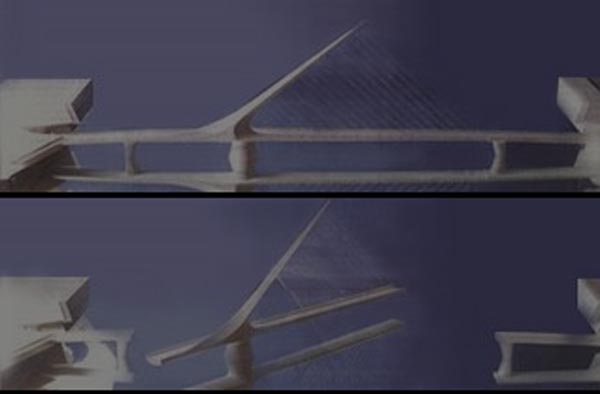 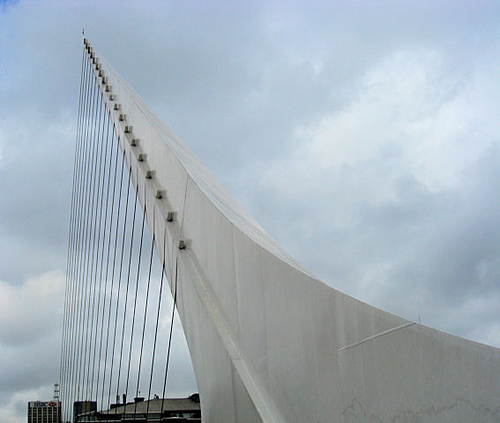 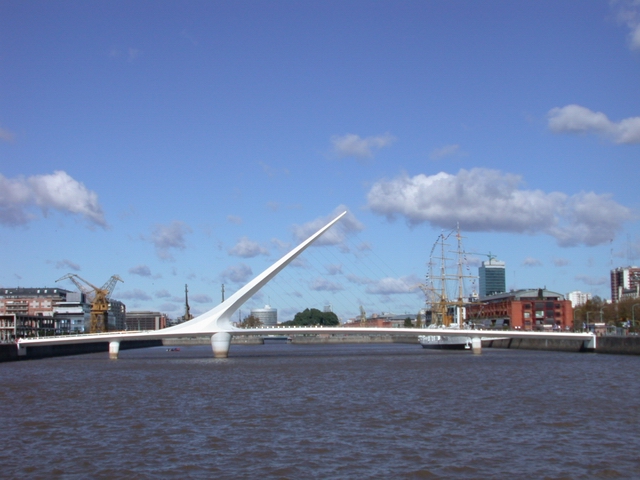 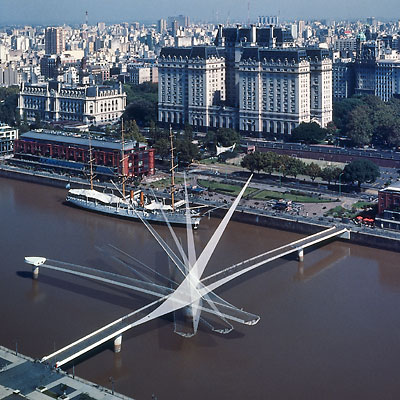 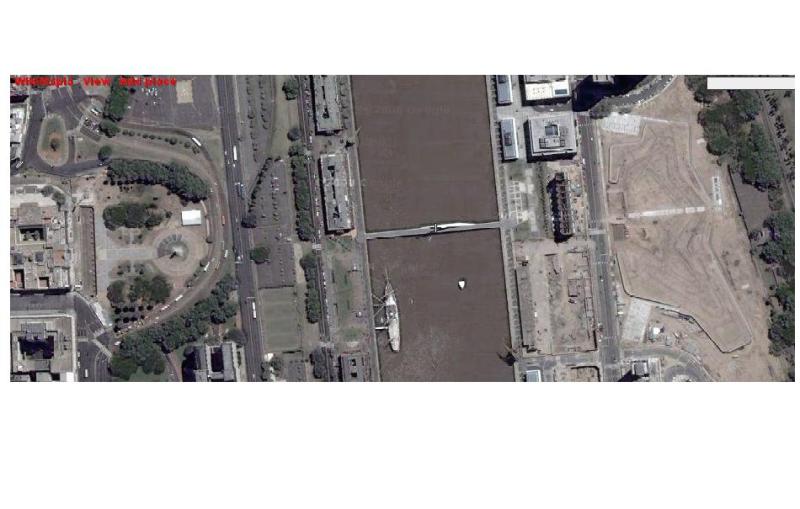 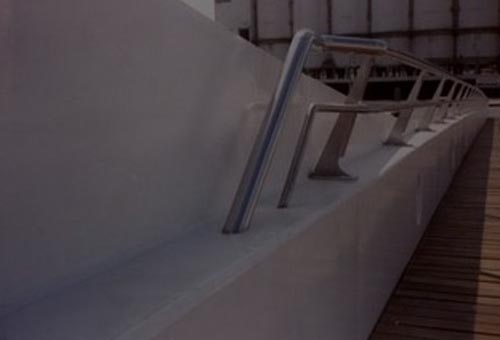 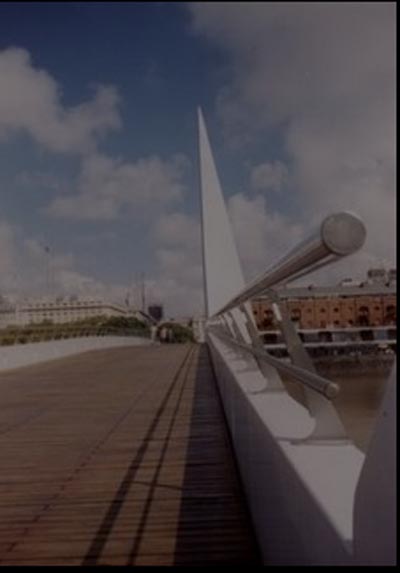 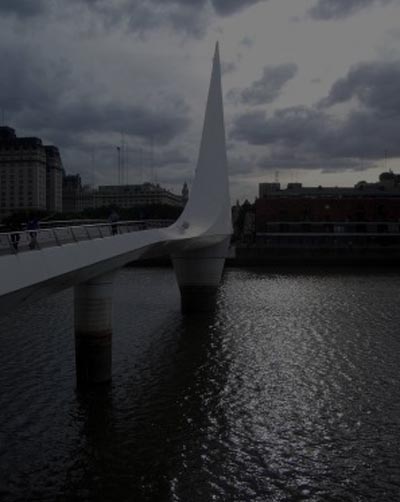 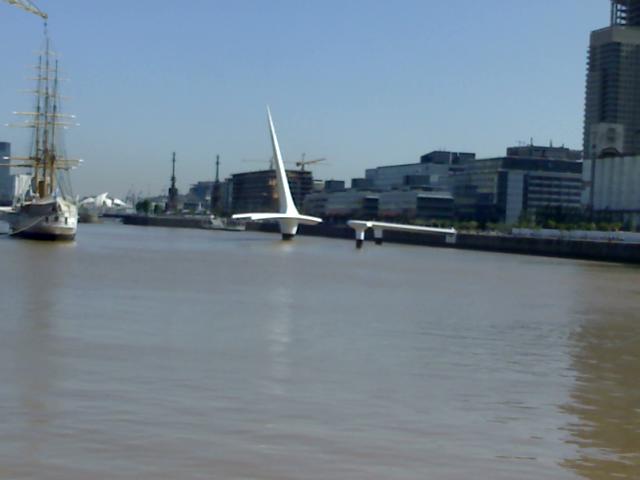 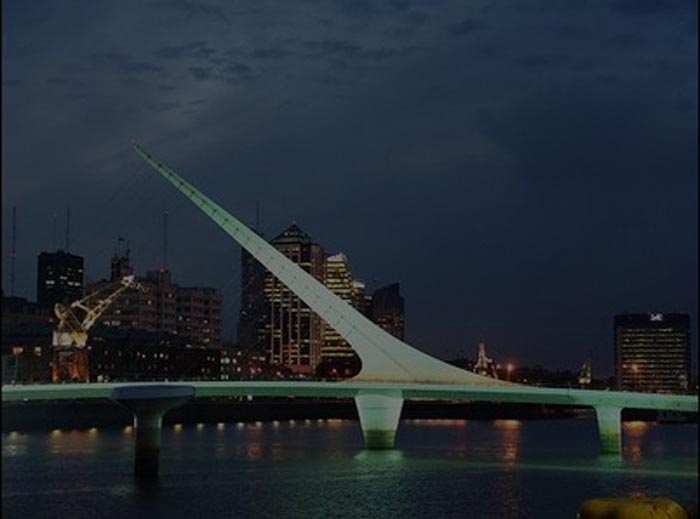 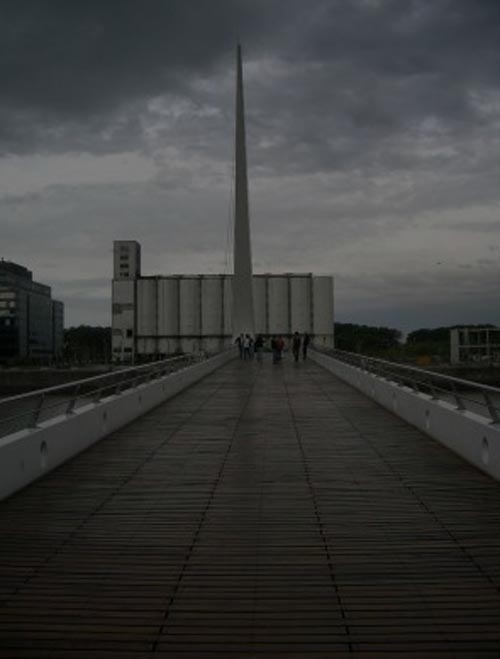 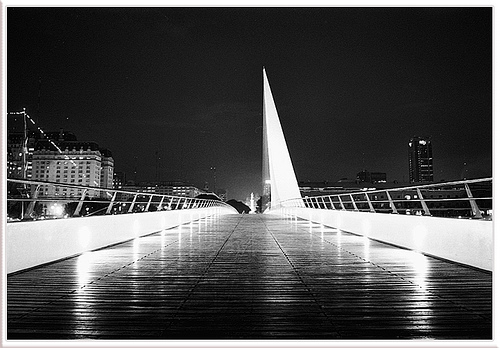 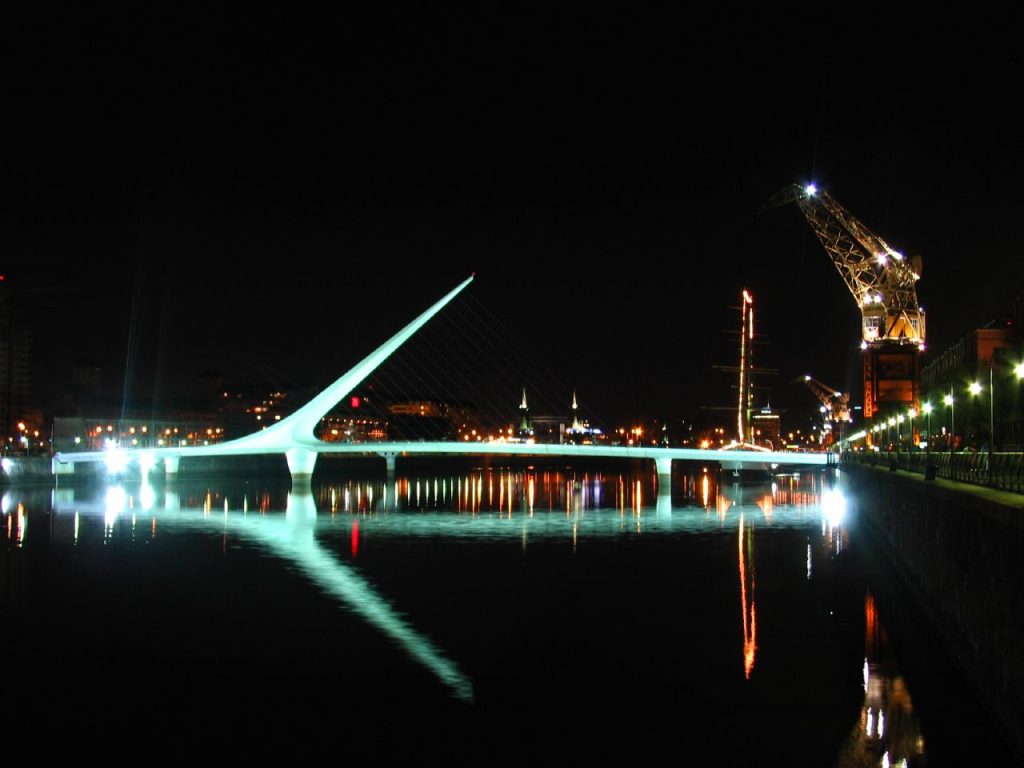 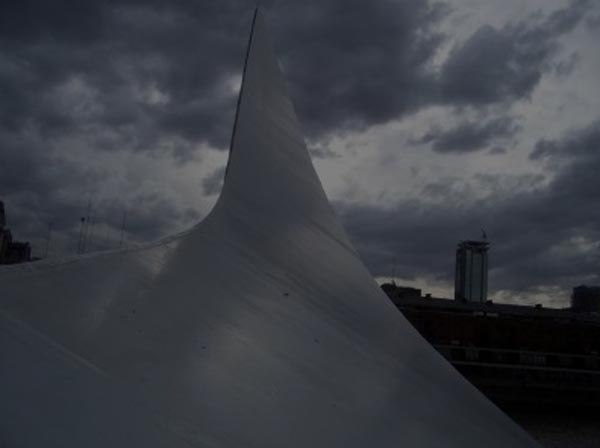 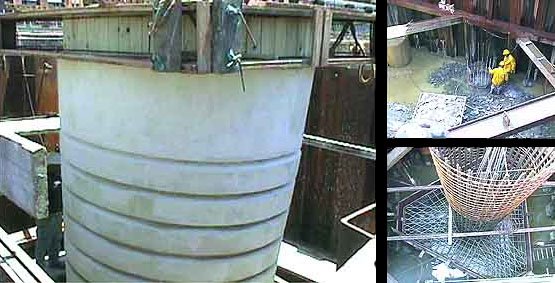 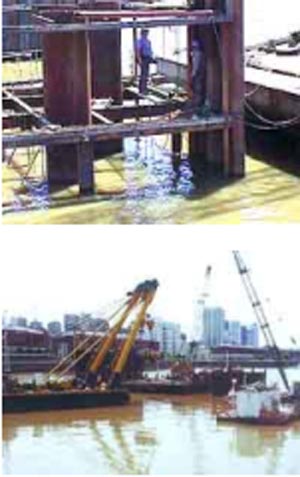 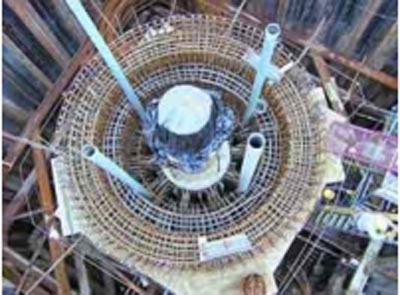 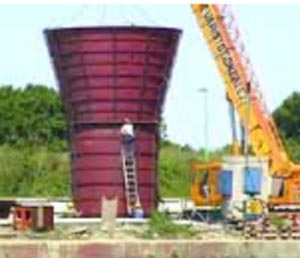 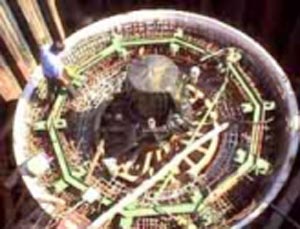