The station has had a total makeover in recent years becoming one of the most emblematic architectural works of the city. For its remodeling, completed in 2014, a team called Team CS was created, consisting of three architecture studios, Benthem Crouwel Architects, MVSA Architects and West 8 in the landscape part. The architects expanded the main station complex and updated the surrounding public spaces to improve the integration of the building into its urban context.

The old station, designed by Sybold van Ravesteyn in 1957 consisted of an independent building in front, a tunnel and open platforms, each with its own canopy. Over the years it had ceased to meet the current needs and requirements of users in terms of capacity and design. For these reasons, the city of Rotterdam and the railroad company needed a new station that would form a single entity for all its users. The design of Team CS certainly meets these requirements. The current station hall crosses from Proveniersplein on the north side to Stationsplein on the south side. The roof of the 250 meter wide platform forms a single entity with the main hall and the tracks.

This public transport terminal is located in the center of Rotterdam, the Netherlands, and integrated into the European network of transport centers created by the arrival of the high-speed rail system (HSL).

The main entrance is on a public square, in Stationsplein 1, and the secondary one looks at the Spoorsingel canal, in the Provenierswijk neighborhood. This area that did not suffer the consequences of the bombing that hit the city on May 14, 1940 maintains its authentic appearance and atmosphere.

The station, with its construction and high-tech details and its numerous public transport options, serves as a catalyst for urban renewal of the city. It is an integral part of the ambitious urban growth plan of the Municipality for the Central District and a new icon at the beginning of the cultural axis of Rotterdam.

The shape of the new building expresses the internal logistics of this transport center. Marking the beginning of the “cultural hub” of Rotterdam, the new Grand Central station points the way to the heart of the city.

Not only does it serve as a modern and efficient traffic hub for about 320,000 daily travelers, but it has also acted as a catalyst for a massive modernization of neighboring districts, because the new building connects them where they were previously separated by the barrier of train tracks.

The idea of ​​symbiosis is also represented inside the building, shops, high-end restaurants and bars offer more offers, ensuring an additional number of visitors and cozy spaces. This is reinforced by the new lobby of the station, whose generous distribution and aesthetics convey the impression of a covered square. Due to its identity-generating architecture and its sophisticated concept of sustainability, the Central Station has in a short period of time become a new landmark of the city of Rotterdam.

An angular canopy clad in metal is projected onto a public square at the entrance of the Rotterdam Central Station. When entering the illuminated esplanade of the station, travelers have an overview and can immediately see where the trains are. The wide and sunken passage under the tracks is a natural continuation of the esplanade. The platforms have a largely transparent roof of about 250 meters long that covers the entire area of ​​the platforms.

The entrance on the north side, looking at the Spoorsingel canal, is modest in line with its historical surroundings and the lower flow of passengers.

Part of the roof covering the tracks is made with solar panels that continue uninterruptedly on the sloping roof above the station lobby, with a fall towards the city center. A series of historical elements belonging to the old building (1957 – Sybold van Ravesteyn) have remained intact, such as the original clock on the front facade, the letters that spell the Central Station (now in LED lights) and the “speculaasjes”, two granite sculptures on platform 1.

Below the main esplanade there is a parking lot for 750 cars and 5200 bicycles.

Benthem Crouwel‘s design features two major movements: a shed on the platforms and a concrete scissor over the waiting area and the transfer point for local transport.

The main hall faces its square with its own V-shape: a hood that protrudes in space with its asymmetrical peak pointing towards the center and then descends to the level of functional activities, to take refuge inside, where the roof it fractures into a series of ridges that offer accentuated versions of the peaks on the platforms. In contrast to the march of columns on the platform, there are no supports here, only the roof seems to float on banks of shops and offices.

The structure of the main hall of the station is made entirely of steel, although it remains hidden by the ceiling. Its construction lasted 6 months and comprised eight phases. The individual components were transported by truck and mounted with welded joints or bolted to the site. This process required great inventiveness and flexibility of all parts to ensure that the station continued to operate throughout the construction process.

The deck of the platforms consists of an extension of glass arranged in shallow ridges of crystals that rest on steel beams that extend between Y-shaped columns, a direct reference to the shape of the roof of the old platform. The scale and simplicity of the space, together with the image of columns that evoke a human being with outstretched arms or trees that reach the sky make this a space that emanates lightness and possibility.

The structure of this 250 m long x 150 m wide roof that is located on the tracks and 12m above the platforms is made with a system of longitudinal steel frames without reinforcement. These are located in the middle of the six platforms and under the two long sides.

The floors of the station are covered with stone slabs in reddish tones, and extend from the esplanade to the front yard of the station.

The roof over the platforms is made of glass so that passengers arrive in a ventilated space full of natural light. The light also reaches the lower levels through large voids that contain conventional and mechanical stairs. Solar panels that partially cover the roof have a high level of transparency to prevent them from reducing the amount of light entering the station.

The use of wood in the large ceiling of the main hall plays an important role and is fully integrated into the design, making it more “human”, despite its large scale. It is formed by an ingenious interaction of thousands of wooden slats of different length, width and height. A light, durable and stable western red cedar wood was used.

The exterior of the lobby ceiling is finished with a stainless steel lining.

The port of Rotterdam donated a large horizontal and narrow LED screen that was placed in the main hall and shows images related to the city’s heritage. 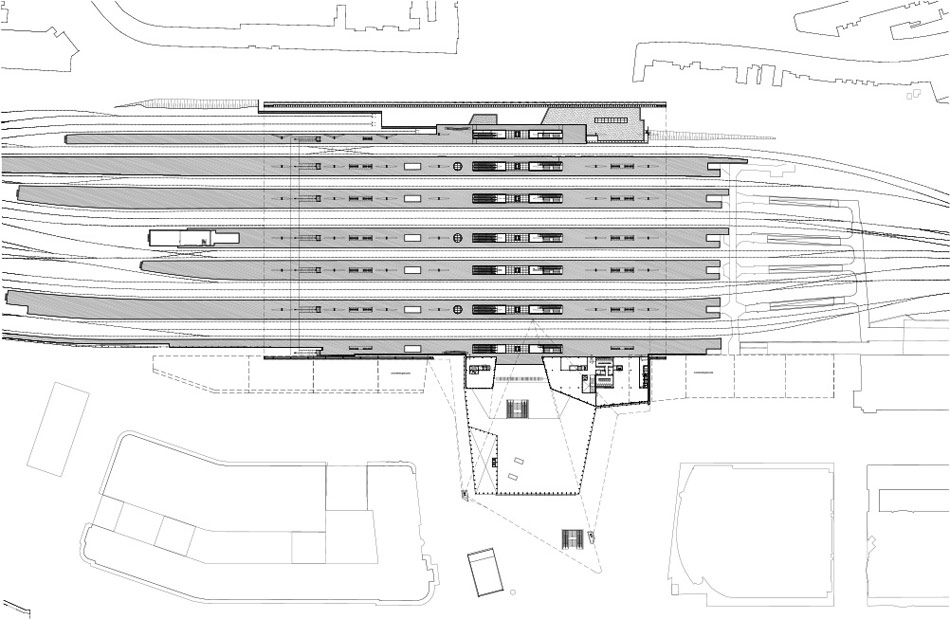