The museum, a section extrusion open at both ends with external schema that encapsulates a wave or fold, flows from the city to the waterfront symbolizing the dynamic relationship between Glasgow and shipbuilding industrial and maritime heritage of the River Clyde. Transparent glass facades allow light to flood the main exhibition space. The redevelopment of the river bank tries to reconnect the city with water.

Zaha Hadid won the tender to build a new Museum of Transport competing with such prominent architects as Norman Foster Richard Rogers or Daniel Libeskind.

This building, which replaces the old museum of transport, it was necessary, as the popular collection of the museum needed a proper storage space’s vast archives and provide an exhibition space according to the new era.

The Riverside Museum is located in the place of the old shipyards A. & J. Inglis Shipyard, 100 Pointhouse Road, in the port of Glasgow Scotland, United Kingdom. This location on the north bank of the River Clyde near the confluence of the River Kelvin it permits you to arrive at the museum with ships docking at the pier.

The Transport Museum wants to provide a link between the city and the river access north, south entrance, with the great concept of its central passage, without columns, the heart of the building, offering all the open space. You can walk around it, there are no external plant, it’s all in the space under the winding inside cover that creates the folding roof of the nave, with its horizontal lines that lead visitors through the space. The general form expresses a kinetic energy that works at a conceptual level, dematerialising practical problems such as the structure

The space is obviously on the move, suggesting the dynamism which all exposed parts are now private. There is some train or tram tracks, overhead wires, hangars or sheds throughout the entire building, however it is not an imitation piece of high technology and its progress, much like many other transport museums. The space obtained by Hadid, unified by a single yellow-green hue, it is architecture, not equipment, a single room, not a machine, in which all objects can coexist.

To create a column-free exhibition space, the steel structure is the architectural form to obtain the necessary depth to cover the distance.

The structural concept is based on a folded plate action, using the rigidity in the plane of a material. With the museum’s roof structure rationalizes this action in a series of inclined beams made of standard steel profiles.

The museum covers a floor area of ​​11.000m2, with an exhibition area of ​​7.000m2 divided among the permanent collection, another area that evokes some of the streets of the city, several thematic areas, more cafe, shop and teaching area.

Inside the building, the extrusion of the north facade accented causes an undulating ceiling floating above exhibition space. Draw curved walls toward the ceiling, which is responsible for development and structure of the column space is created underneath, so essential to the flexibility of exhibitions. Perimeter spaces are pragmatic, administrative services on the ground floor with offices and small areas of exposure in the upper level spaces to natural light coming through the walls from floor to ceiling glass of the facade zigzag profile.

Must also be considered as belonging to the museum space sailing “Tall Ship”, moored at the dock in Glasgow, opposite the new building. It is the only boat made in the Clyde shipyards still afloat.

At both ends of the passage are located within two entrances to the museum. Which overlooks the city on the northern facade resembles the zig-zags of a graph heart monitored or the roofs of the houses in Glasgow.

The entrance faces south, is on the glass facade facing the river and which reflects the sailing ship moored near the nineteenth century. This facade acts as a “Claude glass” through which you can see the ships whose production belongs to another era.
The museum operates as a fluid and free them groups of objects, a number of major attractions and high-density screens.

This plant has the largest exhibition space of the Museum of Transportation, in its central part and broken, around which are distributed businesses, receiving, learning classrooms, work rooms, offices, a cafe, snack bar, the Clyde Maritime Trust and the three “streets” themes.

The inner wall of the gallery is located in the south-east of the plant is opened to allow views of the samples exposed in the surrounding area.

In this new building is a series of windows that are known as “the streets”. These businesses range from a pharmacy representative, a computer store or a cinema. They are distributed in three blocks, covering the progress of the periods from 1900-1930, 1930-1969 and 1960-1980.

There are 12 themes identified within the Riverside Museum, including streets, which are under the title of the categories “Connections” and “Directions” to examine all aspects of travel and transport use of the collection on display.

This level balconea on the ground floor, leaving a large central vacuum, air passage has an irregular which offers a unique exhibition space. There is a center of collectors and various rooms for use by the museum.

A beam of 4m deep and 25m placed on the second level loads transferred from floor to ceiling and columns from the edge of the aperture and other beam 6mx15m Vierendeel allows exposure of a locomotive of 36 tons at the edge of the track columns without directly below.

In the structure of the building have not been built exhibition galleries independent, but if you have separate spaces devoted to teaching.

The structure consists of a tangle of twisted steel in a profound gesture towards the River Clyde which was later covered by the plates forming the roof. This structure is able to support the roof from the front to the next bend and then to the end of the building due to the inherent stiffness created by the geometry of the roof. This is only possible by changing the direction of the structure in the transition zones, creating such rigidity which also helps support the folded plate structure.

Given that the folded sheet are inclined planes and gravity is vertical, the structure normally throw out and flatten. To avoid this, there have been-I beam sections carbon steel, which are transverse to the bent plate, sections of 8m long sections diagonally and horizontally 6m long. When these different members converge, they form a node that is welded off-site.

Zaha Hadid regard, in an interview in which he wondered why such a complicated structure concealed, said: “….. if it were a monument, like the Eiffel Tower, then it should to show their bones. In this case the intention is to achieve a level of abstraction….. ”

The profile “skyline” of the building resulting in a beam system. The peaks and valleys of the same form the upper and lower part of the arms of armor, using circular profiles of 406 mm in diameter and 8 CHS, hollow, while the vertical elements are defined with rolled I-beams with 680 mm deep, placed every 6 feet along the extrusion.

Curved areas, transition zones, were used as rigid, serving as anchor points for the roof structure. These areas are formed by a series of interlocking concave and convex surfaces generated as architectural form of change of address.

With the side walls, structural studs in the north and south facades and curved areas in the center of the exhibition space to provide support, it was necessary to use interior columns, leaving more surface transparent. The service area adjacent to the east and west elevations were especially prepared to provide lateral support to the ceiling.

The project was begun in 2007. During the summer of 2008 and made the foundations and underground trenches created to house the services and materials needed for construction.

In late 2008, the structural steel skeleton was taking shape.

In 2010 it began to place the building envelope and the outer packaging services continued with gardening.

In late 2010 the construction works were completed and the museum opened in 2011 in conjunction with the ship Glasgow’s Tall Ship, Glenlee, docked at the pier in front of the museum.

The structural framework of the museum is based on a stack of steel, reinforced concrete substructure containing a reinforcing network of trenches and service. The plates of the first and second floor were made of reinforced concrete “in situ” of 150 mm on profiled steel decks and steel girders also.

Both facades and roof panels are lined with pre-patinated zinc, turning gray body, together with butt joints. The two ends of the museum are closed with glass walls.

Inside the green “pistachio” of the walls has been widely criticized, both for and against. Questions, the architect has argued: “… the Transport Museum is like a game, not as an art gallery or as a white box…” 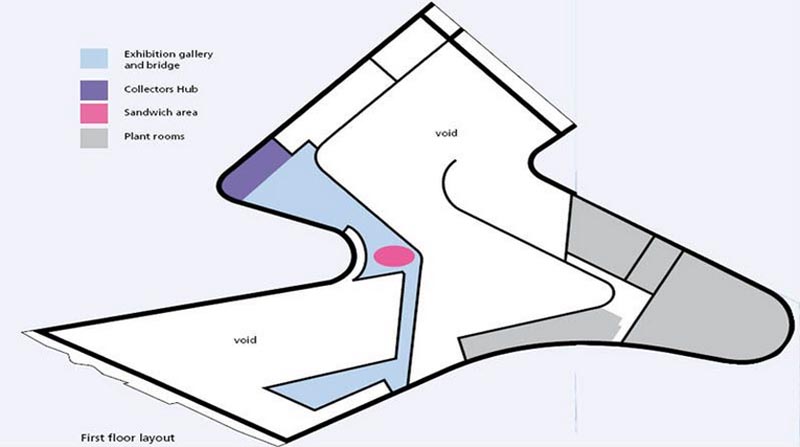 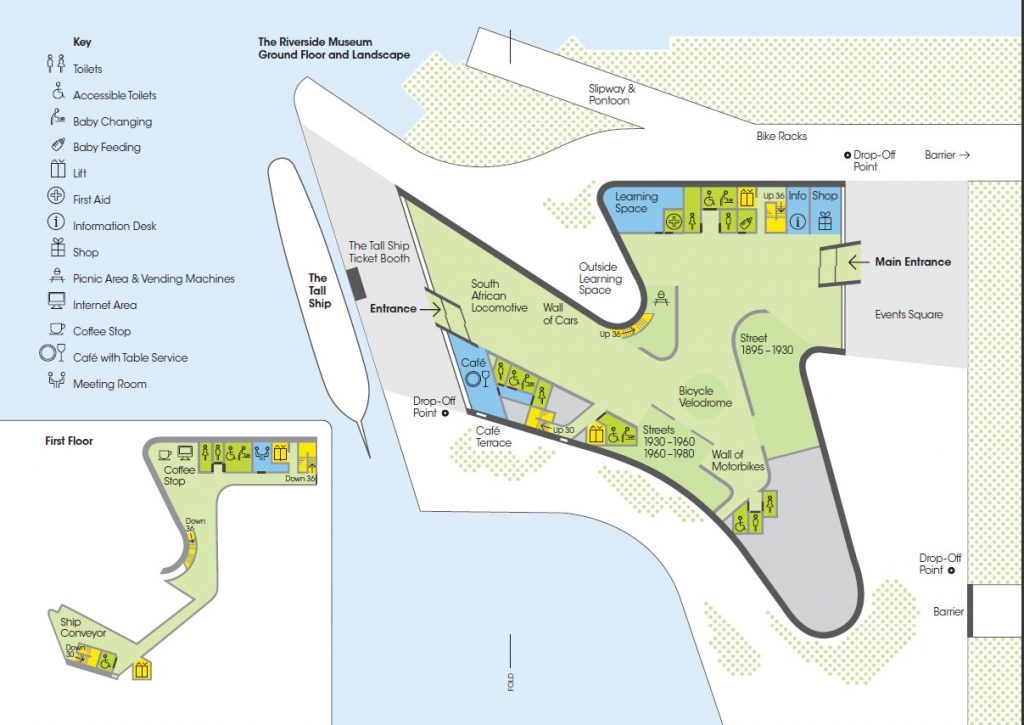 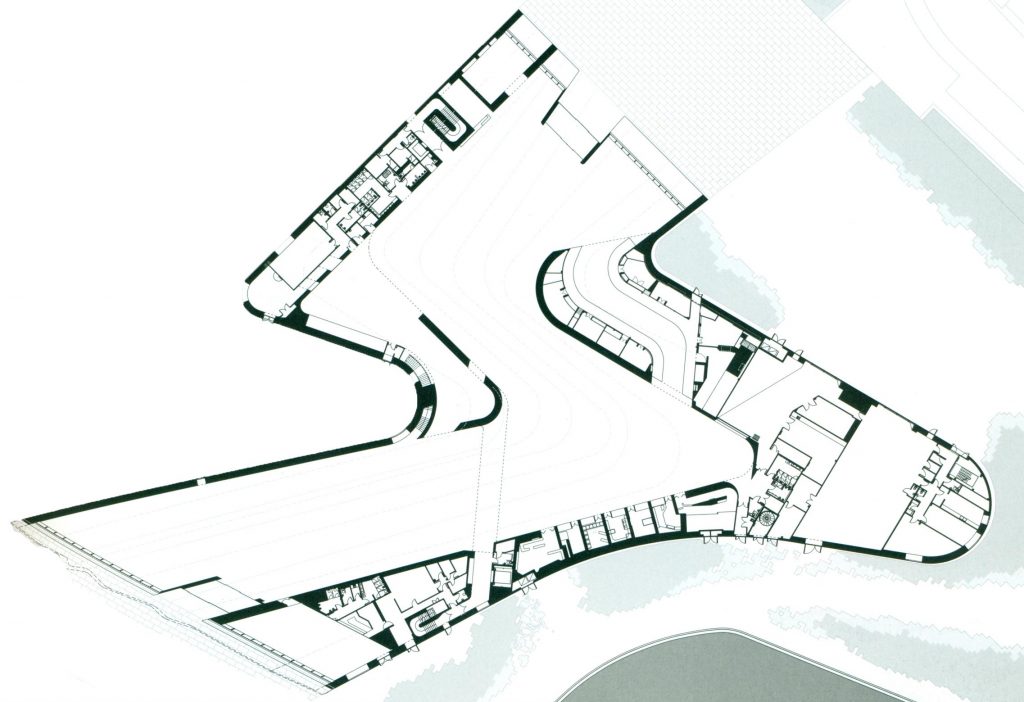 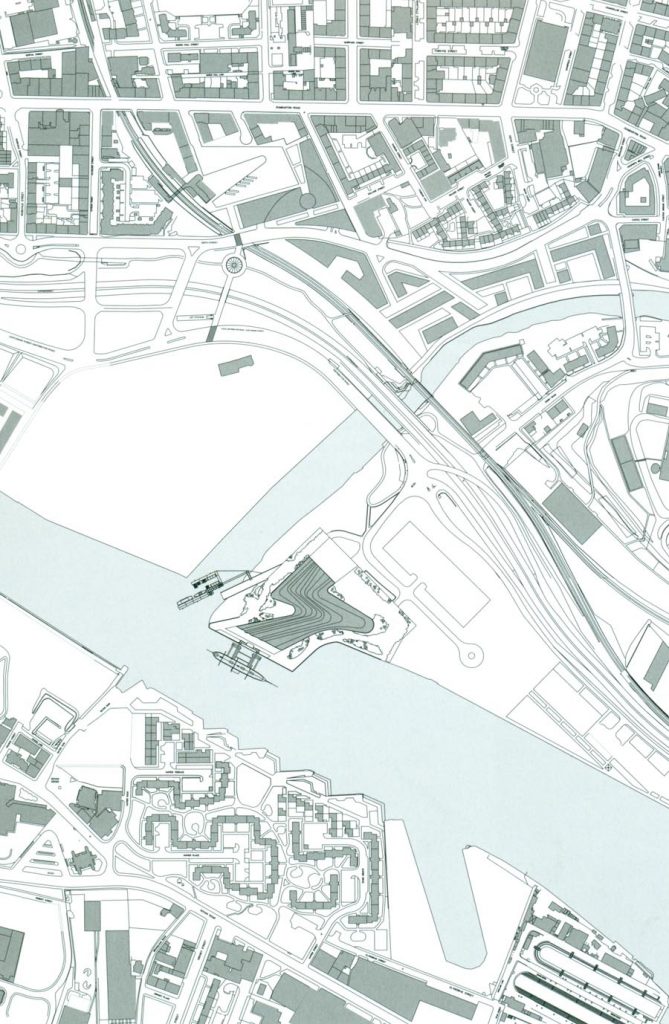 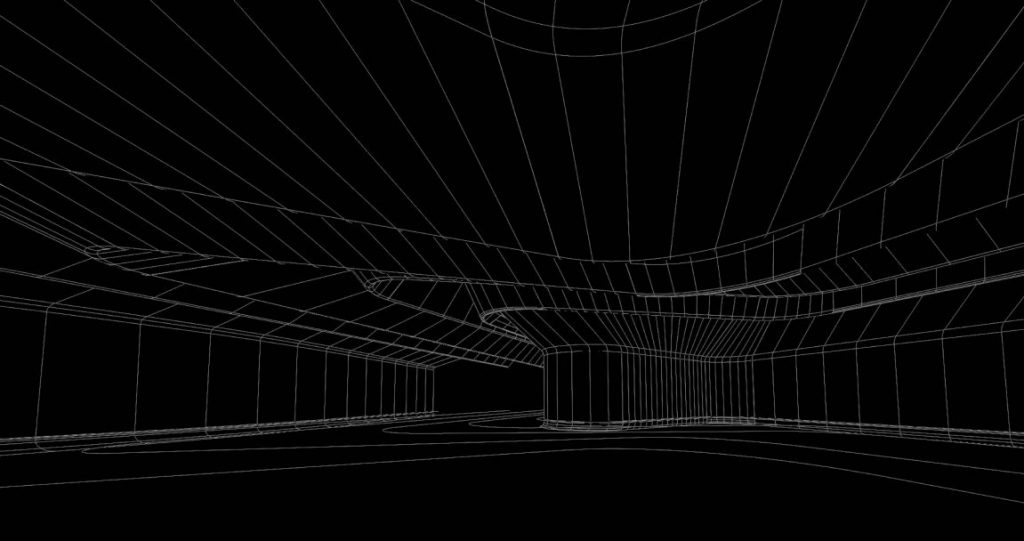 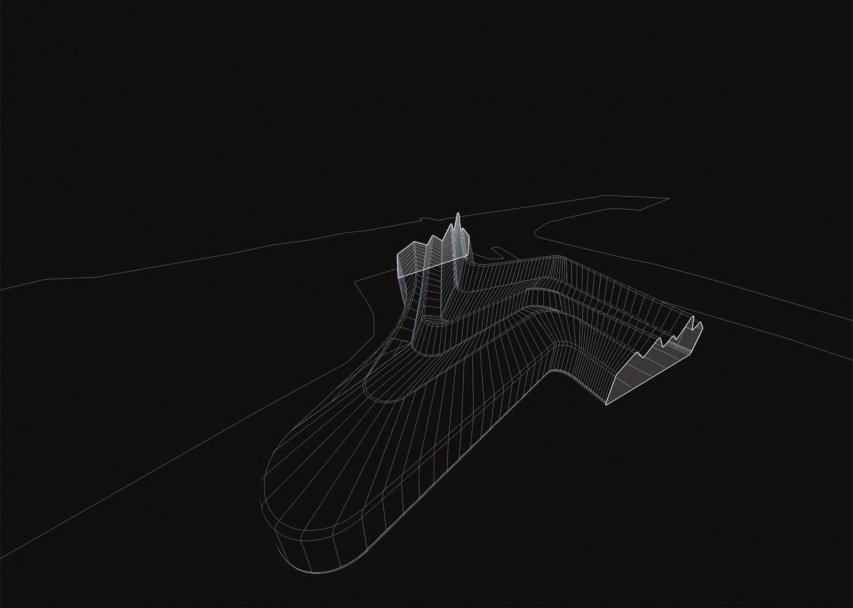 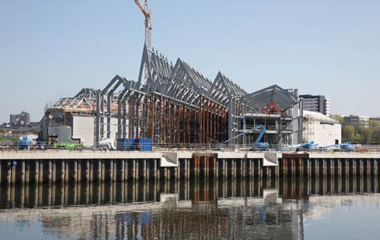 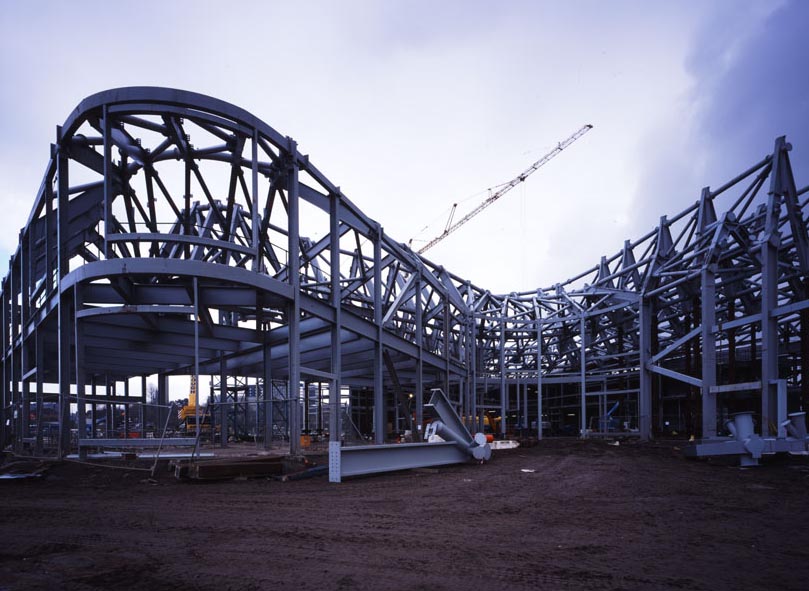 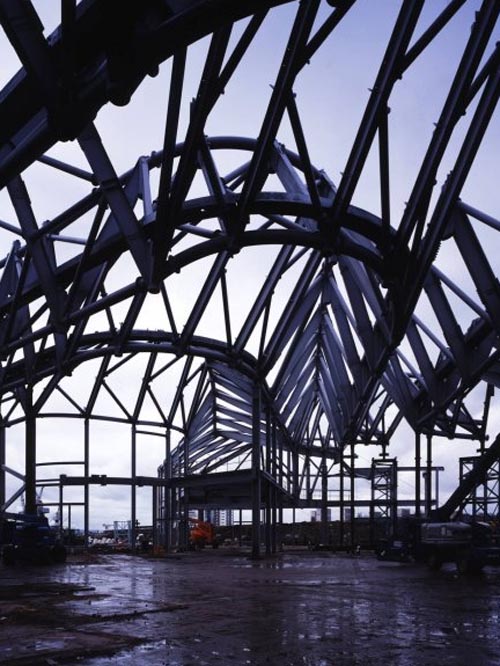 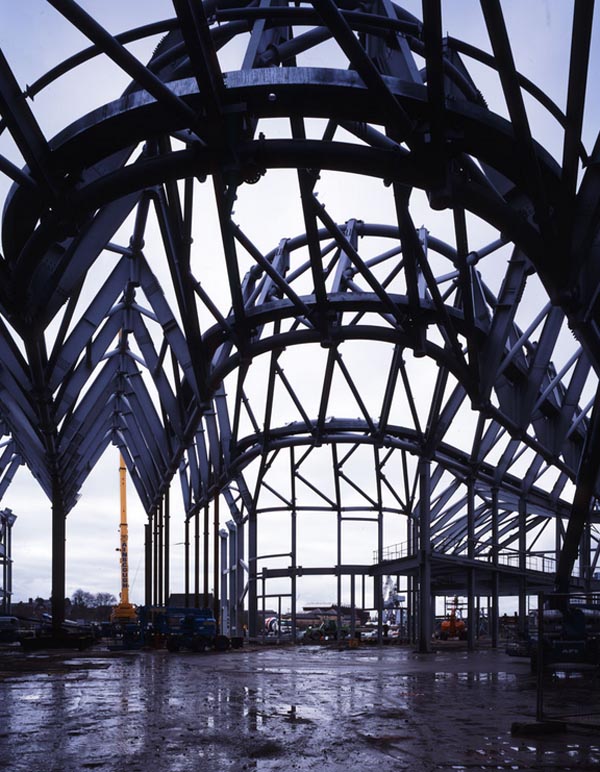 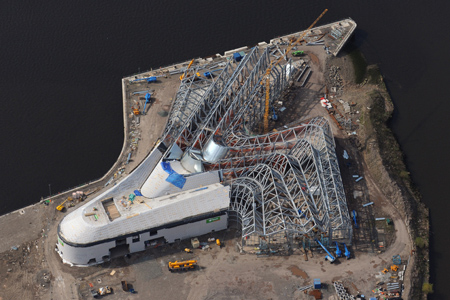 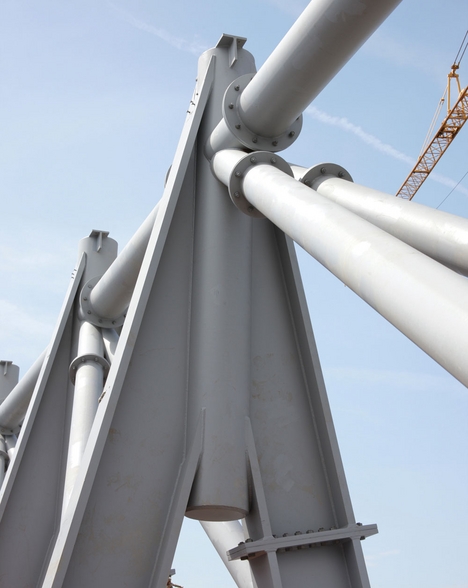 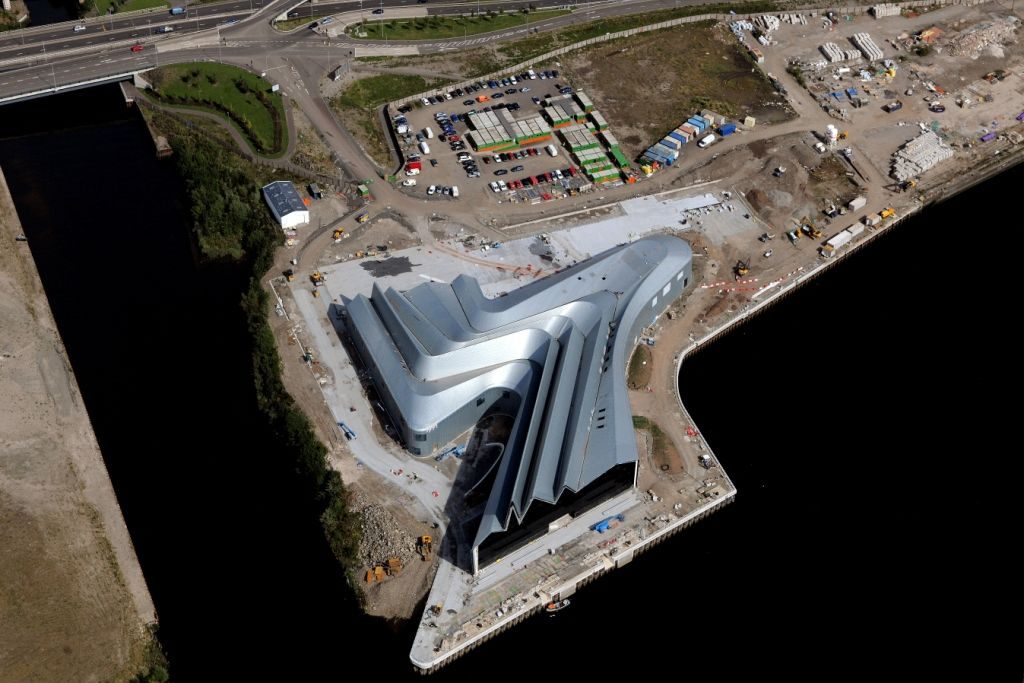 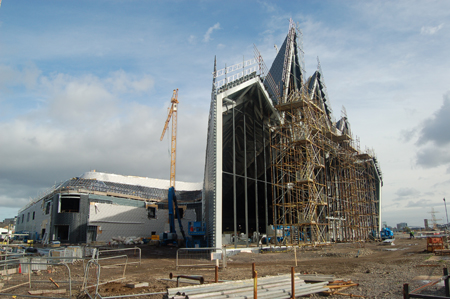 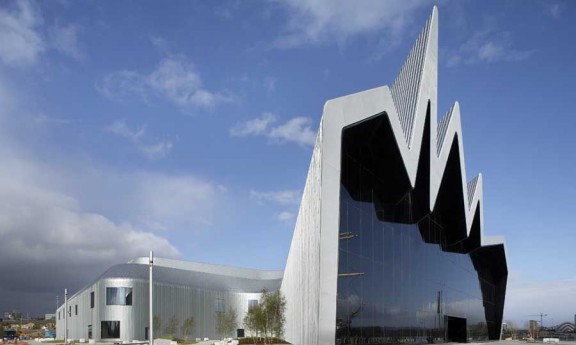 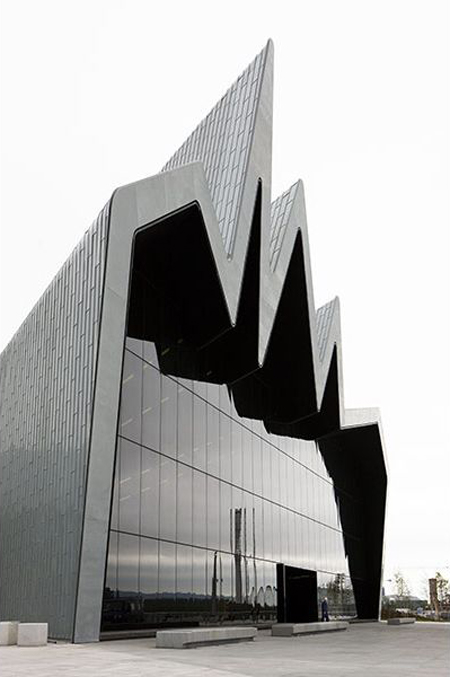 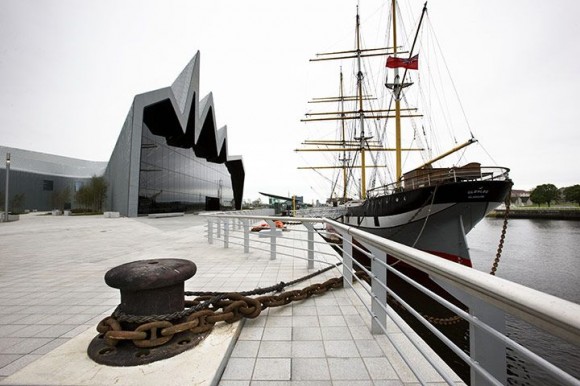 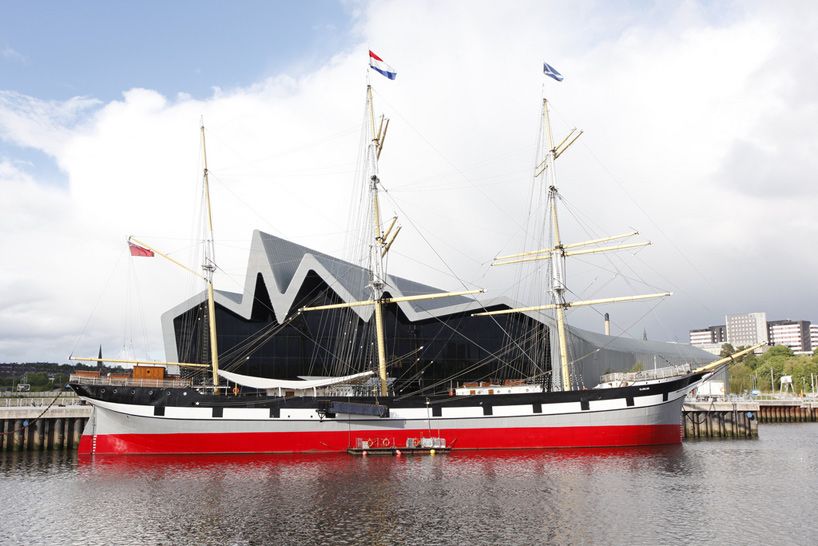 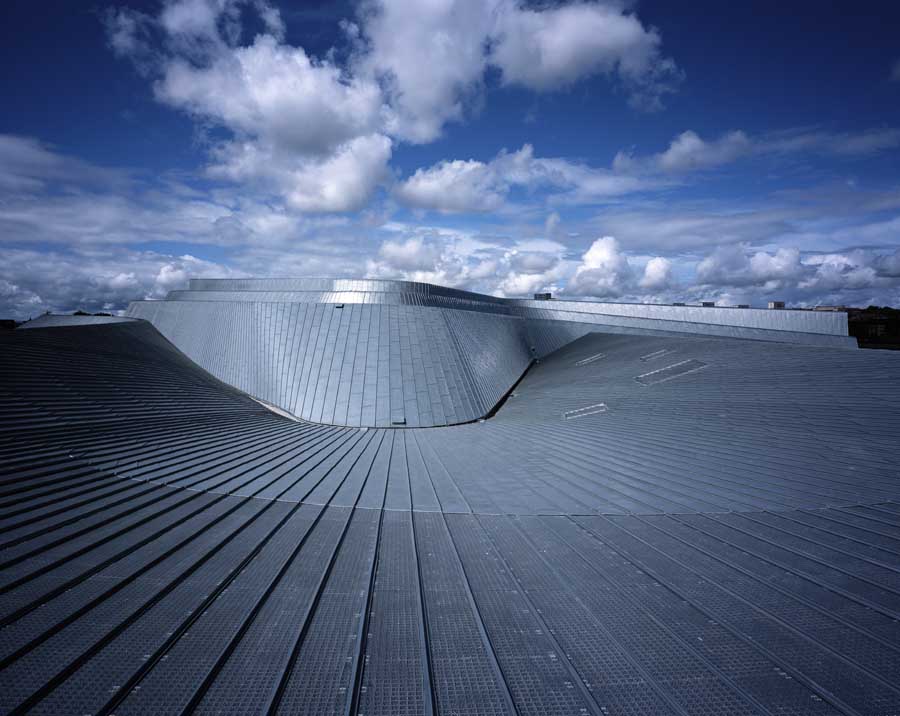 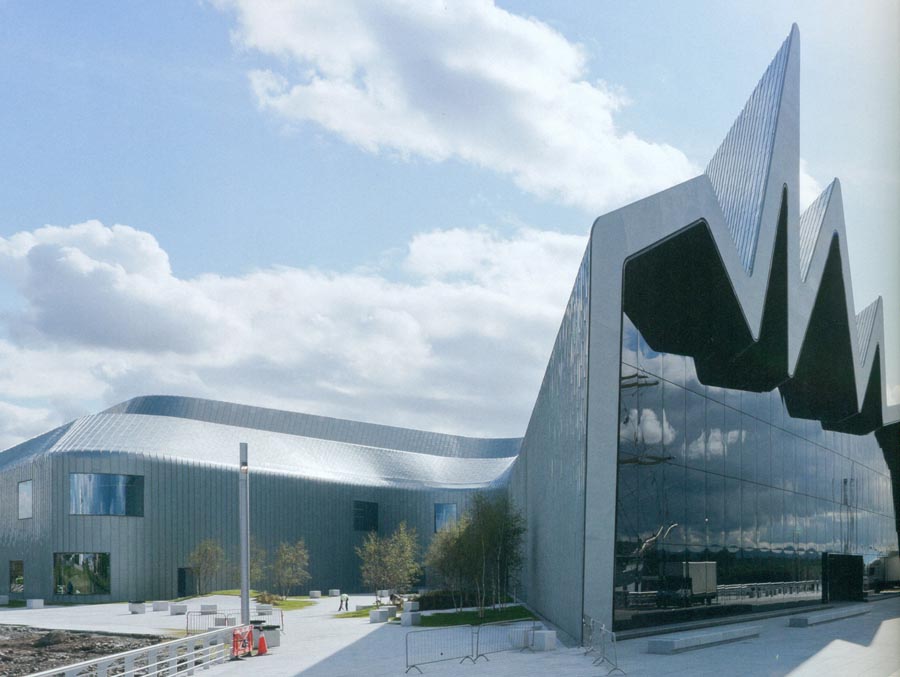 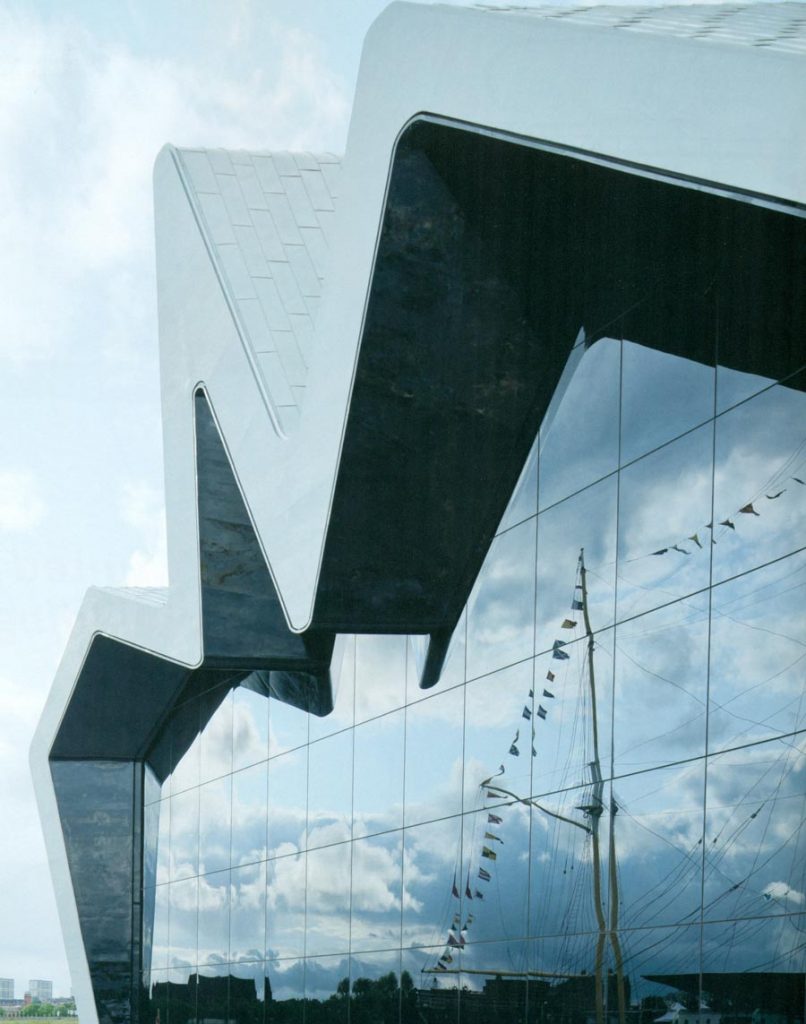 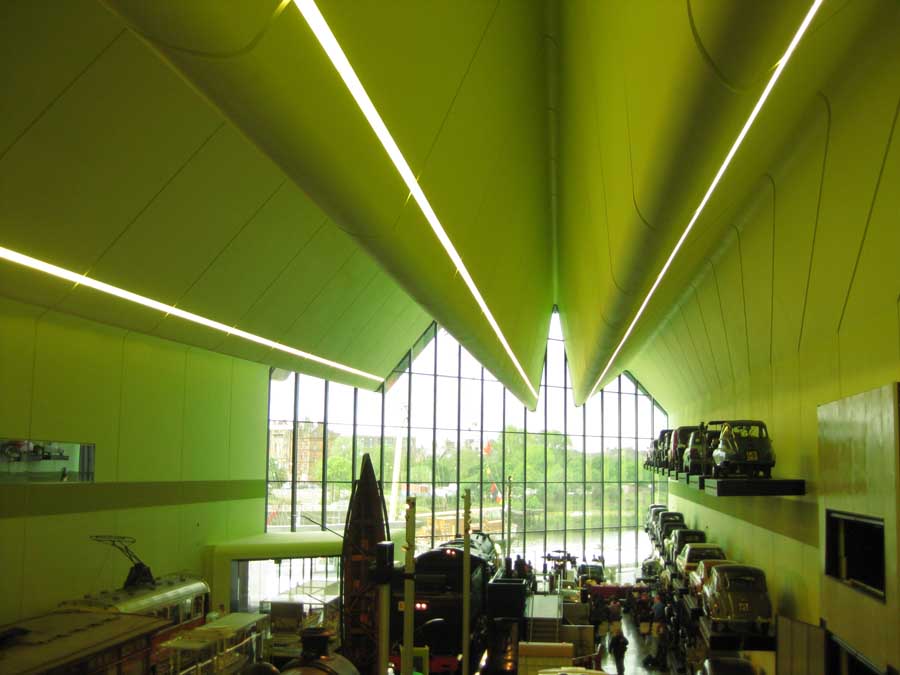 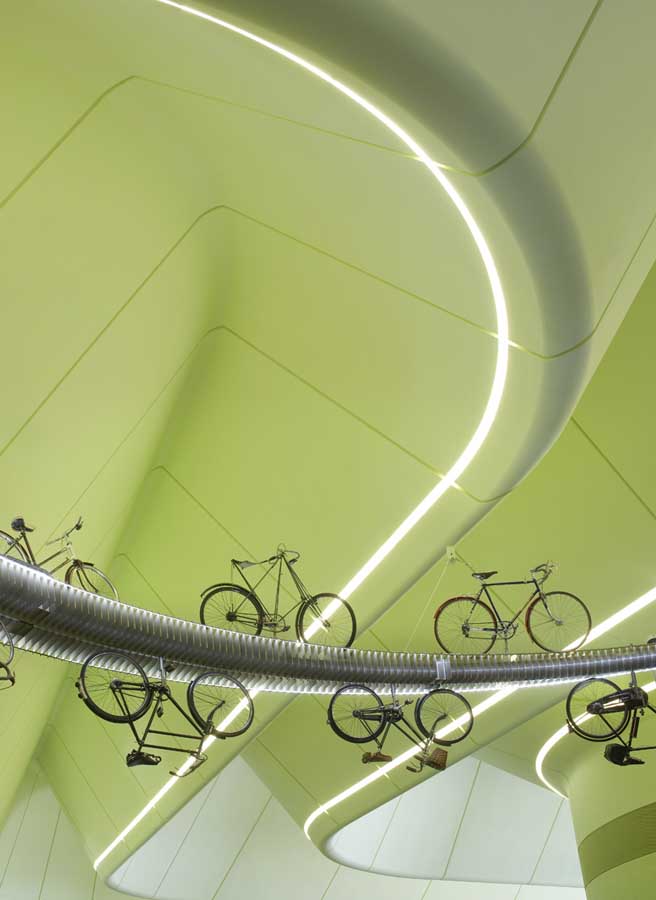 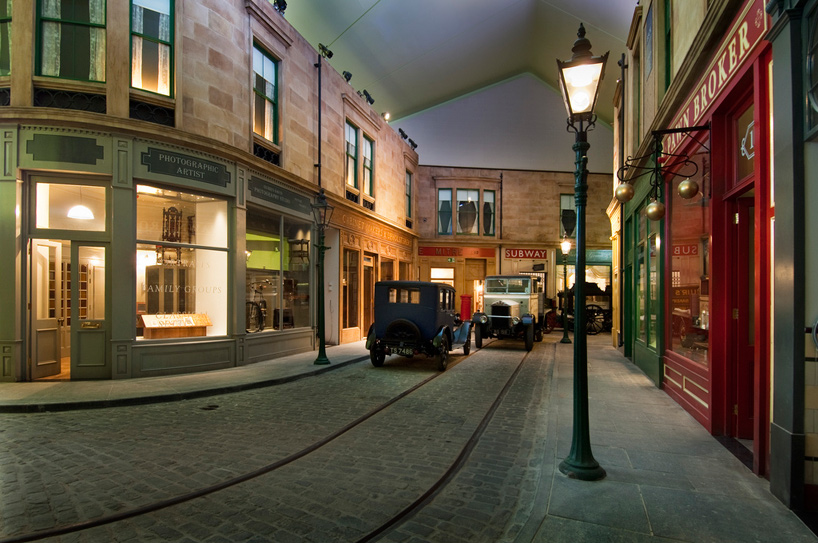 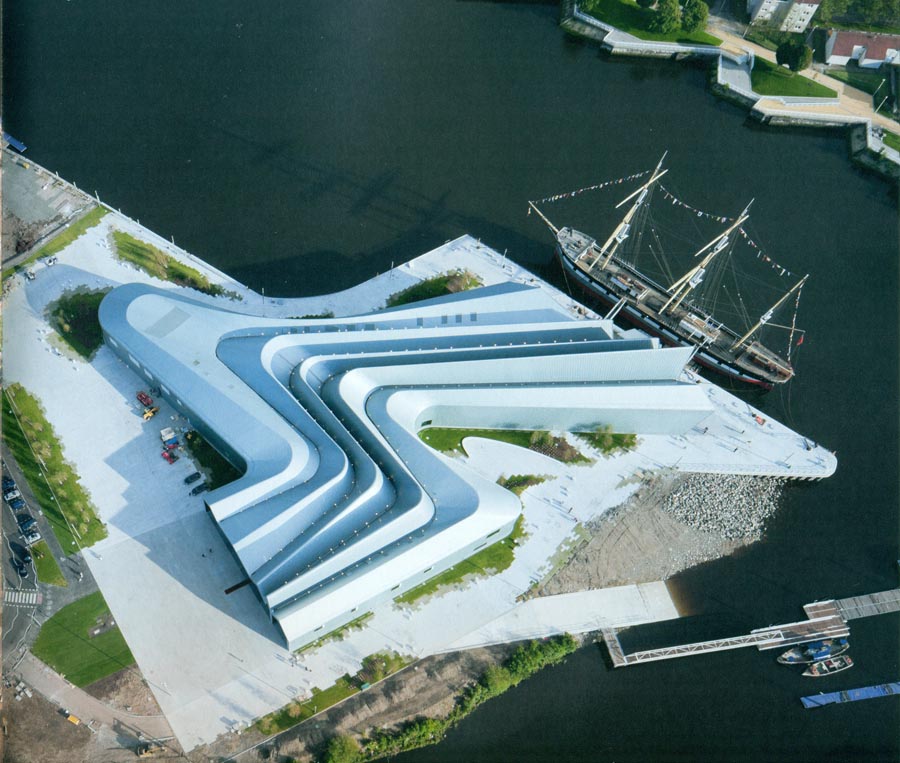 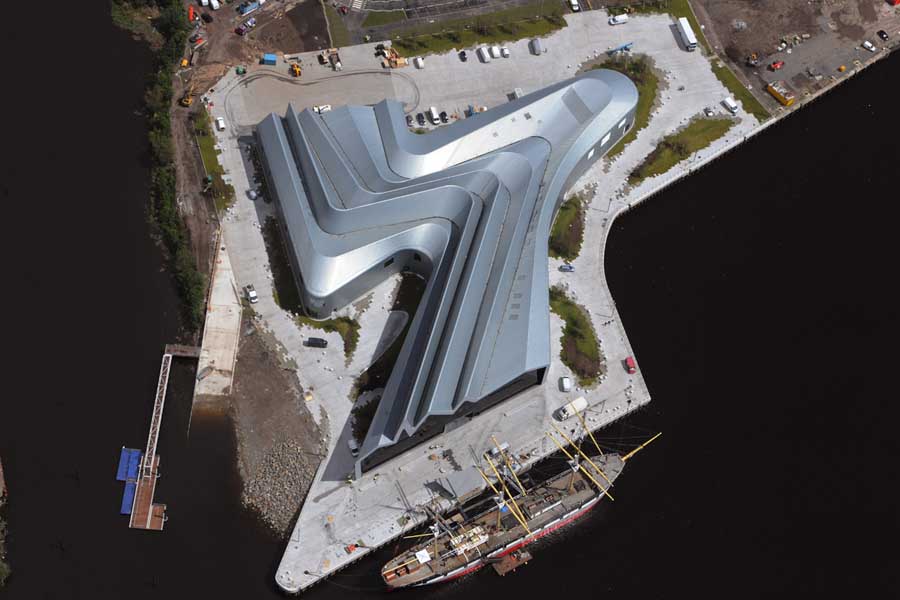 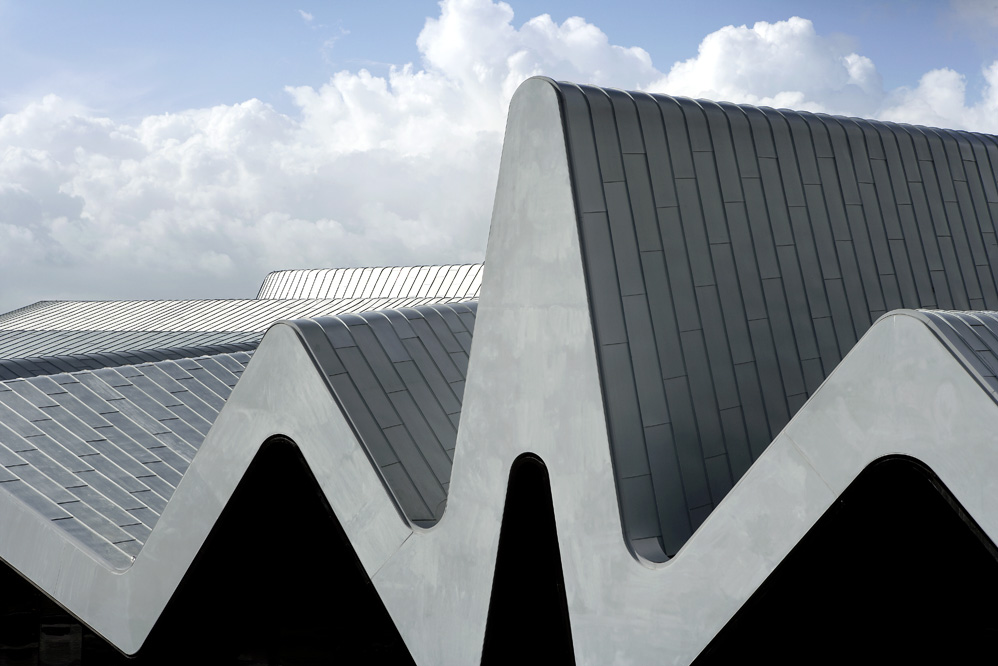