The Philips Pavilion at Expo 58 in Brussels, Belgium, located in a small room next to the Dutch section and away from the center of the fair, was built in an unusual architectural style and new at the time: the hyperbolic parabola. The design was done by Le Corbusier in collaboration with the Greek composer Iannis Xenakis, a young architect and engineer, working for Le Corbusier in those days. For this special occasion, the American composer Edgar Varèse composed a new poem Electronic, ELECTRONIQUE POÈME (1957), which would be heard during the days of exposure through 425 speakers at the same time you could watch a film made by Le Corbusier. The work was a combination of musique concrete and electronic sounds. Images and photographs were projected on the walls without any attempt to sync with the sound.

The artistic director of Philips in Holland, LC Kalff, did not hesitate to instruct Le Corbusier flag design would represent them in the Exhibition of 1958, having been impressed by the church Notre Dame du Haut that the architect made ​​in Ronchamp.

Xenakis’s contribution was not only as assistant architect Le Corbusier, he also worked as a composer. Interpolated between the Poème Electronique 2 tracks sounded his “Concret PH” PH by Hyberbolic Paraboloides, a feature flag. Using a recording of crackling embers, took fragments and raise them together, using a variety of density whenever used again. This approach is often referred to as “clouds of sound”, a concept he explored in his music composer of the time.

His architectural work provides ways in the imaginative world of his music. In the Philips Pavilion emphasizes electronic music superbly futuristic parables of Le Corbusier, its raids, their curves. The mathematics underlying their construction, and the resulting forms have a direct correlation on how Xenakis used instruments, organizing tickets and ringtones, according to the mathematical result and statistical formulas, translating architectural space planes musical time.

Le Corbusier busy with the planning and design of Chandigarh, left most of the decisions for the Philips Pavilion at Iannis Xenakis. This later led to conflicts between Le Corbusier and Xenakis who finally left the office of Le Corbusier to pursue their individual work within architecture and experimental musical composition.

The Philips Pavilion represented an important artistic phenomenon through its synthesis of architecture, visual media and music. It was a great space in which slides were projected and the soundtrack of “Electronic Poem ” specially prepared by Edgar Varèse was heard.

The purpose was to display the flag technology company Philips, a specialized Dutch electronics company, from sound production to fluorescent lighting for X-ray technology. Philips’ goal was obviously promotional. But instead of having a traditional pavilion in which to display their products to visitors, Philips decided to create an integrated modern art work that would use its wide range of technologies. Therefore, the Philips pavilion did not exhibit itself, but it was kind of exhibition in itself, a showcase covering everything that Philips could offer.

To make the experience come through all the way had to be the work of a multidisciplinary team, an architect, an artist and a songwriter.

Le Corbusier had minimal exposure in the details of how it would work inside the pavilion, gave a vague concept of what experience should accomplish. The basic guidelines given to both Varese were Xenakis as the interior would be similar to the stomach of a cow, with the resulting basic form of a mathematical algorithm form.

The idea was that visitors enter in groups of 500 at intervals of 10 minutes. During 2min in the curved hallway, the audience would hear the transition piece composed by Xenakis and then come into a room in darkness slowly for 8 minutes and wrap people in a space of light and sound accompanied by visual images along the walls of the pavilion. At the end of the projection 8 minutes would leave viewers ” digested ” through another exit, while entering the next group.

Le Corbusier was on the inside idea, where a broker receives visitors and leads to the pavilion. Now in its homogeneous inside the message involves the audience for 8 minutes in which the architect intended to show through projected on the walls “our civilization to the conquest of modern times” images. Images of nature, science, universal art, plants, photographs of the Universe and many others that dialogue between abstract and color samples. Sophisticated electronic systems were installed to coordinate the sound projection.

… ” I will not make a pavilion but an electronic poem and a ” miracle box ” that contains the poem : light, image, rhythm and sound embedded in an organic synthesis “… Le Corbusier.

Iannis Xenakis, who was working in the office of the architect, the project was given while abroad.

Edgar Varèse was proposed by Le Corbusier to replace Benjamin Britten in the composition of music to accompany the artwork inside.

Although Xenakis was the principal designer of the Philips Pavilion, architecture originated with the general concepts of Le Corbusier.
Your starting point for the structure was a series of curved hyperbolic planes parabaloides generated mathematically from straight lines that form an enclosure shaped store to cover the plant in the form of stomach. Proposals by Xenakis sloping walls to cover the hyperbolic paraboloid planes satisfy the idea of ​​Le Corbusier irregular warped surfaces for projecting images. The geometry also covered the wishes of Le Corbusier for mathematical rationality, while the spectacular slopes and contours of the flag associated with an expressionistic language.

The structure is made with a combination of steel and reinforced concrete structural system. The prestressing steel is attached to heavy concrete supports and the spaces between them are covered with thin precast. At the ends, wrapped steel masts cables that pull the structure.
Complex shapes flag made ​​it impossible to build a conventional poured concrete structure, the solution reached by Xenakis and his engineer Hoyte Duyster was to create a system of prefabricated concrete panels hung in tension steel cables. Because hyperbolic paraboloids planes are generated by straight lines, the method of using prefabricated panels was easy to implement.

The texture of the coating material allows it to be focused according to the movement of the resulting hyperbolic forms of a simple mathematical equation and hanging of the three points of the tent enclosing the pavilion.

The panels were built in a shed by a simple sand mold following the game of flag curvature. Once the panels were extracted from the mold, were numbered and shipped to the construction site to be quickly assembled, hanging them on the steel cables embedded in concrete ribs thin specially constructed for this purpose. The result was a building built quickly and efficiently to meet all both visually and acoustically requirements.

The speakers are attached to the walls which were covered with asbestos material creating a textured appearance.
Varèse produced a plane, especially detailed for the entire space, taking advantage of the physical layout of the pavilion, especially the height. Asbestos hardened walls creating a cavernous acoustic. While the public was in and out of the pavilion could hear Xenakis Concret PH.
Le Corbusier commissioned composer Edgar Varese’s Poem Electronique pair, despite not being the composer who would like to Philips.

The Philips Pavilion was demolished on January 30,1959. Like almost all buildings built exhibition was a temporary structure that would never stand beyond the duration of the fair. Replicas were made, but the whole integrated in a single space and moving around the visitor, in a given moment in history, it is something that could never be recreated again. Therefore, the Philips Pavilion and Poeme Electronique remain an artistic achievement that has left its mark in just eight minutes from history. 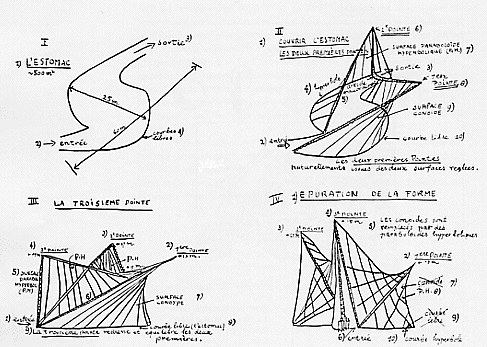 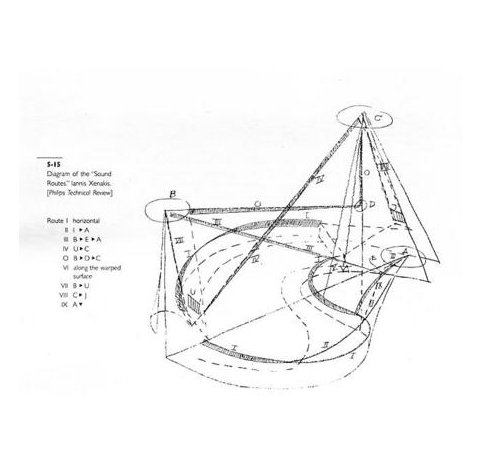 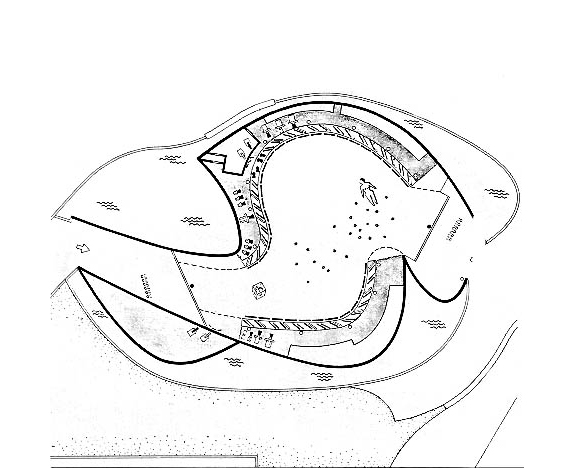 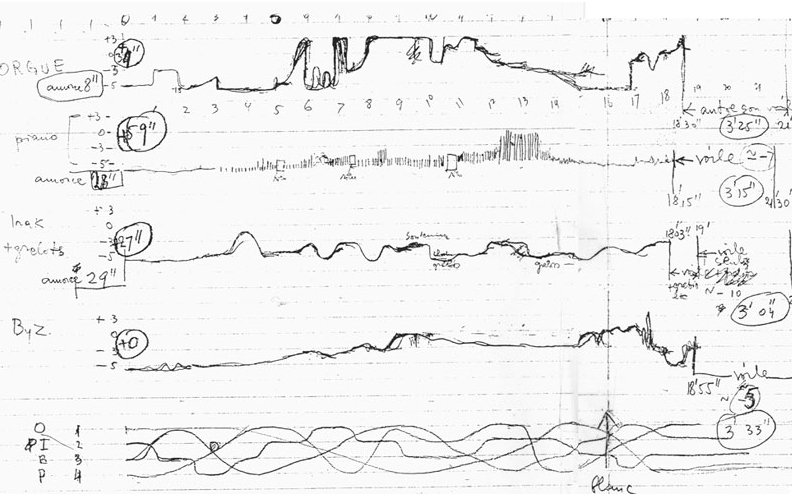 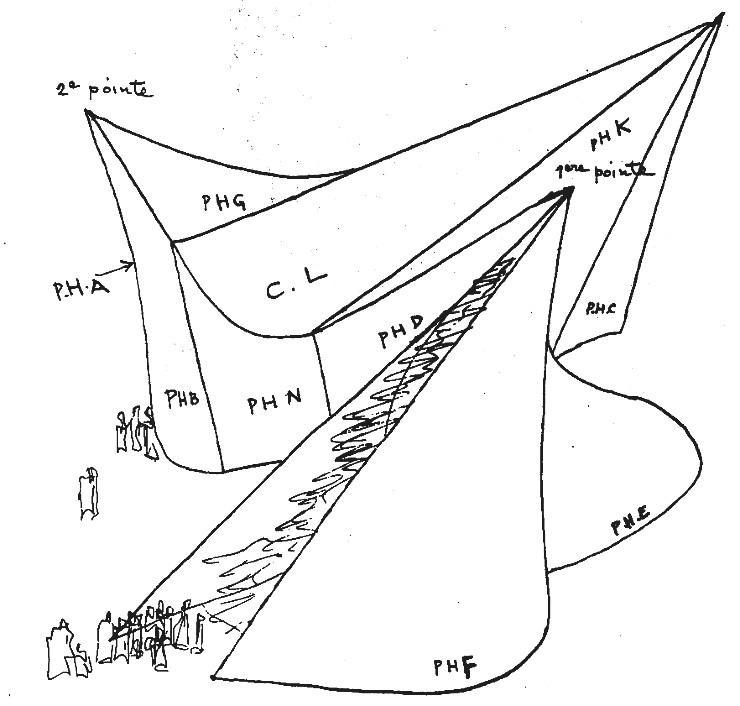 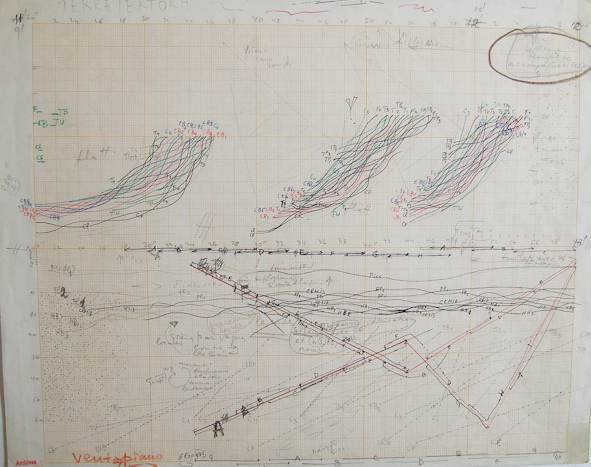 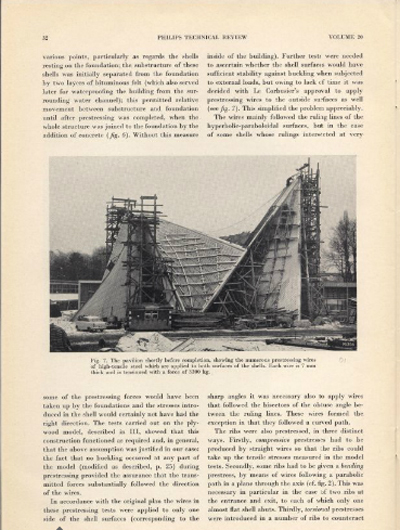 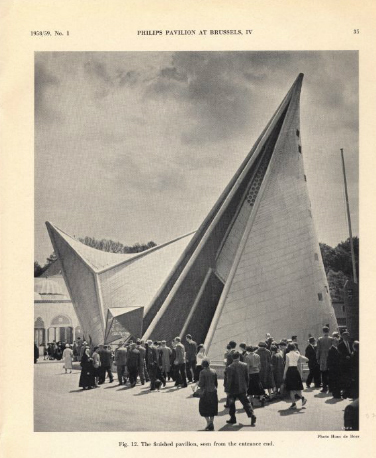 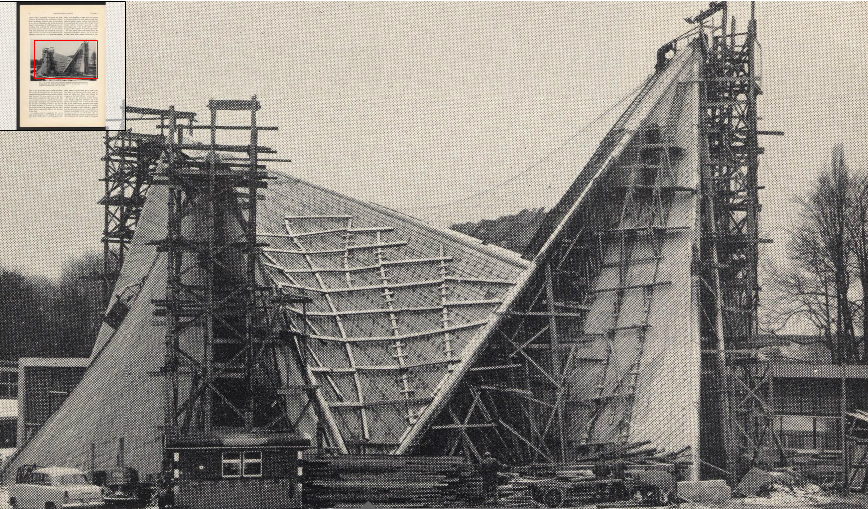 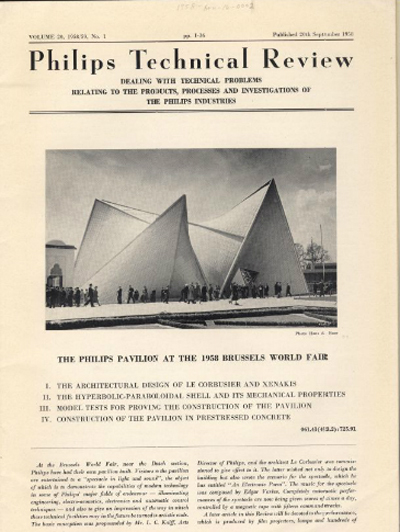 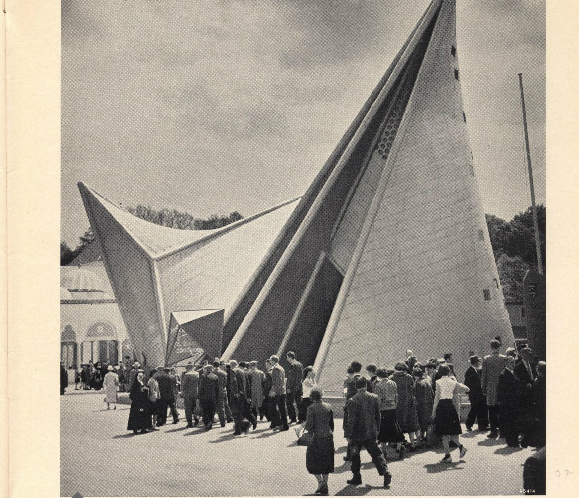 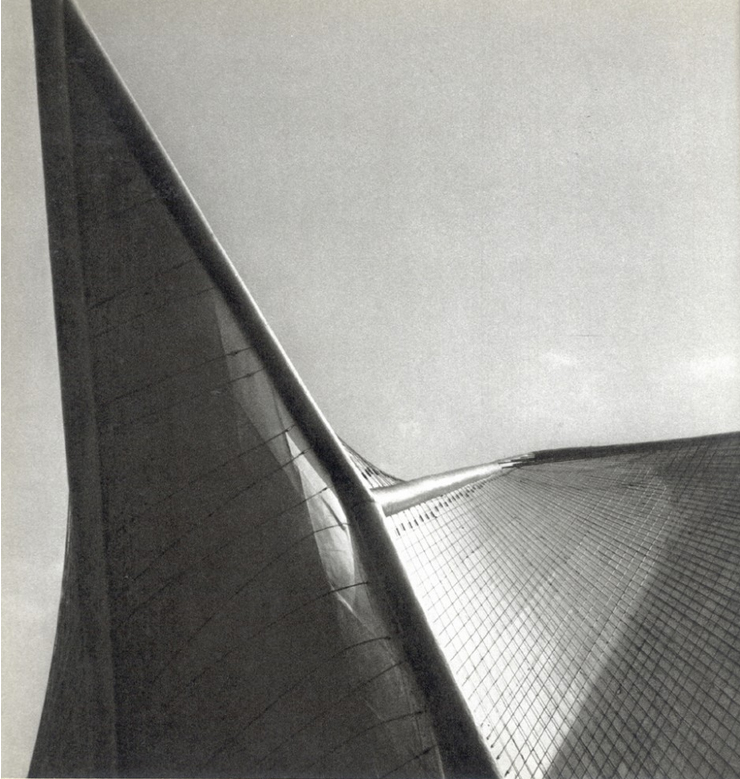 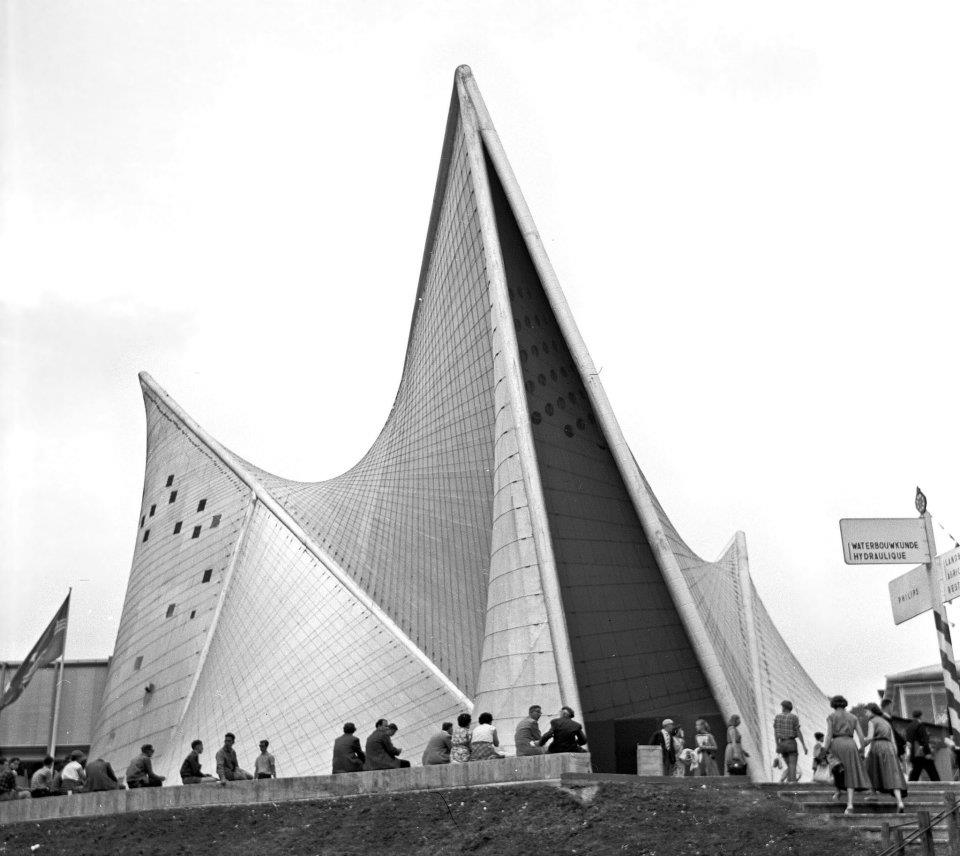 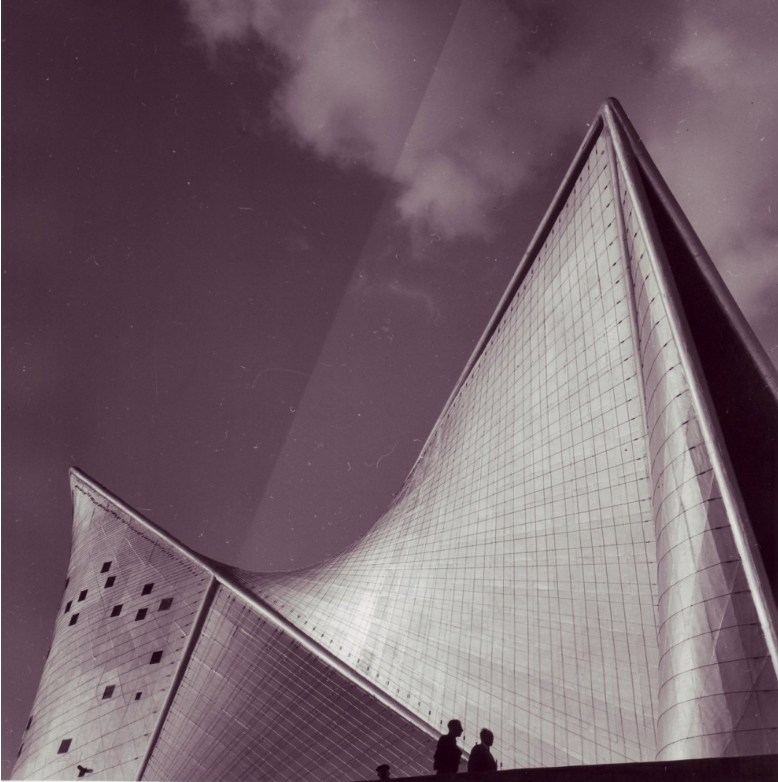 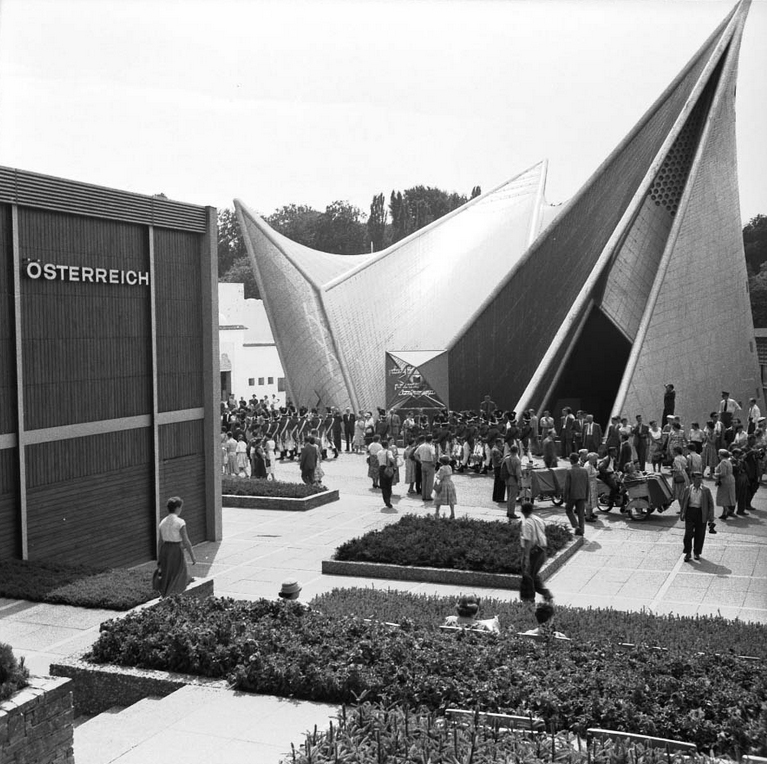 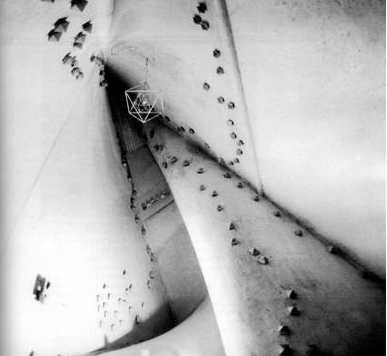 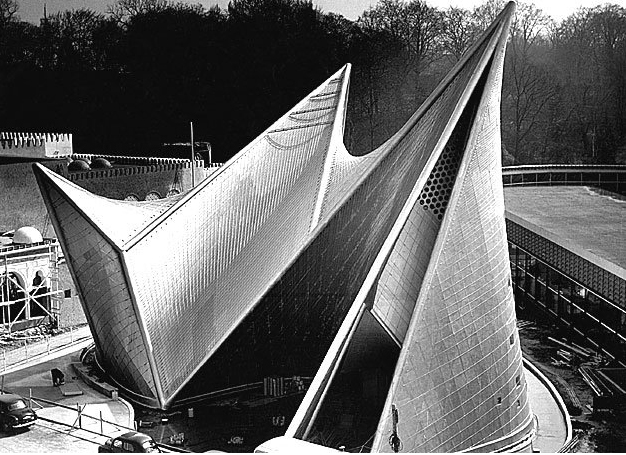 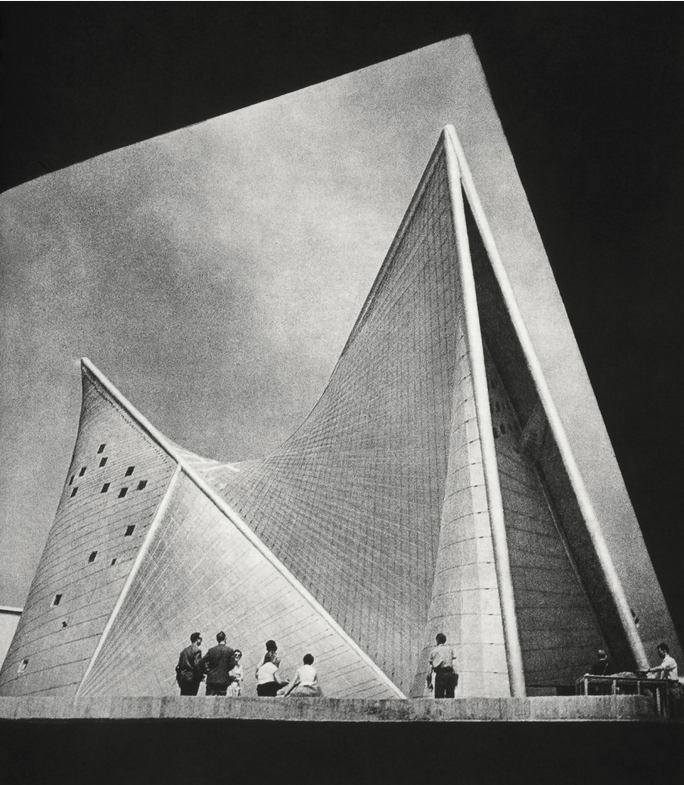 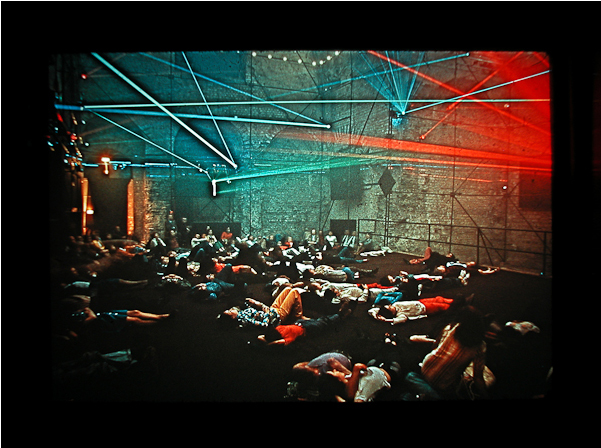 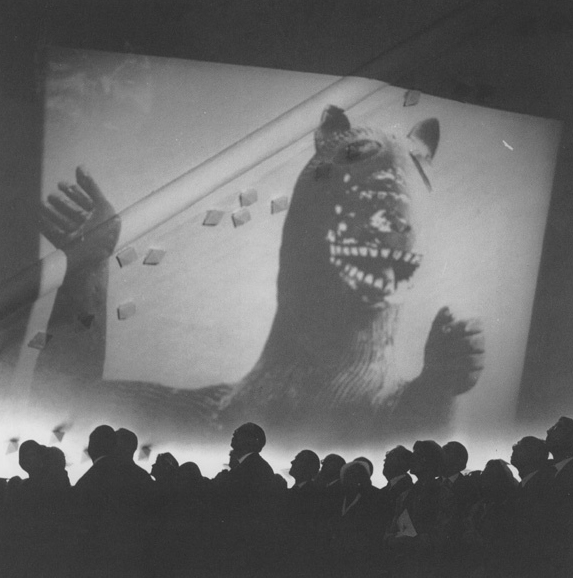 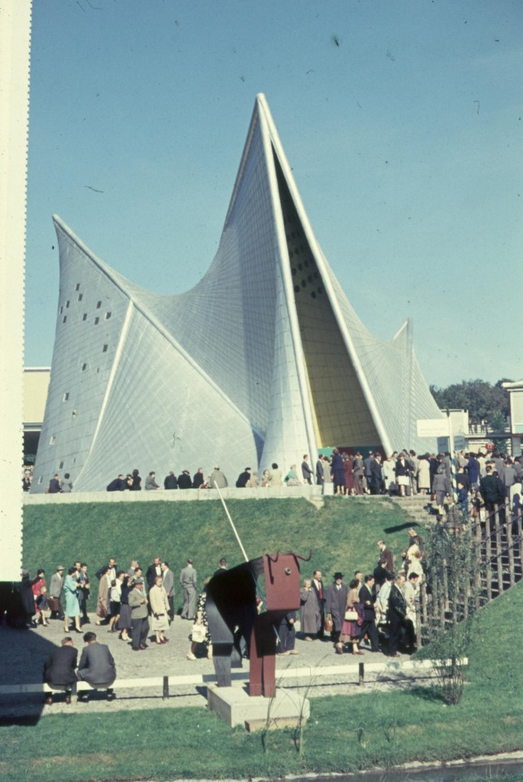 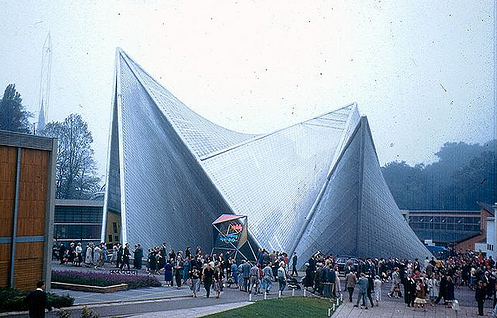 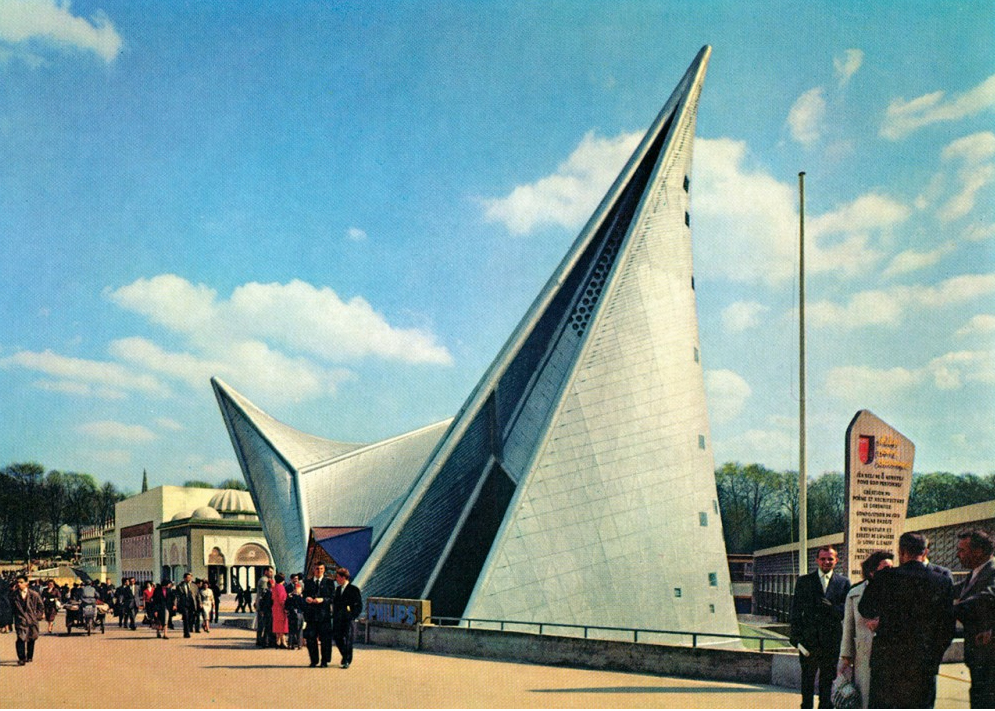