The Franco-Swiss architect Le Corbusier, in 1950 he received the contract to build a new chapel to replace the center of pilgrimage of Notre-Dame-du-Haut in Ronchamp, near Belfort, destroyed during the Second World War.

The interior of the chapel seemed “a mountain cave without.” The exterior shape suggests a more modern sculpture in a temple, but the idea was accepted by the church.

Since its construction has been one of the buildings most praised of this architect.

Situated on the hill Bourlémont, a few kilometers from Belfort, the chapel of Notre-Dame du Haut from the heights overlooking the small town of Ronchamp.

There were always places of worship there. Pagan temples first, then churches and a chapel.

His idea was to build an enclosure in which the material is presented in all its purity. A place to meditate and where the sound and the spaces prominence acquired were free of any additions.

Sought a dialogue of matter and light. The dominance of the curves and the kit makes the Ronchamp a single work. The contrast in color between the walls and the deck joined the curvilinear motion of the elements and the elevation of the deck with respect to the walls makes the play acquires a spirituality and an elevation insurmountable. Le Corbusier took five years to build the Ronchamp, was one of the projects they worked more deeply, to follow staff works.

This book is the supreme exponent of one of the two extremes between which displays the personality and thus the work of Le Corbusier. Here is the Cartesian thinking, program disappears, leaving in place an intense lyricism based on the voluptuousness of the masses and built the formal freedom.

The south tower of the chapel can be seen from afar as we approach the Swiss border.
The profile of the deck, inverting the curve of the ground, and a simple dynamic gesture, gives the membership an expression inevitably tragic.

Far from being monumental, the building has an ethereal quality considerably, mainly as a result of the misleading nature of the walls. However, the deck and walls bend and stretch in various directions..

Inside the west wall windows are chamfered to the point that from inside the area takes the appearance of grid. Through this grid abundant daylight penetrates the interior and the overall effect is a diffused light that, from anywhere in the congregation, the light is projected as a Baroque church.

Imitating the collapse of the deck, the concrete floor descends towards the comulgatorio that appears to indicate the main route up the area.

The wall adjacent to the stairs of the gallery of the choir is painted a liturgical purple and white finish on the chamfer of the holes do to win the purple wall thickness of three inches, thus resembles the frameworks of the painted windows of the houses on the Mediterranean coast. The small green and yellow surfaces are painted on the finish on each side of the main entrance and also to reveal the hole that contains a statue of the Madonna pivoting. The only large colored surface is intended for the chapel and the tower Northeast, it has been painted in red across its height so that the light, descending from on high, providing this surface brightness of the day.

The three towers that receive the sun at different times of day and give birth to the altars are in fact vertical extensions of each side chapel.

It is not basically a block of concrete, but has all the appearance of a solid object. The walls, however, are constructed of heavy masonry.

The initial idea of shaping the structural form of a tubular metal frame wrapped with a wire mesh on which the concrete was being planned, for some reason was not carried out. No change in the idea, this form was filled with masonry, and revoked the white finish with the appearance of the initial idea.

The interior of the west wall was interrupted by the windows so it was necessary to embed into the masonry shell of a concrete for shaping the contour of the hollow windows.

The finishing of the walls has been done by hand and has a rendering of two inches.

This suggests finishing a category of weightlessness and gives the appearance of cardboard wall-rock.

The material difference between finishing the walls and the concrete deck of conventional natural maintains the distinction between them. They differ most in the south and east side by a continuous strip of glass nine inches, and while the cover is not visible from North and West side, its contour is suggested by the outside line of facing.

The white finish is applied at home and abroad
The altars are built with concrete blocks and precast polished. 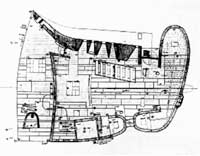 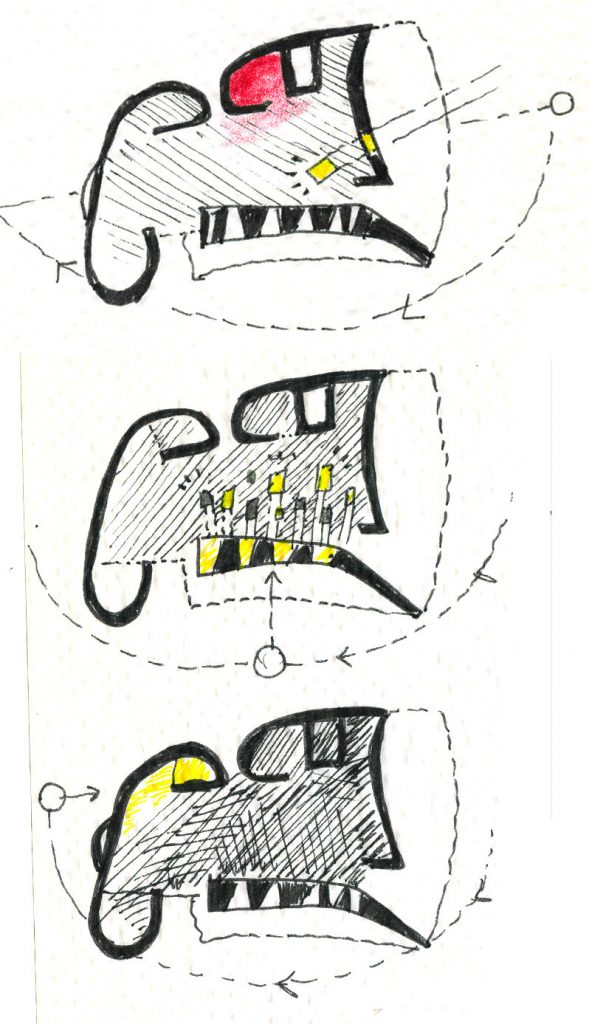 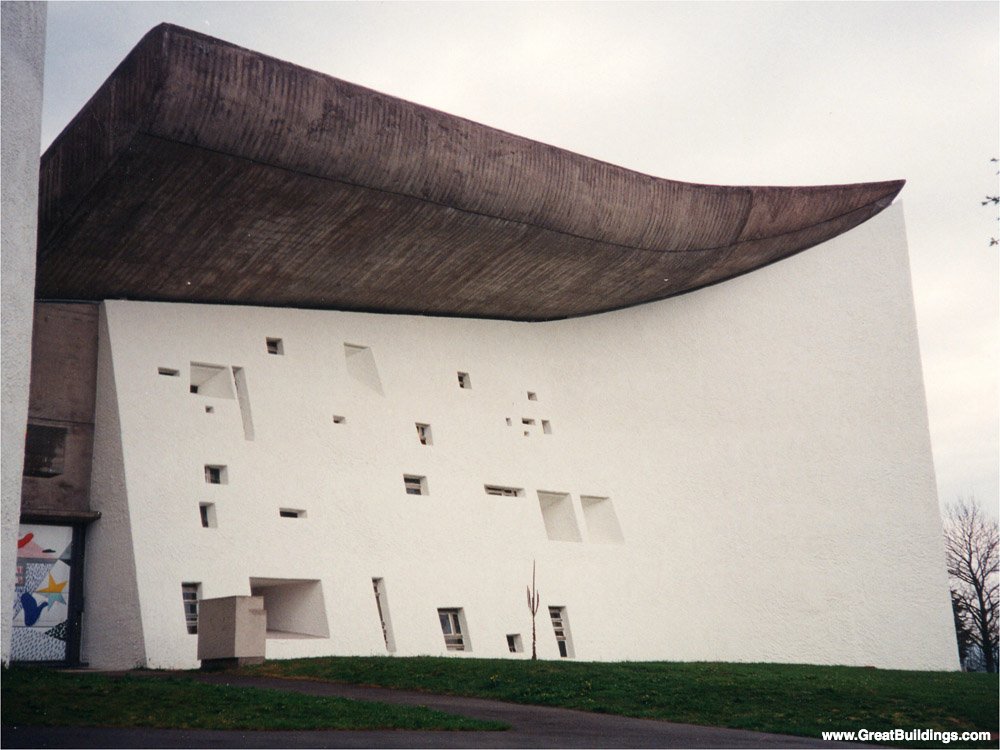 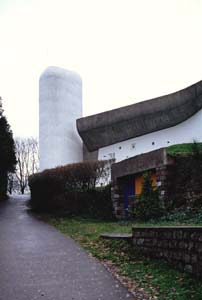 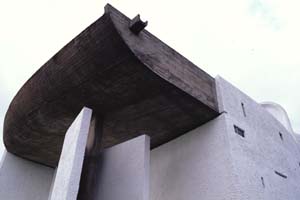 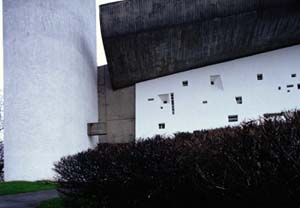 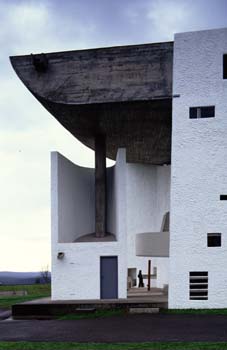 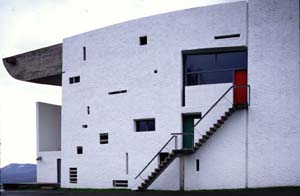 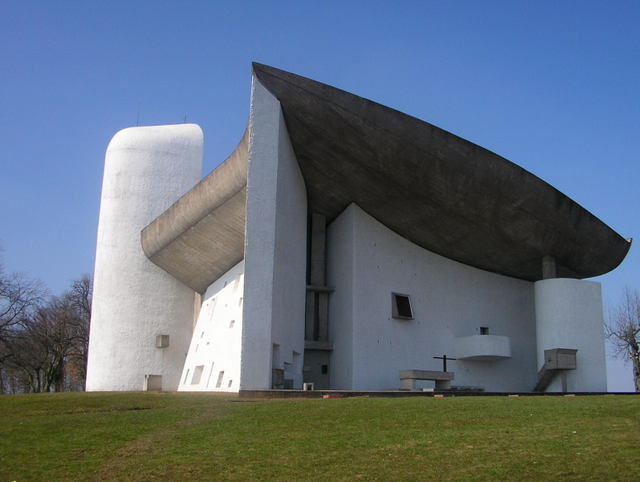 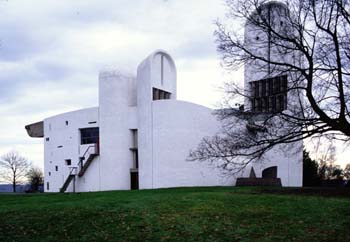 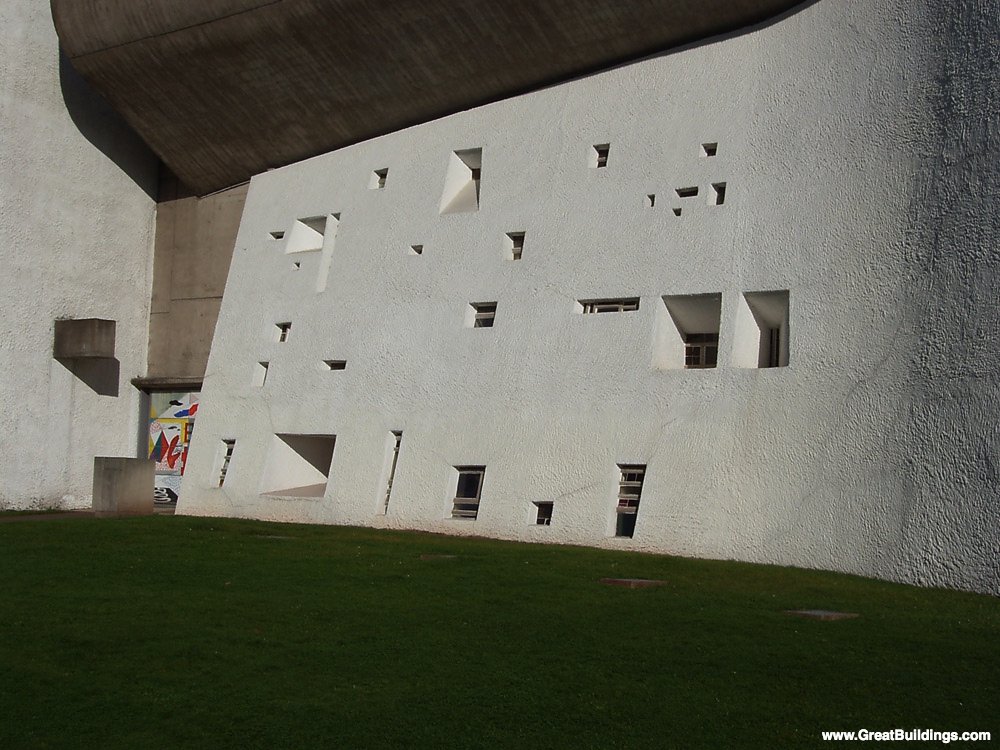 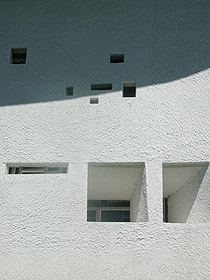 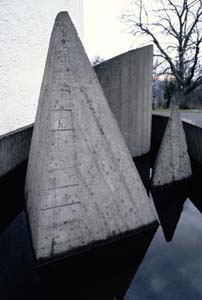 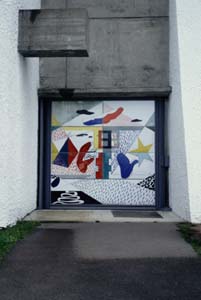 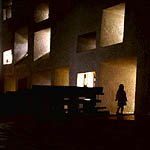 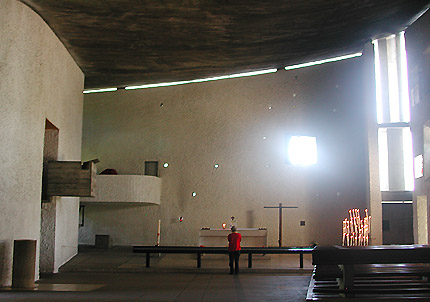 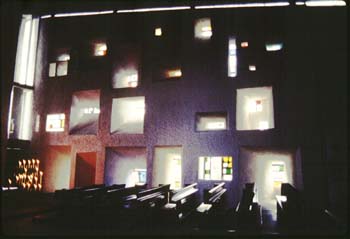 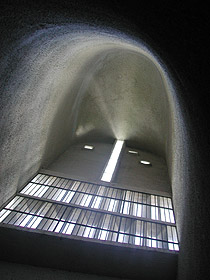