The Open Air School on Cliostraat Street is part of a series of schools that were mostly located in the countryside and were intended for sick children, to help them gain strength with the help of the sun and fresh air. Duiker designed the first outdoor school for the healthy child in the inner courtyard of an urban block. To meet the requirements of hygiene and optimal penetration of sunlight and air, the architect minimized construction, a working method that is characteristic of the Dutch Modern Movement, Nieuwe Bouwen.

Since the early twentieth century, outdoor schools have been built to help physically weak children gain strength with the help of the sun and fresh air. In 1927, Duiker and Bijvoet were in charge of designing such a school in Amsterdam-South. Raised in the inner courtyard of a perimeter block, it was preceded by five preliminary plans for several locations.

In the Open Air School, the ideals of modern architecture, light, air and space have been reached in an uncertain way. It joins the Zonnestraal factory also of Duiker in Hilversum and the Van Nelle Factory of Van der Vlugt in Rotterdam as one of the masterpieces of this type of architecture in the Netherlands.

The school was built in the inner courtyard of an apartment block located on Cliostraat 40, in the municipality of Amsterdam-Zuid, Amsterdam, the Netherlands.

Starting from the concept that the physical training of children is as important as the intellectual Jan Duiker organized the classrooms in such a way that they receive abundant natural light and sun. In turn, the terrace shared by the classrooms of the upper floors, which is also used as a classroom, is accessible as many months a year, in good or bad weather, since it is covered and protected from the wind.

An inspection carried out in 1948 certified that the school satisfactorily met the required conditions, from the pedagogical, hygienic and physiological point of view. Although scientific research has shown that fresh air increases disease resistance, outdoor school has not become a common typology.

Originally the main building of the school had seven square classrooms, 7.80×7.80m and a height of 3.40m, one on the ground floor and two on each of its three upper floors, with a sunken gymnasium under the classroom of the ground floor to reach the necessary height. Three of the walls of the classrooms are glazed, the fourth that serves as support for the slate and where the entrance door to the classroom is also located is the only one from floor to ceiling masonry. The other material surface is formed by the walls on which the windows that have a height of 1.20m are supported. The access windows to the terraces open in all its width. In the small distributor of each floor and in front of the stairs the doors of the toilets are located. The building is crowned by a terrace.

On the southern face of the block, a low portal was built, probably in 1932, which was modified many times, altering its original “airy” character

Currently, access from Cliostraat Street is flanked by a low and transparent block of houses that allows you to see the school from the street and a baby room built on a bicycle shelter. An entrance pavilion and a “bridge” were built that houses classes for recreational activities.

Once the school building was built, the inner courtyard remained with an asphalted surface of 1,350 m2.

Between 1937-39 the ground floor was enlarged, a handicraft classroom was added and in the mezzanine an annex to the director’s room. The project was in charge of the architecture studio J. & P. ​​Cuypers.

In 1955 A. Komter renovated the main building.

In 1986 the architect J.M. Peeters radically modified the portal, the director’s room became a space for babies and a new staircase was added.

In the years 1993 and 1994, the original slenderness of the building was partially restored and the original color scheme, white, black and the so-called “Duiker blue” was restored.

For this open-air school, Duiker used a reinforced concrete skeleton with reticulated jácenas, some in cantilever, which rely on exempt columns inside every 9m avoiding the transmission of cold and large rows of windows that can be opened completely so that Students can enjoy as much time as possible outdoors. The school consists of a square block of classrooms with four levels, located diagonally on the site. This basic floor is subdivided into four quadrants around a small hall with a central diagonal staircase over one of them. The east and west quadrants contain one classroom per floor and share a terrace or outdoor classroom on the south side. On the ground floor the north quadrant is occupied by a staff room, the west by a classroom and also the main access located under the outdoor terraces. Under the block of the classroom and sunk to reach the necessary height the gym was placed.

The concrete columns are located not in the corners, but in the center of the sides of the quadrants, which produces a favorable distribution of forces in the beams of the facade, keeping the corners free of columns and strengthening the open and floating aspect from school. Cantilever floor slabs on the main beams result in a counterweight. The columns are also diagonally coupled by secondary beams that express the diagonal spatial composition of the classrooms on the ceiling.

The distribution of the forces of the structure is demonstrated through the columns and beams. With the exception of a low concrete parapet, the facades are fully glazed and equipped with revolving windows with steel frames that allow the classrooms to be opened completely. The concrete floor slabs contain central heating pipes at the bottom, installed during the pouring process.

Jan Duiker opted for a concrete frame and thin steel window frames, with a large amount of glass. The sills are also made of concrete and are insulated from the inside.

To heat the classrooms the architect resorted to radiation in the ground, passing hot water pipes through the concrete slabs and insulating underneath with cork panels. That way you can open the windows in winter. This system was replaced in 1955. The metal windows, with simple glass, are open on the south side of the wind-protected building.

In the living room the clothespins were attached to the heating pipes so that they were hot at the time of use.

The columns, walls and ceilings were painted white, the doors blue. 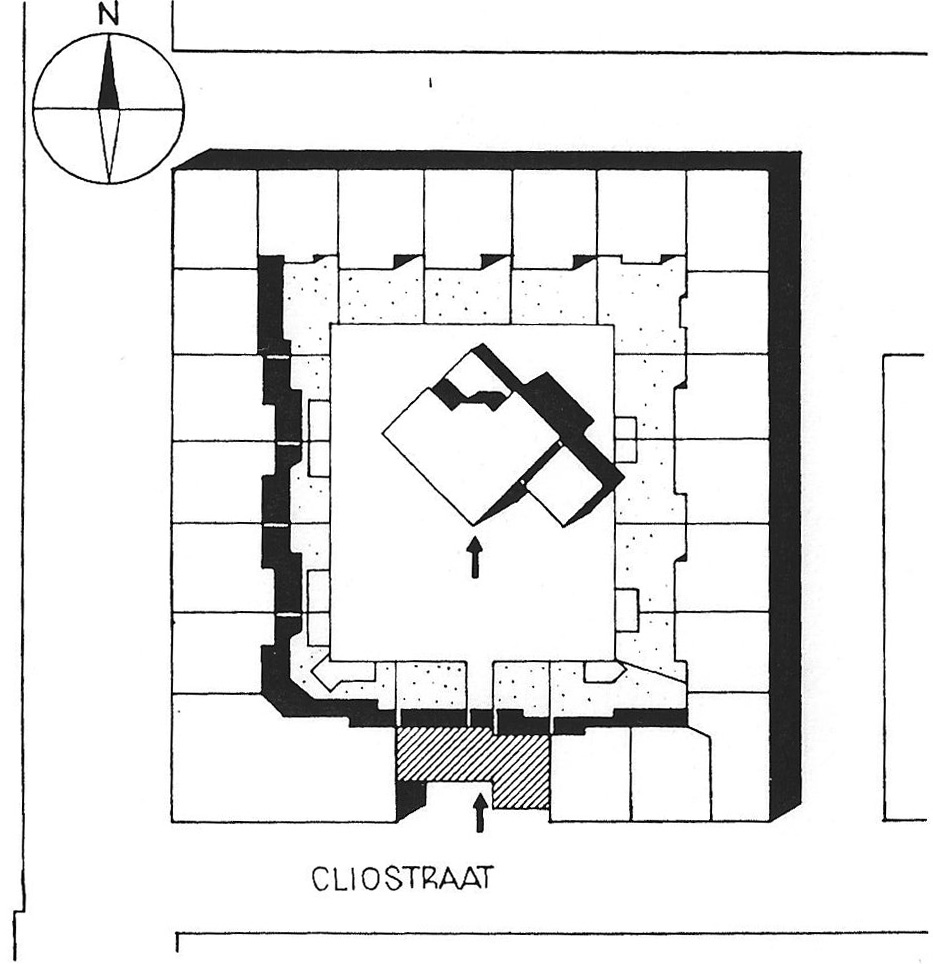 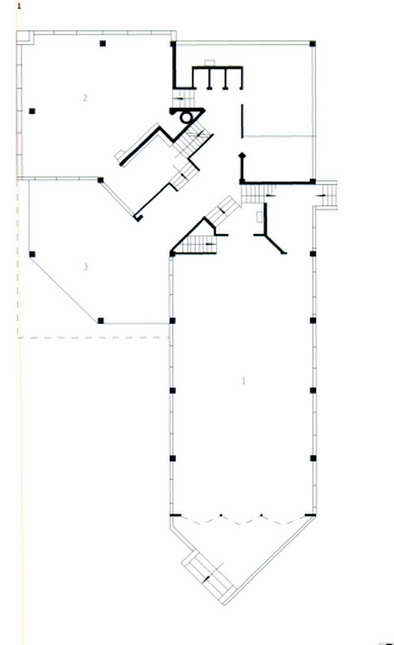 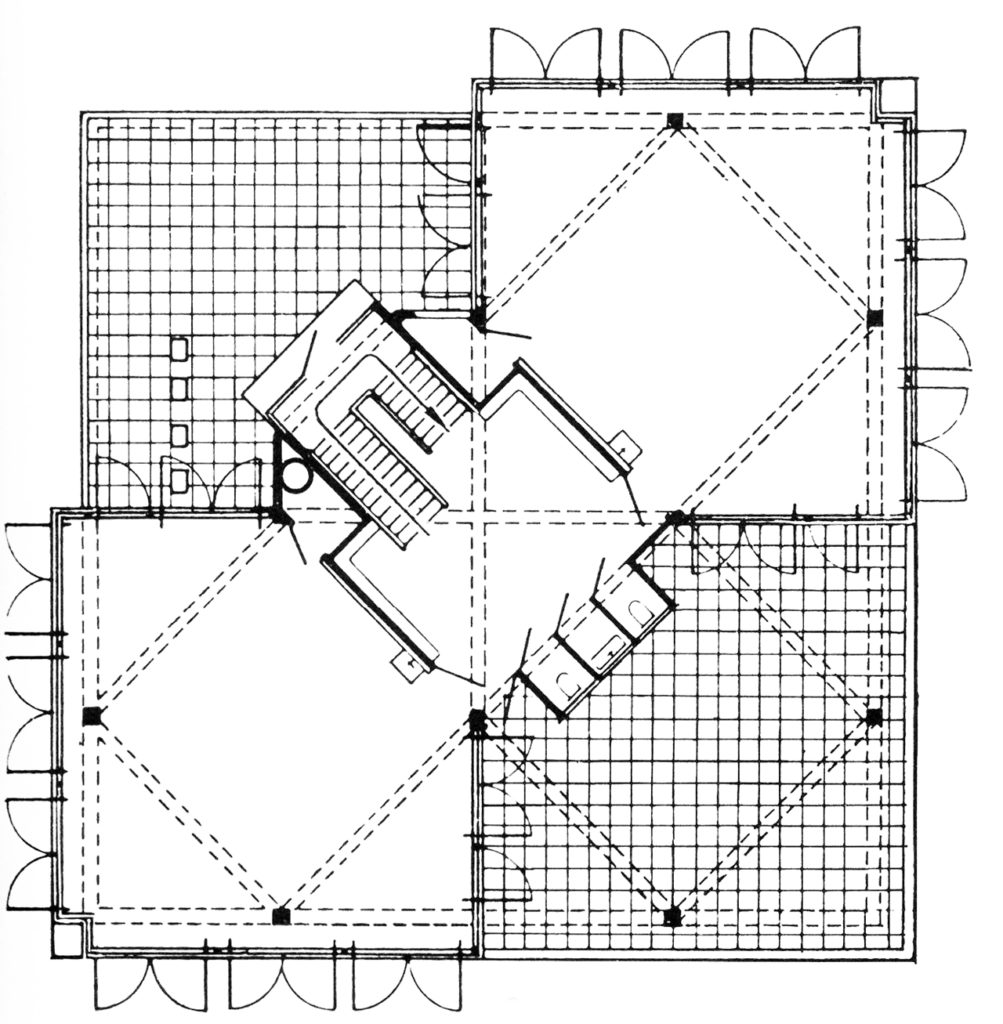 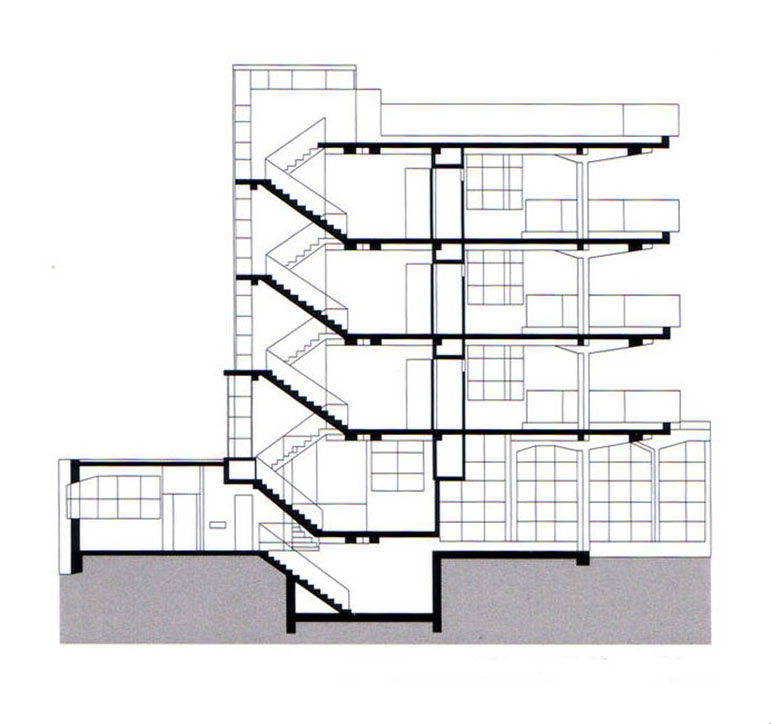 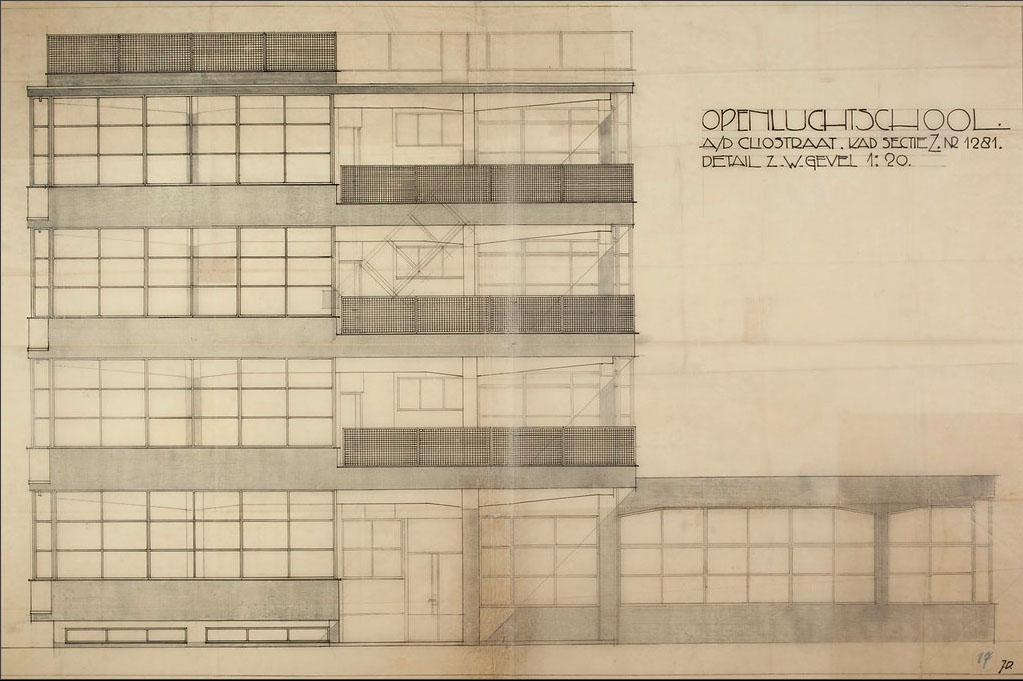 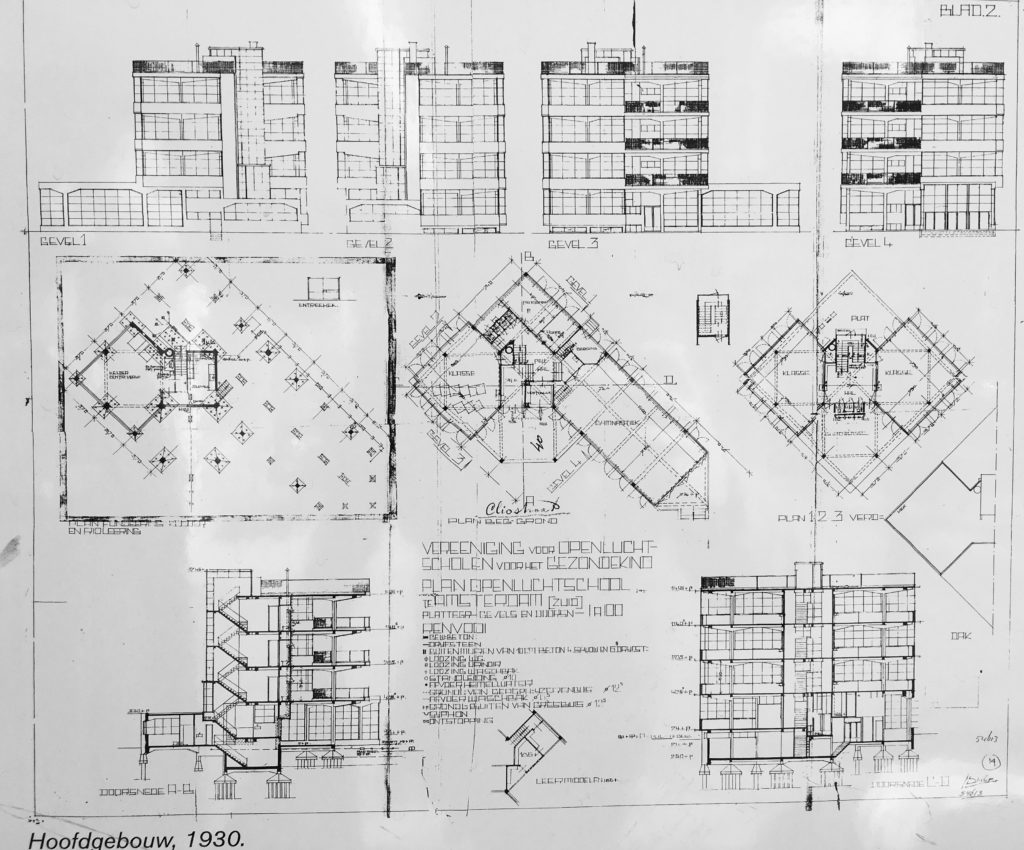 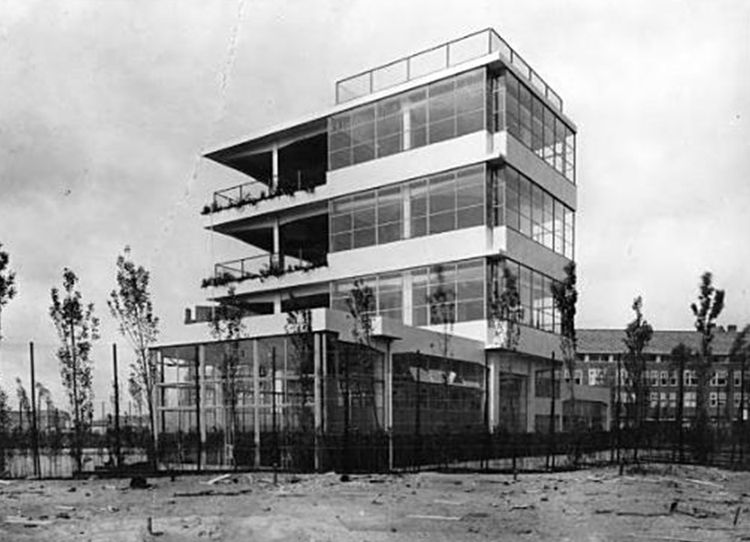 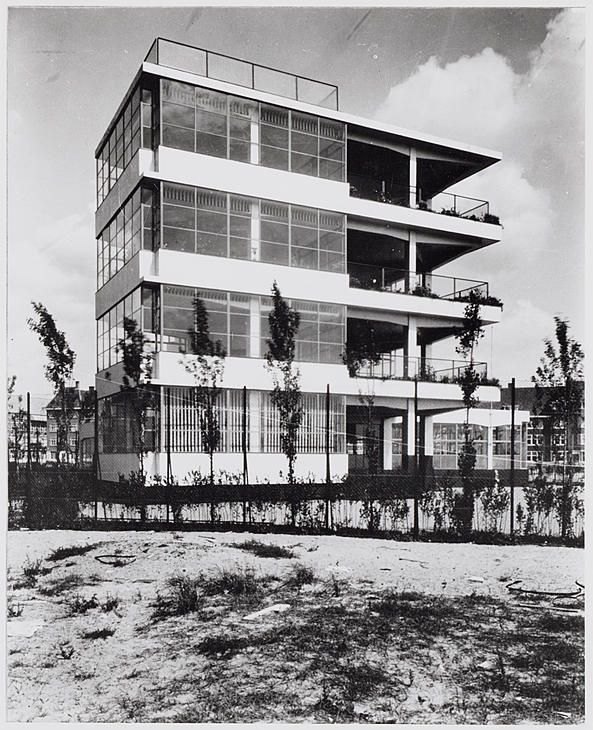 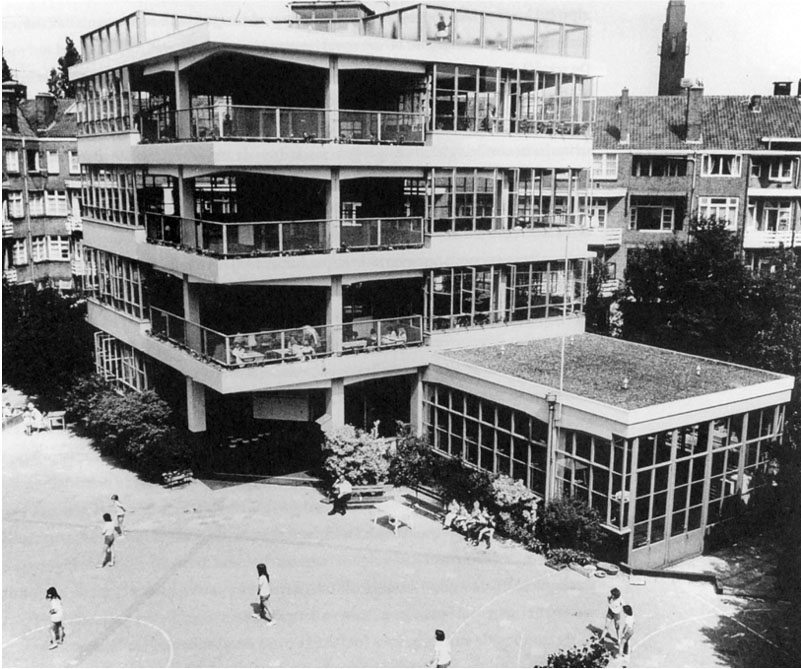 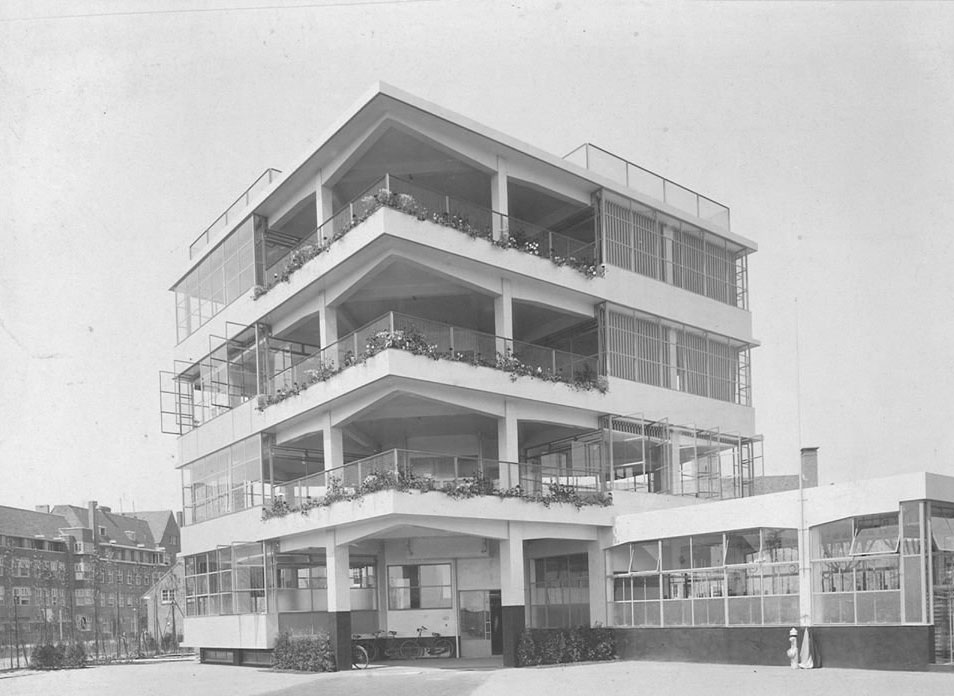 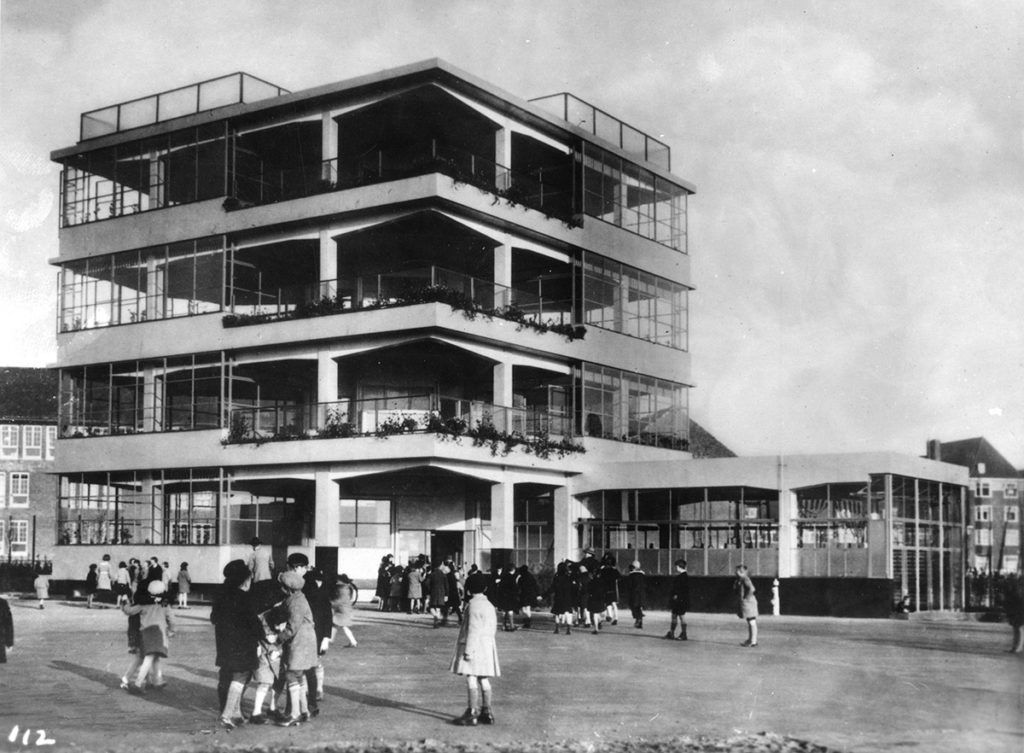 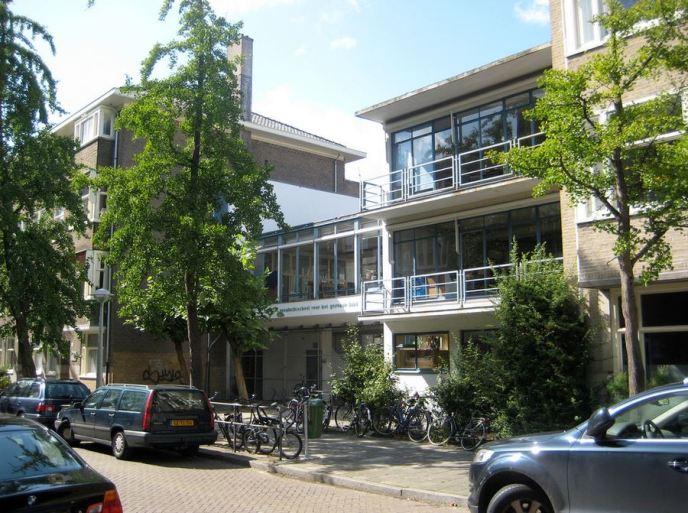 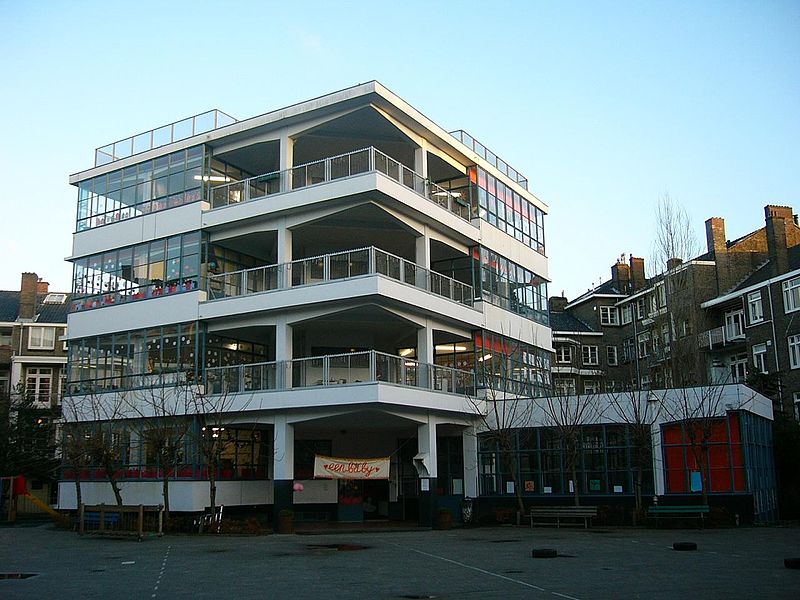 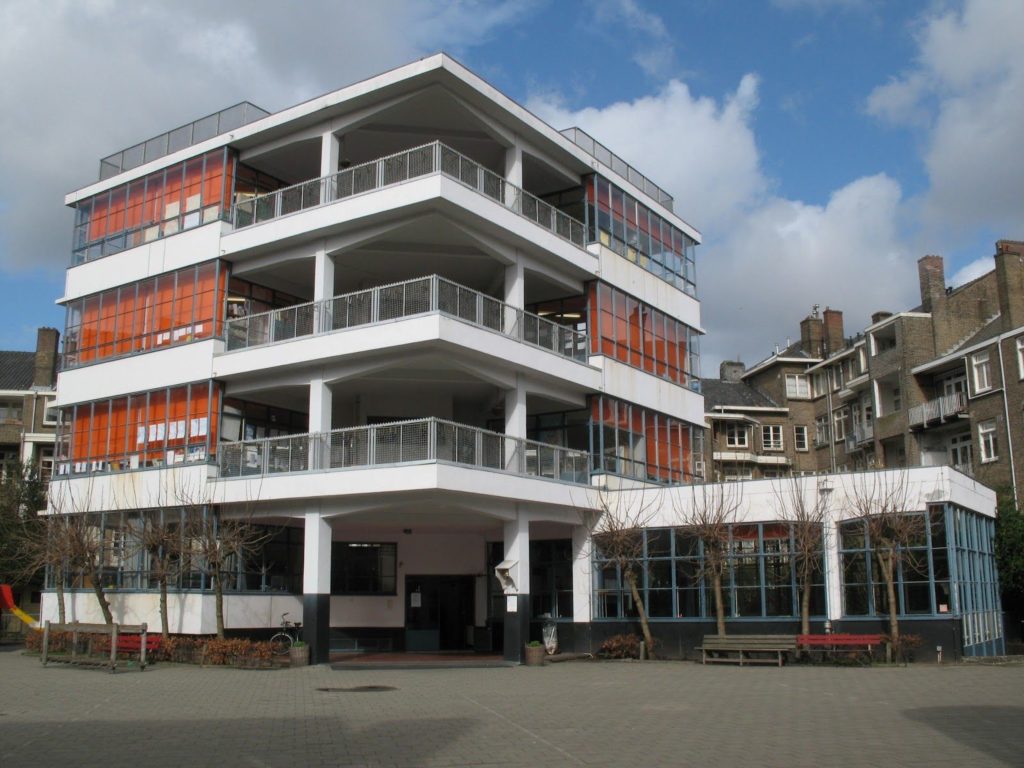 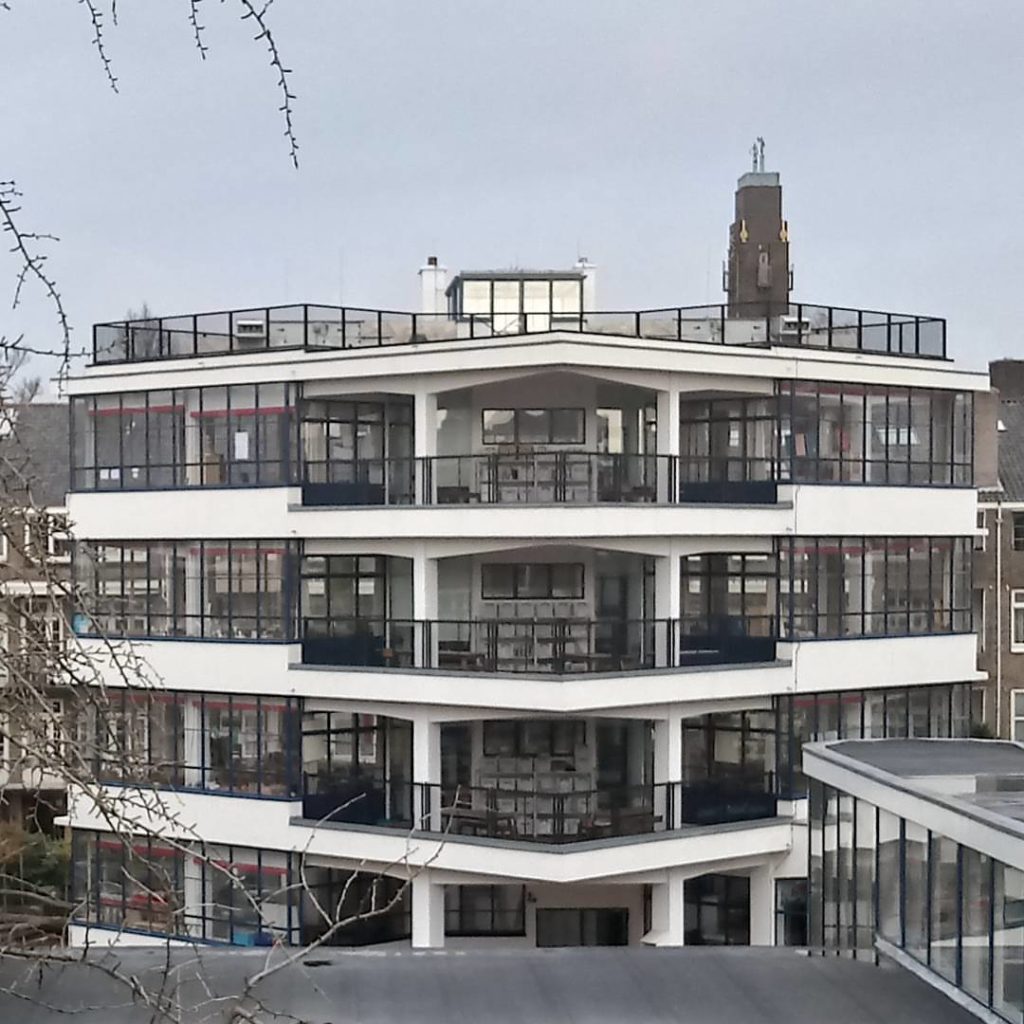 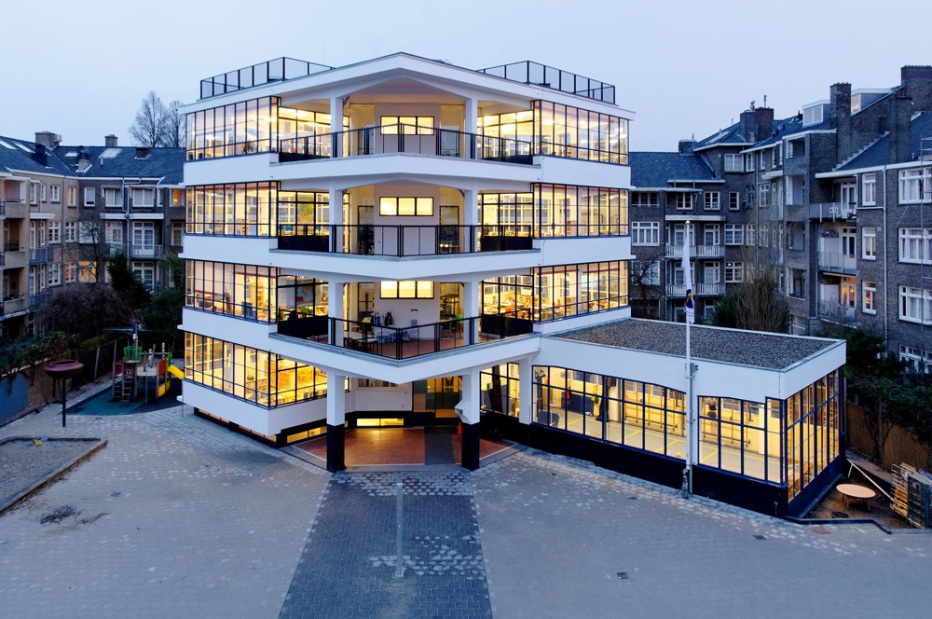 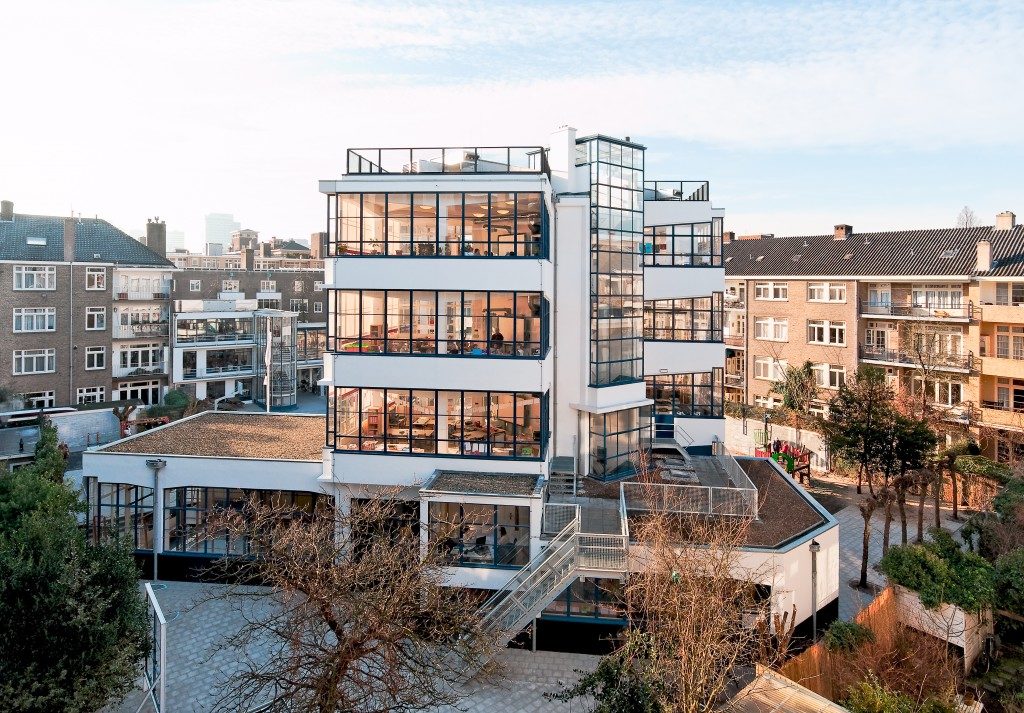