Alexander J. Chandler, one of those responsible for the success of the zone Phoenix, contacted with Wright in 1929 to design the “San Marcos in the Desert” hotel. Wright designed and built a camp in the desert to plan future hotel that would arise in the same place. the camp called Ocatillo was a temporary building constructed during the winter, an experimental place in the Arizona desert. the camp itself was designed by Wright in a day and within 6 weeks they raised small buildings that formed it, according to the “tenthouses” (tents). Wright’s team built the camp in January 1929 and lived there until May, dealing with the heat of the place, the rattlesnakes, tarantulas and scorpions. With the finished project Wright left for Taliesin.

The site for the complex consisted of 567 hectares, south of Phoenix at the base of the South Mountains, mountain range in the center of Arizona, United States.

The cottages were built around a hill, leaving its center and highest free to have an uninterrupted view of the desert part. The same topography impedes the vision of a building to the other, creating some privacy.

Wright called the camp “Ocatillo”, name of the giant shrub that grows in the desert area.

Lift the experimental camp responded to the desire for Wright to contact with the environment where the future project would rise, experiment on site with materials and shapes that best adapt, communing with nature in the most possible aspects, whether architectural, topographic or organic.

The buildings were low wooden walls with white canvas roofs angled to capture the desert sun and harmonize with the mountain scenery. Wright compared the camp with a fleet of sails in the desert and the photos were published in architectural journals worldwide.
Equipment designers Wright worked in buildings equipped with canvas chairs, cots and mats Navajos.
For building construction materials they used dry. The cabins that were the settlement were built with low walls of redwood boards, nails and screws, forming angular enclosures without any symmetry in its location within the site. At Camp Ocatilla a sample of what would be large-scale textile blocks for the future construction of the complex was built. Frames for sealing joints and rubber strips were used.

Each construction available a unidirectional forged formed in pairs on the rocky ground, above ground wood planks and beams at an angle, also of wood, covered with a white canvas placed. The low walls that form the perimeter of the cabins were also horizontal wood, accompanying form the outer wall of the camp. Below forged tubes were passed to a septic tank.

the principle was applied cross ventilation chimney effect obtained by leaving a small opening at the base of the side walls and the passage of air through the canvas functioning as cover.

With the construction Frank Lloyd Wright wanted to adapt to the environment so it based the geometry of the cabins at angles of 30 and 60, making them match the slope of the nearby mountains and the hillside itself where they rose.

In the same year that Wright broke camp and in the city of Phoenix opened the Hotel Arizona Baltimore, designed by the architect Albert Chase McArthur. McArthur placed “textile blocks” as a front what Wright considered a defect because he thought they should be structural. In his new project he used them that way and to demonstrate their performance built a plaster model in Ocatillo. The reasons for these blocks were inspired by the ribs of a saguaro cactus, symbol of Arizona.

San Marcos in the Desert

The monumental hotel San Marcos in the Desert offer beautiful views of the surrounding landscape. Located in an area of ​​567 hectares, in the hills of South Mountain, the hotel was to be built on the hillside, with three terraced floors for guest rooms. Guests who arrive by car, below the main lobby, following the course of a ravine.

In addition to the structural blocks, glass blocks that allow the natural light to be used. The geometric design of the building was destined to guests focus their attention on the desert, the decor would be mainly copper and glass, again repeated geometric shapes. Each suite have two bedrooms and two bathrooms with tapestries whose pattern coincide with architectural forms. The roof of each terrace level would serve as a garden for the upper level.
In the hotel roof terraces each level serves as a garden for the upper level.

Irregular triangular patterns within the hotel creating unique spaces. Each room had a large fireplace in the western wall. At the highest point it reached 6m hotel roof. The ceiling in the dining room was decorated with copper plates and terrace levels were adjusted to resemble a tree. Skylights pierced the ceiling in all central hotel stays. 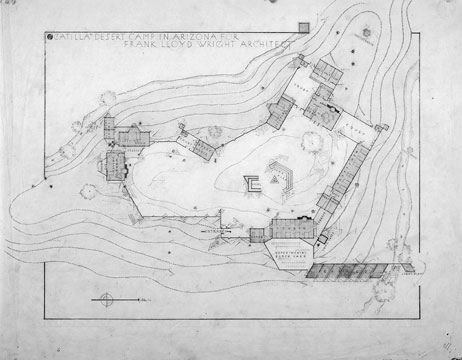 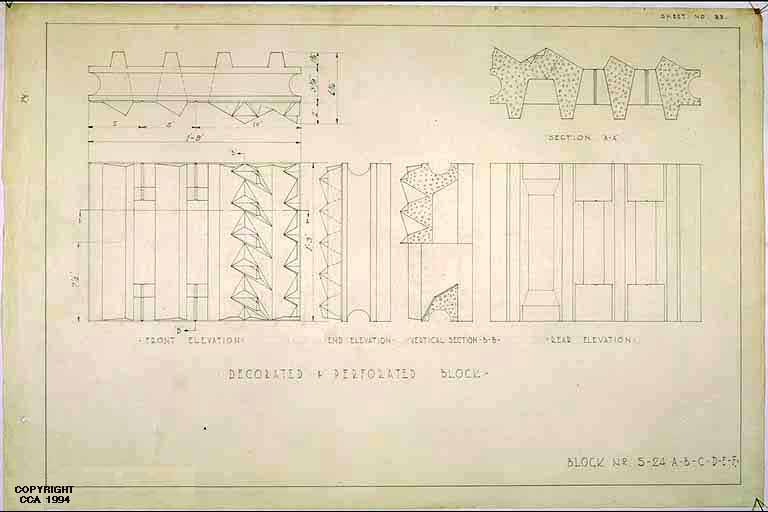 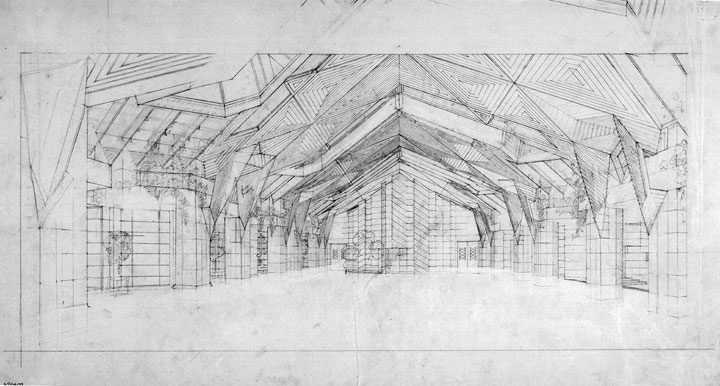 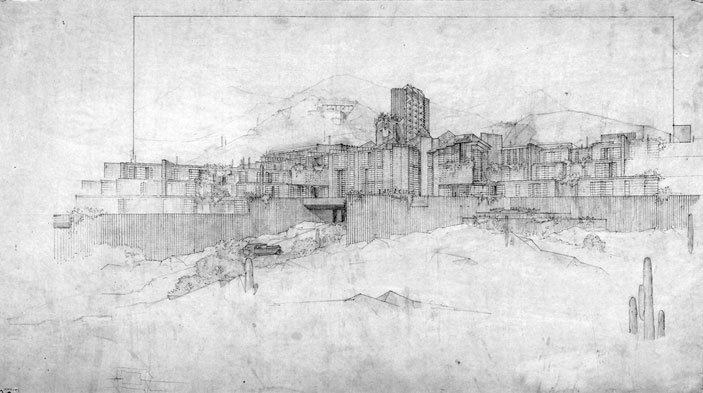 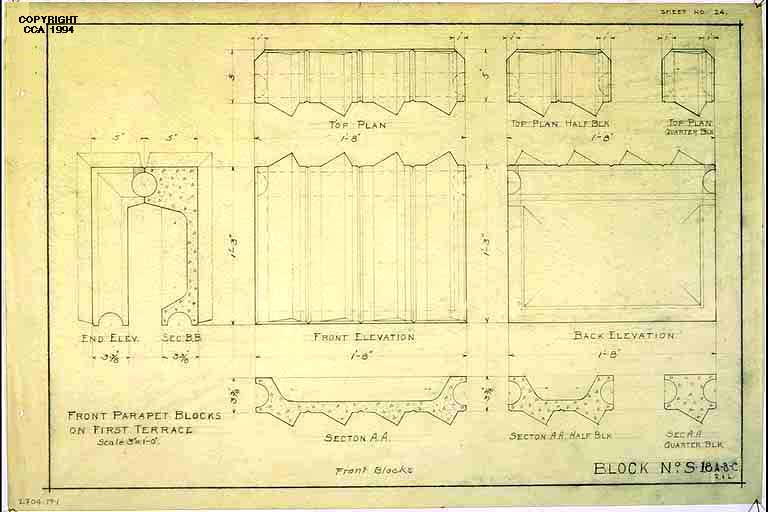 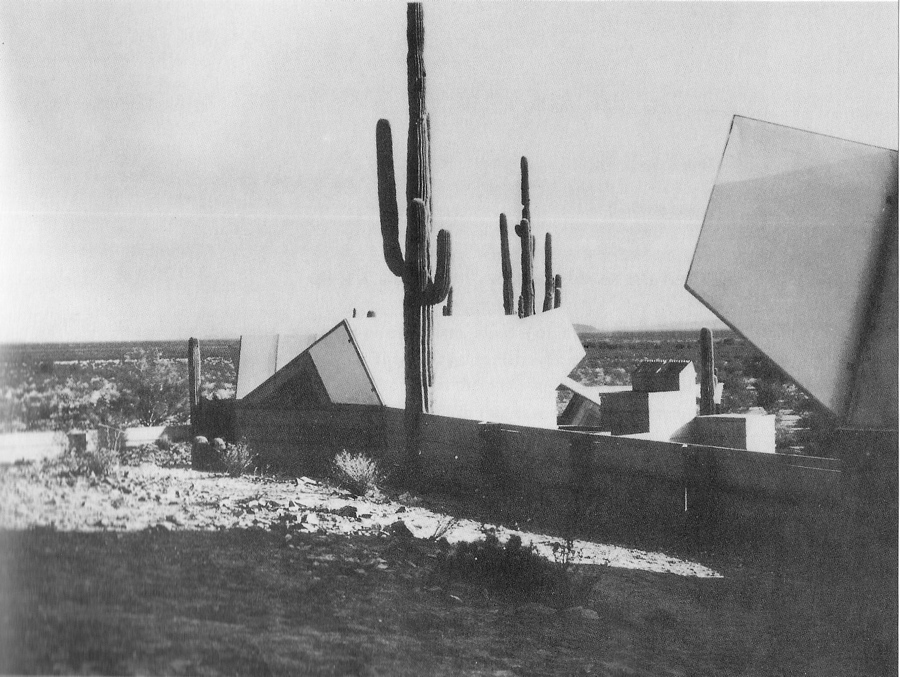 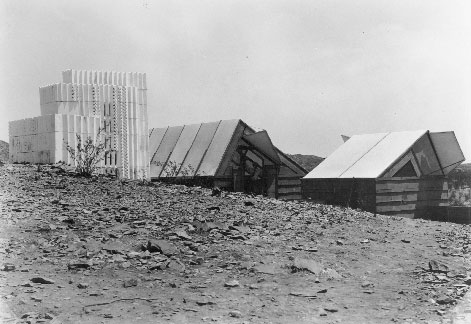 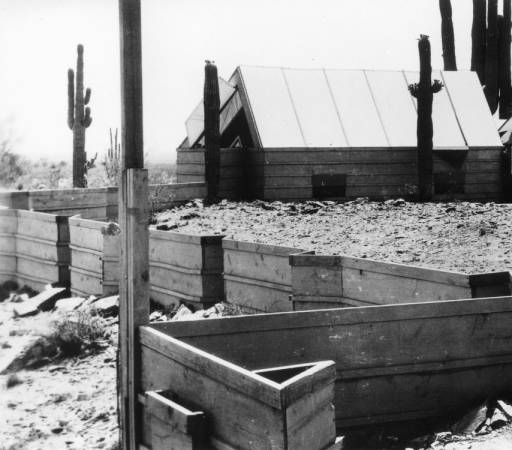 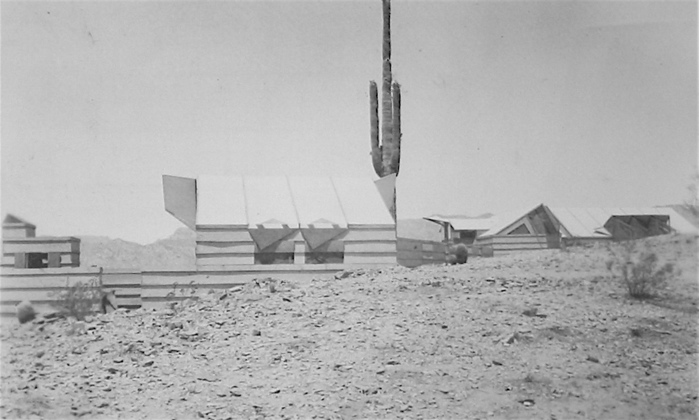 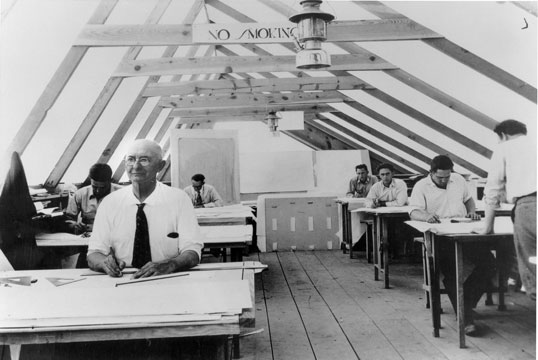 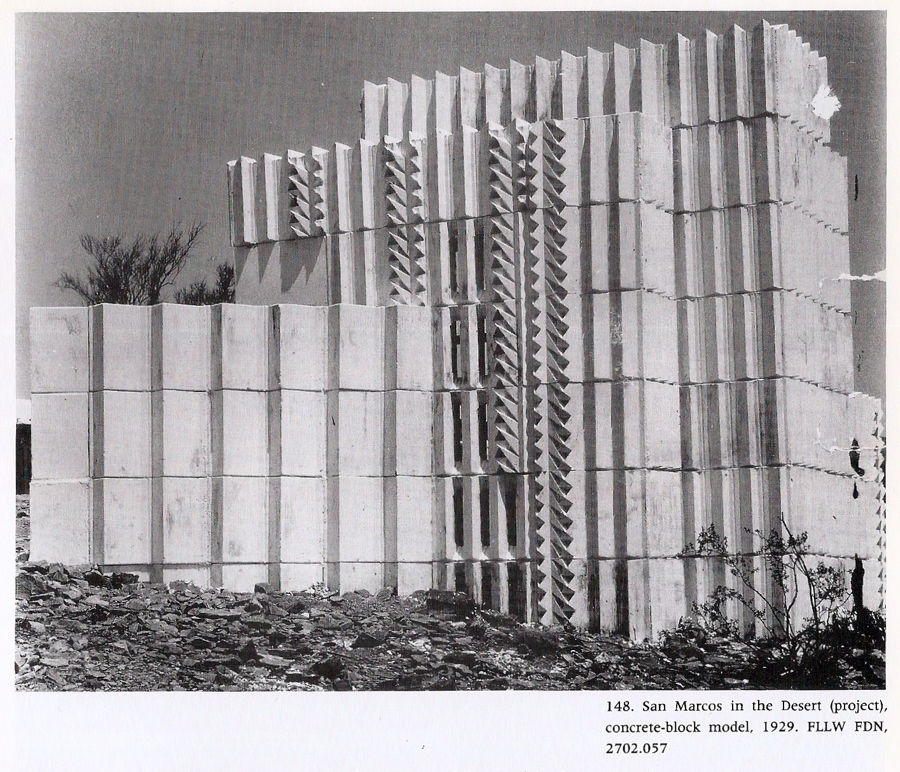 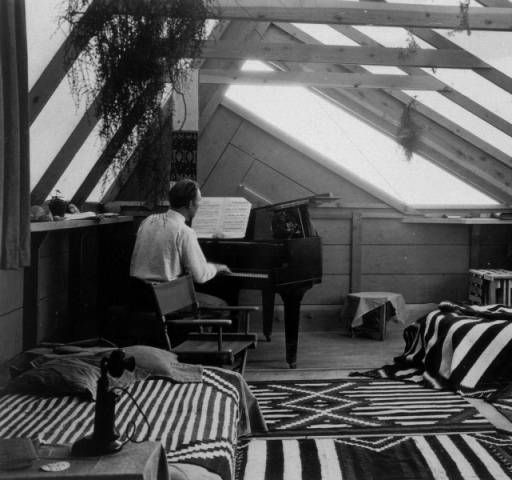 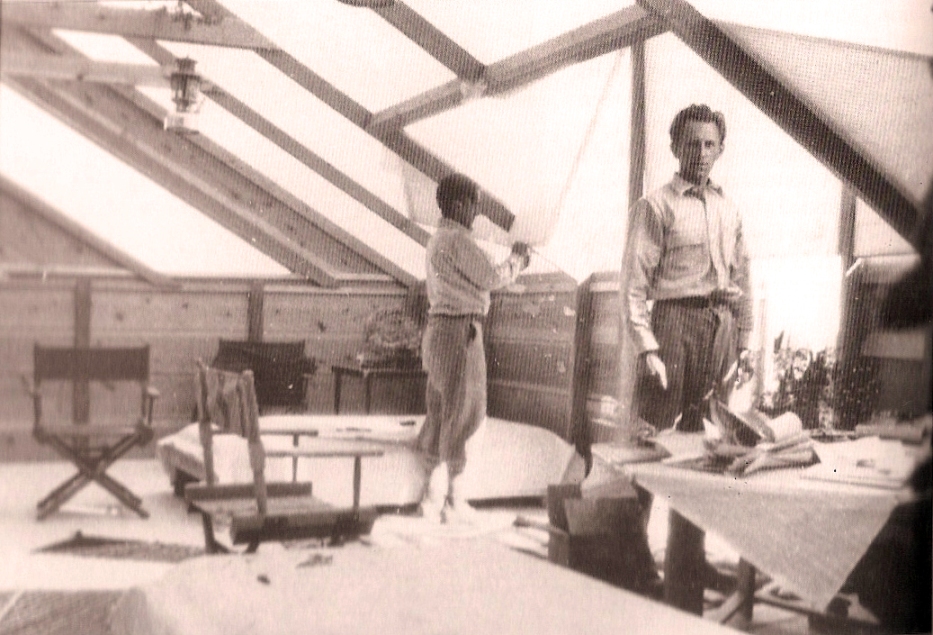 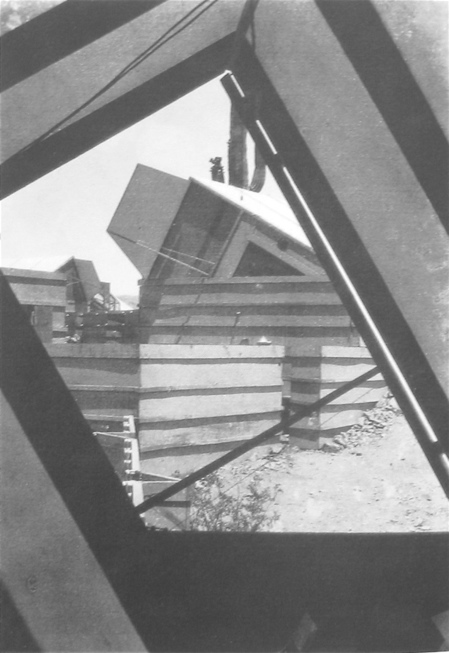 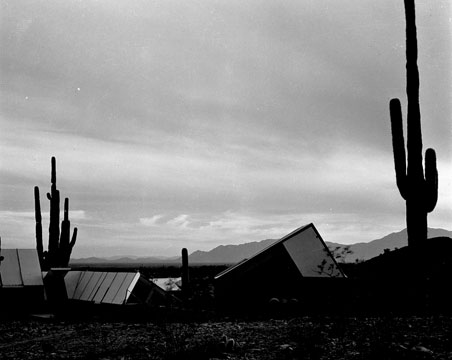