Winner of an international design competition, this prestigious project designed by Carlos Ott of Norr Architects is the headquarters of the National Bank of Dubai (in Arabic بنك دبي الوطني) which was renamed Emirates NBD.

The triumph of this building is not its height, 125 meters, a factor of great importance in this part of the world, but its proportionate enforcement. Although not among the highest, the building remains one of the most important projects of Dubai.

Built in the mid-90s, the building was one of the first modern buildings, deliberately iconic, city, setting a standard that few of his many successors have been met. Together with its neighbor, the telecommunications tower Etisalat, the headquarters of the National Bank of Dubai defines the original skyline of the financial district of Dubai along Cove Creek.

The building is located in the eastern part of Dubai, Baniyas Road, in the heart of the old town and along the historic City Creek in Deira, being the tallest building in the place and fifth in Dubai when built in 1998, UAE.

Deira (Arabic: ديرة) is an area of ​​the city of Dubai, bordering the Persian Gulf, Sharjah and Dubai Creek. Historically, it has been the commercial center of Dubai, but has been losing its importance in recent years due to the recent development along E 11 highway (Sheikh Zayed Road) and other areas of the coast toward Abu Dhabi. 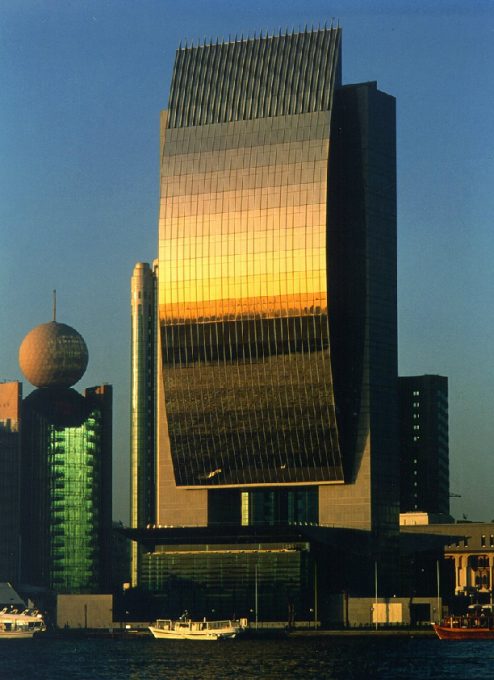 Its unique design, gold coated glass and gray granite suggests the shape of a sail “hulls”, spinnaker, or the curved hull of a “dhow” traditional sailboats in one or more used in the Indian Ocean masts and docked at Dubai Creek, symbol of Dubai commercial tradition and distinctive for the bank. This concept also inspired the form of Burj Al Arab.

The base of the building, the lobby of the bank, is coated with blue-green glass, representing water and aluminum roof evokes the hull, the sail is represented by curved glass curtain wall.

Located along the busy waterfront, the facade reflects the sky and water in its curved mirror. The reflection distorts the image captured giving the building a fleeting appearance, but the most striking spectacle is at dusk when the sunsets painted shades of gold and silver that shine in the curved mirror.

The building, home to the bank, with 24 floors including offices and spaces for banking services, underground parking for staff. Its front convex glass captures the movement of the activities that take place inside and reflected in the Creek. It has become one of the most recognizable structures in Dubai.

The main hall and negotiating space is located on the ground floor, under the metaphorical helmet “dhow”, projecting towards the front and rear of the building. Curved aluminum roof of this lobby follows the shape of the glass candle, rotating horizontally to represent the hull of the “dhow”. Based crystals, blue, represents the sea.

Above, separated by a vertical gap of 9m from the trading floor are the offices. These plants, coated with gold colored crystals swell out, referring to a wind driven sailing.
The forms are simple and powerful, in particular the relationship between “town” and “candle” which is an elegant interpretation of the model set of blocks and slabs. As a bank, however, definitely belongs to the era of communication of power and wealth, rather than something more personal.

The building suggests a composition of two parts, the support core coated cores stone and building services. The curved glass volume seems suspended from the volume of stone, highlighting its form dinghy. Volume curved ends with vertically hinged flaps.
The base is composed of a podium that houses shops and restaurants. The language of convex arcs and simple arcs indicates expression of the roof of the hall, which seems to float above the base of the building.

Unusual in a tower of this size, the nuclei of the primary structure, circulation and service are pushed toward ends and outside of the building, leaving an unbroken light of 30.50 meters between them. In this vacuum hanging 16 floors of offices of the bank, supported at its ends by the structural units formed by two huge granite columns, escorting a covered facade, on the east side of the Creek, with a curtain wall of glass in bronze tones gracefully curved, like a billowing sail.