If we look at the history of architecture since its beginning, say from the time of the pyramids to modern times, and make a list of the most significant buildings, it is likely that the National Assembly of Bangladesh (also known as Sher-e-Bangla Nagar) will occupy quite a prominent position. One could say that it was the culmination of the modern period of architecture and the beginning of the post-modern era.

The decision to build the National Assembly of Bangladesh in Dhaka city was originally made in 1959. The administrators of martial law planned to build the current Sangsad Bhavan as a second seat of parliament of Pakistan on the proposed zone as the second capital, Sher-e-Bangla Nagar.

Kahn, one of the great architects of his time, was originally selected to design the compound of the National Assembly. He was not charged directly, but the project was put to the public to submit preliminary ideas for the complex and in March 1962 he was awarded the project officially.

An extension of 208 acres north of the current Manik Mia Avenue was destined for the draft’s second capital in 1961 and the masterplan was completed in 1962. Construction began in 1964 with an initial cost of $15 million. The main structure was under construction in 1971 when war erupted in the area and all work stopped. In 1974 the government of Bangladesh made the decision to terminate the project under its original plans. The construction of the complex, along with all its services and facilities, was completed and inaugurated in 1982 at a cost of $32 million.

The biggest criticism that has gone to the building has been for its exorbitant construction, especially in maintenance. The total cost of the complex (including the parliament building, the plaza north, the plaza south, residential buildings, hotels, gardens, streets, lakes, etc.) ascended to the staggering figure of $1.28 million. The mega complex has no more nor no less than 50 flights of stairs, 240 bathrooms, 1,635 doors, 335 windows, 300 partitions, and thousands of square meters of glass panels and wood. The annual cost of maintaining these facilities amounted to $55 million.

The building of the National Assembly has been addressed in virtually all publications about architecture around the world and has also been awarded the prized Aga Khan Award for Architecture. The subpoena that follows took place at the ceremony in which it awarded the construction and expresses a very interesting project evaluation:

“Faced with an architecture of so much power, size, clarity and beauty, the jury was unable to avoid questioning the compatibility between Sher-e-Banglanagar with the needs and aspirations of a poor country like Bangladesh. Yet studies on the design and construction of the building revealed that over time it has gained general acceptance and has become a symbol of democracy in Bangladesh, influencing the country in many positive ways. Looking at its architecture spatially, more immediately the building has been able to absorb major archetypes of the region along the street and its extensive gardens and numerous lakes. The architect has managed to reinterpret and transform these ideas along a process that has been able to adapt concepts of construction and technology to the specific conditions of the locality of Dhaka. The result is a building that, while universal in its concept and method, could not be found anywhere else.”

The complex is located in the city of Dhaka, the capital of Bangladesh.

The main feature of the building is its monumental presence. The great mass of concrete lined with strips of marble, marked by the outer wall openings and the predominance of geometric forms of circular and rectangular concrete offer a great tribute to the building, fairly consistent with the noble functions that take place in the interior.

Earlier in his career, in projects like the Jewish Community Center in Trenton or in the expansion of the Yale Art Gallery, Kahn experimented with monumental forms and simple materials such as brick or concrete. His goal was to make contemporary buildings with a universal quality. For the Assembly building, he chose a red brick produced by a local factory. He also used indigenous technologies to equip buildings throughout the complex.

To complement this knowledge of the native methods, Kahn built the building on a human scale. He believed that architecture was reflective of the art of making places, and that’s exactly what is experienced by pedestrians who enter the building. Indoor high streets were built with local materials while the glass windows utilize the latest technology to ensure a comfortable climate. Thus Kahn only alters the factors incompatible with the needs of use as per the temperature and keeps the local environment and the materials.

The intention of Kahn for the parliament was to produce an ideal expression for the new democracy by using perfectly geometric shapes: circle, the half circle, square and triangle.

The complex, once completed, includes the National Assembly building, the plaza north (65,000 square feet), the plaza south (223,000 square feet), hotels for members of parliament, ministers and secretaries, social halls and common buildings, all linked by roads and walkways and surrounded by attractive gardens and lakes.

Building of the National Assembly

The edifice is located on an enormous artificial lake and is connected to the land across the plaza north and the plaza south.

This is a concentric plan, where several functional layers are developed around a main hall where meetings with capacity for 354 parliament seats are held. The plan is born of a square that has been manipulated to reach an octagon. There are nine individual blocks around the hall with nine floors connected between them only through three levels.

An illuminated building seven stories high at the zenith of the assembly hall is surrounded by a bypass road around the town.

There are four identical blocks of offices along with other features in the blocks of the corners. There is also an elaborate system of traffic with different types of elevators.

In the floor situated in the basement is a parking area and the chambers of machines and facilities that cater to the building.

One cannot find a column inside the building. The columns have disappeared inside the divisive elements that have adopted the function of bearing walls. It’s more like a large mass of concrete that has been digging and sculpting itself to achieve a perfect functional entity.

One of the most important considerations to take into account during the project was protection from the sun and heavy rains and at the same time allow the free circulation of air. This was achieved by giving the facades at grade geometric openings in the form of triangles, rectangles, circles and arcs. It avoids any conventional method of placing the windows on the outside as well as the disadvantages of the composition of a typical monument building.

The predominant materials are the concrete and red brick exterior that give the image of the complex. 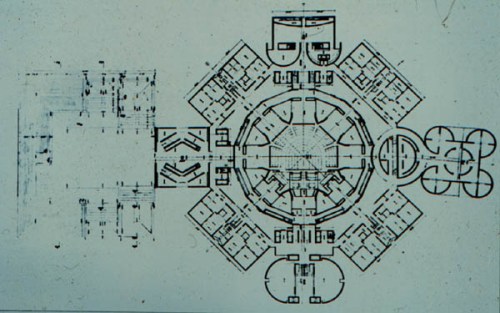 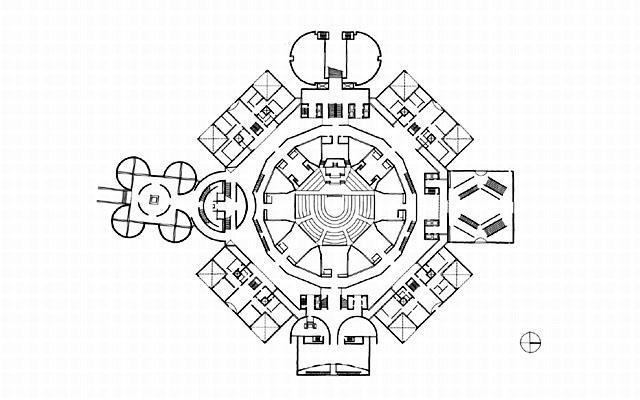 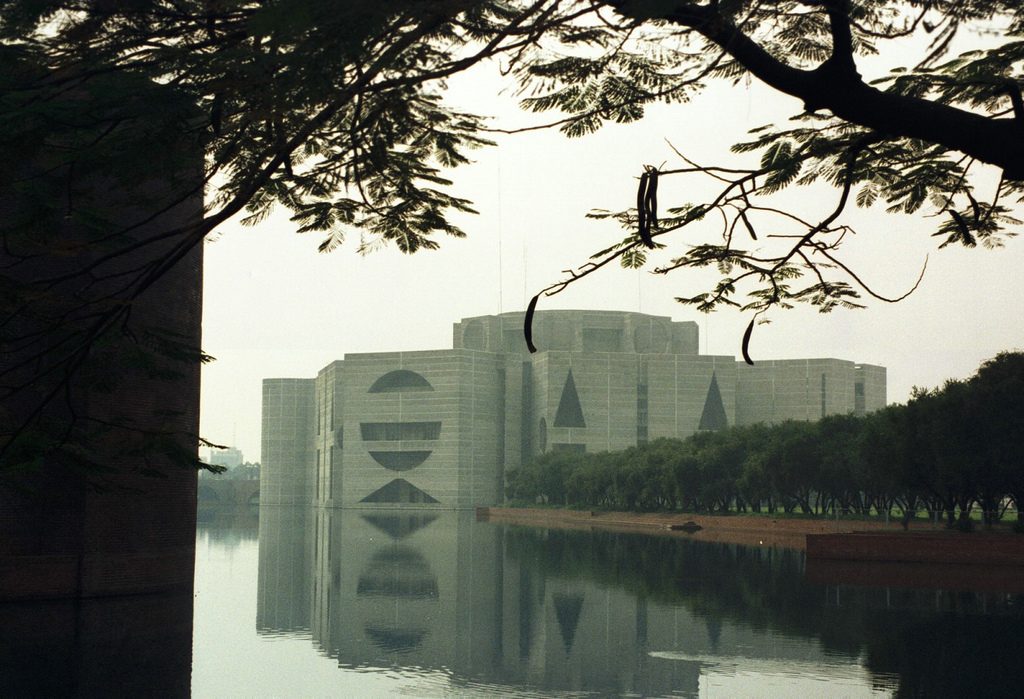 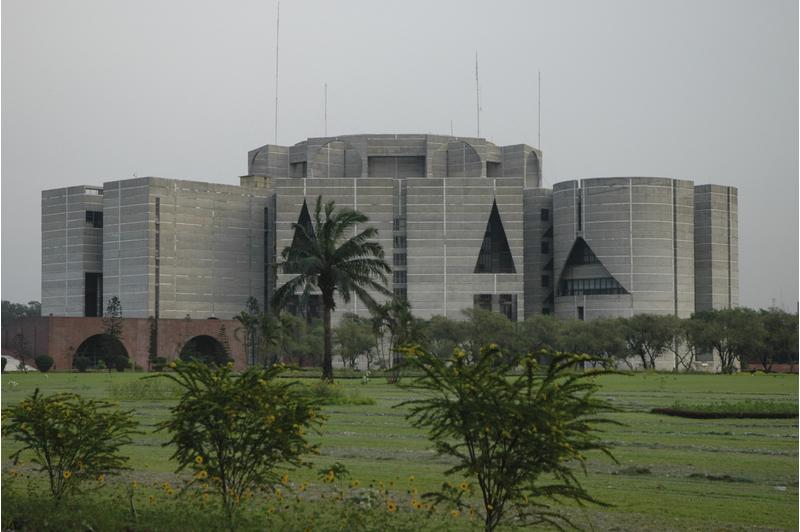 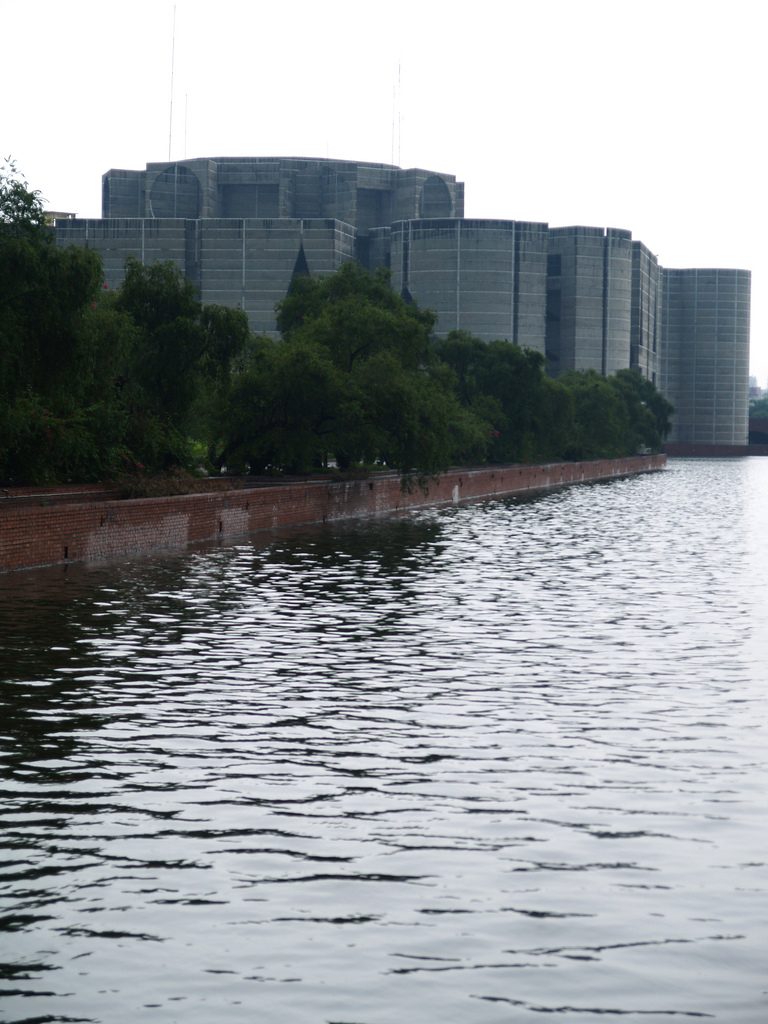 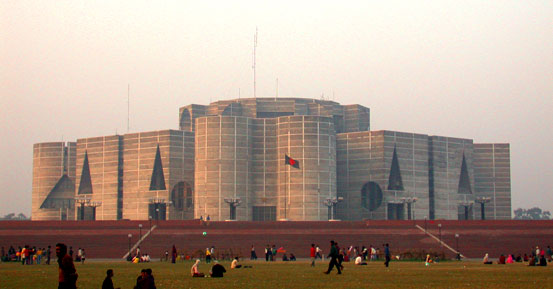 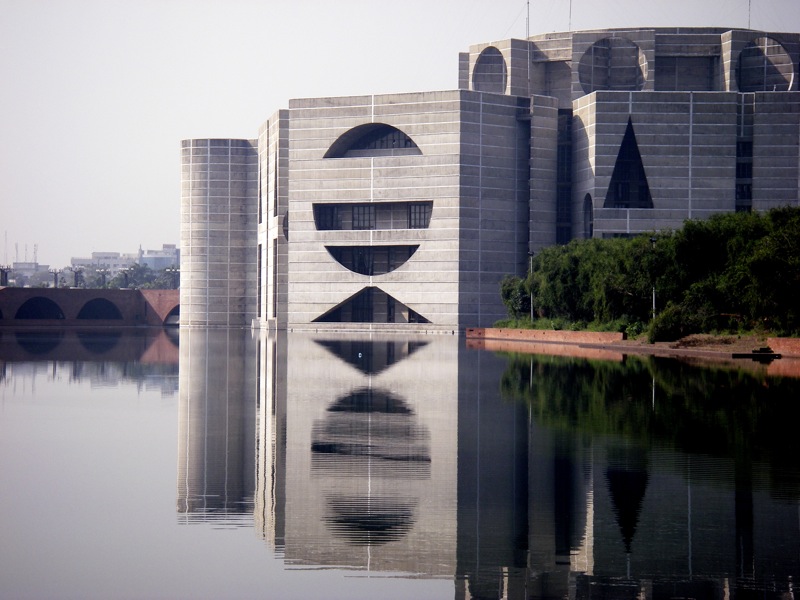 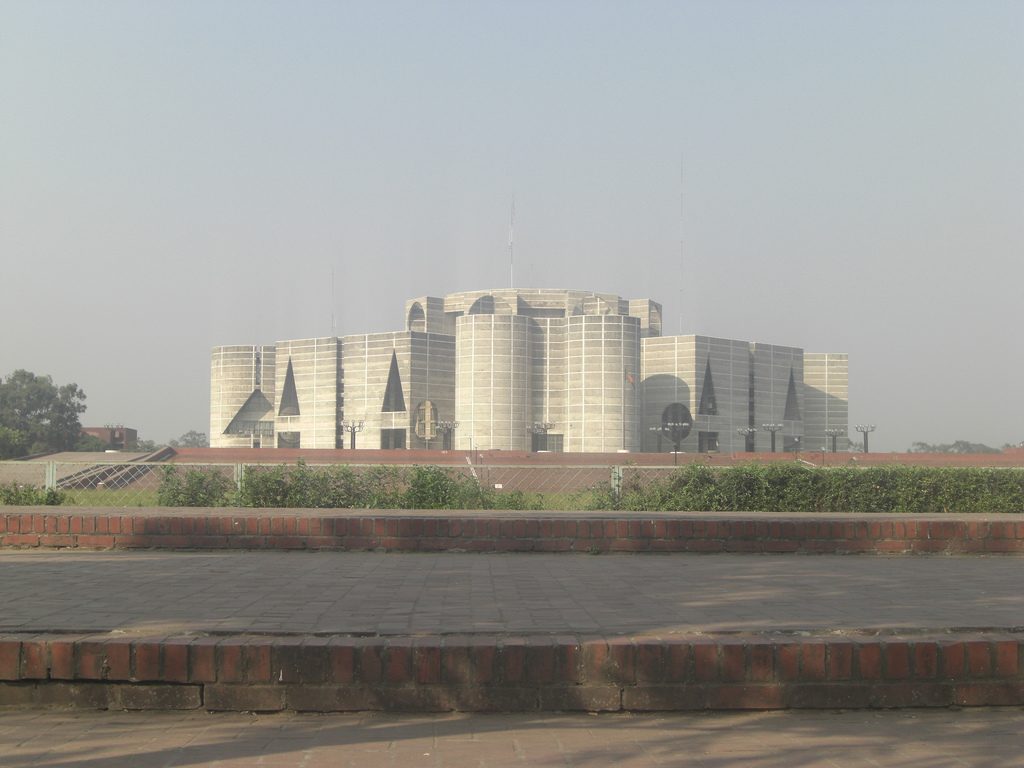 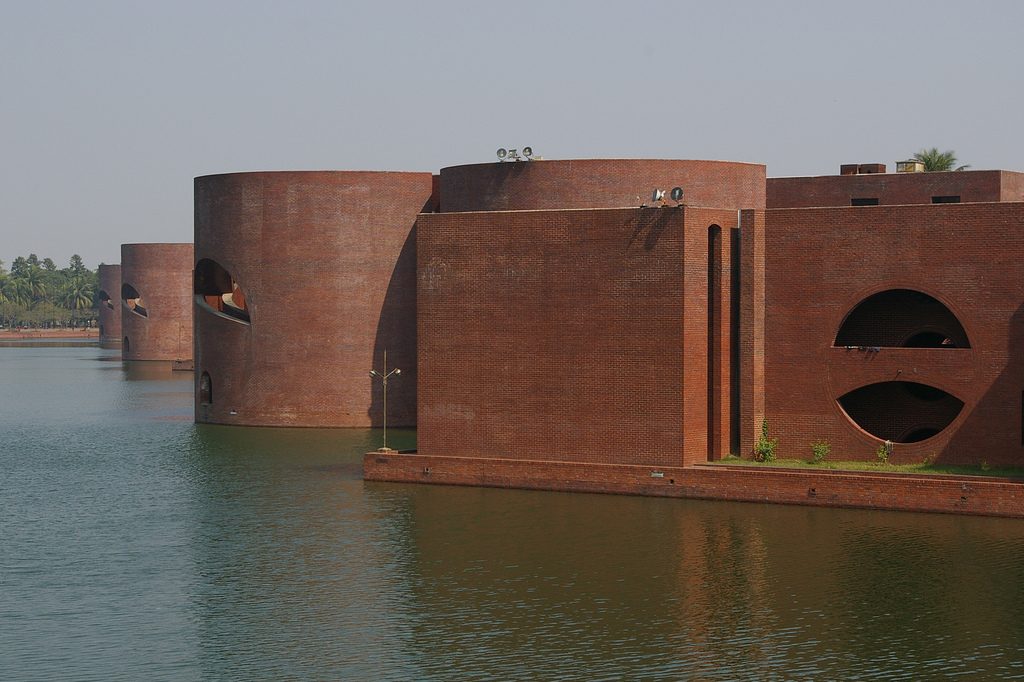 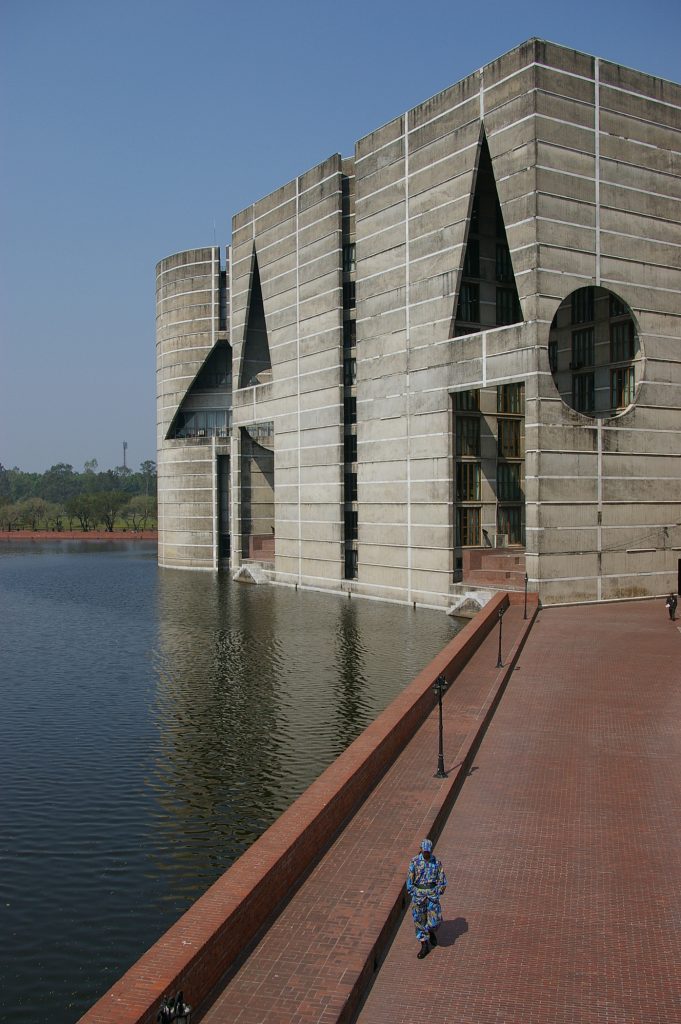 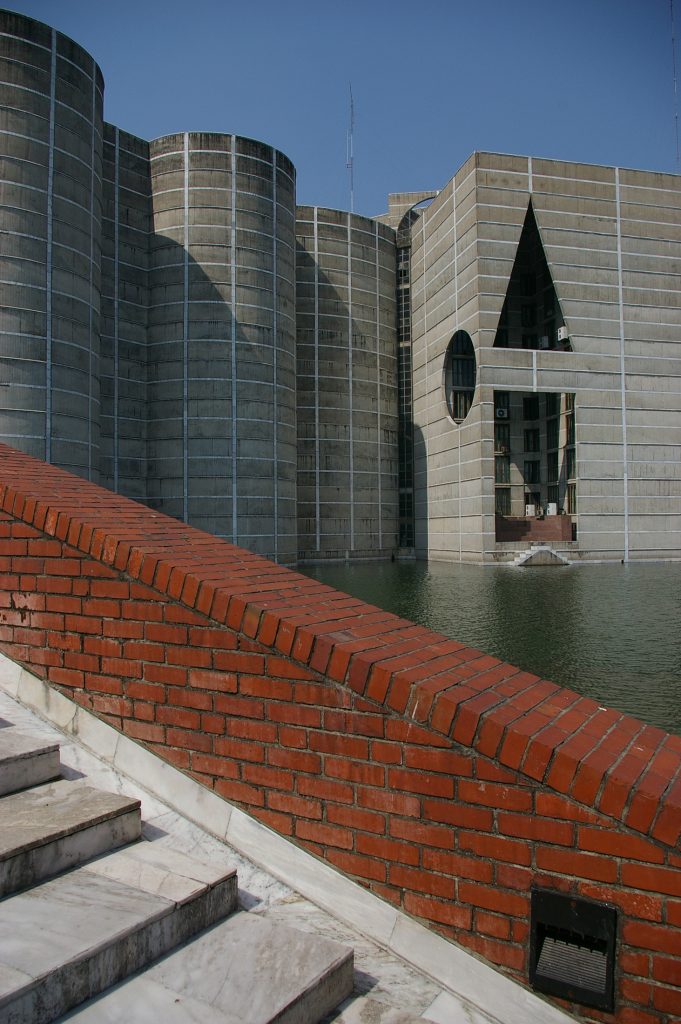 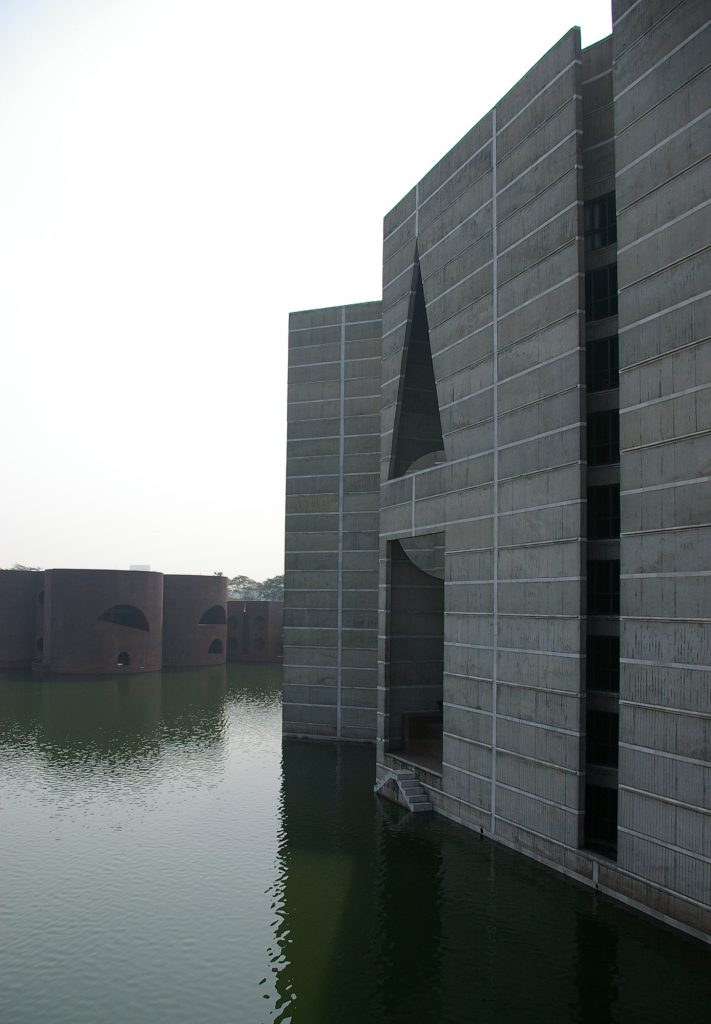 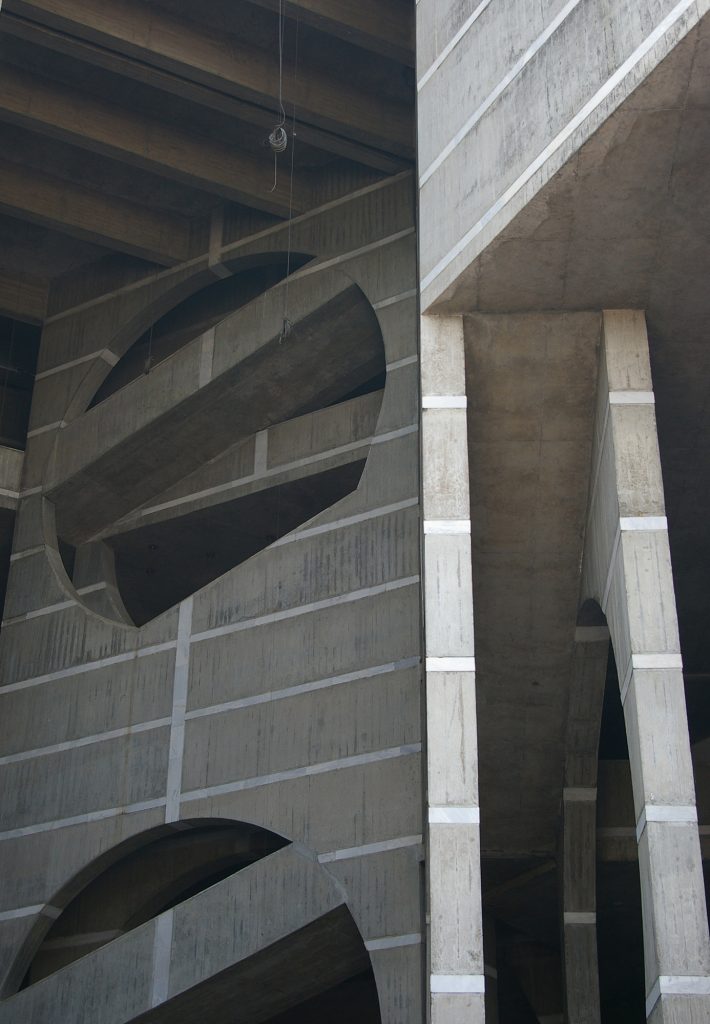 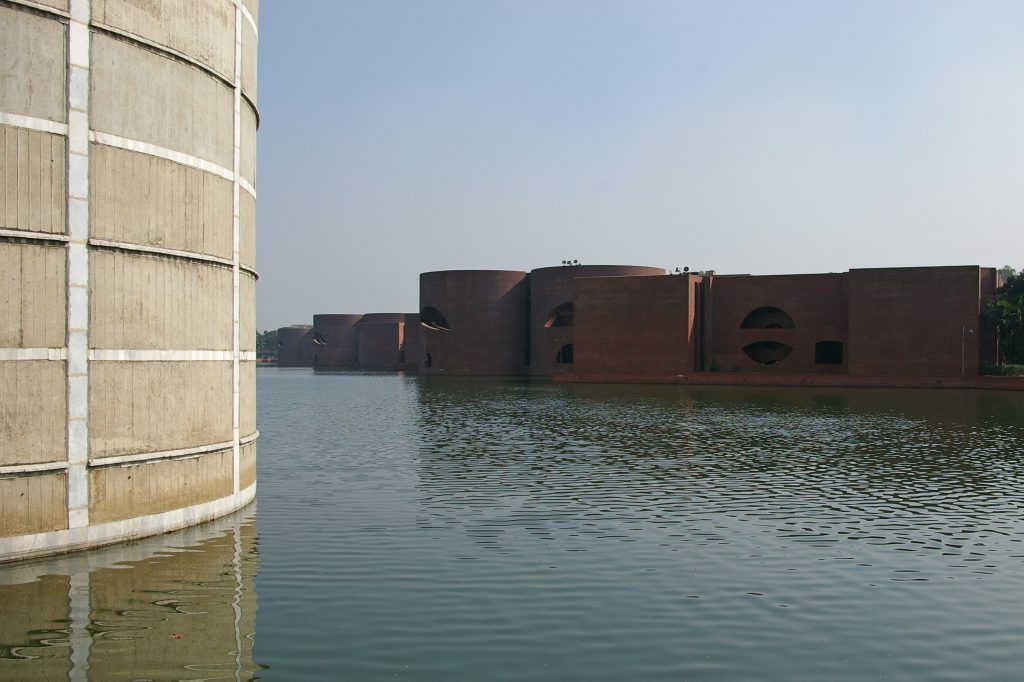 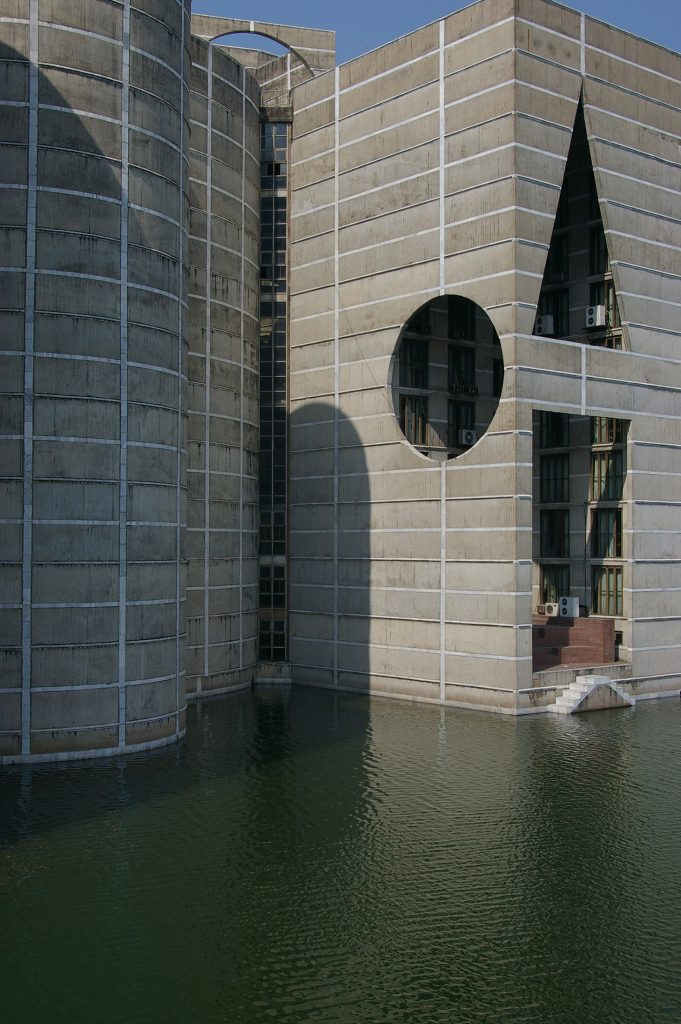 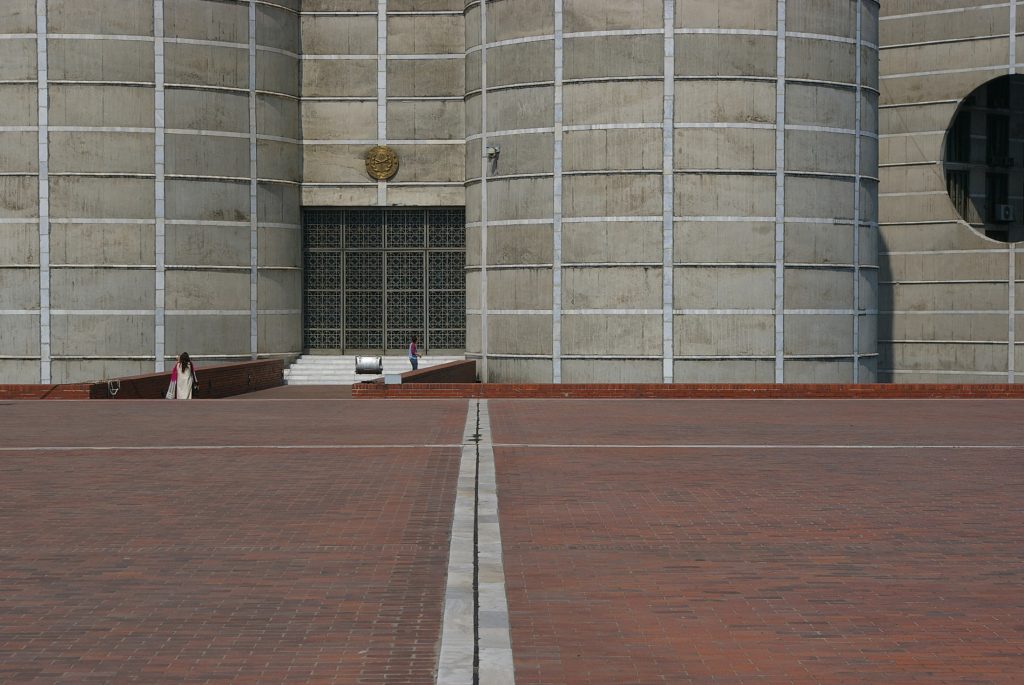 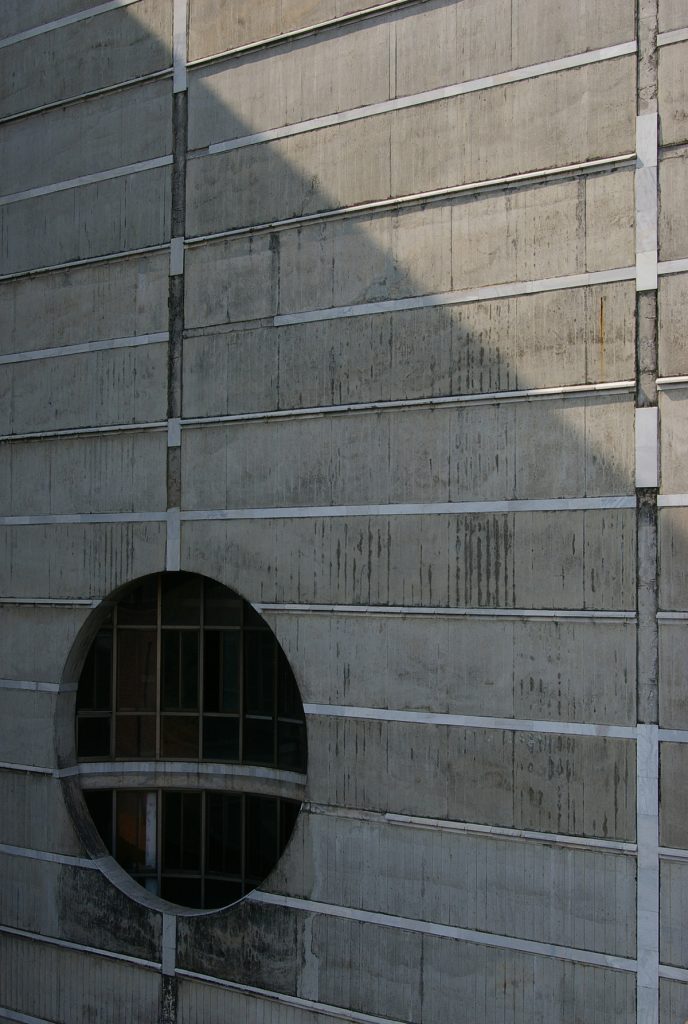 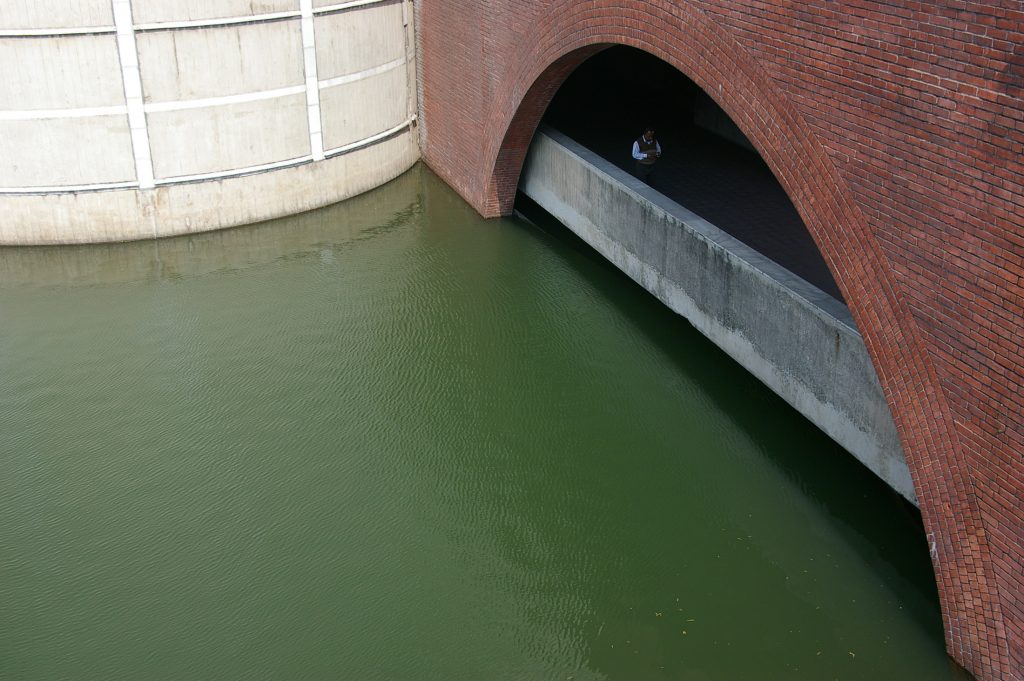 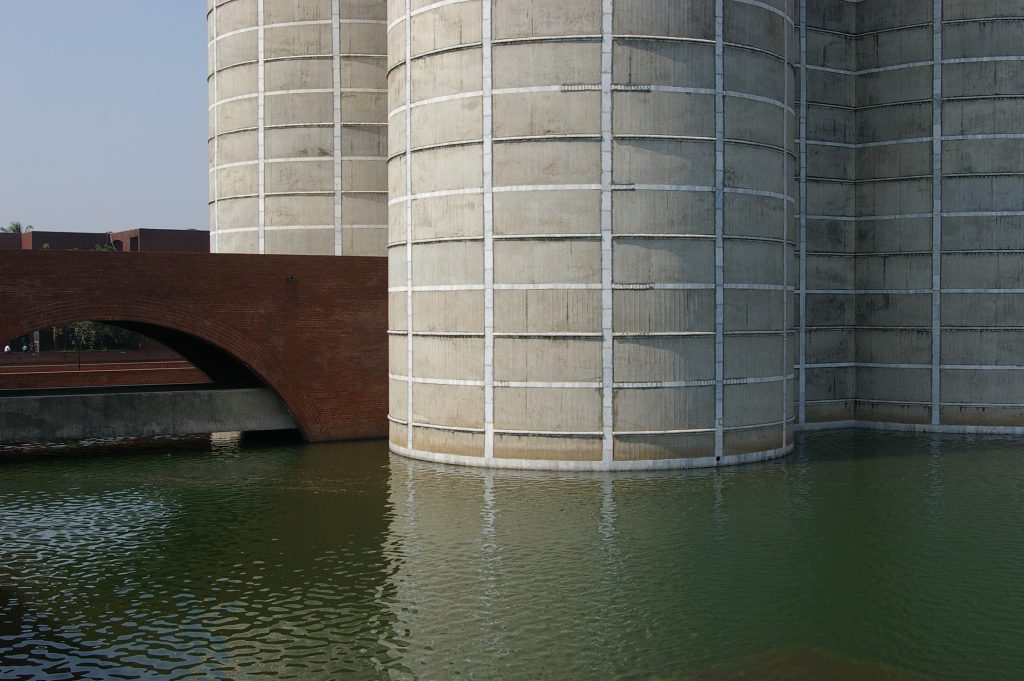 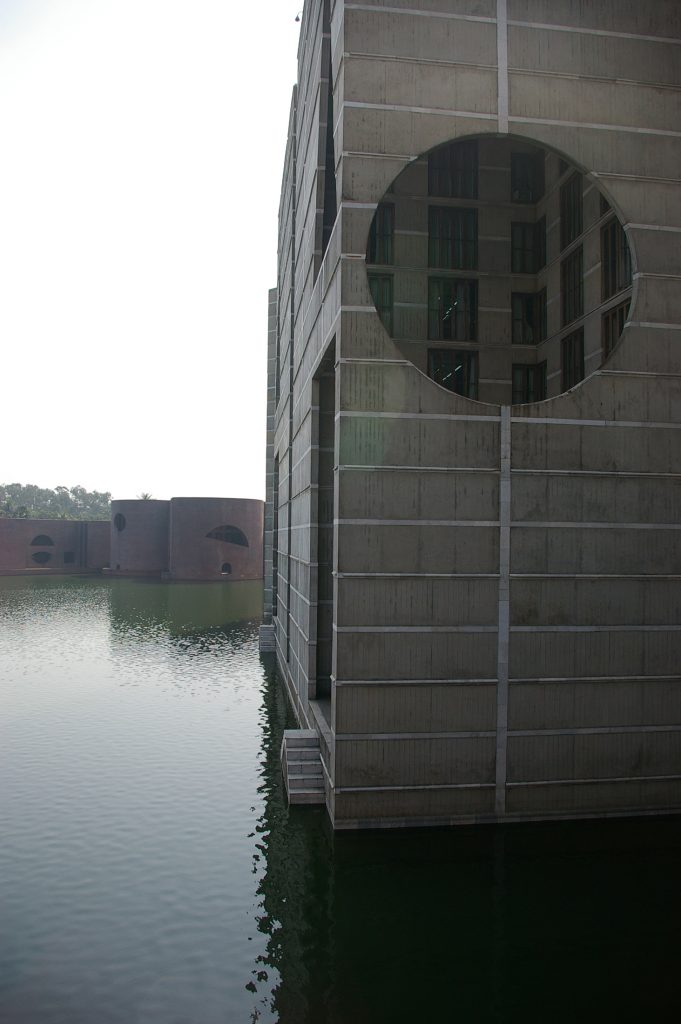 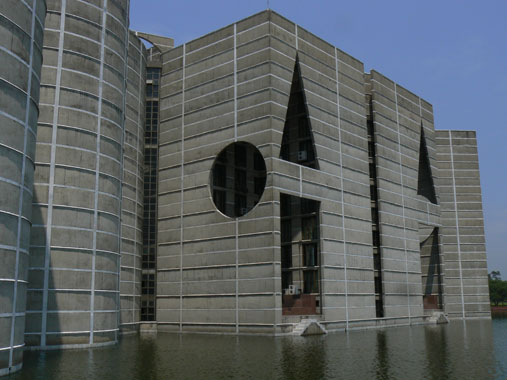 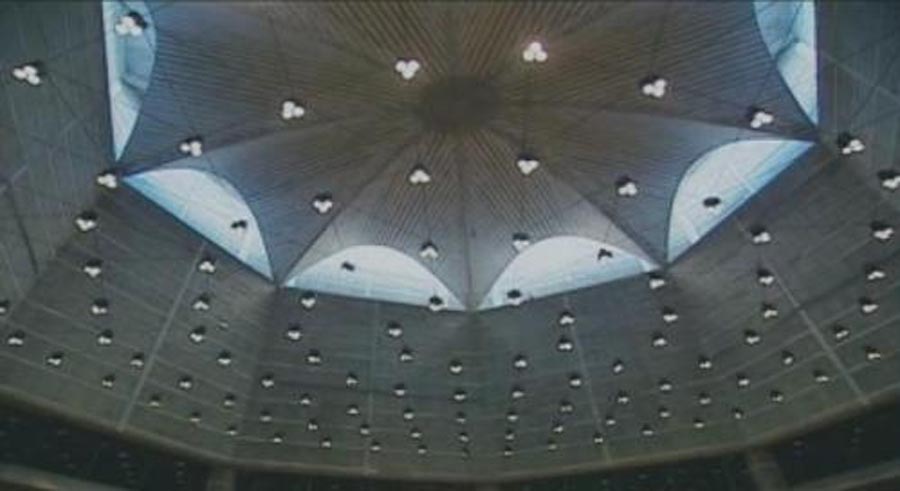 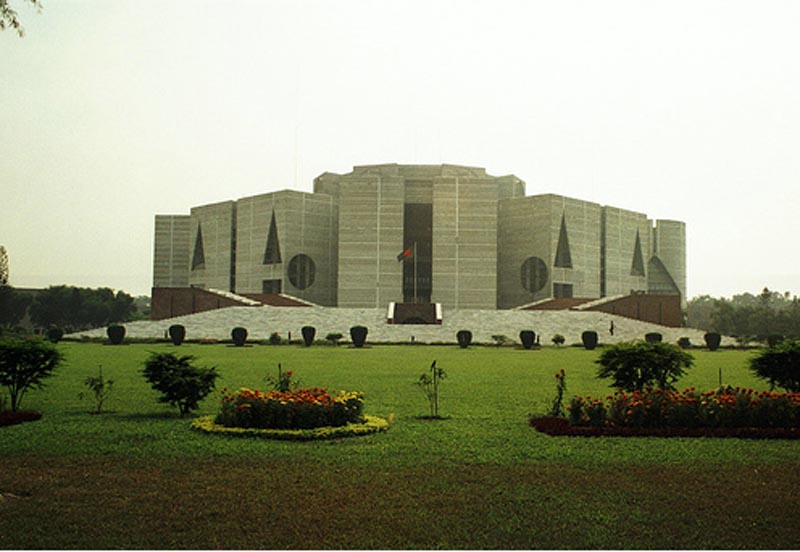 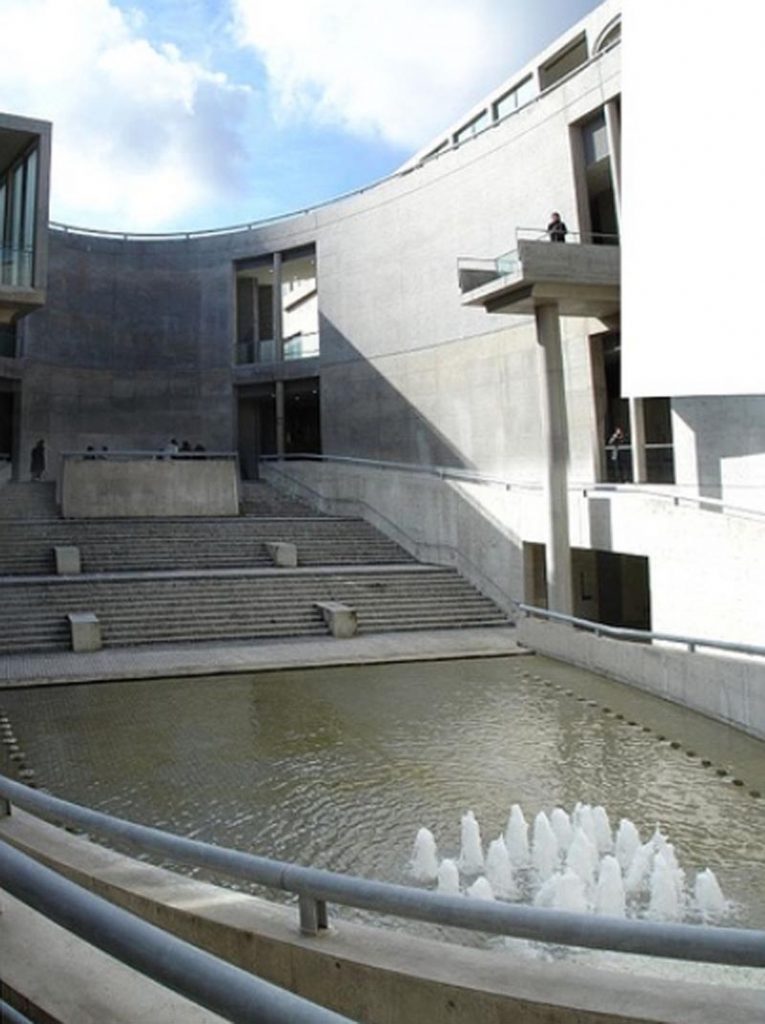