The Millau viaduct spans a chasm 268mts at its deepest part and its construction was scheduled to meet the highest standards of durability and to resist the most seismic and weather conditions, the design of the viaduct takes into account the need for perfect operation for over a century. Constructors Eiffage rose from the same company that built the Eiffel Tower.

The Millau viaduct, the highest in the world, is the latest in the trend of major bridges that has spread internationally. New construction techniques were used, such as the drawing across of the deck, the implementation of which has made history.

The landscape that can be admired when driving on the A75 motorway is undoubtedly one of the most unique that we can find in France. And it is not only by the natural crossing, but from this roadway can be a very special sight. Specifically, 268 meters is what separates the road from the ground at the height of the viaduct.

The layout respects the most important natural sites, landscapes unique in the confluence of the valleys of the Tarn and Dourbie, providing an easy access to the town of Millau.

The construction of the bridge had a total cost of some 394 million euros, with a toll plaza 6 km north of the viaduct costing an additional € 20m. The construction company, Eiffage, financed the construction in exchange for a concession to collect tolls for 75 years until 2080. However, if the concession is very profitable, the French government can assume control of the bridge in 2044. It was inaugurated by President Jacques Chirac on 14 December 2004 and traffic started to cross two days later, on 16 December, after a revised construction schedule. 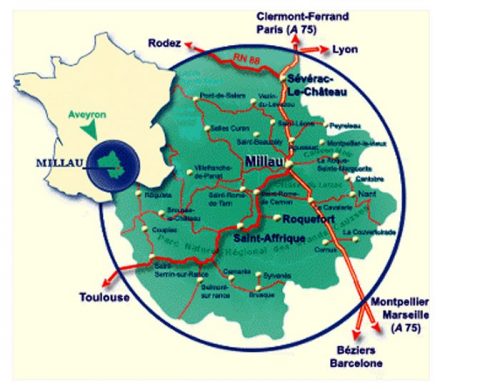 In southeastern France, between the Limestone Plateau and the Red Larzac and crossing over the impressive and overwhelming Tarn River valley, the Millau Viaduct is a spectacular piece of engineering, which is part of the route of the A75 motorway, linking Paris with the city of Béziers, and is part of the axis Paris-Marseille-Barcelona.

The construction of the Millau viaduct began in 2001 with the lifting of the pillars and then the placing the deck which carries the roadway.

Tall is not the same as high. While the Millau Viaduct is the tallest in the world, i.e. has the greatest distance from the base of the pillar to the tip of the suspension tower on the deck, it is not the tallest, the distance from ground level to the top of the piles. This accolade was held by the Royal Gorge Bridge in the Rocky Mountains of Colorado, United States, (291 meter) until 2001, when the Si Du River Bridge was constructed in China at a reported 472 meter.

If the wind strengthens, the bridge resists speeds up to 210 kilometers per hour. To reduce the effect of the wind on vehicles screens are mounted on each side of the deck, slightly curved and with a height of close to three meters.

Atirantado A bridge is one in which the board is suspended from one or more pylons through a thick rope or straps of metal. The difference is that the bridges in the case of the latter board shall be subject in the air for a few vertical cables which, in turn, hung from horizontal ones tend to be between towers over the bridge, while the atirantados hold the board since the very pillars.

To build it was necessary to use techniques never before used in a bridge of this size, no less than 2460 m in length extending to a height of about 150 m.

It is a bridge multiatirantado, with six sections of 342 m in vain to rest on seven pillars, supported at the ends of access in two tranches of 204 m each. If the dimensions and is a unique structure, it is almost more for the fact that this type of technique is generally used in bridges in which only one is used and wasted in this case is eight.

In the case of the Millau viaduct, the board is not only restrained by the atirantado, but it rests on the pillars and their weight is sustained by them in their surrounding area and the shoulder straps on those closest to the center’s success.

The board was designed with the premise that it had to withstand winds of up to 200 km / h. In the case of bridges atirantados, you can choose between two different building models, depending on whether the pillars are flexible or rigid, in this case we used the second option. 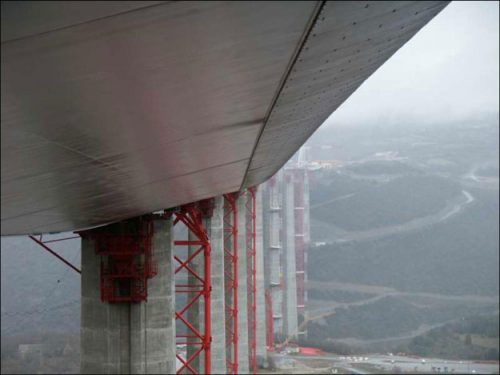 The platform is curved below

It was conceived via a 32 m wide which leaves space for two paths of 11.90 m each, to enable sufficient space for three lanes in each direction. Along with these goes a step protected lanes 2.20 m wide. Between a sense of motion and another was a common margin of 4.5 m wide on the anchor cables atirantado.

The platform was designed with a curved form below. In fact two straight sections that are joined to a backbone (a ortoedro), thus establishing a trapeze.

The 2.4 km long viaduct was not built in a straight line but a curve with a radius of about 20 km imagination, performed with a drop of just over 3% from start to finish.

The pillars of the viaduct have different heights that can be saved from the abyss on the terrain that stretches. The two highest of 245 and 223 meters, 19 meters taller than the Eiffel Tower, were constructed from the longest so far in the world.

These columns are not only unique for its size but also its shape. It was not designed in a way unconventional.

The upper 90 m of each are divided into two separate parts. The reason for this lies in the model bridge used with rigid pillars, and the origin of thermal expansion experienced by the board. As the pylons that stretch straps are embedded in the pillars, the expansion of the board are given directly to them (with a displacement of up to 40 cm). The solution leverages the encastración of the pylons and at the same time, make the columns a little less rigid.

Construction of the pillars 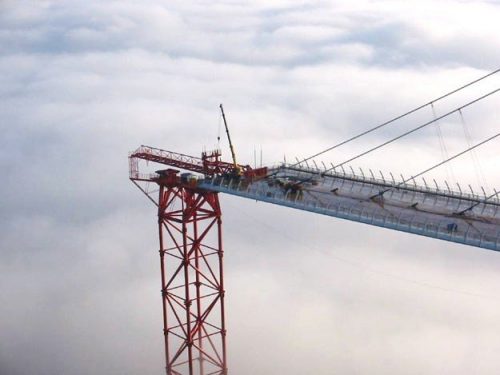 For the construction of the pillars used a technique known as shuttering autodeslizante or climbing. Is to use a platform that, by hydraulic jacks, is raising support for the reinforced concrete and hardened. In other words, the column stands on itself as it is built. The positioning of each of these structures was further checks with the help of GPS altimetrical, which led to an accuracy of 5 mm.

Each pilot in turn is composed of 16 sections, each of which weighs 2230 tons. These sections were assembled at the place of work, from pieces of 17 meters long, 4 meters wide and weighing 60 tonnes were produced in Lauterbourg and Fos-Sur-Mer by the construction company Eiffage.

Among the concrete pillars were set up other temporary support (tools) in order to facilitate the placement of the columns on the board. These were steel telescoping rebels and helped move the board on these pillars.

Everything is in Millau size XXL. For example, the expansion joints on the board measuring 1.20 meters on the south side and meters on the north side. This difference is because the bridge has a slight inclination to slash 3%. The enormous importance of these meetings is related to the temperatures at which they will be subjected the whole spectrum that ranges between 45 and 35 degrees below zero.

Beyond the desire for a perfect integration into the landscape, the technical solutions chosen, board piles of concrete and metal, have several advantages, such as the fineness of the board that lightens the load structures, while during construction, reducing of works on site, factory prefabrication of elements of the board, and a decrease in volumes of materials to be used on the site, about an all-concrete reduced the inconvenience to nearby towns to work.

The steel board is made up 36,000 tons of metal frame, 7 times the Eiffel Tower. 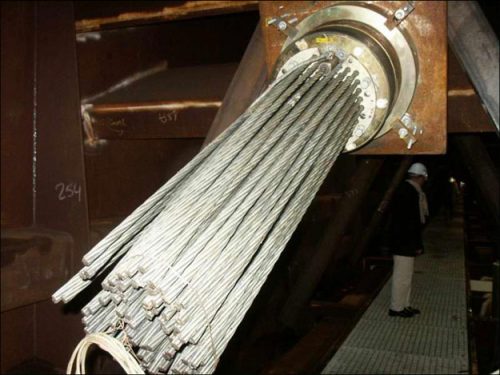 The role of the steel cables is to transmit the weight of the suspended leg pillar, so that the greatest effort, which is what is supported midway between a pillar and another is handled by them.

While normally this technique has been used historically for a bridge or two openings, it has also begun to use for those with a greater number of installments, as is precisely the case of the viaduct of Millau.

The viaduct is equipped with safety barriers resistant to shocks for trucks, the transparent wind screens cutting height of 3 m, routes to the emergency lighting ensures a great comfort and safety of movement for users. In case of breakdown or accident, points of emergency telephones are installed every 400 m.

Unless a serious accident or exceptional wind speed, the viaduct is open 24 hours a day. Furthermore, access to information from national weather, the information center has its own weather forecast.