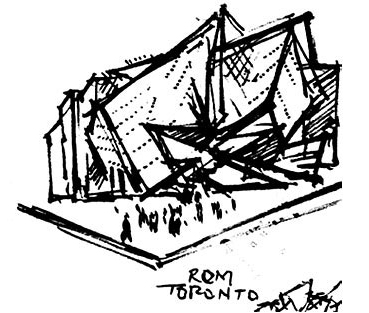 On June 12, 2007, the Royal Ontario Museum opened the new extension designed by Daniel Libeskind in collaboration with Bregman + Hamann.
The project is called Michael Lee-Chin Crystal, in honor of the Canadian billionaire Michael Lee-Chin banker who contributed $ 30 million to immortalize his name as a patron of art.

The building was designed by famous architect Daniel Libeskind, who won in February 2002 the competition for the third extension of the museum. He is also the creator of the winning project to rebuild the World Trade Center and the Convention Center “Maurice Wohl” the Museum of the City of Osnabrück and Imperial War Museum among others. The new extension provides a dynamic architecture that create a large number of people and 9,200 square meters of exhibition space. The new ROM combines perfectly Libeskind structure with classical and ancient original building. The ROM is dedicated to the cultures and natural history. It is the fifth largest museum in North America and the largest of Canada, with a collection of over six million pieces spread over 40 galleries. His collection includes dinosaurs, native art from Africa, Asia, America and Western historical objects.

Annex designed by Libeskind embraces the historic building of brick and carved stone that has hosted the ROM since 1912 and has expanded at different times: a stately building in neo-Romanesque style, designed by Frank Darling and John A. Pearson, later extended by Alfred H. Chapman and James Oxley. Also achieves an intensive dialogue with the streets surrounding rising 37 meters above the ground, flying over one of the neighboring streets.
With its new look, the Royal Ontario Museum tries to peel off the label of “strength” or “castle” with which it was often identified, becoming a focal point of contemporary urban life in Toronto.

Located north of Queen’s Park in one of the most important intersections in the city of Toronto, Canada, the museum becomes a dynamic center for the city.

Located at 100 Queen’s Park and Bloor Street West, its main entrance is located on Bloor Street.

People danced at a wedding and provided for the health of the newlyweds when Daniel Libeskind scribbled on a napkin his idea for his new assignment: an expansion to the Royal Ontario Museum, the largest in Canada.

Daniel Libeskind, was inspired by the crystalline forms of the Department of Mineralogy of the Royal Ontario Museum to shape your project posed a structure of prismatic shapes, organically linked, giving priority to public space and transforming the museum into a luminous center.

Inaugurated in June 2007, the extension provides 9.200m2 of a new exhibition space, a new entrance lobby, a shop selling retail to street level, a cafe and three new restaurants. Also as part of the project, have Renovated about ten galleries in the historic existing building.

Visitors to the museum, go directly into a spacious atrium triple height, Event Hall, where you will find the two representative subjects Museum, Natural History and Cultural Heritage. These issues become more evident when climbing stairs leading intertwined exhibitions. The entire first floor is unified in an open space that allow drivers with fluency, ease and comfort. Up on the roof, the restaurant is situated with spectacular views over the city and the nearby nature park.

The new harbor facilities ROM six new galleries specializing in dinosaurs and mammals, native art from Africa, the Americas and Asia-Pacific, Middle East and Textiles, besides Crystal Five gourmet restaurant and a shop. Dynamic angular shapes create a bright, modern exhibition space, not only for galleries, but also for a new entrance lobby with a special access for groups. 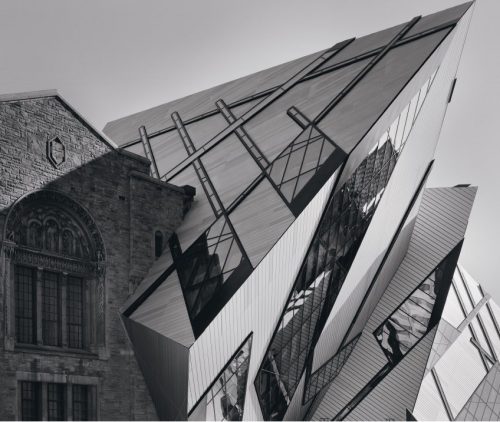 The intersection of the five volumes of the building are reminiscent of the quartz crystals in nature.

The intersection of two crystals, both dedicated to new galleries, creates a vacuum, known as the Spirit House (Spirit House). A large atrium that rises from below the ground level to the fourth floor, crossed by bridges at various levels, the Spirit House aims to be a place of reflection for visitors.

A glass room, known as the Ladder Wonderland (Stair of Wonders), is intended to vertical movement, but also has display cases at the landings.

A fifth glass houses a restaurant. The spaces of intersection of the Michael Lee-Chin Crystal create variety of courts at different levels, with a view to galleries and other spaces within the Museum. A large atrium, known as Hyacinth Gloria Chen Court (Hyacinth Gloria Chen Court), separates the new construction of the existing building, ROM, and provides an almost complete view of the restored historic facades.

Is considered one of the most complex and innovative construction projects in North America for its sophisticated structure. The building consists of five prismatic structures interconnected steel beams autosoportadas coexist, but not structurally attached to the original building ROM rather than bridges that unite them. 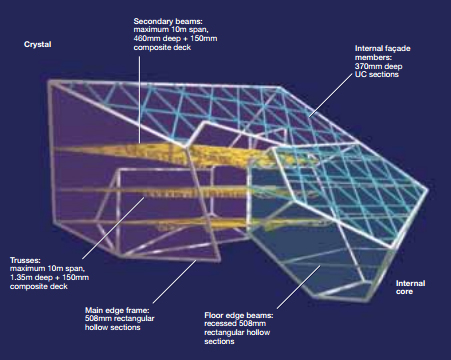 Libeskind’s buildings are well known for their unusual shapes, and challenge the team started at the same time the contest. A special structure intended, since the challenge was increased by the desire to insert the new shape with the original building and take advantage of their existing plants. In previous projects with Libeskind, as the Imperial War Museum North in Manchester, England, the structural engineer Arup used a methodology based on 3-D programs like Rhino or GSA. For the competition of ROM, this methodology allowed to create the basis of structural concept.

For the development of the new building concrete building Queen Elizabeth II Terrace, useless and for use by the museum was demolished, allowing recover public view some of the old facades. Its demolition gave way to reinforce concrete basements, avoiding changes to the original foundations and underpinning their bases. New pillars were placed in the foundations and structure was designed with air intake and extraction trenches, to adapt the space to the placement of the main technical services of the museum.

The space of the basement was intended to “exhibitions guest” with a new entrance. Thus one as free as possible column is created, although support structural higher mega-structure, which passes through the place, aligned and angled with glass walls above, by connecting the ground architecture with the surface. 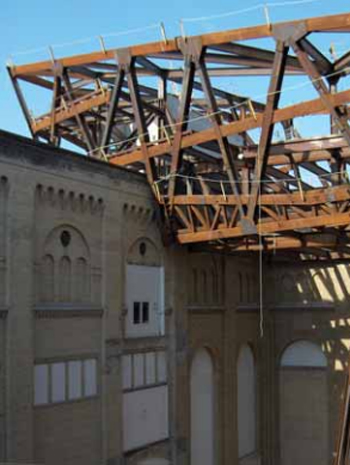 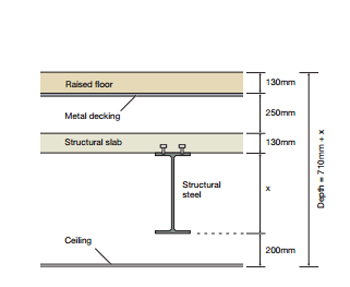 The shape and construction complexity led to the decision to use steel structures. The frames were adapted to the shape of the building and architecturally best way to harmonize with the coating glass top.

Composite steel and concrete floors complement the main structure and act as horizontal membranes that help stabilize and maintain the structural form. In this superstructure is a single vertical wall, the other generate lateral forces acting together in complex ways with the floors.
Distribution systems of the building services were incorporated into high structural floor to allow flexibility of use in exhibition spaces. The socket exposure rises from the ground allows exposure of dinosaur skeletons, reaching the same level as visitors

Relationship with the above structure

The relationship of the new structure to the existing building was crucial, especially with respect to seismic design. No lateral load should be transmitted to the sensitive original structure of masonry, which would have required a total and expensive upgrade, consequently much care was taken in the placement of the mounting position and bearings when they were inevitable. The unusual shape of the building required wind tunnel tests to accurately determine the effects of the applied force thereof, including dragging, as well as any unforeseen changes that could affect the old building.

These tests were also used to assess the conservation status of the different departments of the original museum or capacity ceilings in removing snow or icing, which were poor, necessitating the construction of a new drainage.

The skin of this Annex is made ​​of glass 25% of its surface and a unique aluminum sheets burnished only manufactured in Germany (in the same factory with working Gehry for the creation of its world famous titanium sheets). The complex shape of the crystals had to develop new construction techniques and train staff work for proper placement.
The steel beams that form the skeleton of more than 3,500 tons each have different degrees and angle positioning.
For construction were also necessary concrete 9,000m3.

The heating and cooling requirements were based on local external data, corresponding to a 99% statistical reports: -17.8º winter, summer 32º-24º.

The team developed the criteria for interior design and location of the galleries so that they could optimize their performance, both in relation to the facades as exposures that might contain. All galleries are introduced into a series of spaces which act as buffers to control the influence of external temperature. The doors of the main entrance and atrium were carefully equipped with air-proof locks.
The international gallery for exhibitions, located in the “blockbuster” meets international standards of conservation of temperature, moisture, and light. Its position in the basement of the new building allows these factors are closely monitored.

Maintaining energy efficiency within a curatorial environment is difficult, but with a careful selection of systems, components and controls link the different spaces are able to recover and minimize energy waste, including systems using active technologies and passive.

The whole building is protected by sprinklers, and new galleries have a smoke control system for areas incorporated into the walls of thick glass to remove the smoke on the basis of a signal fire fans. 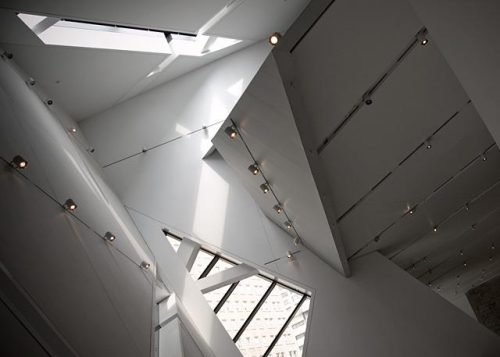 The exhibition spaces with natural light are resurfacing, leaving behind only the illuminated spots or other light system. Daylight provides a natural and changing dynamics and a better appreciation of colors that artificial light, in addition to supporting the environment. Despite technological advances, the human eye will always be able to perceive the subtle qualities of a light source and the light of day is impossible to imitate convincingly. Generally it is necessary to study and establish where sunlight throughout the day and throughout the year is. In this case, the special geometry by the architect and the settings used for the fenestrations, define both the crystalline geometry of the building as how the natural light coming through the walls.

The approach to all galleries was to provide a strong architectural graphic stripes canvas on which some lights mounted on rails could be added, adapting to the configurations of exposures.

The area of ​​the house of the Spirit, space for contemplation, discreet lighting required, therefore only the bridge deck display that crosses this space is illuminated to allow circulation. This illumination is achieved with continuous strips of fluorescent fixtures, low hidden on the inner side of each rail.

The rest of the space, ie, all sloping walls, are strategically lit only if some artwork occupies them. At the bottom of the bridge are placed two tennis circuit to facilitate any necessary settings possible exposures visual effect.

In the bar and restaurant area, similar to the strips of windows architectural lines are molded into the roof area. Dual color fluorescent lamps (3000K / 5600K), are hidden along these lines providing ambient lighting. Separately adjustable circuits control the different colors of the lamps allowing a light color and intensity thereof.