The house that architect Mies van der Rohe designed in 1952 for the member of one of the most prominent families in Chicago, Robert Hall McCormick III and his wife, the poet Isabella Gardner, is one of the three single-family houses designed by the architect in the United States. It is one of Mies’ less known works and in it the architect incorporates elements of his famous designs for the Farnsworth House and for the 860-880 Lake Shore Drive Apartments, both in 1951.

In 1994, the house moved from its original location to its current location next to the Elmhurst Museum of Art at 150 Cottage Hill Avenue. In 1997 a closed corridor was added between the structures, hiding the original entrance of the McCormick House.

Today, the McCormick House is the cornerstone of the Elmhurst Museum of Art collection. The museum has initiated a multi-phase restoration plan to return the house many of its original features. After two years of research funded by the Institute of Museum and Library Services and in conjunction with Elmhurst Heritage Architecture Studio, the first and second phase of the renovation was completed, using a coating to preserve the steel structure and repainting the original exterior , separating the corridor that hid its facade for 20 years and restoring the garage and the iconic entrance. Phases 3 and 4 will repair some of the original architectural elements of the interior.

Originally located at 299 Prospect Avenue, in the suburb of Elmhurst in Chicago, United States, it changed its location when it was sold, in 1991, by its last occupants Ray and Mary Ann Fick to the Elmhurst Fine Arts and Civic Center Foundation that moved the structure to the new campus of the Elmhurst Museum of Art, in Wilder Park and to its current location, 150 Cottage Hill Avenue, next to the museum.

Its construction originally served two purposes: it was a house for the McCormick family and a prototype for a group of smaller and more affordable, mass-produced modular homes in the western suburbs of Chicago that McCormick and co-developer Herbert S. Greenwald had hoped for build. The project that raised its budget due to the increase in the price of steel did not have enough stakeholders and was not built.

Although this project never took off, the modular house is an early example of mass residential production, a method that was later known as prefabricated.

The McCormick House, a proposed prefabricated housing prototype for the western Chicago area, is composed of two displaced and terraced bodies that serve the purpose of creating separate wings, one for parents and one for children.

The one-storey house has a 3-bedroom children’s wing, one of them for the maid, a games room, a full bathroom, a room for heating machinery and the kitchen through which you can access to the parents wing.

The parents’ area has a bedroom with dressing room, a full washbasin, a study and a living room. Making an angle between the two bodies is a large eave that serves as an open garage and where the entrance to the house is opened.

The structure of the McCormick House, of a single plant composed of glass and steel, sits on a concrete slab. In the side walls and in which the entrance is located bricks have been used. 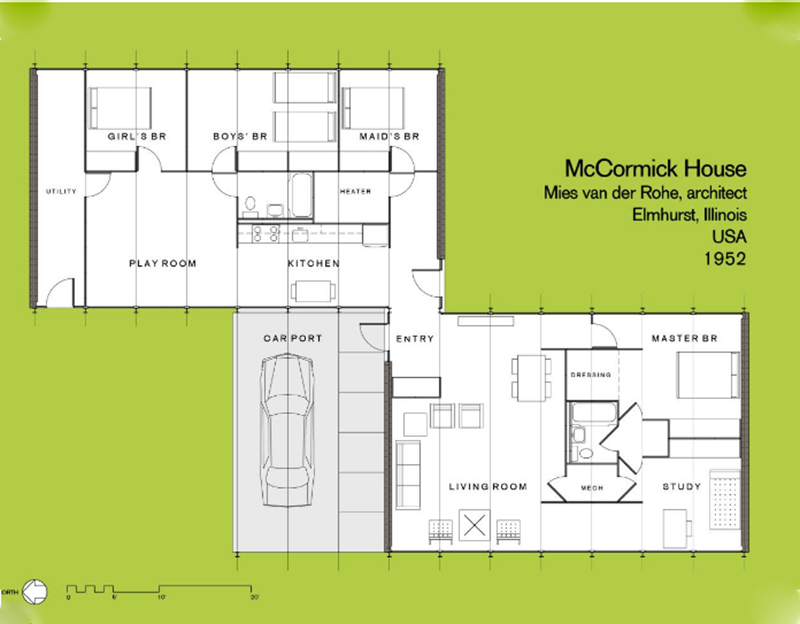 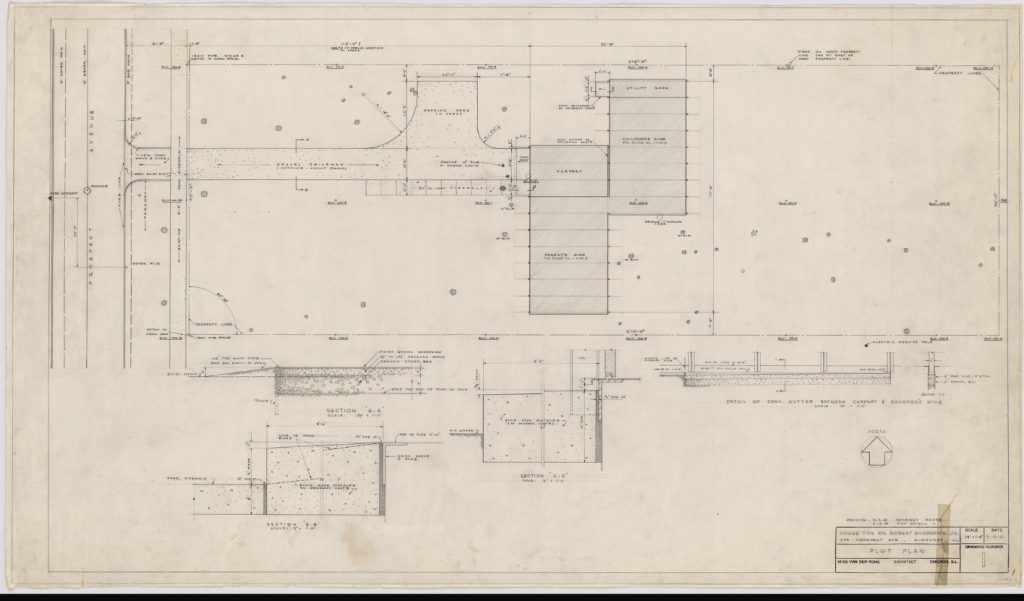 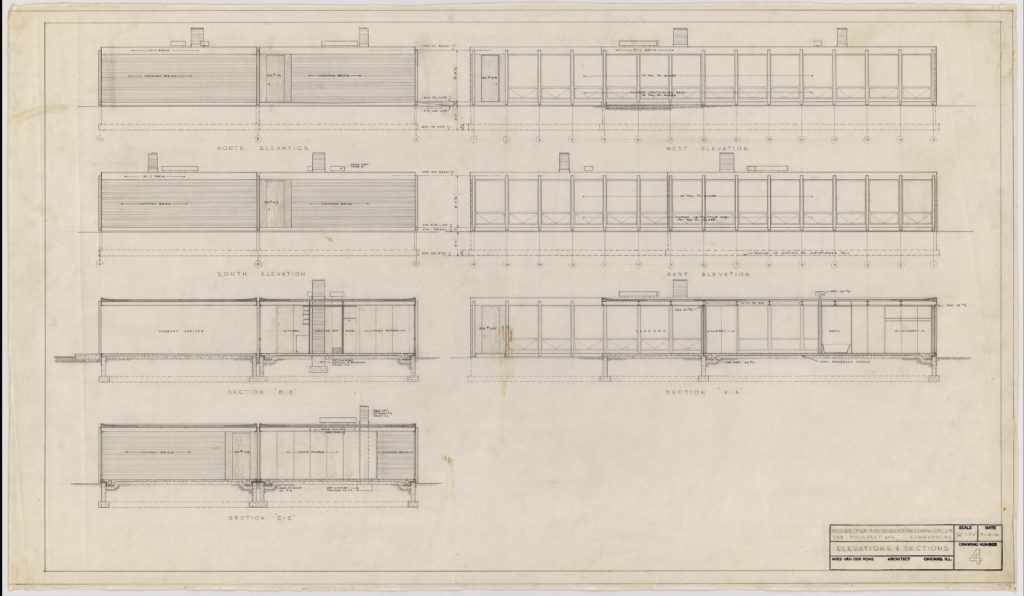 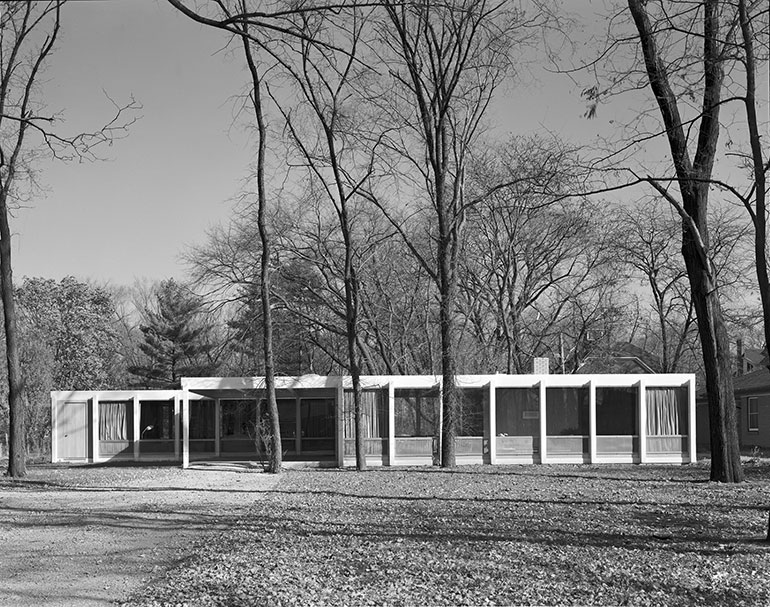 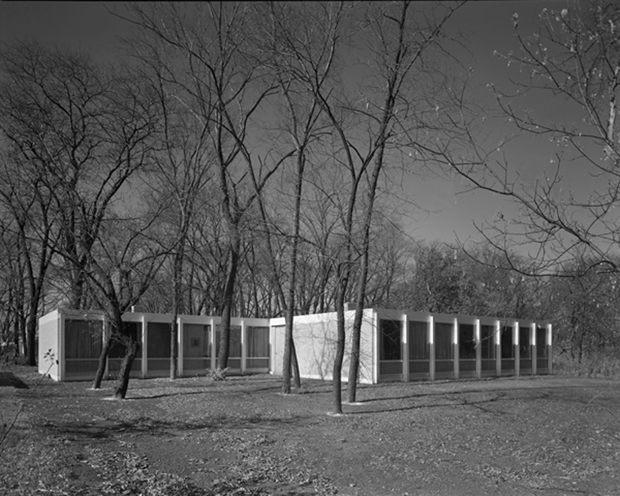 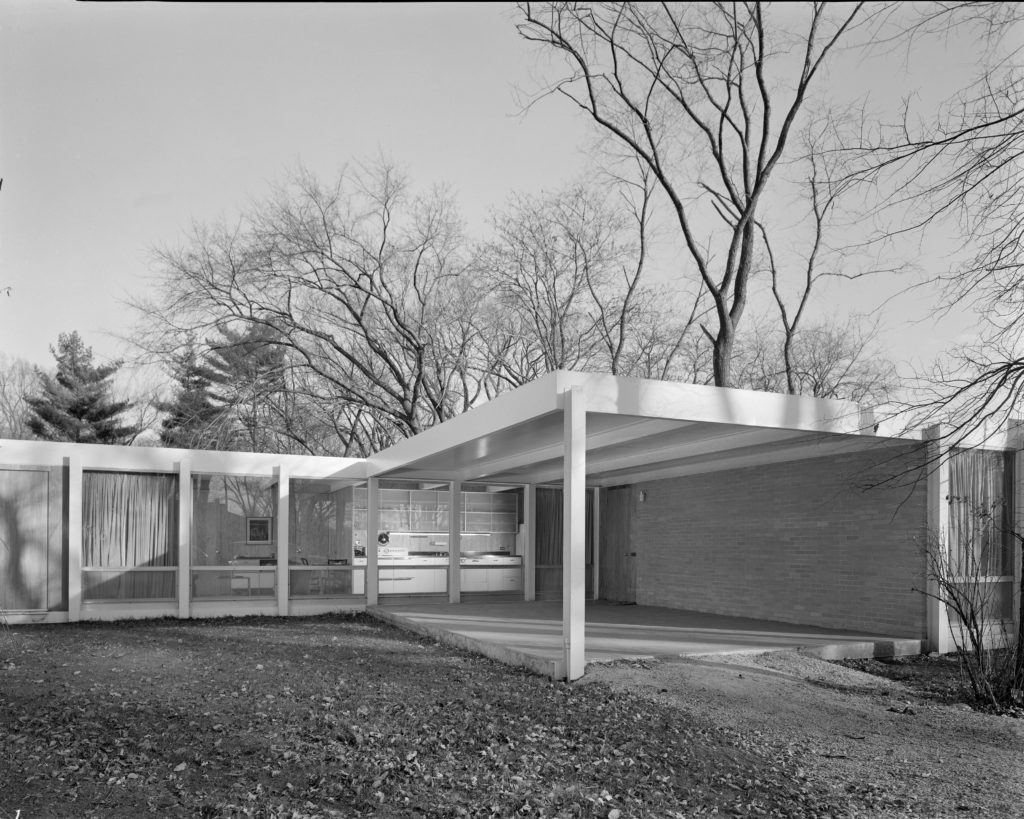 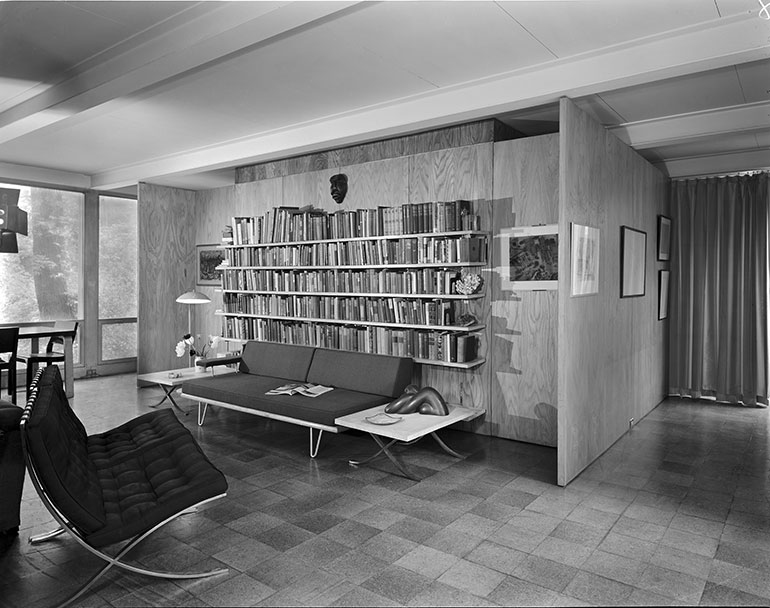 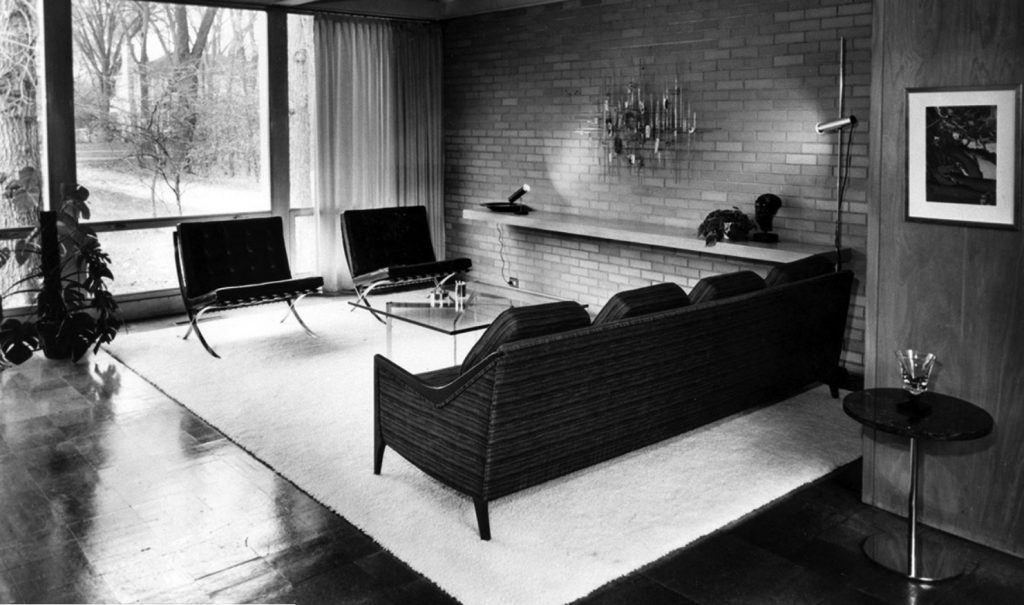 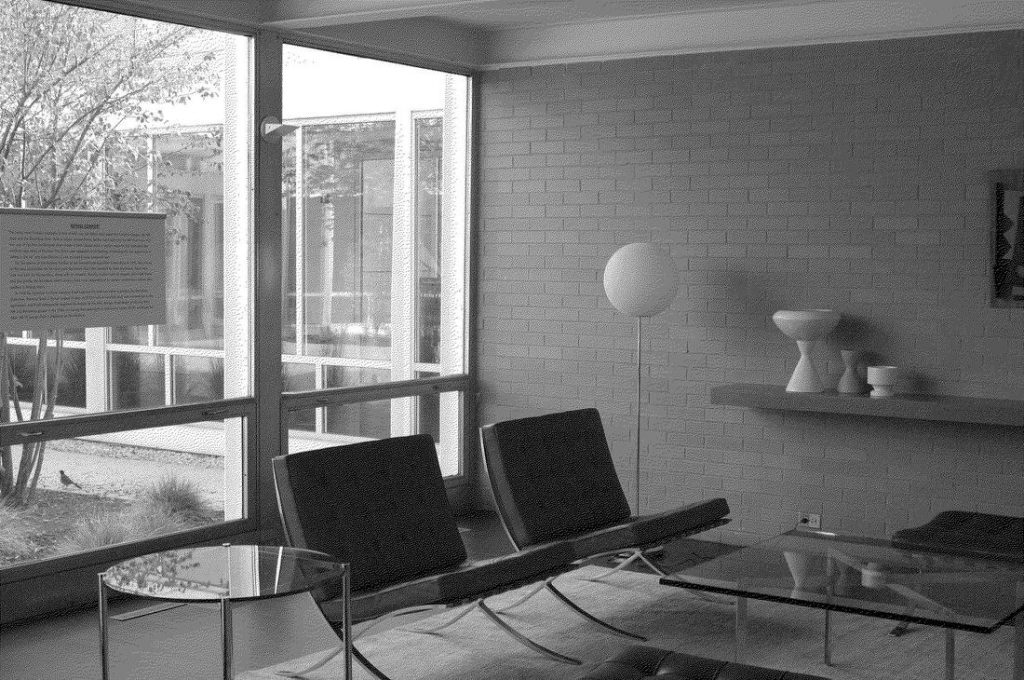 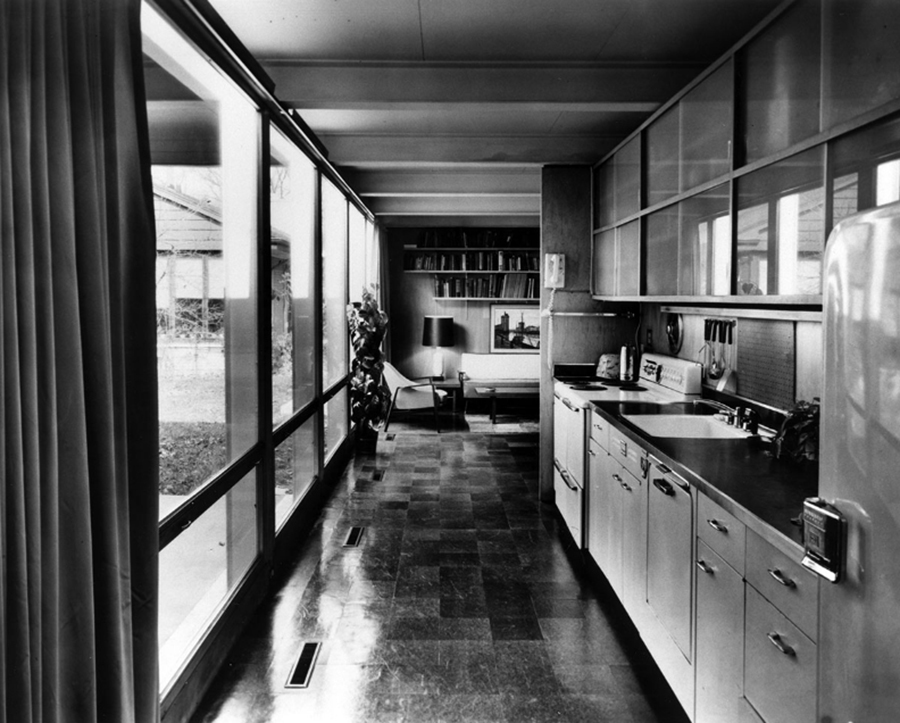 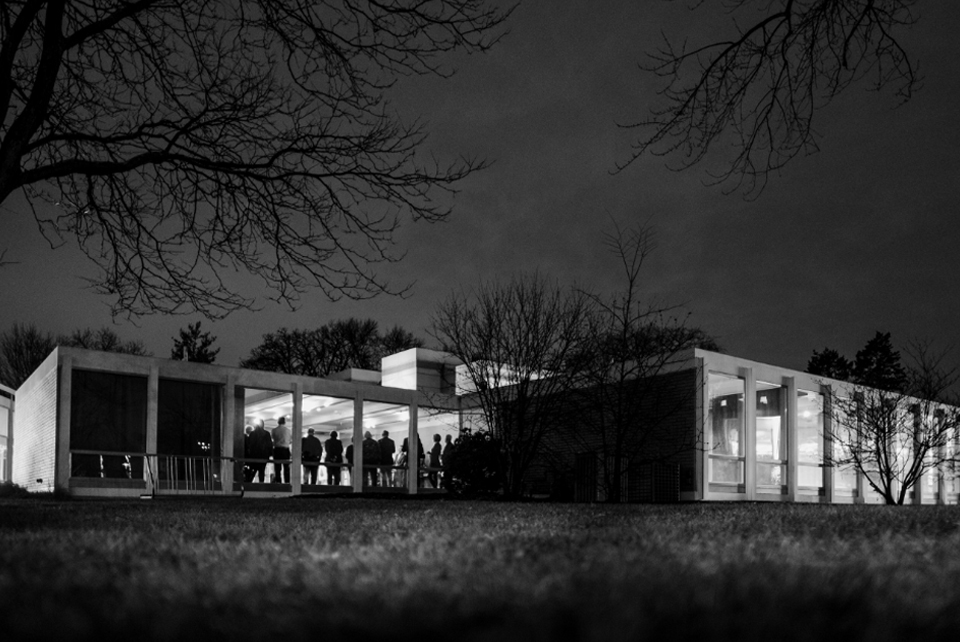