Citrohan home is, within three basic prototypes (Domino, Monol, Citrohan) created by Le Corbusier to create housing could be built in series like machinery, the most developed throughout his career.

The discover of his visual experience (ouvrir les yeux) of a space that was perceived in popular bars in Paris: two parallel walls double height including a mezzanine standing and has a large light into its free end. Le Corbusier recognizes the virtues present in this simple formulation, especially its ability to allow a wealth section, which adds freedom gained ground in their previous work with Domino structure, pillars and beams of reinforced concrete, free with no drilling ladder forging, following a strict constructive logic.

This prototype already reflects its name from the clear objectives that guided its design. Le Corbusier Citrohan called home “to say Citroen” as used to clarify, and also referred to as “machine for living”. These were obvious ways of referring to their main concerns in relation to that cell, that could be built in series as cars. They even proposed prefabrication, which reduced its “utillage” or the minimum necessary equipment for the benefit of the living spaces; that is, in short, the concept living as were the cars, boats and planes around the concept. 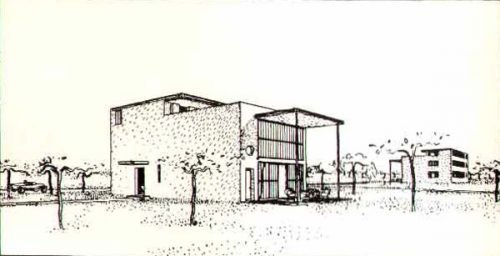 Sketch of a pre-built versions of the 1927

The house Citrohan 1 (1920) consisted of three overlapping floors. On the ground floor were located, across the living and dining areas, and in the background, the kitchen and service. On the first floor, was at the back master bedroom with private bath, and compared them to the boudoir, sort of antedormitorio or being intimate balconeaba on the emptiness of the double height living room. The second floor contained on the merits minimum two single bedrooms with bathrooms and front garden terrace, which offered the possibility to recover, on the roof, natural land occupied by the displacement of the cell was. This garden terrace would later become one of the five key principles of this first era of Le Corbusier.

The three levels of this cell were linked by a staircase that rose along one of the side walls.

On this type object, opted for the use and tradition, Le Corbusier began a process of successive purges in search of their ideal cell. The 1920 model had on his forehead the large double height window solved with an industrial carpentry, narrow vertical panels, such as those that could be found in the anonymous Parisian studios. Moreover, the central sheer volume of the cell had two aggregates: the lateral diagonal line the staircase and upper shoulder formed by the twin bedrooms.

The exterior staircase is absorbed by the master volume in a formal synthesis tends to reaffirm the primacy of that, becoming interior.
In contradiction with that gesture synthesis, Le Corbusier suppression test metal pergola terrace which tended to sketch a first reconstitution of the total volume, whereby the upper body of the bedrooms, to fuse with it, put it in crisis. This contributes to some extent the addition of eaves supported by thin pillars that takes full height of the facade.

Third version of the Citrohan house that presents a major innovation appears in 1922. All the cell, as it was described above, appears a raised on piles, thus generating a low ground level floor to house service functions: garage, pantry, etc.

Makes its appearance in this trial the second of the five principles mentioned above: the house off the ground leaning on piles. The so prepared cell is surrounded by a perimeter balcony, which will not appear in later versions. For this balcony can clearly see how Le Corbusier, in the successive stages of the process of finding a purified solution used to test elements which then finally dismissed for reasons of his own conception of a conceptual and formal synthesis. The balcony, which shaped an accessory that hindered their search for a pure and closed volume is deleted from their examples of domestic architecture.

In 1925 he presented to Le Corbusier the first opportunity to build your cell Citrohan.

The Frugès Industrial test series offers its proposal to build a neighborhood for workers and employees of its industry in the city of Pessac. The resulting cells are grouped a fourth version, this time economic, the prototype.

Born to face the solution of a program affordable housing in its real terms, Le Corbusier, reduces the surfaces of the prototype eliminates the double height and takes the elements of the cell to a minimum. The most common prototype is two cells connected by its rear wall, back to back, so to speak.

The ground floor of small proportions, no longer allows pilotis funny game. In an open hall is passed to a closed hall (possible garage), which part the stairs, this time crossed to the longitudinal axis of the cell, which leads to the first floor. At the top, this staircase separates the living room, small size, cuisine and service. On the second floor, the stairs turn separates the two bedrooms, occupying the entire plant, leaving no room for double height of the examples above. The only bathroom has been reduced to minimum dimensions.

The culmination of the staircase leads to a landing outside, from which another staircase, this time outside, leads to the terrace. It has two parts: one, covered with concrete and forward another pool, which sets the terrace garden itself. The large window corresponding to the double height no longer exists: it is replaced by two horizontally elongated windows that occupy the entire width of the front, one in the living area and one for the master bedroom. Appears here for the first time in Citrohan cell, another of its fundamental principles, the elongated window. 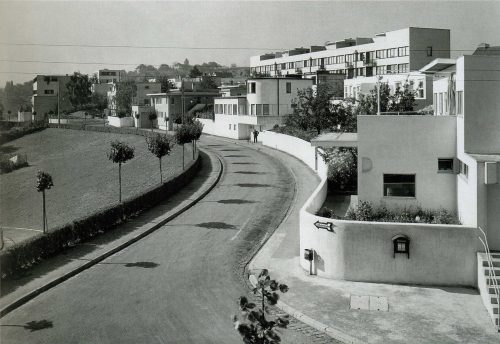 In 1927, Le Corbusier, is invited to the famous exhibition of Weissenhoff in Stuttgart occasion for its fifth version of the prototype, in all the most refined of the series senses. The elements are the same who had the third version of 1922, but refined and enriched by a greater design flexibility.

The ground floor access and freely dependencies resolved, after the visual curtain pilotis, by a path with semicylindrical volumetric projections. On the first floor environments consabidos living room, kitchen and operation are resolved with utmost simplicity by using three partitions, two curved, and a central home. The second floor is reserved as usual the master bedroom and boudoir balconeante. The use of curved walls solves acabadamente minimum subdivision design bathroom. This fifth version is remarkable in more ways than one. Strict compliance with the functional program, the finished resolution of all compositional elements using extremely simple resources, form a culminating moment in the series. While through the examples we saw the importance attached by Le Corbusier at the correct resolution of functional problems as a starting point for a valid architectural proposal, in this case the elements used for the resolution arrive at a constructive synthesis and full plastic.

The five points of Le Corbusier normative appear fully mature in Stuttgart. The use of pilotis, roof garden and the elongated window as known, the free and the free facade are now added.

The open floor plan is evident in the overall plasticity and functionality that manages its straight or curved walls, independently of the supporting role played by the slender pilotis. The free facade allows the appearance of large window of double height, elongated side windows and a small balcony shaped pulpit, as required by the functional program. In fact, as we shall see later, the free facade meant to Le Corbusier the possibility of freeing the mural envelope bearing functions, to order the full and empty in terms of geometric compositional criteria.

The total volume finally reconstructed as a pure parallelepiped without protruding through a beam that runs along the two free sides of the terrace, the primary form virtually reconstructed.

Thus we see through the evolution of Citröhan Mansion, as are met with perfect consistency conceptions of Le Corbusier: from an object-type which has its origin in the houses Parisian studio, a prototype is developed, which through a process of successive purges, can arrive at a synthesis which is the “perfect solution” universal ideal for resolution of the problem model.

Creep spaces should be noted, with the full aperture of the room to the outside and nuanced separation between rooms, forcing the tour exploring the whole construction, the free plasticity of internal fences, furniture, often concrete or embedded as part of the house, the contrast between the structural base case and the other elements of enclosure, and many other issues that make this home one of the milestones of modern architecture.

The floor slabs of the same module, lines of racks window factory, with useful windows of the same module. The arrangement according to family life: abundant light as intended room, the needs of the disadvantaged hygiene; the servants treated with respect.

In Citrohan house, the location of windows is especially subtle and can measure the height of the plants, thanks to endiduras rear gable and imagine the function room, thanks to previous windows and openings of different sizes.

The pillar structure of 0,25×0,25mts leaves among them a clear span of 2.5 meters longitudinally and transversely 5mts, allowing modulated and industrialization windows 1,1×2,5mts. Parallel to the body housing stays (of 5×11.75mts) is placed, unfragmented forging, amplitude 0,95mts ladder. The height of the pillars, beams 0,25mts between singing is 2,2mts.