The house Iranzo like the House Moratiel, is the architect Jose Maria Sostres built very close to each other, both in space, far from it about 100 meters, and at the time: the house is Iranzo concrete between March 1955 and June l956 and Moratiel between February 1956 and March 1957.

Is among the first to be built in Ciudad Diagonal, a development designed on the model of the garden city, by then a pioneer in the surroundings of Barcelona. It is up to a stage where the mentality of the experimental time is added to a larger conceptual requirement as a way of approaching what was then considered “worthy architecture of the era.”

This house like the Moratiel has great architectural value and a precise meaning in the work of Sostres, and if both kinds of interesting and hidden relationships.
At first from a house looked the other hand, this visual idyll lasted until 80, when the urbanization where it began to densification, to change the ordinance, allowing the occupation and the first increase the volume of the isolated house then to culminate with the construction of high body rows of houses.

Neighbor to the Moratiel House, is located on the street Apel-les Mestres No. 8-10 City Diagonal, Esplugas de Llobregat, Barcelona, Spain.

At that time (1955), this was an area of newly set up housing for a second home for the emerging bourgeoisie of Barcelona.

This urbanization. in mild slope, located west of Barcelona, near the university area.

For its topographical heights, the average level is 300 meters, allowing the contemplation of the Mediterranean Sea, above the city, a few kilometers.

In essence, the house Iranzo is a “home-belvedere” (Building or viewpoint from which you can see a broad picture). As Sostres himself would say, “solar and panoramic”

The sun and panoramic approach identifies the theme of this architecture that is resolved in a very open treatment to Noon and the valuation of superstores blind to the North.

To understand the process of project of the house Iranzo, it must be borne by three basic facts:

At home Iranzo, as the Sostres explained at the time the item was to investigate the difference in the volume relatively simple matter of housing, proposing an alternative to the merger of functions in a single volume.

In several sketches not dated, the architect shows mixed solutions which combine the typology in L open to the type of cottage from Breuer, as well as the ability to articulate two volumes, one of which is raised above the ground.

The distribution of housing itself, which occupies the top floor will cause the volume to each zone with a link to the relevant central staircase. This plant is perched on a base that houses a program assistant, to find the best guidance and able to contemplate the landscape to the sea and insisting on the theme of rhythm and articulation of the volume falling to the ground floor lobby, services and garage.

The theme is therefore bauhausiano home, emphasizing the correlation between function and space-volume.

Not noted for structural or advanced technical solutions, but it marks a greater concern in constructive ways and finished technicist, albeit modest.

The structure is set up as mixed with load-bearing walls and slab on rigid metal feet rights in H, reduced to a few elements, but expressive.

Lined with blisters white stoneware “tile and ceramic pieces at an angle of the same color for the exterior walls.

The metallic elements such as structure, or woodwork railing are painted in very dark green perceptually equivalent to black.

In the north facade, covering such switches, on the ground floor with views of brick walls with “butchered together.”

The bedrooms and ground floor units, as well as the separation between dining room and terrace, are equipped with roller blinds. No external shutters, only visors and small ledges so that nothing integrator overlaps with the parameters, not to be the exception to the windows that look to the east, which have supported blinds on sliding rails outside. 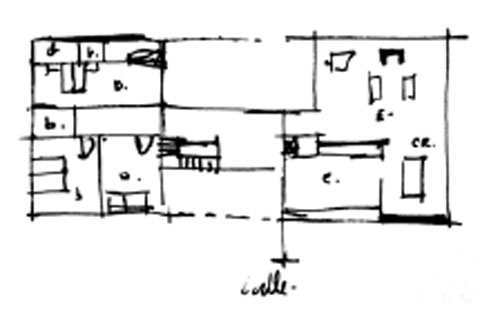 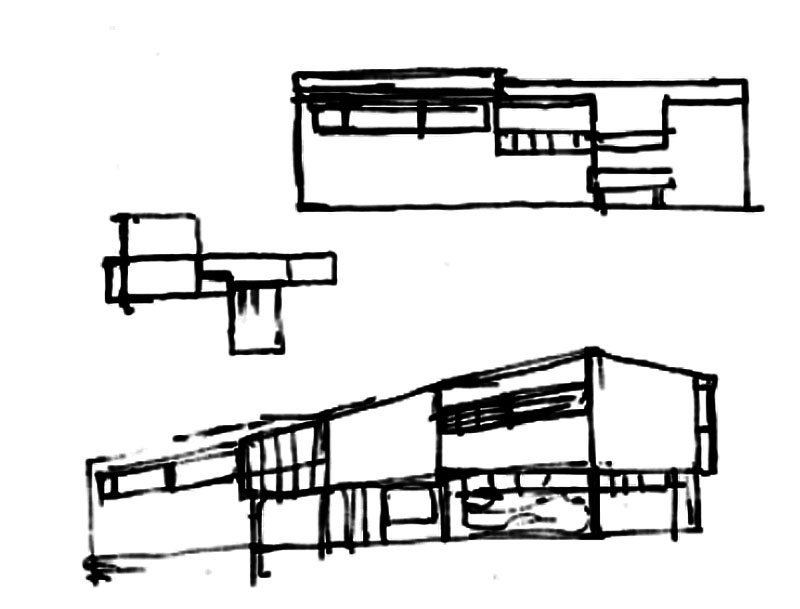 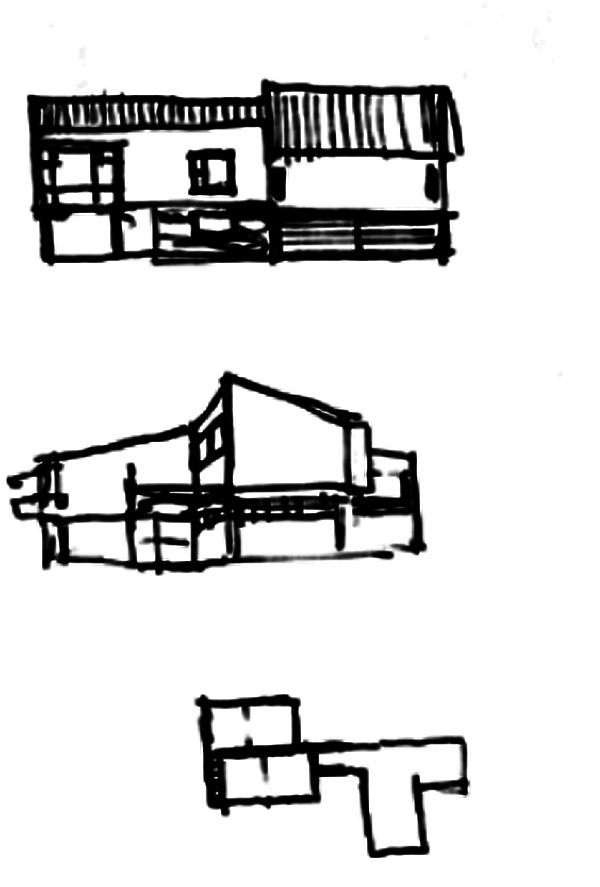 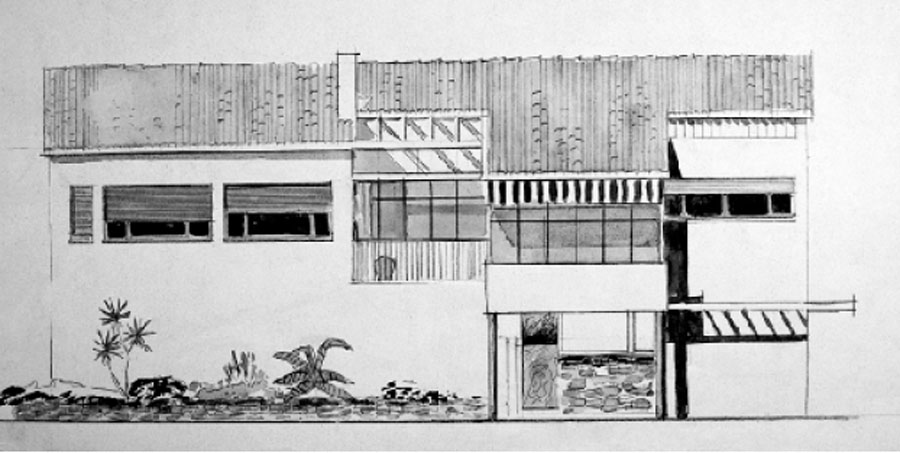 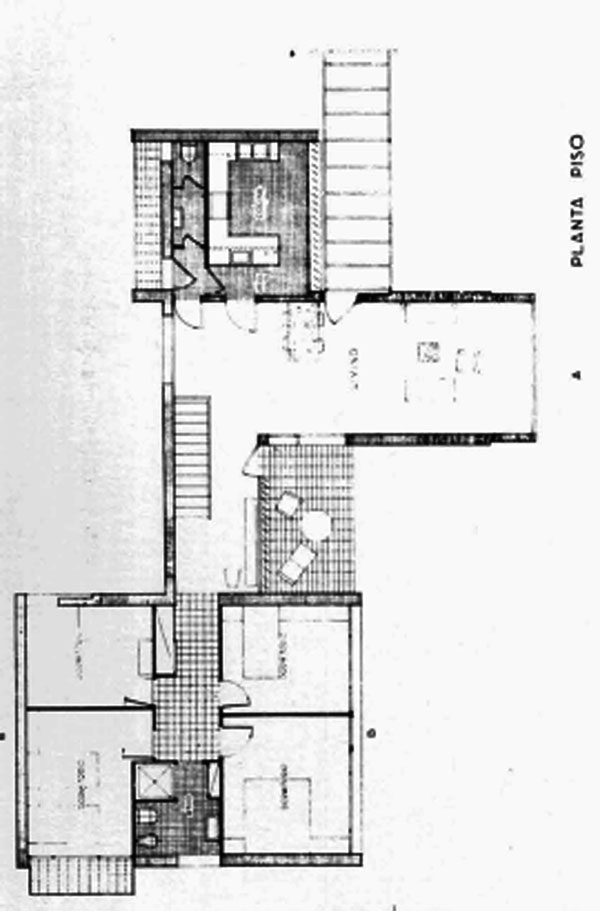 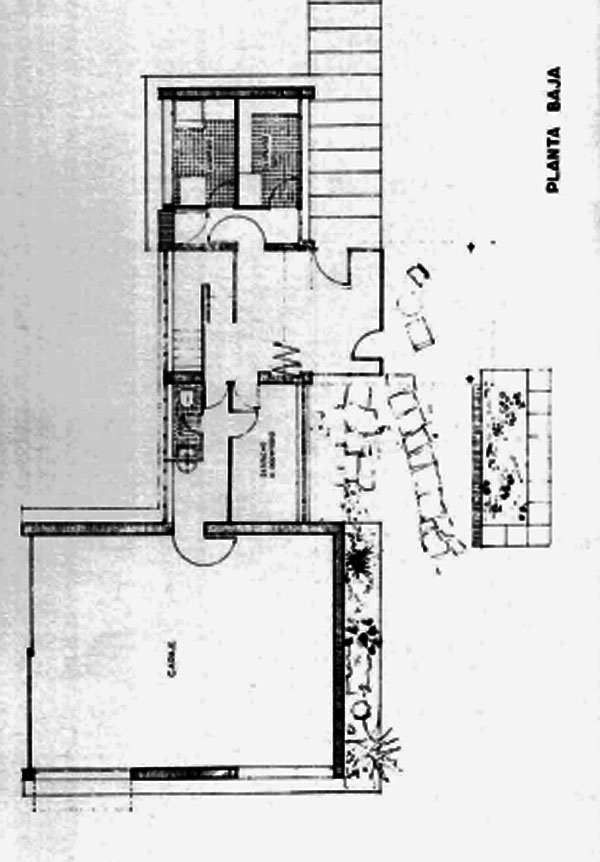 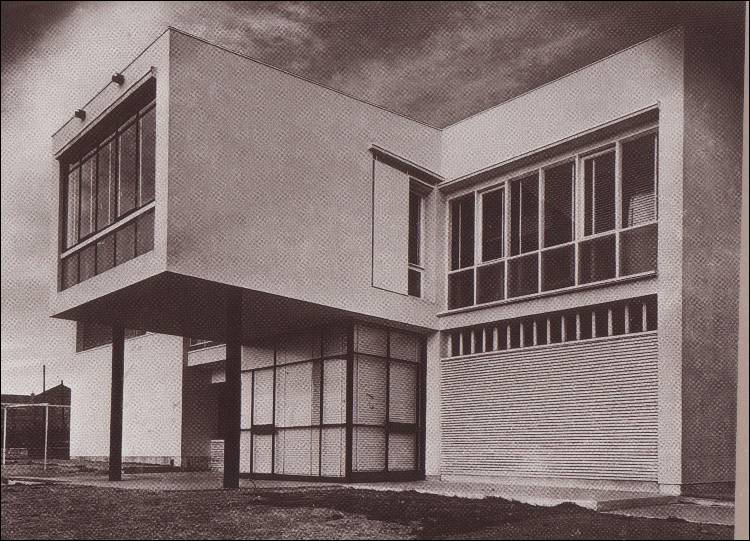 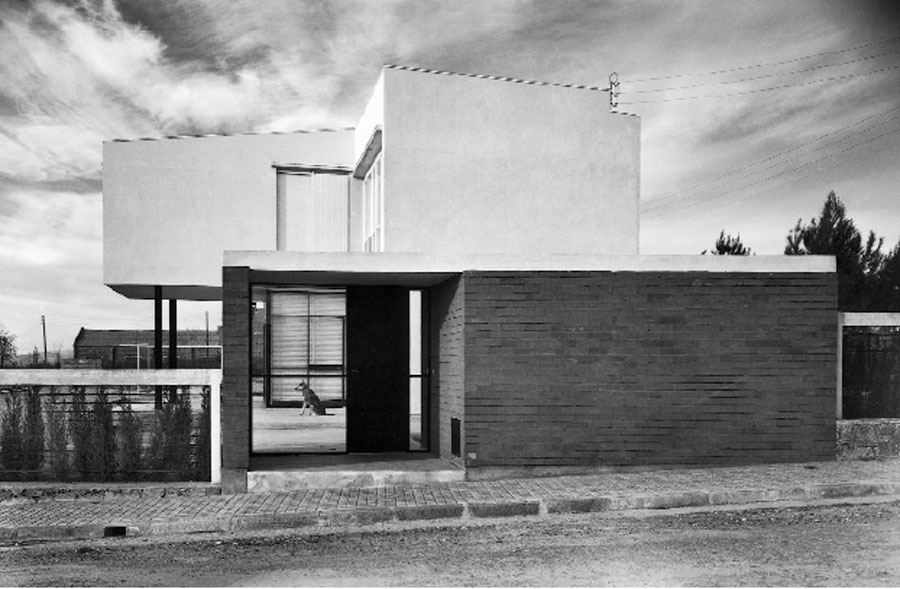 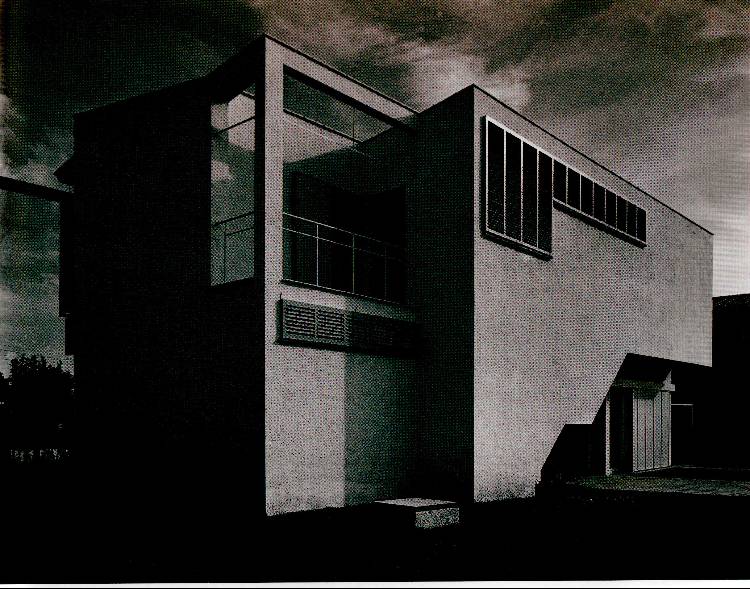 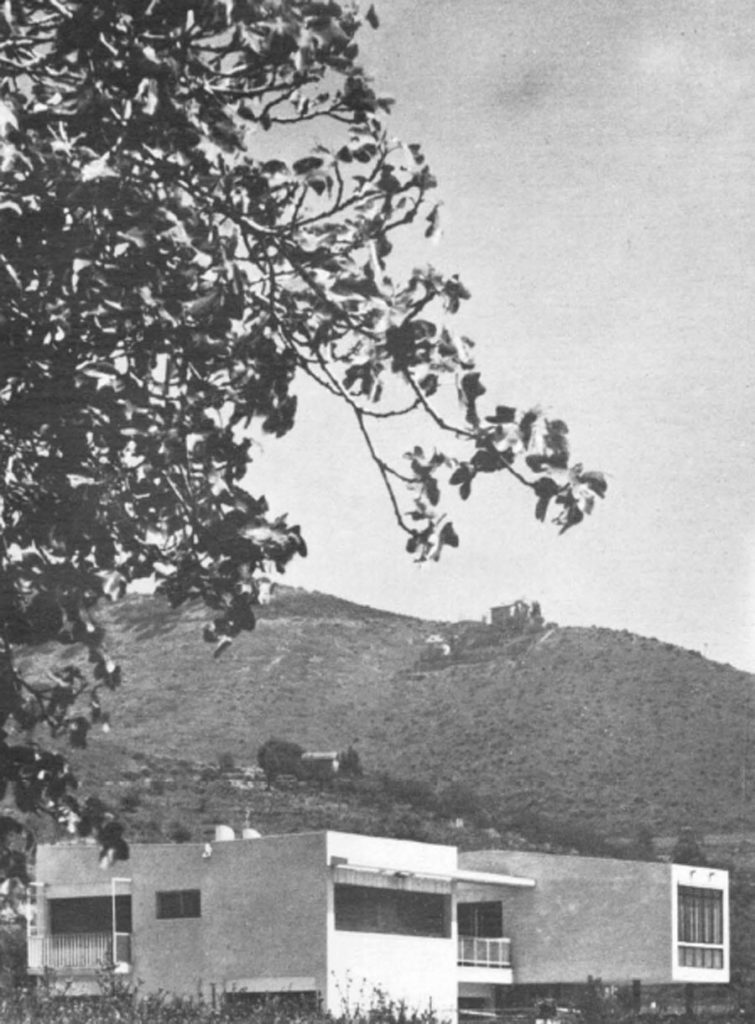 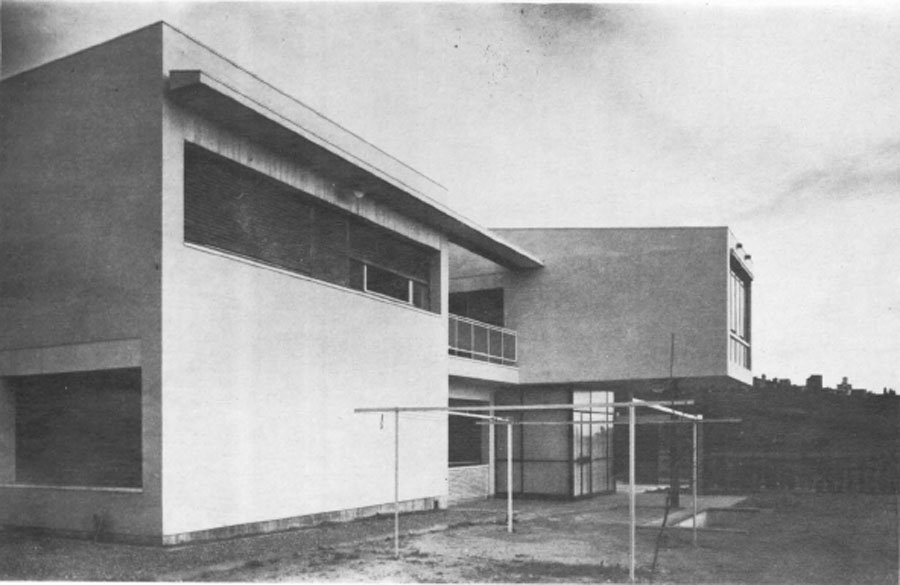 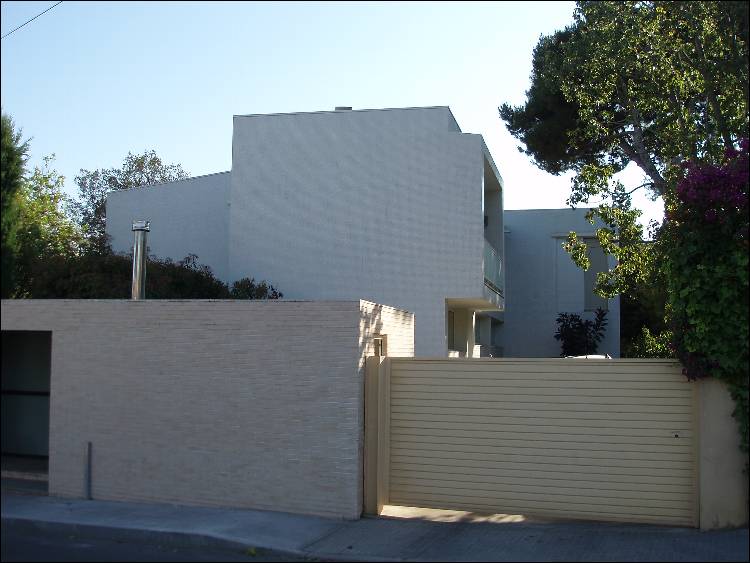