The Kyoto International Conference Center, or in abbreviated form the ICC Kyoto is a mega geometric structure of reinforced concrete. Although the project is relatively little known, it is a good example of modern Japanese architecture that reinterprets tradition in a unique way and get to have a strong presence in the place where it is, a natural and peaceful environment.

The project is the first architectural competition held in 1963 in Japan. The objective of this was to create a “conference center to function as a symbol of Kyoto. ” Of the 195 proposals the jury chose to Sachio Otani. This architect had previously worked with Kenzo Tange in the draft Hiroshima Peace Memorial Museum from 1955. After working with Tange, Otani established his own office in 1960.

A Otani was particularly impressed by the environment in which the project had to be placed, therefore, sought the best way to integrate the brutalist building in place. He succeeded through a series of concrete walks around the lake Takaragaike and carrying up the building. These trips were intermediate point between the rigidity and the firmness of the building and the natural environment.

Since the building as specified the competition was to serve as a symbol of Japan for everybody, the architect thought that it should incorporate both Japanese tradition and sophistication and usability of modern architecture. Thus, the triangular shapes of the building, which visually and conceptually complete each other, are a reinterpretation of traditional Japanese forms. Triangles with wide base, reminiscent of the shape of the surrounding mountains (Mount Hiei) while inverted triangles are related to the shape of Japanese pagodas.

The ICC Kyoto Opened in 1966 as the first building to international conferences promoted by the government of Japan. Since its opening the center has accommodated more than 16,000 events, among which the Conference on Climate Change United Nations (COP3) in 1997 (where the famous Protocol was signed Kyoto ) and the Third World Forum over water. It also houses academic meetings, corporate, etc. The center is renowned both inside and outside the country, thanks to its more than 10 million users has helped place Japan as an international leader in convention centers, the pride of the country worldwide.

The center has been acclaimed since opening both its operation and its architecture. In 1998 he was selected to be part of the top 100 public buildings, a project to commemorate the founding of the Ministry of Construction Japan. Likewise, in 2003, the Institute of Architecture of Japan included the resort in its list of the 100 best examples of modern architecture in the country. The selection was based on the aesthetics of the composition of lines and facades inspired by rationalist concepts and other features of the eighteenth and nineteenth centuries. The project was also chosen by the DOCOMOMO Japan as one of the 20 best modern buildings in the Kansai region. It also received the prestigious award from the Construction Business Association. 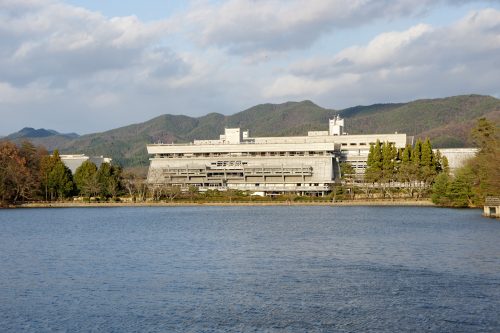 In the nearly half-century history of the building, the ICC Kyoto has helped the development of science and technology, culture, environmental conservation, and has pioneered industrial conventions in Japan, and a place of transmission information Japan the world. The center also wants to be a place for the arts and continue to play its role at the highest level of size, functionality and service. The building is located in a city with over 1,200 years of history and seeks to innovate maintaining the tradition, not only architecturally but maintaining own town hospitality, acting in good host for both guests and organizers of events. In the future the center wants to remain leader in meetings, motivation, conventions and exhibitions in Japan as throughout Asia, and contribute to the prosperity and peace of the world.

The project is located in the 422 Iwakura Oosagi-cho, Sakyo-ku, Kyoto, Japan. It is in the midst of a natural landscape shaped by Takaragaike Lake and Mount Hiei. You can reach the site by Karasuma subway line.

The competition for the building had these words of the Ministry of Construction, “Although the number of international conferences held in Japan has increased in recent years, there is little suitable for this facility in the country. Japan should actively encourage international for the rapid development of political conferences, the economy and the academic field, and contribute to international exchange. This conference center should play the role of new symbol of Kyoto, the city of international cultural tourism, which can be presented with pride to the world. ” In the jury there were important figures as the architects Shigeru Ito (President), Kunio Maekawa, Gunpei Matsuda, Takeo Sato, Kenzo Tange and Kenzo Higashihata.

The architect wrote these words referring to the location where it should place the project: “I felt ancient and elegant Kyoto legend on stage Takaragaike Lake with Mount Hiei rising majestically in the background. ” Otani’s style is heavily influenced by natural forms and structures. The design reflects ICC Kyoto basics of Japanese tradition that are closely related to the harmony of nature.

“An international convention center is extremely important to welcome people of different cultures from around the world instead. Therefore, the building should reflect the traditional Japanese forms and sophistication and pragmatism thought of modern architecture. ” – Sachio Otani

The building Otani therefore be defined as a meeting place between cultures in the midst of nature. Also as a place of submission of Japan to the world, both architecturally and ideologically.

The project was designed by Sachio Otani following an unusual hexagonal pattern. This solid building must trapezoidal available to walls and pillars of reinforced concrete forms and seals floors, at angles of 68 degrees. This uniqueness of the building influences the interior and exterior volume reduces the building (creating less impact on the environment) while not reduce the useful floor area.

70% of the space is dedicated to building lobbies and lounges. They are illuminated by windows that offer splendid views of the surroundings.

The first expansion of the building is due to increased needs it. In the attached conference room, a media center and banquet hall called Sakura was included. The work was completed in December 1972. He later added another ballroom, since the spaces it had was not sufficient to meet the demand of the events. This new hall is suitable for conferences as well as exhibitions and various events. The construction of this new space began in July 1983 and ended in April 1985.

The building has a main conference room, with capacity for 2,000 people; a series of smaller rooms adjoining conference room with seating for 1,500 people and a ballroom. The large conference room and adjoining room with facilities for simultaneous translation into 12 languages. Because is there a convention center hotel in the vicinity, the Grand Prince Hotel Kyoto. 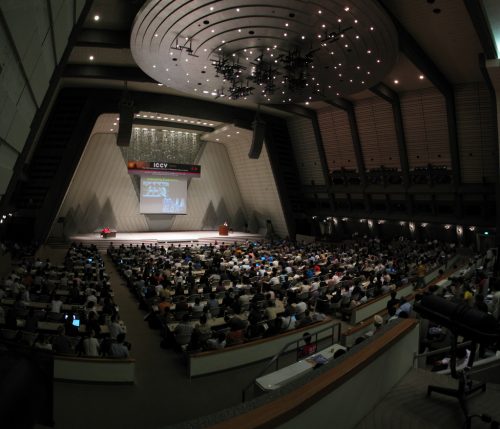 This room has a trapezoidal shape symmetrical and occupies four floors. Inside a stately and formal atmosphere that makes it a good setting for international conferences breathe. On the roof there is a relief in the form of disc that suggests the shape of the earth on those attending the event. This disc serves as decoration and light reflector. It also hides the floor beams providing dynamism to the interior space.

On stage is a series of aluminum bars ready to place national flags. These being located near the seat of the director, help narrow the scope of the stage. The bottom of it is decorated with a triangle made from aluminum parts of different shapes and size. The design is an allegory of people from different cultures and parts of the world who gather in this room.

The stairs that connect the stage with the orchestra go from one end of the room, unifying space and wanting to show the direct and easy exchange of ideas that the center aims to provide.

The architect said about this space: “The main living area consists of three elements: a space for delegations, a space for direct and a space for attendees. It therefore has the same function as an open and public town “place. For Otani, therefore, the main hall is like a square in a city where the exchange of ideas and is surrounded by spaces and buildings with different uses occurs.

About 70% of the whole is dedicated to lobbies and lounges prior to the conference. These spaces proved very useful during the Conference on Climate Change United Nations (COP3) in 1997. When the negotiations were deadlocked and the deadline for agreement approached, the director of the conference suggested that the parties discuss on matter in these spaces. Thanks to the more relaxed atmosphere of these places, their amplitude and their views in just one day desencallaron negotiations and managed to create the Kyoto Protocol.

The lobby is characterized by its V-shaped pillars. Light enters both directly reflected on the ground, and indirectly through a system of indirect light on the ceiling. This combination makes the space has a beautiful and serene look. Otani design this space for nature to mix with the formality of the architecture and interior design.

“Formal discussions are held in the conference rooms. Informal meetings, discussions and communication are developed in waiting rooms, which are as open public spaces in a city “- Sachio Otani

From these words it is extracted for Otani conference rooms should be a more formal setting, while the previous meeting should be informal spaces that help the success of the meetings.

The interior design of the project was conducted by Isamu Kenmochi (1912-1971).

“While the structure of a building is fixed, furniture acts as a mobile tool parts within a structure. Essentially, the furniture is functional and space between human and architectural space. The chairs in particular are an essential tool of modern life that come into contact with us as much as it does the clothes. ” – Isamu Kenmochi.

When Otani Kenmochi commissioned the furniture for the ICC Kyoto, the architect taught him some building plans to Kenmochi. This, to imagine not finish the space clearly Otani asked to teach him the works. Kenmochi was very impressed with the scale of spaces and at first doubted his ability to create furniture that mediate between human and architectural scale. After his second visit to the site, once covered the space with the concrete structure, and Kenmochi Otani decided to use wood and soft materials for hexagonal chairs. Thus through the materials of the furniture a warm welcome would be given to visitors. Due to the large lobby decided to make a second seat design. They would be faced with views of the lake and have a more curvilinear forms. Both types of chair would balance each other and the space of the room.

“Formal communication takes place in the conference but informal communication occurs in the waiting rooms. Therefore, the chairs of these rooms should make the function of bringing people together and create an atmosphere of fluidity and movement within space “. – Sachio Otani

Kenmochi also designed different types of tables and chairs for the conference. The designs ranged in rectangular shapes and curves depending on the arrangement and size of each room. The weight and strength of the seats were taken into account, as they should be lightweight but still fit neatly into the “long and large bodies of foreigners.” Inu Yarai the system of traditional Kyoto Machiya house was also used to design the separation of spaces.

To counteract the cold might look like using this material wealth we chose to use carpet in the interior floors to add warmth to spaces. The seats in the lobby were also carefully chosen to promote this feeling of warmth.