Map of the damage caused by the bombing

This project stems from the Second World War, particularly after the dropping of the atomic bomb United States of Hiroshima, Japan. After the bombing the government proposed a plan to rebuild the devastated area but the council did not have sufficient funds to carry it out. With the law of 1949 for the construction of the city of peace, government funds and the transfer of this land, they enabled the project avanzase.
A contest and architect team convened Kenzo Tange won. The project was changing during the design process, from version Contest 1949 (published in the number of October-November issue of the journal Kenchiku Zasshi), through the 1951 version to Tange taught at the CIAM 8: heart of the city, toward the humanization of urban life (International Congress of Modern Architecture), until the final version.

Each year, on the anniversary of the bombing, a ceremony and various activities are held in the park. The Hiroshima Peace Memorial Museum, opened in 1955, advocates the elimination of nuclear weapons. It also symbolizes the will to reach permanent world peace. The building is divided into two zones, the eastern part and the main building. In the eastern part it shows visitors the history Hiroshima before and after the nuclear bomb through panels and videos. In the main building one can see the effects of nuclear bomb fall on August 6, 1945, he caused.

The Museum is housed in the Peace Memorial Park, an area of 120,000 m2 where prior to pump the political and commercial heart of the city it was Hiroshima, Japan, a fact that caused this place were chosen as targets of attack. Four years after the bombing was decided that the place does not house a new development, but in the memorial facilities they would be located. The park is also famous for being a good place to see the cherry blossoms.

This was the first major project that was commissioned to Kenzo Tange. A year after the attack, Tange and his assistants visited the scene. They met with such devastation decided that the place needed a symbolic vision for reconstruction.

The geography of Hiroshima is defined by the Chugoku mountains, running east to west, and Otagawa River, which runs north to south. Based on this provision, Tange used the idea of axis, east-west and north-south, with the people of the city was accustomed, to create a dynamic quality to the city. The east-west axis hosted the boulevard de la Paz, the heart to the activities of citizens. In the north-south axis started the Atomic Bomb Dome, the cenotaph for the victims of the bomb and the Peace Memorial Museum. Thus, the A-Bomb Dome was used as a symbol of the disaster and also as standard for reconstruction. In some letters of the time the project between architect and administration, he described his idea of the park as “a basis for peace activities.”

Tange Japanese also used a symbolic element in the sculpture park. This has the same frame shape having the tombs of the rulers of Japan. The sculpture symbolizes the tomb of those who died in the atomic bombing of Hiroshima.

Tange 5 combined architectural principles of Le Corbusier with traditional Japanese, such as screens to the sun or modular facades aspects. In the Museum building architect he wanted to show human strength to overcome the disaster and ruin leaving a free space under the building and elevating on piles. This aspect is also related to traditional Japanese architecture. The stores were usually built high on stilts to protect crops from moisture and animals. Museum piles also serve to create the entrance to the boulevard and places of worship.

“The building stands on pillars, its structure is a concrete frame. The entire complex has a monumental quality. There are two outbuildings, one on each side, consisting of a hall, a hotel, exhibition gallery, a library, offices and a conference center in the west; and an auditorium with capacity for 2,500 people in eastern… Together they form a kind of screen to the Plaza de la Paz, which extends north, where up to 50,000 people may gather around the Peace Monument. The monument… in the form of a hyperbolic parabola, meeting modern trends and technology with the ancient form of the Haniwa, traditional tombs of the rulers of Japan. ” – Kenzo Tange in Udo Kultermann, Kenzo Tange : Works and Projects.

The museum certainly shows the influence of modern architecture Le Corbusier, so the use of reinforced concrete for the use of stilts. A Tange loved what Le Corbusier represented, and thought that this great architecture in relation to the social and human scale was what Japan needed and what is needed to bring.

Inside the museum is specially designed to transport visitors to the drama experienced by the city with the atomic bomb. Through technical data and testimonies shown theatrically, the moment of the catastrophe is evoked.

The buildings flanking the museum, library and conference center, were joined by bridges to the museum in 1995. 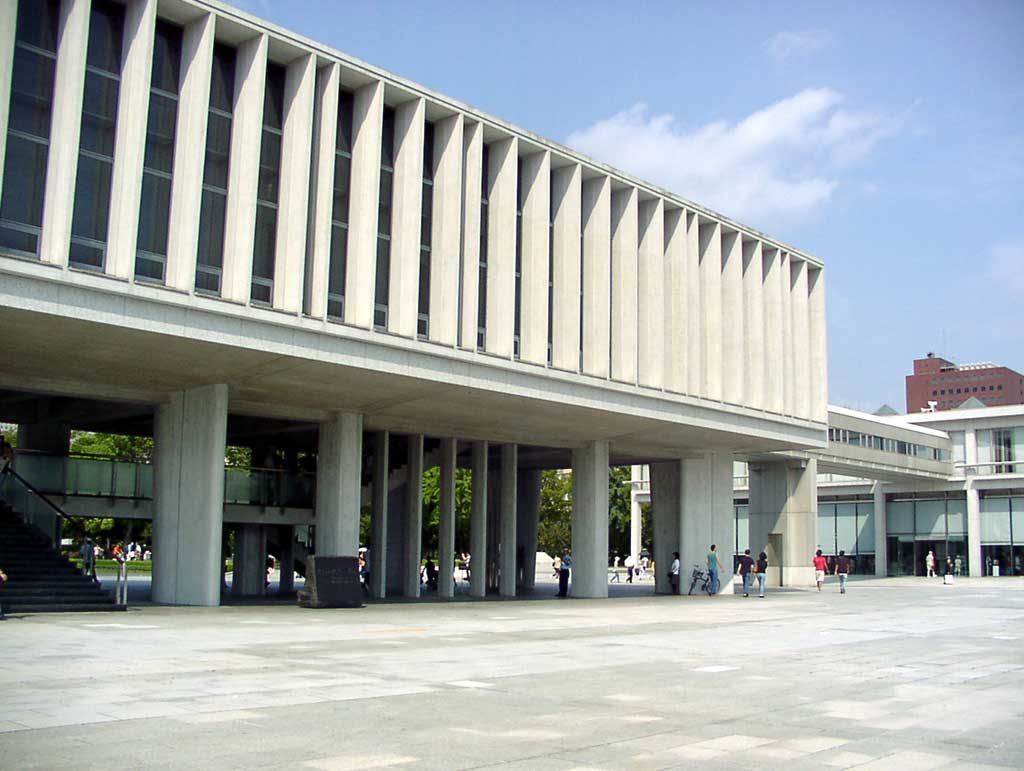 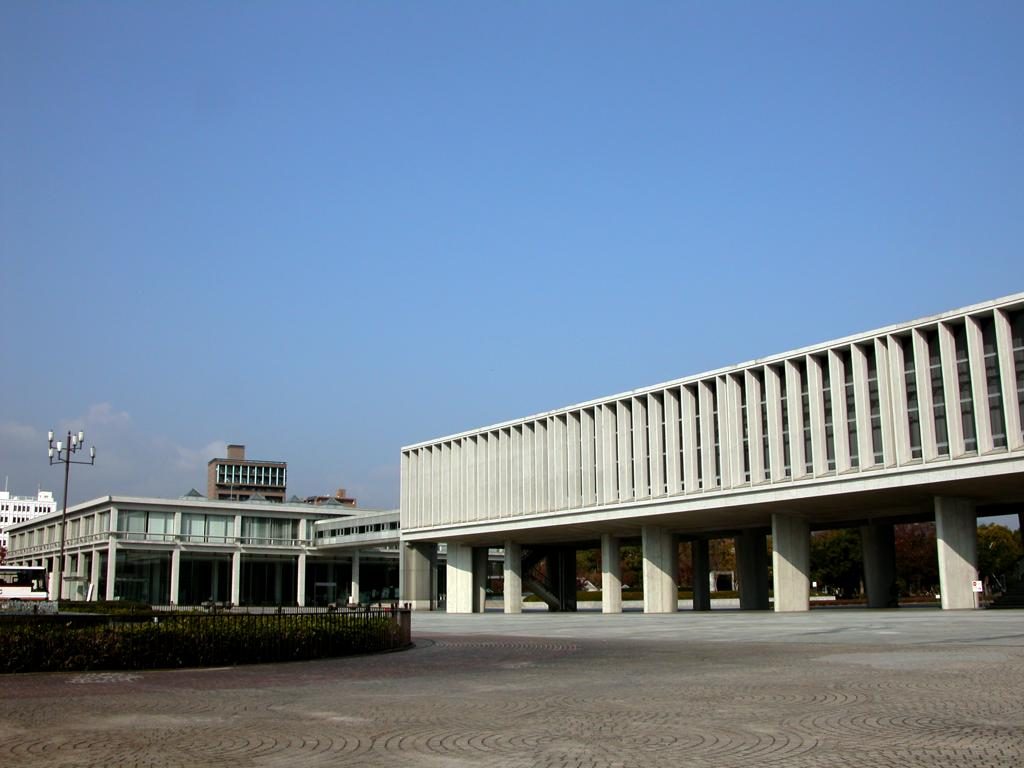 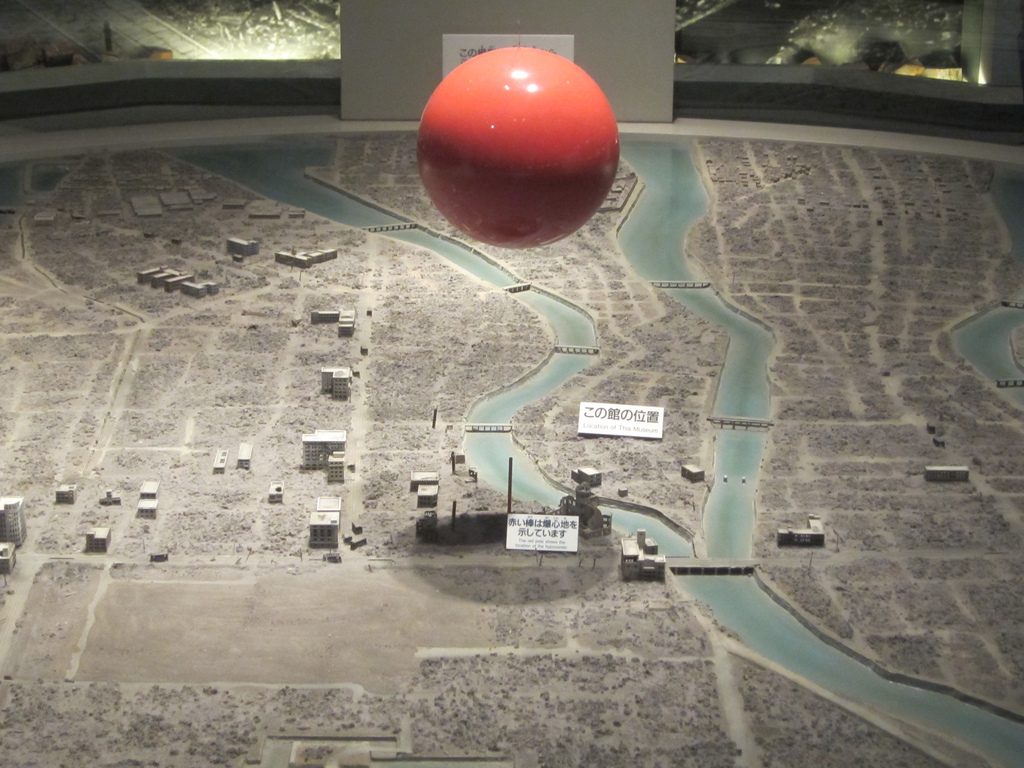 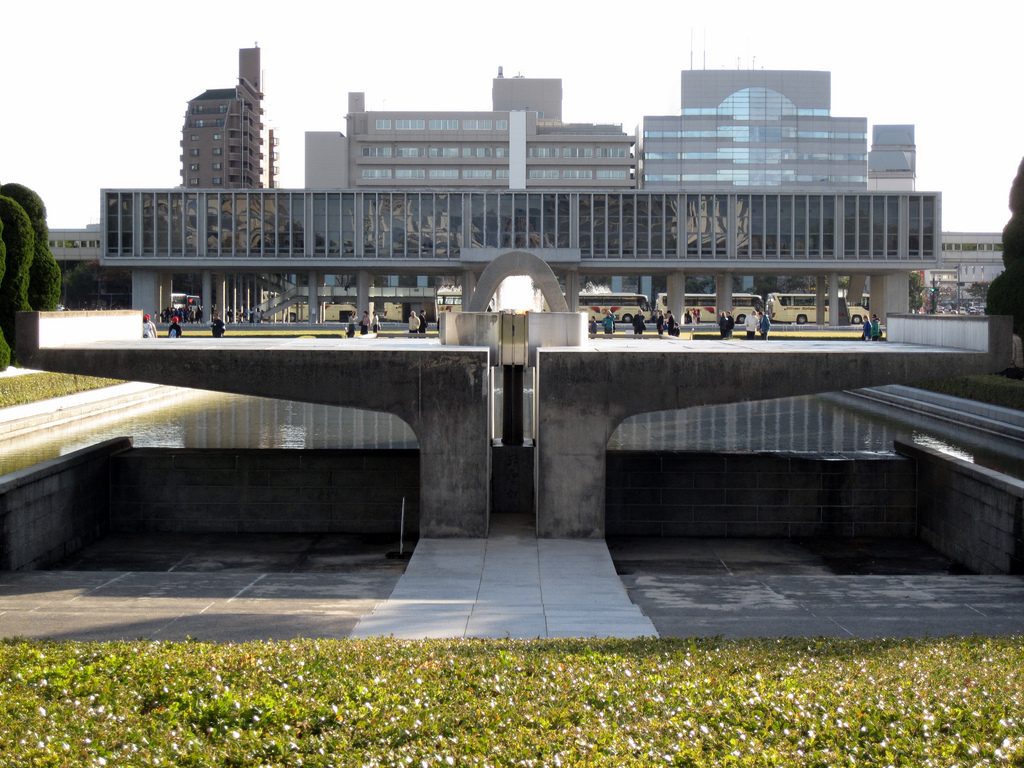 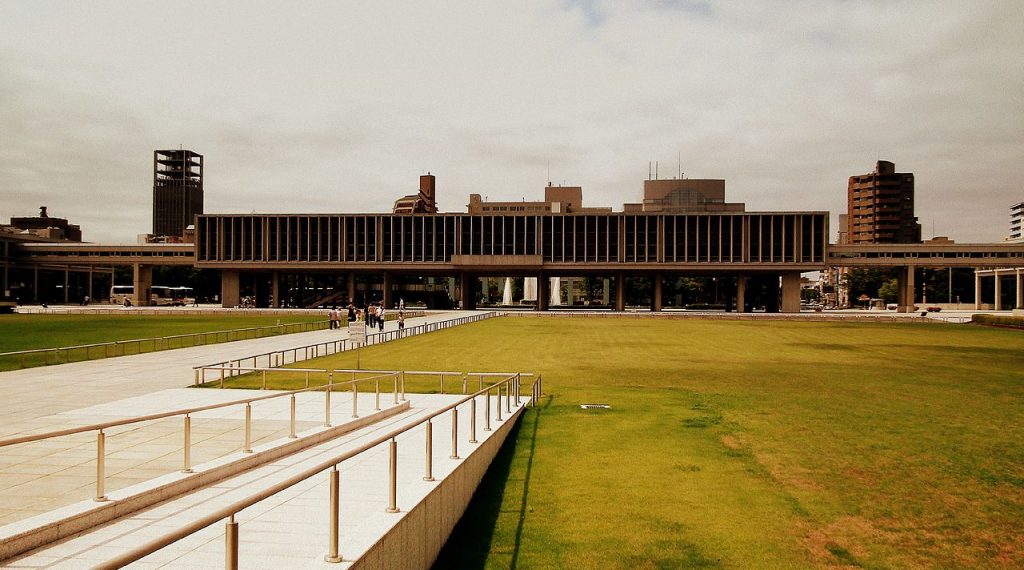 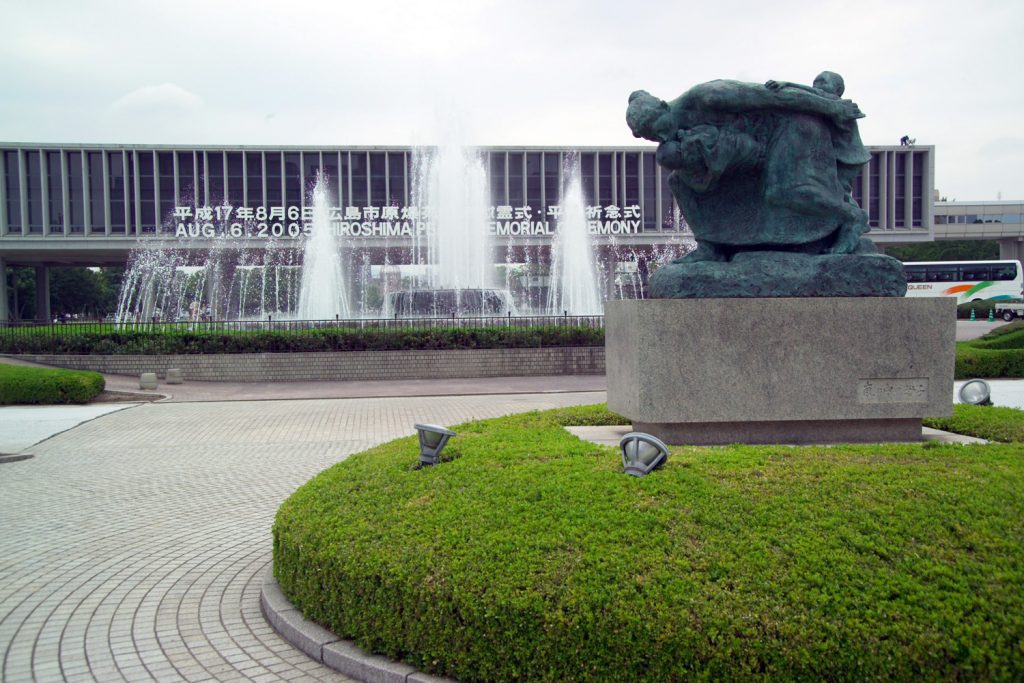 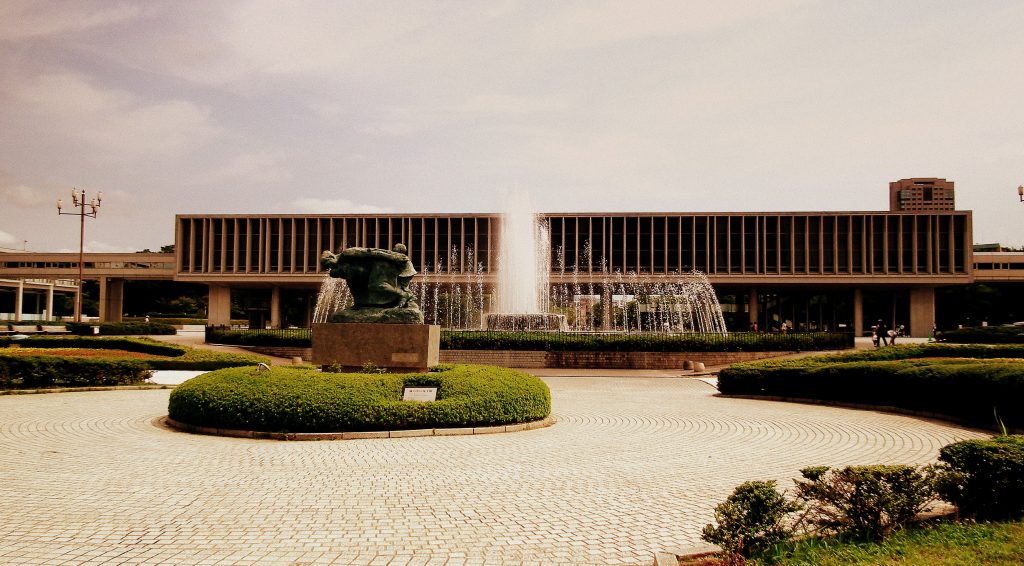 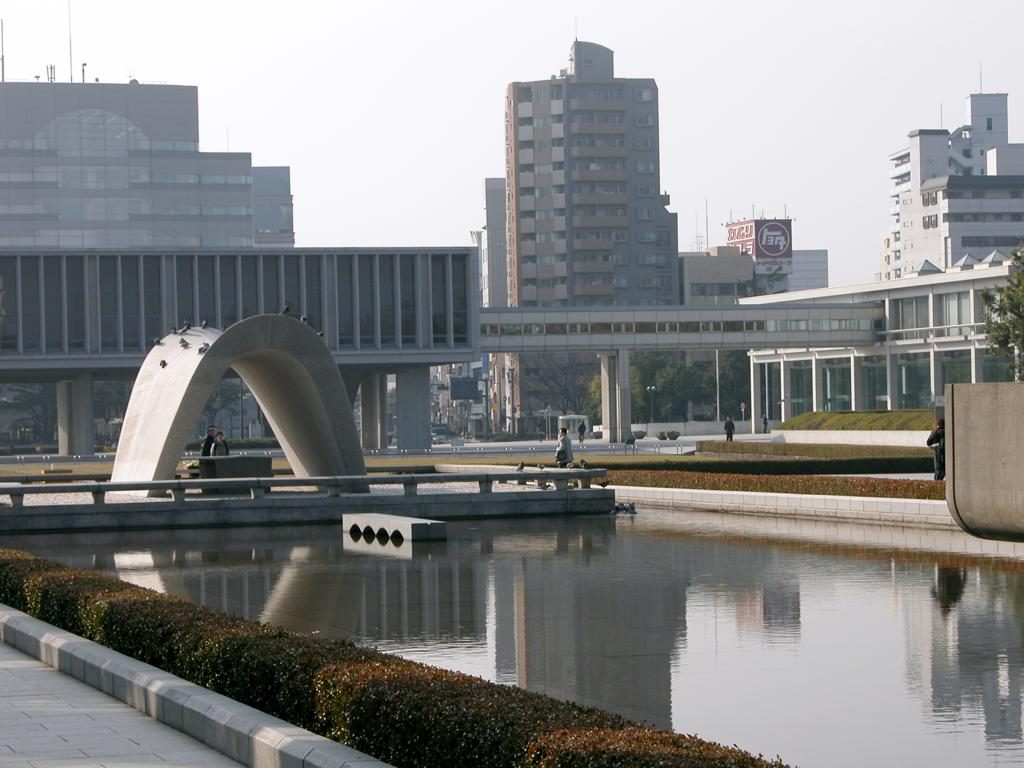 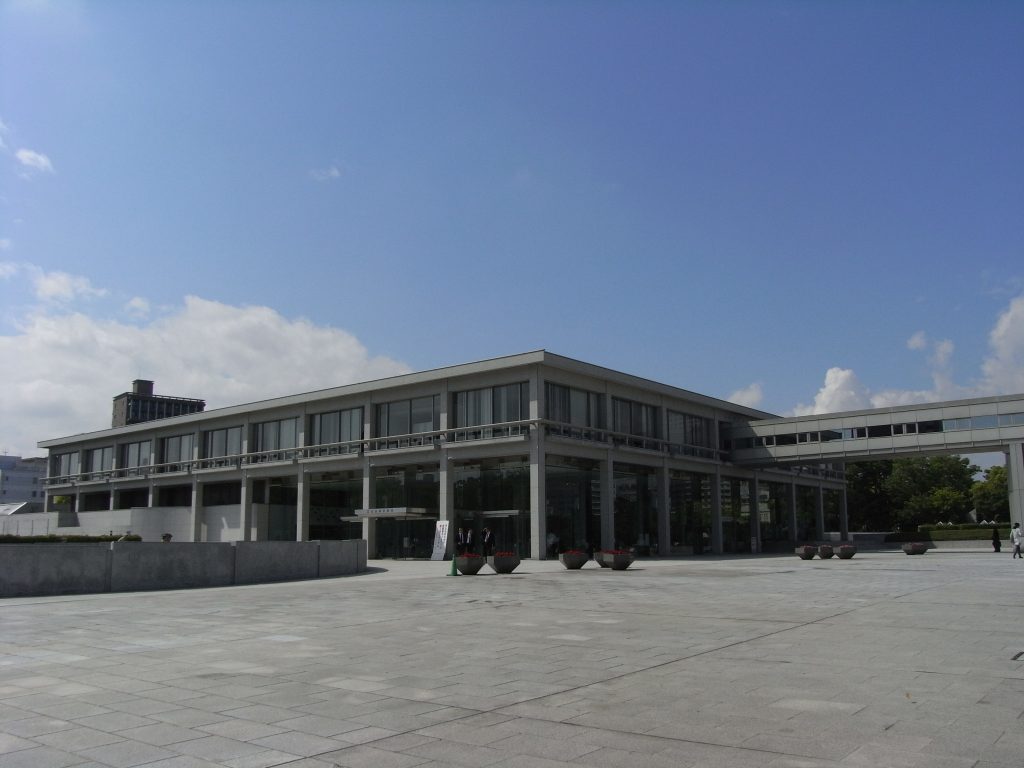 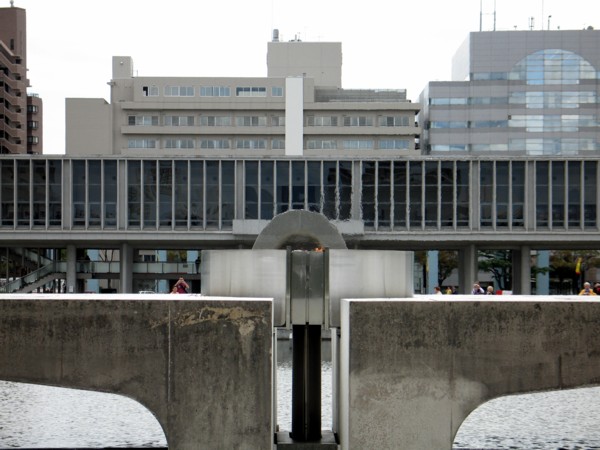 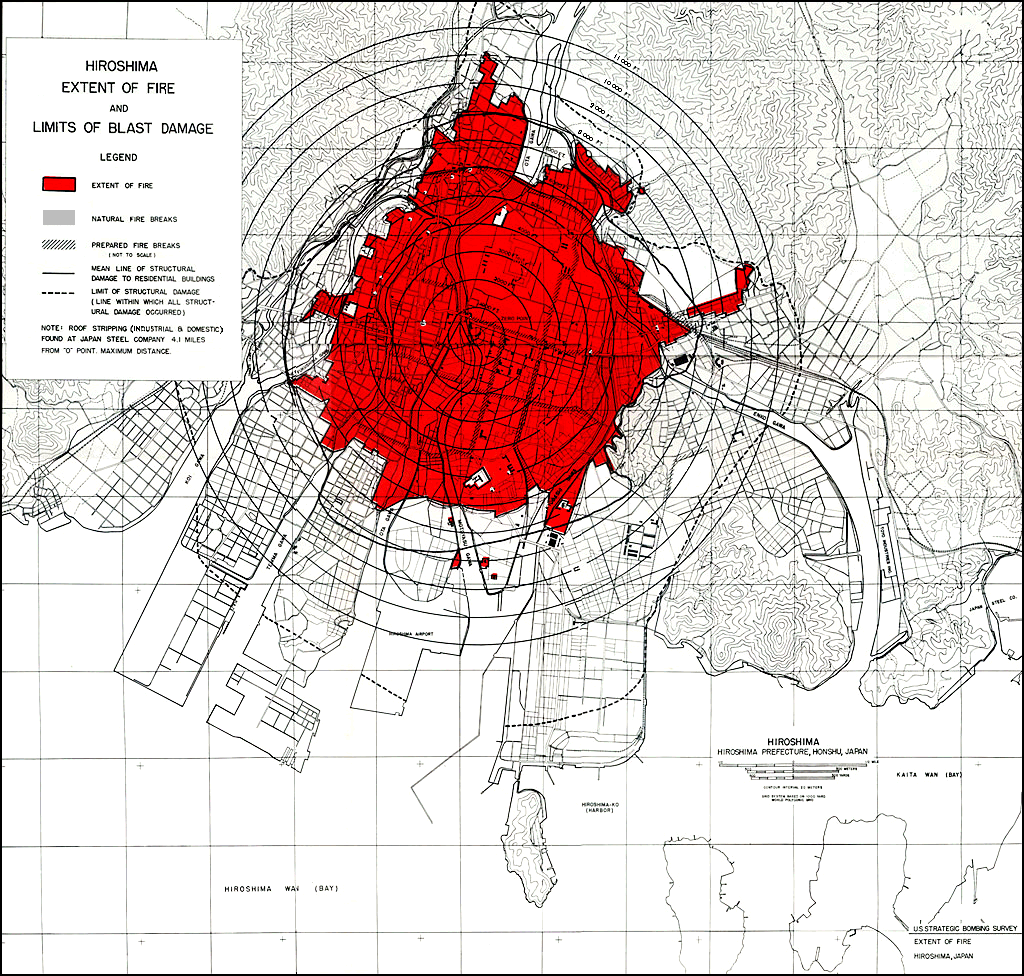