Completing the project took more than a decade, but Kahn in his last trip to India in 1974, before his death to return to the U.S., could see most of the finished building your project.

The scale for this great campus was determined by the Indian government and the western state of Gujarat and was inspired by the Harvard Business School. The commission initially offered to a local architect Balkrishna Doshi Vithaldas, but that he had met Kahn in Philadelphia and was aware of the importance of their work and the importance that the new project would have both Kahn and for India, recommended that be given the new project to American architect.

The magnitude of the project, red tape, climate, time difference, timing, cultural differences and many other topics, led to that work started before Kahn finished his designs. In 1969 the Gujarat government asked Kahn to undertake a visit to India, which was infrequently, otherwise the project would be in the hands of Doshi, who was the local manager. Kanh made the trip but from that time was the architect Anant Raje force and the same Doshi, who undertook to continue the project until its completion in 1974, according to Kahn’s original quality.

Model of the project

The implementation of this program required different types of buildings, a school, dormitories for students and housing for teachers and service.
In this arid area of the country and in an area of 26 hectares fairly flat, Kahn outlined a map of inherent scale and geometric forms and related to the institutional hierarchy of the various buildings and programs.

Contrary to the minimalist aesthetic dominant in the period in which the buildings were all equal and only identified by signs, buildings Kahn told of their appearance goals of their programs, allowing the juxtaposition of types, a massive monumental school sharing space with an exterior repetitive and lower on the residence buildings. The only unifying element of these two formal types was the use of diagonal wall surfaces.

It was built in an isolated rural area many miles away from the first point urbanized city of Ahmedabad, one of the most populous in India, in Gujarat state, west of the country and bordering with Pakistan to the northwest.

In this city, which enjoys an intense cultural life, commercial and political Kahn project completes a series of great works of architecture, both ancient and modern.

Kahn conceived the Indian Institute of Managemnent as a mixture of austerity and majesty, including spaces for informal interaction and achieving a balance between modernism and tradition, which captured the timeless spirit of India.

Facilities include wide corridors that serve as semicubiertos transitional spaces in the complex interaction between teachers, students and visitors.

Distinctive features of these buildings include the many square arches and brick structures on the walls with carved circles.

The special social conditions and site determined the organization and layout of spaces.

With the location given to the three main parts of the whole school, the residence of students and teachers houses managed to maximize the airflow and thereby improve ventilation. The intense light and heat were attenuated by covered walkways, light boxes and interior courtyards. All these elements are integrated in the whole plastically.

The relationship of the plant shows the relationship between the school and the different residences, creating both a constructive and functional unit.

This artificial lake divides asymmetrically and residential buildings for teachers of students and school.

The school is organized around a courtyard with an amphitheater.

It is basically a building made of brick, traditional Indian materials. In some walls and brick facades combined with concrete, resulting in a mixed construction and ornamental. 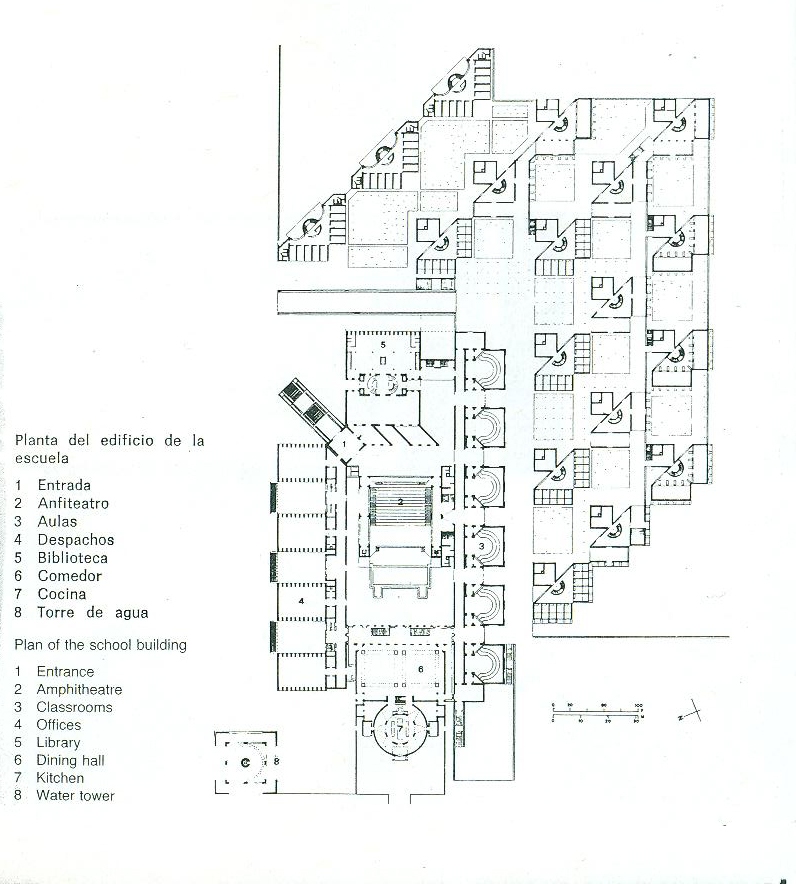 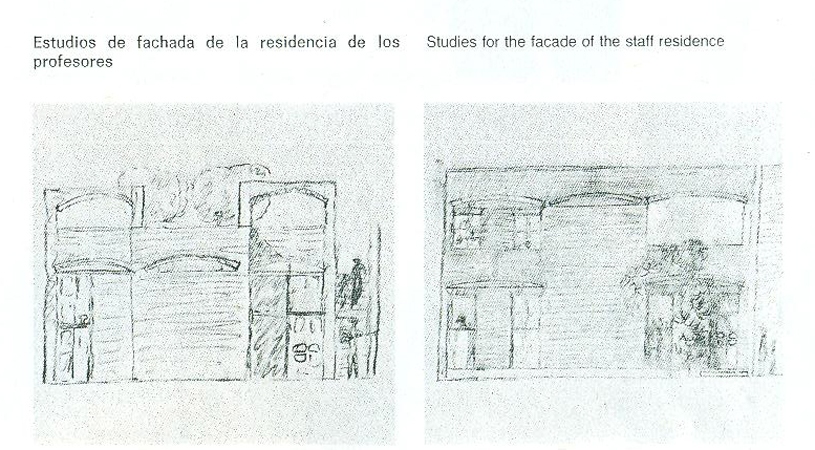 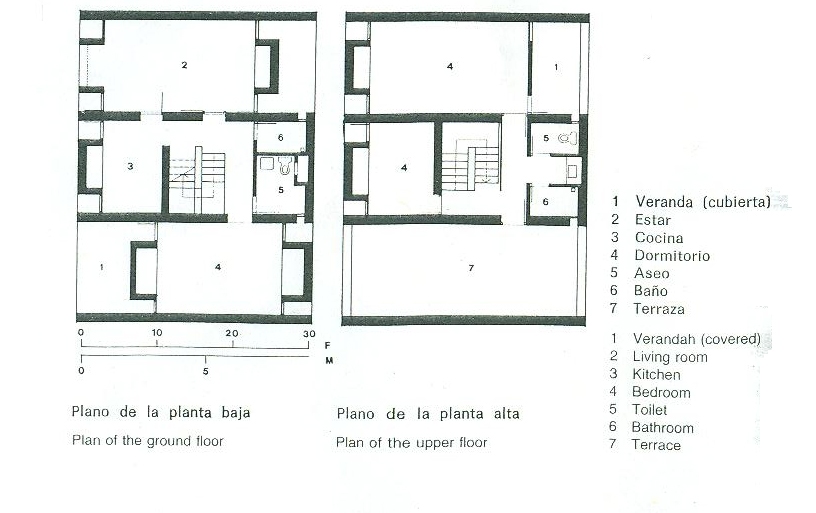 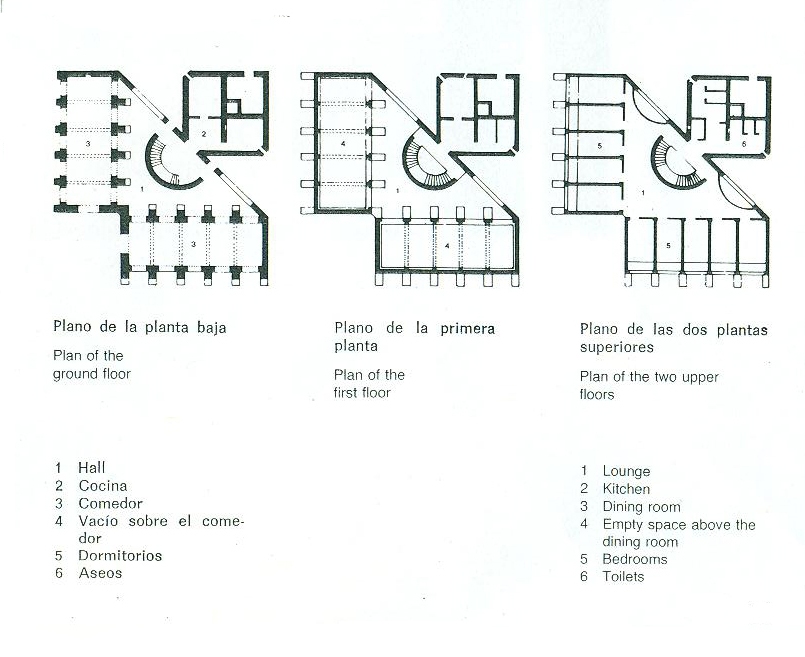 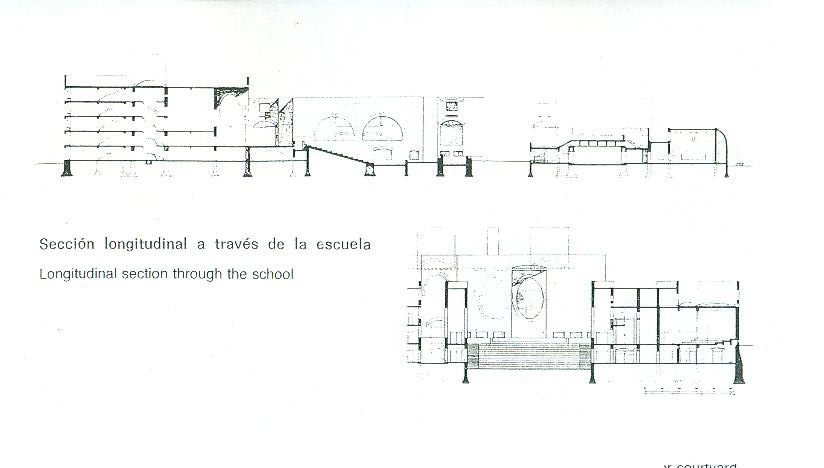 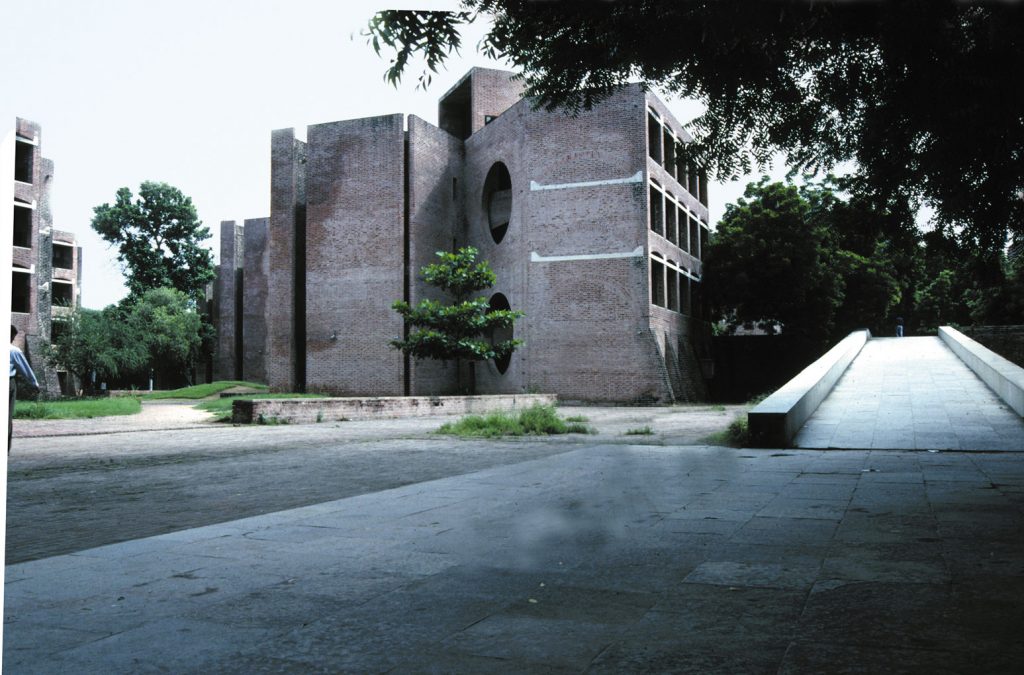 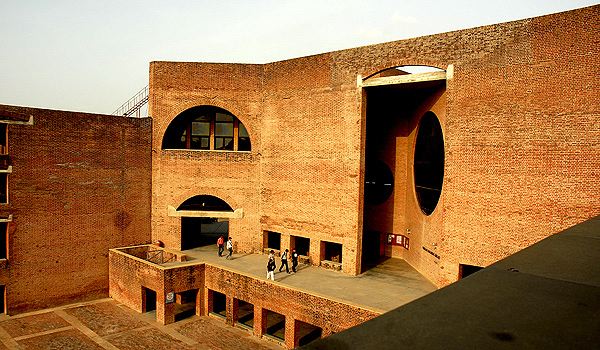 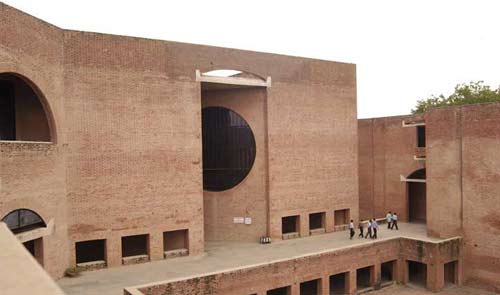 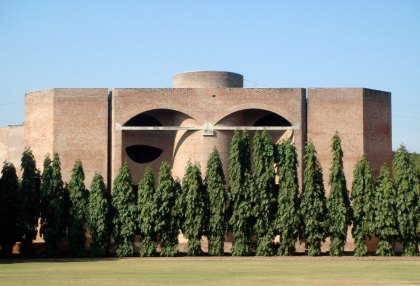 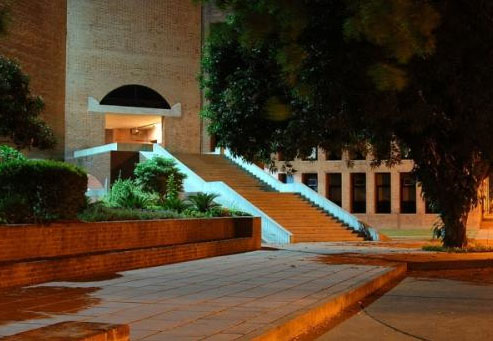 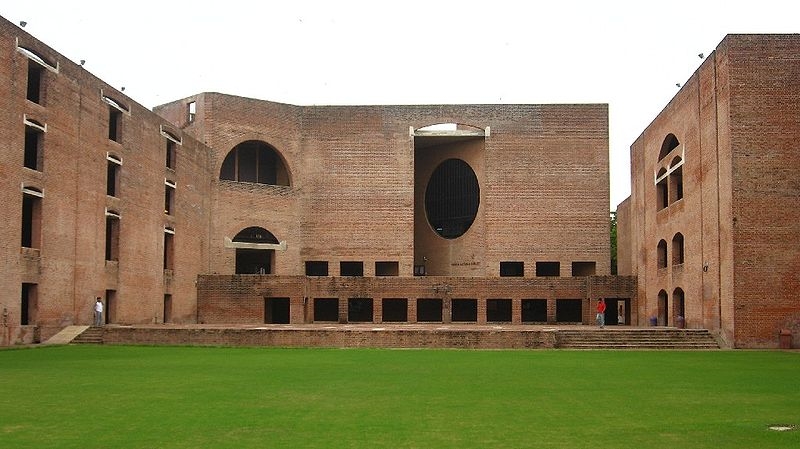 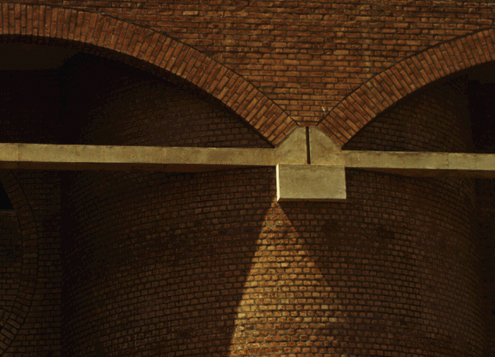 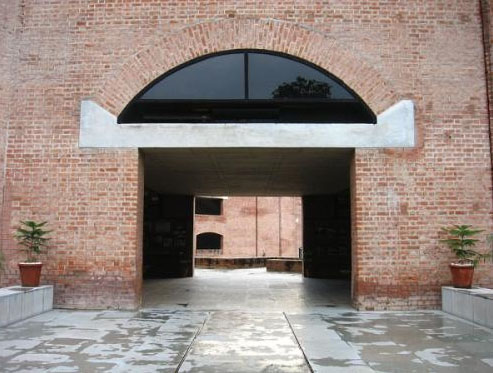 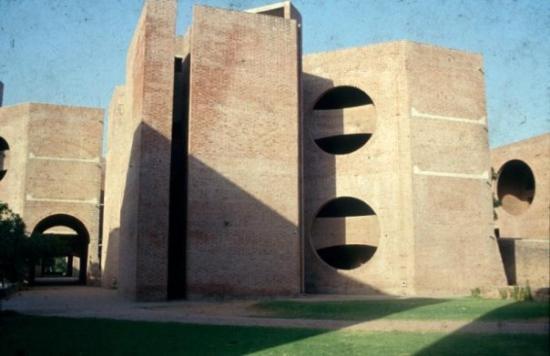 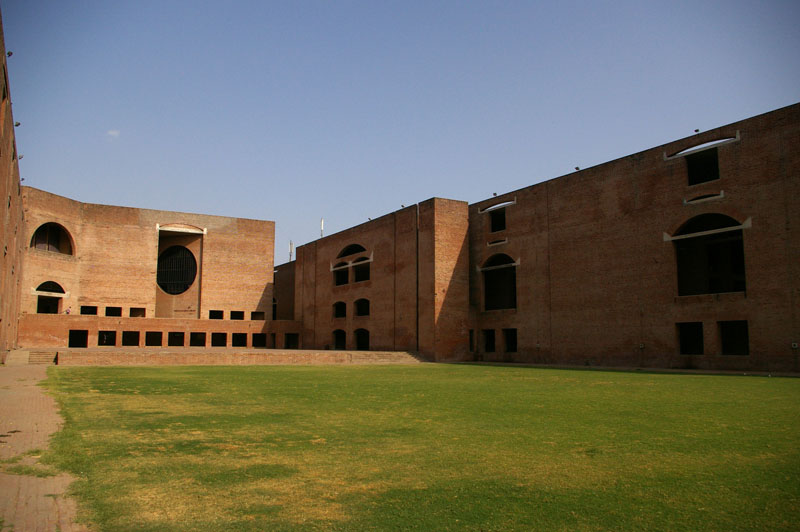 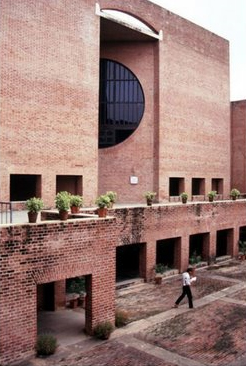 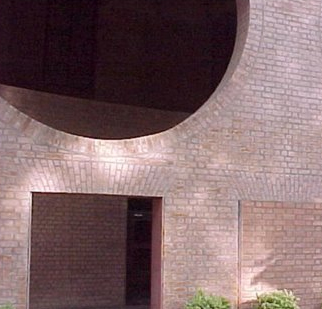 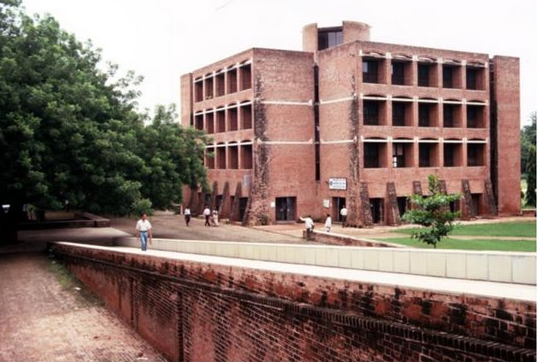 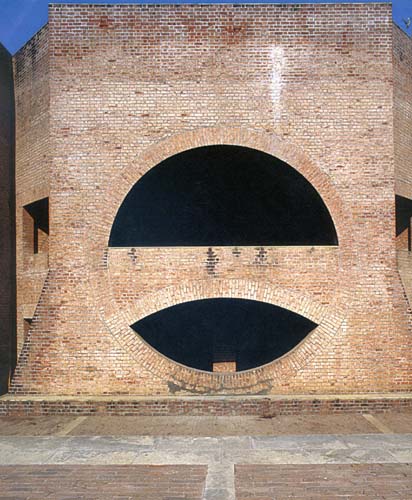 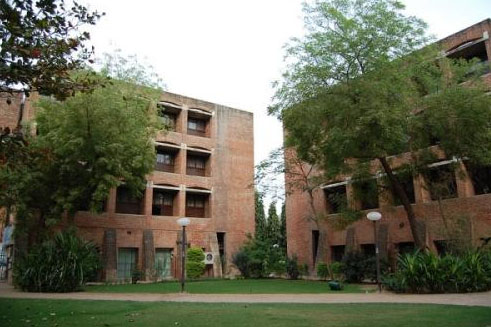 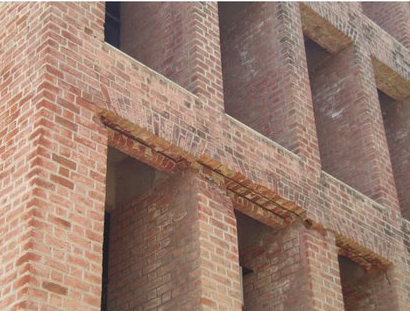