This beach house built for Mr and Mrs Healy, is known by the affectionate name of “Cocoon House”, “House Cocoon”, “Home Protection”. It was made ​​in 1948 by Paul Rudolph in association with Ralph Twitchell and belongs to the group of family houses built in Florida in those years. With this house Rudolph and Twitchell attracted the attention of critics of architecture, for its innovative structure and use of a flexible insulation cover, similar to that used by the Navy of United States to cover ships in peacetime.

It was the first building that gave recognition to Rudolph, upon receipt by it the Award of Merit awarded by the American Institute of Architects in 1950.

This kind of cottage was located along the estuary of the river, near the city of Sarasota, in an adjacent sea marsh, 3575 Bayou Louise Lane, on the island of Siesta Key, Florida, United States.

Despite its independent appearance, the house becomes part of the place, with its deep and intimate scale colors, responding to the surrounding marsh and nearby maglares.

The experimental nature of this house is defined by both the structure and the technology used. Steel belts extending between the walls, guy wires, beams projecting from the floor to the outside and concave-shaped roof suspended. Also the simple design of every detail.

Rudolph entered the Navy at the start of the Second World War, completed his first semester at Harvard University. After a brief training as a naval architect was assigned to Naval Headquarters in Brooklyn. His experiences during the war, from 1942-1946, served as an intern in large-scale industrial construction, an almost impossible in the civil chance. 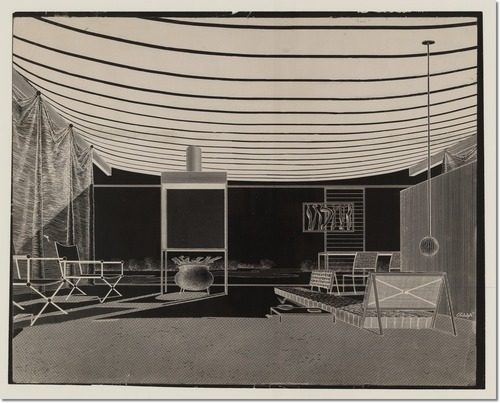 His later projects in Florida have a characteristic lightness and space efficiency and structure that may be considered derivatives of the characteristics of modern shipbuilding. The layers of helmets or ceilings are thin and strong in their flat quality and can take different forms than those for interior partitions boxes in general, whether ships or houses.
Rudolph responded to commands his teacher Gropius led his students: “… what I want is to make young people realize how endless it may be the reaction means if they make use of the many modern products of our time, and encourage these young people to find their own solutions…… ”

The Boarding House Healy is perhaps the clearest example of architecture derived from the technology and ideas Navy built by Rudolph.

Cocoon House was an experiment regarding the transparency of an intimate space isolated from the outside by a new use of wooden blinds. Similar devices were used in the vernacular of the south, to make adjustments climate in the interior spaces. In this case, however, the lattice are used as real walls, introducing a radical conception of space, fully open.

While the Glass House of Philip Johnson and Farnsworth House of Mies van der Rohe, finished at that time, allow the complete observation of their environment, experience is primarily “visual”. The Boarding House Healy, by contrast, involves all the sensory experience of the place, including winds, sounds and smells.

Healy Guest House was designed as a single open rectangular, about 48 square meters for two people, with a terrace overhanging the banks of the river that forms a porch and gives the appearance of floating home on the water. A staircase that descends from this terrace, giving access to the moorings for boats built in the river.

Although at first the architects thought as a unique atmosphere, unique floor was divided into a central area, which serves study, around which flow the other rooms: a large living room, a kitchen and a double bedroom with en suite. All major areas enjoy a splendid view of the sea. 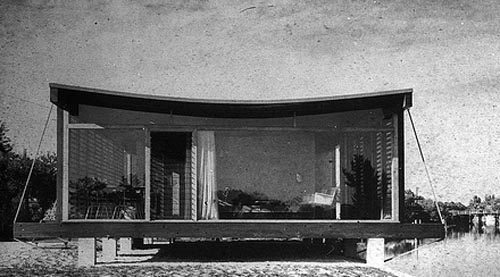 The construction was inexpensive and simple. The house was built on a concrete foundation resting on pillars. On this basis rectangular steel columns supporting a wooden structure on which supports an innovative new type of roof is placed.
The five beams projected soil, metal struts and columns support beam of the long, parallel to the river frontage.
This holiday home with a simple structure and open plan, with its different spaces, was an elegant design with Miesianas features.

The structure was covered with a roof simple catenary, using flat steel belts that extend to the perimeter beams of construction. Later cloth, similar to that of the tents, was suspended on the two long walls and fixed the place with steel cables. This fabric was sprayed with a plastic component it waterproof vinyl wax and protect the interior of the housing, a process that originated the curvature “cocoon” cover.

The roof structure 6.6 meters, supports a tension that allows the walls to carry the water’s edge, becoming an exercise in structural exhibitionism

The material used for the roof, technically advanced, was used by the Navy to protect aircraft and ships out of service after World War II.

Rudolph very often used materials and experimental techniques for their projects. On this occasion he said that one of the design goals was to use the minimum of material and make it as light and efficient as possible.

The perimeter walls were made with wooden blinds that modify the perception of the outside at any given time. The wall is completely open can happen to be completely closed, excluding the outside and creating sense of protection, with the simple movement of their lamas. Subsequently acristalaron the sidewalls.