Christiane Lange, art historian and curator of Projekt MIK invited the Belgian architectural firm Robbrecht en Daem architecten to create a temporary “architectural object” using a series of historical sketches of the project that were discovered during the investigation on the File Mies Van der Rohe of the Museum of Modern Art New York (MoMA)

Founded in 1930, the Krefeld Golf Club had found a place for golf in Egelsberg hill on the northern outskirts of the city. What we lacked was a clubhouse. For its design in the summer of 1930 the club organized a contest inviting the Berlin architect Mies Van der Rohe, then director of the Bauhaus and vice president of the German Labor Federation (Werkbund) and local architect August Biebricher.

Mies designed a spacious house on one level, seated on top of the natural elevation of the hill. Its large panoramic windows have provided visitors with a breathtaking view of the surrounding landscape.
Mies provides detailed plans and perspective drawings are kept well preserved and can be found in the Archives of Mies van der Rohe’s Museum of Modern Art in New York. Because of the Great Depression, the founders of the golf club failed to cover construction costs estimated 150,000 Reichsmark, about $ 36,000 at that time. Mies received his fee of 500 Reichsmark, but the house was never built. The plans show that the clubhouse would have been one of the most spectacular works of Mies van der Rohe. Today, the building would not only be an excellent example of the international style, also it reflects the mature and superior language of forms handled by Mies van der Rohe.

“… I think the influence of my work on other architects comes from its delicate lightness. Everyone can use it without imitating, it is objective, no matter who did it… “(Mies van der Rohe, 1959)

Around the industrial city of Krefeld, Germany where Mies the same year built the Lange & Esters House, the study Robbrecht Daem architecten made ​​to design a temporary pavilion Mies in 1930. The place chosen for installation It was the same that had been selected in the original project.

The temporary pavilion was built life-size 1: 1, based on the conduct Mies to design the clubhouse of a local golf course and that was never built as a result of the Great Depression.

The temporary installation by Robbrecht en Daem architecten could be visited from 27 May to 31 October 2013.
Installation of 84x 87 m is mainly built with wood. It is conceived as a life-size model whose abstraction emphasizes the essence of architecture Mies and spatial concepts. Along with the construction of the Lange & Esters House, characterized by its volume and classical brick floor, the Pavilion exemplifies the evolution of Mies contributed to Modernism.

The structure is mainly composed of an open space which is loosely divided by wooden screens and stainless steel columns. Offices, locker rooms and staff rooms are placed along the eastern side of the plane, with a canopy that projects into the landscape.

The structural steel skeleton, the proportions of walls and spatial composition correspond exactly to the original plans of Mies.
In this play all the walls that do not provide support are wood, no details whatsoever and adjacent areas are no more than a sketch. Only steel struts with cross-shaped contour and chrome housing were built in detail as reference material to aesthetics Mies van der Rohe. 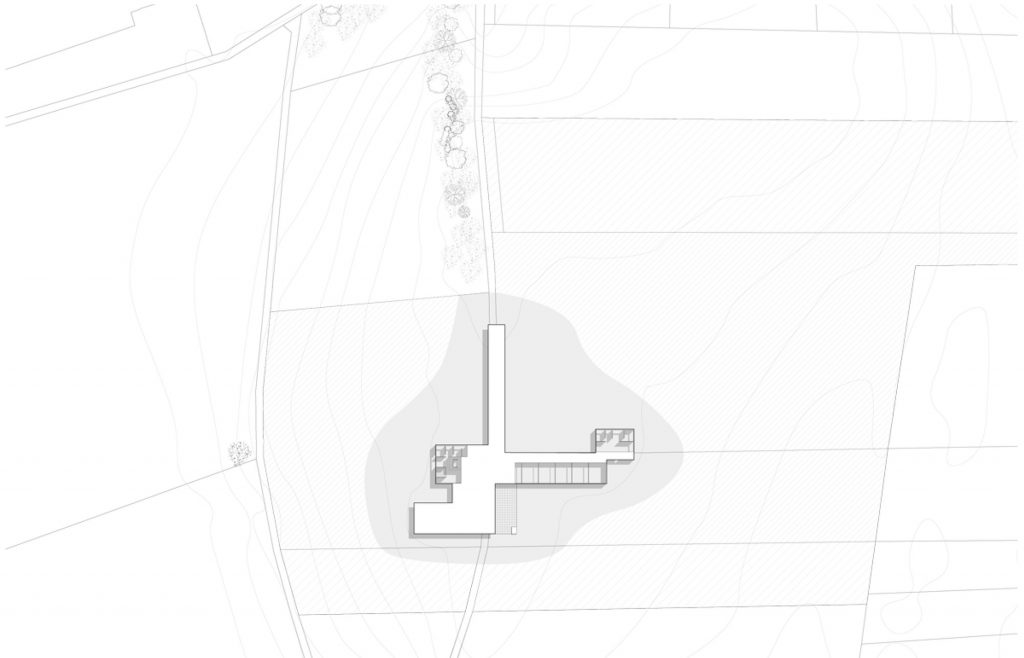 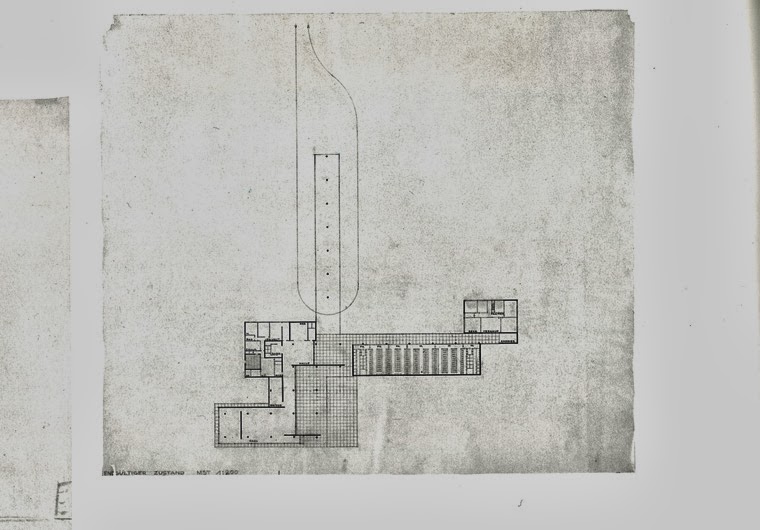 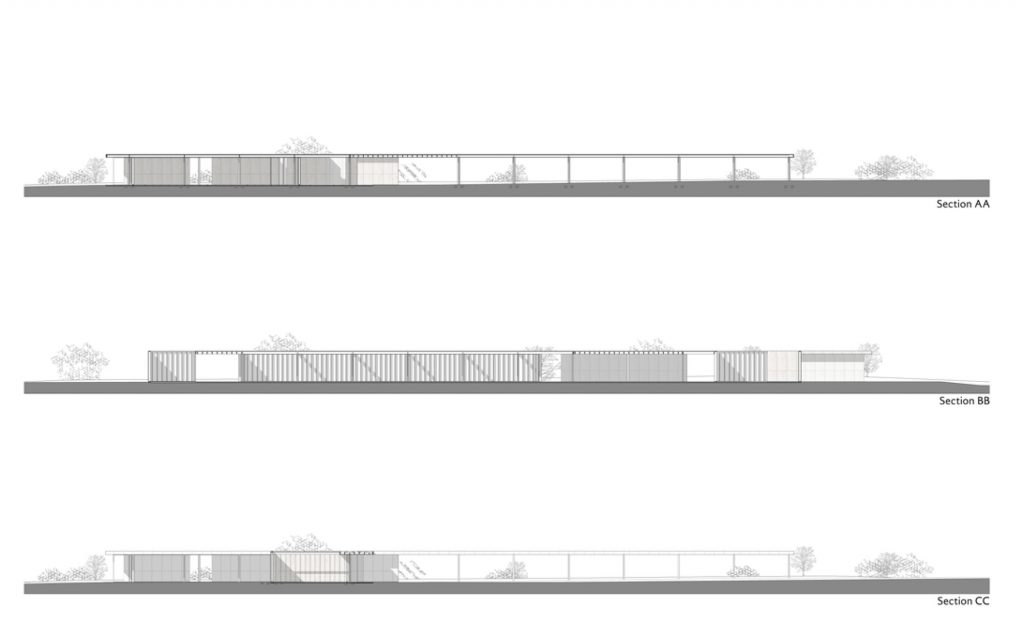 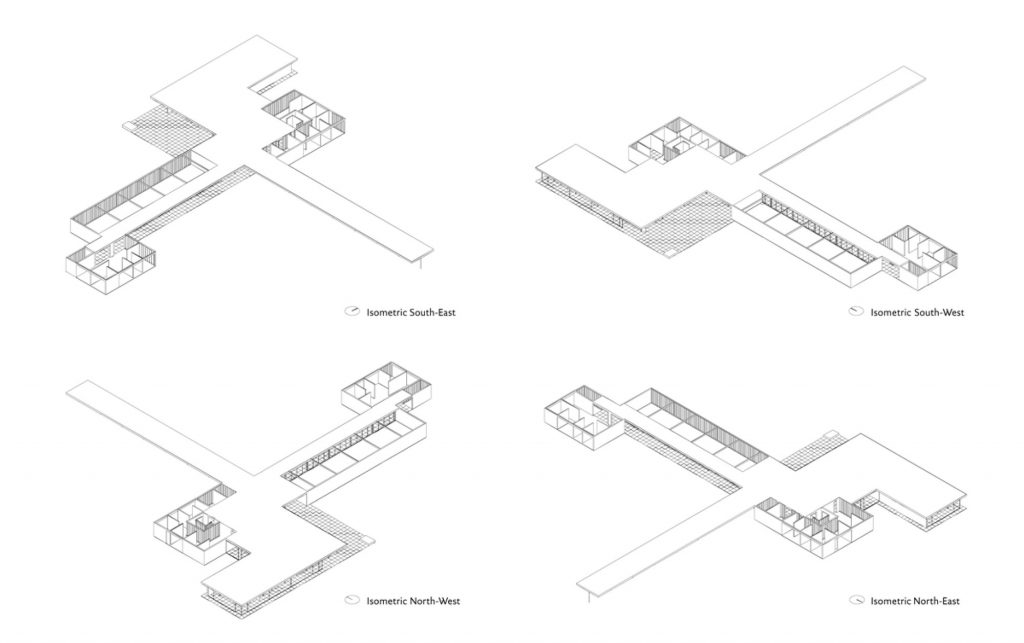 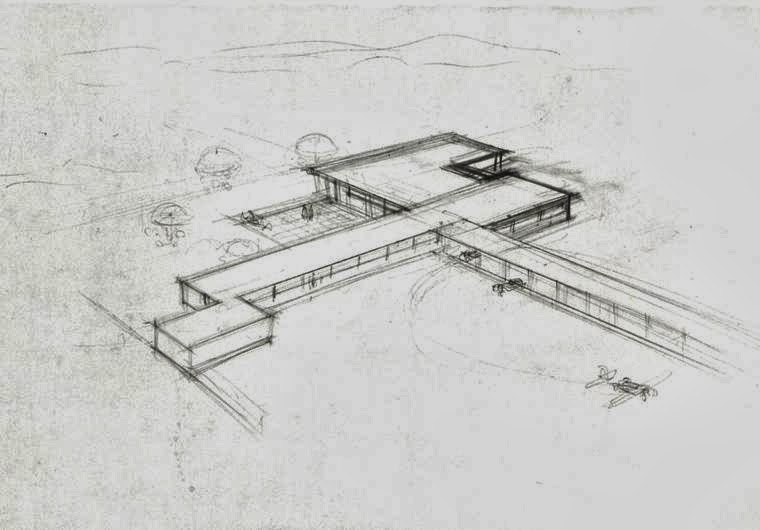 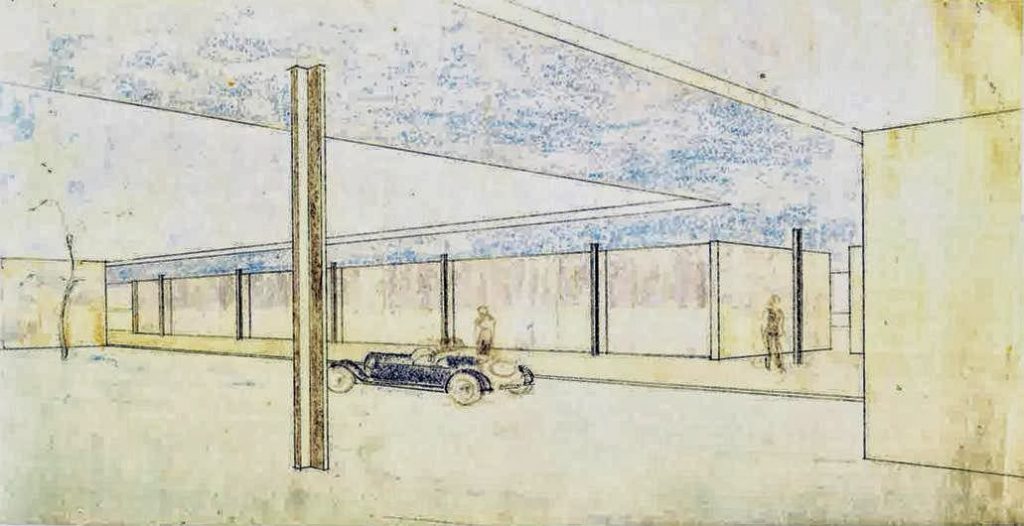 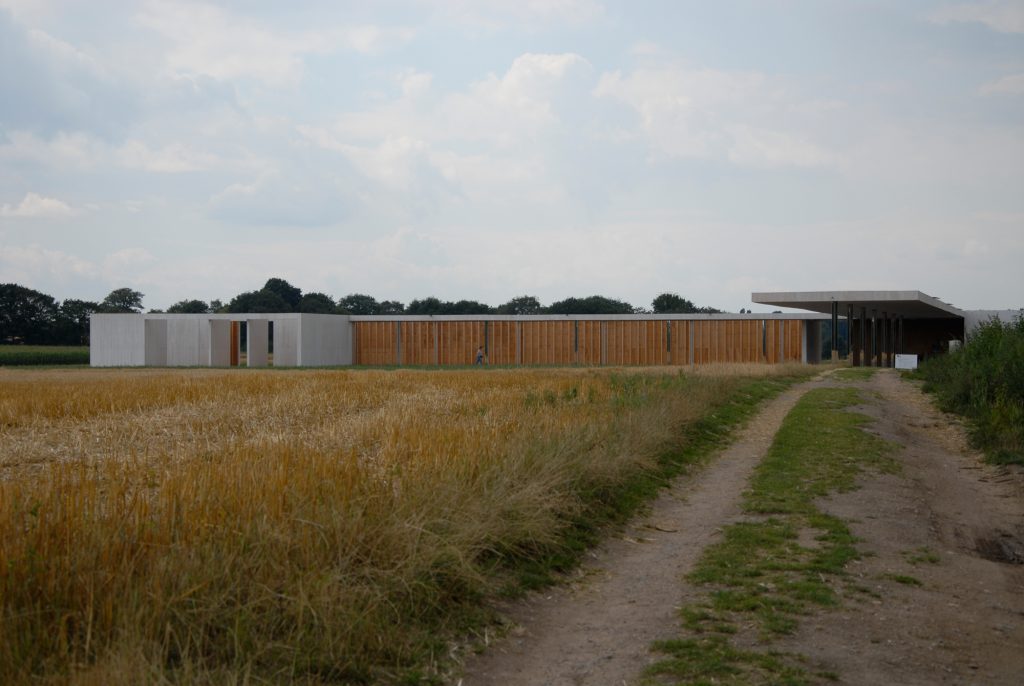 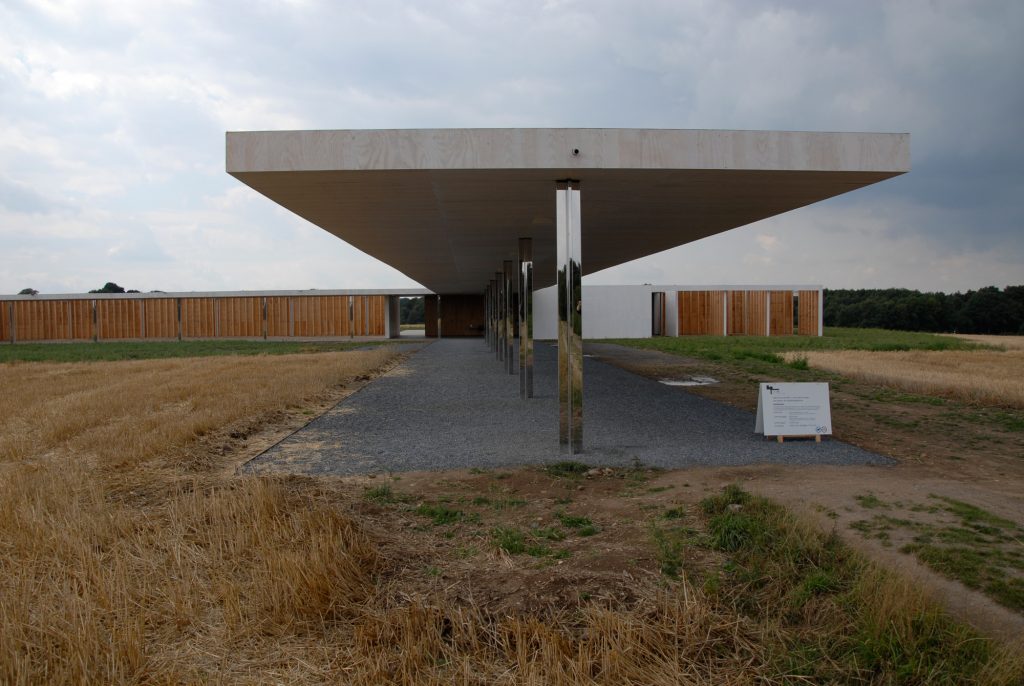 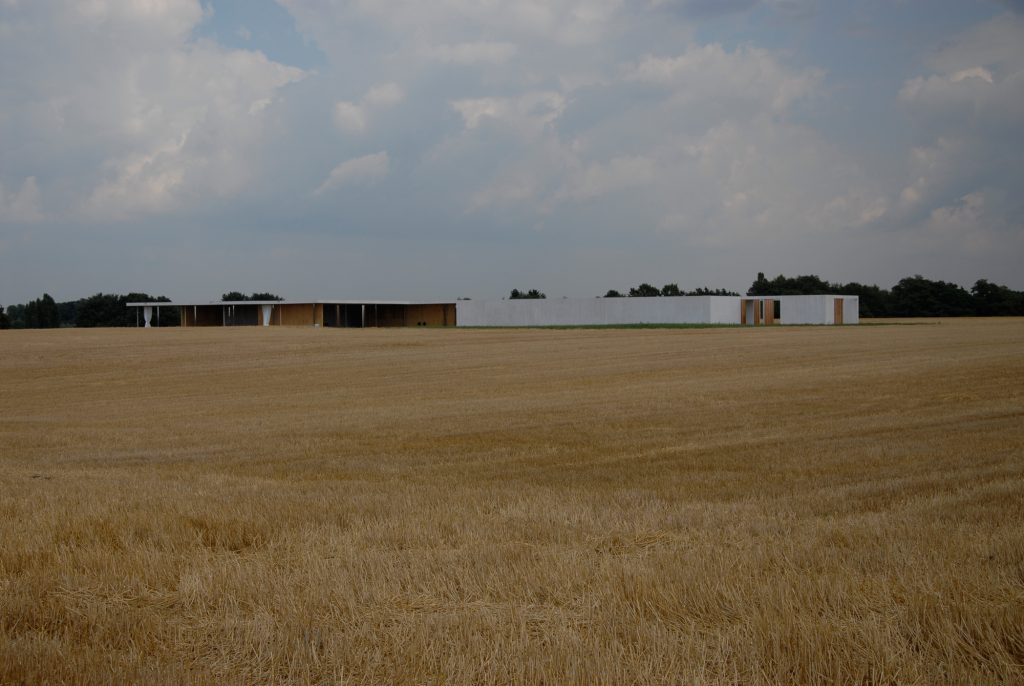 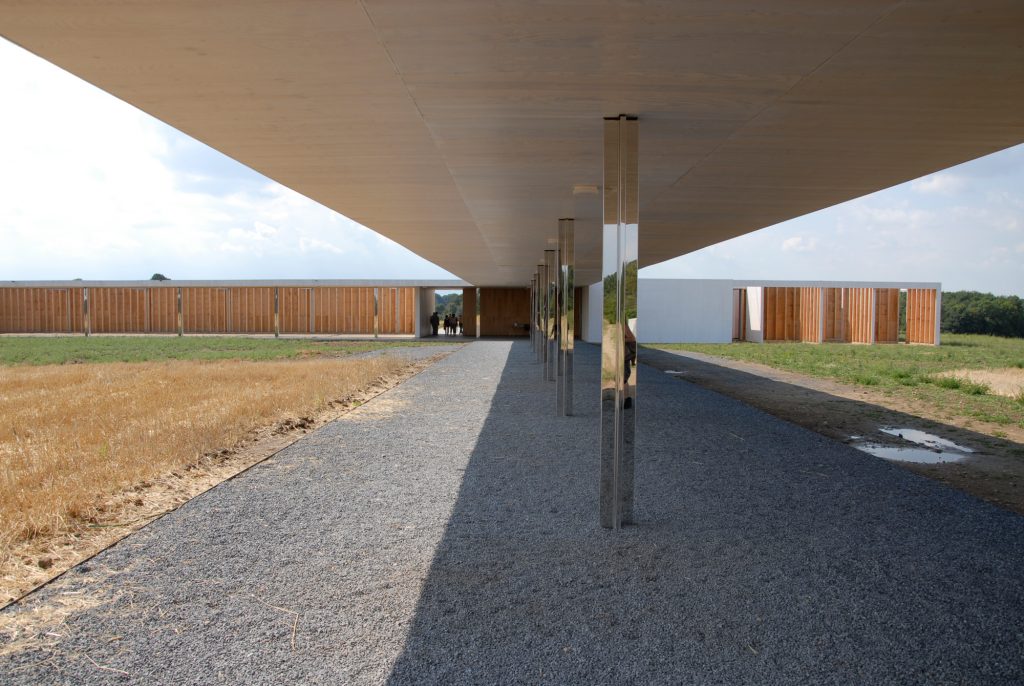 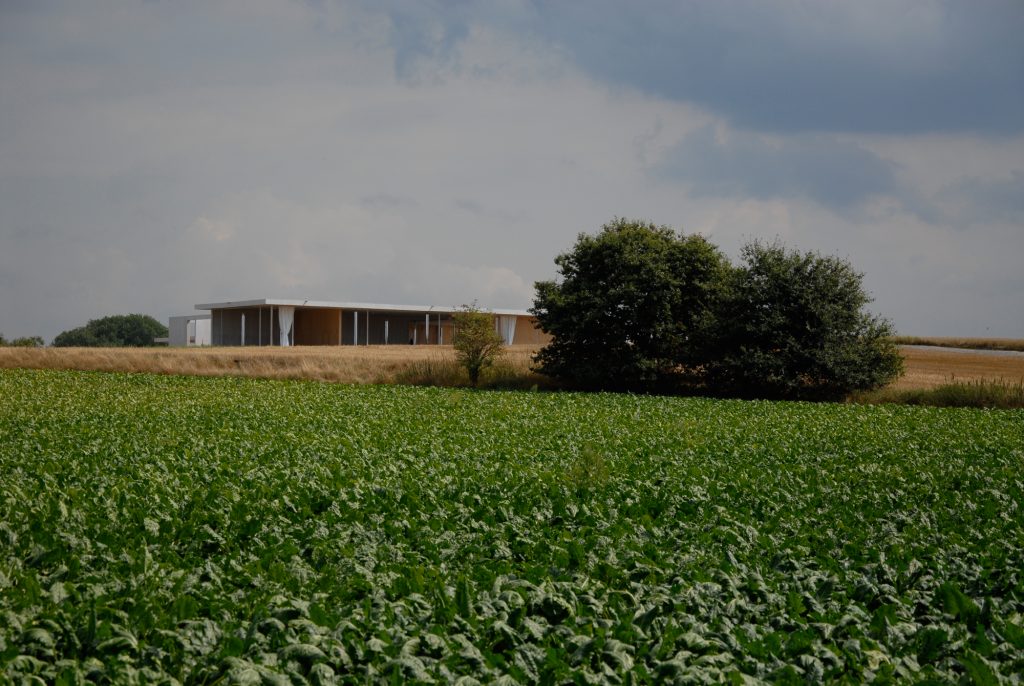 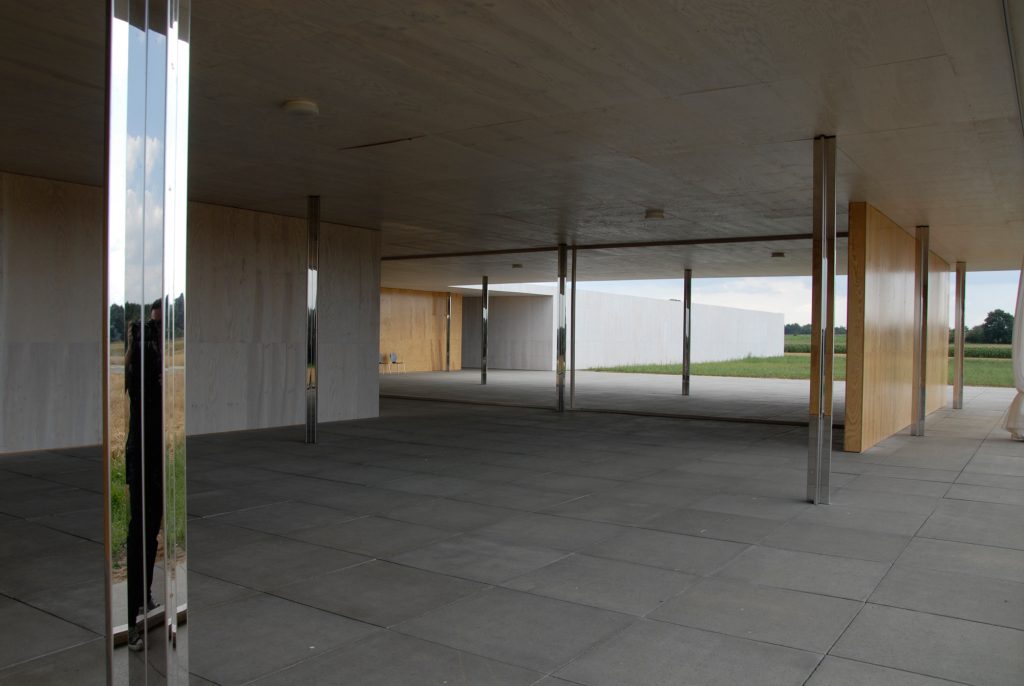 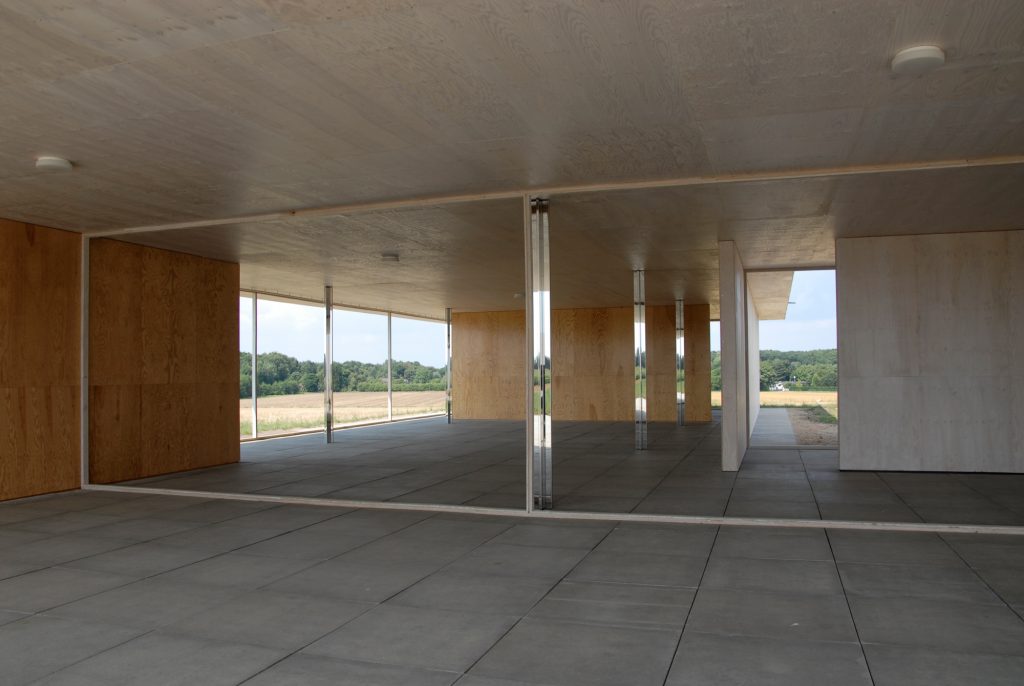 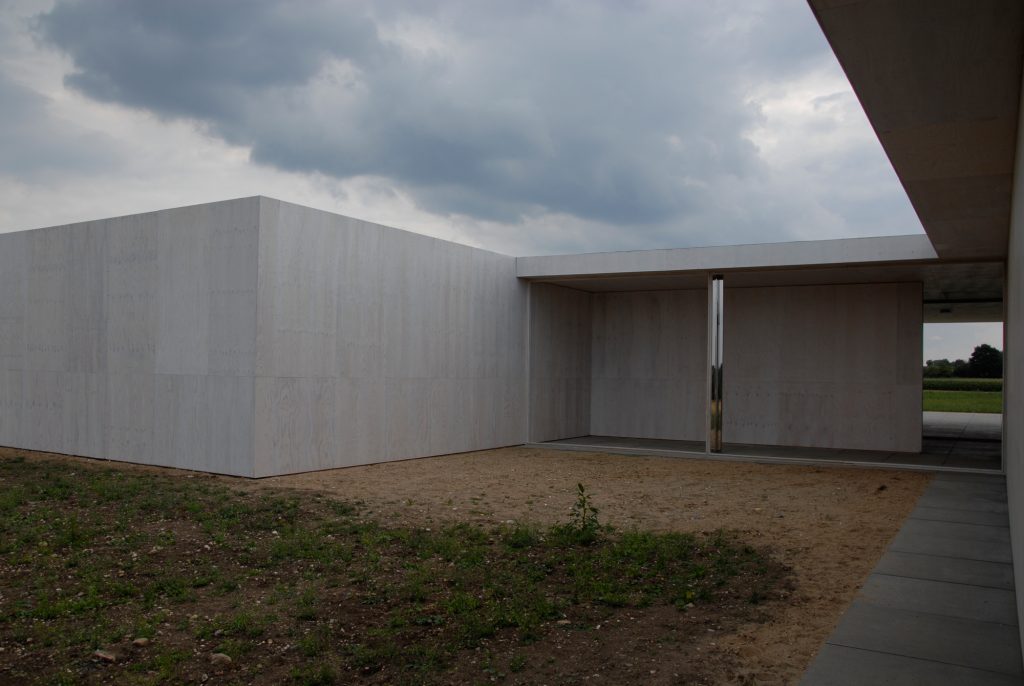 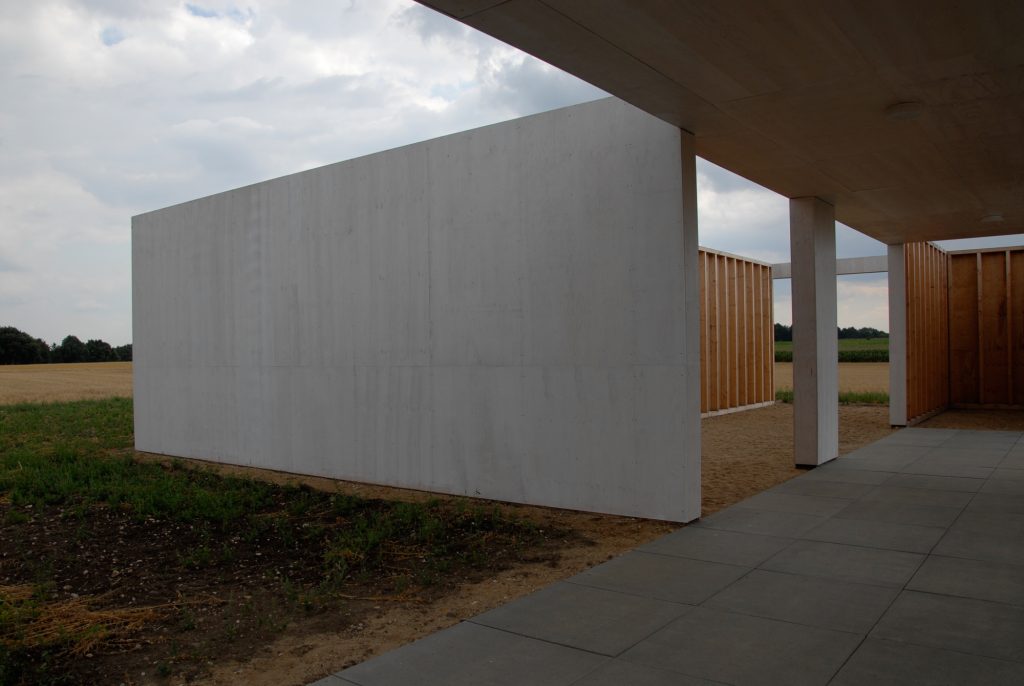