Glass Pavilion at the exhibition of Werbund

German Werkbund was an association of artists, designers and architects that preceded the Bauhaus to it, among others, belonged Bruno Taut. In the statement of Colonia 1914, the Werkbund provided an architect’s work, Glass House, a successful fusion of technical and commercial aesthetic elements. During the exhibition, the architect made ​​numerous debates explaining new concepts of modern architecture, and the Glass Pavilion became the best example of the same. After the exhibition, the building was demolished because it was not built for practical use, but specifically for the exhibition.

The building was designed by Taut and Paul Scheerbart poet, whose verses adorned the base of the dome on its outer side.

The German Werkbund members of the group, particularly Taut, were convinced that light and transparency were the main features of an ideal architecture of the future. This project was a first attempt to give form to that ideal.

The interest Taut demonstrated in the spiritual aspect with the use of glass, transparency and light, explored more intensively during World War II and later in his book Architecture Alpina, was stimulated by writer Paul Scheerbart who advocated a paradise land, based on the new architecture of glass and color.

The Glass Pavilion is one of the buildings that best combines ancient tradition, represented by its dome and appearance of the temple, with the modern tradition highlighted by the materials used.

The design was an explosion of color with an interior whose floor was glass and the walls and windows decorated with mirrored mosaics. Information on the glass industry which sponsored the project was also included.

The dome targeted feature double glass pavilion rests on a circular plan in which 14 lintels rise mid-rise with side brackets framing the same number of glass walls. In the concrete structure of the façades had plates inlaid with colored glass acting as mirrors.

Taut described his little temple of beauty as :

“… The reflection of light, whose colors are initiated at the base with a dark blue and rise through moss green and golden yellow to culminate at the top with a bright pale yellow color… ”

An inscription of P. Sheerbart served as introduction to building, which the poet himself understood as the origin of a new architecture: ” Architecture of Glass “, title, moreover, also one of his works published in 1914.

Its interior is divided into two floors

The two outer stairs led the visitor directly to the top floor. Inside, the color effects produced by sunlight looked enhanced by reflections from the pool and waterfall that ran on an existing yellow glass on the lower level, visible through a circular opening in the floor upstairs.

This plant is descended on both interior stairs enclosed between glass walls, reaching to the ground where the pool is opened and began its journey waterfall.

The cascade was carried out with yellow crystal, with seven levels for the pool while a complementary color, purple was used.
A mechanical caledoscopio projected images, a first version of a light show, intensifying the overall impression of the visitor.

The structure of the Pavilion was built on a concrete pedestal, whose two entrances on both sides of the building are achieved up two flights of stairs, which gives the same appearance of the temple.

Glass walls are capped by a perimeter concrete lintels over which the double dome prismatic glass skin reflected in prisms forms the interior and exterior colors supported. This dome -like pineapple is a multifaceted polygonal structure whose concrete ribs allowed to develop a rhombic structure of thick glass blocks, it was the first time it is used in a work of great importance. In domestic architecture were first used in 1912 by Peter Behrens in House Wiegand 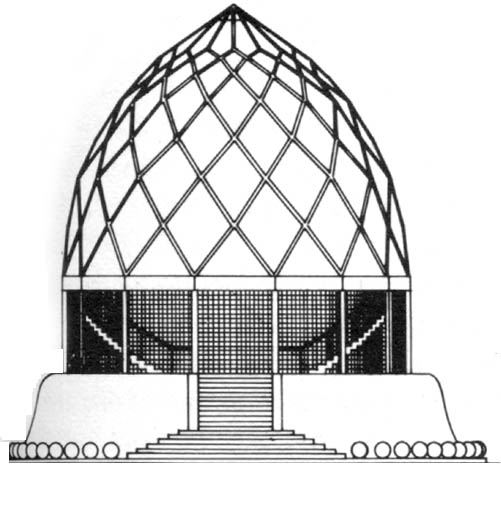 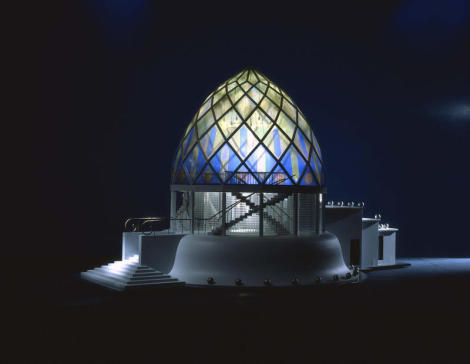 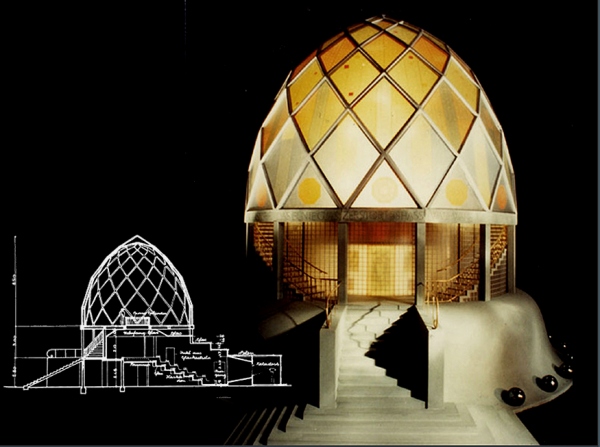 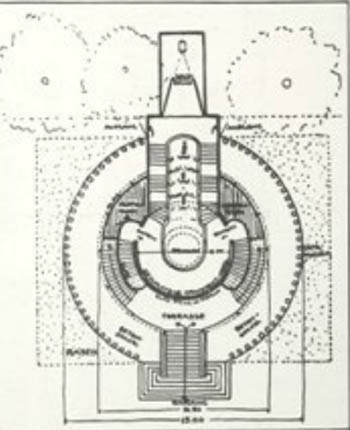 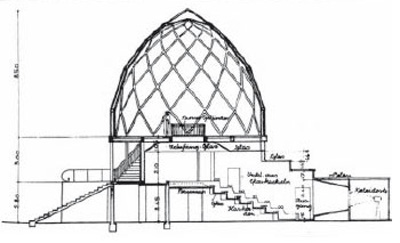 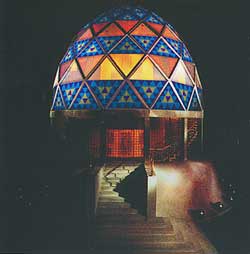 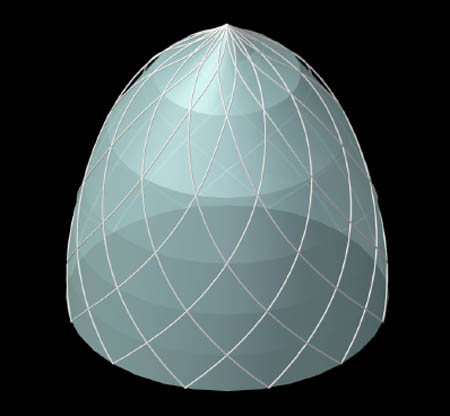 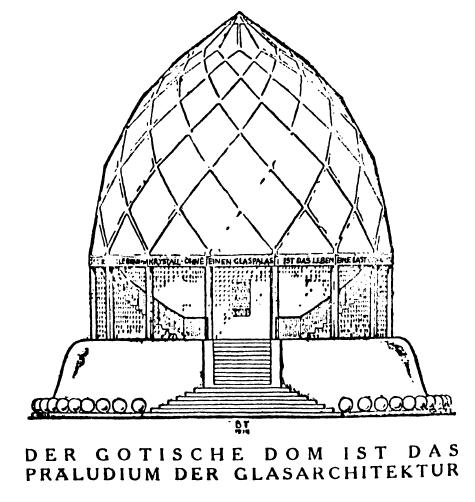 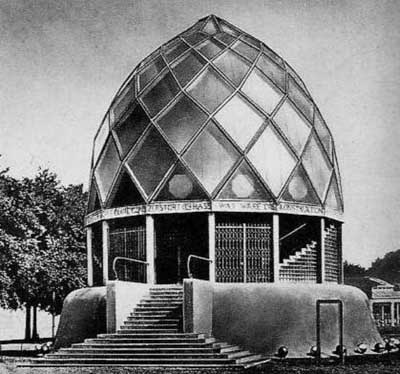 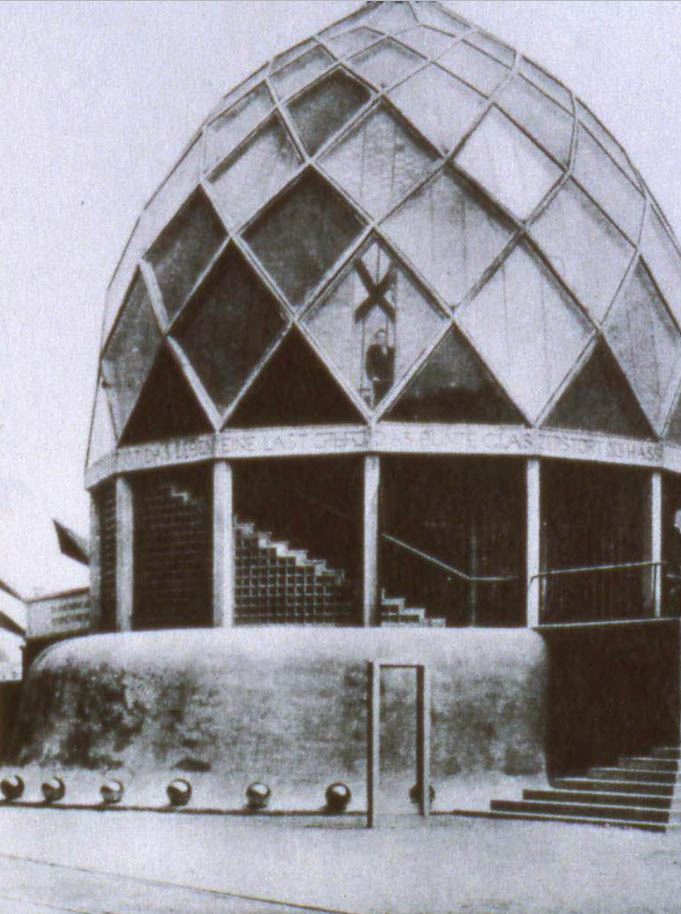 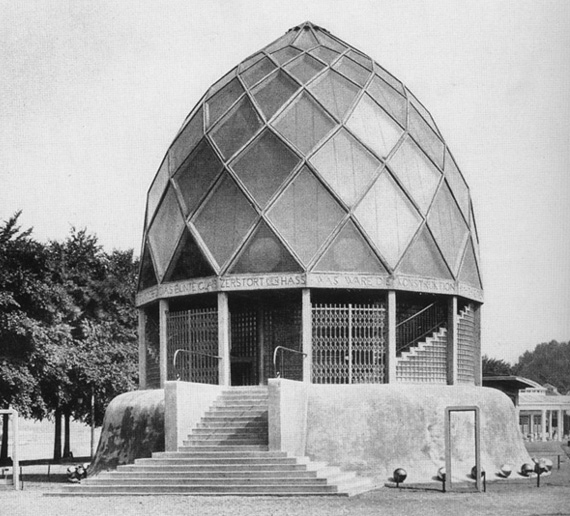 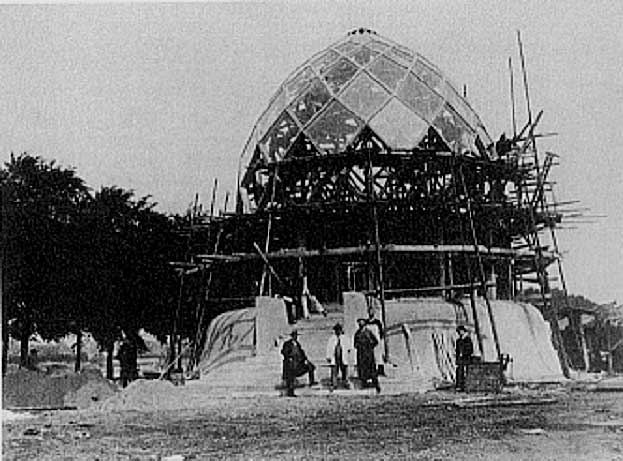 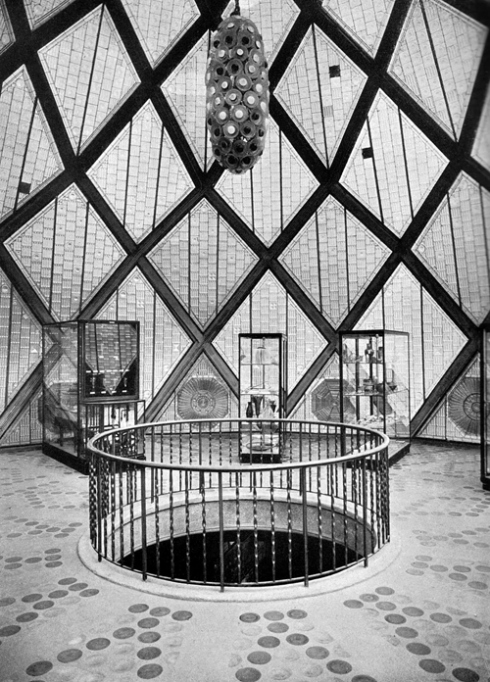 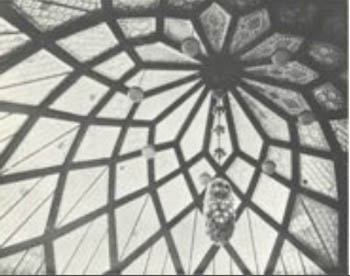 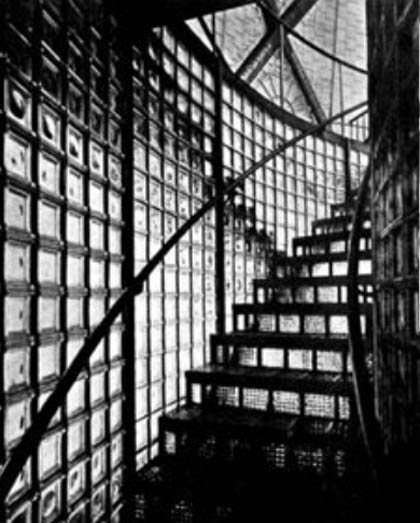 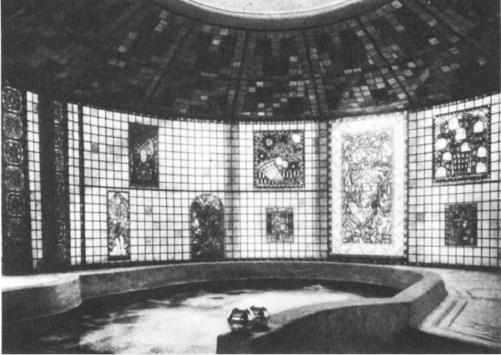 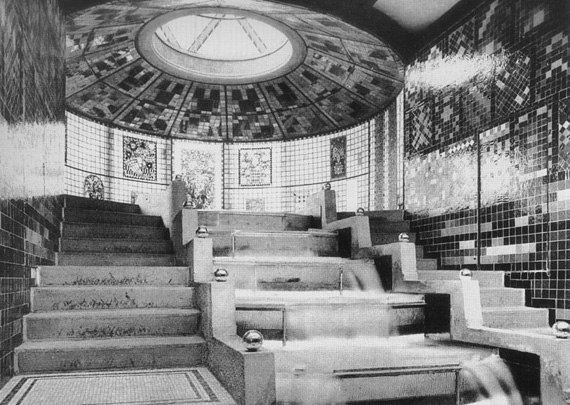 Glass Pavilion at the exhibition of Werbund