In 1911 Theodor Wiegand, renowned archaeologist of the time, the Behrens instructs construction of your home. Wiegand was the first archaeologist who worked digging homes participating in the excavation of many classic cities and studying them as interrelated set of buildings. In 1911 he was appointed director of the Altes Museum built by KF Schinkel. All these details that influenced chose to Behrens as architect of his house, with his demonstrated interest in classicism in general and Schinkel and great admirer of his work.

The Wiegand House in neoclassical style brings together elements of classical antiquity as the peristyle located at the entrance and surrounded by columns, with technological innovations such as glass blocks used in the roof of it.

Later the house passed to host the headquarters of the German Archaeological Institute since 1973, joined the architecture section.

Wiegand Villa sits on a rectangular field with a steep slope that descends from the house to the street through a garden terrace, stairs, halls, also designed by Behren. Three sides of the ground facing the street and the main entrance is by Peter- Lenne Strabe 28-30/Drygalskystrabe, Dahlem, Berlin, Germany . 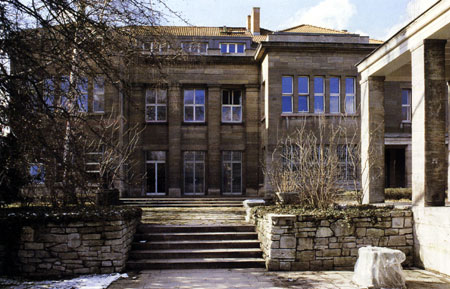 The main building is at the end of a central shaft materialized by a band of constant width plan, covering both the garden and the central bay of the house and gone to the other end.

The plant is configured from a rectangle partitioned into three bays by the geometric continuity of the longitudinal band moves outwards the peristyle initiating a total displacement of order entry is not done by the shaft, but by a bend 90 °, on one side of the gantry. The building is two stories with a low roof and attic cornice that surrounds the entire perimeter. On the side walls the center window has access to a balcony and come with white shutters carpentry.

The facade facing the garden alludes to Greek architecture governed by an order made ​​by pilasters, architrave and denticles. The courtyard and the stairs are covered with stone.

The house is composed of three parts:

A U-core in which the main spaces are distributed to the garden is open, letting in plenty of light through large windows in both the central part and two wings that is divided.

The main room of the house is located on the ground floor of the U which consists of coffered ceiling. The room opens to the garden with three large windows that give access to balconies. One side was assigned to the office and the library of the homeowner and the other an antechamber leads to the dining room which has the highest ceiling center.

On the upper floors the bedrooms were located. 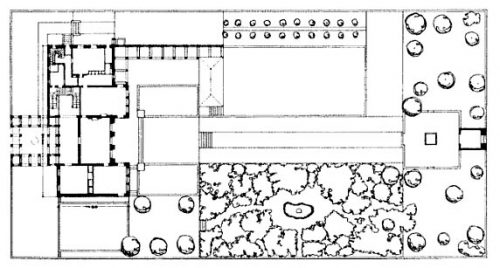 This outbuilding service spaces and guest room followed by a long porch that leads to the tennis court are located.

A third body is formed by a private porch where you find the main entrance, which does not open in front, but from one side and a small garden inside, recreating a typical Pompeian spatial scheme.
This gate, treated by the architect as a peristyle which opens directly onto the sidewalk conditions the main facade, dividing the building into two sections clearly differentiated by the size of your windows and do not overlap exactly with the other two parts.

The central axis that develops in the plot does not translate into a sequence of rooms inside. Once through the main entrance you have to take a close stay that chains with a wardrobe, staircase and make several turns before reaching the central room.

Although Behrens was based on a classical structure for the design of the house, changed the original by making the garden participate actively in the composition of the house concept, the house is not housed in the garden, but part of it sharing numerous halls, stairs and terraces.

Although the slope of the plot, not the construction placed on the top, but moved to the street level leaving the back wide open to be enjoyed by the occupants of the dwelling space, investing in this the classic way by the villas.

For coffered ceiling inside the entrance atrium architect first used in domestic architecture, glass block ceiling.
The facades are covered with rectangular blocks of limestone. On the street facade highlights the many tall windows with white woodwork and shutters in one sector and the other cut on the stone. The exterior roof but has many twists on was covered with red tile

The study and the library are covered with panels of red cedar wood and the antechamber of the living room is coated both on the walls and ceiling paneled rococo belonging to the private collection of Wiegand who brought a large collection of antiques found during their excavations, especially in the ancient cities of Priene and Milet, and Behrens knew how to integrate into the house.