The house that John Lautner built for designer Arthur Elrod in 1968 interiorismos always have the appearance of a “super modern cave” with incredible architecture. So I believe the producers of the famous James Bond film “Diamonds Are Forever” that chose to film some of the clips. At other times, instead of being taken into account as an embodiment in which it was shown that Lautner put emphasis on relating space and nature, the house was considered a symbol of the excesses of Hollywood, concept against which the architect fought for more fifty years, fought against pure commercialism and the passing fads of Los Angeles.

This monumental building organic shapes that Lautner preferred to call “living forms” was defined by its architect as a “timeless architecture” and contains many of the architectural features of Lautner: a difficult place, a modest entrance concealing a shocking inside and stays that flirt between inside and outside.

Since 2003 the house is available for rent for special occasions or seasonal holidays.

This iconic house is perched on a high end Southridge in 2175 Southridge Drive, California, United States, and is easily visible from Palm Springs. The living room has a panoramic view of Mount San Jacinto, Mount San Gorgonio and the valley in which it is located.

Like any work of Lautner’s Elrod House was designed especially for those who were to inhabit and the architect was challenged to create a building in which to live and develop without being prisoner of the same, a “real architecture” to increase the quality of life and where they enjoy light and freedom. This objective was achieved with the development of a large central room, deep in the rock under the weight of the concrete deck, the edge of which presents to the viewer a curious silhouette landscape that sometimes is introduced inside the house.

“My clients are all individuals with enough personality, otherwise they would not come, simply would do what the” status quo “imposes convention. My solutions are not at all conventional “(Lautner) 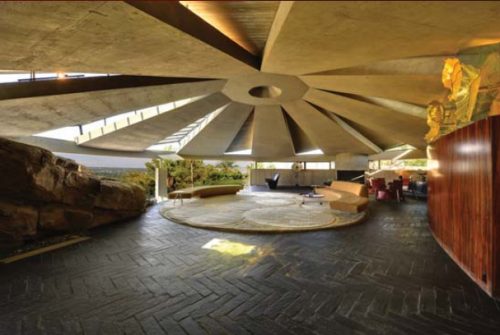 One of the things that is striking in this house consists of the huge concrete curved roof formed by a conical dome covering nine triangles inclined circular living room and extending to cover the pool that unfolds between inside and outside the house, the walls of the house are also curved. The appearance of cave inside the mountain that offers construction due in part to the excavation, is reinforced by the rocks that were left in the living room while “modernity” is present in the façade north, all glass, with a motor that opens the glass completely creating the impression that the exterior has entered that part of the house. Its rugged enclosure and the site chosen to build it remind Malin House or Carling House, also the architect.

Soils were excavated lowering the mountain rock so some rocks are at the same height of the roof of the house.

The main output through some steps, very similar to the roof structure, leading to the terrace where the pool is hidden behind a rock. Another staircase descends from the terrace to the slope of the mountain. The main entrance is through a courtyard which is at street level. 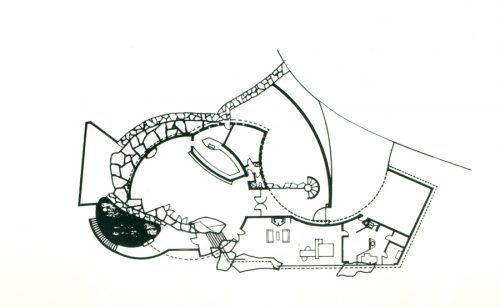 The facility includes a kitchen, separated from the room by a long, curved wall, a dining room, a bathroom and a living room. Originally had two bedrooms of which only one was preserved.

In the master bath sunken tub was placed on the ground and exposed to the outside, separated only by a glass wall but is protected by the remoteness of the place and a natural rock

Both the guest house as servants’ quarters were added two years after it was finished building the house. These dependencies are down a spiral staircase from the pool deck.

When the new owner bought the house in 2002 made reforms and added a gym, a pool room, sauna, five bedrooms and five bathrooms.

The circular structure, with 18 meters in diameter, in the living room is freestanding and conical roof with skylights opens triangular shaped “desert flower” consists of nine petals, whose chamfers underline the thickness of the pieces. These angular elements that protect the strong sun of the California desert, like all the concrete structure, were performed by a contractor who worked for Wright, Waly Niewiadomnski. Contrary to the volume of the dome, the edge beam in the base housing delimiting the pavement contrasts with the thickness of the cover causing it look like a raised top

With the construction of the Elrod House, John Lautner proved himself a master in the use of concrete. From this work which applies large openings and make space advantage and discovering the expressiveness of the material, Lautner be inclined to extravagant, flowing forms. 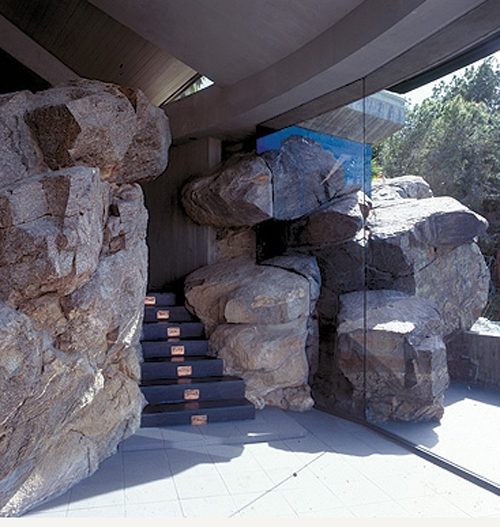 The floors of the living room are dull black slate cut into rectangular pieces and placed that resembles a wooden parquet.

The numerous rocks that have been left in the living room becomes part of the materials that make up the house, either from a decorative standpoint, structural support, or in some cases, like the bathroom, protector. It is another way to allow nature and the environment from entering the housing.

The crystals are inserted directly between the rock and concrete structure, eliminating the carpentry while creating a corrugated sleeve which is adapted to terrain variations and different floor levels.

The spacious master bedroom has a bar counter lined with carefully selected exotic wood. The large closets are lined with cork.