This home, built in 1960 may be the solution to a construction in steep terrain, slope of 45 degrees, hardly accessible, leaving almost intact the surrounding landscape and environmental impact. At least it’s a work that invites reflection and avoids conventional excavation of the mountain, the retaining walls and the increased cost of the project

Due to the low budget available to the owner sought sponsors to carry out the “world’s most modern home” as he called the Encyclopedia Britannica of the time. It cost $ 140,000, of which Malin paid only 80,000, the rest was contributed by the gas company “Southern California Gas” and “Chem Seal Corporation” which inspired the name of the house “Chemosphere” and both experimented with different types of resins, glues and coatings during construction.

Malin personally, along with three workers, was responsible for the construction that lasted 18 months.

The Taschen, new owners of the Chemosphere in 1977, commissioned the house recovering after years of neglect, the architect Frank Escher who introduced details and finishes designed by Lautner at the time but at the time it was built were impossible performed either by budget or simply a lack of technology.

Built on a steep hillside in Hollywood, California, one side overlooking the San Fernando Valley, other mountain, detail highlighting its new owners, the family Taschen…. the magnificent location of the house, located between the countryside and the city. What can have very different feelings from both sides of it. From the side facing the San Fernando Valley, is the great city, houses, skyscrapers, Highway 101,… While on the mountain that faces feel the nature and animals.

As in many of his works John Lautner geometry used in this project, becoming an example of the architecture of the time in the Los Angeles, where a house had no reason to pretend to be. Although Lautner for his designs had little to do with this trend, always tried to integrate the buildings with the environment, creating an organic flow between the interior and exterior, humanizing built spaces and respecting the environment. 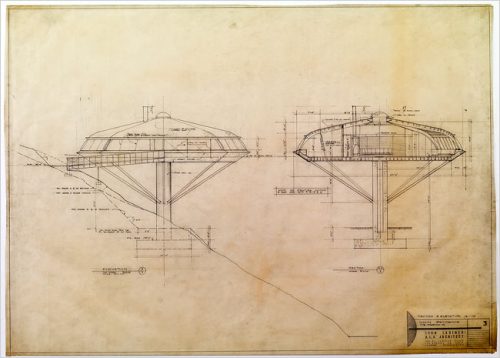 Raised up on a single central pillar reminds her figure some water tanks, watchtowers or any communication tower. When Lautner saw the sun, drew a straight vertical, one horizontal on top and a curve on it. “Draw it up here,” said his assistant.

A house of 205 square meters, of octagonal shape and whose rooms are distributed on the same floor, accessed via a bridge from the side of the hill, where the structure is almost at ground level which is reached by a elevator from the garage below.

All surrounding the dome floor around the perimeter thus protecting its inhabitants from the sensation of floating due to the height and shape. The lower perimeter edge houses built in wardrobes, a sofa and a balcony built. Sturdy curved beams, sloping ledge of the windows, which becomes planter on the terrace area wardrobes and windows, create the impression of a mass composed of wood and glass in which it is difficult to distinguish the transition between interior and exterior. With its strong inclination, crystals almost completely prevent light reflection reinforcing this perception.

The appearance of “flying saucer”, as has also been called to the house, is given by its structure, in this case is the structure that determines the form.

The upper structure is constructed with laminated beams subjected to a compression ring in the central steel upper platform deck and all eight arms rests on steel on a single supporting concrete pillar diameter of 6 meters and height 8.7. The bottom perimeter fence surrounding the house is also a component of the structure. Despite its seemingly fragile appearance has withstood several earthquakes and torrential rains.

For the pillar concrete base is used, the holding arms are steel platform, like the compression ring which is joined laminated wooden beams making up the rest of the structure.

The roof deck joints were sealed with epoxy to prevent leaks and get isolation. The large crystals were also sealed with fixed chemical, below ground and applied a layer of insulating material. In its construction Chem Seal Corporation tested the new chemicals and resins such as roofing materials.

Lautner designed a system of filters for air intake coming through the bottom of the platform and once walked the perimeter is expelled through an outlet located at the top of the cover by a dome that could open and close.

The house has a security channel for washing outside the large windows.